All change in Spain

Vuelta Stage Report: DSM’s Michael Storer won stage 10 in a solo attack from a big break. Intermarché-Wanty-Gobert’s Odd Christian Eiking finished just behind the Australian to go into the red jersey. Primoz Roglič (Jumbo-Visma) finished in a chase group, but lost his lead.

Stage 10 of the Vuelta a España was won by Michael Storer. This was the Team DSM Australian’s second stage win in this Grand Tour. A big break of more than thirty riders was escaped to fight for the stage victory and the red jersey. Primož Roglič and Jumbo-Visma gave the leading group more than 13 minutes, which allowed Odd Christian Eiking (Intermarché-Wanty-Gobert) to take the overall lead.

Technical director, Fernando Escartín: “Completely flat stage, except for the final stretch. If a successful breakaway takes place, it will make the leaders’ teams and sprinters work hard. The Almáchar mountain pass (a 2nd category climb) is located 15 km before the end of the stage and will make the riders descend very quickly towards the finish-line at Rincón de la Victoria.” 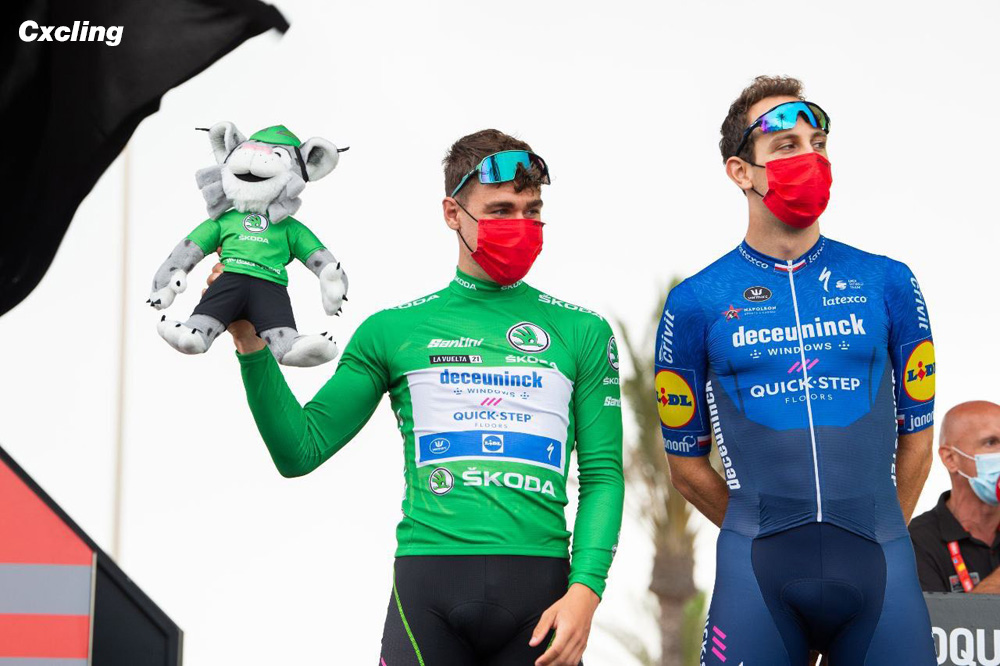 Maybe the finalé of stage 10 is a bit hard for the pure sprinters? Jakobsen still in green at the stage start 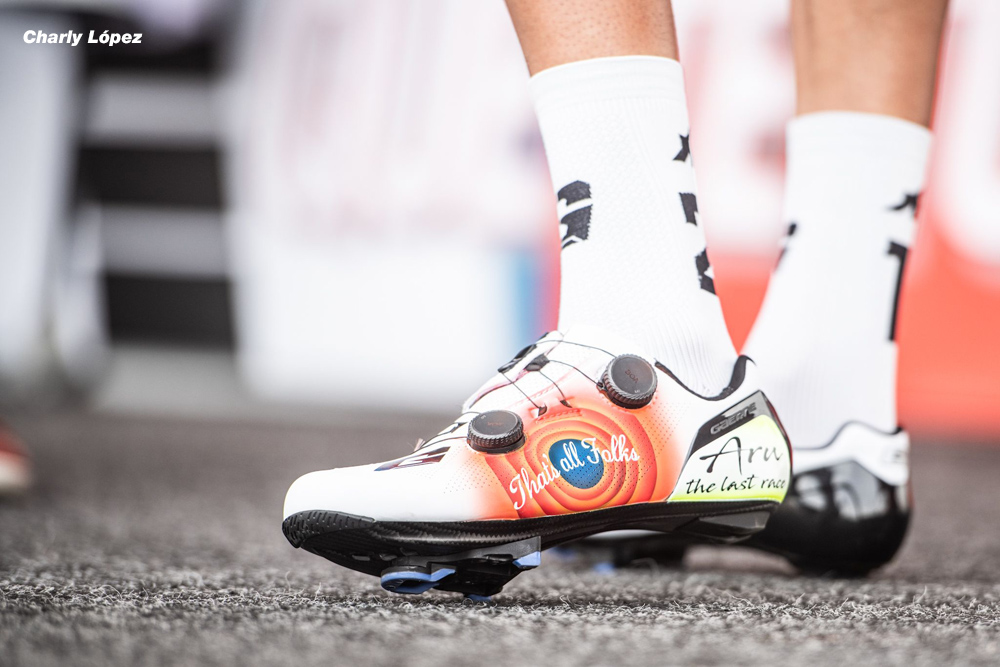 The start was crazy-fast, partly due to the strong tailwind, it took a long time before the leading group of the day was formed. The stage passed along the Mediterranean south coast and was fairly flat, but there were still quite a bit pf climbing. It was on one of rises that the break of the day emerged. This happened after almost two hours of racing at an average speed of more than 48 kph. 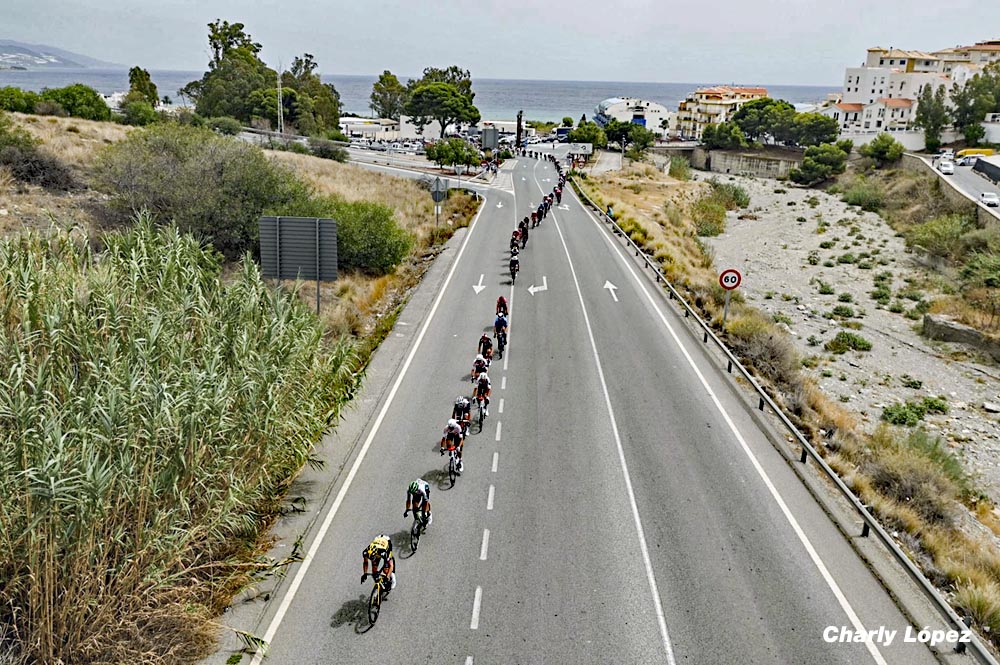 A fast start due to the tail wind

There were 31 riders in the break, of which Odd Christian Eiking (Intermarché-Wanty-Gobert) was the best placed at 9:10 from the red jersey. Primož Roglič’s team had no riders in the break and so kept an eye on the front group. The leading group quickly rode away from the peloton taking more than 5 minutes. This lead grew because Jumbo-Visma was not interested in a chase. Fifty kilometres before the finish the difference crept over 9 minutes and Eiking moved into the virtual overall lead. 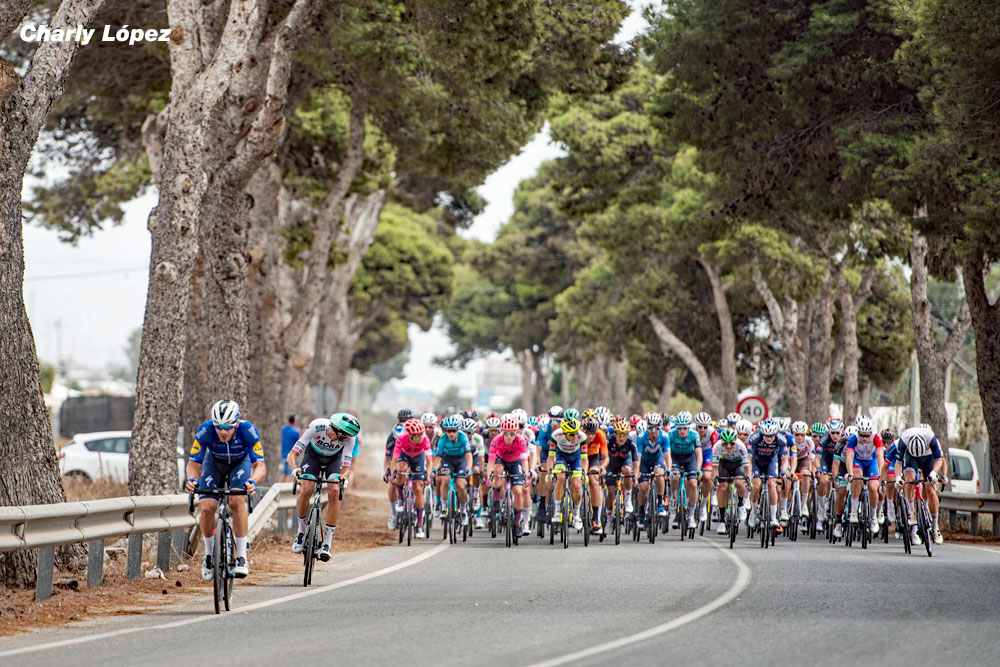 Sénéchal and Meeus try to go 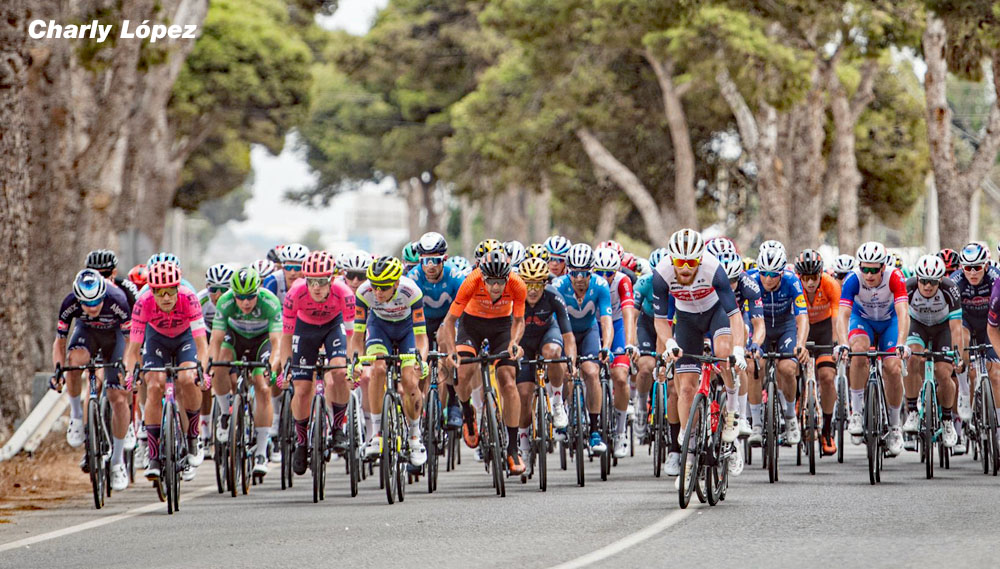 The peloton isn’t too keen to let anyone go, just yet 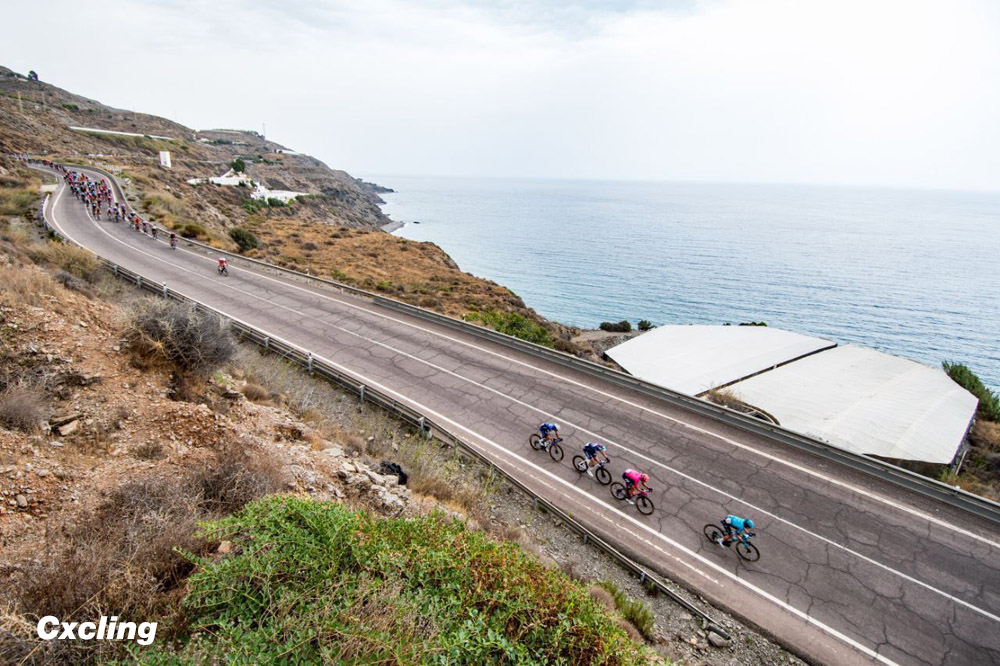 The peloton took a second day off in the run-up to the difficult final kilometres. The lead of the break rose to over 13 minutes, but that was the maximum for Jumbo-Visma. The biggest challenger to virtual leader Eiking was Guillaume Martin, who was 29 seconds behind the Norwegian overall. On the tough Puerto de Almáchar (10.9km at 5.4%) the decision was made on who would take the red jersey from Roglič. The last 5 kilometres were the steepest, with average percentages of up to 8%. 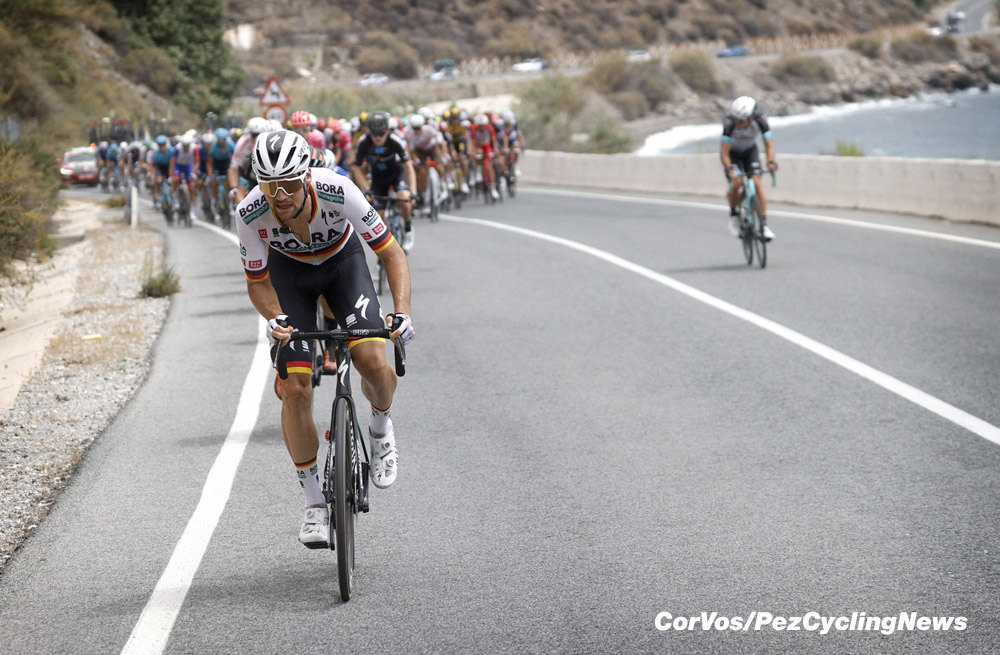 German champ, Schachmann, made it into the big break of the day

On the climb, Trentin, Herrada, De Tier and Aranburu broke away from the leading group and had a lead of 15 second at the start of the Puerto de Almáchar. The first attack from behind came from Storer, Bagioli and Craddock, but that was not the decisive move as everything came back together. Oliveira was the next to try with Cort taking control. 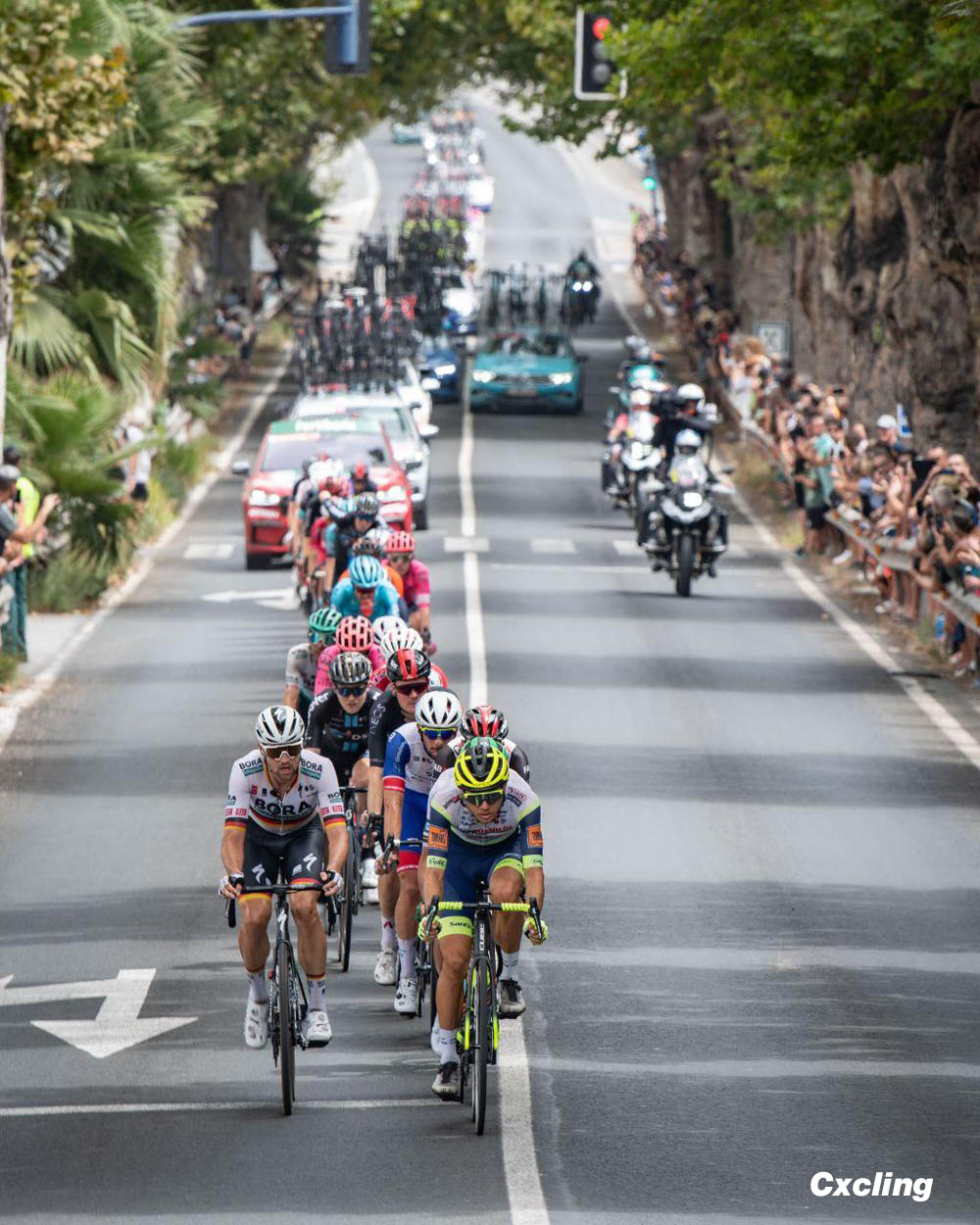 In the steep final section of the climb, it was the climbers who took over. Storer, who won the stage to Balcón de Alicante, jumped 3 kilometres from the top and quickly had 30 seconds. He continued to expand that lead over the pursuers. In that chasing group, there was a battle within the battle, as Martin tried to drop Eiking, but the Norwegian stuck to the Frenchman’s rear wheel. 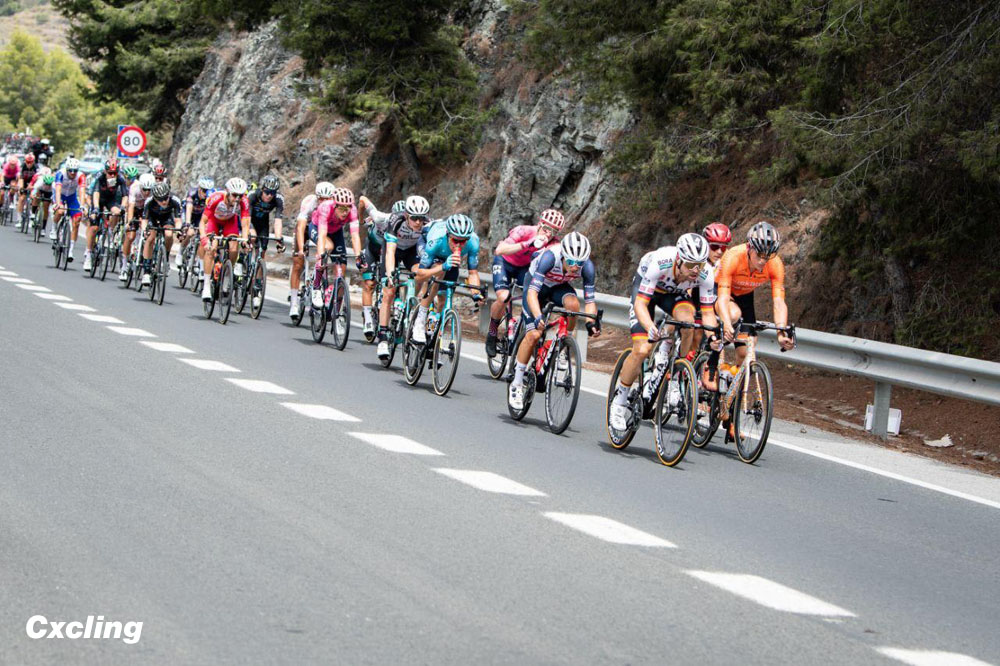 Storer crossed the top of the Puerto de Almáchar with a good half minute lead. The chasing group consisted of Bouchard, Champoussin, Martin, Vansevenant, Van Baarle, Eiking, Schultz and Elissonde. The last 15 kilometres were mostly down hill to the finish in Rincón de la Victoria. On the descent Storer defended his lead, allowing him to celebrate his second stage win of this Vuelta. 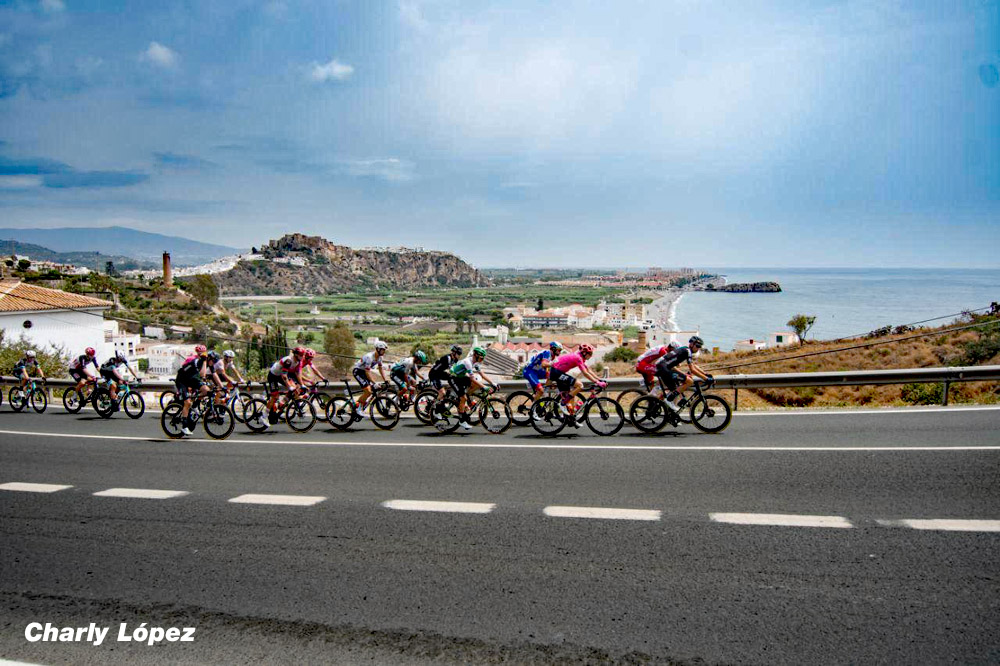 The break took a lead of over 12 minutes 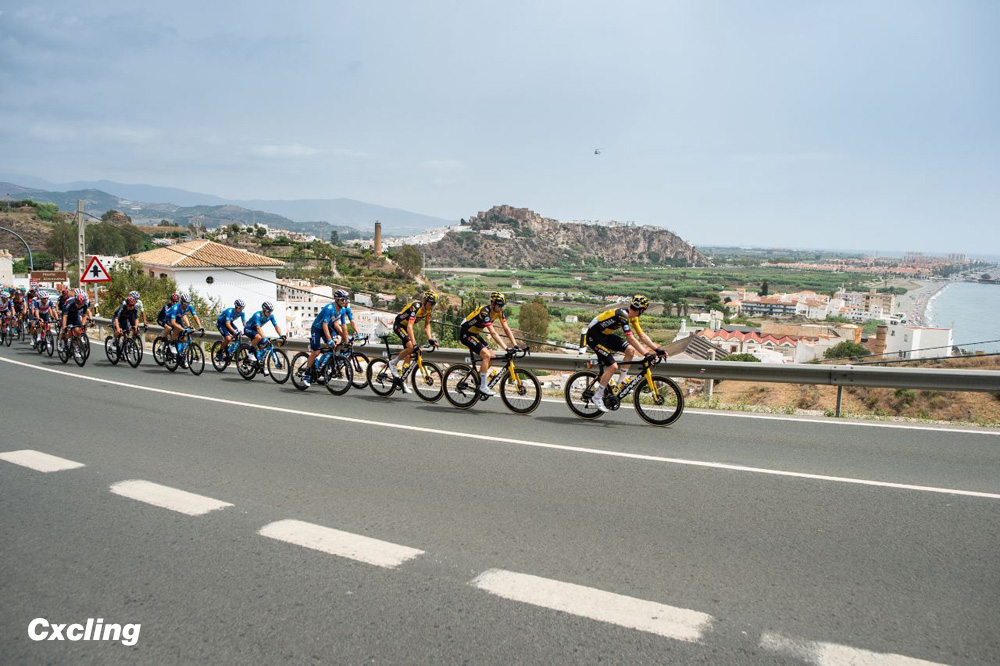 Jumbo-Visma were leading the disinterested peloton

Eiking, Vansevenant and Champoussin managed to break away from the group with Guillaume Martin on the descent. They came within 20 seconds of Storer, but that was too late to go for the stage victory. Among the favourites it was Movistar that picked up the pace on the climb. Mikel Landa had another bad day and was dropped before the difficult part of the Puerto de Almáchar. The first attack there came from Roglič, who decided to brake up the GC group and force Movistar to chase. 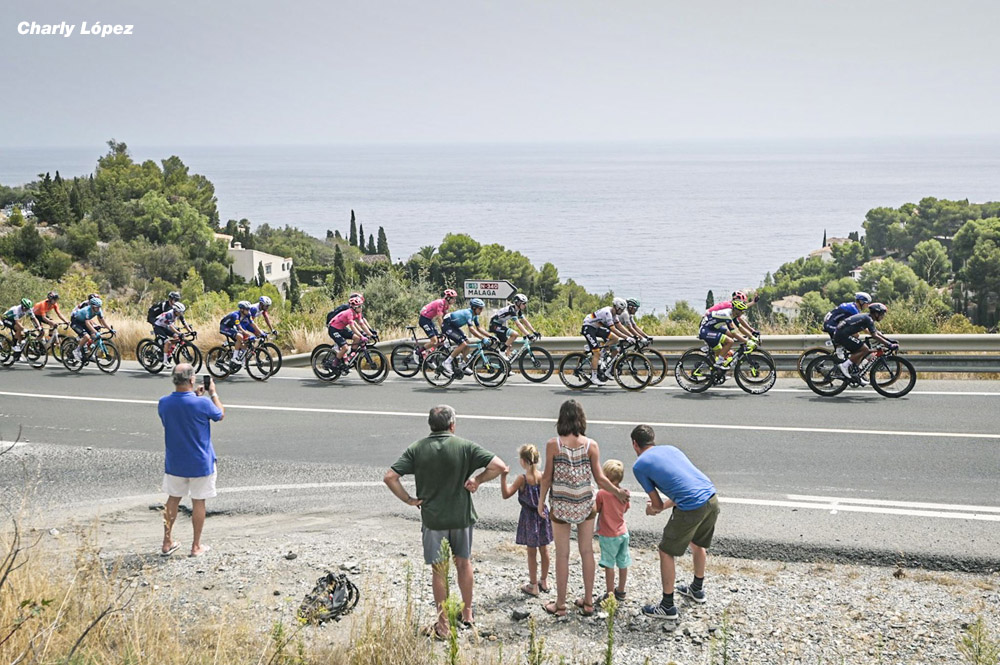 The fans were out as usual

Miguel Ángel López, Enric Mas, Jack Haig and Sepp Kuss managed to distance Egan Bernal and Adam Yates, and others, but they couldn’t get any closer to Roglič. The Slovenian wanted to see who was the best of the overall riders. With an 18 second lead on the three pursuers, he crested the climb. On the fast descent things went wrong for Roglič, who took a big risk on one of the bends and slid to the tarmac. He was quickly back on his bike and was able to rejoin the Mas group. 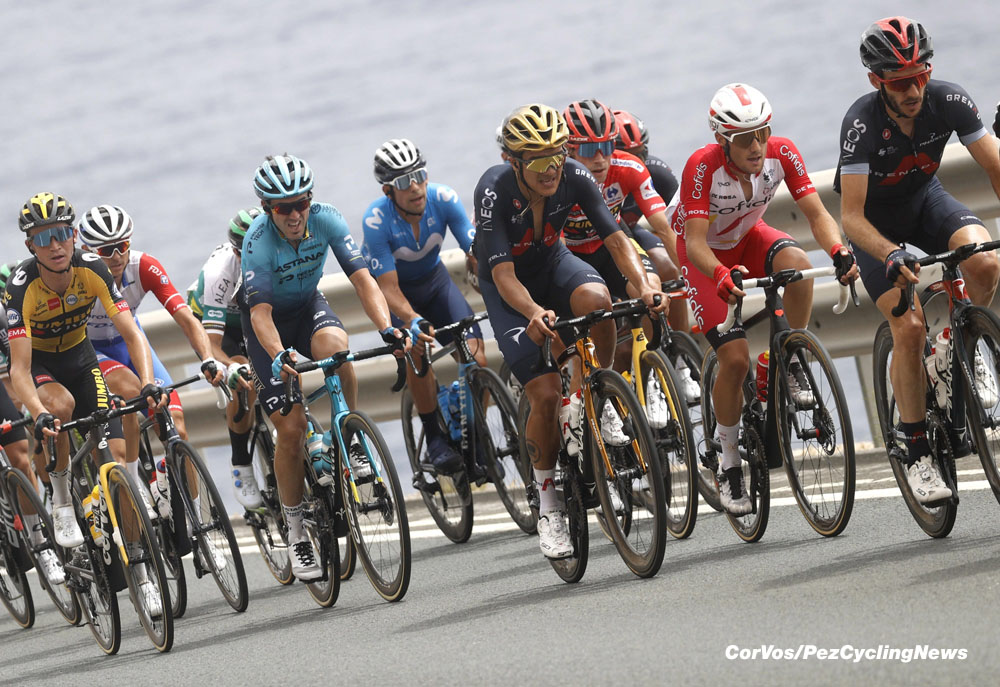 Roglič was keeping his powder dry 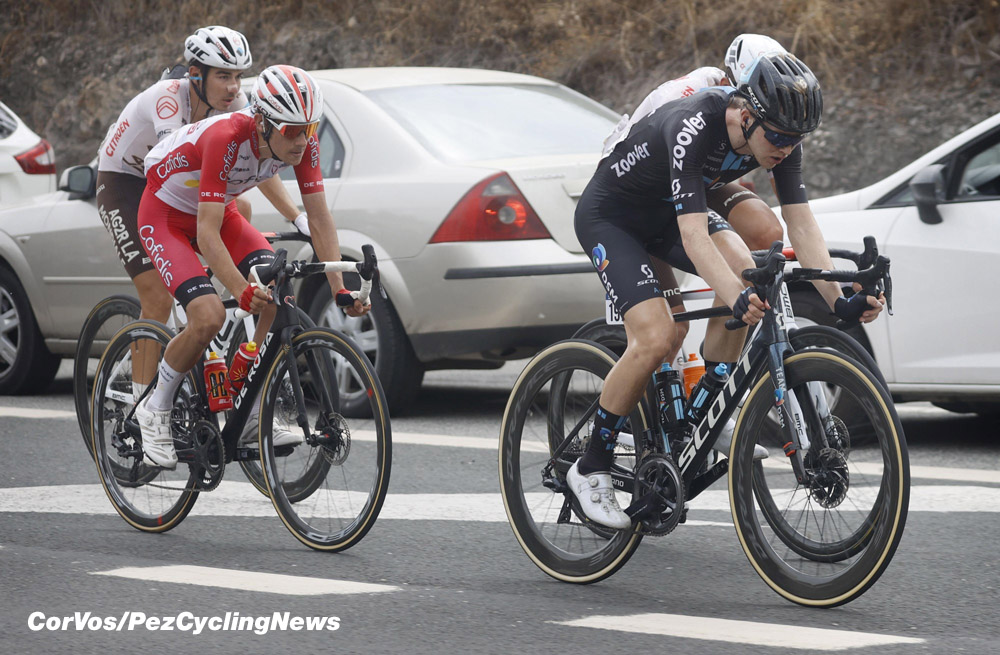 Storer about to leave them all behind

In the last part of the descent, Kuss, Vlasov and Großschartner were able to join the foursome of Roglič, Mas, López and Haig. Bernal, Yates, Meintjes, De la Cruz and Majka tried to catch them, but the difference at the finish was more than 30 seconds. Odd Christian Eiking is now the new overall leader. He is the second Norwegian to lead la Vuelta, after Thor Hushovd in 2006. Eiking’s teammate Rein Taaramäe wore the red for several days last week. Guillaume Martin is at 58 seconds, in second place and Primož Roglič is third at 2:17. 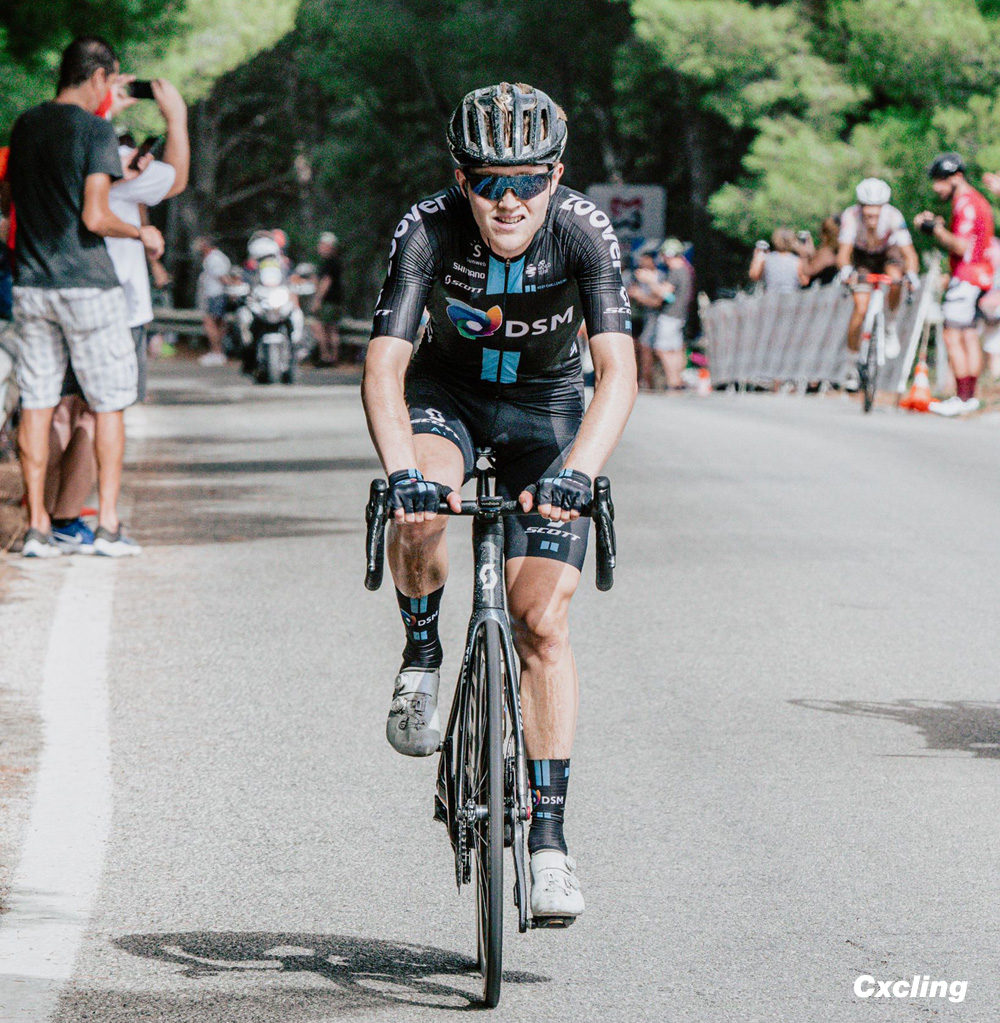 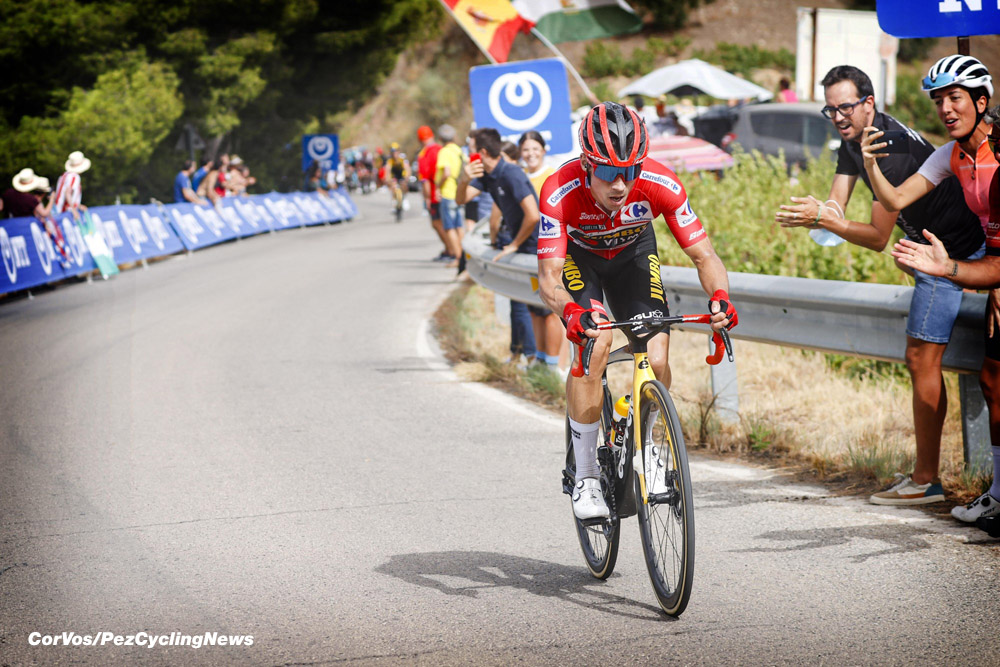 Roglič attacked the other GC men

Stage winner, Michael Storer (DSM) “It’s truly even more unbelievable than the last time. It was a massive fight for the breakaway. It’s one of these epic days where it takes… I think we did 80km before the break went. I was happy to get in there. I was feeling good on the last climb. I knew exactly what I needed to do to win today. I had to attack. I felt how I thought my competitors felt. I felt the moment to attack. I went and hoped for the best. I didn’t have exact time gaps but I knew it was tight. I had to go fast down that descent. There are dry and slippery roads in this region. I felt my descent was just enough to hold on. I don’t realise yet that I have won two hard stages at this Vuelta after ten days. It’s actually unbelievable.” 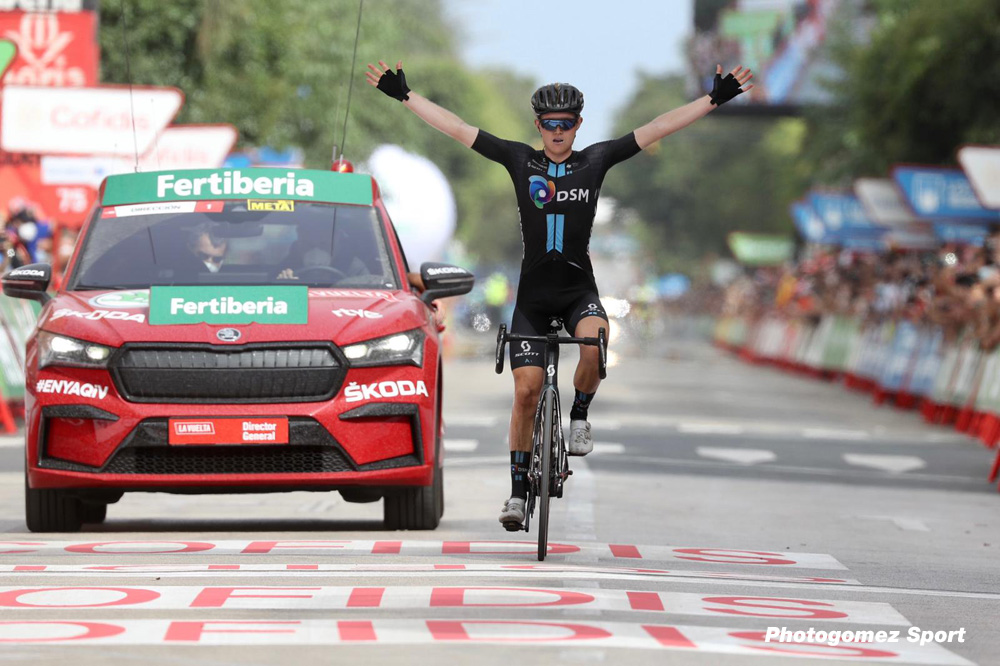 A second stage win for Storer 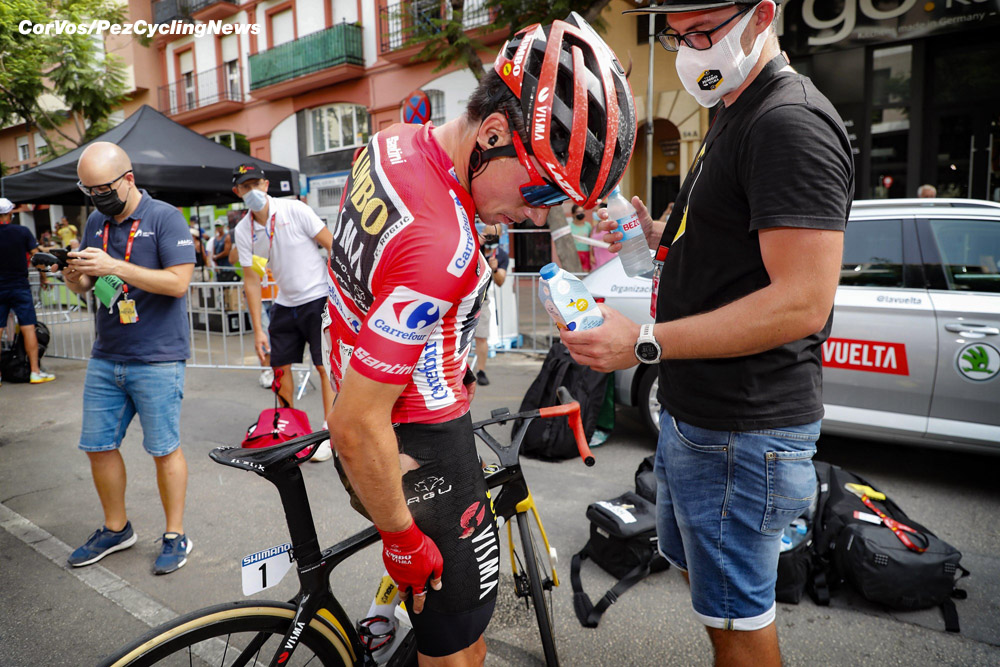 “Why did you attack?” Roglič: “Why not?” Because you might fall off

Overall leader, Odd Christian Eiking (Intermarché-Wanty-Gobert Matériaux): “We already had [La Roja] with [Rein Taaramäe] after stage 3 so this is a bonus, and a special one for me. I couldn’t expect that this morning. I was 9 minutes behind and it would almost take a miracle to be in the jersey. I heard on my earpiece 8 minutes, 9 minutes, 10 minutes… And then in the end I understood this was really possible. Guillaume [Martin] is a strong climber. He just came off a top 10 in the Tour de France. I knew it would be close, so I had an eye on him. I tried to get as many minutes as possible in the end. I can’t describe what this means, it’s really, really big.” 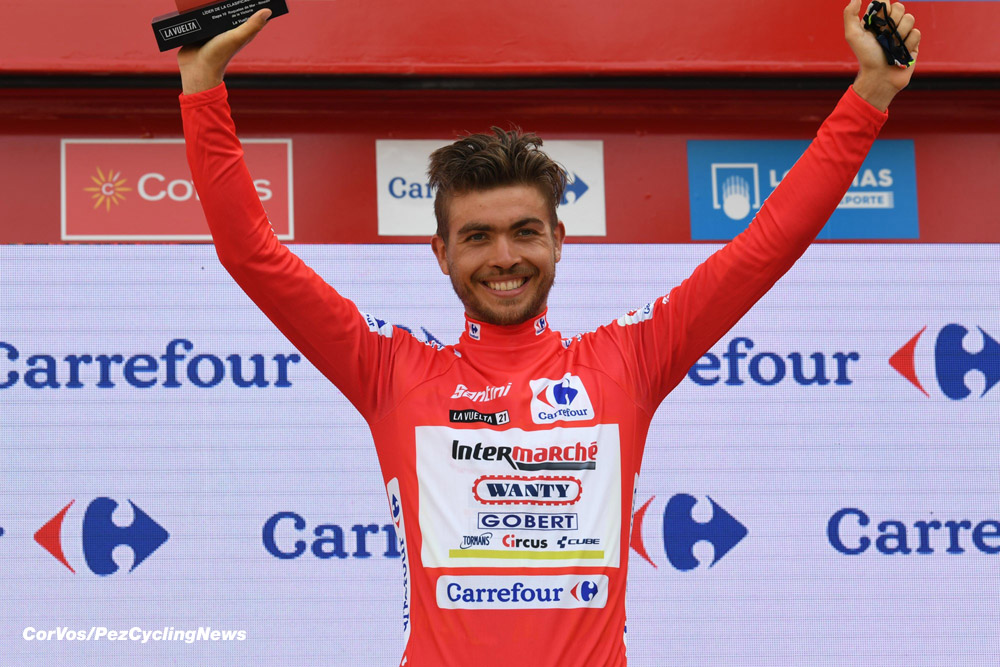 PEZ Bookshelf: From A to B – A Cartoon Guide to Getting Around by Bike