The final kilometre of stage 11

Primož Roglič has won Stage 11 of the Vuelta a España. On the stiff ramp to Valdepeñas de Jaén, the Jumbo-Visma leader fought out a tough battle with Enric Mas to the line. 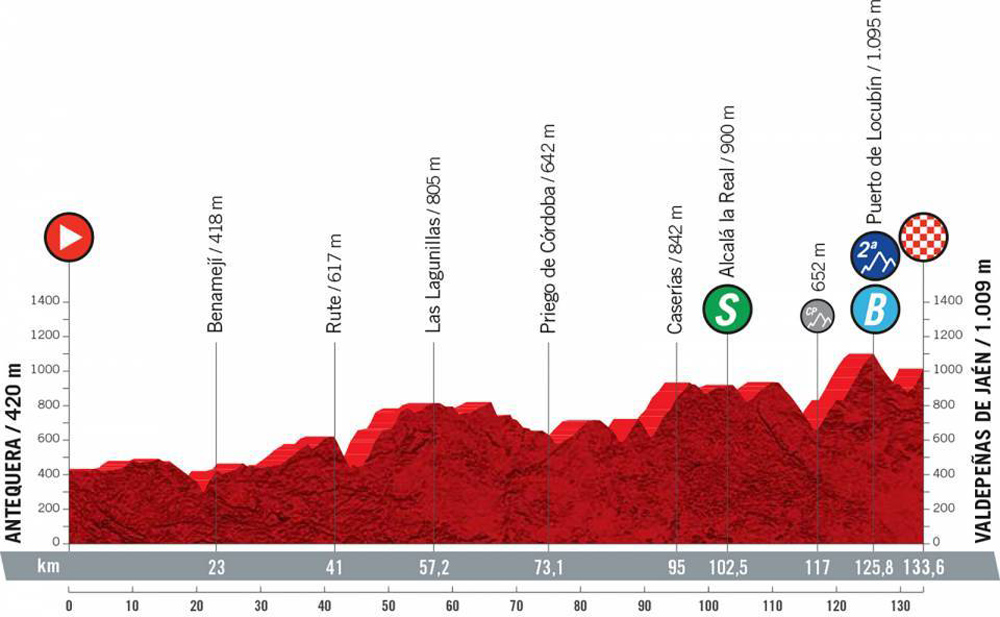 Technical director, Fernando Escartín: “Popular steep climb in La Vuelta. A winding route that crosses the provinces of Málaga, Córdoba and Jaén, with a leg-breaking terrain where heat may play a determining factor. The arrival will be very tough, with slopes of over 20% in the final kilometre.” 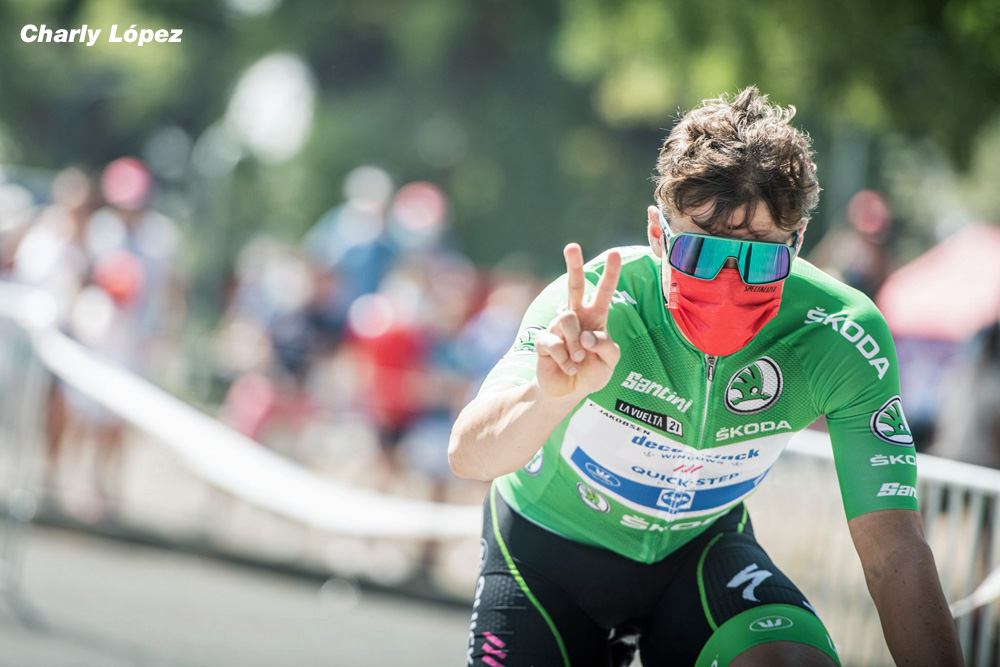 Too tough a stage for Jakobsen in the green jersey? 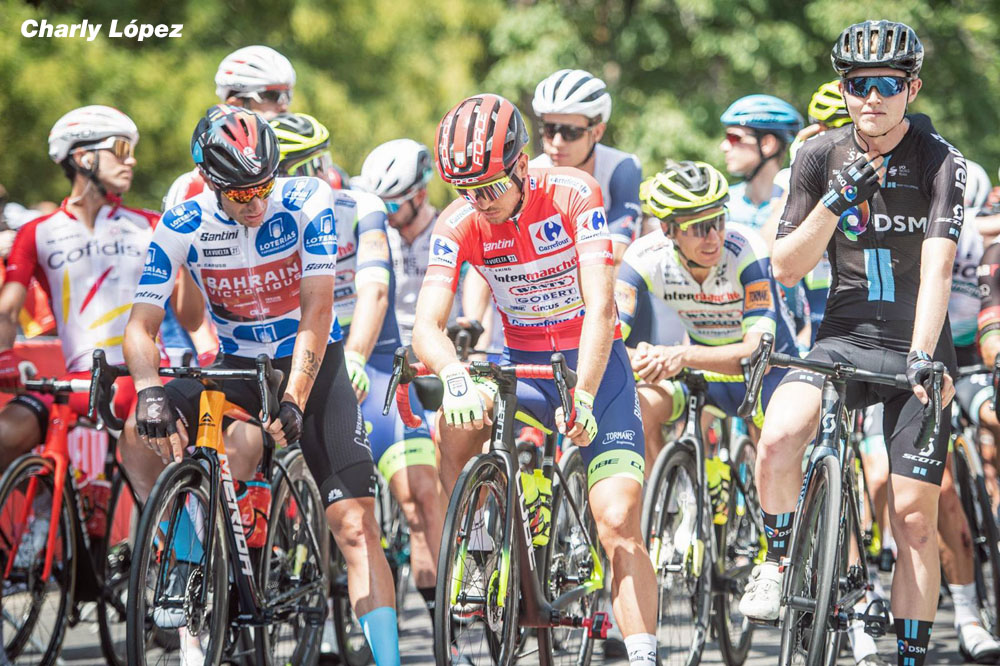 Vuelta stage 11 started in Antequera and finished in Valdepeñas de Jaén. With more than 2,500 metres of climbing it was a hard day, with the ascent of the second category Puerto de Locubín in the finalé. From the top there was still 7.8 kilometres to ride to the finish. The finish was on a climb of 1,400 metres at an average of 7.5%. The final kilometre ramped up at 9.7%. 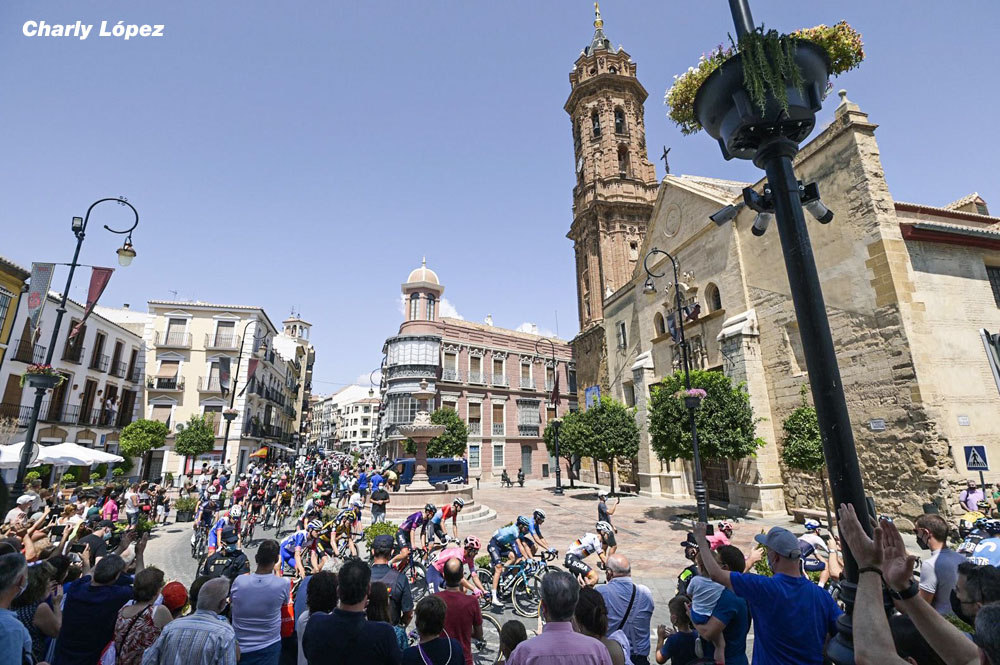 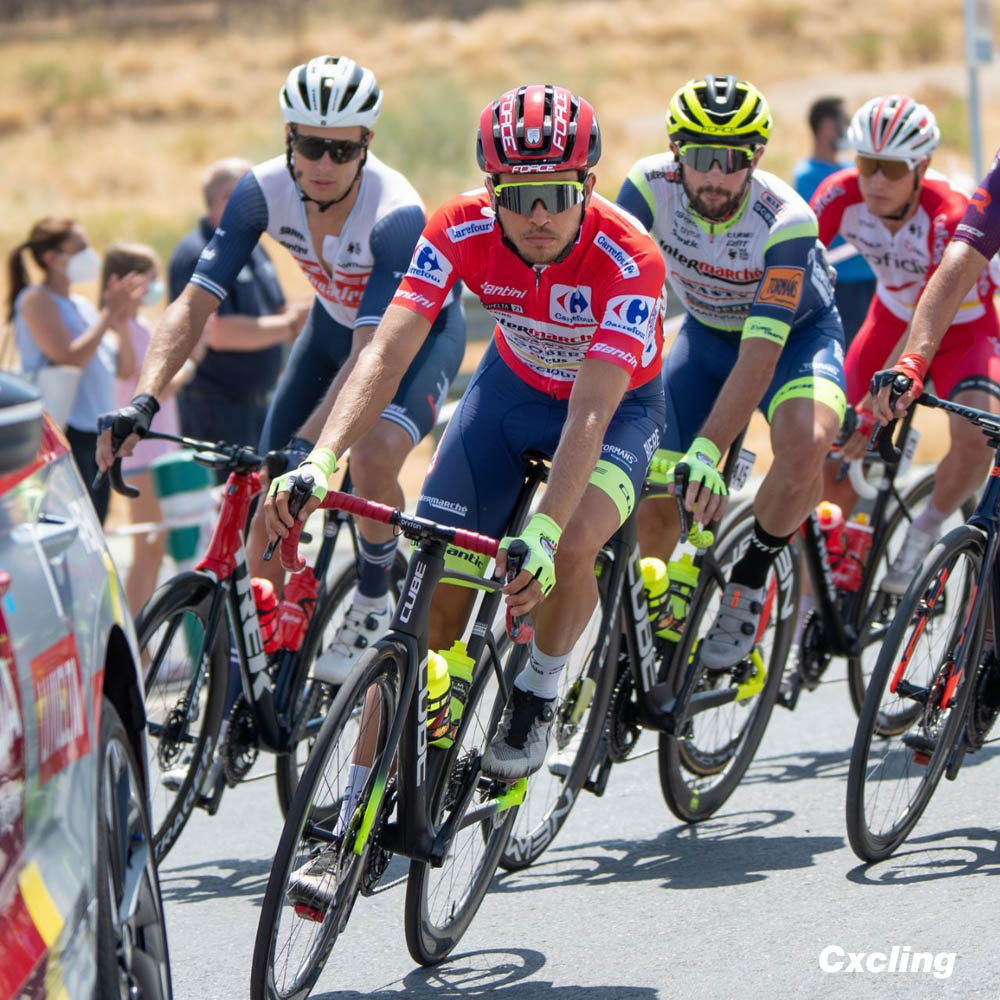 Two riders were not at the start: Two-time stage winner Jasper Philipsen was struggling with a fever and Alex Aranburu was suffering too much from a crash. The start was fast as many teams wanted a rider in the break of the day. After 28 kilometres the break succeeded. Edward Planckaert (Alpecin-Fenix), Harm Vanhoucke (Lotto Soudal), Jonathan Lastra (Caja Rural), winner of stage 6, Magnus Cort (EF Education-Nippo) and Joan Bou (Euskaltel). 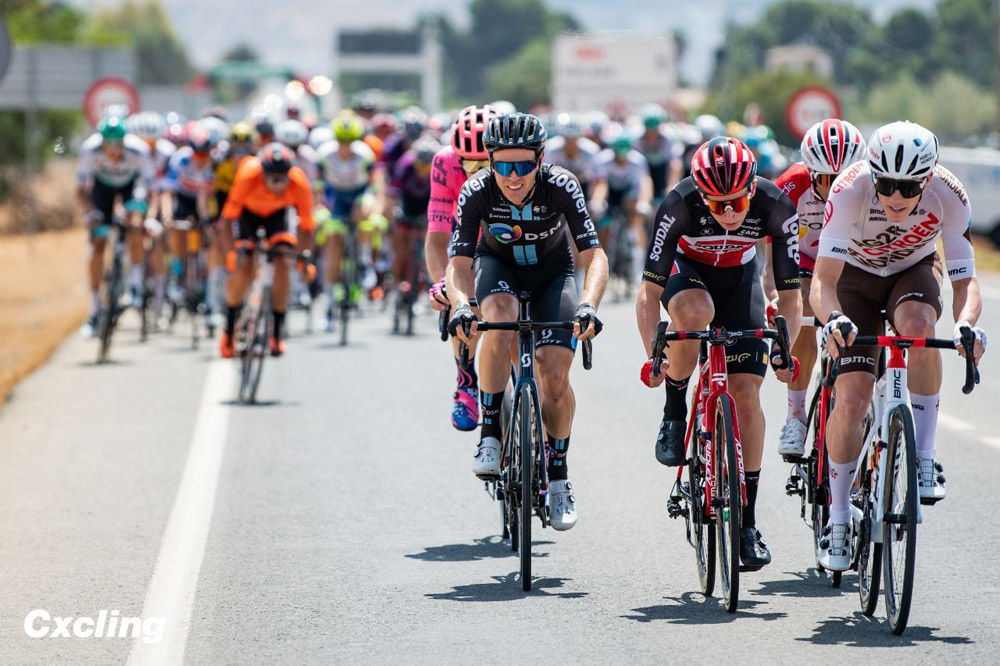 The attacks came soon after the star 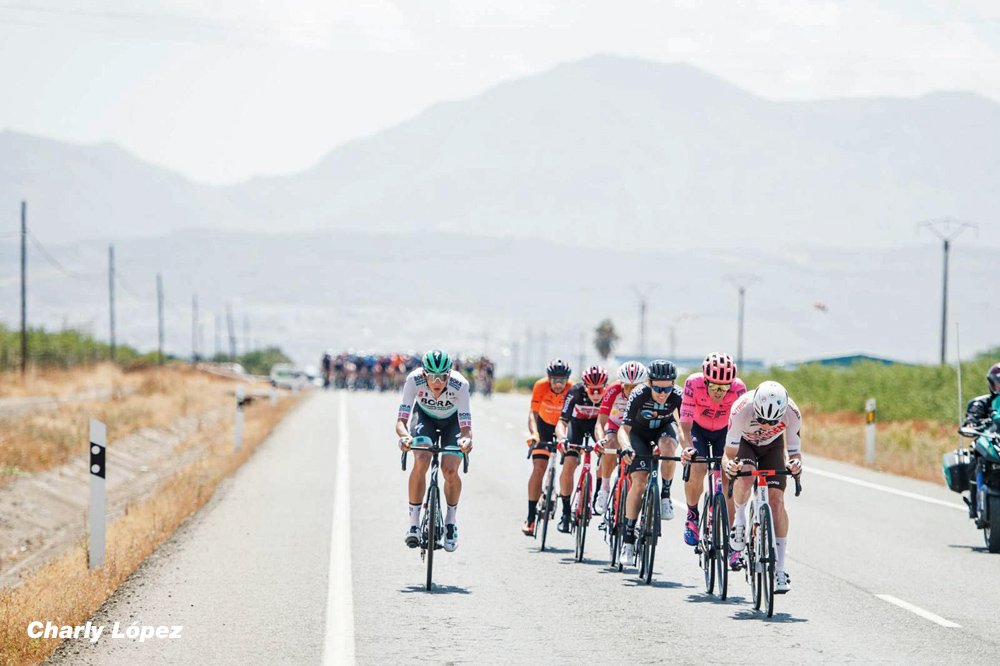 Another hot day in the saddle

The five escapees soon had 2 minutes, Jumbo-Visma, Intermarché-Wanty-Gobert and BikeExchange controlled the race behind. With 87 kilometres to go, Quinn Simmons, Mikel Landa and Felix Großsschartner crashed on a right-hand bend, but all three were quickly back on their bikes. The lead fluctuated for a long time between 1 and 2 minutes. The intermediate sprint went to Planckaert from Cort, Lastra, Vanhoucke and Bou, 31 kilometres from the line. 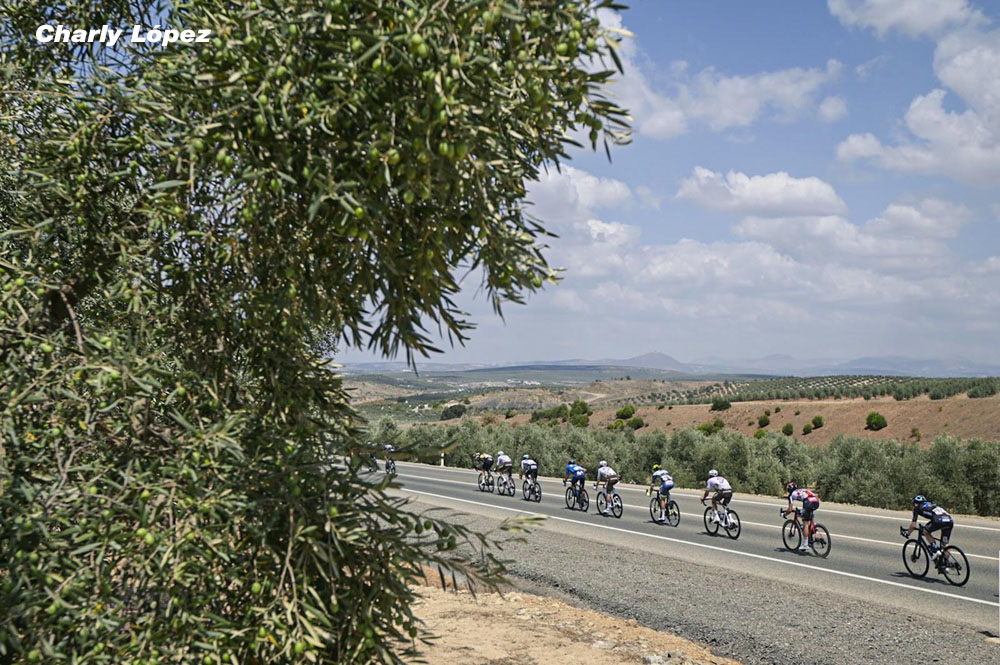 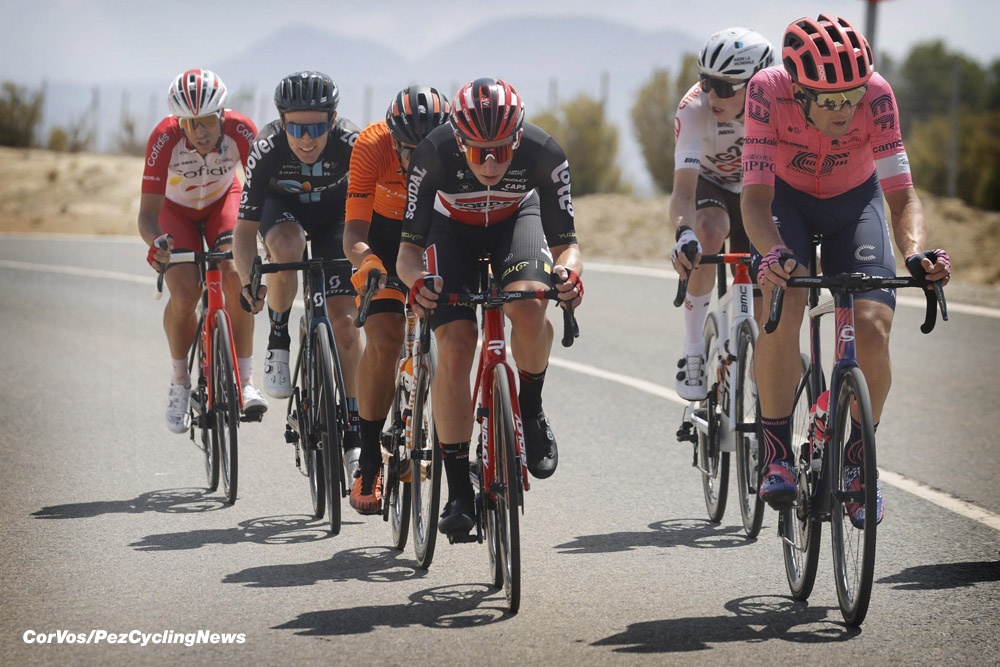 After the sprint, the time difference fell sharply, partly due to Bahrain Victorious, Movistar and Astana-Premier Tech. Vanhoucke was dropped by the break on the descent to the Puerto de Locubín, but was able to return at the start of the climb. Cort had just attacked from the front. On the climb, Jumbo-Visma put Koen Bouwman to work. The Dutchman caught the first early escapees; Bou, Lastra and Planckaert, and eventually Vanhoucke. Cort was at full speed and managed to hold the peloton off. 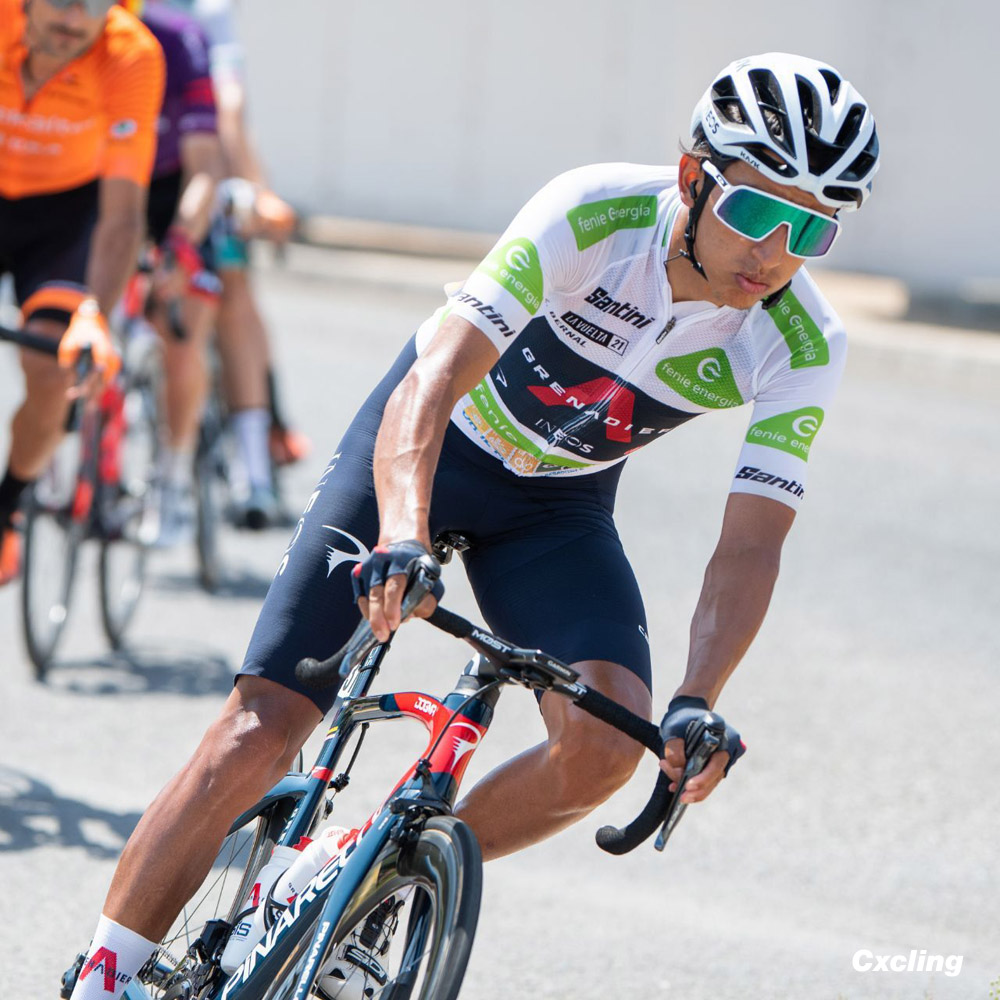 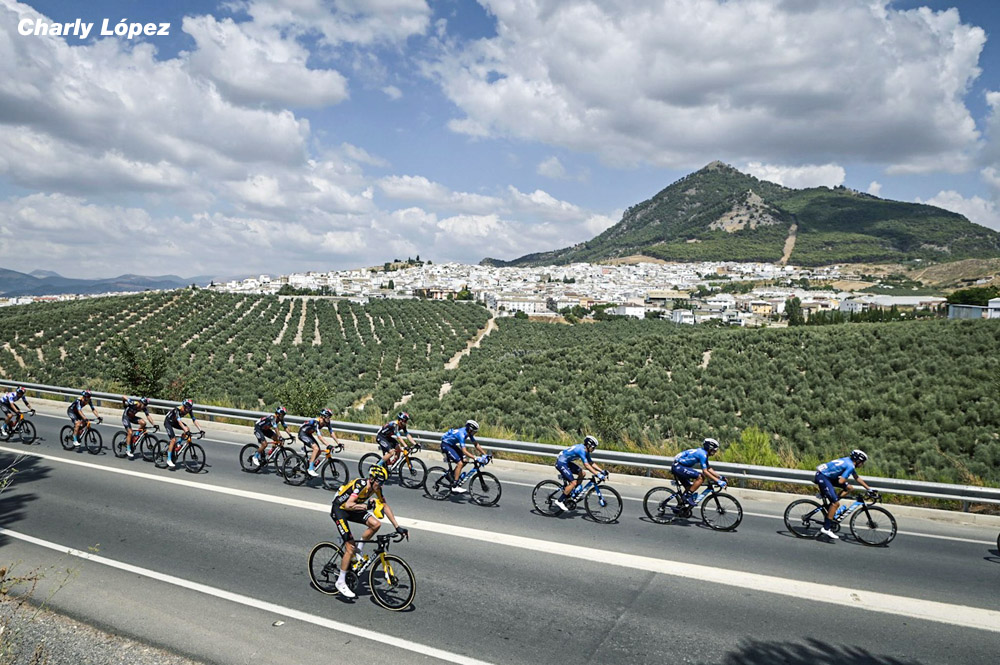 Cort held on to a 40 second lead, until Mikel Nieve started to close the gap. Two kilometres from the top, David De la Cruz counter-attacked from a thinned peloton, and Steven Kruijswijk tried to cross to him. Cort was the first over the top of the Puerto de Locubín. Behind, De la Cruz was caught by Damiano Caruso, wearer of the KOM jersey. 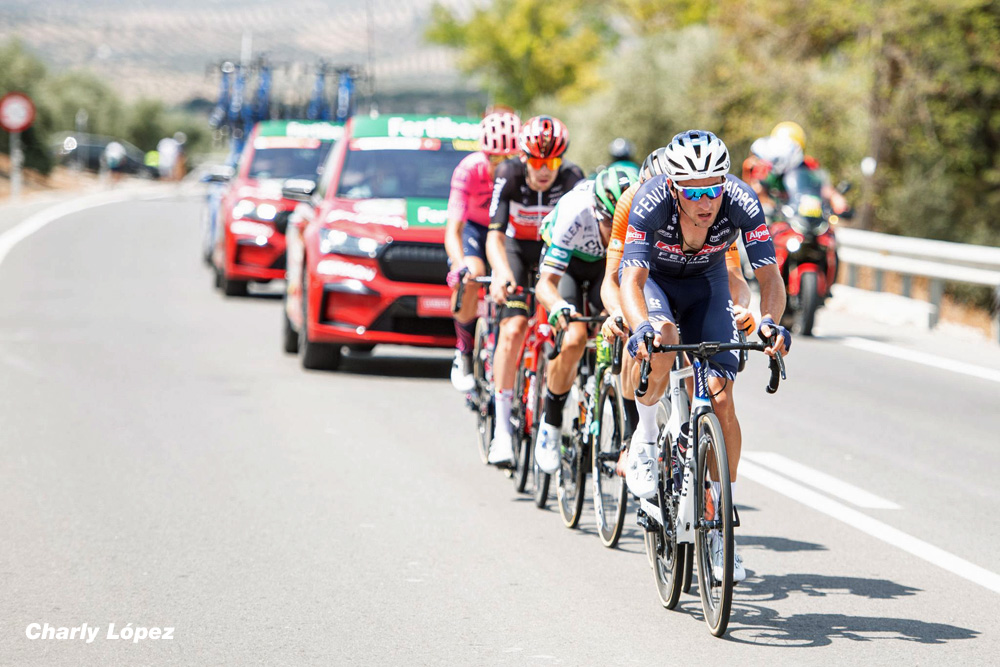 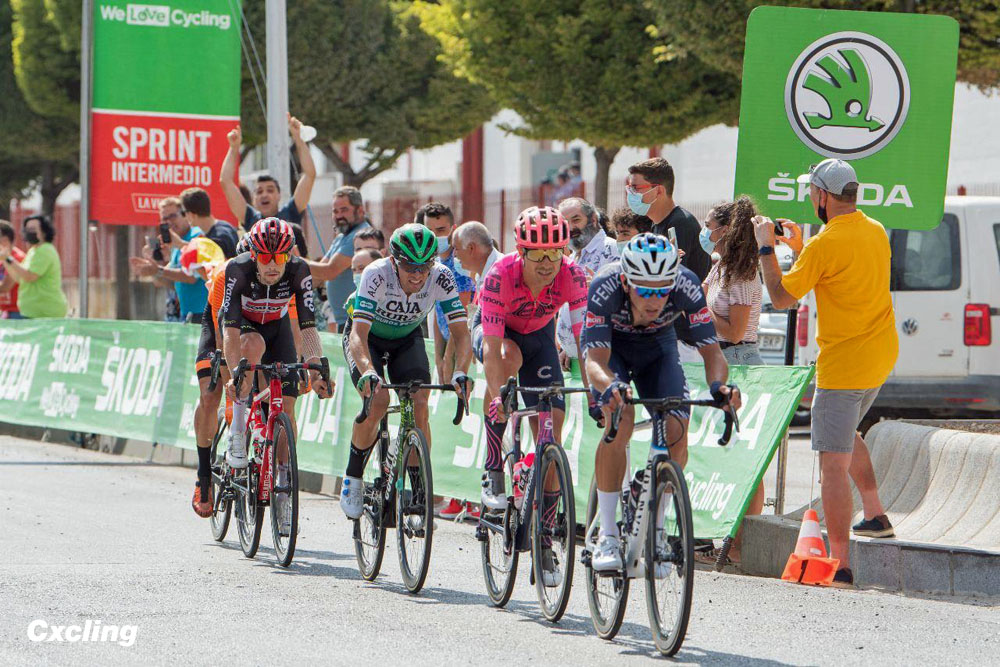 The break going through the sprint in Alcalá la Real

With 30 seconds on his pursuers, Cort started the descent towards the final climb to the finish in Valdepeñas de Jaén. Behind him, Primož Roglič and Enric Mas started to fight. Roglič was launched by Sepp Kuss and the Slovenian rode side-by-side with Mas. On the steep slopes of the climb they were quickly catching the remaining leader. For a moment Roglič and Mas looked at each other, giving the impression that Cort could stay ahead for the win. 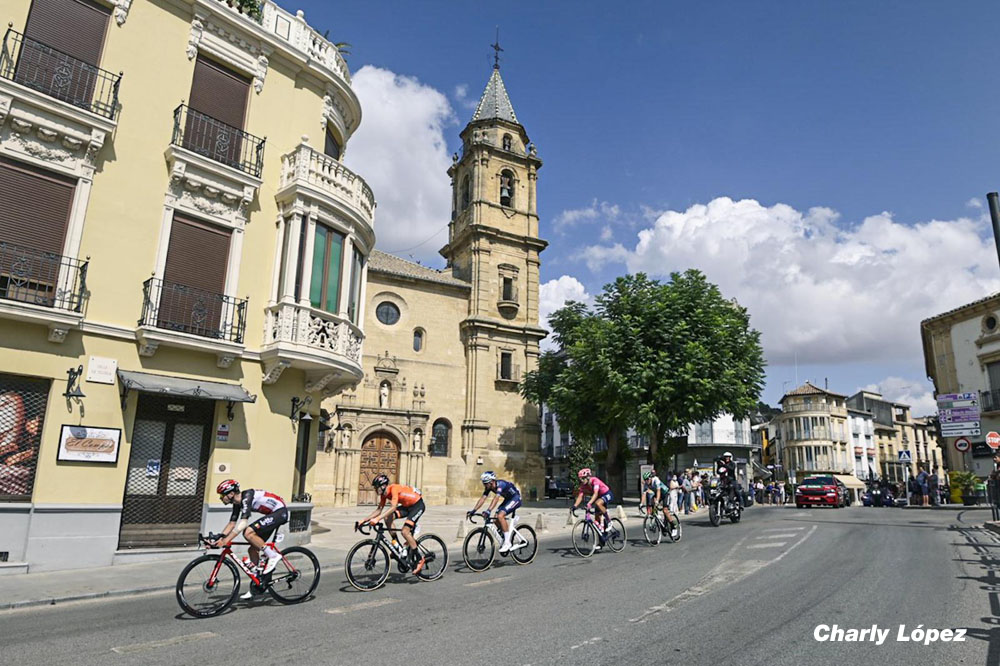 How long will the break hold out? 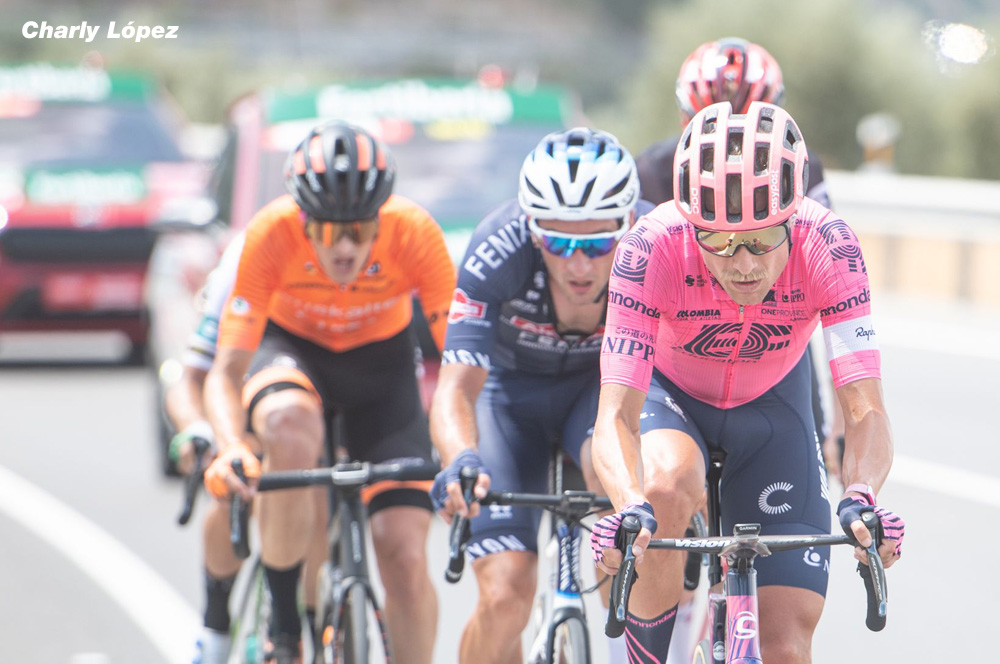 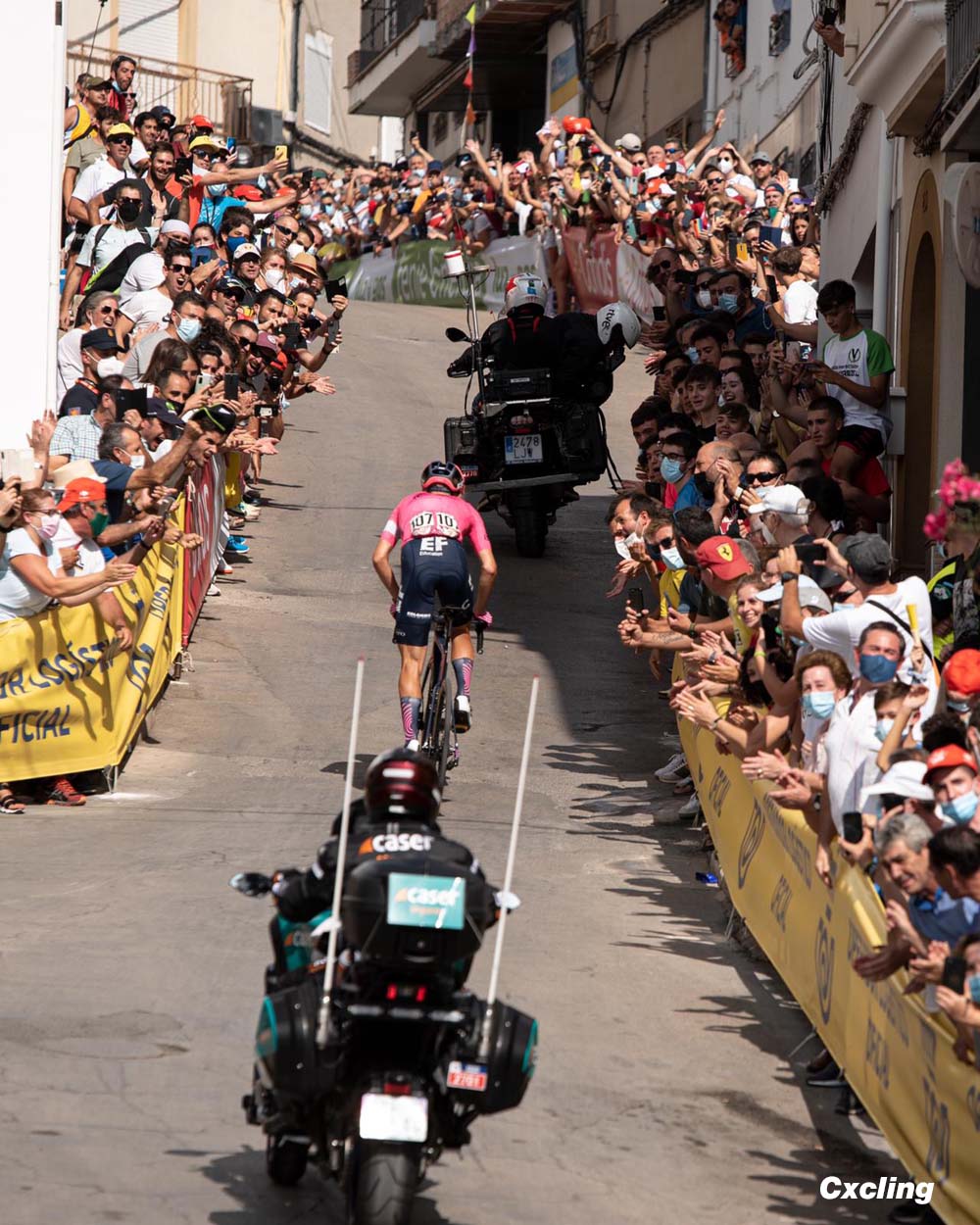 It was so close for Cort Nielsen

A second jump from Roglič and Mas cost Cort his just before the finish. Roglič was the stronger of the two and took the stage victory. Mas had to settle for second place, Miguel Ángel López was third. Cort was broken and eventually finished 25th. Odd Christian Eiking remained in the lead of the overall, but Roglič and Mas got a little closer. 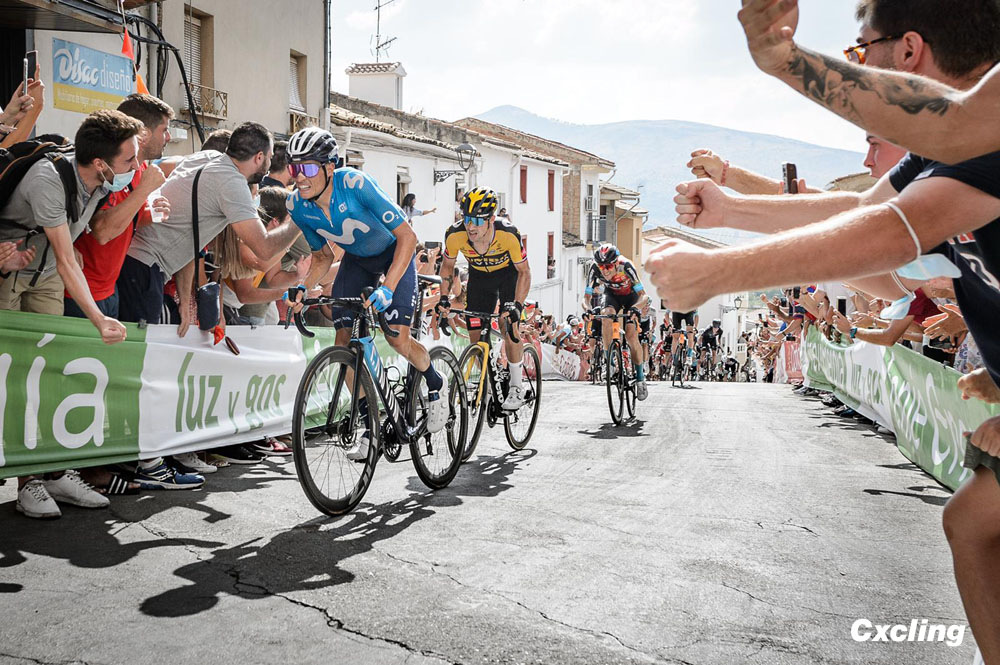 The battle was on 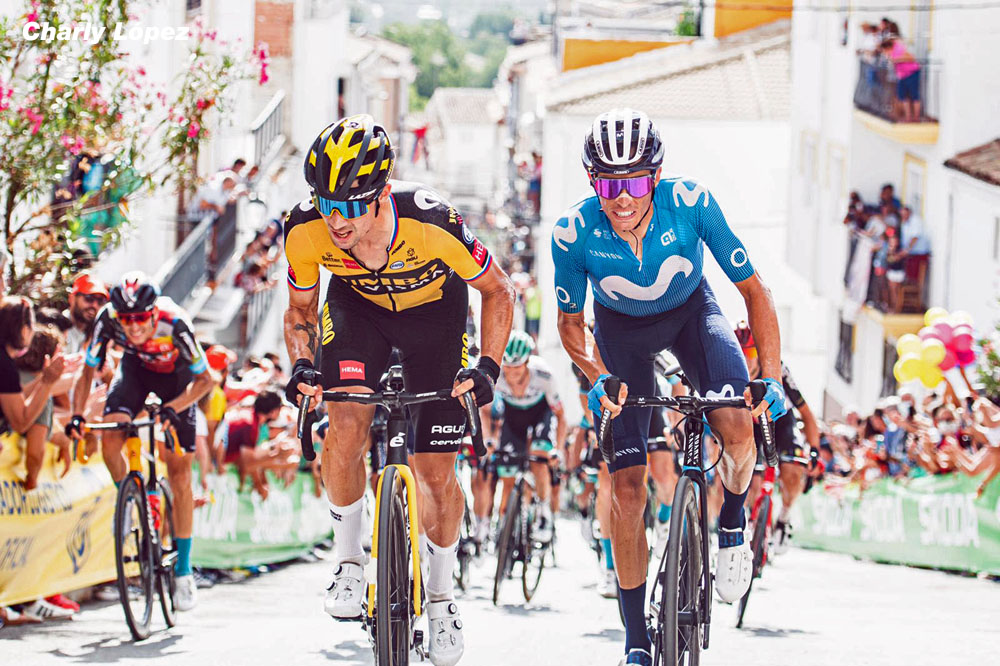 Roglič took on Mas for the win 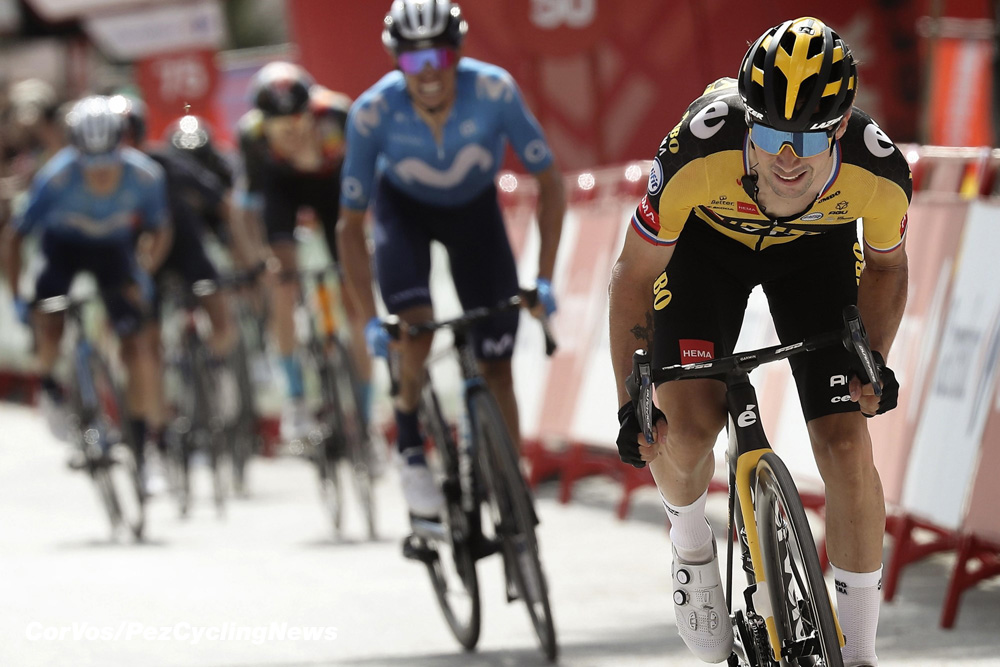 Roglič had the jump 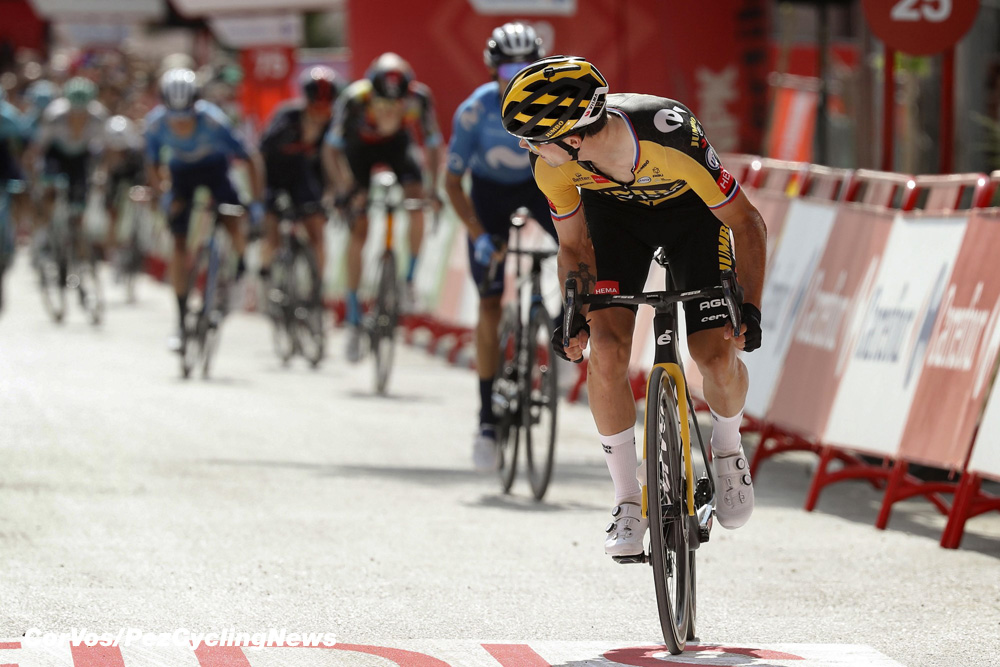 Stage winner and 3rd overall, Primoz Roglič (Jumbo-Visma): “It was close again! The other day, Magnus Cort Nielsen was first and I was second, and this time it’s the other way around. It was a hard stage, short but super hot again. I was also suffering a lot, but luckily I had enough for the win in the end. Enric Mas is also very strong, luckily I had a little more. It’s always nice to win, you never know when the last one will be. It was a nice finish with a steep uphill. It was a nice challenge. The team did an amazing job, pushing really hard the whole day to keep the breakaway under control. A big thanks to them for making it possible in the end. Yesterday was still a good day [despite crashing] and I wanted to take positive things away. And today we won, it’s beautiful.” 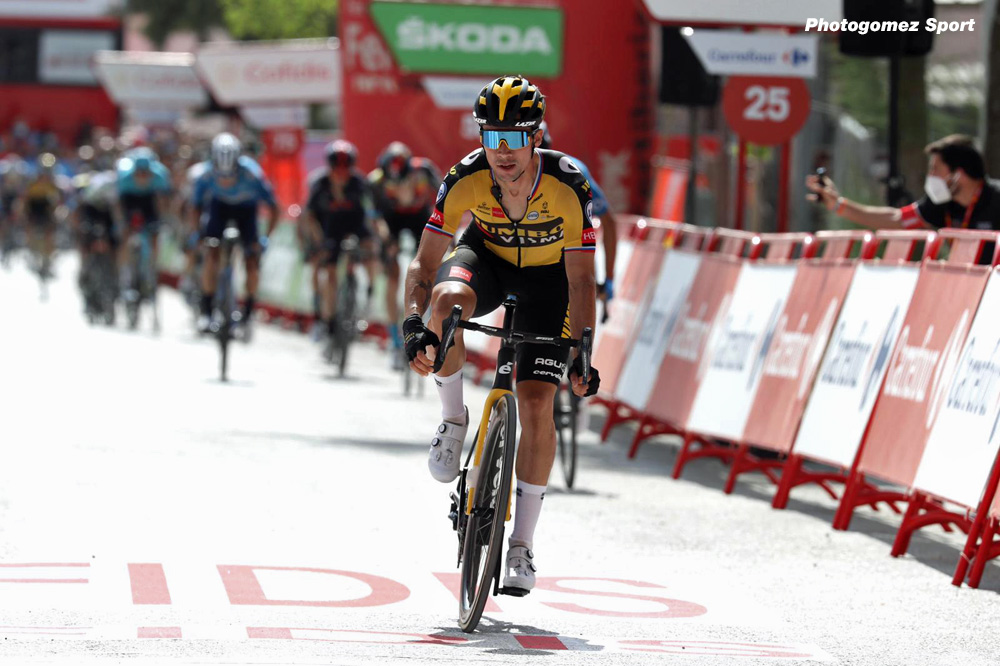 Overall leader, Odd Christian Eiking (Intermarché-Wanty-Gobert Matériaux): “My biggest opponents for the jersey were at the front with Primoz Roglic fighting for the win and Guillaume Martin also doing well. I didn’t want to lose too much time, so I just followed them and it resulted in a top 10, that’s also nice. I passed Martin in the last few metres to sneak in the top 10, I’m glad I did it. It was a really nice day. I really enjoyed being in the jersey. I just take it day by day, and today was actually a little bit harder than I expected, with tailwind all the way and a solid pace with teams wanting to keep it together to fight for the stage win. It was really hard, but I’m glad I could keep it, and I hope I can keep it tomorrow too.” 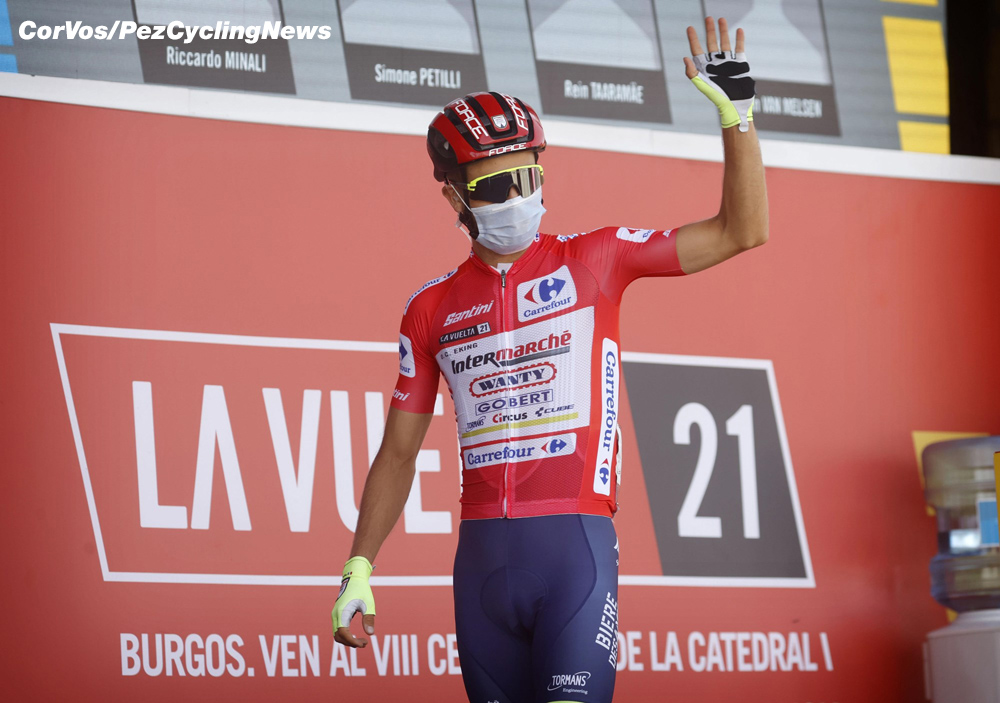 Eiking still in the lead

Sweat Bomb: How Much Do You Sweat?

EUROTRASH Thursday: Evenepoel, Van der Poel and all the Other Cycling News!