Another sprint for Deceuninck - Quick-Step

Vuelta Stage Report: As expected, stage 13 finishing in Villanueva de la Serena came down to a bunch sprint. Deceuninck – Quick-Step had a perfect lead-out train, but they lost the green jersey of Fabio Jakobsen in the last kilometre. That didn’t matter as Florian Sénéchal did the business for the Wolf Pack. There was no change on the overall.

Florian Sénéchal was the winner of the thirteenth stage of the Vuelta a España. After a stage of 203.7 kilometres, the Frenchman of Deceuninck – Quick-Step managed to win a split bunch sprint. He was ahead of Matteo Trentin (UAE team Emirates) and Alberto Dainese (DSM). The red leader’s jersey remains on the shoulders of Odd Christian Eiking on the eve of a weekend of climbing.

Technical director, Fernando Escartín: “Sprinters will fight it out in one of the final flat stages of La Vuelta 21. A very demanding day for teams with sprinters who will have to brave the heat that is characteristic of this part of Extremadura as well as the almost 200 km that make up the route.” 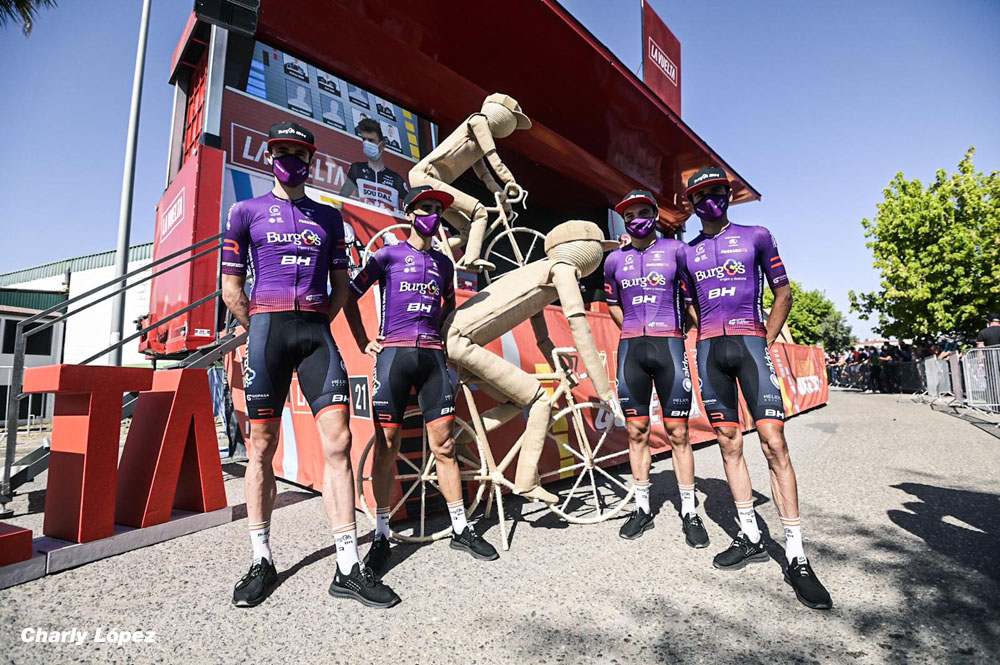 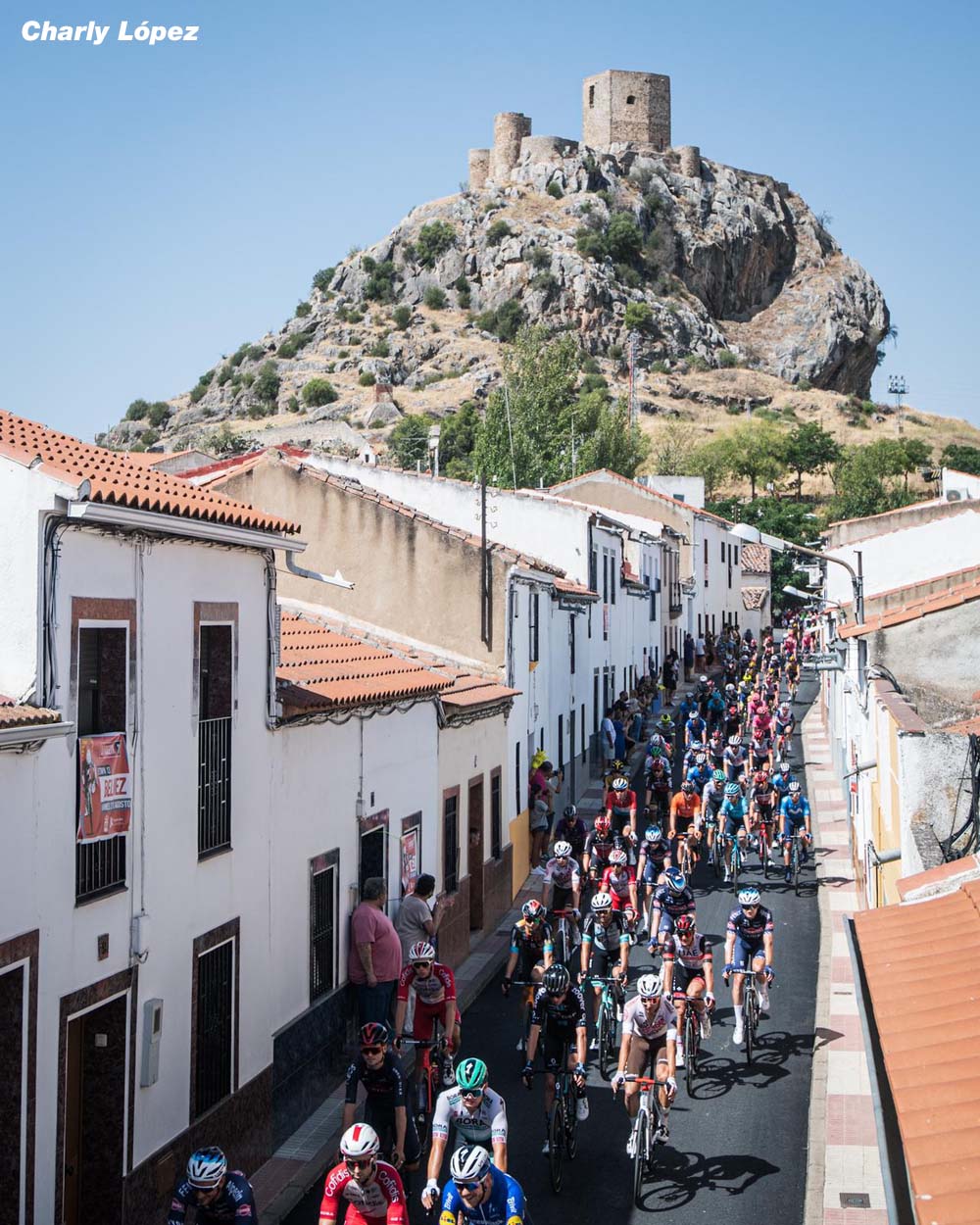 The peloton leaves Belmez and its castle

Diego Rubio (Burgos-BH), Alvaro Cuadros (Caja Rural-Seguros RGA) and Luis Angel Maté (Euskaltel-Euskadi) of the three Spanish wildcard teams made up the break of the day, but their lead was kept within around 2 minutes. Deceuninck – Quick-Step, Groupama-FDJ and DSM were in control of the peloton. 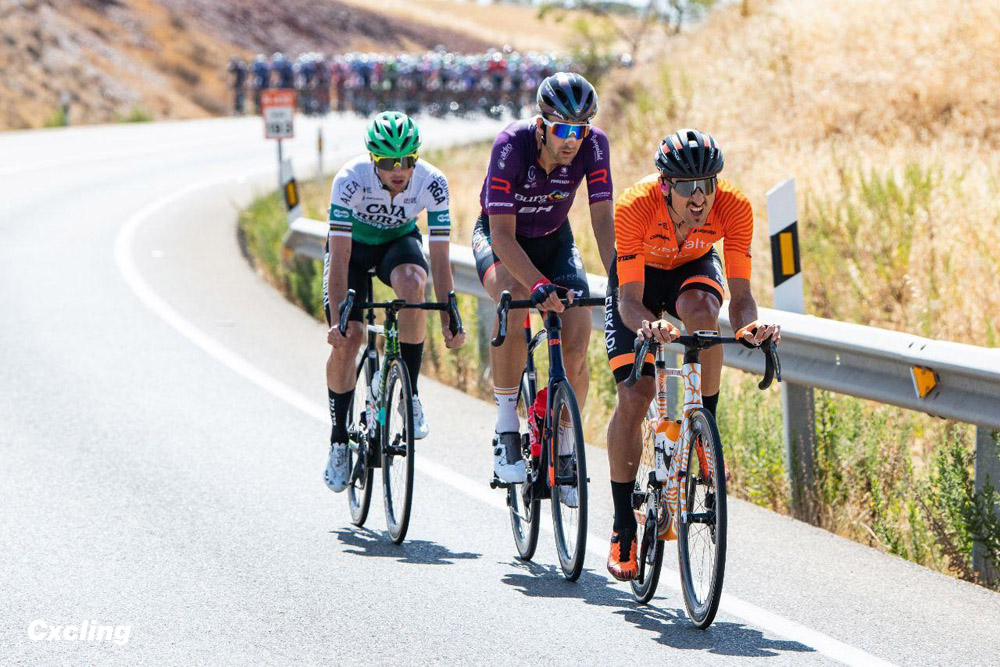 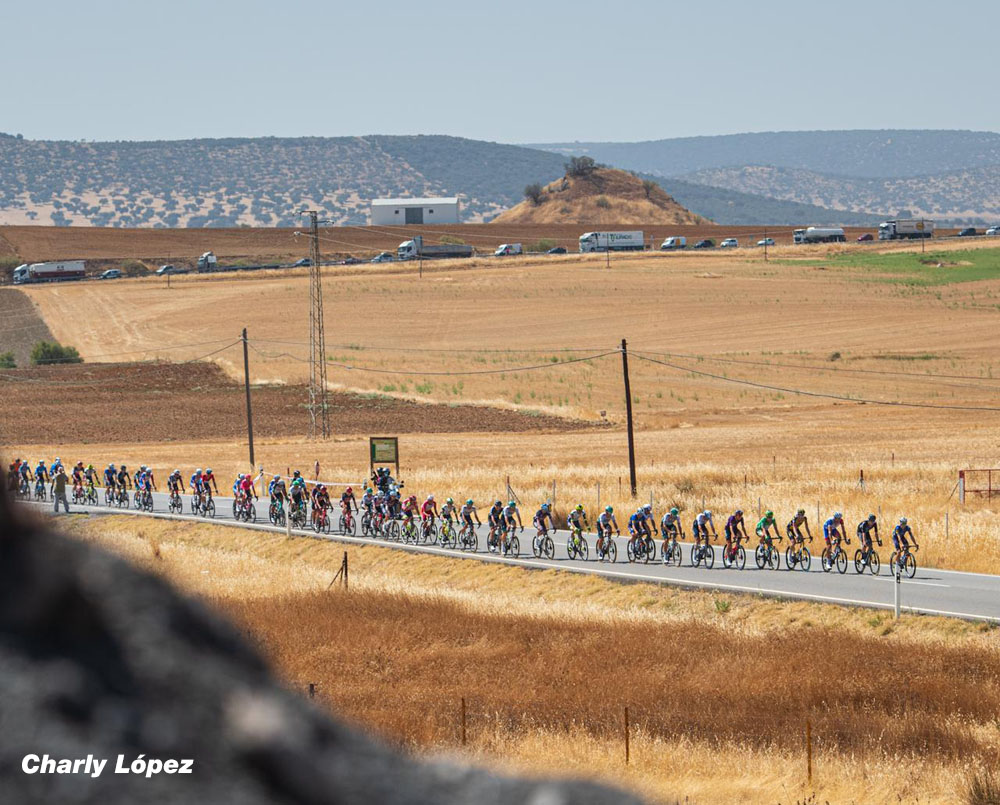 The peloton enters the region of Extremadura

The lead of the three fluctuated between 1:30 and 2:30, but not much else happened. Fabio Jakobsen took his first stage victory in the Vuelta two years ago. On August 27 in 2019 he won the sprint in El Puig and will be looking for his fifth Vuelta stage today. 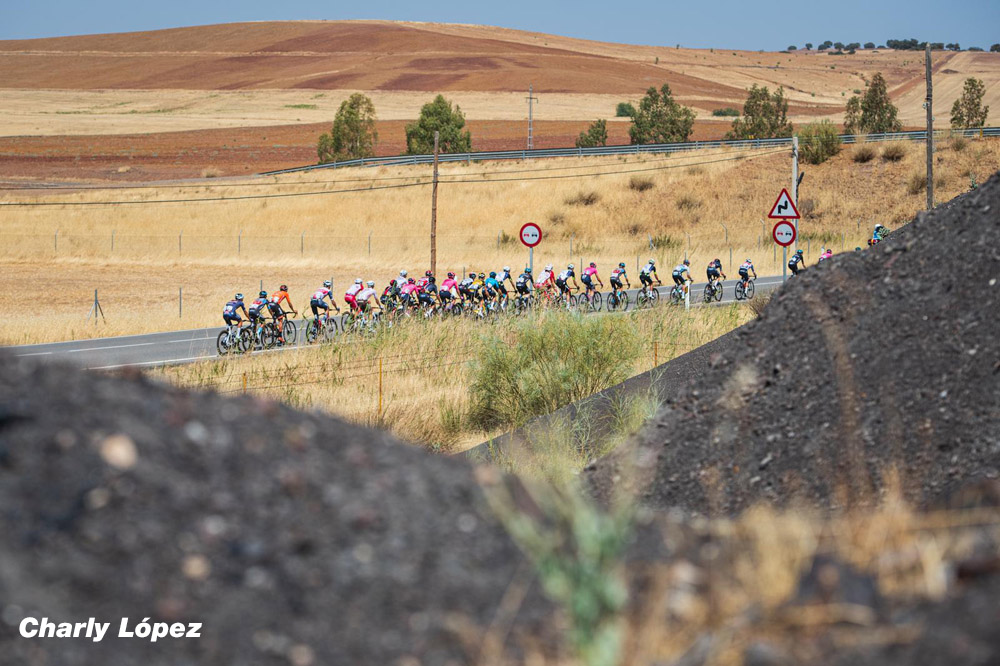 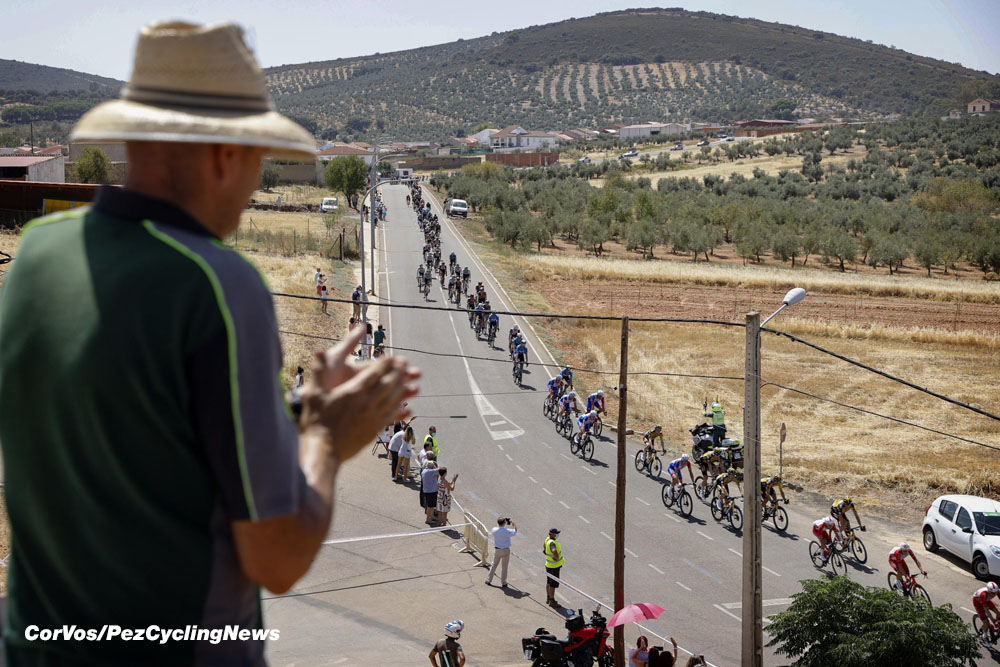 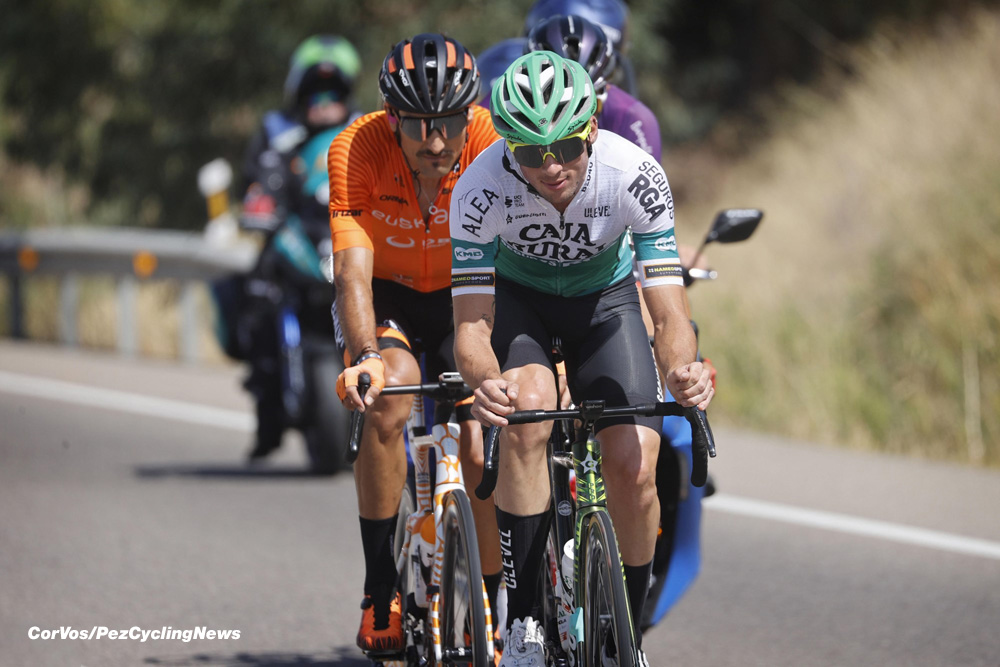 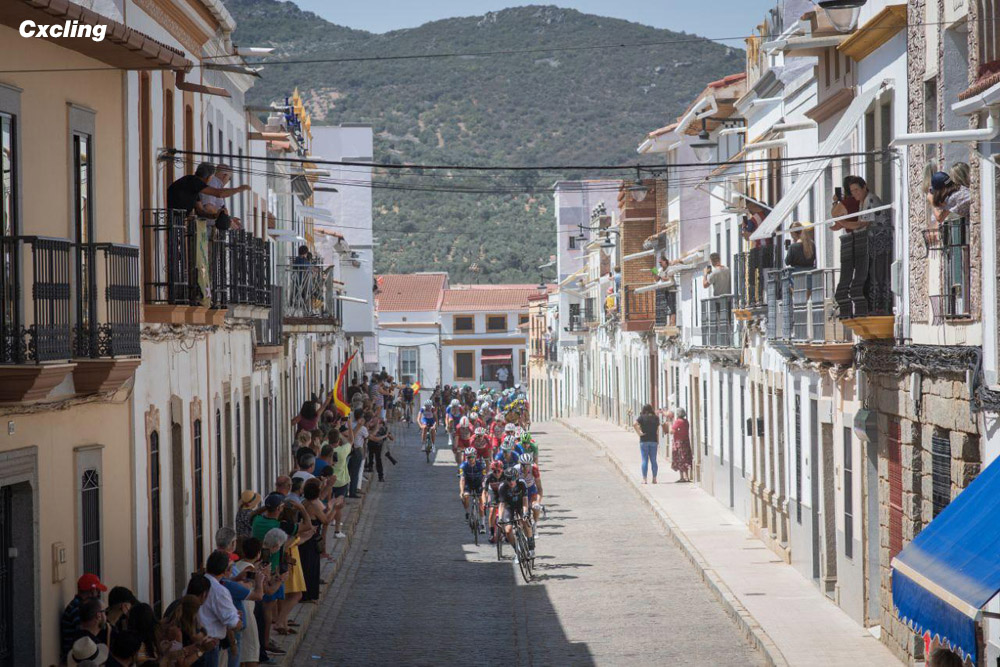 Everyone was looking for some shade

The only intermediate sprint of the day was in Don Benito, 13 kilometres out. Apart from green jersey of Fabio Jakobsen, and his teammate, Bert Van Lerberghe, were interested, so all 20 points went to the Deceuninck – Quick-Step sprinter. 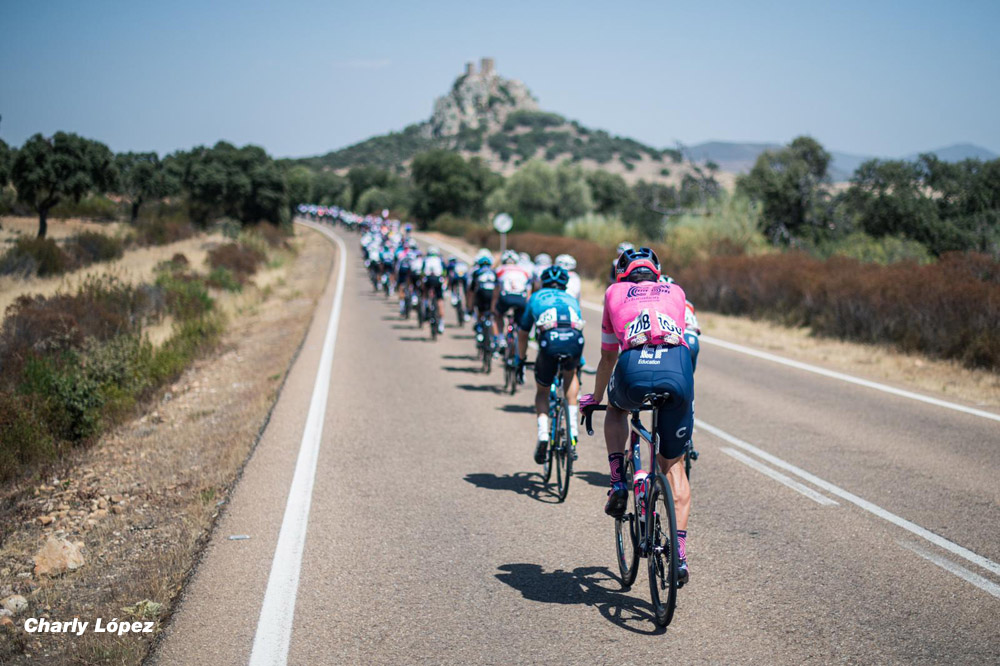 Border country between Spain and Portugal, so lots of castles 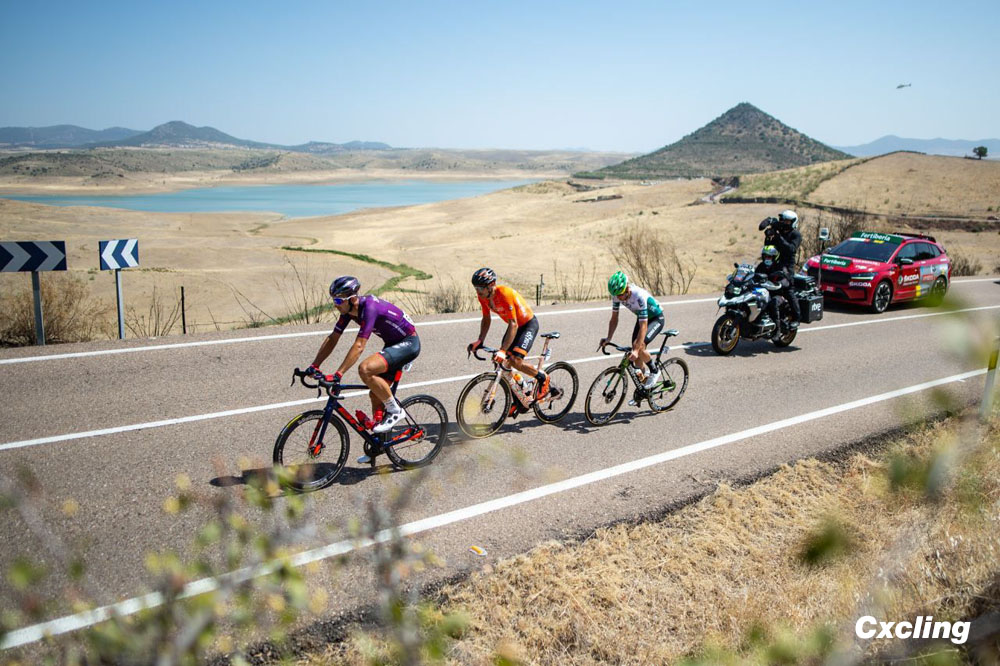 The break only had 22 seconds at one point due the wind, but it was too soon

The Belgian team took control in the last 3 kilometres and Jakobsen’s lead-out train pulled the peloton into a long line and caused gaps in the twisty final. As the speed ramped up Jakobsen had to let his train go at 1.5 kilometres from the finish and could not compete for the stage win. Only fifteen riders had a chance of winning the stage due to the pace of Deceuninck – Quick-Step in the last kilometre. 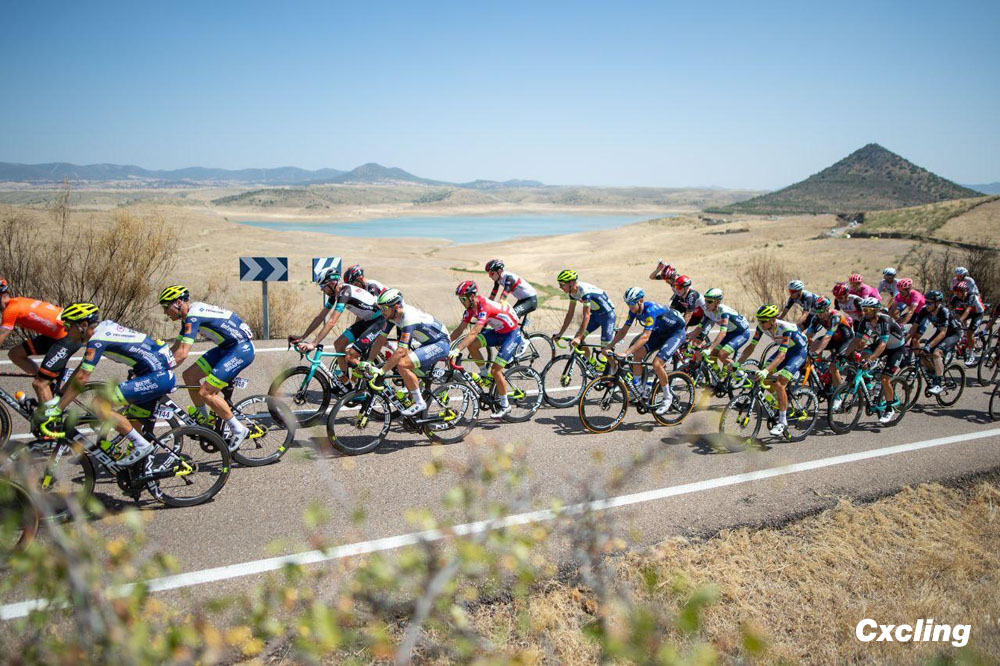 Not much water in the reservoir 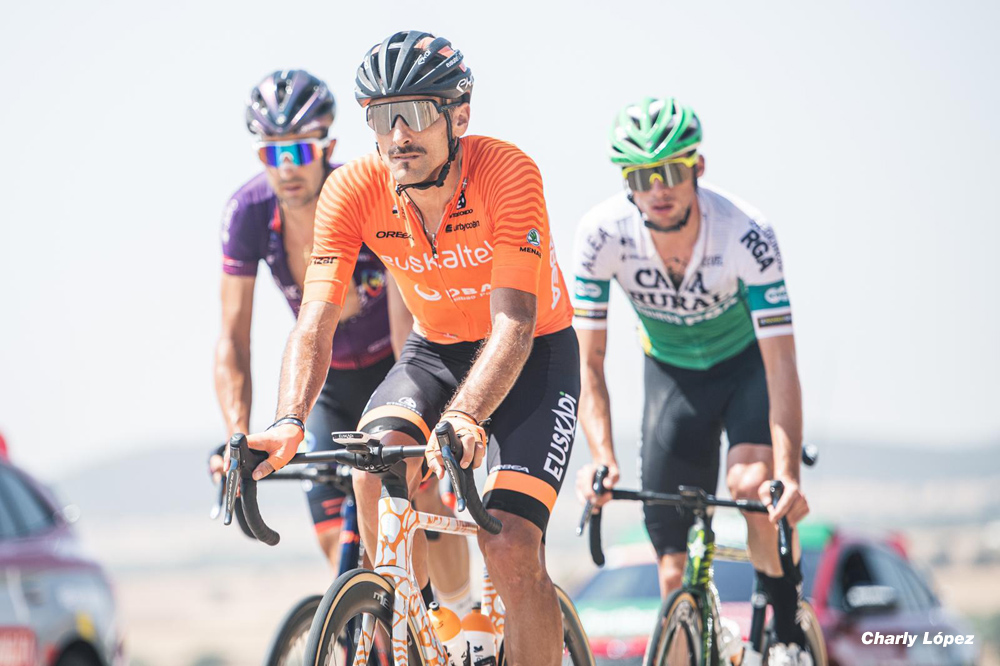 It was only a matter of time

Sacha Modolo was the first to jump, but he had gone far too early and it turned out to be a sprint battle between Florian Sénéchal and Matteo Trentin. In the slightly uphill finish, the Frenchman was faster than the Italian. 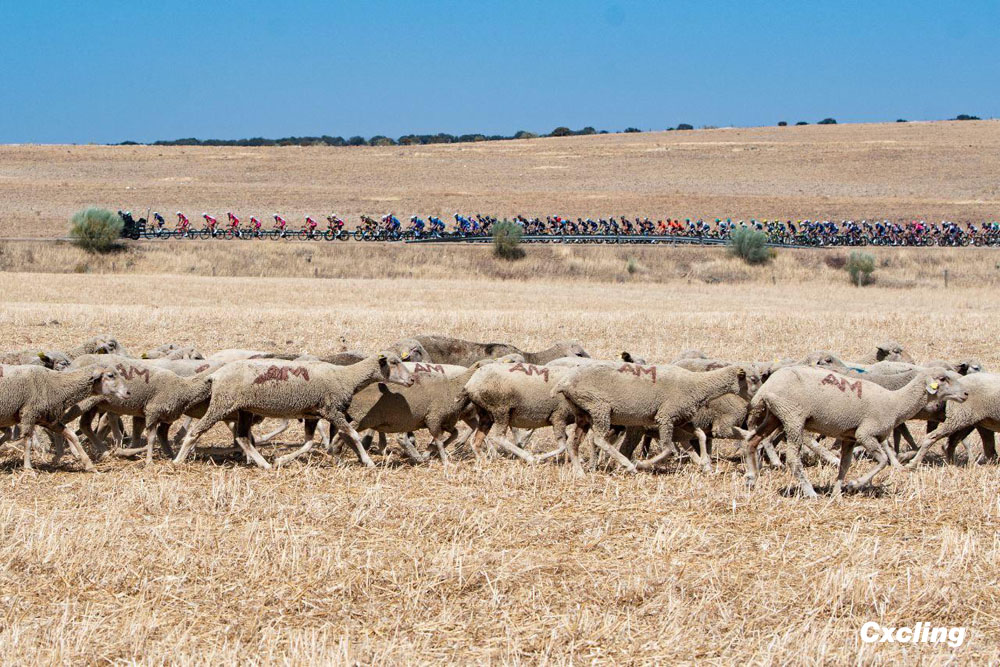 These bike fans were not worried about the sun 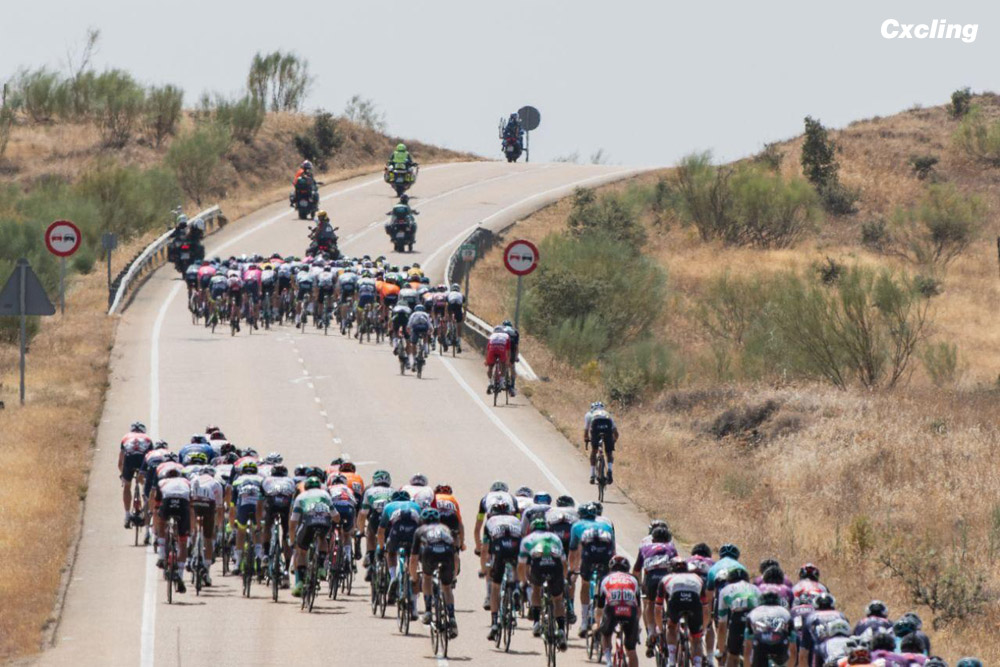 There were echelons, but they didn’t cause an upset 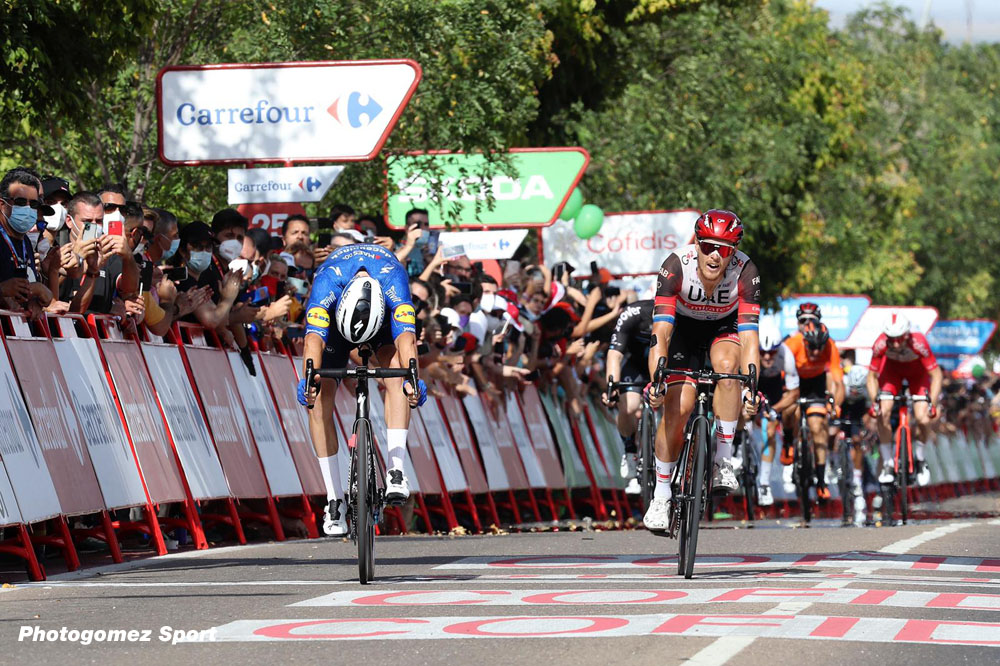 The sprint went to the right team, but it was Florian Sénéchal

Stage winner, Florian Sénéchal (Deceuninck – Quick-Step): “We did a perfect lead-out for Fabio [Jakobsen], and he said on the radio: ‘Florian, you can sprint!’ So we waited. Bert van Lerberghe did a superb job, I stayed calm and I gave the maximum in the last 200m. I think Fabio had a flat tyre. I don’t realise yet that I’ve won a Grand Tour stage. It’s crazy. At first, I thought Démare was gonna pass me, or Matthews, I don’t know… But nobody did. I don’t know to thank my teammates. They did a crazy job to put me in the perfect position. A thousand thanks. I am lucky today and I’m very happy for my family, my friends and my wife. It’s a good present.” 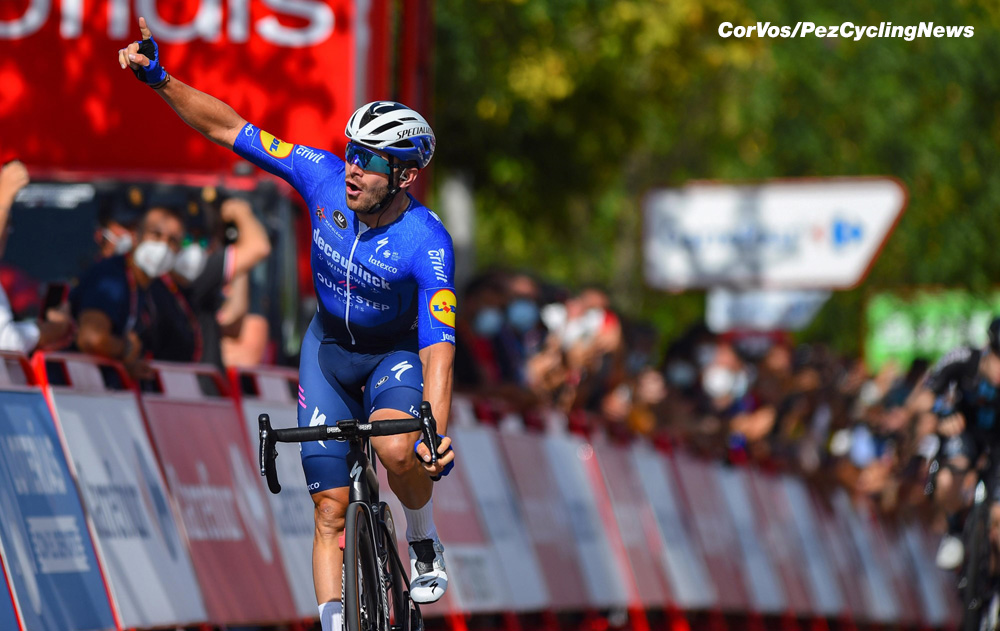 The first Grand Tour win for the Frenchman 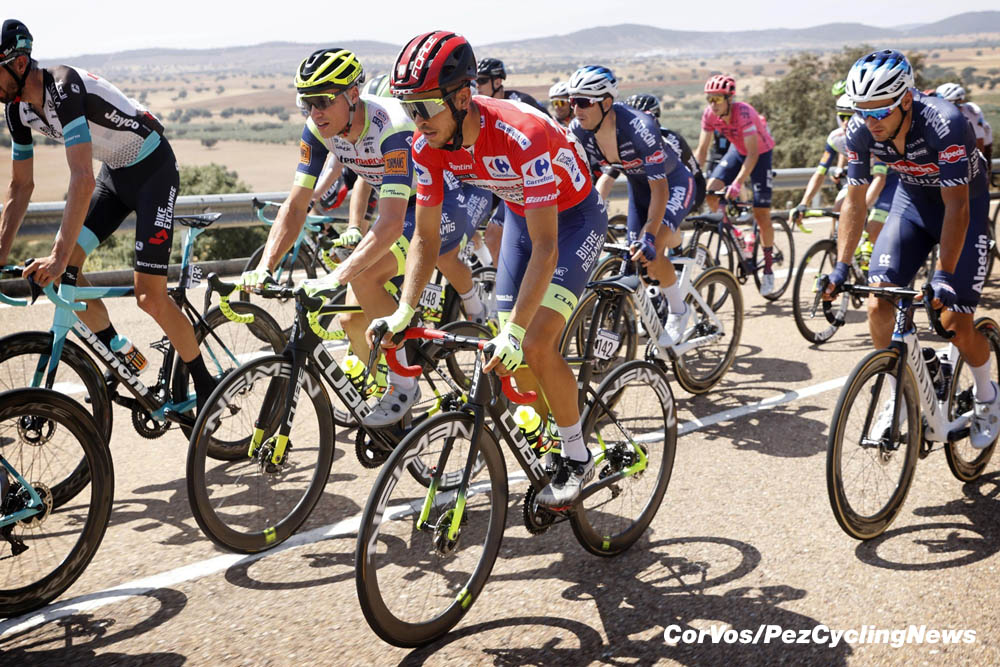 Overall leader, Odd Christian Eiking (Intermarché-Wanty-Gobert Matériaux): “It was a more hectic finalé than I thought it would be. I knew about the roundabouts but I didn’t know it would be that decisive. I’m happy I didn’t lose too much time. Luckily I had perfect teammates. They did an amazing job towards the end so I just had to follow. There was a small split but without damage for me. I want to try and keep the red jersey tomorrow but it depends mostly on Roglic. If he decides to stand up and go for it, it’s gonna be difficult but if I’m lucky and if I have the legs I can keep fighting for the jersey.”