Stage and KOM for Bardet

Vuelta Stage Report: Stage 14 to Pico Villuercas was a day of two battles with the break fighting for the stage win and the GC men punching it out in the peloton. Star of the day was DSM’s Romain Bardet who won the stage and took the KOM jersey. Miguel Angel López tried to mix things up for Movistar, but Jumbo-Visma were in control and Odd Christian Eiking (Intermarché-Wanty-Gobert Matériaux) held the overall lead.

The fourteenth stage of the Vuelta a España fell to frenchman Romain Bardet. The DSM rider was the strongest from the break on the ramps of the Pico Villuercas and brought his team’s victory count to three on this Grand Tour. He also moved into the lead of the mountains competition. 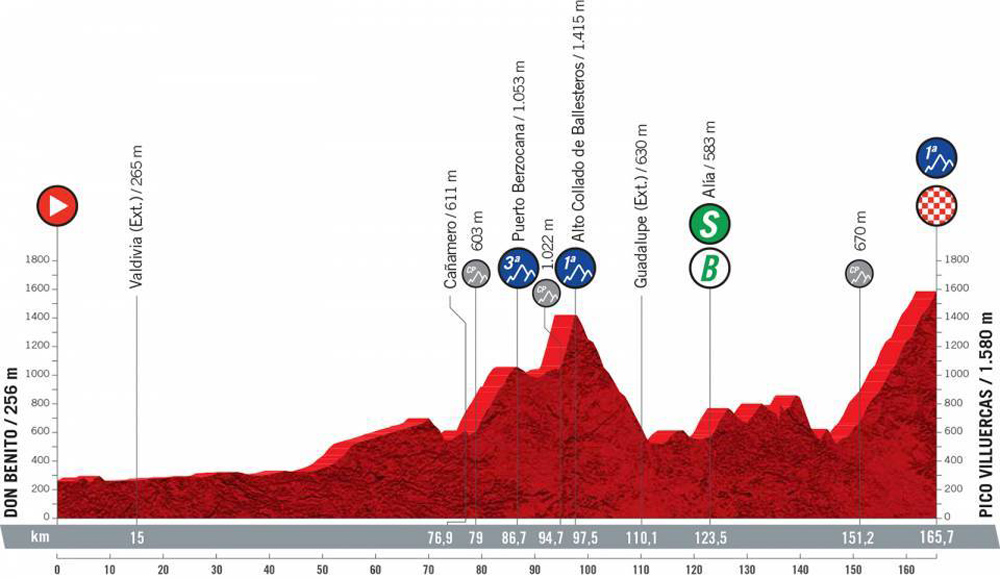 Technical director, Fernando Escartín: “The first half of the stage will be flat, but the second will be very tough, with two climbs of the Pico Villuercas. The first one will happen along three kilometres of concrete with an inclination of 15%. The second, from Guadalupe to the finish-line, is longer. A stage to mark differences in the overall classification.” 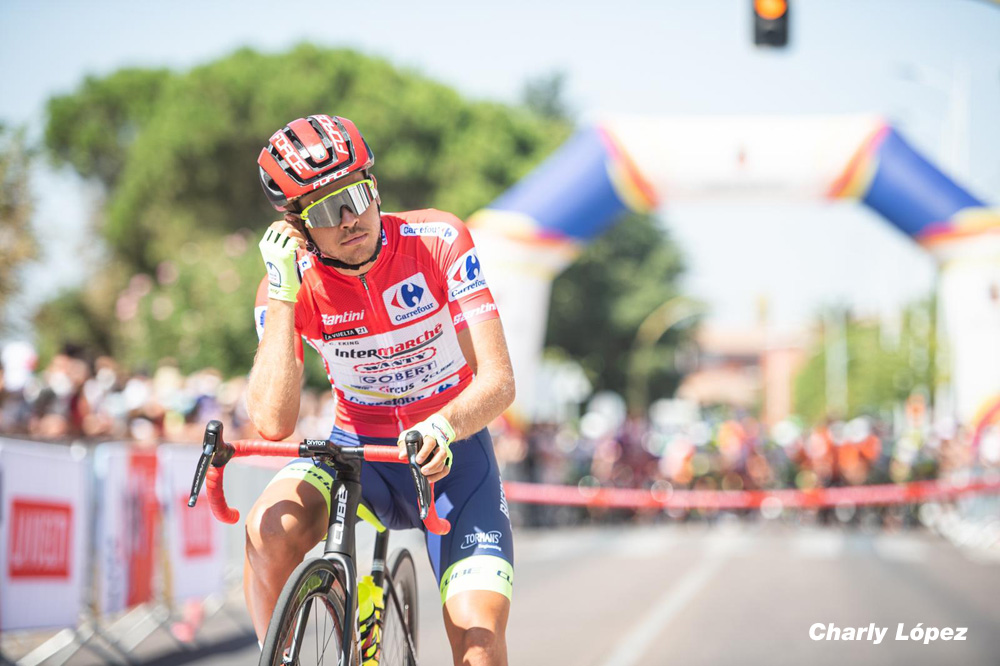 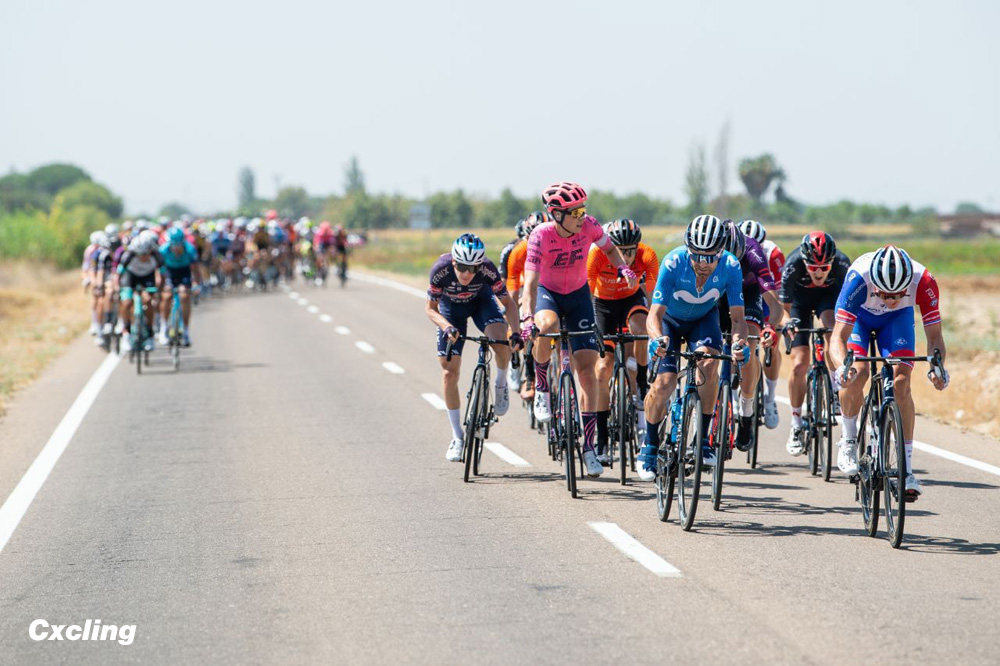 Many riders wanted to be in the break 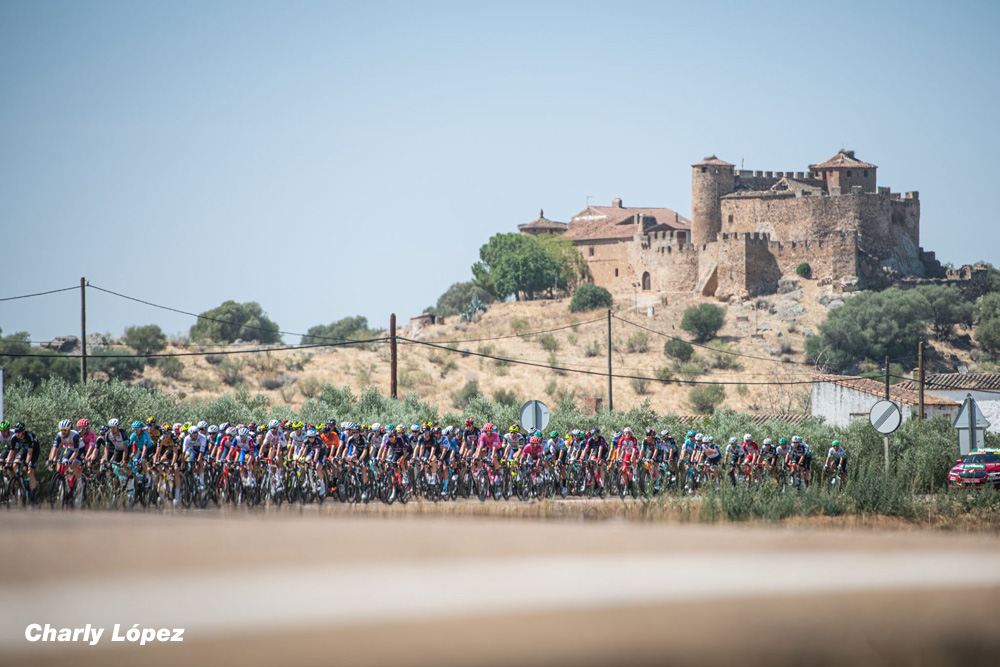 Saturday was a mountain stage, the first of a hard weekend’s racing. The final climb of the Pico Villuercas (14.5km at 6.2%) could have been a battle ground for the GC men… but it wasn’t. Primoz Roglic, Enric Mas and Miguel Angel López watched each other in the finalé. The break escaped early in the day and racked up a lead of over 11 minutes. 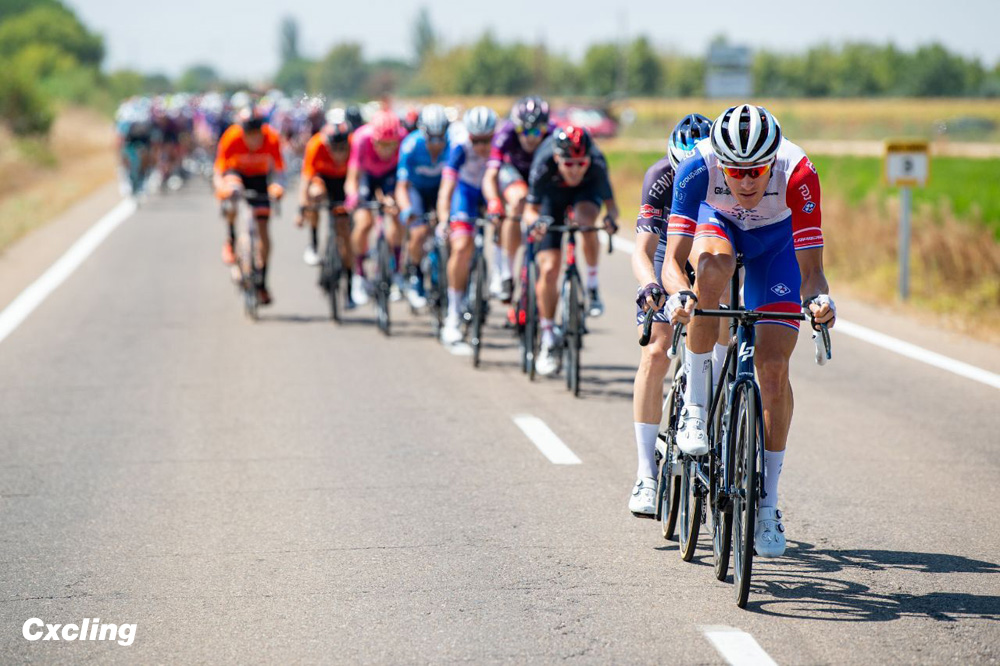 More than 8 minutes for the break after an hour 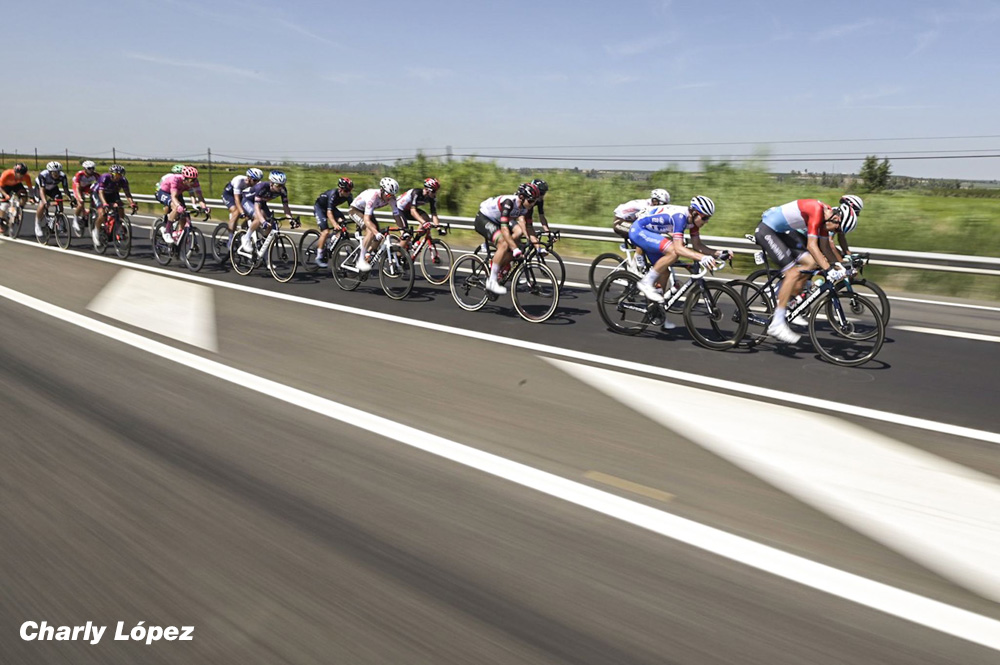 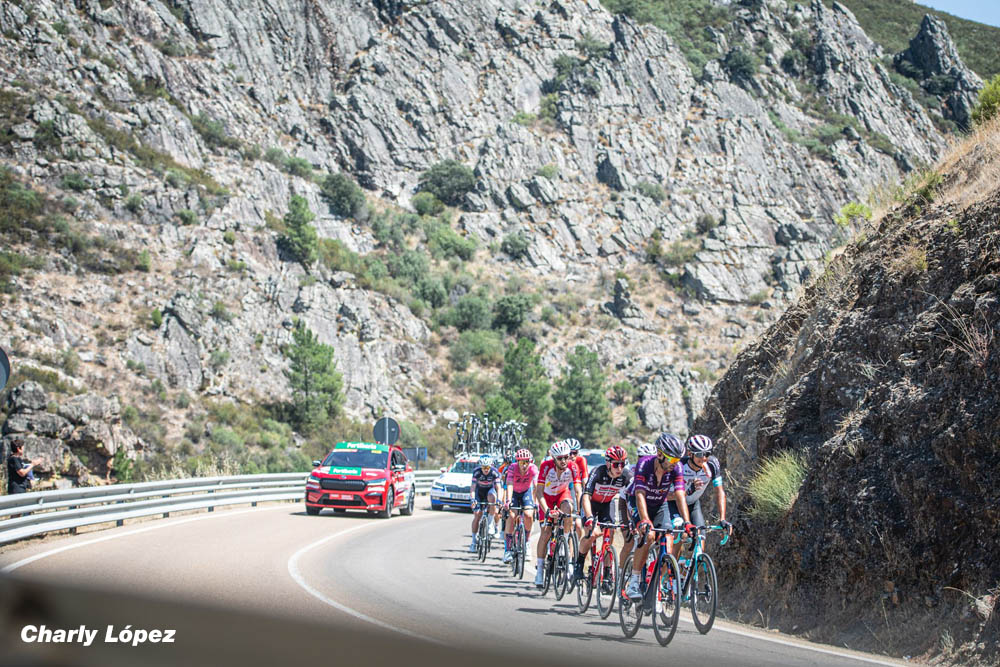 WorldTour teams were in the break today 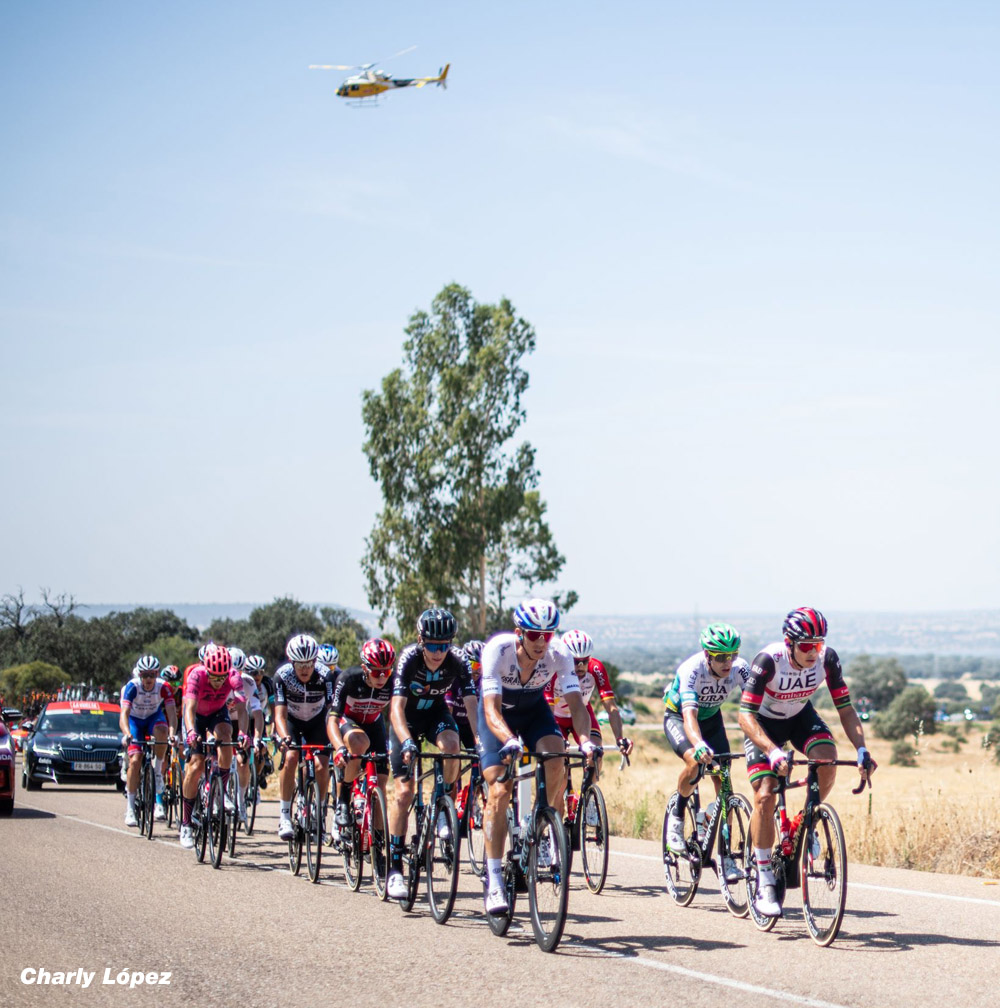 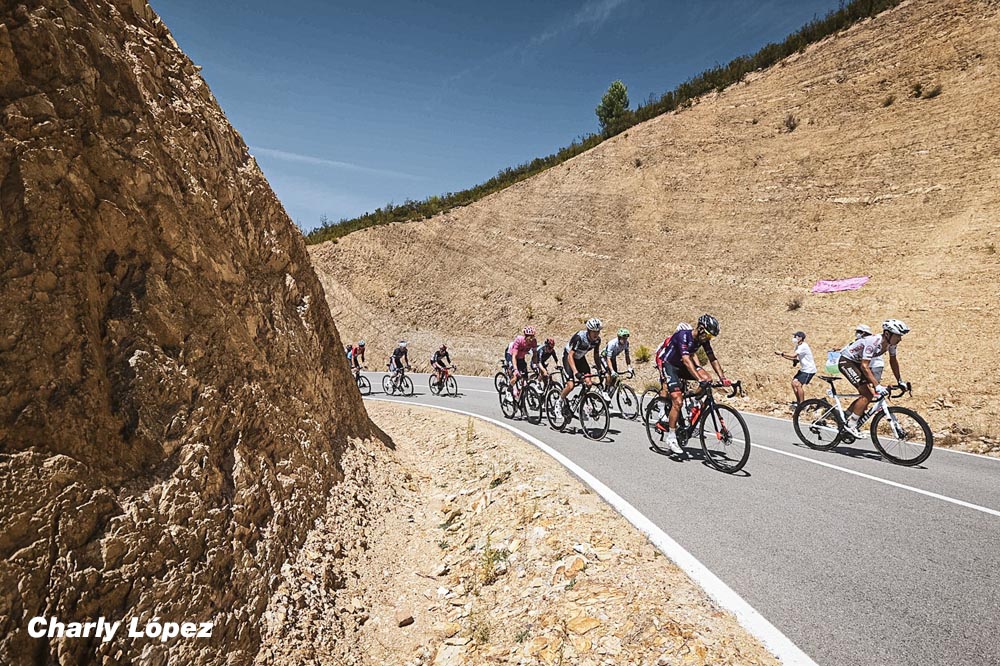 Another hot day in Spain

Before the final climb, the stage was fairly uneventful. The predicted fireworks on the Puerto Berzocana and the very steep Alto Collado de Ballesteros didn’t happen in the peloton due to the control of the Jumbo-Visma team and fear of the final climb. In the last 50 kilometres three riders at the front attacked before the climb to Pico Villuercas. Prodhomme, Navarro and Holmes broke away from the large leading group to start the last climb of the day with a lead, but it was Prodhomme who hit the climb solo. 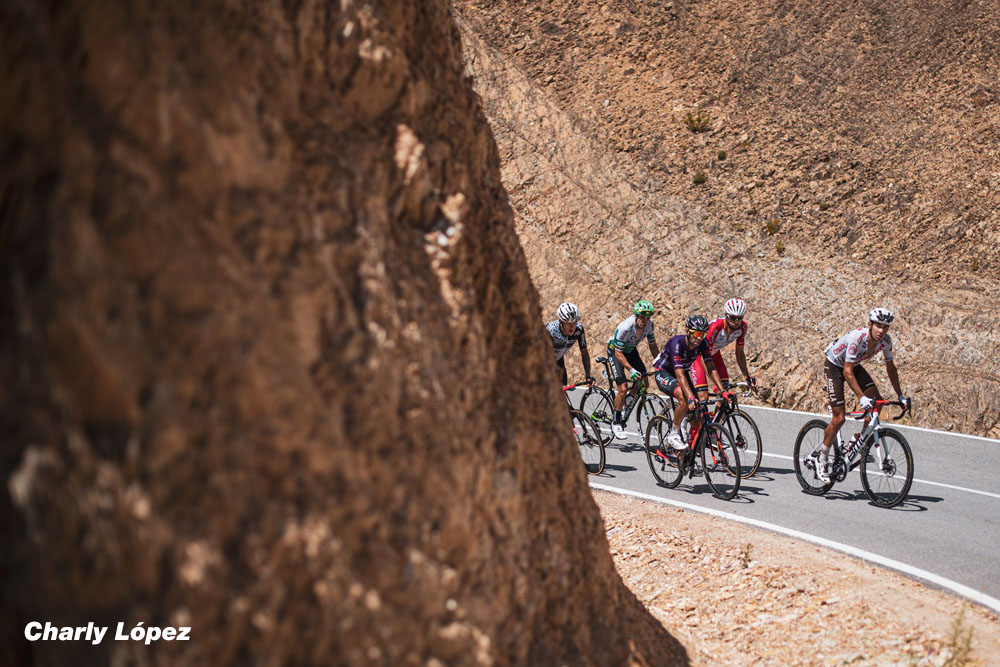 Can the break go to the finish? 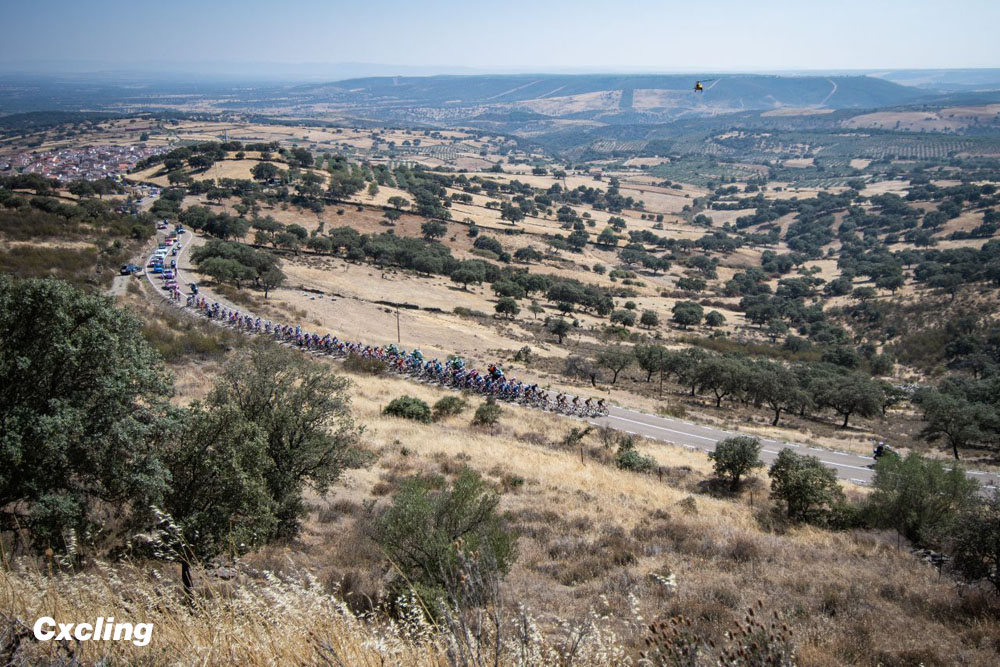 The peloton was not in much of a hurry

A puncture for Holmes ruined his chances, and Prodhomme and Navarro were caught within 10 kilometres. The AG2R Citroën Frenchman then attacked again and started the 14.5 kilometre final climb with just over a 1 minute lead. 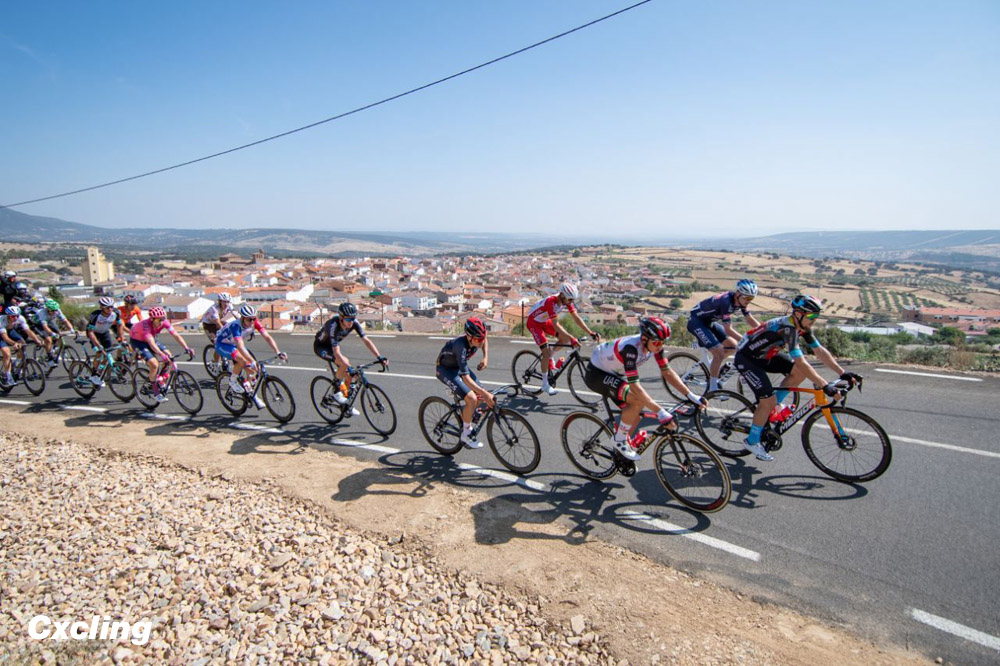 The break starting to climb the Collado de Ballesteros 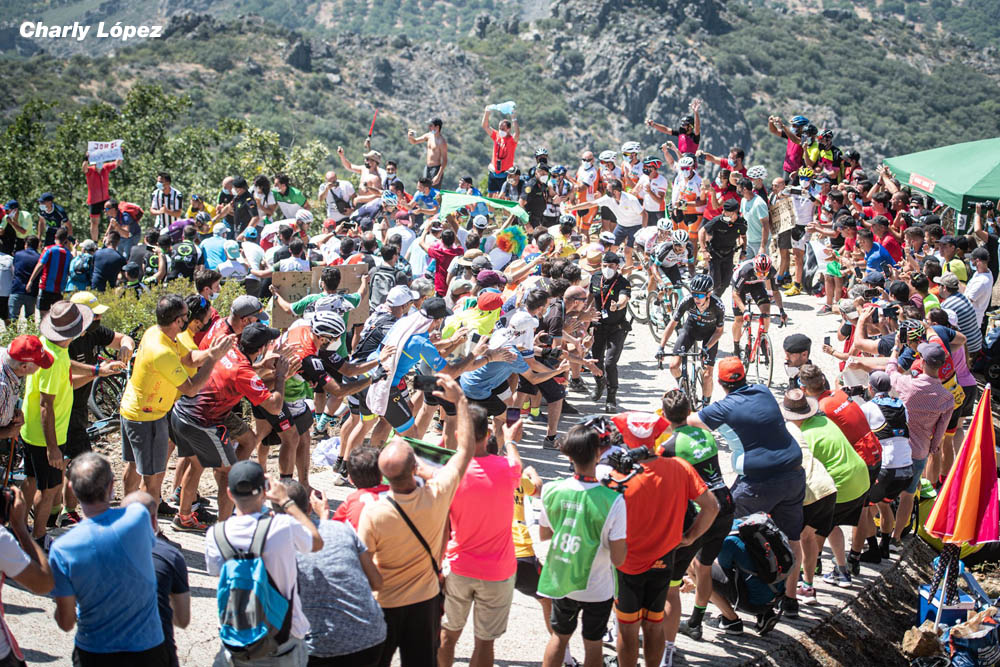 The fans were out

Prodhomme held up well on the Pico Villuercas. At first his lead grew, as Bardet jumped away from Pidcock, Holmes, Vine, Geniets and Champoussin. Between the group of Bardet and Prodhomme was Zeits who had counter-attacked early on the climb. 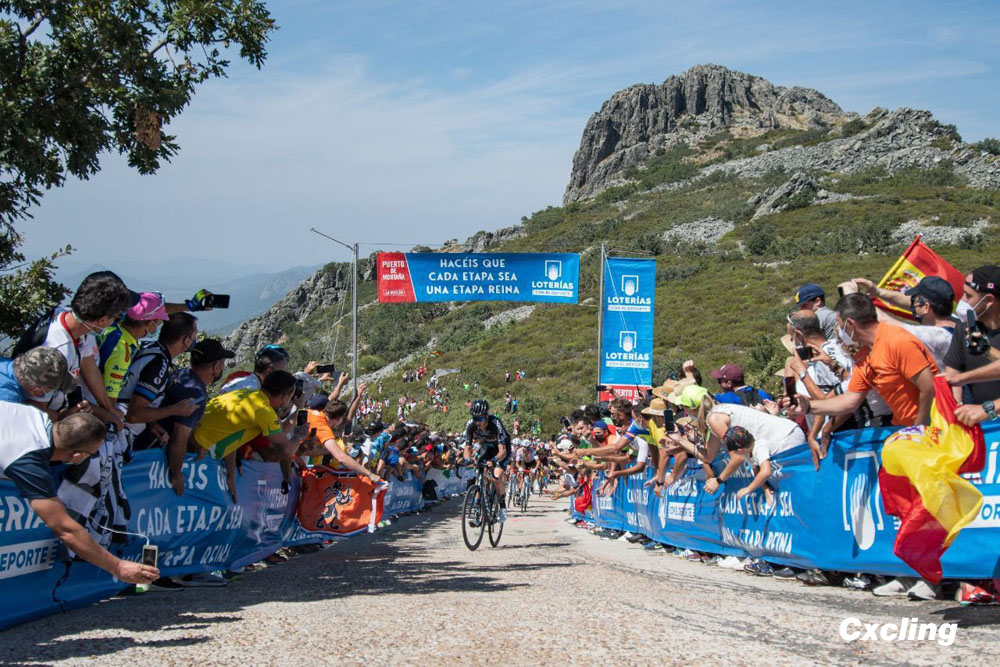 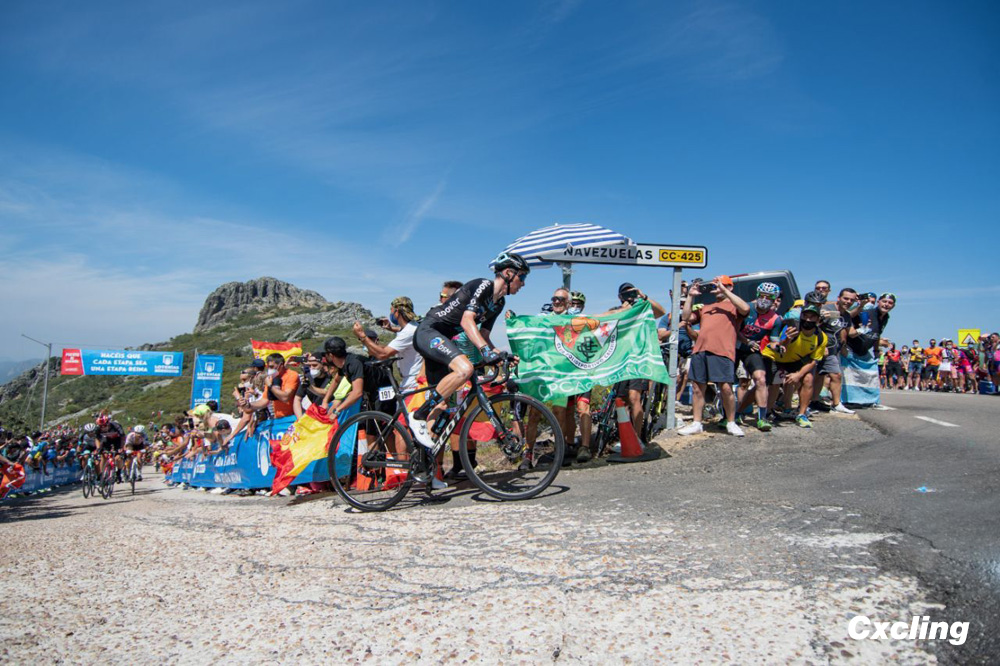 Bardet took over the KOM competition 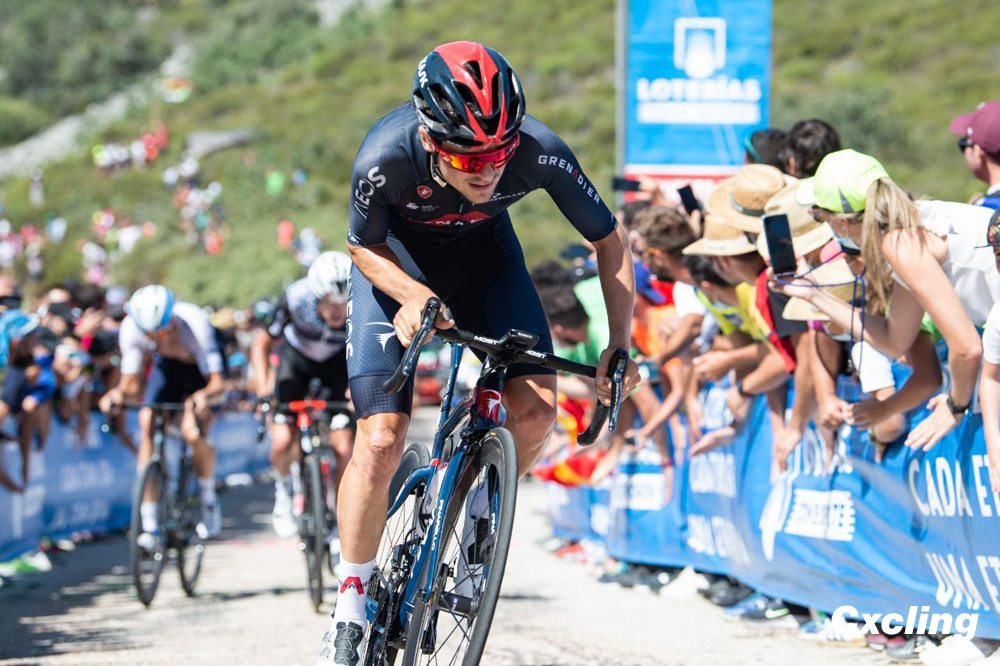 Tom Pidcock on the climb of the Alto Collado de Ballesteros

With 6 kilometres to go, Bardet threw himself into his race winning effort. After a good attack, he closed the gap to Zeits and Prodhomme. The DSM rider then rode on to solo victory, as his lead increased to almost 1 minute in the last kilometres. Vine and Herrada counter-attacked, but they couldn’t get close and had to make do with second and third. 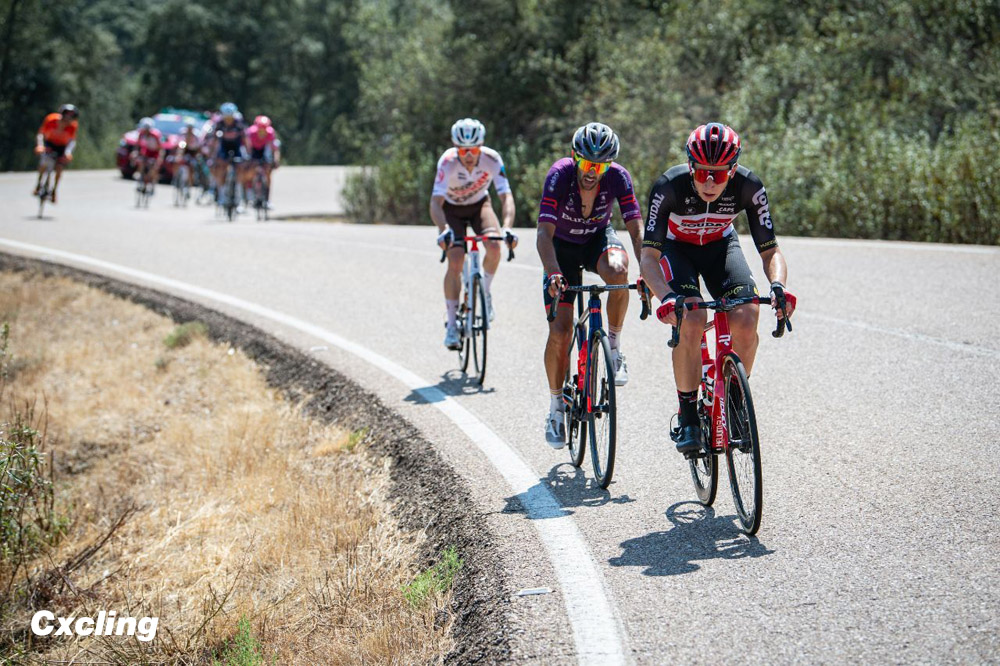 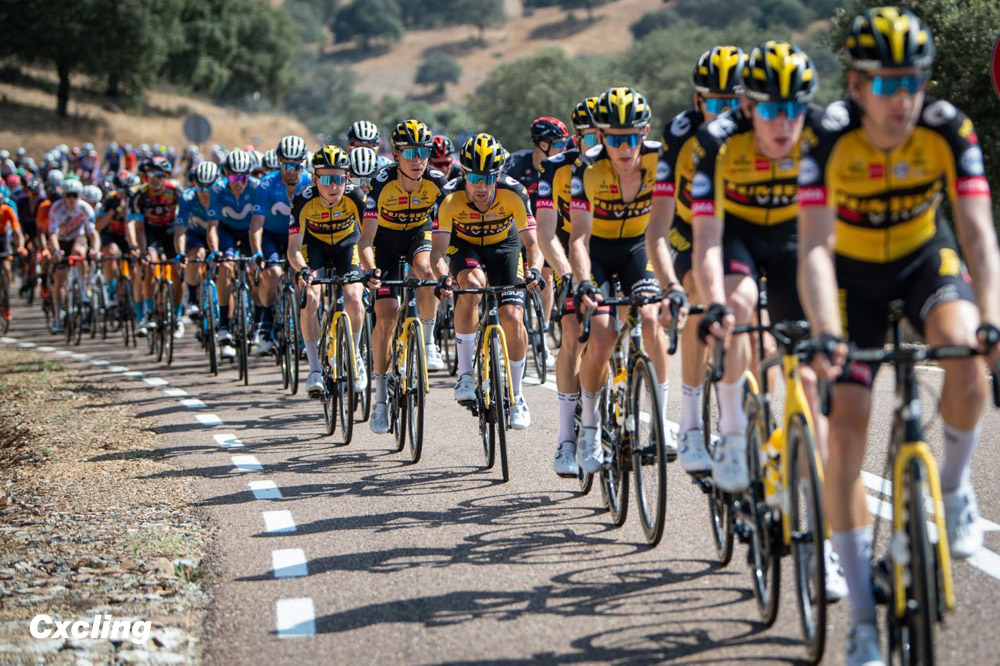 Jumbo-Visma were in control of the peloton, but were not too interested in the chase 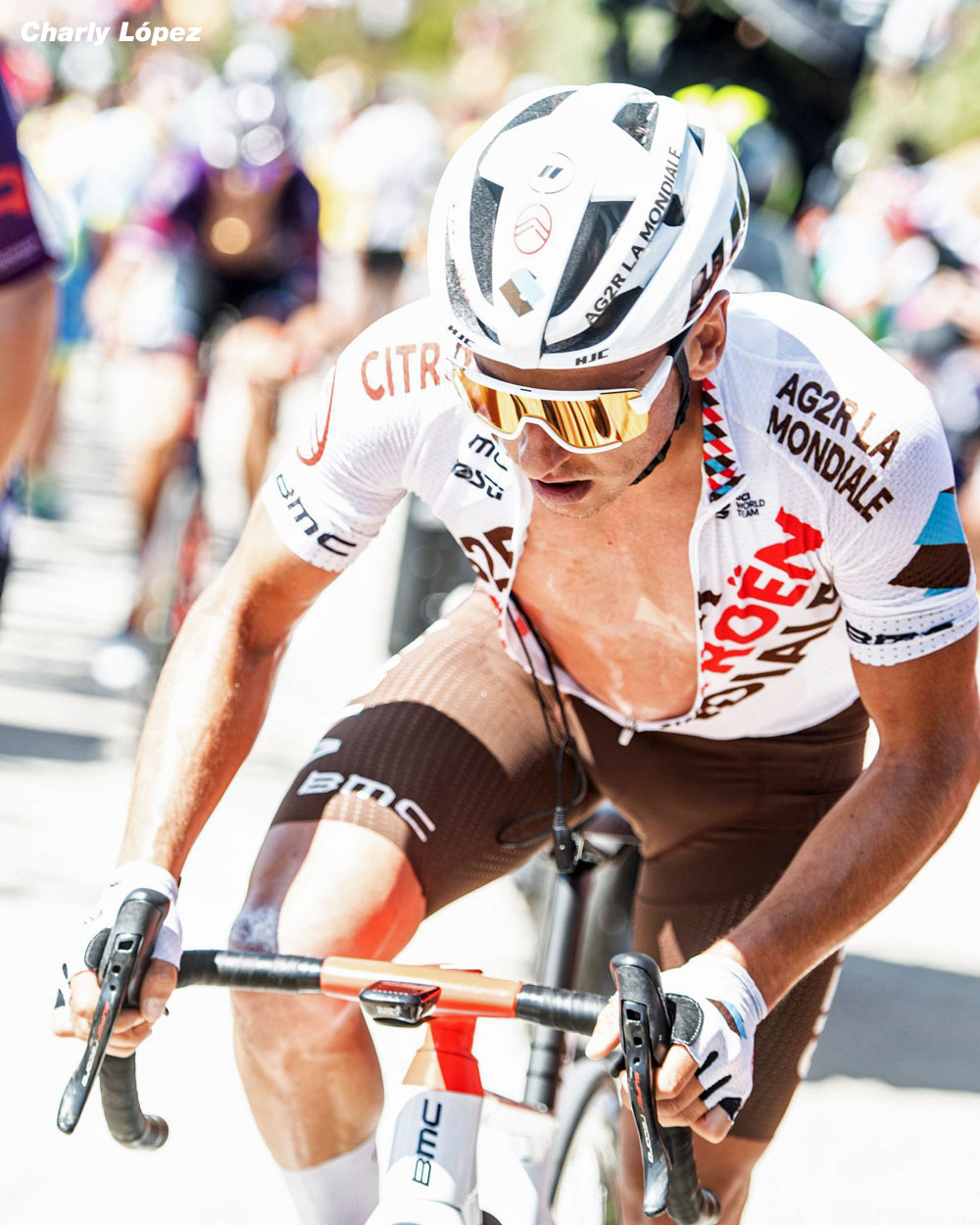 AG2R Citroën had Prodhomme and Champoussin in the break

The favourites waited a long time before making any move. López went at 3 kilometres out and made a good gap, but in the last metres Roglič pulled him back to 4 seconds. Overall leader, Odd Christian Eiking (Intermarché-Wanty-Gobert Matériaux), managed to hold on to the GC men’s group, losing only a few seconds to keep the red jersey for another day. 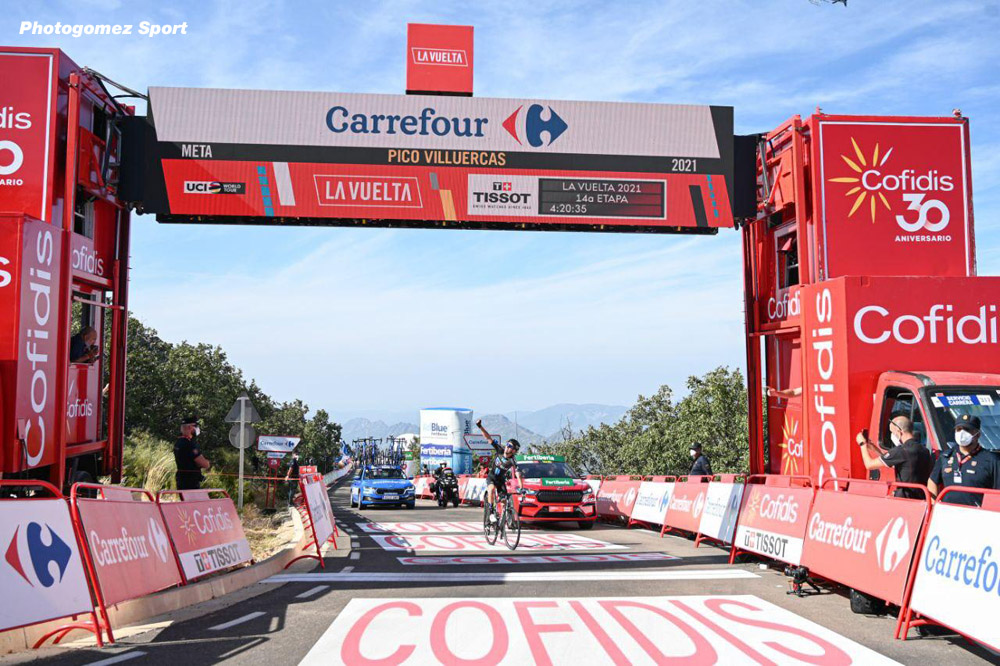 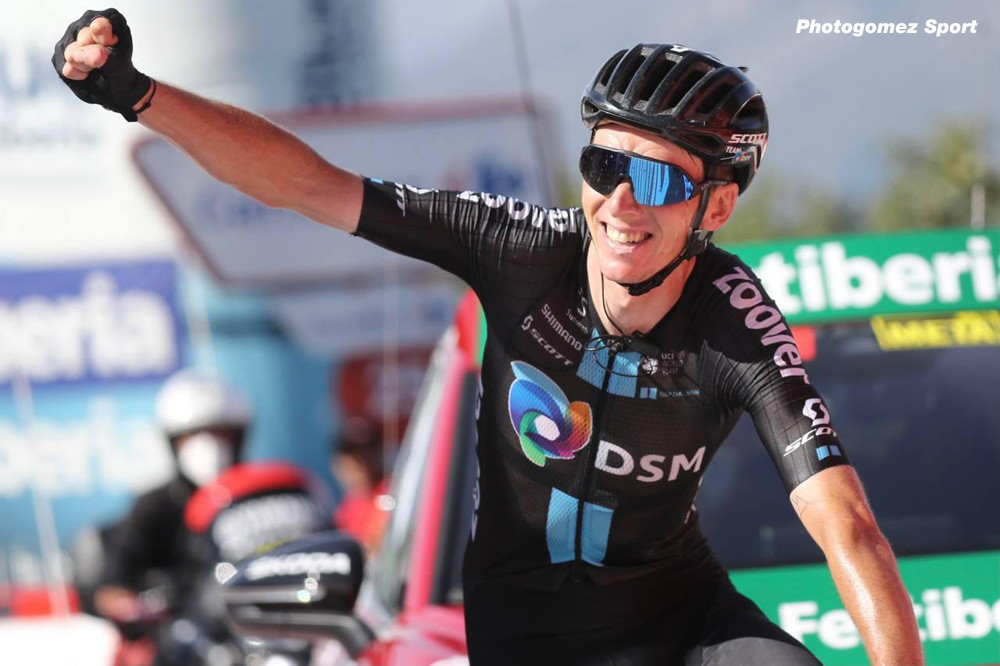 Stage winner and KOM, Romain Bardet (DSM): “Honestly, I really took step by step. In the end, no one really wanted to commit to the chase in the breakaway so I had a really hard time to catch [Nicolas Prodhomme]. But I think we really played it smart with Matt [Winston], my sports director. He told me exactly when to attack, on the steepest part. I went as if the finish was 200m away. I gave it a good go, I opened a good gap and I just committed to the finish. The legs were ok I think. Everyone is a bit tired I think, but at the moment, the spirit is great in the team. Wee have three stage wins, multiple podiums with Alberto [Dainese]. I’m so happy to be part of such a group. We try to do our best everyday and this stage win is an amazing one. It’s been a long wait [since my last Grand Tour victory, in 2017]. I didn’t think about it today, I just focused on giving it my all. It went well from the start. I knew that I would have the polka-dot jersey even if I didn’t win.” 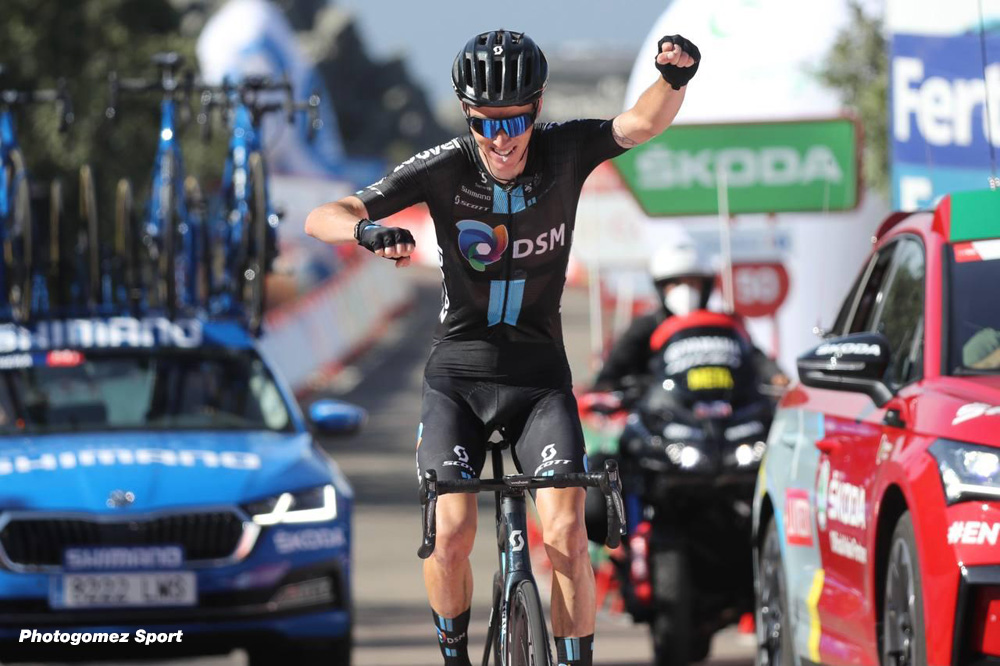 Overall leader, Odd Christian Eiking (Intermarché-Wanty-Gobert Matériaux): “I suffered quite a lot in the end. I felt it was under control most of the day and I hoped it wouldn’t be too hard in the final climb. It wasn’t too steep, so I gambled, trying to stay as much as possible on the wheels. Guillaume Martin, my closest rival, he tried to attack. But I knew it was a lot of headwind. It worked out today. When we passed 3km to go, I had a really good feeling that it would work out. It is possible [to keep the jersey until the rest day]. It depends how the race is tomorrow. Certainly, my legs feel quite good.”