Another stage win for Fabio Jakobsen

Vuelta Stage Report: Stage 16 was a tricky stage for Deceuninck – Quick-Step to control, but in control they were. Their fast-finisher Fabio Jakobsen was even dropped at one point, but they got him back to the front to take the victory. Odd Christian Eiking (Intermarché-Wanty-Gobert Matériaux) held the overall lead.

The sixteenth stage of the 2021 Vuelta a España was won by Fabio Jakobsen. After a twisty 180 kilometres, the Dutch Deceuninck – Quick-Step sprinter was first across the finish line in Santa Cruz de Bezana. Odd Christian Eiking remains the leader on GC.

Technical director, Fernando Escartín: “Last clear stage for the sprinters of La Vuelta 21. It will take place through a territory similar to that of the stage between Castro Urdiales and Suances, in the race’s 2020 edition. This time, however, the winner will be decided in a mass sprint to the finish-line.” 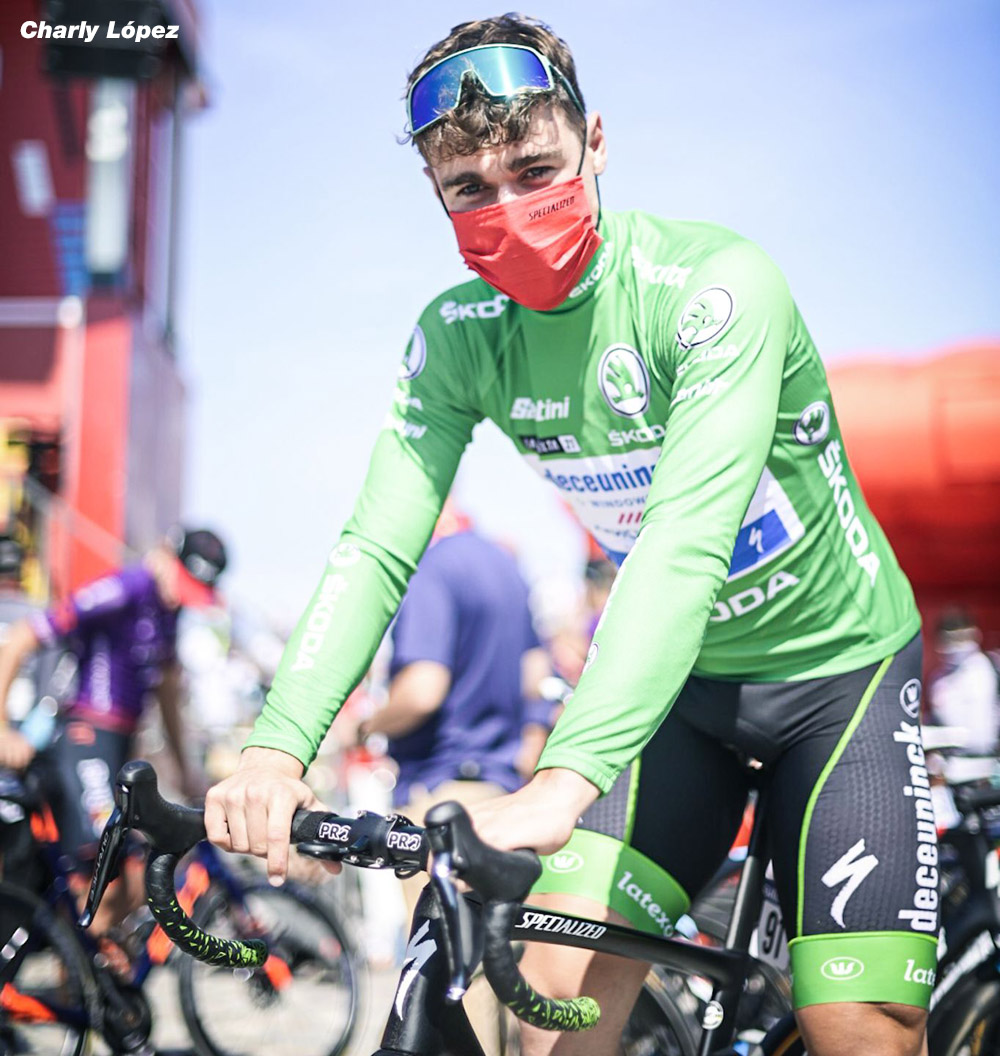 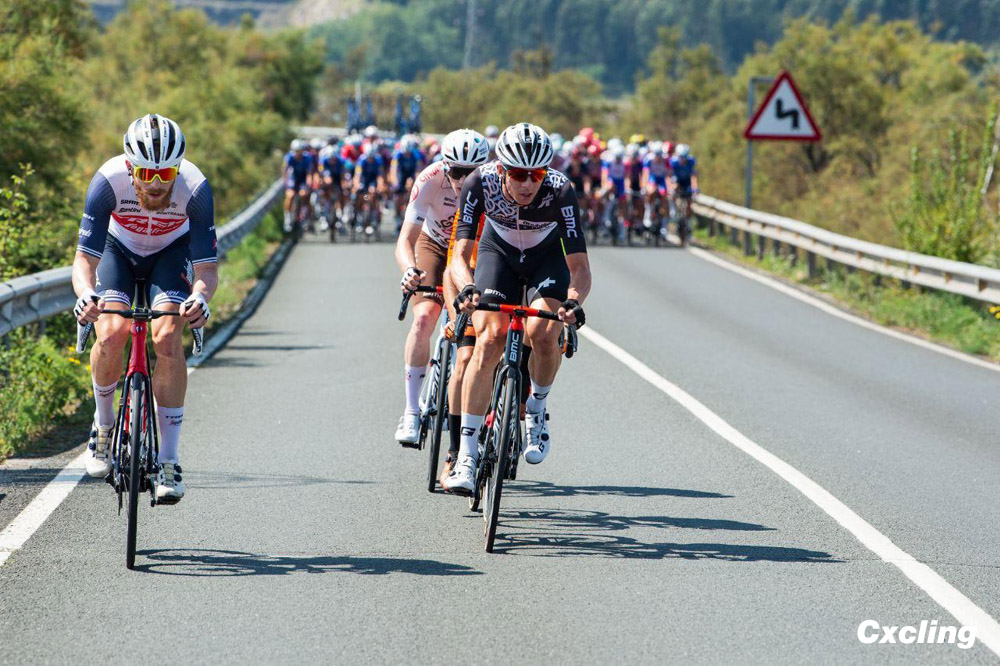 Early in the stage there was a crash including Guillaume Martin and Enric Mas. The Frenchman and the Spaniard escaped unscathed and were quickly able to rejoin the peloton. Giulio Ciccone was also involved, and had some more problems and needed medical help. Four riders managed to escape: Stan Dewulf (AG2R Citroën), Dimitri Claeys (Qhubeka NextHash), Quinn Simmons (Trek-Segafredo) and Mikel Bizkarra (Euskaltel-Euskadi). 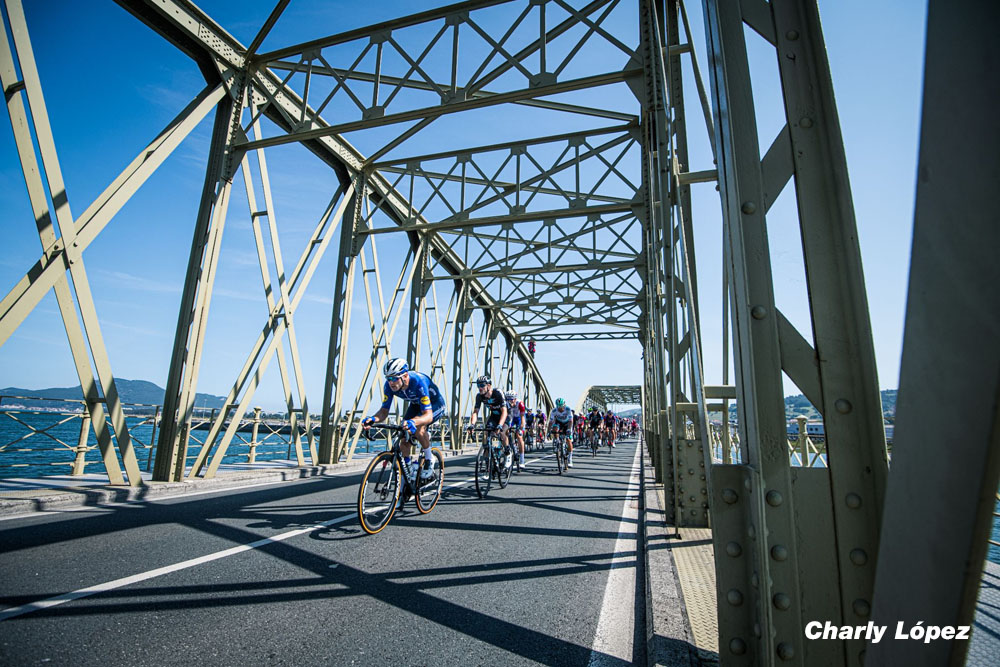 A fifth rider joined later. Jetse Bol missed the first move, but successfully got across. The five leaders never got more than 2 minutes ahead of the peloton, where Deceuninck – Quick-Step, Groupama-FDJ and DSM led the chase. They kept the difference at around one and a half minutes. 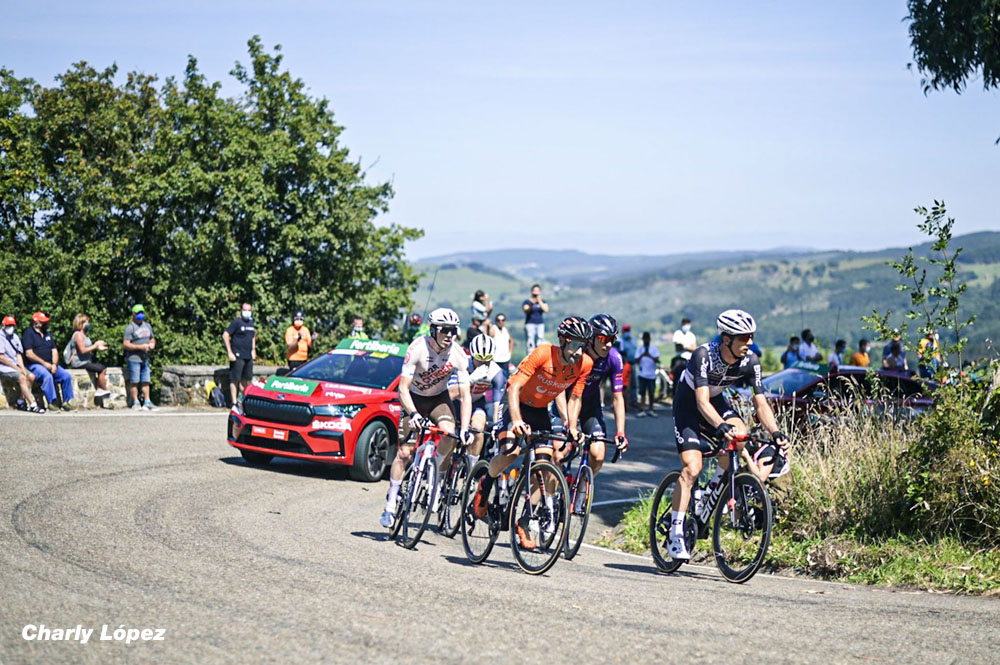 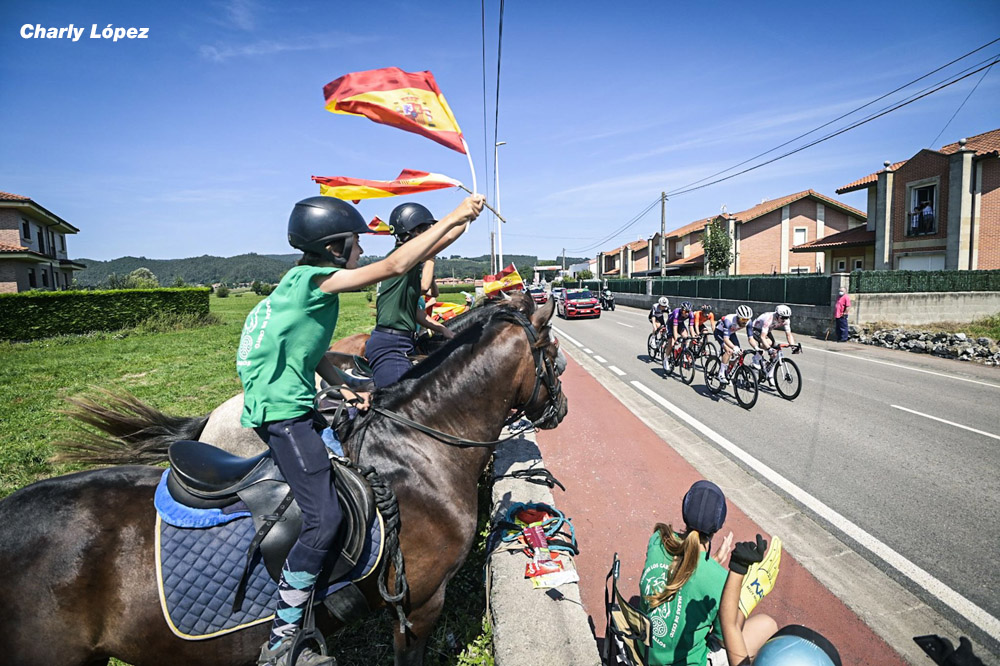 Because the lead was so minimal, Lotto Soudal saw a chance to make the jump on the Cat-3 Alto de Hijas. Harm Vanhoucke and Maxim Van Gils start the attack. Vanhoucke was the stronger of the two and managed to join the five leaders after the descent. The peloton gave the six a two-minute lead, but it quickly declined on the second serious climb of the day: the third category Alto de San Cipriano. 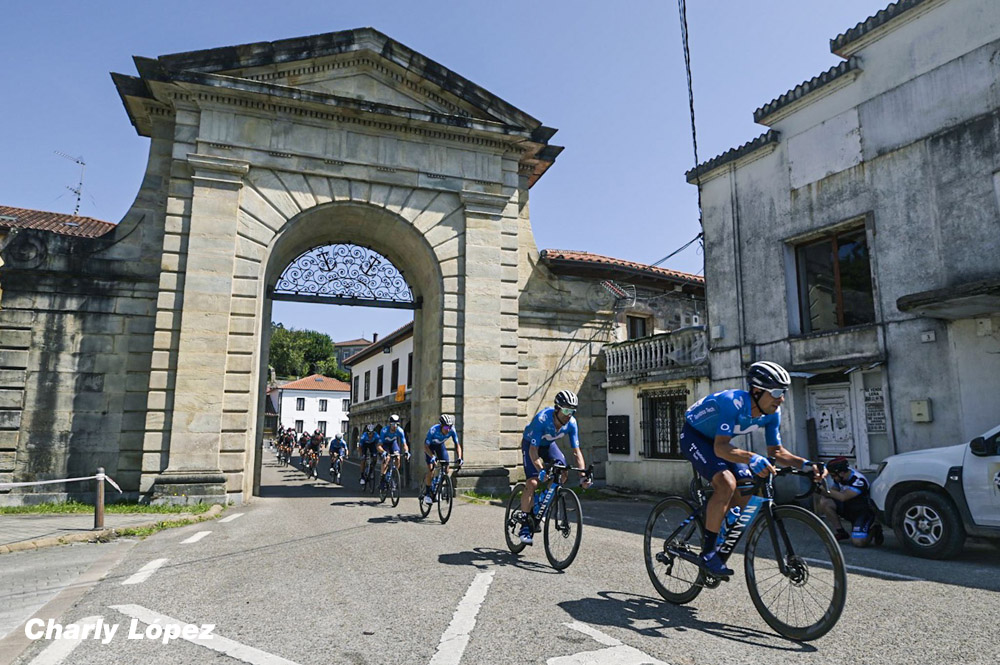 Shouldn’t be a difficult stage for the Movistar team

It was UAE Team Emirates that put the pressure on that short climb. The peloton split into several pieces and Fabio Jakobsen was in the back group. This was one of the reasons Matteo Trentin put his men on the front. With 35 seconds on the Jacobsen group, the peloton came over the top, but the sprinter had a large part of his Deceuninck – Quick-Step team with him. The Belgian team was able to catch the peloton within 5 kilometres. 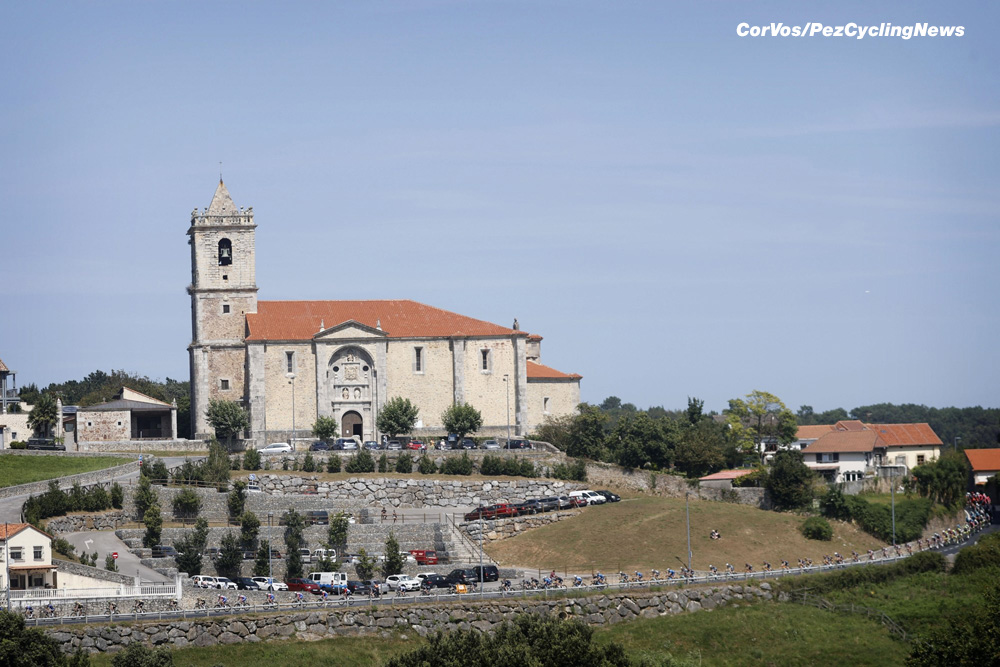 Cantabria in the north of Spain – Very green, unlike the middle and the south 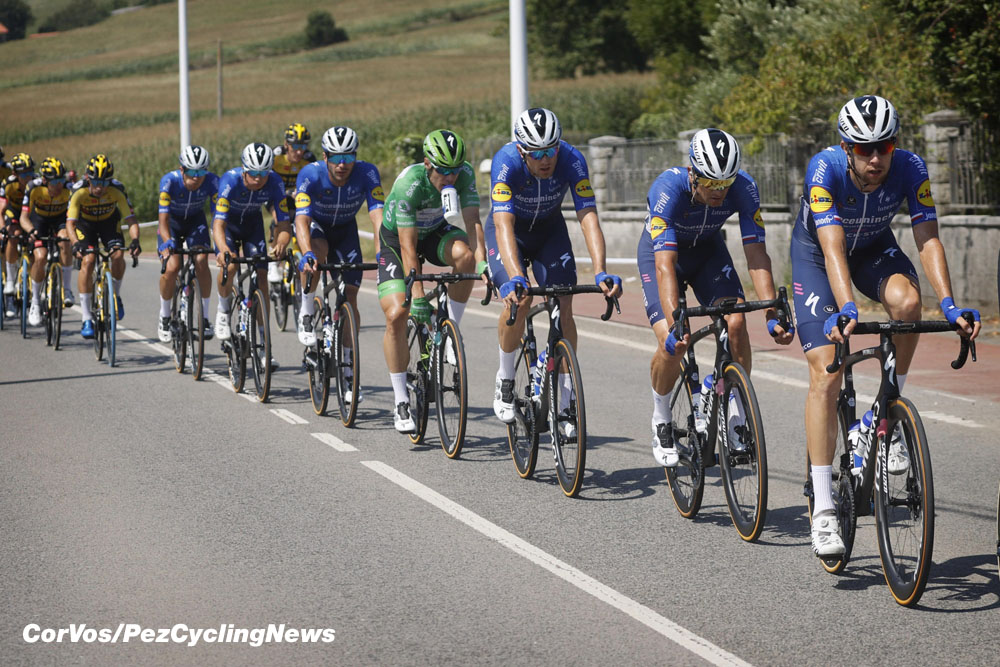 Deceuninck – Quick-Step were looking for a bunch sprint

Despite this, UAE Team Emirates continued to set the pace, but they stopped their work 30 kilometres from the finish. It was then the sprinter’s teams that took matters into their own hands, but the six leaders were not easily taken in. In the finalé there were some short climbs, each about a kilometre long at 5 to 7%. Bol broke up the leading group on one of those climbs, but the peloton was already on their heels 10 kilometres before the finish. 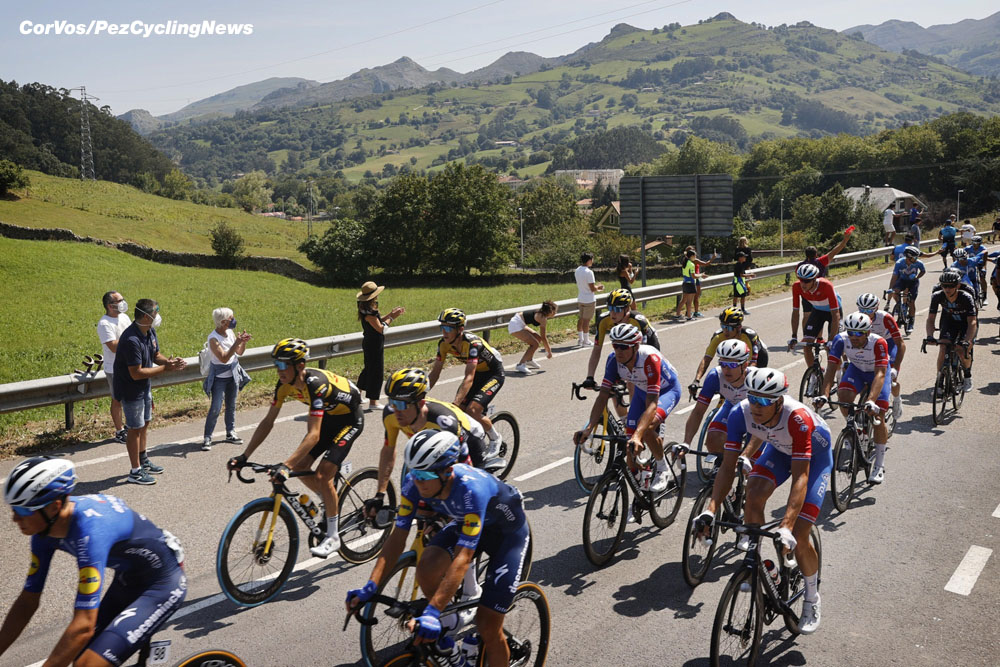 Could Groupama-FDJ get Démare over the line first? 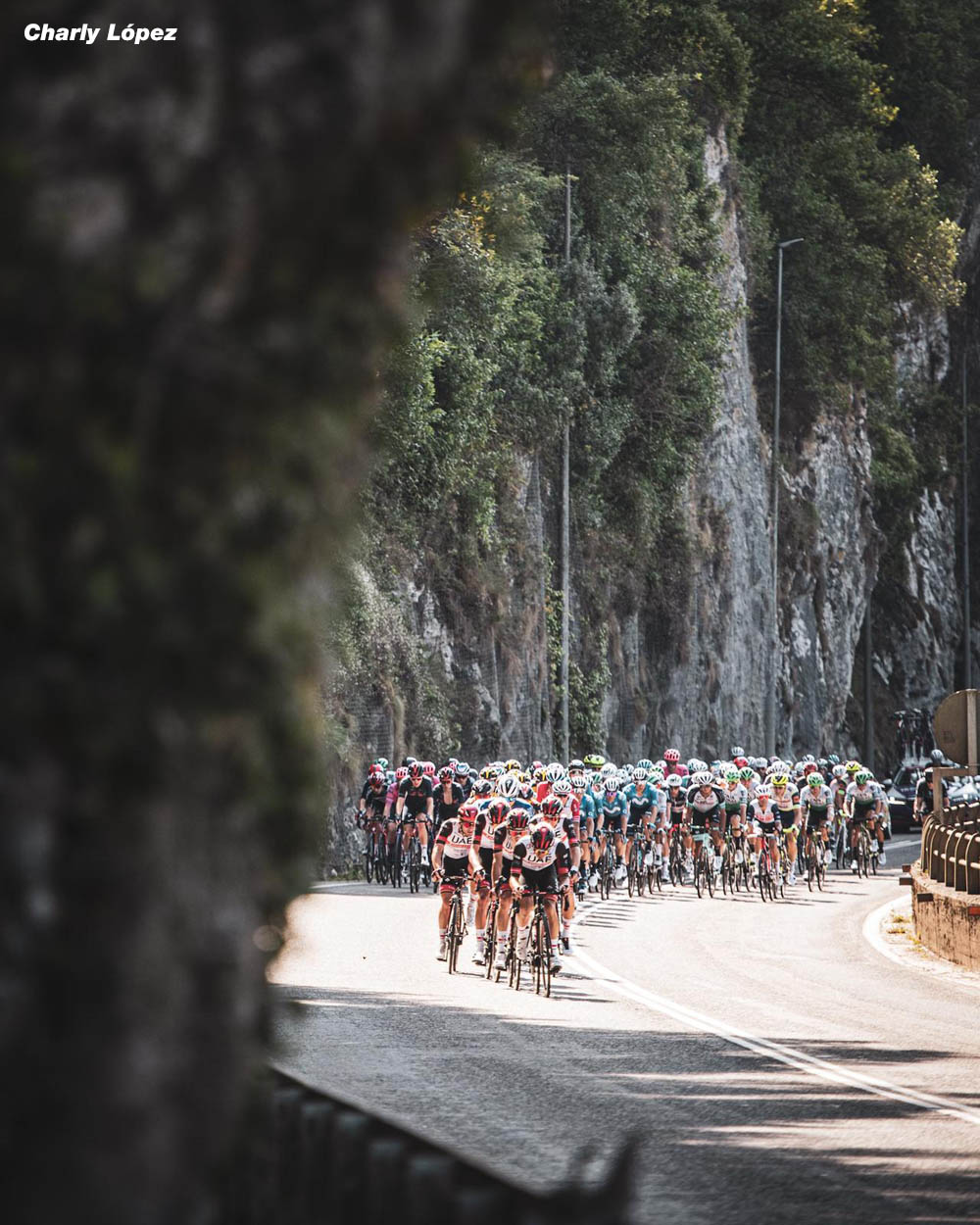 UAE Team Emirates rode hard and split the peloton, but nothing came of it

Dewulf held out the longest of all the early escapees. With a 20 seconds lead, the Belgian started the last 8 kilometres, but the chasing peloton caught him with 4 kilometres remaining. Then it was up to the trains of the fast men in the twisty finish towards Santa Cruz de Bezana. BORA-hansgrohe and Groupama-FDJ were in charge eat this point. 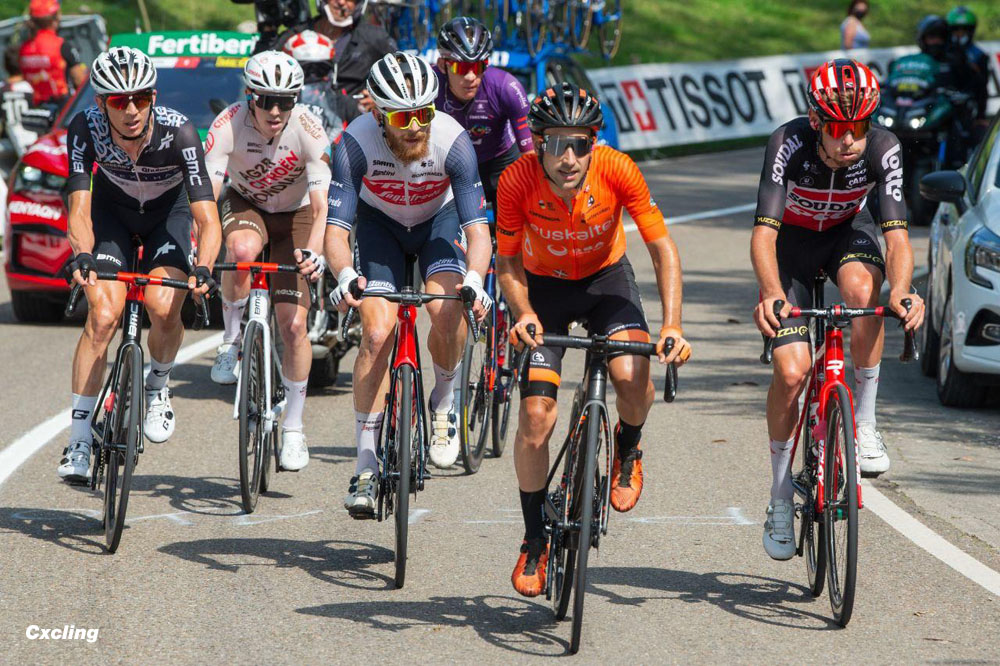 It was only a matter of time for the break 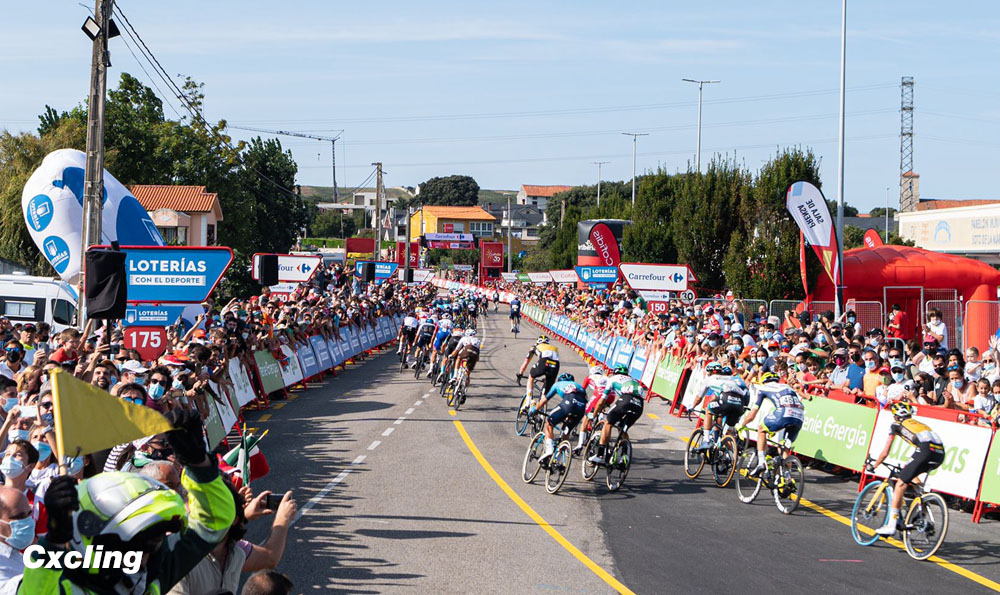 It was a tricky run-in to the finish line

Two kilometres from the finish, the Deceuninck – Quick-Step train came to the fore. In the technical final section, Jakobsen was kept well forward, after which he turned into the last straight line on Jordi Meeus’ wheel. With a strong finish, the birthday-boy Jakobsen managed to out-sprint the Belgian by more than a bike length and claim his third stage victory. Meeus was second, ahead of Trentin and Matthews. 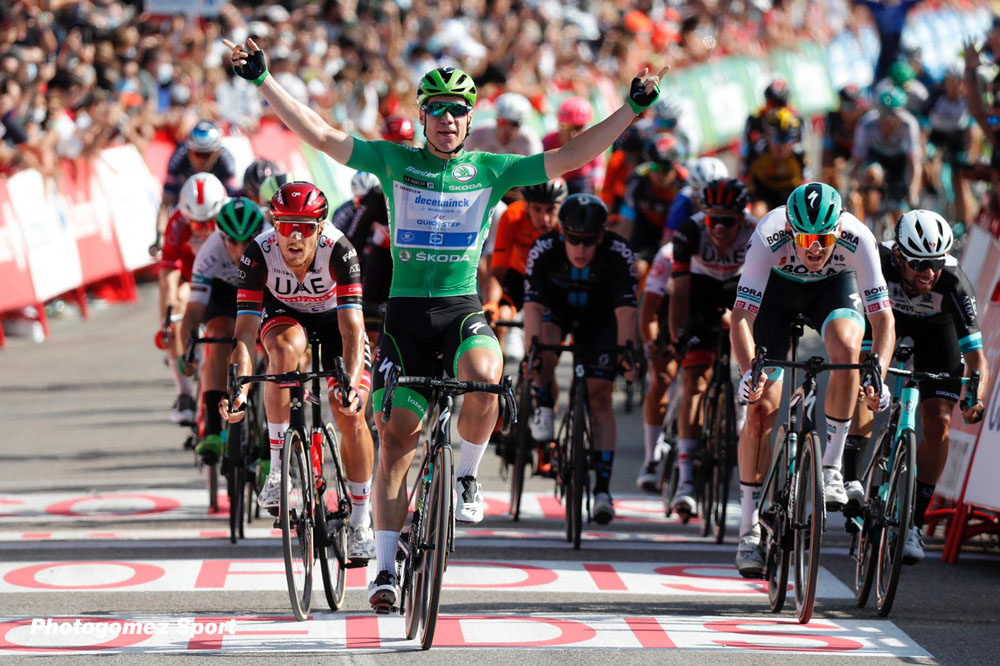 Stage winner and points competition leader, Fabio Jakobsen (Deceuninck – Quick-Step): “A birthday is always a good day, but I’m over the moon with this win. This is the Wolfpack. I was dropped on the climb. The guys waited for me, they brought me back and I win the race. It’s all thanks to them. The only thing I had to do was a short fast sprint, and they did everything else today. I’m never confident that I’m gonna win, but I always try because if you don’t try, you never win. I’m really happy and also I would like to take this moment, with my third victory, to thank three people that were really important in my recovery: professor Meijer from the Nijmegen hospital, Yvan Van Mol, my doctor in the team, and Cor van Wanrooij, my osteopath for my recovery. So I would like to thank those three, I love you all.” 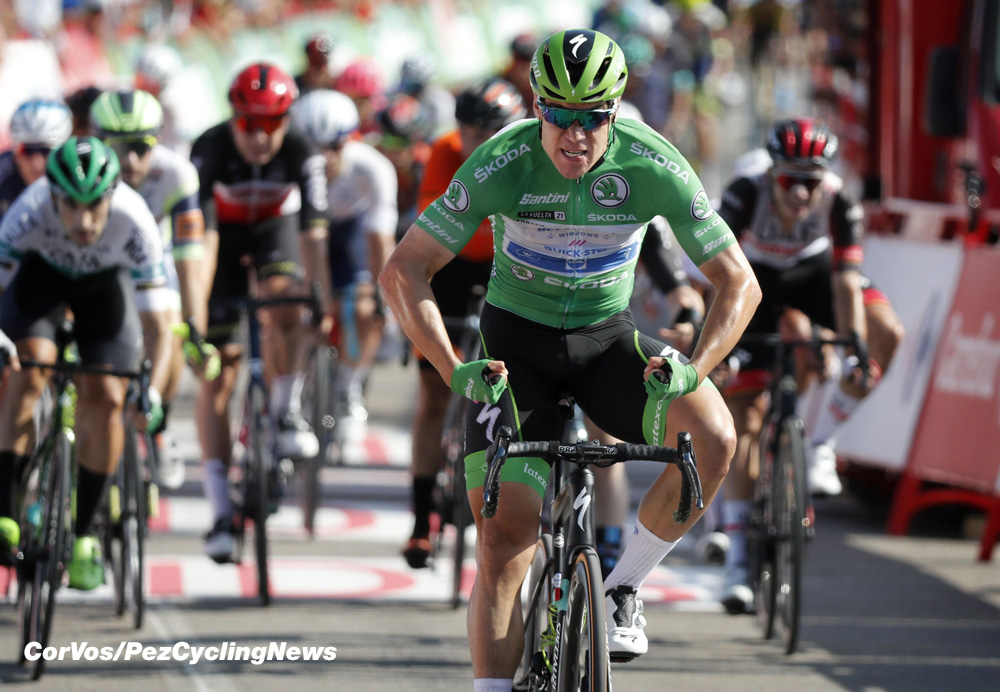 Overall leader, Odd Christian Eiking (Intermarché-Wanty-Gobert Matériaux): “Tactically speaking, it was maybe my easiest day in the red jersey but in another way it was hard to restart after the rest day. I felt okay but sleepy all day. In the end, it wasn’t difficult to defend the red jersey today. Tomorrow the Lagos de Covadonga will be very decisive for the GC. It will be a really hard racing from the start. It will be a lot of fun to race up there.” 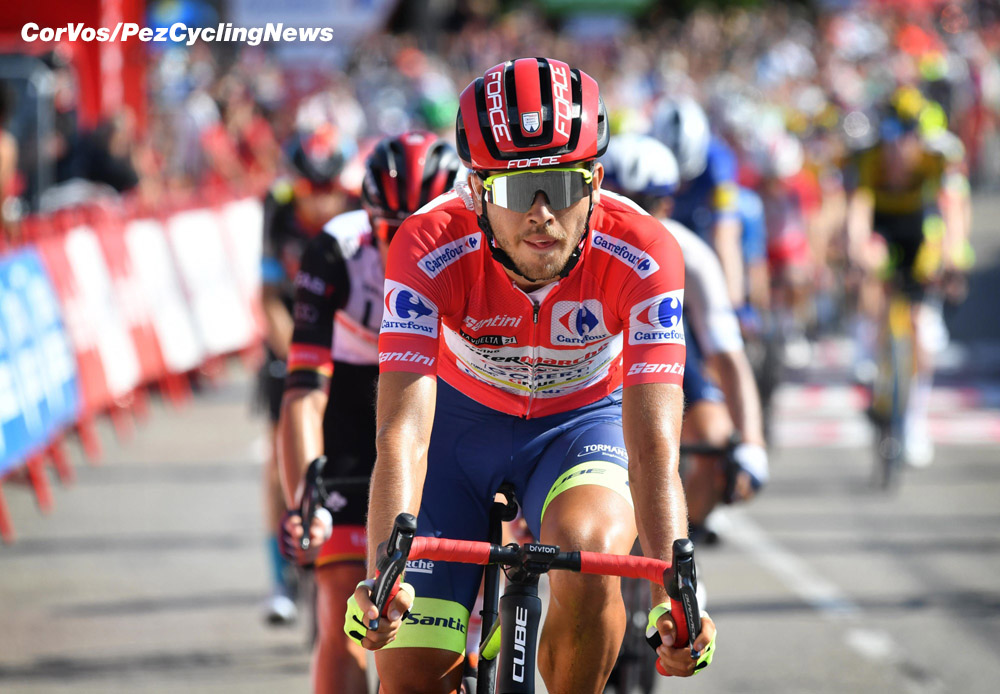