Vuelta Stage Report: The blue Movistar jersey of Miguel Ángel López was difficult to recognise as he came through the fog and over the finish line at the summit of the murderous climb of the Altu de El Gamoniteiru. The Colombian had attack the GC group and held off the overall leader, Primoz Roglič (Jumbo-Visma) by 14 seconds for the stage win.

Miguel Ángel López won the mountain stage 18 to the Altu d’El Gamoniteiru. The Movistar climber jumped away from the GC group with 3 kilometres to go, passed David De la Cruz and headed for the finish line. Primoz Roglič held the over all lead on López’s teammate Enric Mas. 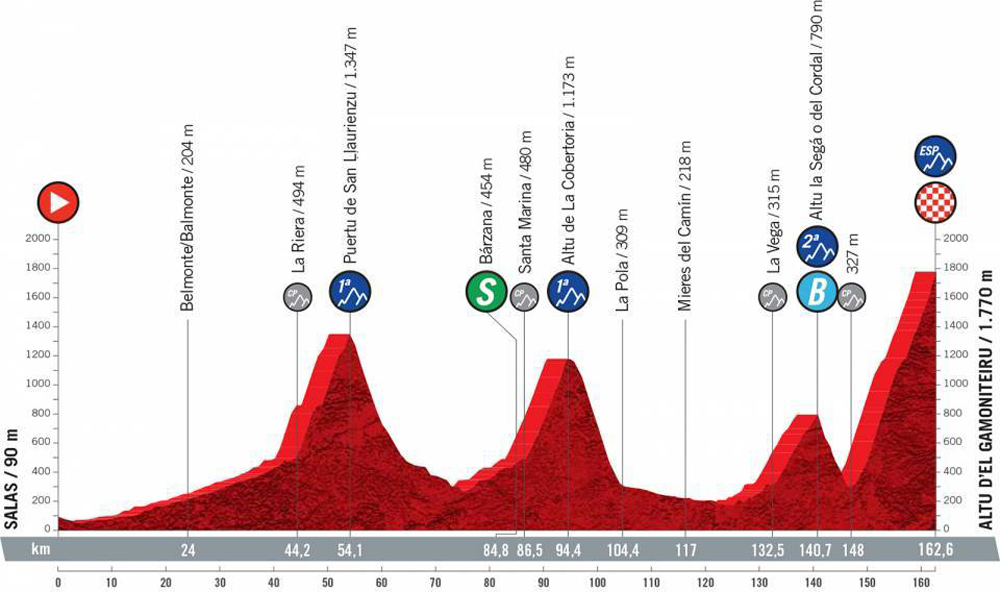 Technical director, Fernando Escartín: “A stage consisting in a little over 150 km, with an elevation gain rarely seen before in La Vuelta. Special category climb and La Vuelta 21 Alberto Fernández peak: 15 km at the unprecedented Altu d’El Gamoniteiru, with a constant climb featuring an inclination of 10-12%, will offer one of the race’s greatest spectacles. Before that, the Puertu de San Ḷḷaurienzu (1st cat), the Altu de La Cobertoria (1st cat) and the Alto la Segá or del Cordal (2nd cat), will impair the riders’ strength as well as their legs.” 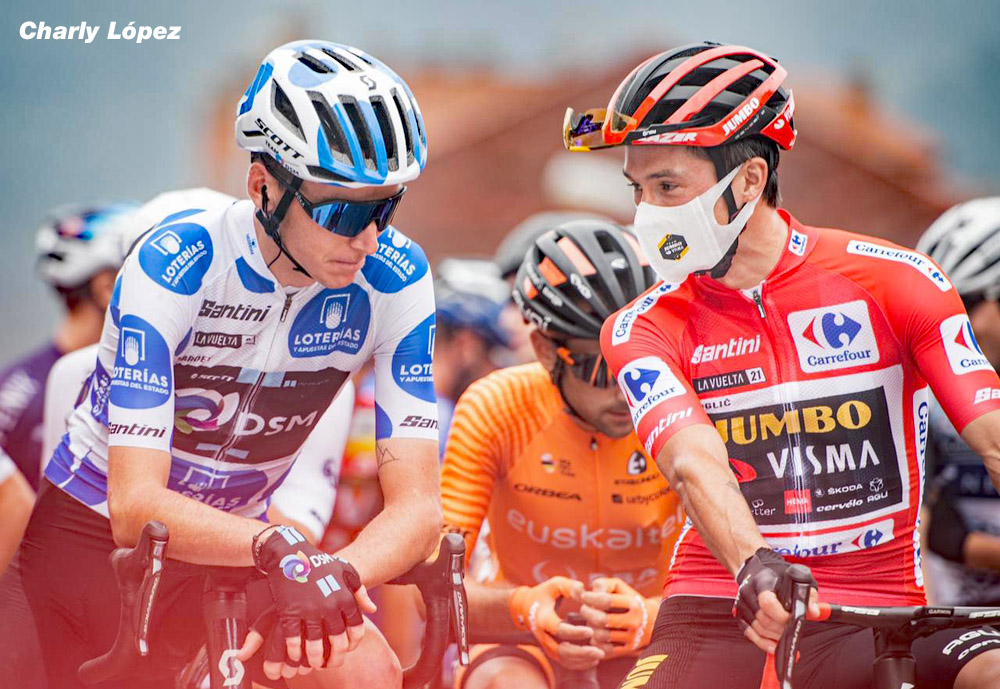 Another tough day ahead

With two first category climbs, one second and a finish on the Altu d’El Gamoniteiru, stage 18 was going to hurt. The race organisers had found a new monster climb with the steep Gamoniteiru in the Sierra del Aramo in Asturias. We know the Angliru is a hard climb, but the new climb is meant to be even harder. The two climbs are a stone’s throw from each other. 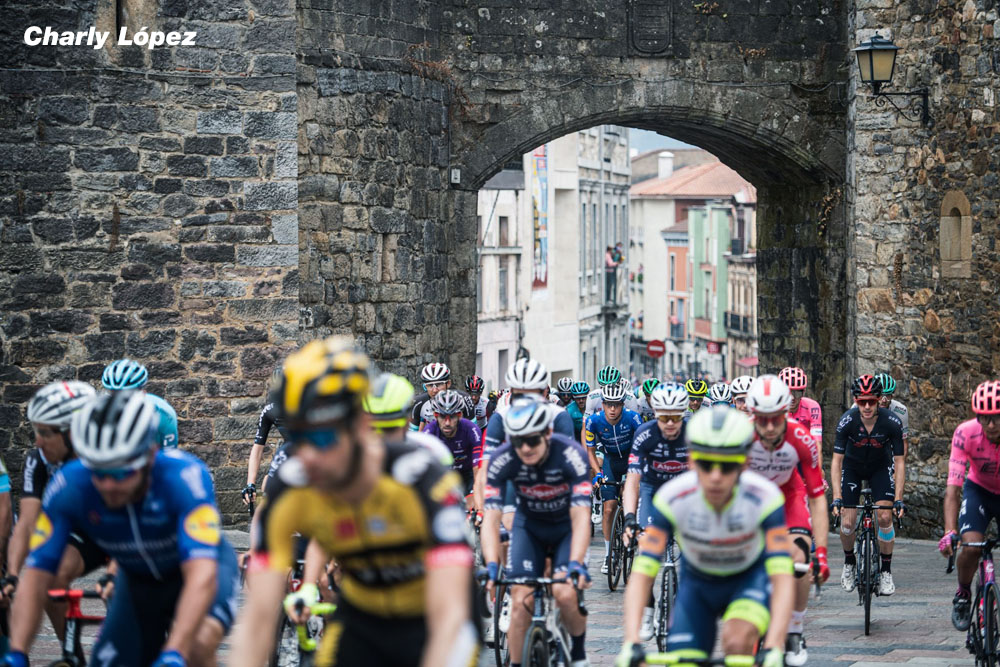 The start from Salas

With Primož Roglič back in the red, the stage could be another battle or a day for the break. Dylan van Baarle and Carlos Verona didn’t start. James Piccoli (Israel Start-Up Nation) put in the first attack and the Canadian had Pelayo Sánchez (Burgos-BH), Harm Vanhoucke (Lotto Soudal) and Bert-Jan Lindeman (Qhubeka-NextHash) join him. This was the start of a large escape with 32 men. The only team that didn’t have anyone in the group was Bahrain Victorious. 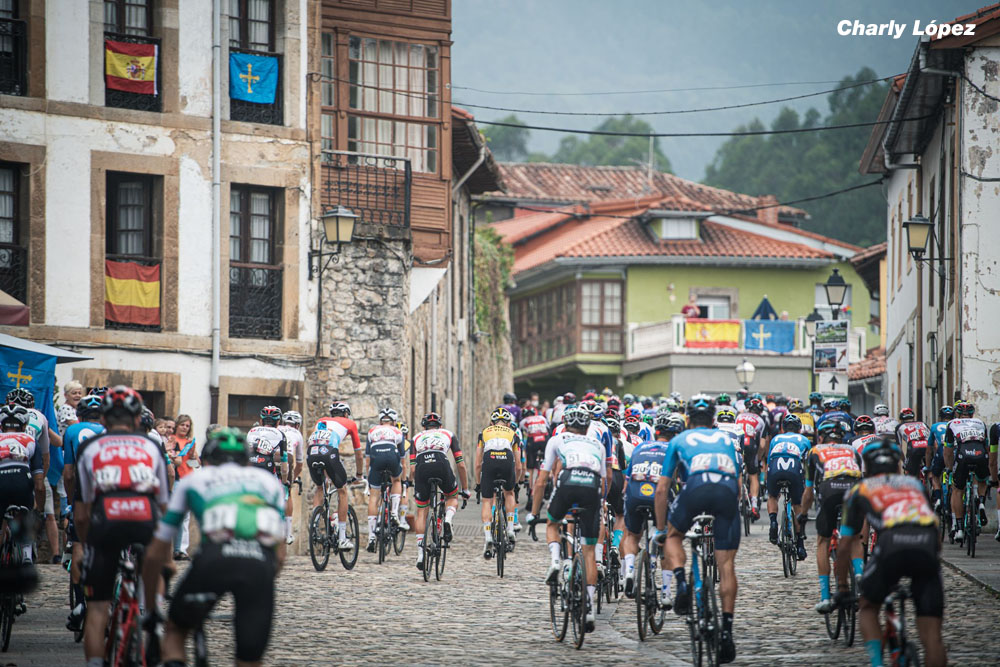 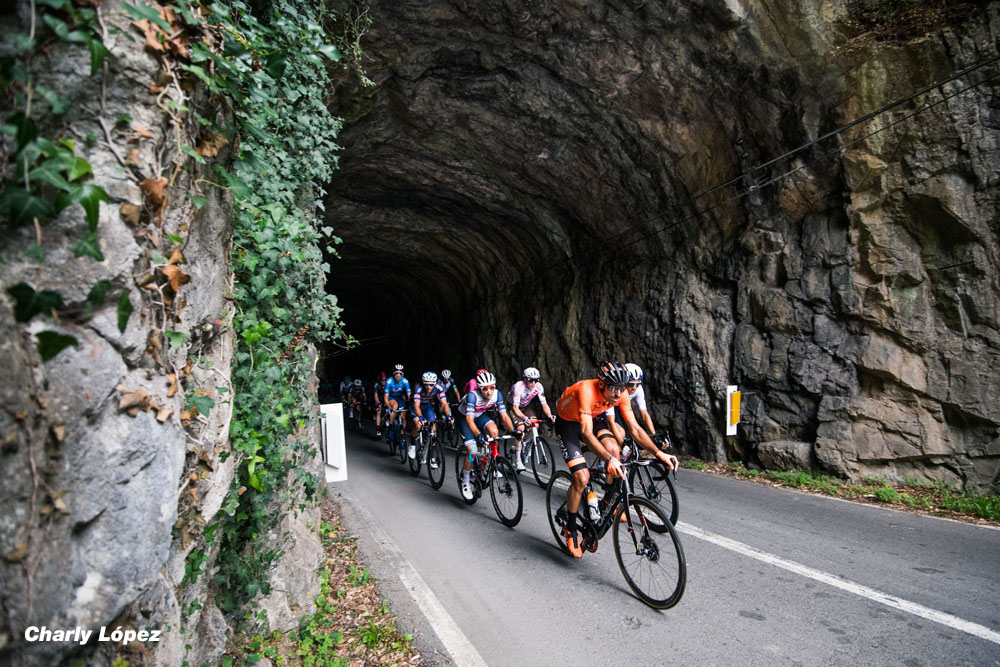 Tunnel through the mountains 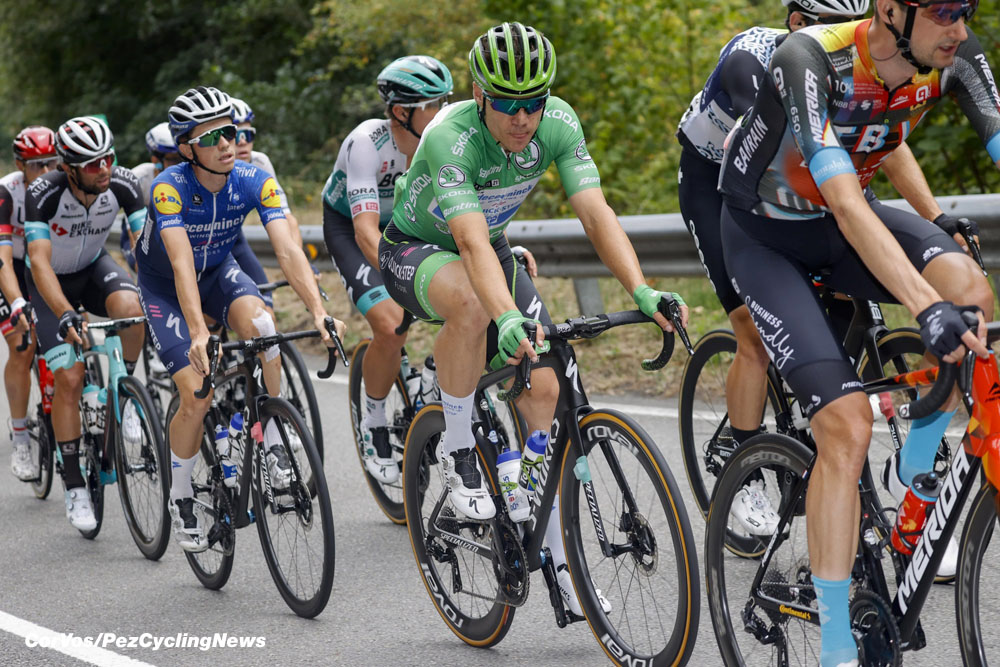 Storer had a nice gap on his pursuers at the top of La Cobertoria. With 10 more mountain points, the Australian, who won stages on both Balcón de Alicante and Rincón de la Victoria, became the virtual leader in the KOM classification. In the next valley, he extended his lead over the pursuers to more than 2 minutes. Movistar now got involved in the chase, and at the foot of the Altu La Segá o del Cordal the large group had the chasers on their heels. 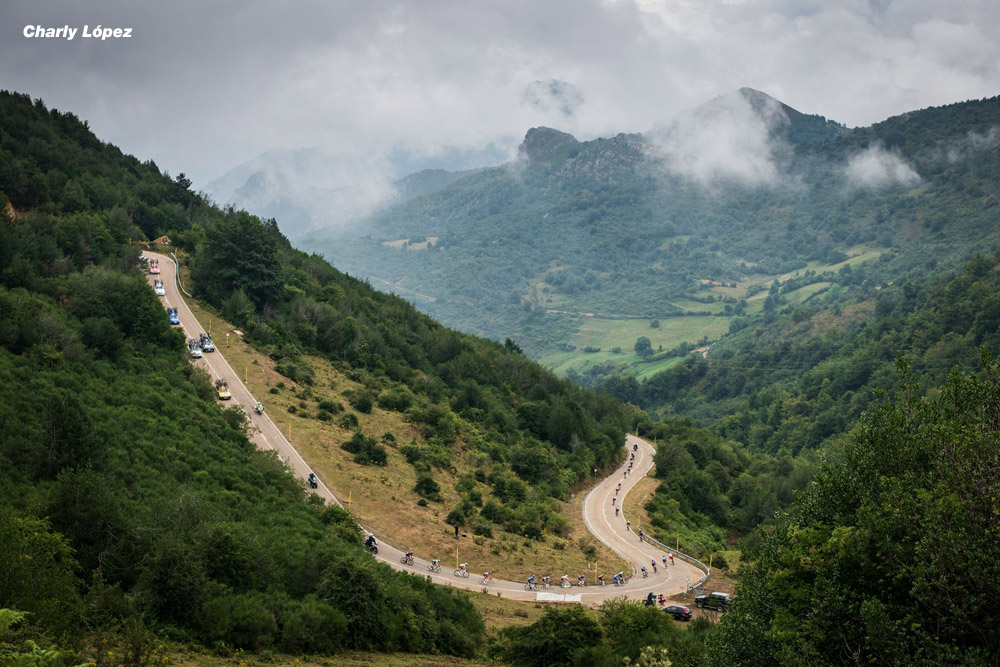 Aru tried to escape, just like Arensman and Brambilla. Then UAE Team Emirates started to accelerate and almost all the escapees were caught, only Storer rode 2 minutes ahead. At the top of the third climb, the Australian again took the most mountain points. Behind; Mikel Bizkarra counter-attacked and Romain Bardet, Storer’s teammate and wearer of the KOM jersey, jumped with the Euskaltel rider. Bardet dropped Bizkarra on the descent. 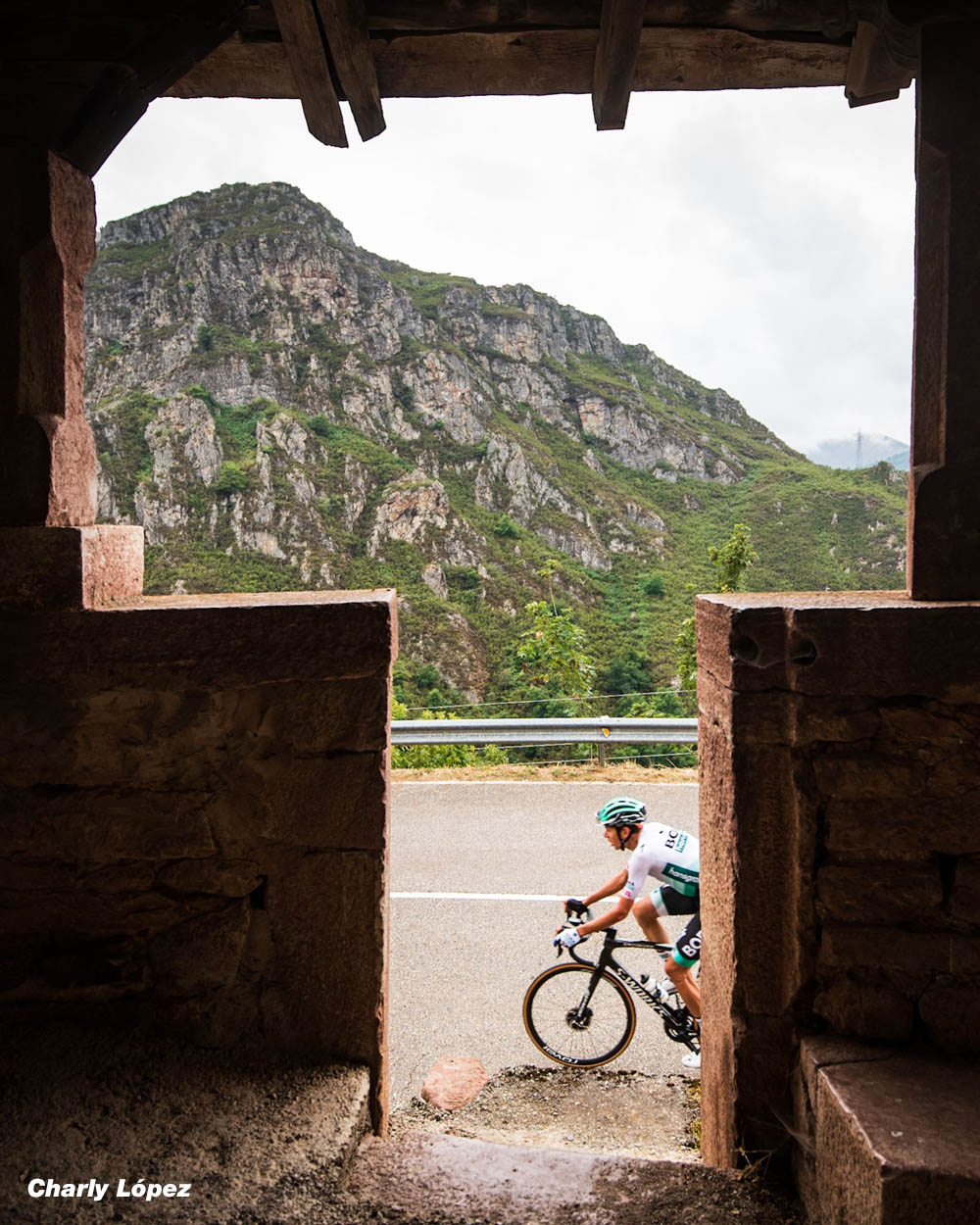 Another wet day in the north of Spain 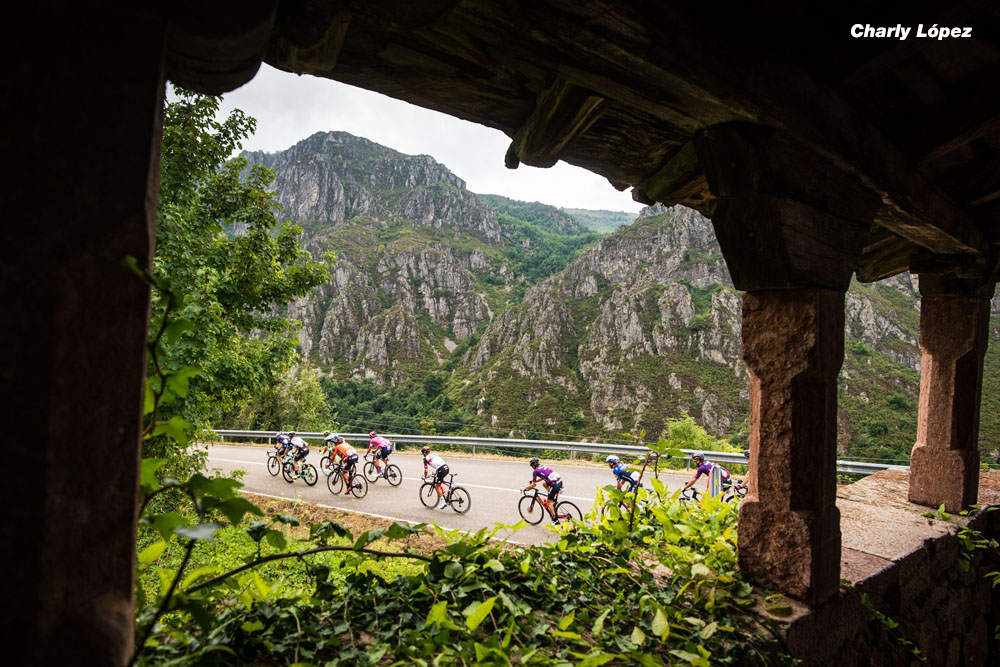 Storer still had 2:30 at the foot of the Altu d’El Gamoniteiro, the Trophy Alberto Fernández for the toughest climb of the Vuelta. Bardet was still 30 seconds ahead of the peloton, but in the following kilometres the French climber dropped back to the peloton. The men of Bahrain Victorious and Movistar were still on the front. With José Joaquín Rojas in the lead, but the chase group didn’t get any closer to the solo leader. 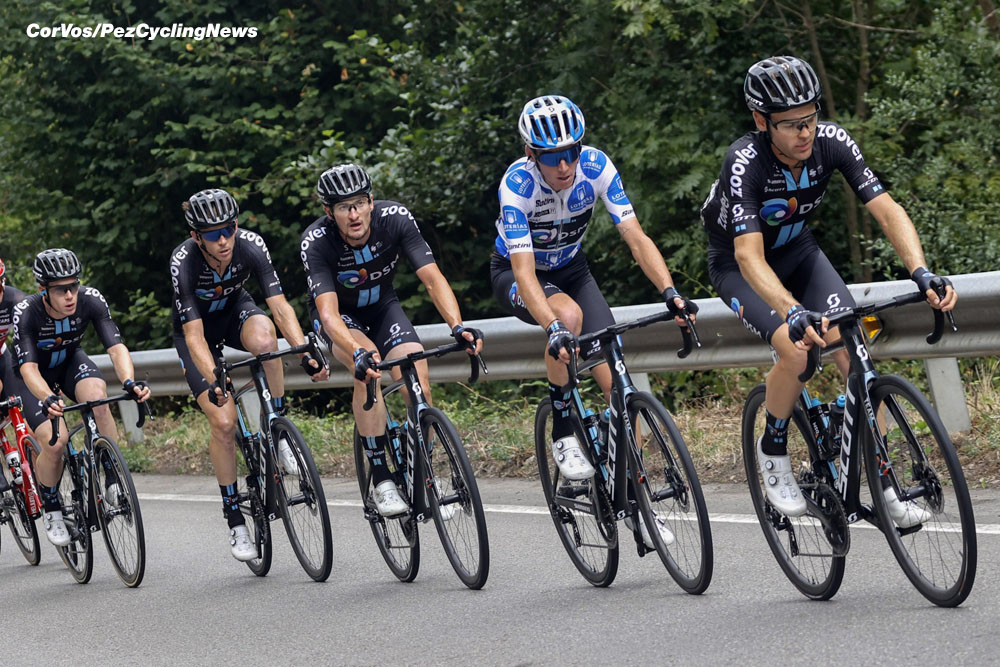 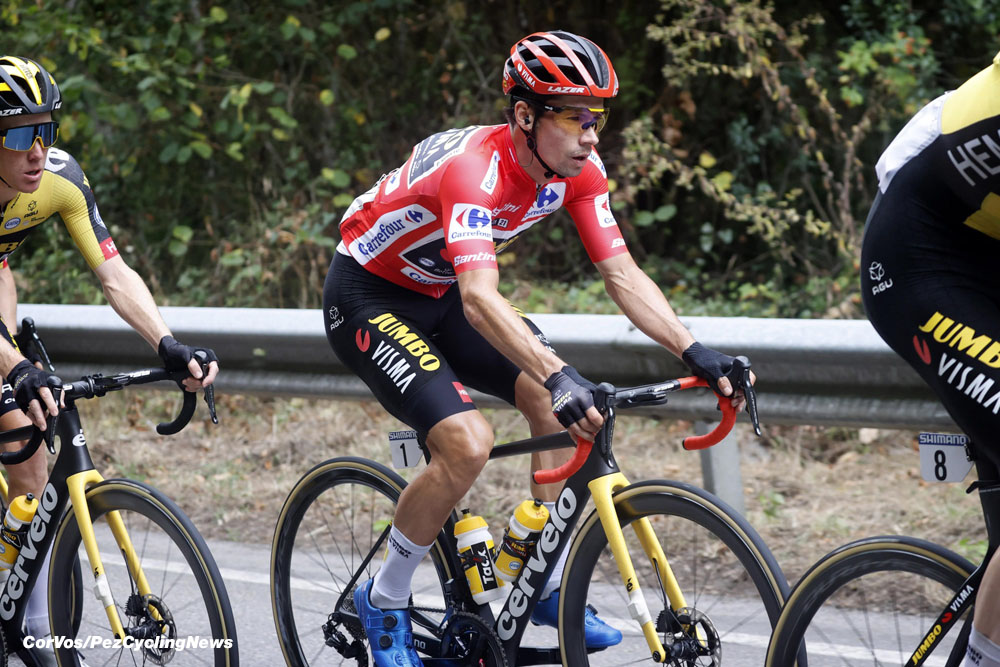 Roglič only had a few rider to watch

Twelve kilometres from the finish Rojas could do no more and Geoffrey Bouchard attacked. After 2 kilometres in pursuit alone, the Frenchman was joined by David De la Cruz. They rode together for a while, but then the Spaniard rode away. De la Cruz was riding well and was pulling Storer in. The Spanish climber of UAE Team Emirates caught the Australian with 7 kilometres to go. 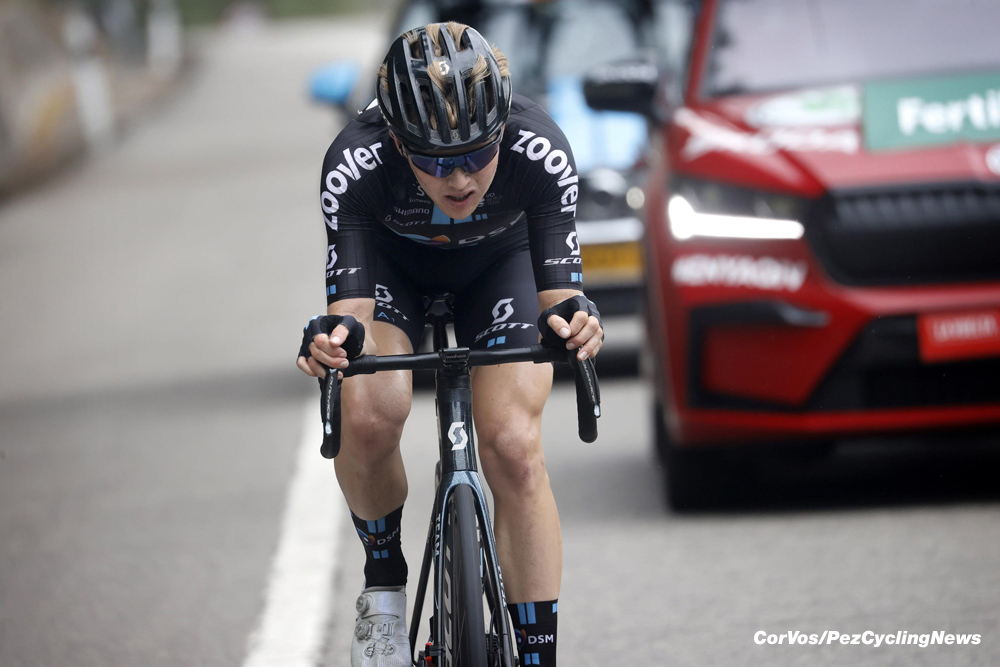 Brave solo from Storer, will Bardet be pleased? 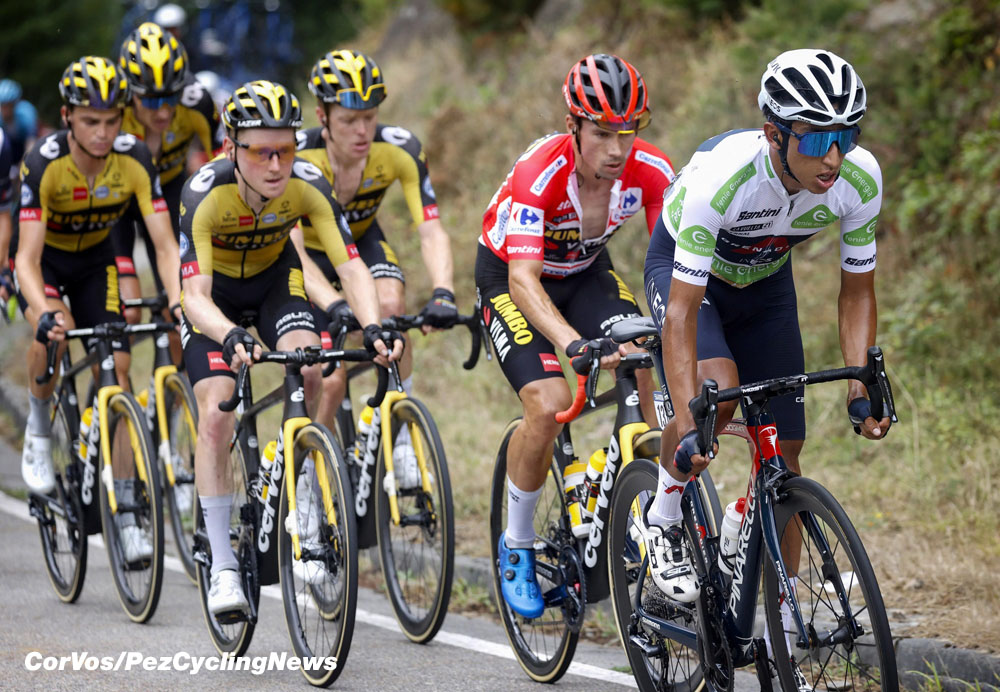 Would there be fireworks again between Bernal and Roglič on the Altu de El Gamoniteiru?

Storer and De la Cruz had 40 seconds on the peloton, which had now thinned to a group of the GC favourites. Jan Hirt had put himself in the lead for his leader Louis Meintjes. De la Cruz dropped Storer 5 kilometres from the top and the Australian was passed by the first group. Egan Bernal started attacking 4 kilometres out and Roglič jumped with the Colombian. 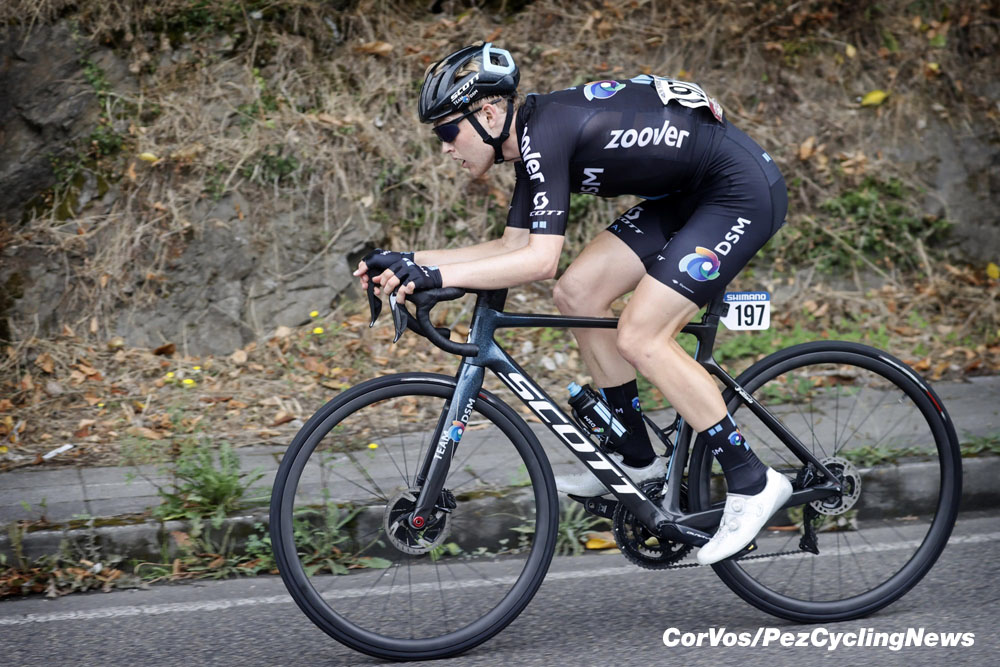 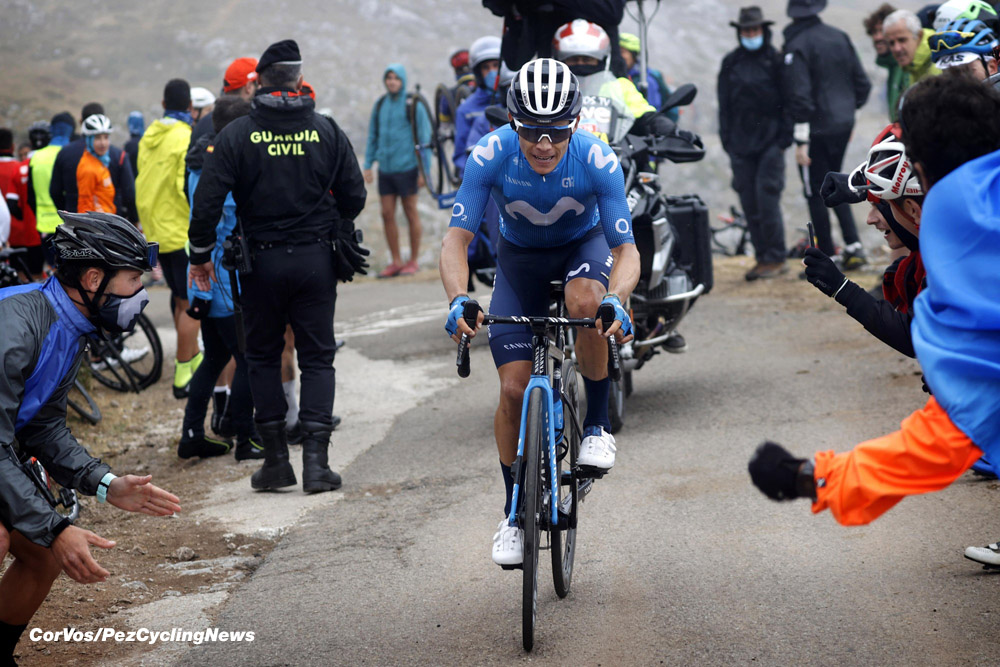 López attacked the other GC men with 3K to go

Miguel Ángel López was the next attacker from the GC riders with 3 kilometres to race in the thick fog. Sepp Kuss set the pace for Roglič. With 2 kilometres to go, López passed De la Cruz. Roglič waited until the last 2 kilometres for his move. Only Enric Mas and Egan Bernal could follow, Meintjes and the Bahrain Victorious couple Jack Haig and Gino Mäder tried to hang on. 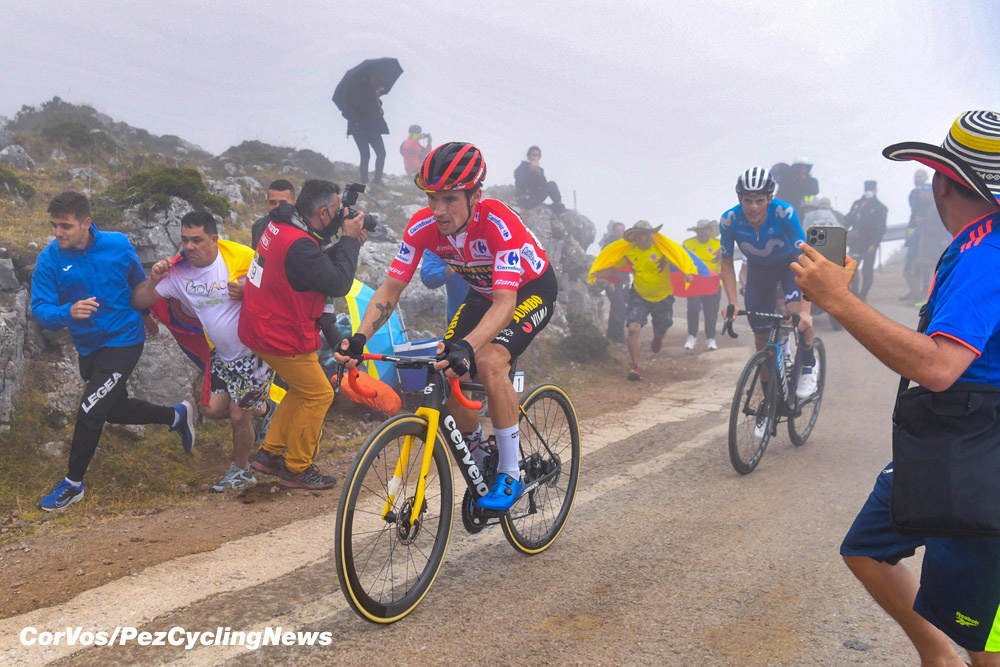 Roglič chased after some attacks form Bernal, Mas could only follow 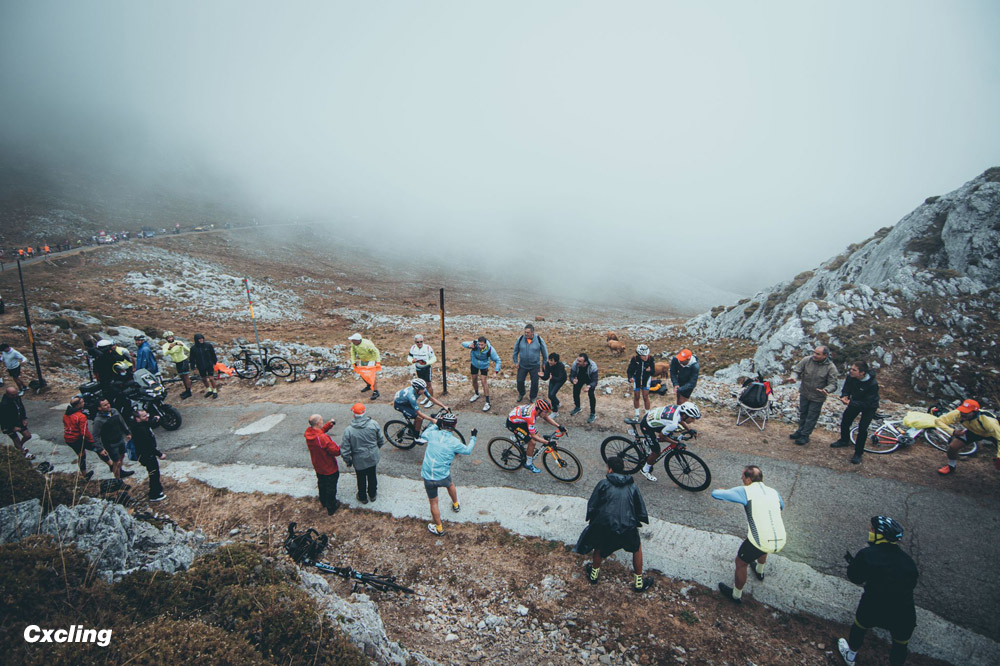 Then it was Bernal who tried, and Roglič and Mas jumped on him. Bernal accelerated again, but Roglič and Mas didn’t crack. In the last metres to the finish, Roglič jumped Mas and Bernal, and the Slovenian leader took second place. Mas was third, Bernal fourth. 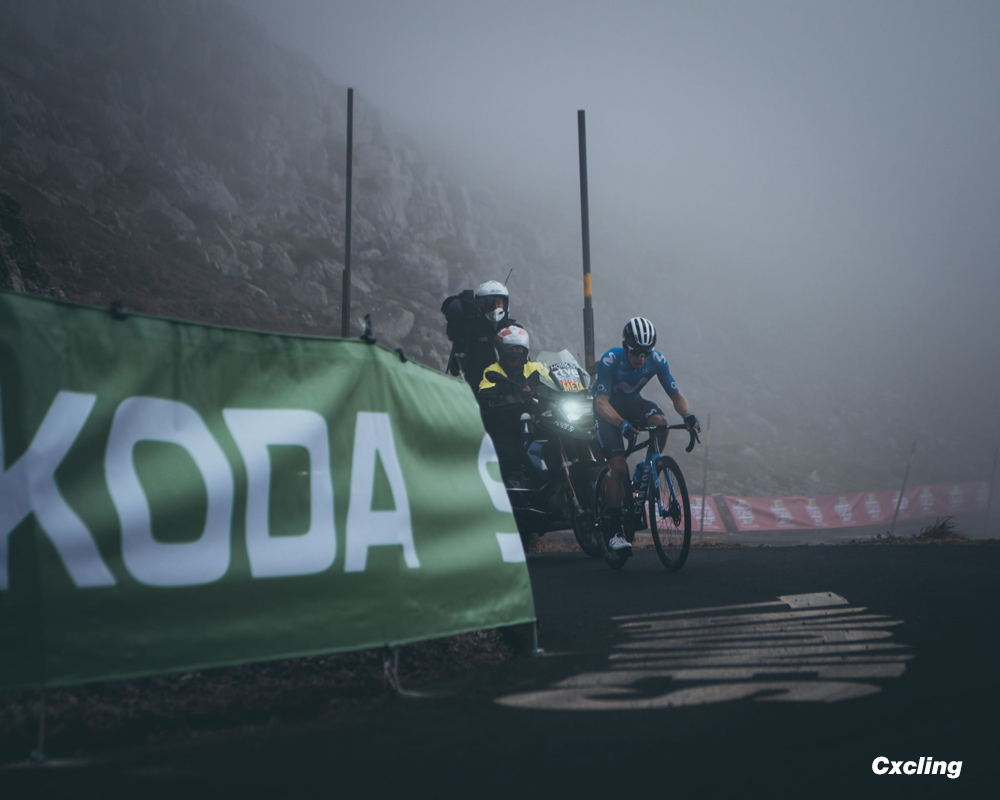 Stage win and a few seconds for López 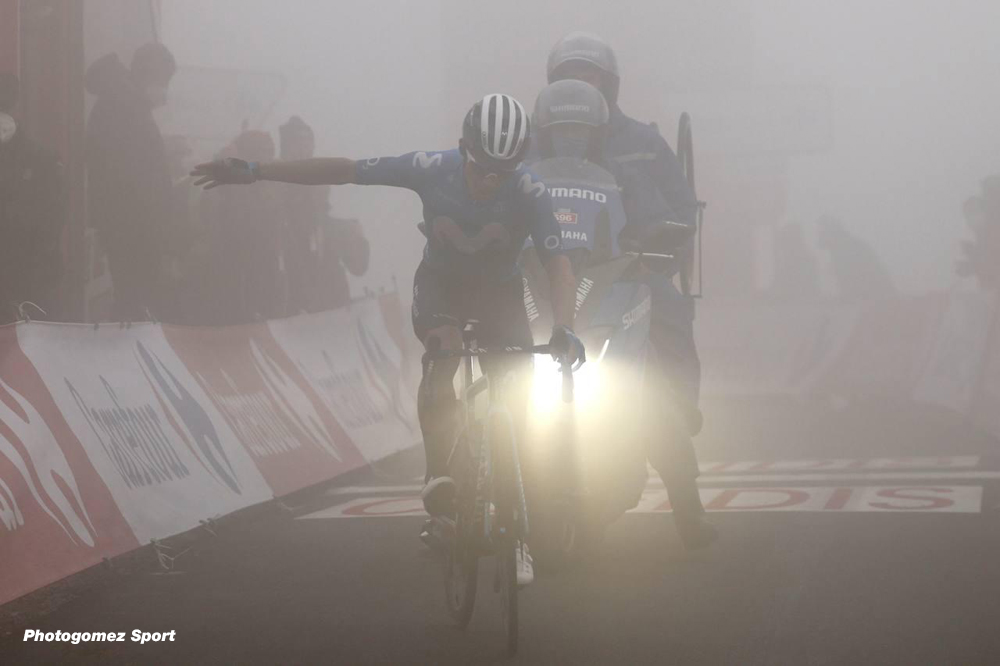 Yes, that’s the win for López

Stage winner and third overall, Miguel Ángel López (Movistar): “I wanted to win again in La Vuelta for a long time and I have achieved it thanks to the magnificent work of my teammates, despite the fact that there are only five of us after the loss of Carlos [Verona], Alejandro [Valverde] and [Johan] Jacobs. Thanks to Imanol [Erviti], Nelson [Oliveira], Rojilla [Jose Joaquin Rojas] and Enric [Mas], who have done a great job. We knew it was nice to prevail at a stage like today. It had been four years since I won at La Vuelta and it’s even better in the queen stage, I do it with love and desire for my son as well. I think this victory means a lot for Movistar because of the great work of all the team, only those of us who are there know the suffering day by day, it is not only talking and criticising. Today we gave a nice show and we go away with this nice victory. We are now calm, we knew it was an important day and we had to take advantage of it.” 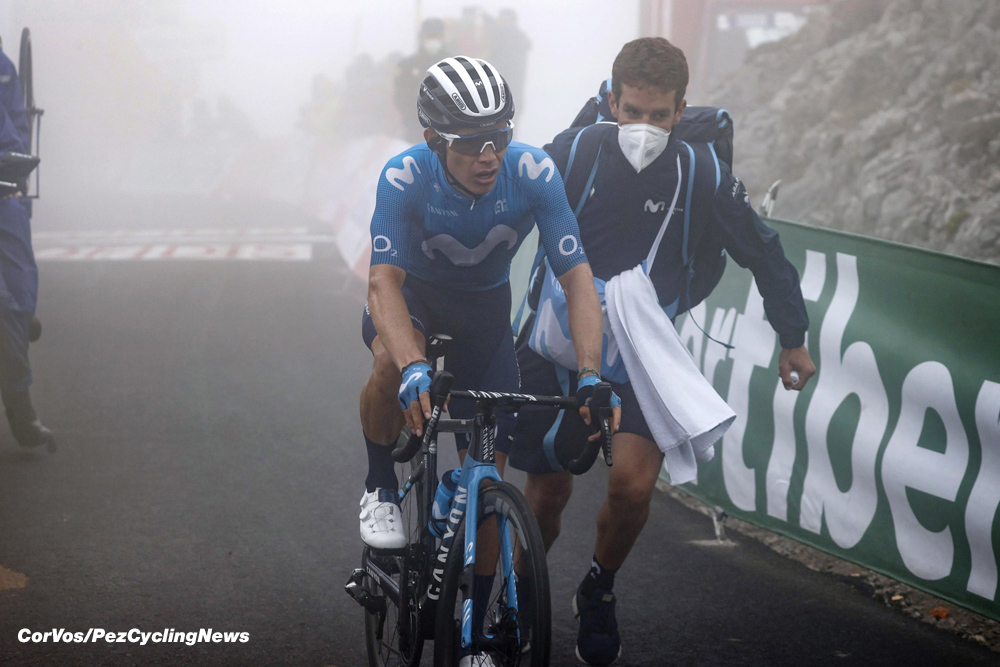 Overall leader and second on the stage, Primoz Roglic (Jumbo-Visma): “It felt like a queen stage, it was really hard, especially after yesterday’s effort, it was extremely hard for me and I’m happy that I had something left to climb this mountain. We were off duty [with Bahrain Victorious and Movistar Team pulling the peloton]. In my opinion, we could have gone easier! It was a hard pace and a hard day from start to finish. I’m happy we’re done with the big mountains. We’re all feeling the efforts from the last two days and the three weeks before. Still there are hard stages to come. Hopefully, we can do our best and finish it off.” 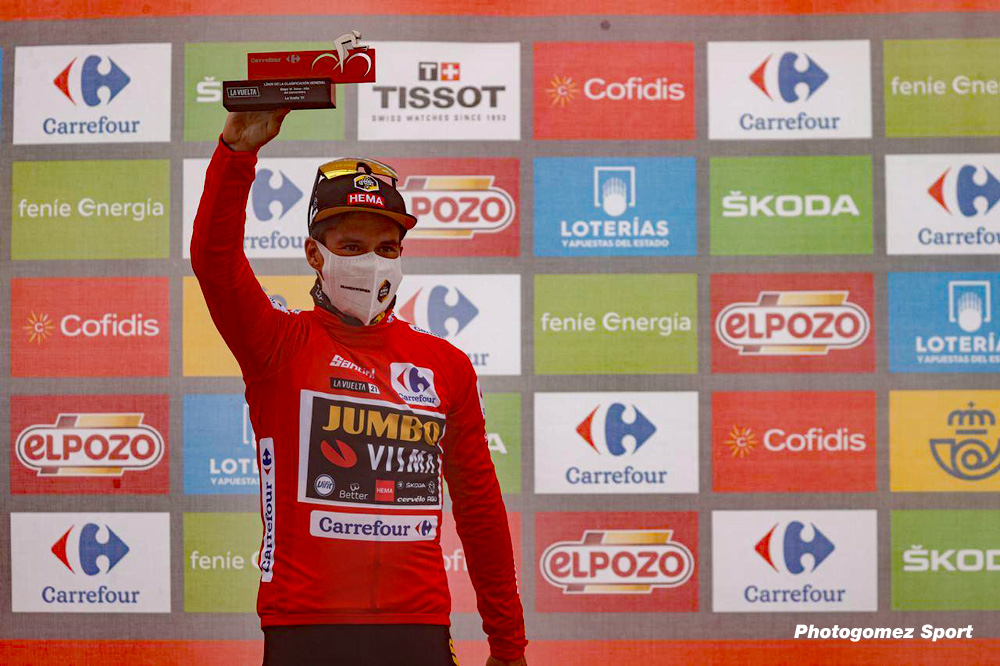 Roglič in red to the end now?