Vuelta Stage Report: As expected, stage 2 came down to a bunch sprint. The Deceuninck – Quick-Step hit the front to pilot Fabio Jakobsen to the line, but it was Alpecin-Fenix’s Jasper Philipsen who pushed his bike across the line just ahead of Jakobsen and Michael Matthews of BikeExchange. Primoz Roglič (Jumbo-Visma) held the overall lead.

Jasper Philipsen has added the second stage of the Vuelta a España to his palmarès. In Burgos, the Alpecin-Fenix rider from Antwerp defeated Fabio Jakobsen, Michael Matthews and Sebastián Molano in a close bunch sprint. Primož Roglič kept the red leader’s jersey.

Technical director, Fernando Escartín: “Second stage and first sprint finale in a particularly generous start to La Vuelta in terms of opportunities for sprinters. This linear stage will help determine which teams have a chance to control the race, in this and in future stages.” 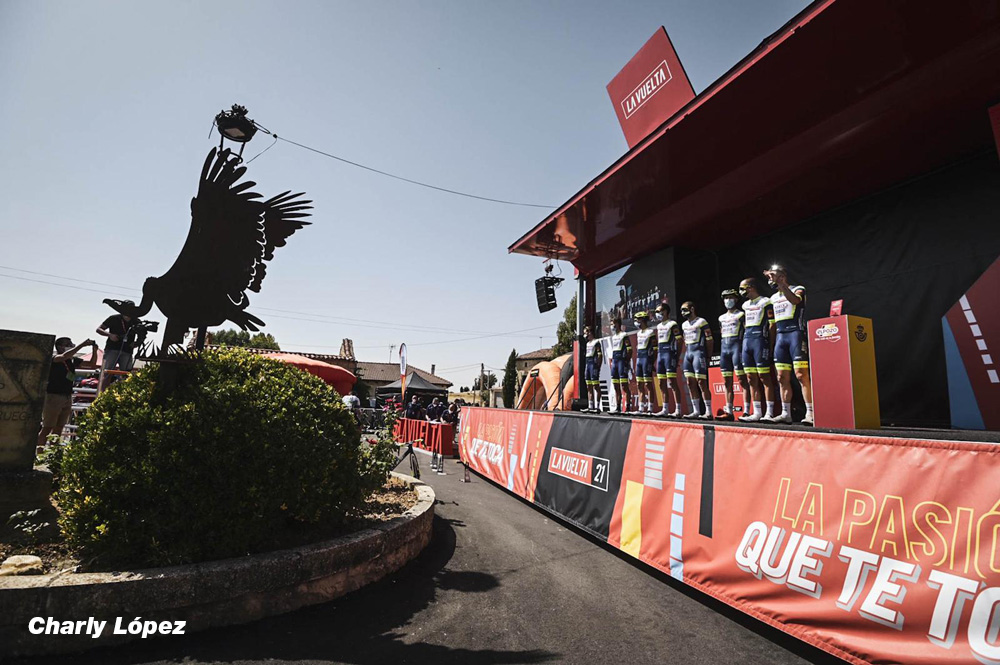 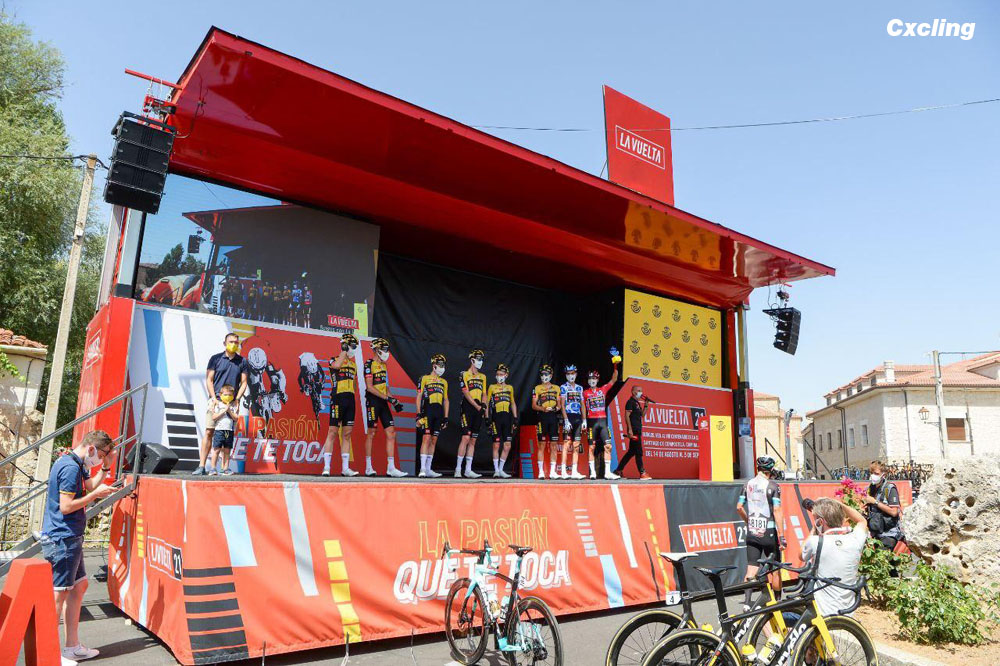 The first stage was 166.7 kilometres from Caleruega to Burgos. With the exception of a few small lumps, the course had no significant obstacles, so that the peloton headed for the first bunch sprint. The Spanish heat could, however, play a significant role with temperatures of up to 38ºC. With Primož Roglič in the red leader’s jersey the peloton rolled out of Burgos. 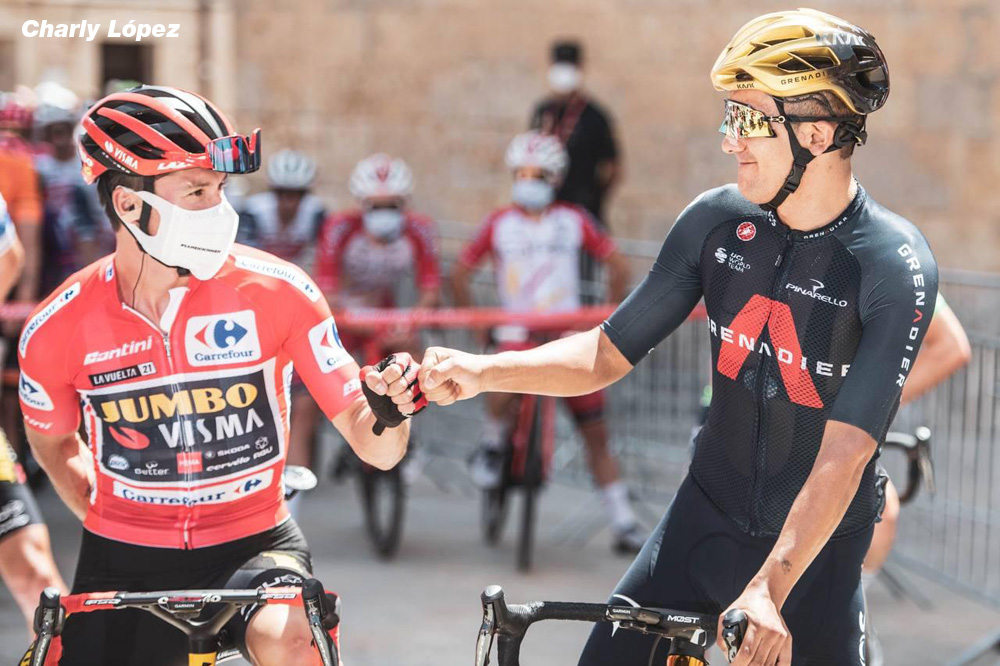 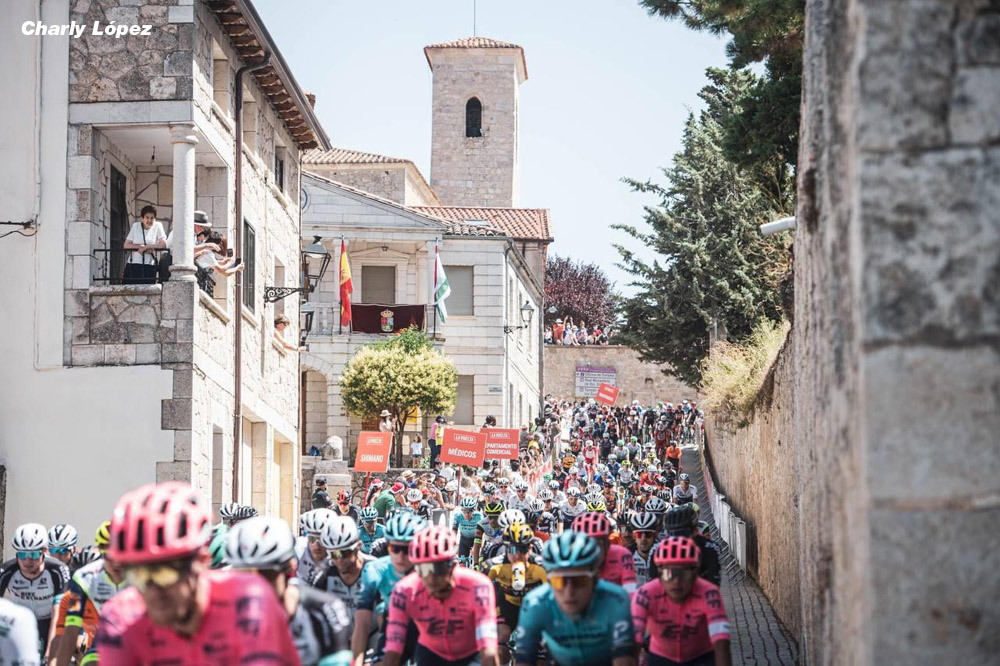 Another warm day in Spain

It did not take long before the escape of the day was formed. All three Spanish wildcard teams had a man up front: Burgos-BH had Diego Rubio, he was joined by Sergio Martín (Caja Rural-Seguros RGA) and Xabier Mikel Azparren (Euskaltel-Euskadi). The three rode away from the peloton for a maximum of just under 4 minutes. Groupama-FDJ was in control for Arnaud Démare, they kept the difference stable between 2 and 4 minutes. 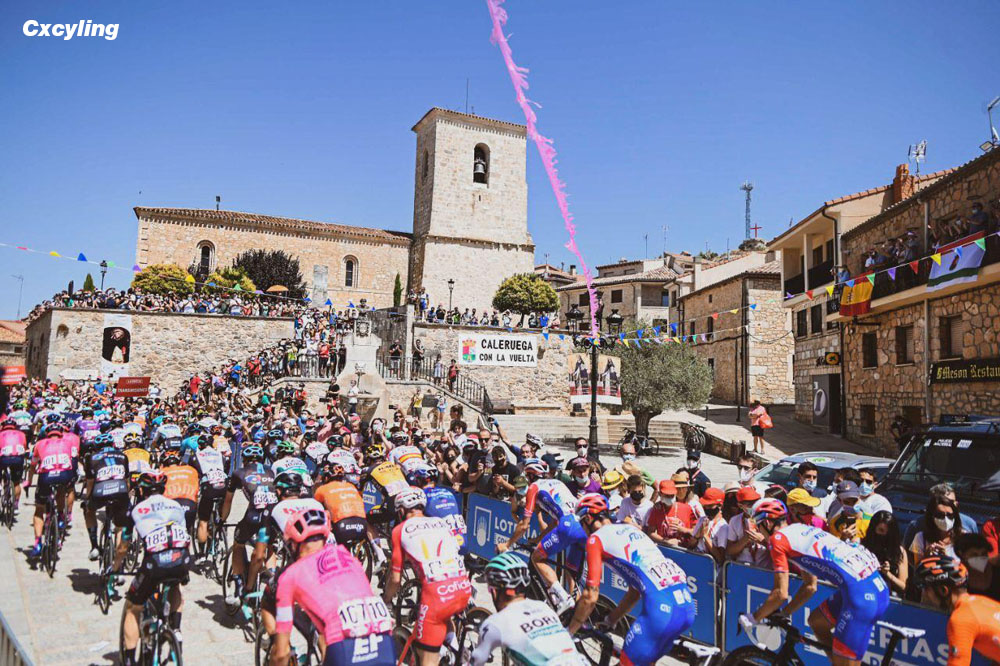 The villagers were happy to see la Vuelta 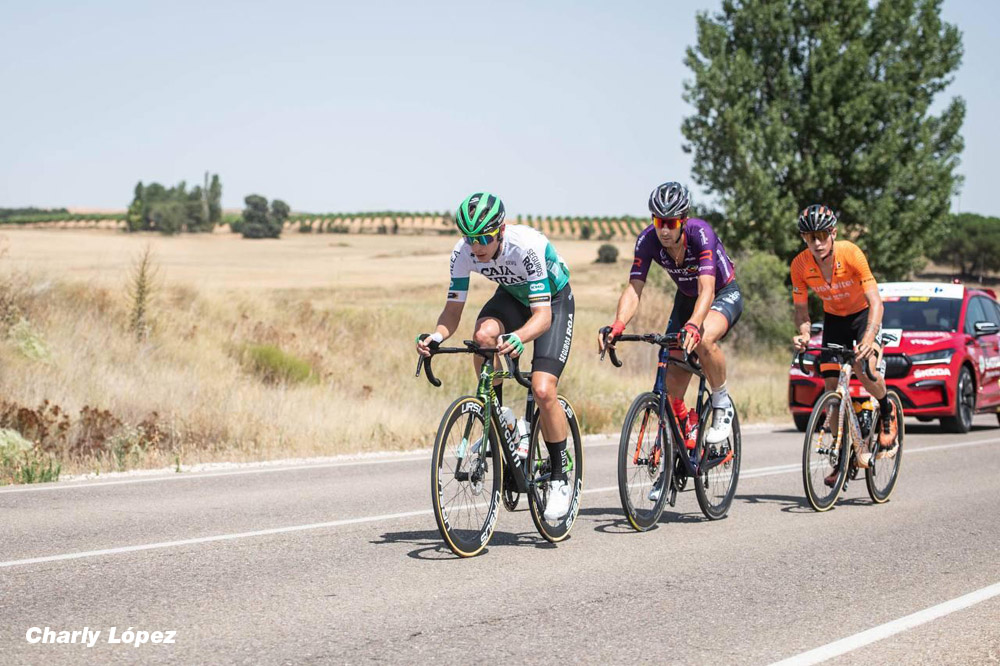 After 40 kilometres a large chunk was taken out of the lead by Groupama-FDJ and Deceuninck – Quick-Step. The peloton didn’t want to be surprised by any cross-wind, so the nervousness increased. As a result, the difference was still less than 2 minutes. Jay Vine crashed, but it wasn’t a problem. From then on there was no peace in the peloton and the difference to the leading group kept fluctuating around 2 minutes. 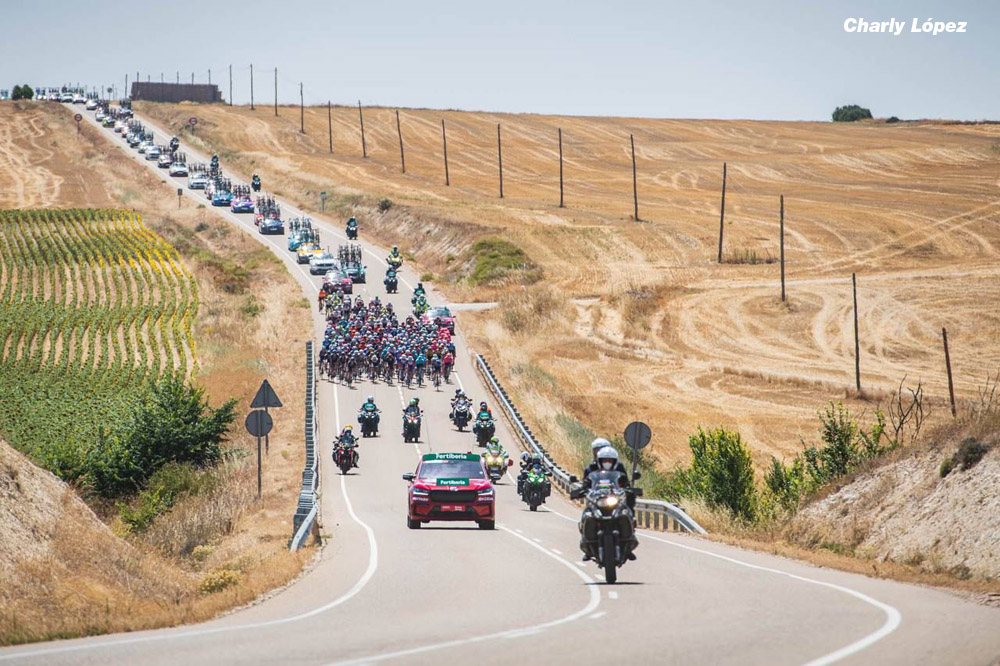 Dry and windy in these parts 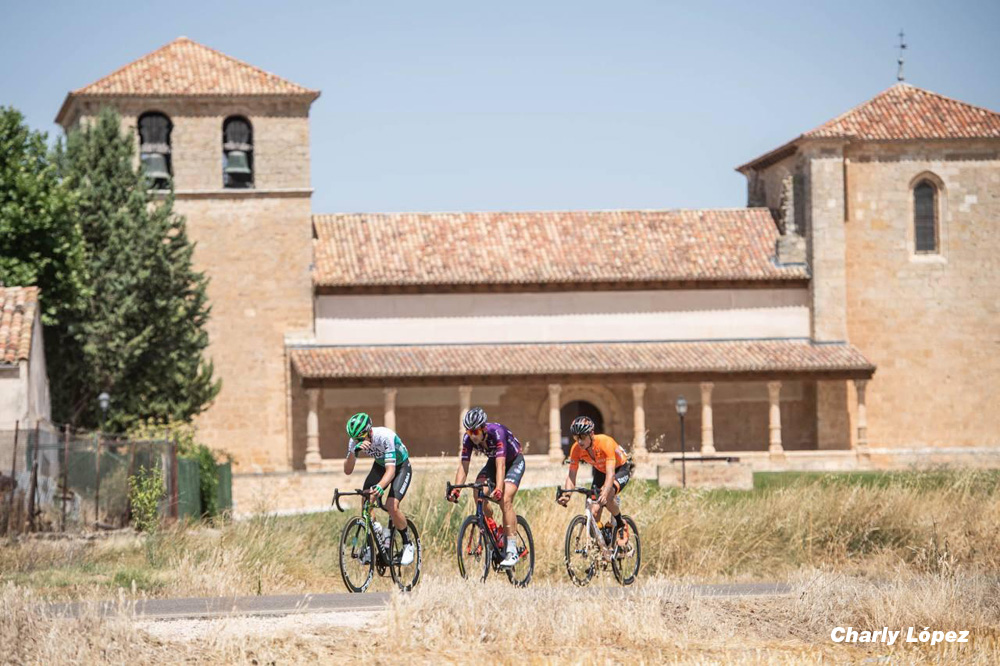 A hot day to be in the break

With 60 kilometres to go, the peloton had the escapees in their sight, but then the pace dropped and Rubio, Martín and Azparren were able to gain a little more lead. At 16.7 kilometres there was an intermediate sprint. The intermediate sprints in the Vuelta this year have undergone a major transformation. Previously, only three, two and a points were up for grabs in the intermediate sprints, but now there are more points to be earned in a new scoring system that is very similar to that of the Tour. The first three riders also receive three, two and a bonus seconds. 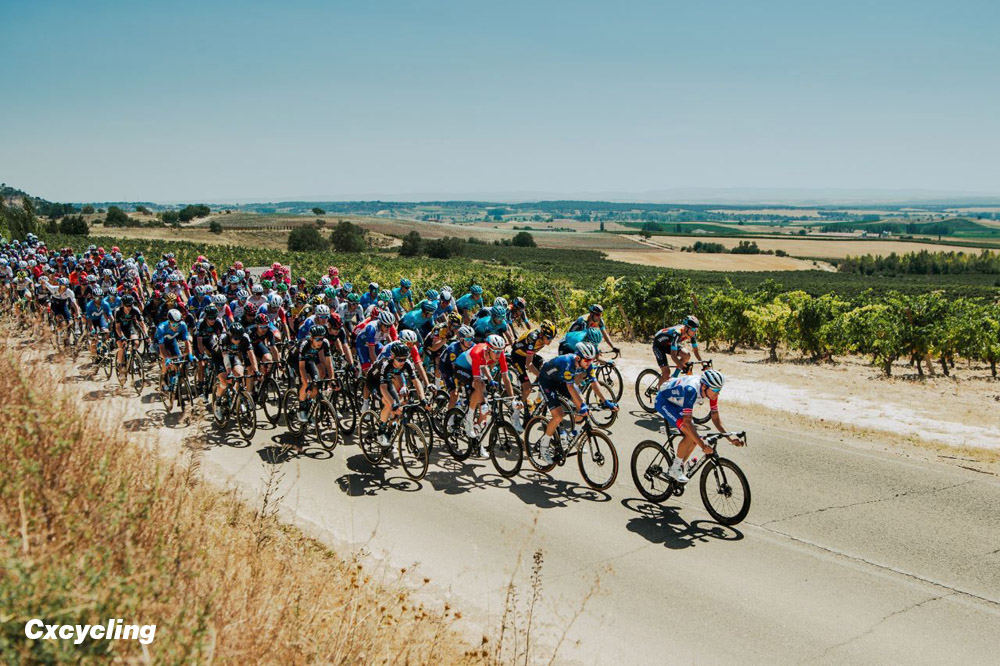 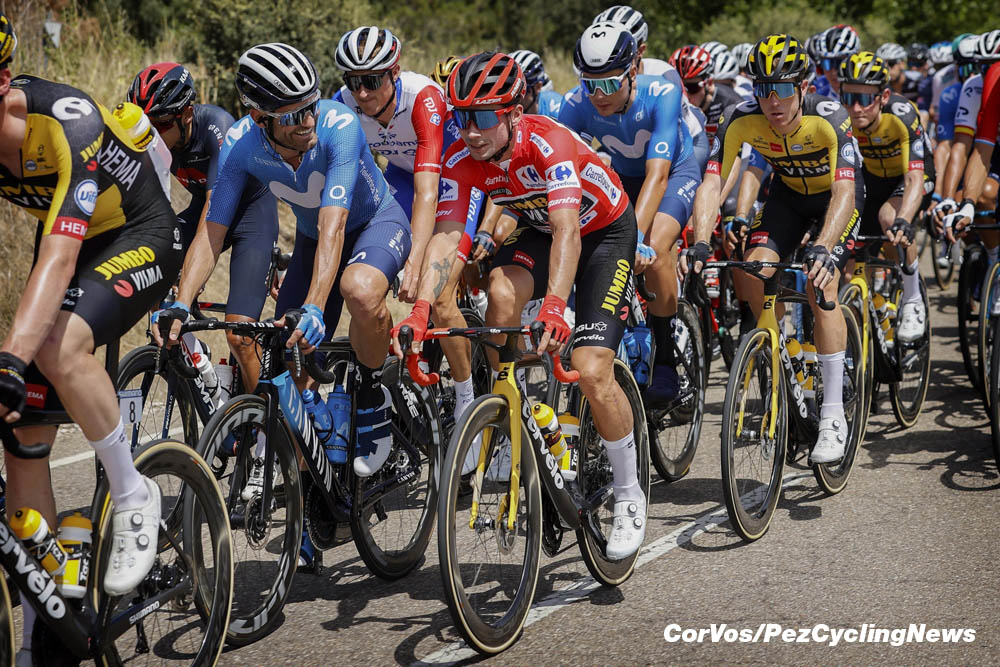 Primoz Roglič suits red, does Jumbo-Visma want to keep hold of the jersey?

With 31 kilometres to go, the three escapees were still 45 seconds ahead of the peloton, which was the signal for Rubio to try to break free. The Burgos-BH rider was successful as first Azparren and then Martín were dropped. Three kilometres from the intermediate sprint, Rubio’s lead also came to an end. The peloton then stormed towards the sprint. Fabio Jakobsen was interested in the points and took the full 20 points. Aranburu came through in second and was now 2 seconds behind Roglič’s red jersey. 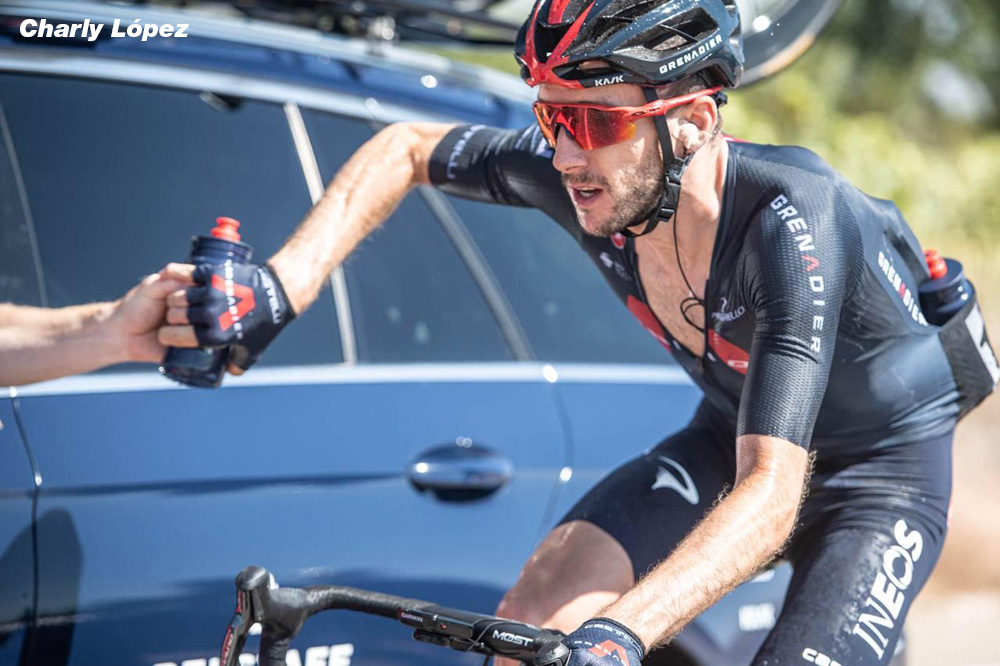 Adam Yates going back to the car for more bottles 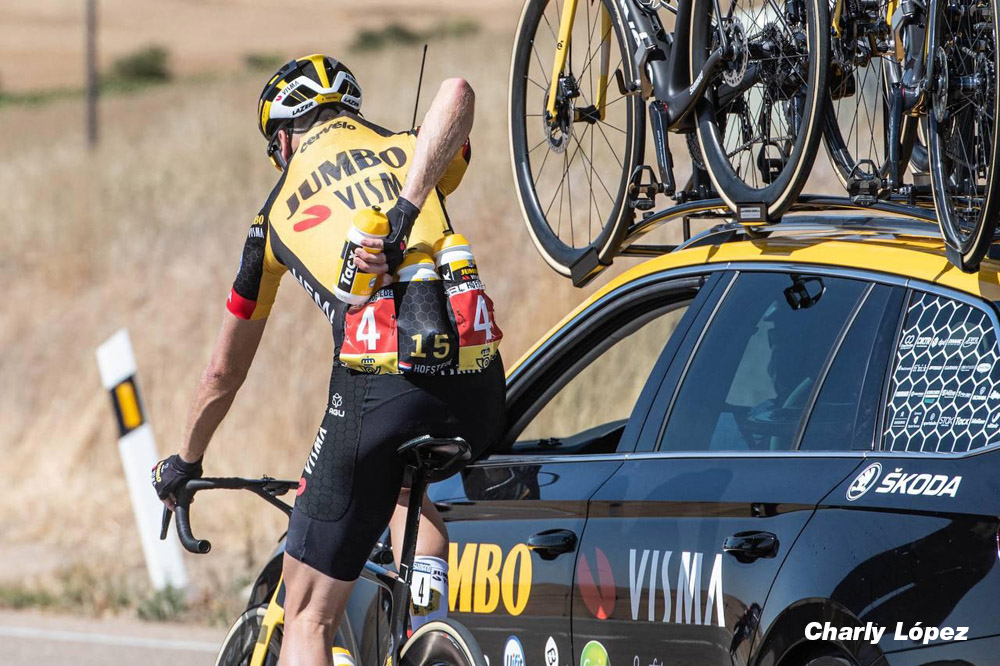 It was a very thirsty peloton today

From that moment on it went full speed to the finish. With 4 kilometres to go there was a crash, with Patrick Gamper and Jordi Meeus among the biggest victims. At the front of the peloton the race continued. Deceuninck – Quick-Step and Alpecin-Fenix ​​led out for Fabio Jakobsen and Jasper Philipsen, and Groupama-FDJ also came up for Arnaud Démare. UAE Team Emirates, for Juan Sebastián Molano, and BikeExchange for Michael Matthews, waited a long time to hit the front. 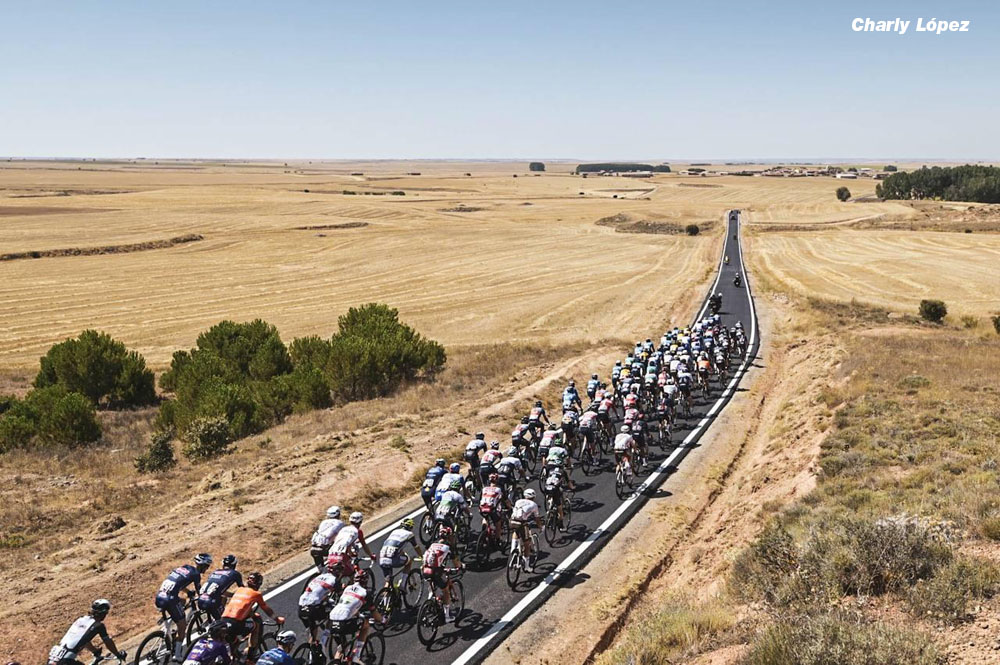 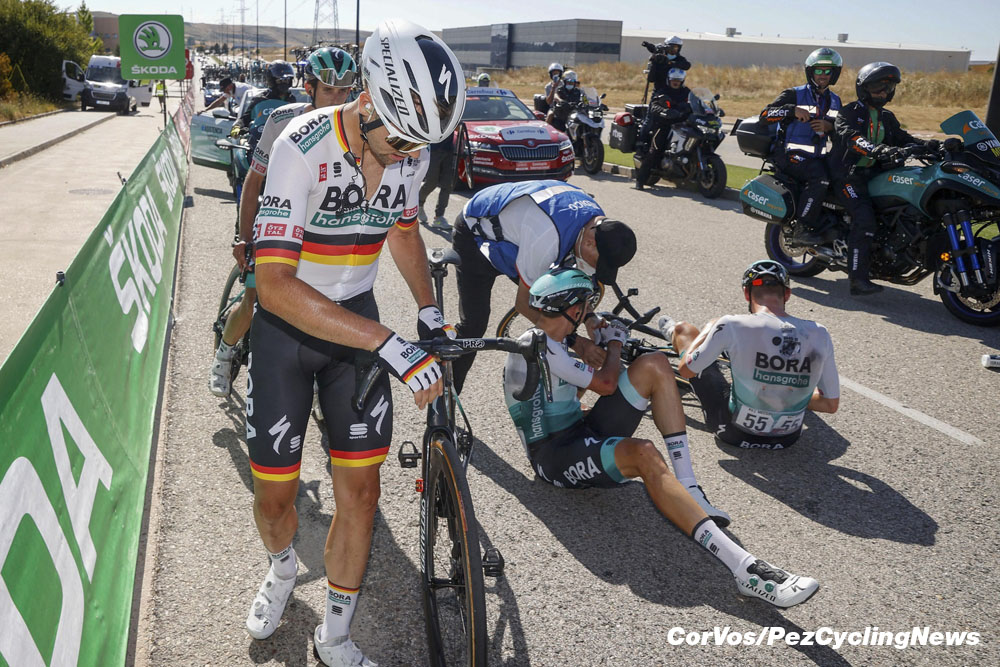 Bad crash for BORA-hansgrohe 4K out

Molano got his lead-out from his Matteo Trenin, but was overtaken by Jasper Philipsen and Fabio Jakobsen. In the end it was the leader of Alpecin-Fenix ​​who went on to win. Jakobsen came in second, ahead of Matthews. 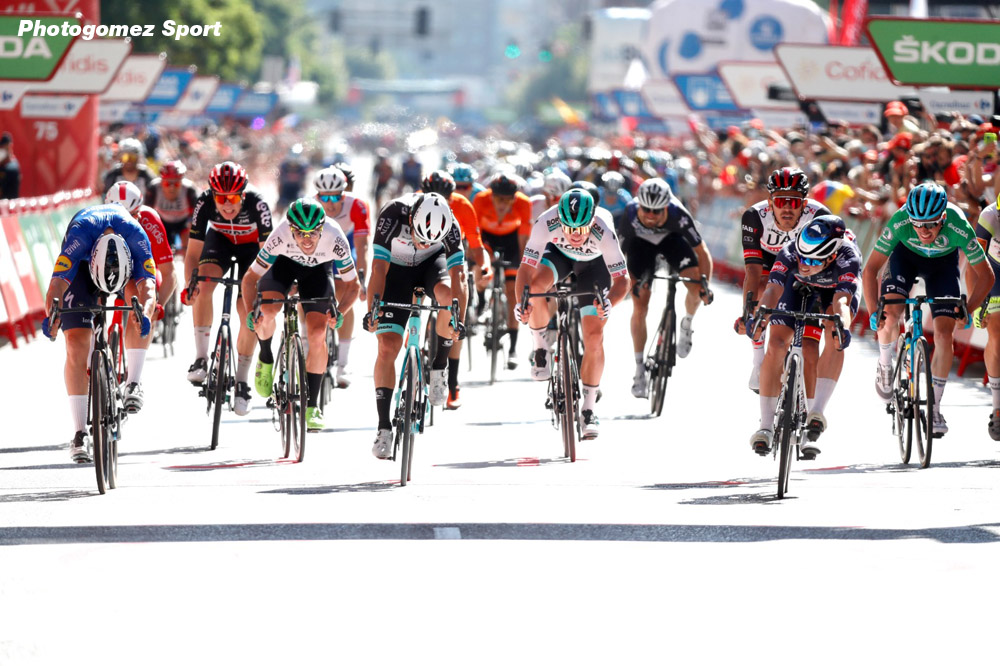 It was close at the line 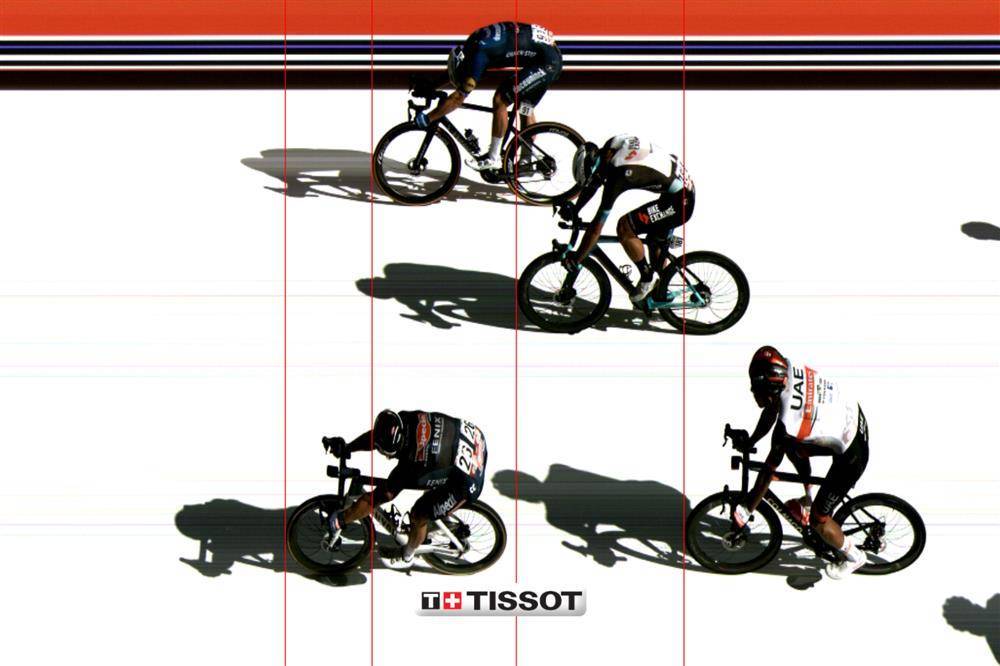 Win by a wheel

Stage winner, Jasper Philipsen (Alpecin-Fenix): “It’s incredible. Yesterday I wrote it in our team chat that for sure it would be a dream. I think this is a real team effort and it’s great to win the first sprint of the three Grand Tours. It was amazing to see all my teammates there and everybody was on the frontline. I trusted the team an I think we did a really good job. We can be happy tonight. For sure I’m really happy that it worked out in the first sprint and now we can go on and try for more.” 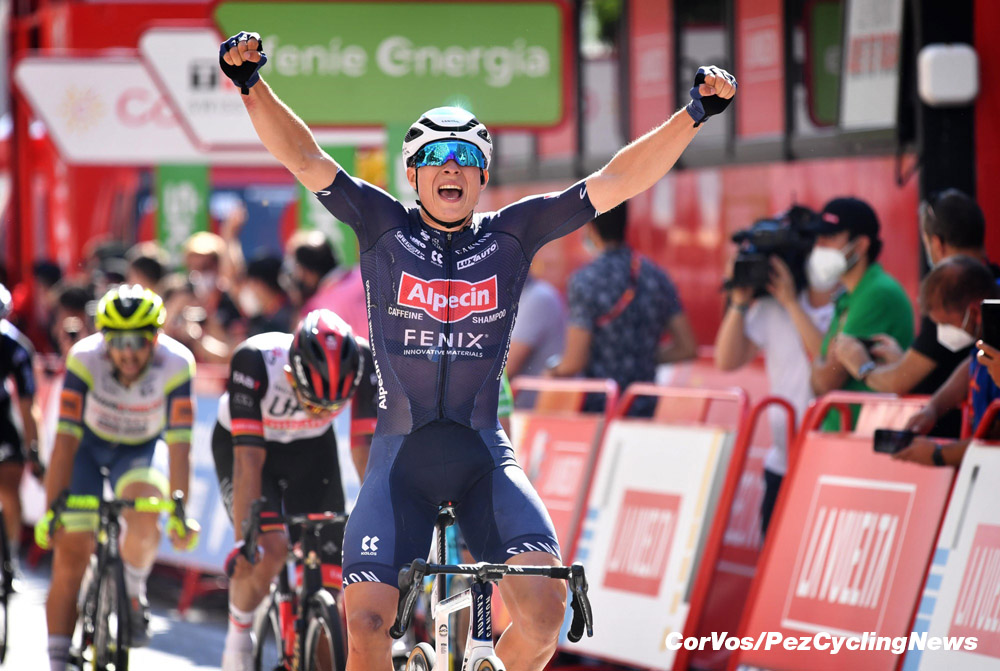 Time to celebrate after the line 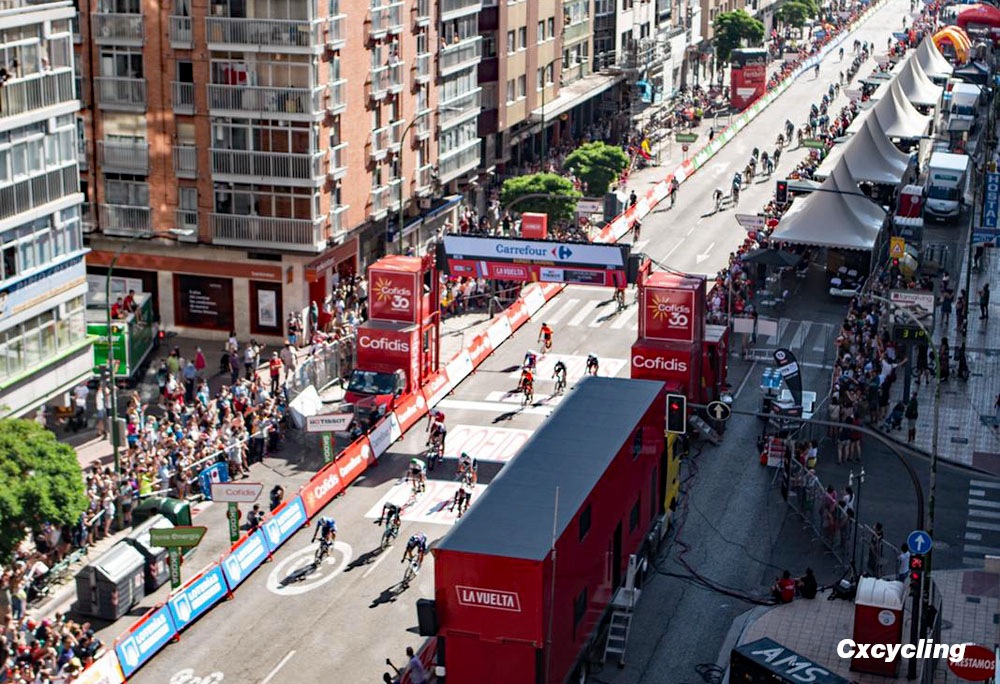 Overall leader, Primoz Roglic (Jumbo-Visma): “Like I said, you need to be on a survival mode in such stages where crashes can happen. You need a bit of luck. Luckily, we went through. [Runner up Alex Aranburu], with the green jersey, he went for the bonus seconds. I wouldn’t mind if he’d take La Roja from me. It wouldn’t change a lot. I know nothing of tomorrow’s uphill finish. We’ll see tomorrow how much I like it.” 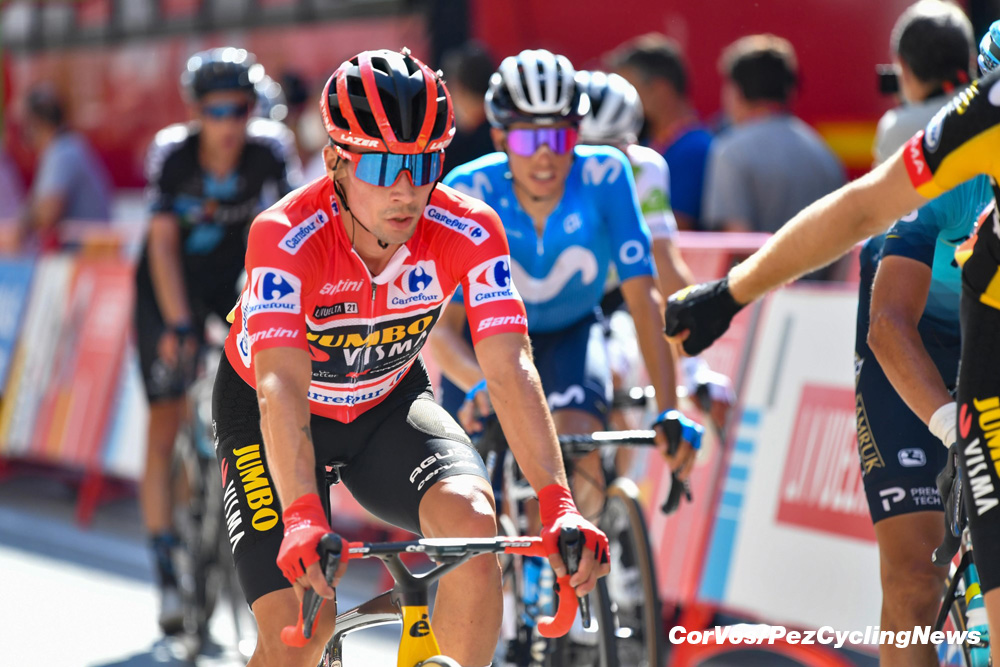 Roglič home and safe in red