Roglič holds the overall into the TT

The penultimate stage of the 2021 Vuelta will be one to remember for a long time. Clément Champoussin won the stage, but this was after a crazy stage of attacks and chases on tough Galician roads. Miguel Ángel López lost his podium spot to Jack Haig, after an attack by the Bahrain Victorious rider, and abandoned the race.

Technical director, Fernando Escartín: “This stage promises to be very entertaining for the spectators. The first part, relatively flat, will give way to a mini “classic”. Constant climbs and descents and five short, but tough mountain passes. A lucky “mini Liège Bastogne Liège” just one stage before the end of La Vuelta 21.” 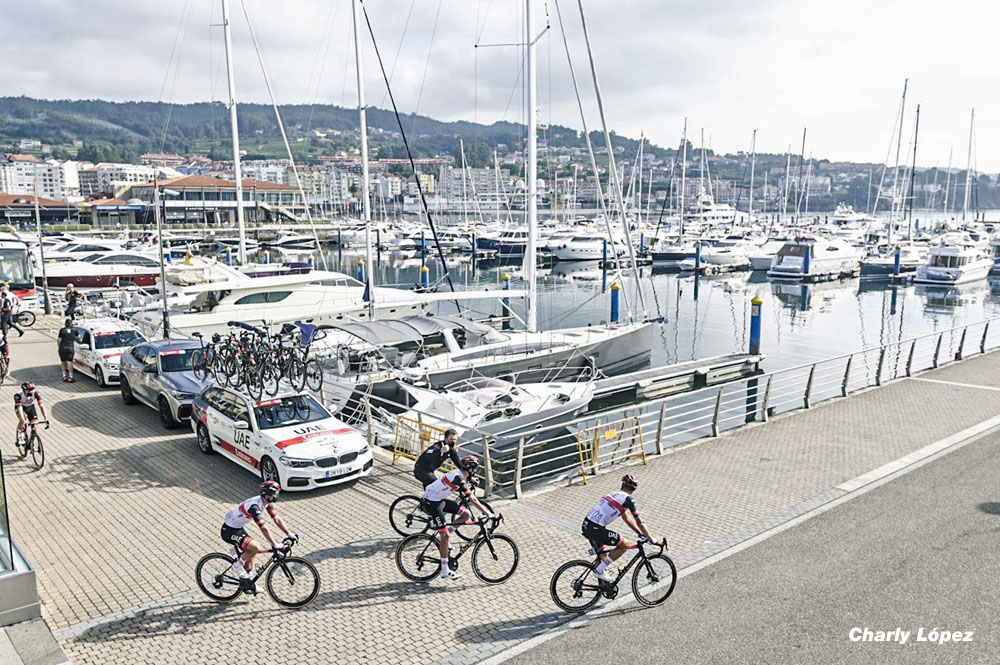 The start of the last road race stage 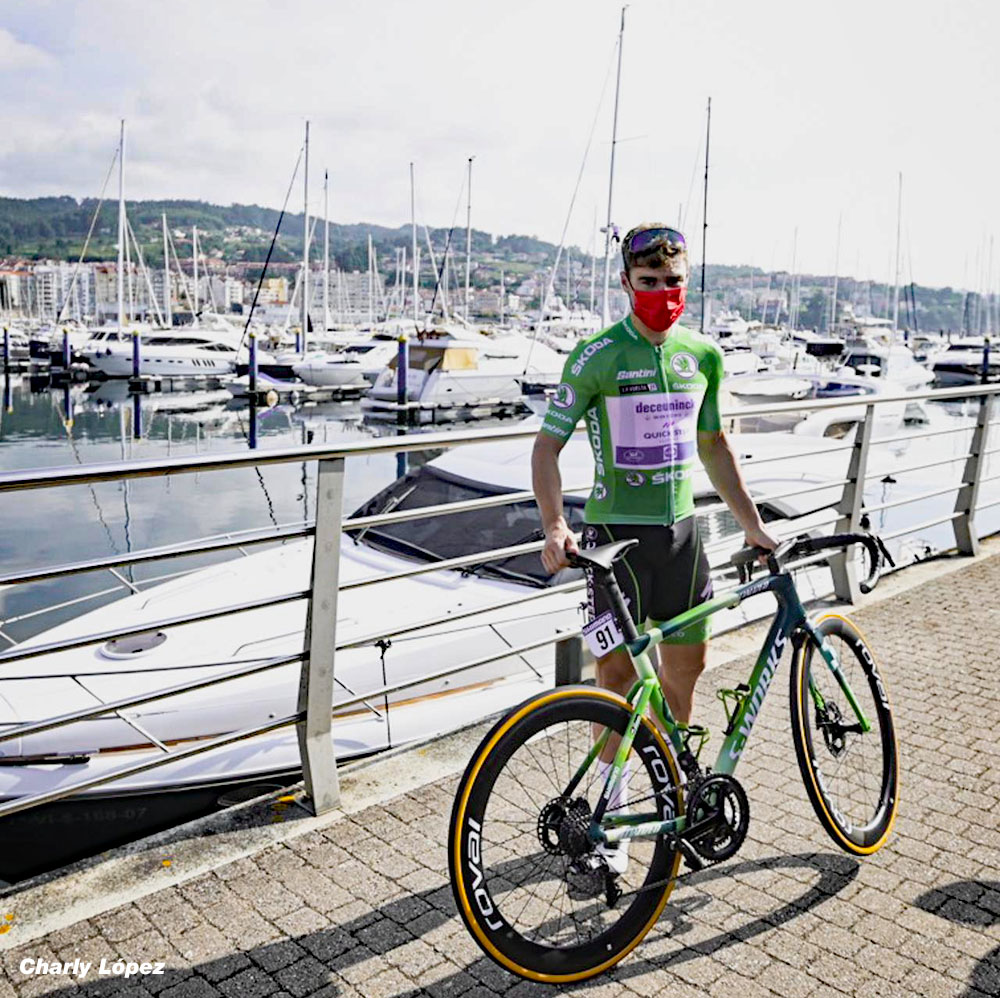 Fabio Jakobsen (Deceuninck – Quick-Step) leads the points classification with 250 points. Primoz Roglic (Jumbo-Visma) is in second with 162, ahead of Magnus Cort Nielsen (EF Education Nippo on 144 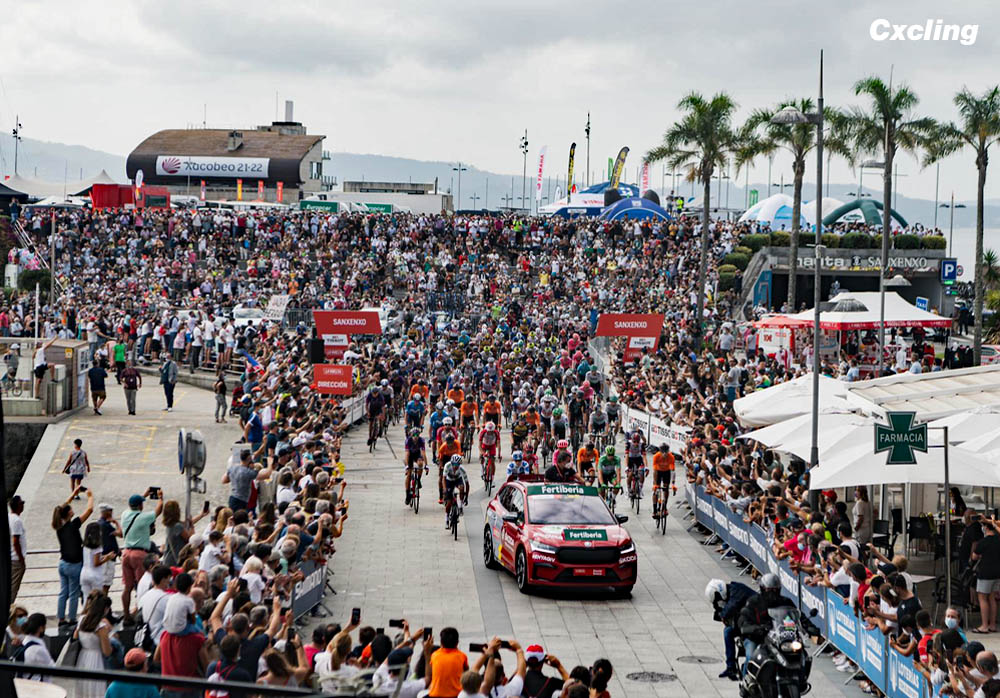 A hilly stage to Alto Castro de Herville gave the escapees and GC riders another chance to play all or nothing in the Vuelta. The Spanish Grand Tour concludes on Sunday with an individual time trial in Santiago de Compostela and today was the last chance for many. 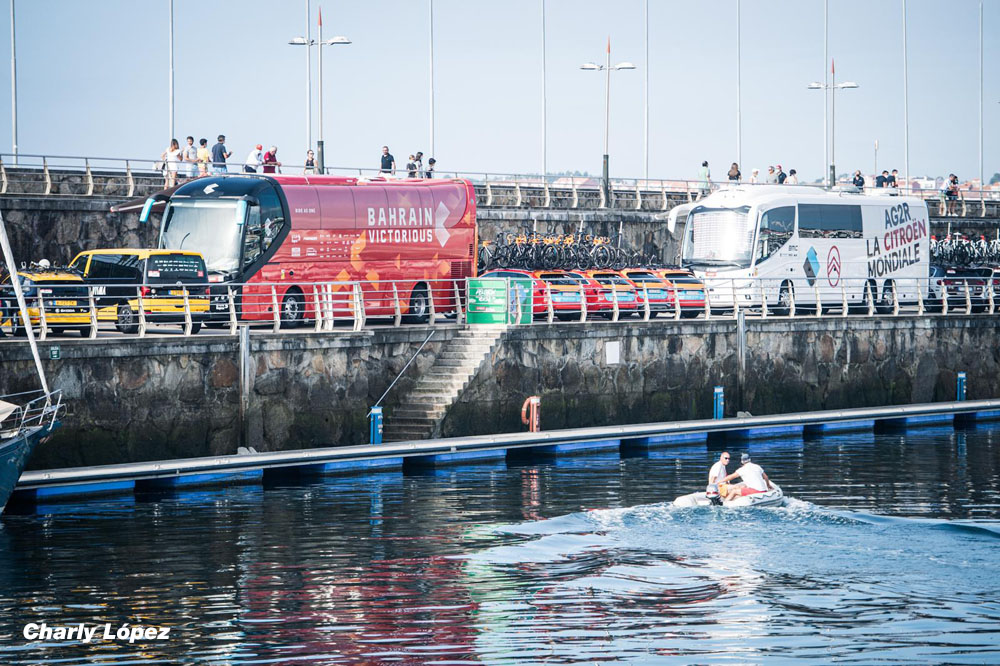 Only two days to go 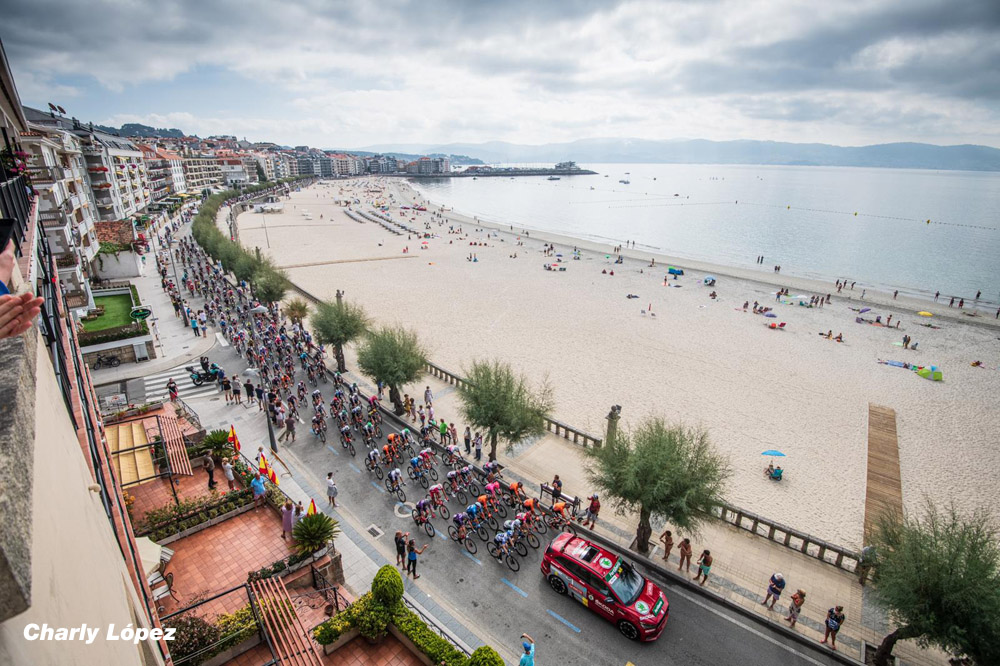 Not many on the beach this morning

With five categorised climbs on the route, there were still plenty of opportunities to force something, and that’s what happened. First by a leading group with Clément Champoussin, Mark Padun, Jesus Herrada, Nick Schultz, Romain Bardet, Chris Hamilton, Michael Storer, Daniel Navarro, Lilian Calmejane, Ryan Gibbons and Mikel Bizkarra who broke away after 10 kilometres and soon had a lead of 12 minutes. 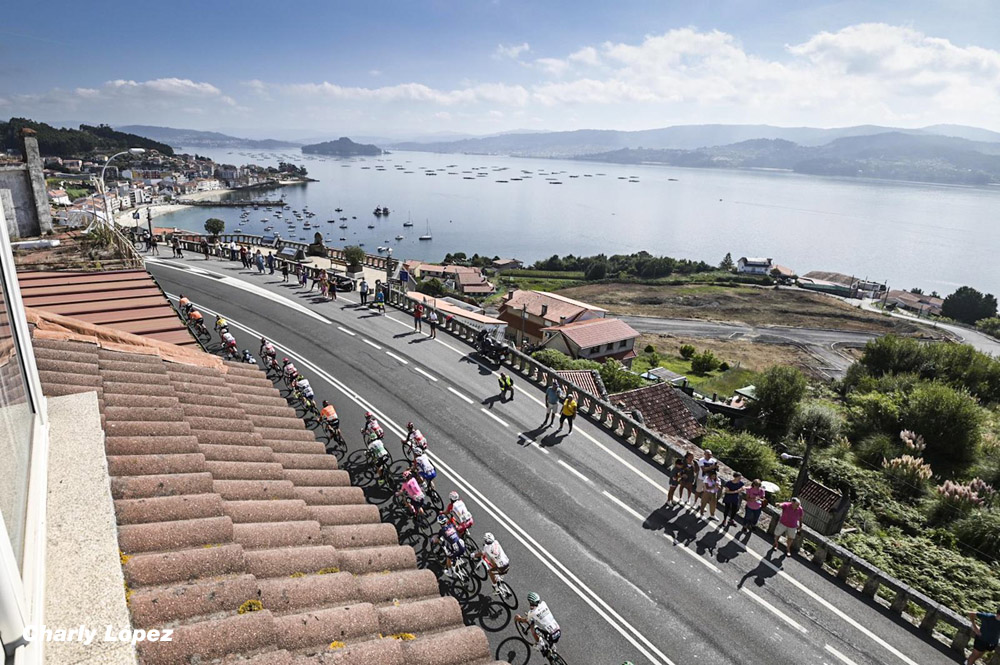 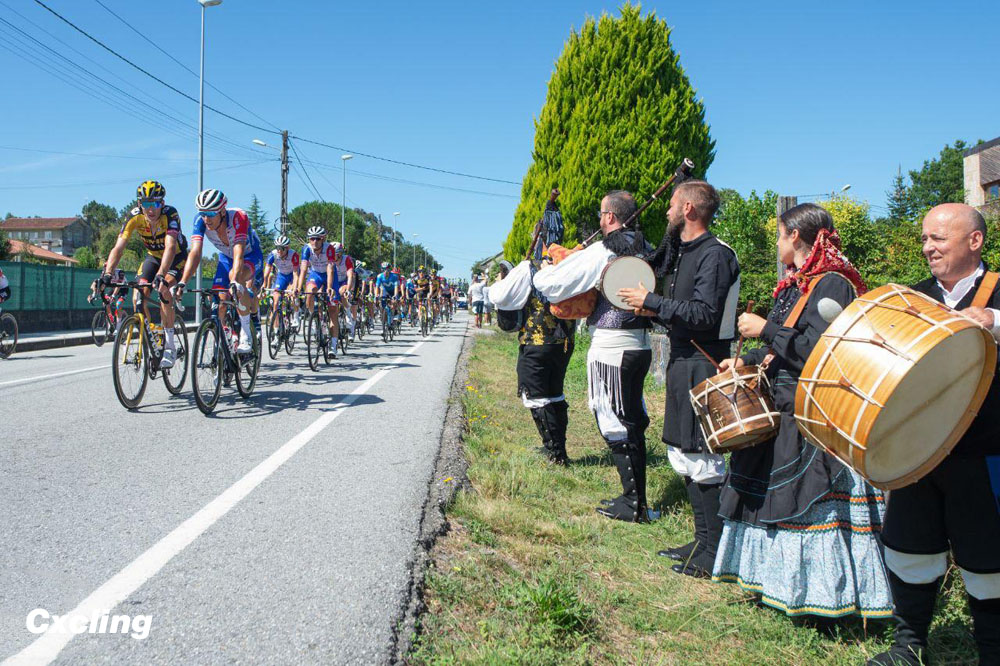 A bit of music while you work

Then the plans of the INEOS Grenadiers team became clear: Put Egan Bernal or Adam Yates on the podium at the end of the day. By leading the peloton, the British backed team halved the lead in no time. The toughest climb of the day was still to be climbed: the Alto de Mougas.

A bit of music while you work

There the leading group fell apart. Gibbons (UAE Team Emirates) took off alone and managed to create a good gap, Bardet, Storer, Calmejane, Padun had to chase. There was still more than 60 kilometres to go. 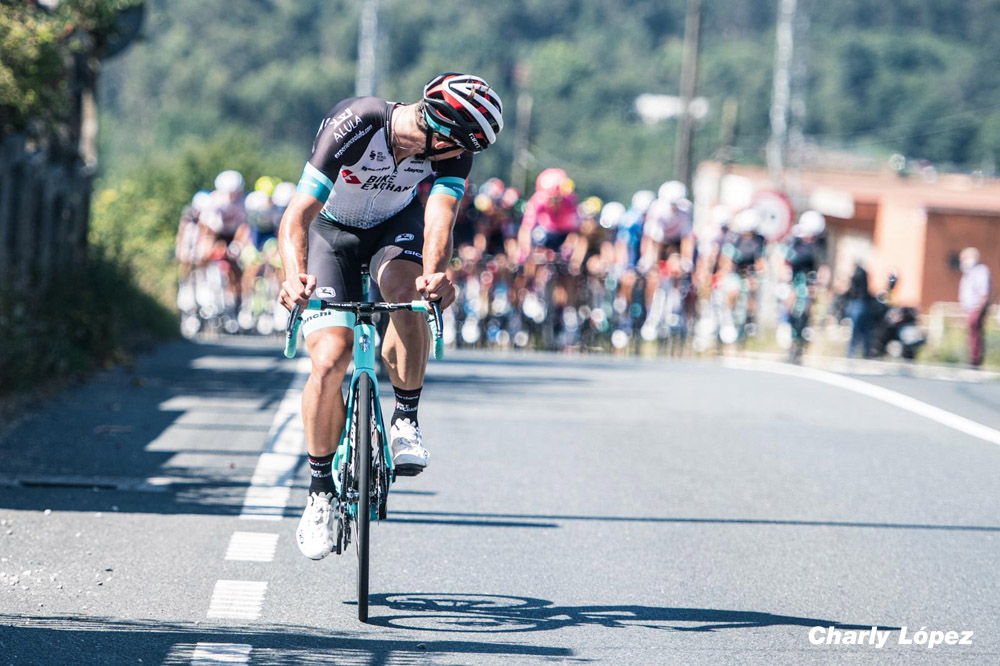 The first attacks were not long in coming 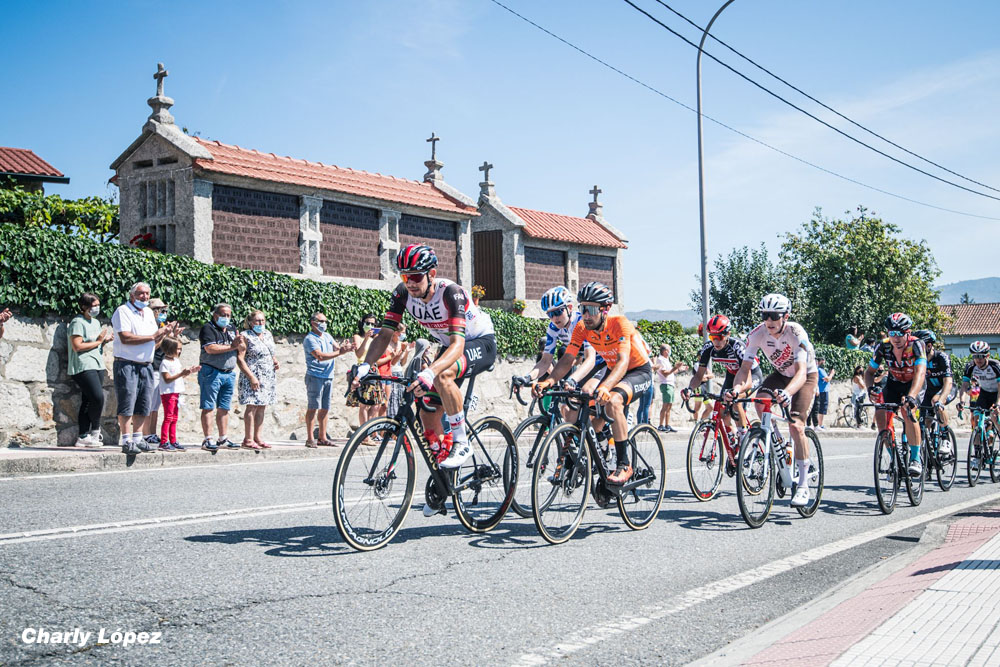 Due to the pace in the peloton their chances of the stage victory dwindled: Yates attacked 60 kilometres from the finish hoping to drop Jack Haig and Miguel Ángel López. The Brit didn’t succeed, but a tactical fight followed in which Haig attacked. Primož Roglič, Enric Mas, Gino Mäder and Yates jumped on him, only to see Bernal and López behind them refusing, or unable to close the gap. 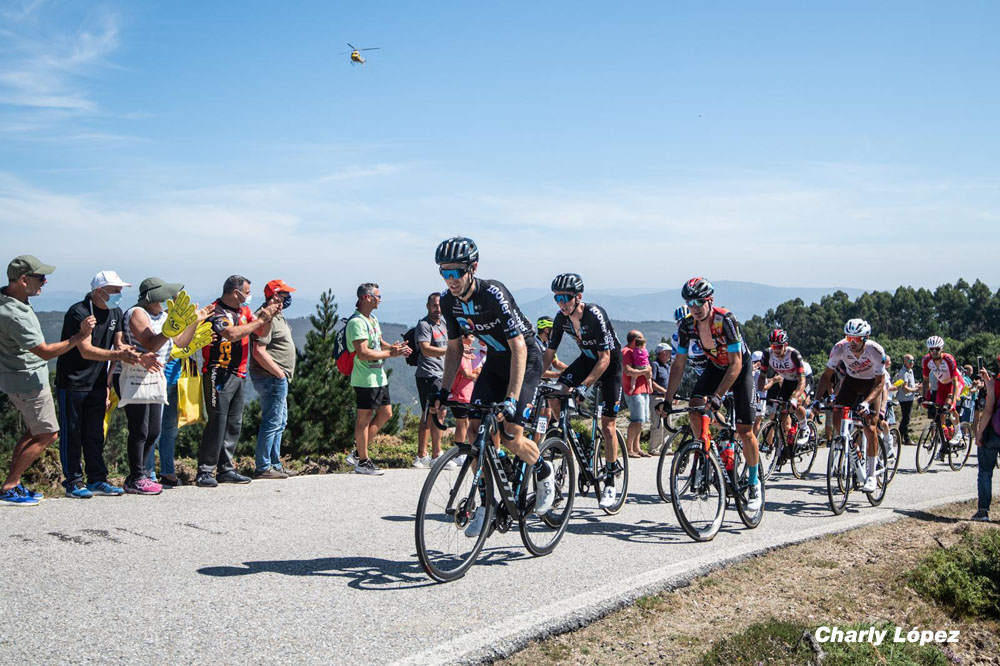 The course was either up or down all day 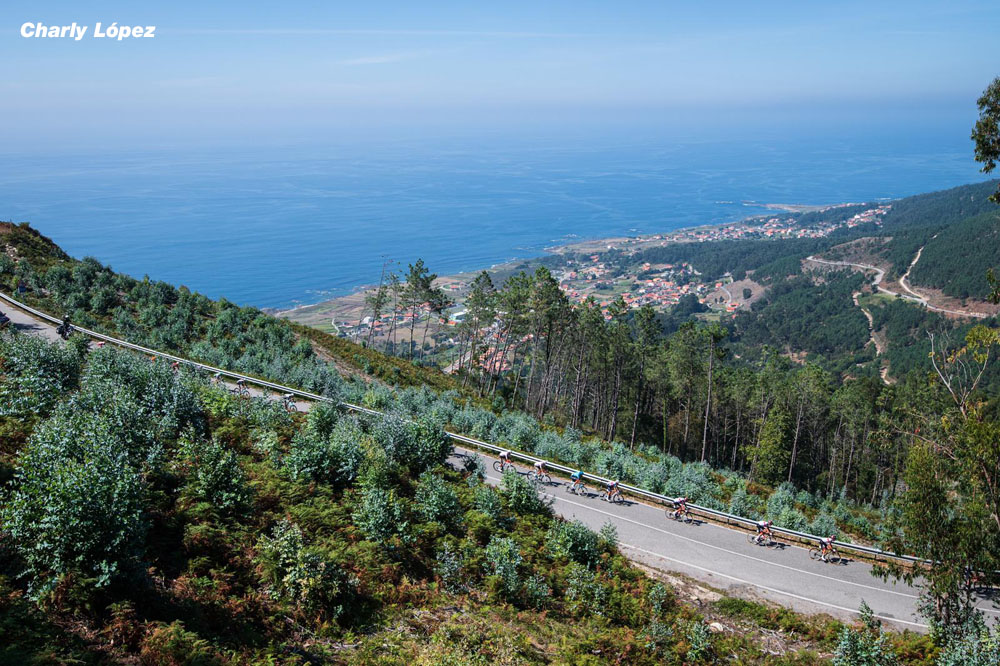 Back to the Galician coast 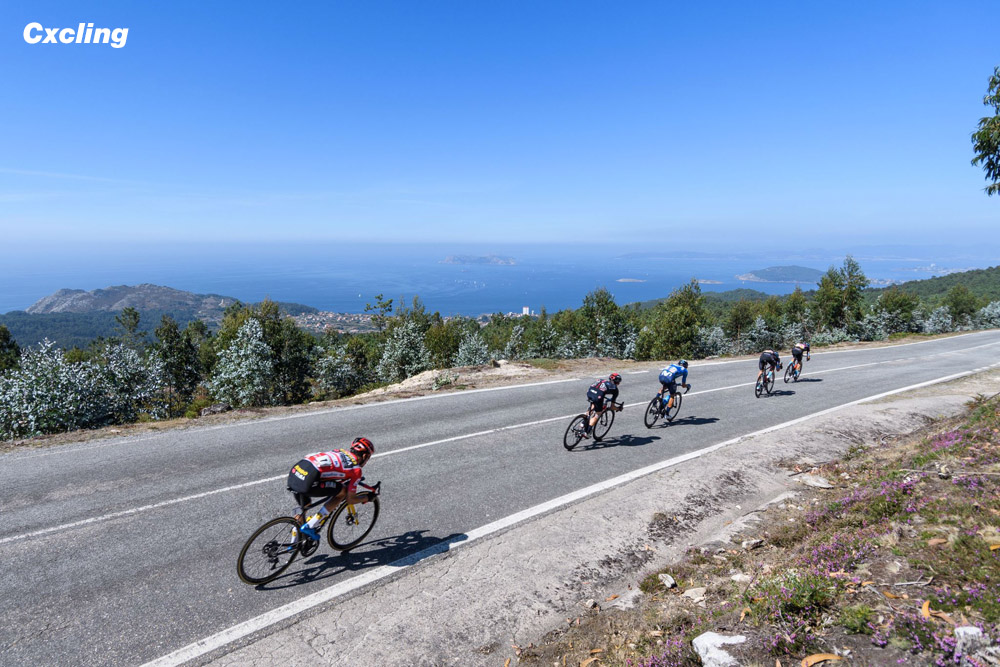 Roglič only had to watch Mas

Haig quickly put Mäder on the front to extend the lead as the Australian still had a chance to put himself onto the podium. The Colombian’s defense was quickly broken, because within 20 kilometres he was at more than 4 minutes. After Padun dropped out of the leading group, his deficit grew further and further. Towards the end of the stage, López angrily gave up the fight and climbed into a team car. 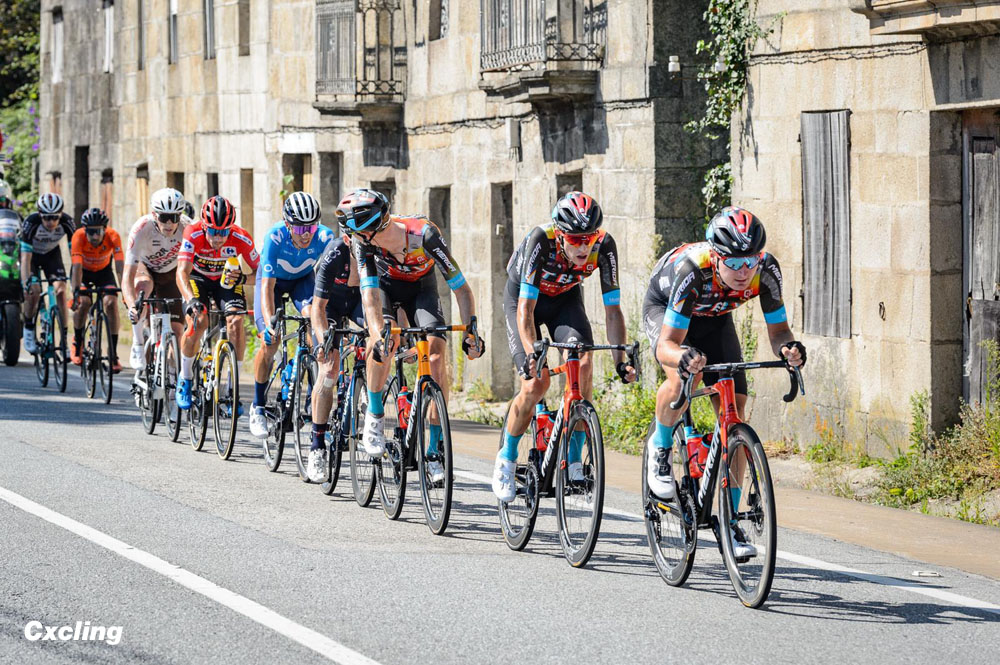 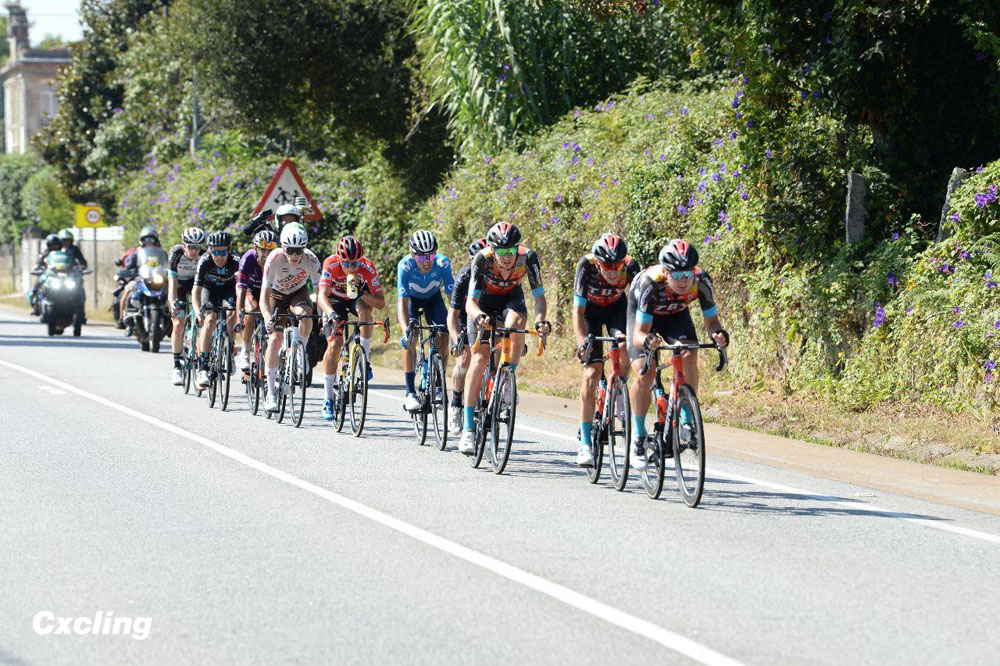 Gibbons was still ahead on the final climb. With a lead of almost 2 minutes, the South African started the last kilometres with hope on his side, but to no avail. When Yates attacked with 6 kilometres to go, his lead vanished. 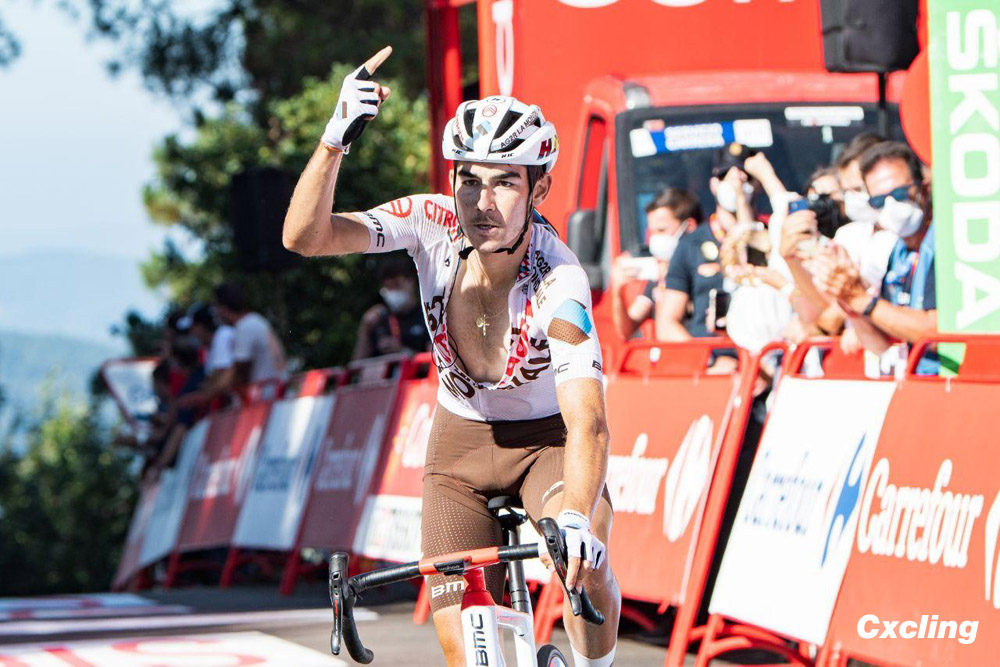 Big win on a big day for Clément Champoussin

Yates, Mas, Roglič and Haig turned out to be the best climbers in the second group as predicted, but they failed to close the last gap. While several riders managed to catch the front group, Gibbons was pulled back. Many attacks followed, but the decisive one came from Champoussin, who took his first professional victory after a tough race. Champoussin – More than happy with his first pro win

Stage winner, Clément Champoussin (AG2R-Citroën): “To be honest, when we got caught at the bottom of the climbing, after being the whole day ahead, it was a bit tough, but the favorites were tired too I think. When they went in the steep part, it was going too fast for me. Afterwards, I was lucky, I ran into Gino Mäder, who brought us back into the group. I hung on, clocked up, and a little over a mile from the finish I was lucky they looked at each other. Since I’m not dangerous, I thought to myself that I had to try to pass a little faster. The last kilometre wasn’t too hard and I was able to stay ahead until the end. It’s a bit unexpected because I’ve had some ups and downs over these three weeks. Yesterday I was really not well. Today I would have been happy to finish the stage. I was with Lilian [Calmejane] and Stan [Dewulf] up front. They helped me a lot all day. I couldn’t miss.” 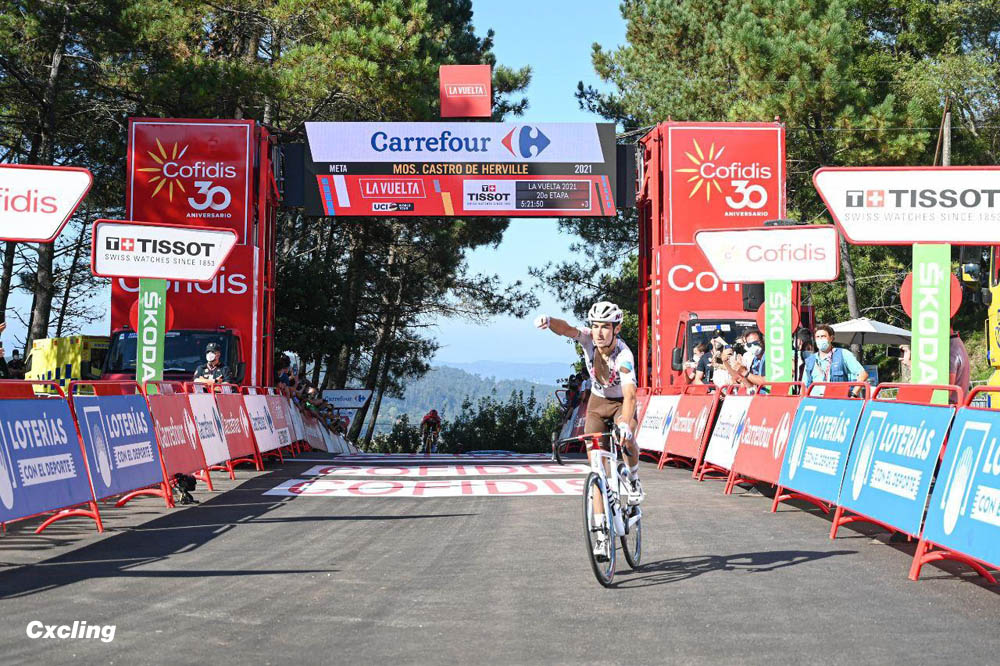 Champoussin may not have been the hero of the day, or even the strongest, but he was the victor

Overall leader and 2nd on the stage, Primoz Roglic (Jumbo-Visma): “I’m super happy with the place I finished in today with the way it went. I couldn’t wish for more. I was mainly looking at [Adam] Yates and Enric [Mas] but at the end there were a lot more guys. We need to be super strong to attack and to go away. I kept everything more or less under control. The first half of the stage was nice. We did the tempo then I expected that the guys went for it in the last mountain stage. Ineos rode hard and the race exploded. I’m looking forward to the time trial tomorrow. We’ve been waiting for this so finally here we are.” 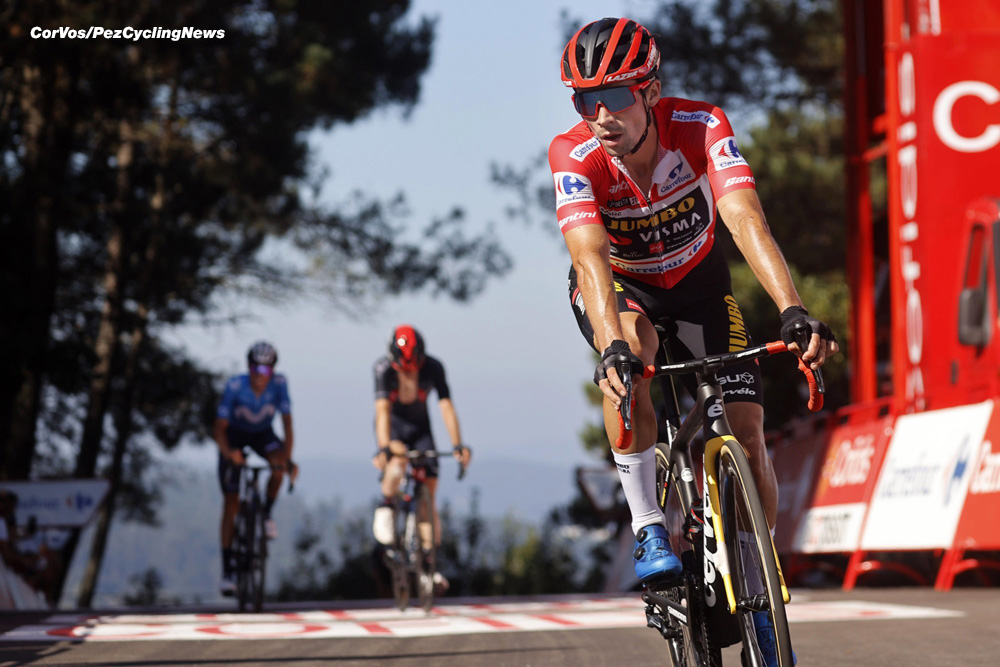 Just the time trial to go for Primoz Roglič