All the Action on Picón Blanco

Vuelta Stage Report: Stage 3 had a nail-biting finish, would the break go all the way to the finish or would the peloton pull them back on the climb to the summit of the Picón Blanco. In the end it was Rein Taaramäe who held out for the stage win and gave his Intermarché-Wanty-Gobert team the overall lead.

The first mountain stage in the Vuelta a España was won by Rein Taaramäe. The 34-year-old Intermarché-Wanty-Gobert rider was the first over the top of the steep Picón Blanco in the Burgos region. Taaramäe was the best of a leading group that could not be caught by the peloton. 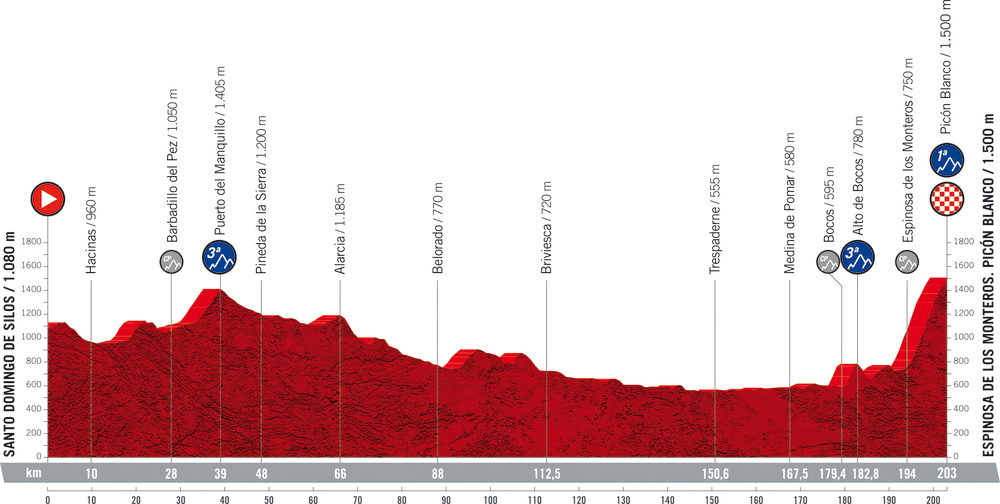 Technical director, Fernando Escartín: “The first high-altitude finale, both demanding and unprecedented, will take place in the third stage of La Vuelta 21. Generally flat route, with a finale on the Picón Blanco, a tough mountain pass, with slopes of up to 17% that may mark the first differences among the favourites.” 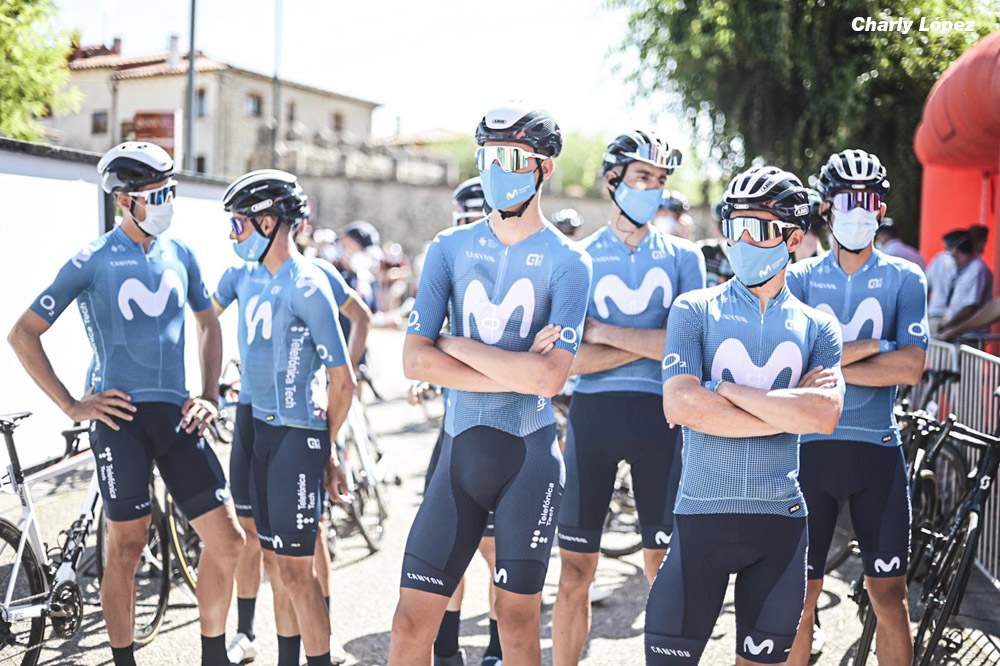 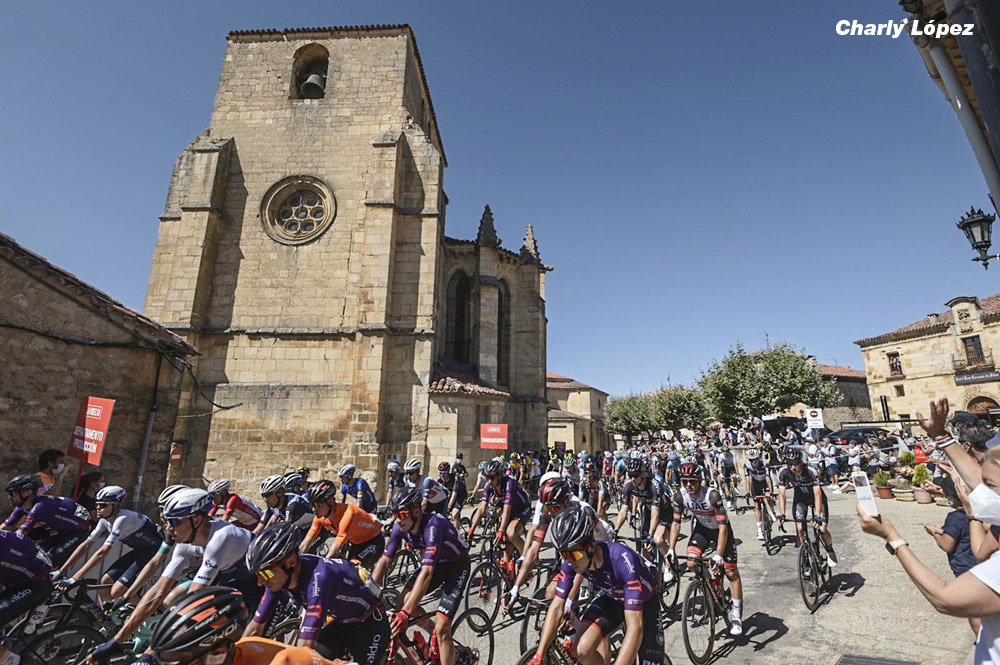 Not as hot as Saturday and Sunday 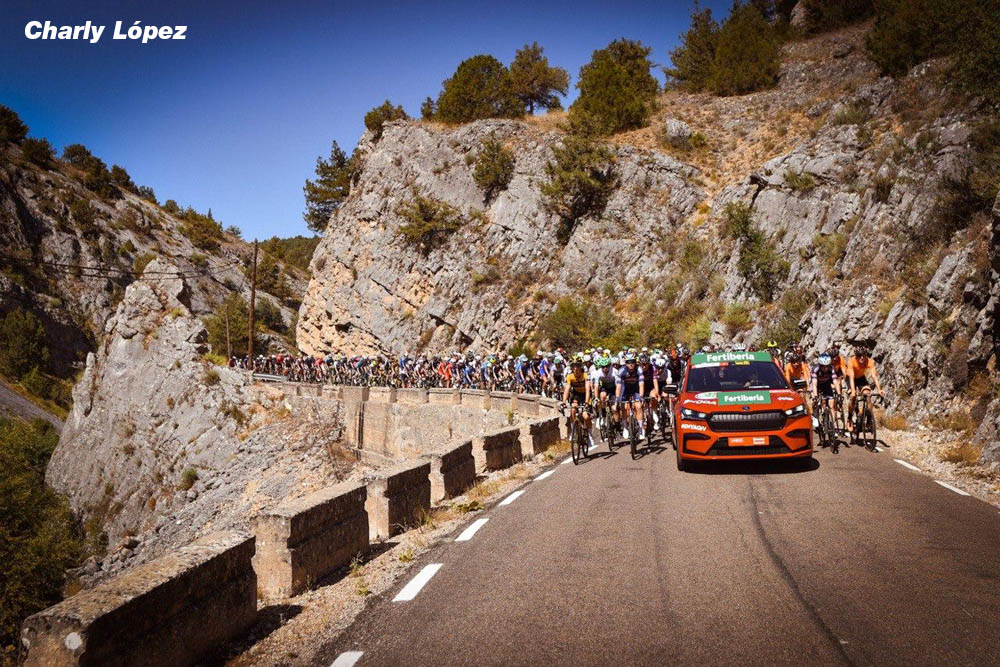 The best placed rider in the leading group was Soto, 29 seconds behind red jersey Primoz Roglič. Jumbo-Visma went to the head of the bunch, but there was little urgency. The lead grew to more than 9 minutes and it looked like Jumbo-Visma wanted to ‘give away’ the red jersey to anyone who would like to take it. 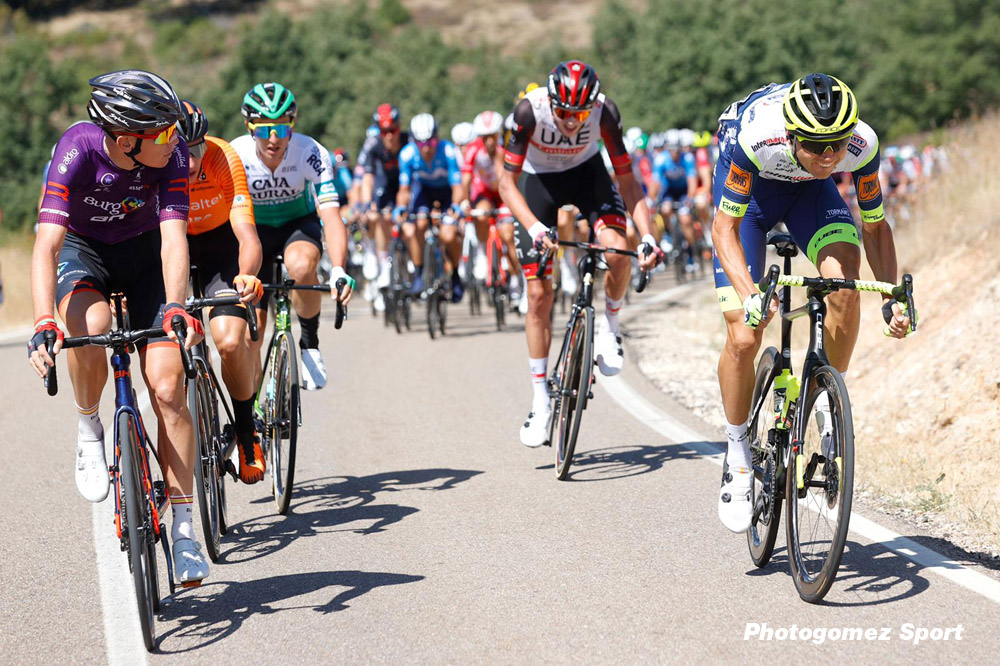 The attacks came from the gun

In addition to Soto being the closest to the red jersey, Bayer was at 33 seconds from Roglic, Calmejane at 0:38, Elissonde at 1:11, Amezqueta at 1:19, Taaramäe at 1:28 and Bol at 1:37, all had opportunities. Dombrowski was more than 3 minutes behind. 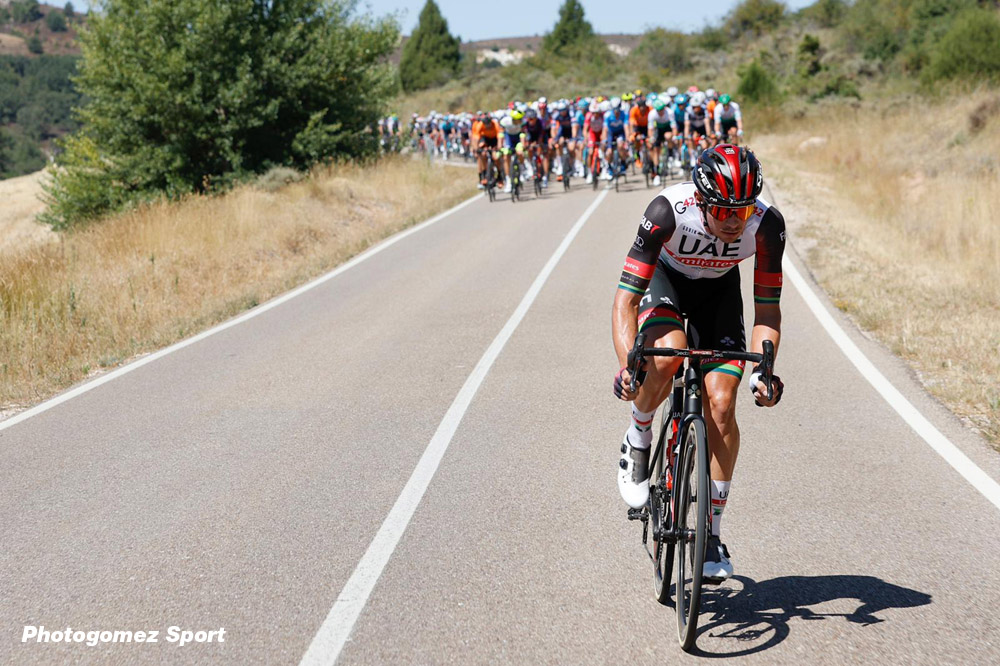 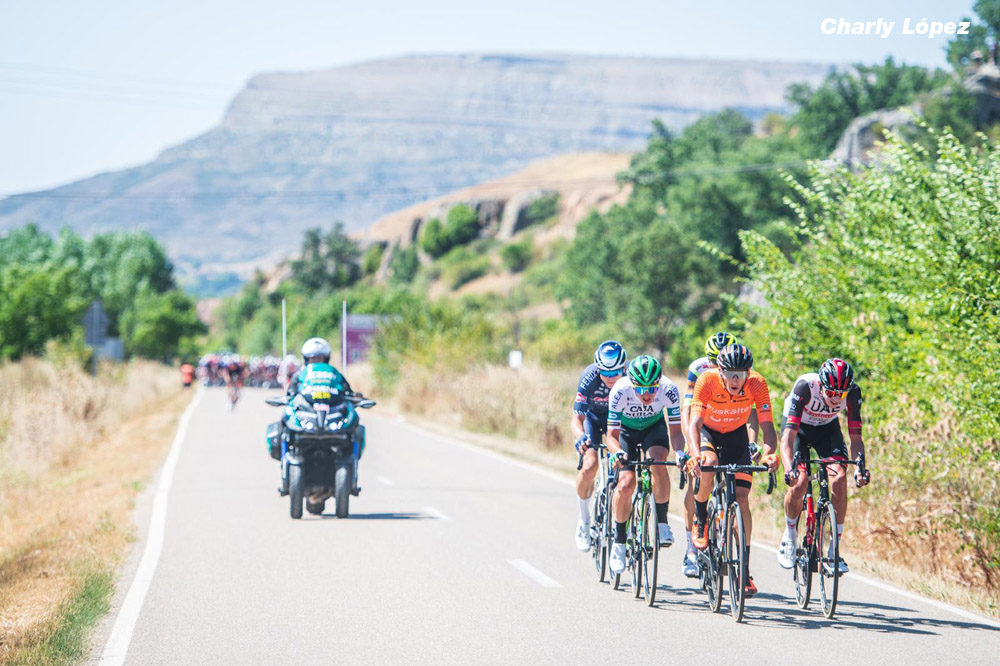 And the break of the day was soon to form

Thirty kilometres before the finish, the difference was still 9 minutes between the leaders and the peloton. The pace then increased in the undulating run-up towards the final climb. All the teams wanted to keep their leader out of trouble. 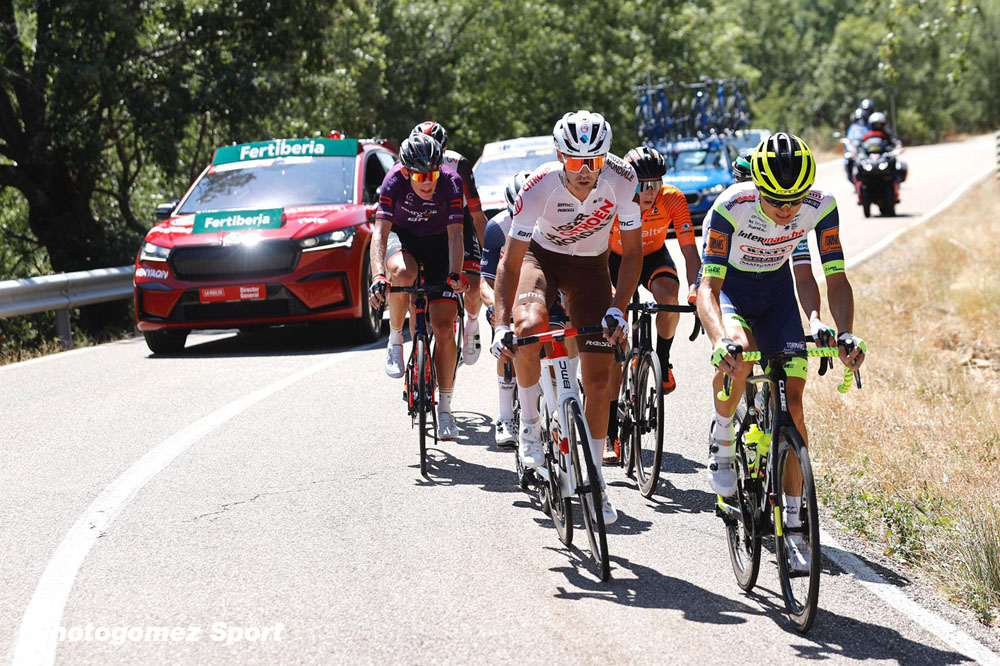 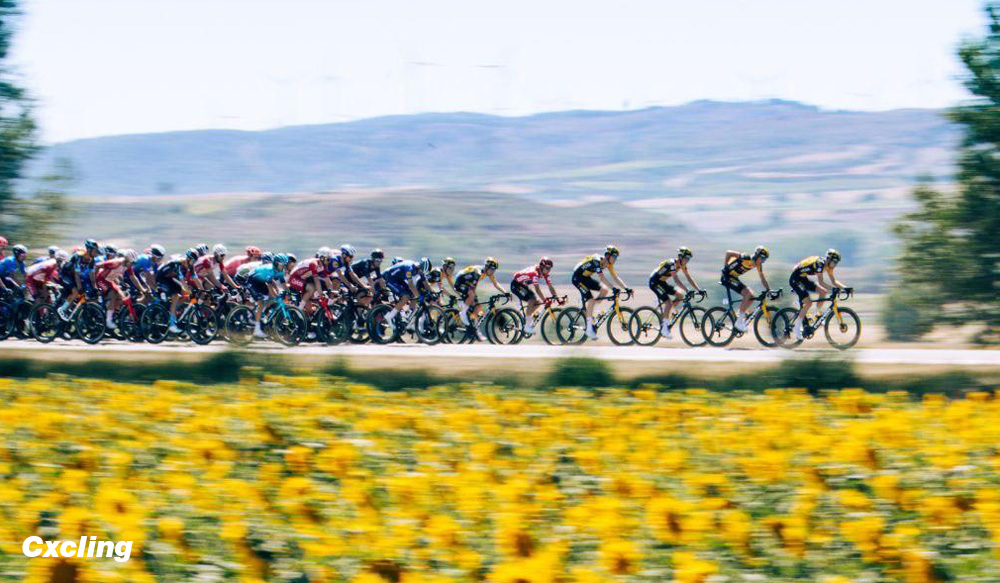 Mikel Landa’s Bahrain Victorious was one of those teams that narrowed the gap to under 4 minutes. At the front it was Calmejane who jumped away from the leading group 13 kilometres from the finish. He started the final climb with 20 seconds ahead of his fellow escapees, the peloton followed at 3:30. 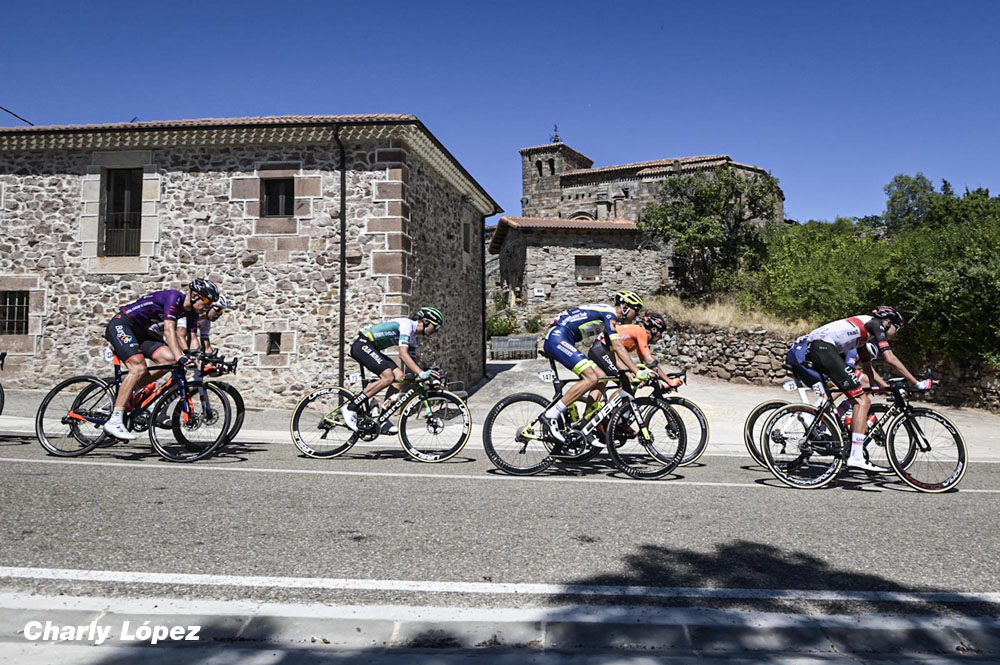 Could they hold off the bunch to the final climb

On that Picón Blanco (7.6 kilometres at 9.3%) it was all hands on deck. Taaramäe set the pace in the leading group and pulled Calmejane back. This was too fast for Bol who was dropped early. Elissonde, Amezqueta, Dombrowski and Calmejane were able to keep with Taaramäe’s pace, although Caja Rural-Seguros RGA Spaniard was having a hard time. Calmejane also dropped out on a steep section when Dombrowski accelerated. 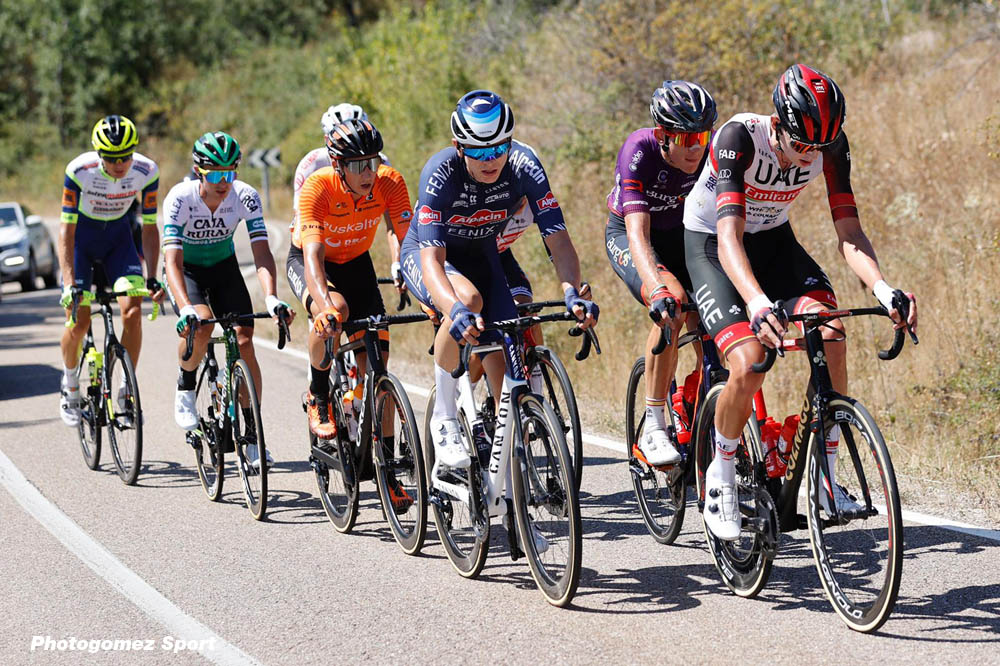 100 kilometres to go and the leaders had over 6 minutes 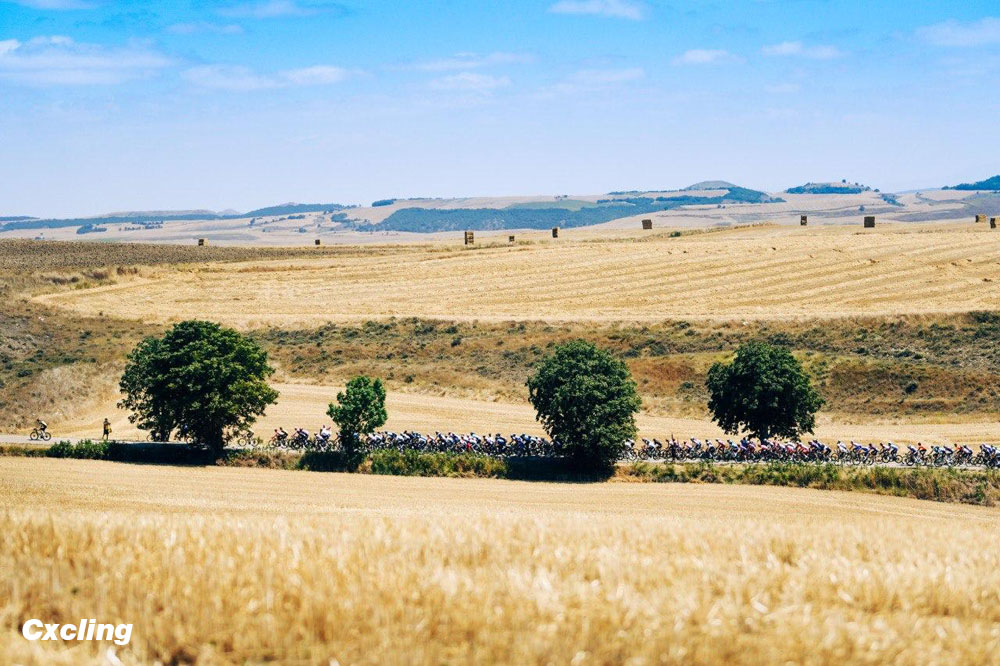 The flat before the steep finish

Dombrowski, Taaramäe and Elissonde were left at the front. Of those three, the Intermarché-Wanty-Gobert rider was the strongest. At 2.8 kilometres from the line, he made an attack that Elissonde and Dombrowski couldn’t follow. This turned out to be the decisive move by Taaramäe, who braved the headwind and the fog to give his Belgian team a stage victory in the Vuelta a España. 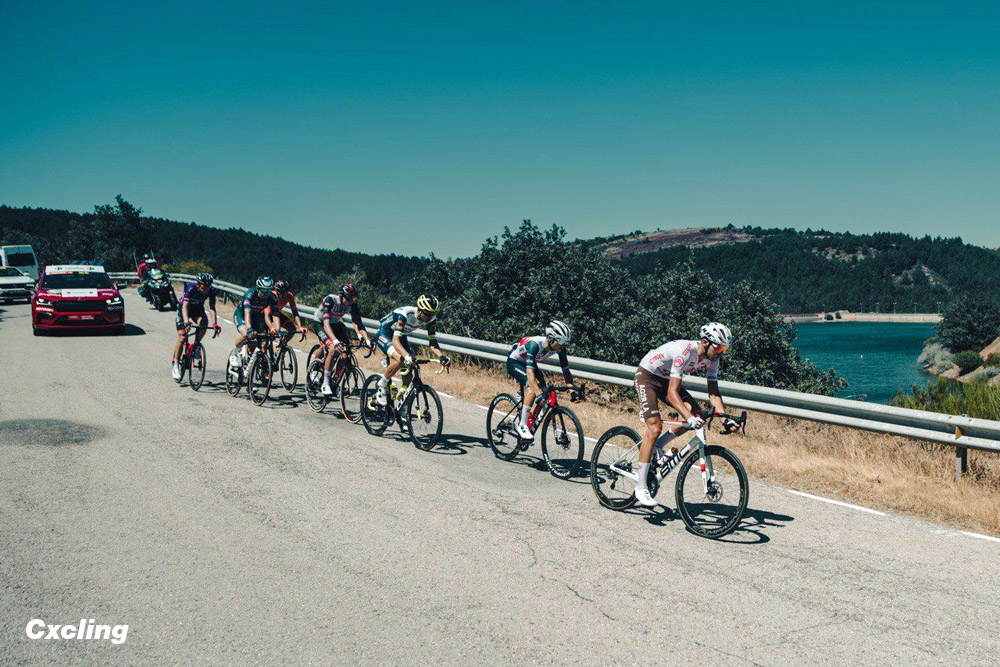 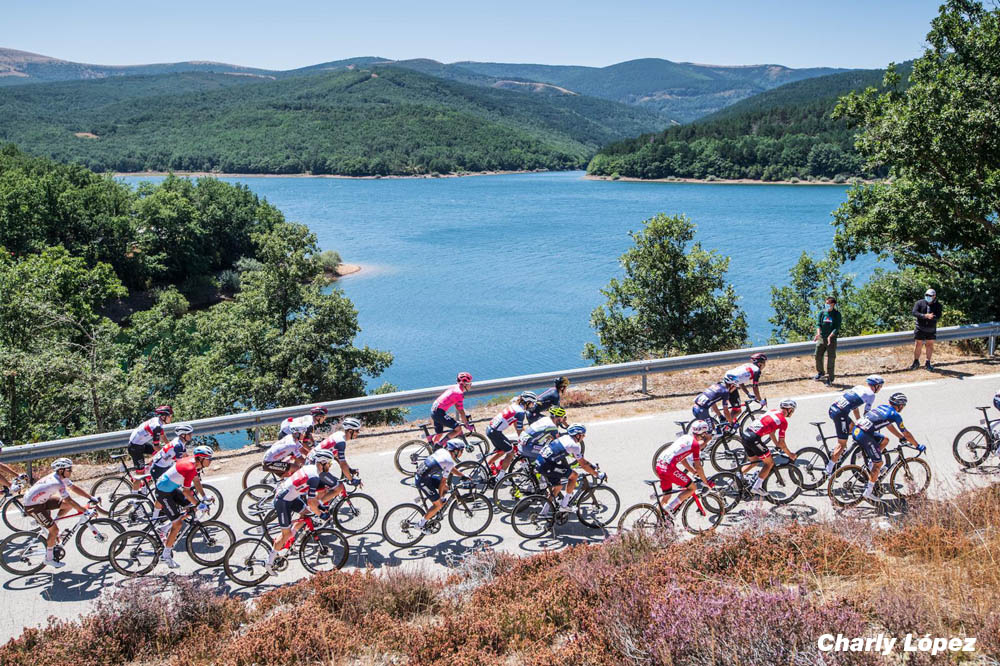 The peloton eventually lifted the pace

Ten years ago, in the 2011 Vuelta, Taaramäe also won a mountain stage. Then he was the best at Lagos De Somiedo. 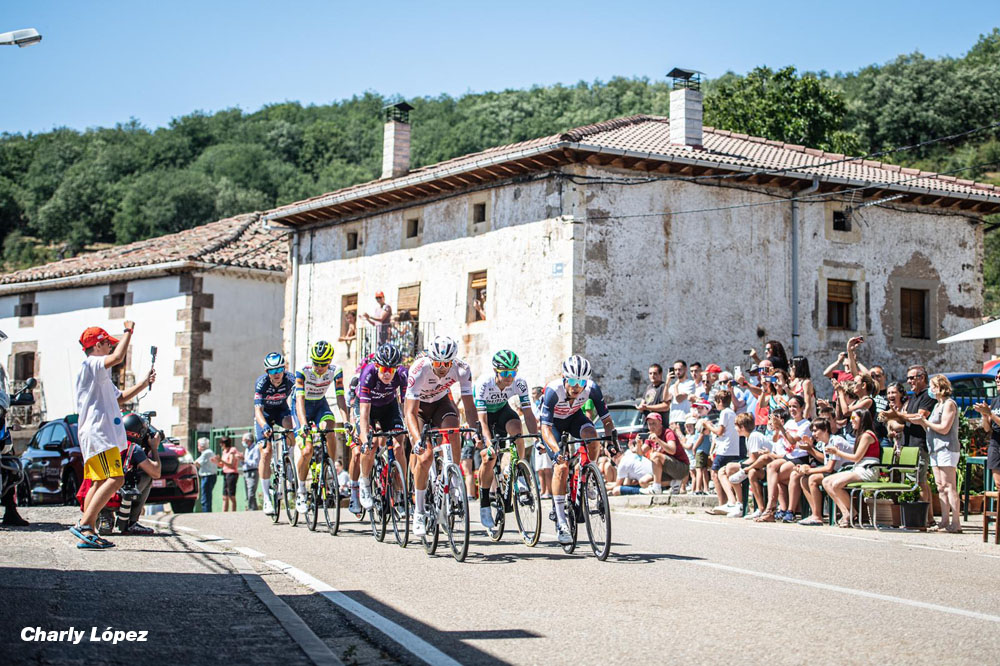 Could the break hold off the peloton?

In the peloton, the Bahrain Victorious climbing train put in a strong effort on the Picón Blanco. After Mark Padun, it was up to Wout Poels to raise the pace for Landa. This was at the expense of Steven Kruijswijk, mountain jersey wearer Sepp Kuss and Andrea Bagioli, and others. A first real attack came from David De la Cruz, but the UAE Team Emirates rider couldn’t get far away – partly due to the headwind on the climb. 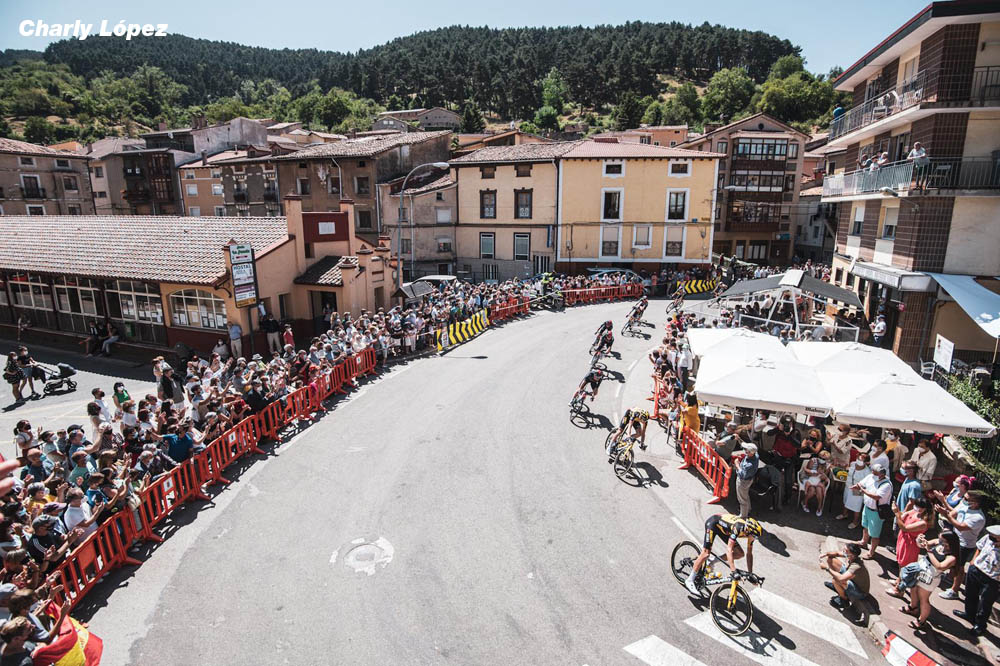 The lead was disappearing 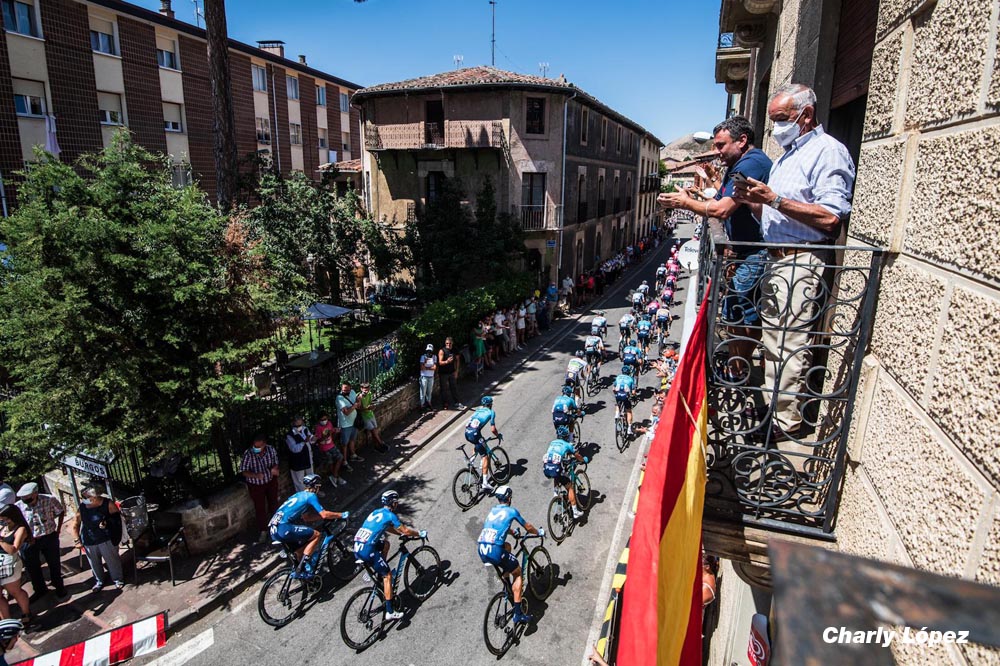 The peloton were waiting for the finalé – Would it be too late?

A bad moment came for Olympic champion Richard Carapaz, who ran into problems 3 kilometres from the top. He managed to come back, but when the pace was picked up again it was too fast for the Ecuadorian. Adam Yates in turn attacked again in the favourites group, but he did not get away either. Alejandro Valverde led the favourites group in the final kilometre for Enric Mas. He thinned the group and Mas took a few seconds in the sprint, ahead of Miguel Ángel López and Primož Roglič. Hugh Carthy and Aleksandr Vlasov lost some time, although Carapaz was the big loser of all the intended top GC men. 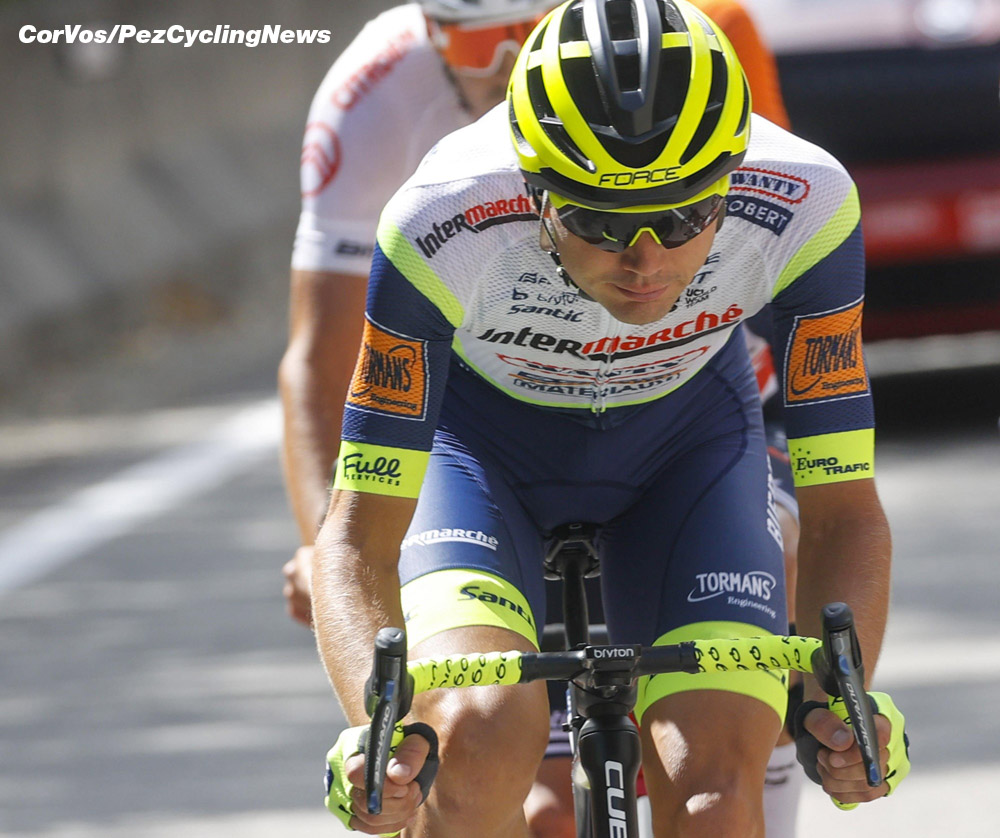 Taaramäe was by far the strongest of the lead group

Rein Taaramäe is the new leader of the General Classification. He is 25 seconds ahead of Kenny Elissonde and 30 seconds on Primož Roglič. Enric Mas managed to grab 3 seconds and he is now 5th overall at 45 seconds from Taaramäe. Behind him are Miguel Ángel López, Alejandro Valverde, Giulio Ciccone, Egan Bernal and Mikel Landa. They are all within 40 seconds of Roglič. 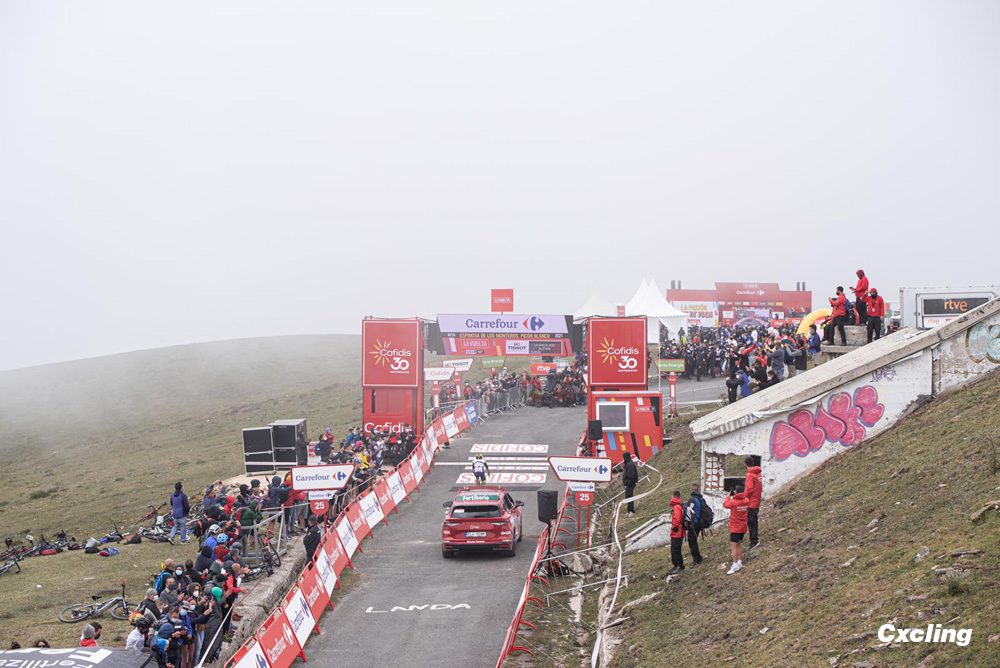 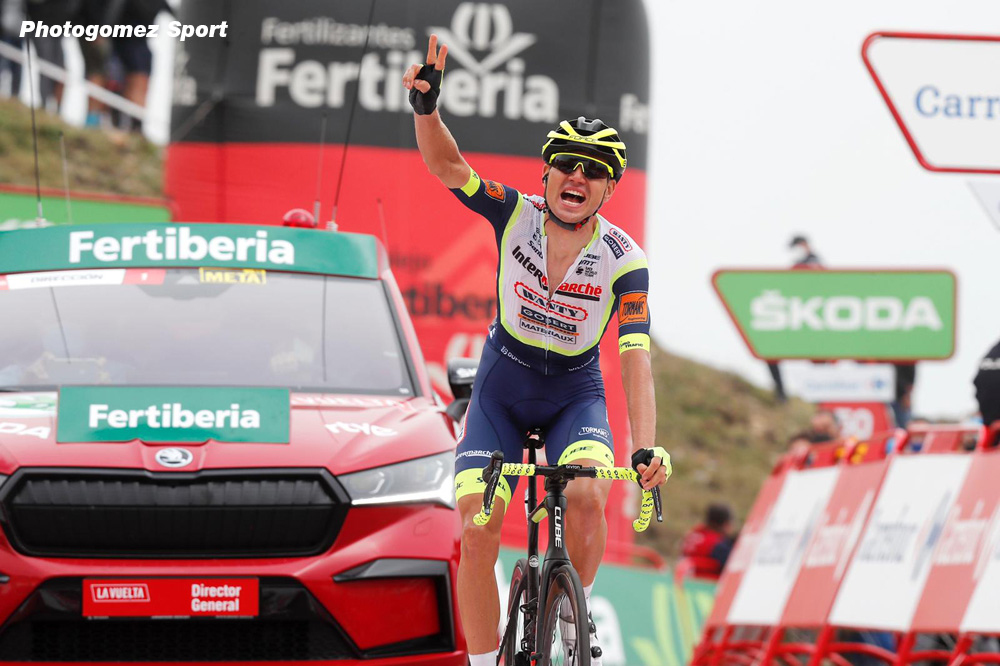 The big win and overall lead for Rein Taaramäe

Stage winner and overall leader, Rein Taaramäe (Intermarché-Wanty-Gobert Matériaux): “I have a very smart sports director, Valerio Piva, and yesterday we spoke about trying to win the stage and take the leader’s jersey. I believed a lot in myself today because I’m in a good shape. It was all about the peloton catching us or not. When I saw that we were gonna do it, I was wondering how good Joe Dombrowski and Kenny Elissonde would be. The others were also really good but I know Joe and Kenny are big quality. But I believed in myself, because I already beat them. When I won a stage in the Giro (2016), Joe was 3rd. And now we were fighting against each other again. It’s huge [to lead La Vuelta] because I’m 34 years old and I don’t have many years left. I had won a stage in La Vuelta, in the Giro, but I dreamed about leading a Grand Tour, to enjoy the jersey at least for some days and feel how it is. I was close in the Giro when Dombrowski won stage 4. I’m very very happy that I’ve done it today.” 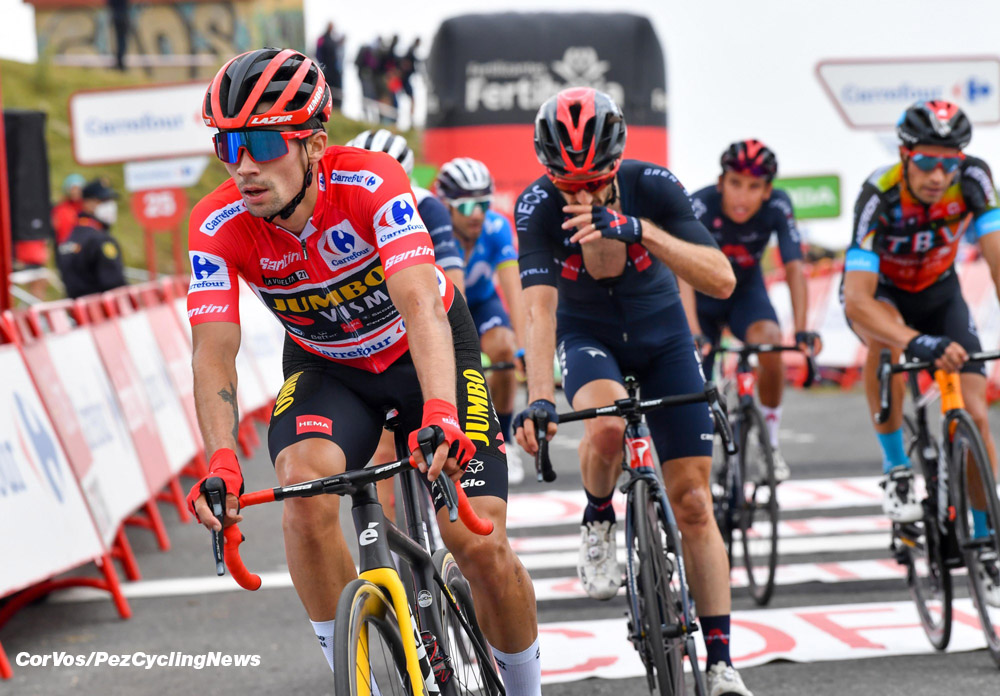