The last K of stage 5

Jasper Philipsen won stage 5 of the Vuelta a España in Albacete. The Alpecin-Fenix sprinter emphatically beat Fabio Jakobsen and Alberto Dainese in his second stage win in the Vuelta. Rein Taaramäe crossed the line over 2 minutes down and so the red jersey went to Kenny Elissonde.

Technical director, Fernando Escartín: “Practically flat stage which promises to be another good day for sprinters. The main danger may be the wind. The area where the stage takes place is very open and strong gusts of wind may complicate the day’s racing.” 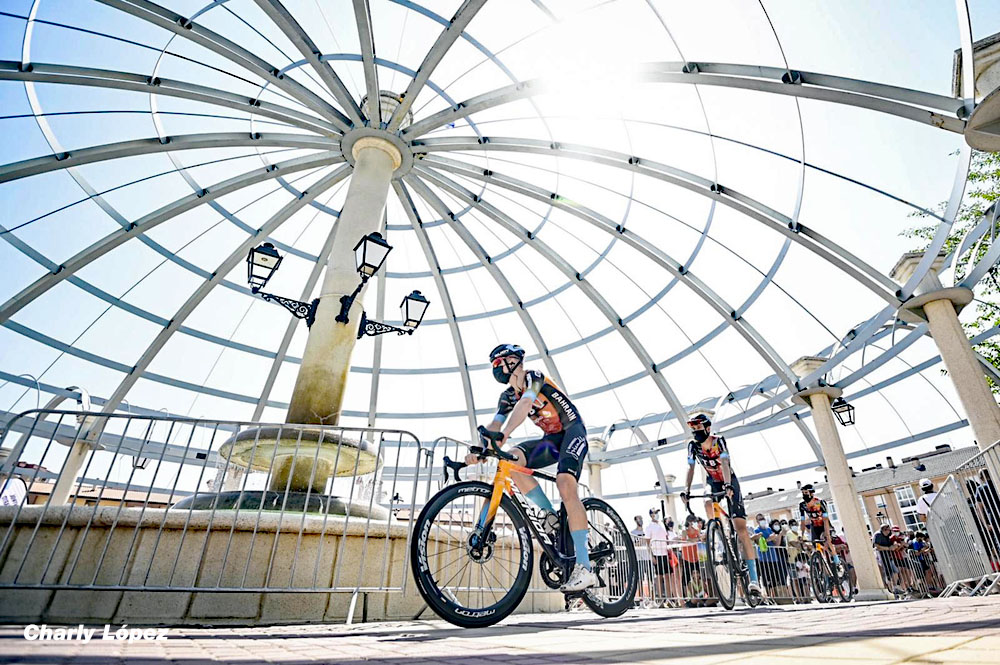 The sign-on in Tarancón 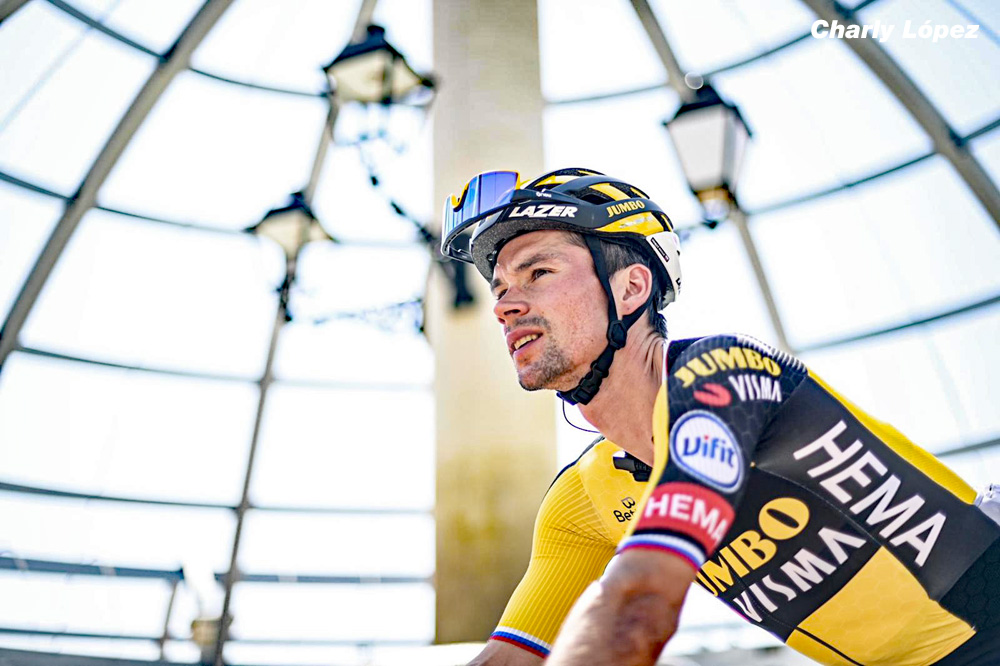 Primoz Roglič staying away from the overall lead

The fifth stage of 184.4 kilometres from Taracón to Albacete was made for the sprinters with only 600 metres of climbing. The only problems were going to be the wind and heat, but today was cooler than the previous stages. Fabio Jakobsen, Jasper Philipsen and Arnaud Démare were again the favourites for the stage win. 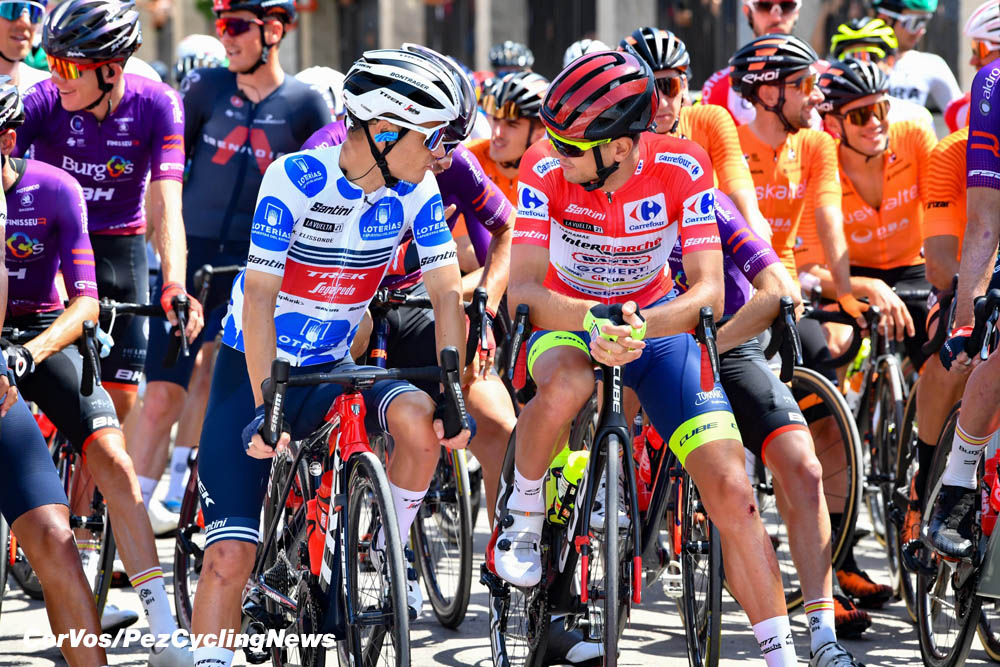 The jerseys at the start

Rein Taaramäe hadn’t suffered from his crash yesterday and was able to start in the red leader’s jersey. It didn’t take long for the ‘break of the day’ to form: Pelayo Sanchez (Burgos-BH), Oier Lazkano (Caja Rural-Seguros RGA) and Xabier Mikel Azparren (Euskaltel-Euskadi) went up the road. Sanchez was best on GC 10 minutes down on Taaramäe. 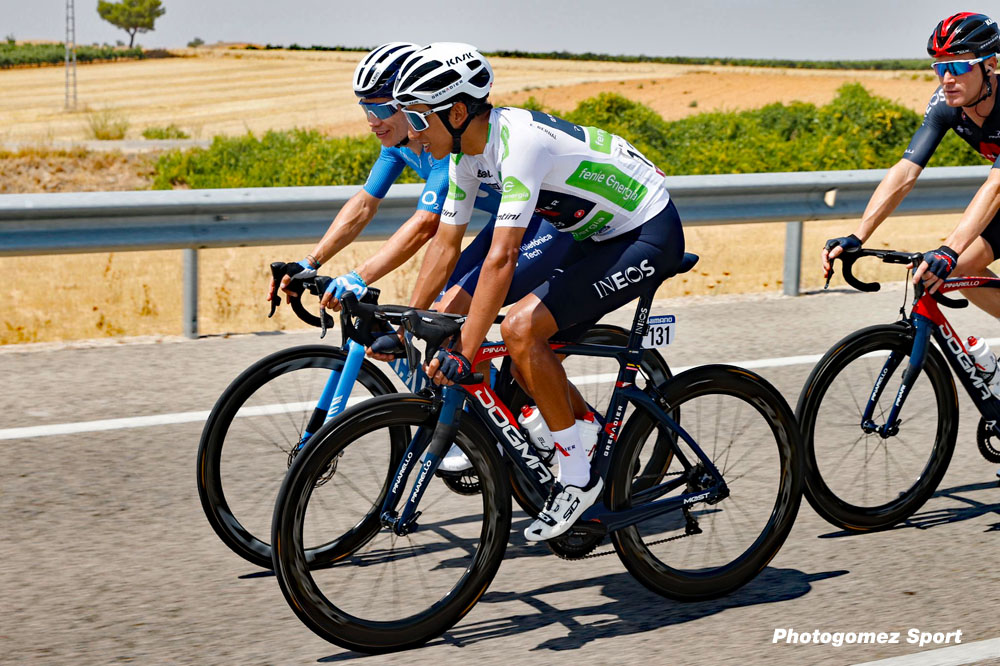 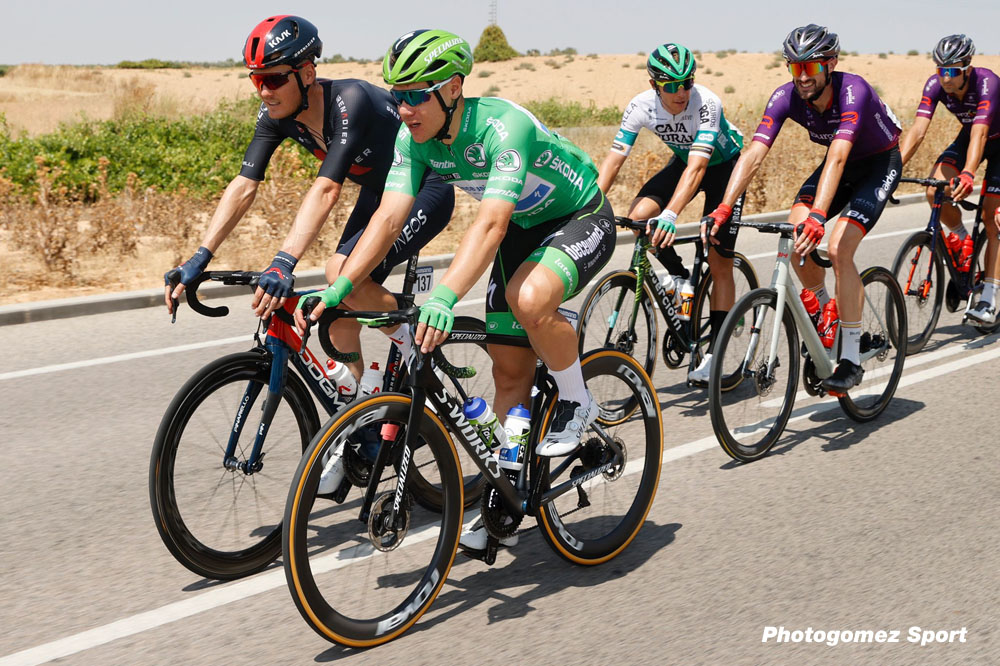 The escape managed a maximum lead of 7 minutes, with Intermarché-Wanty-Gobert keeping control of the lead for Taaramäe. Deceuninck – Quick-Step and Alpecin-Fenix ​​eventually started to help and the speed of the peloton lifted and the lead started to shrink. Groupama-FDJ also helped in the chase and by the halfway point the lead was down to 2 minutes. On the long straight roads the escape could be seen by the peloton and they eased off the pressure a little. 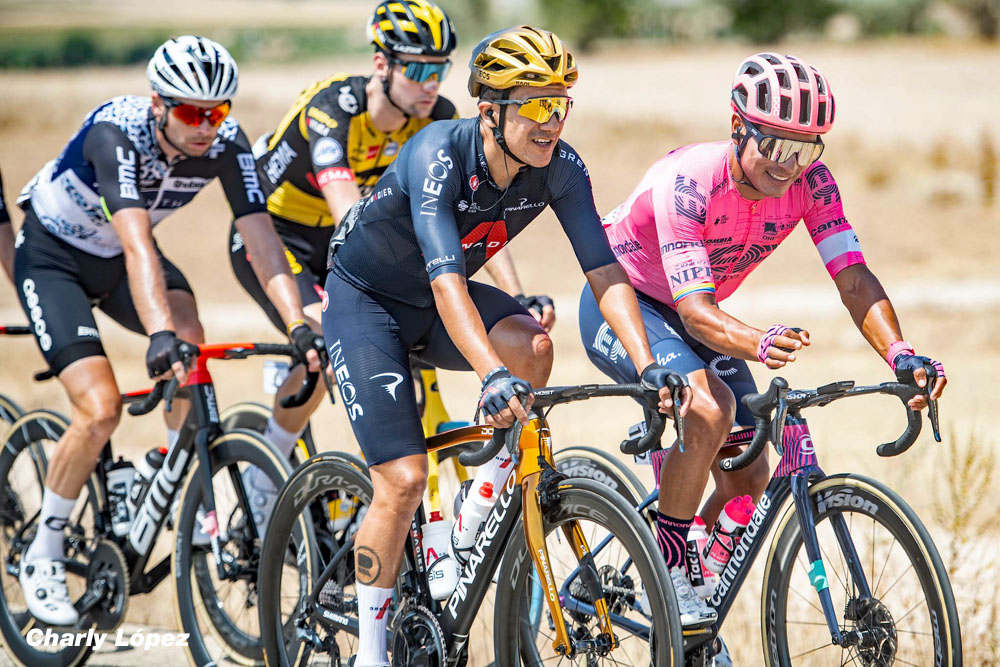 What can we expect from Chaves and Carapaz?

There was a real battle at the intermediate sprint in La Roda and it was Lazkano who was first ahead of Sanchez and Azparren. After 2 minutes the peloton, led by Groupama-FDJ and Alpecin-Fenix, ​​were ready for the fight. Philipsen was 4th and Démare 5th, taking 13 and 10 points for the green jersey. Jakobsen didn’t take part in the sprint. 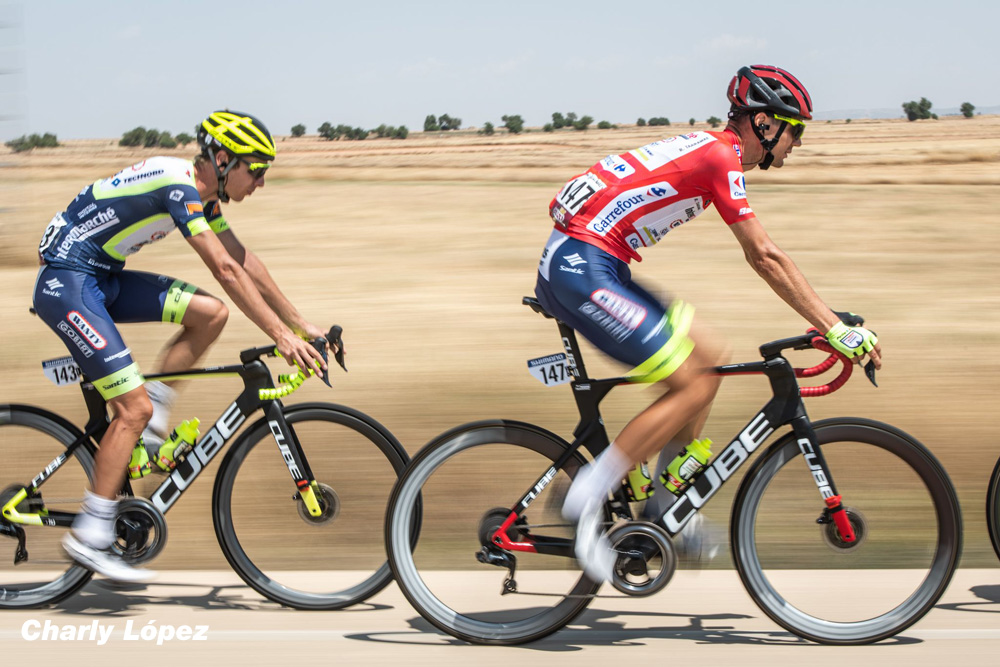 The teams of the GC riders started to come to the front in case of cross-winds, but, unlike previous years the problem didn’t arise. Sanchez was the first rider to be dropped from the break with 34 kilometres to go. The Burgos-BH rider had been in trouble for a while and had to leave them to it. Not long after, Azparren couldn’t hold on to Lazkano and sat-up with 21 kilometres to go. 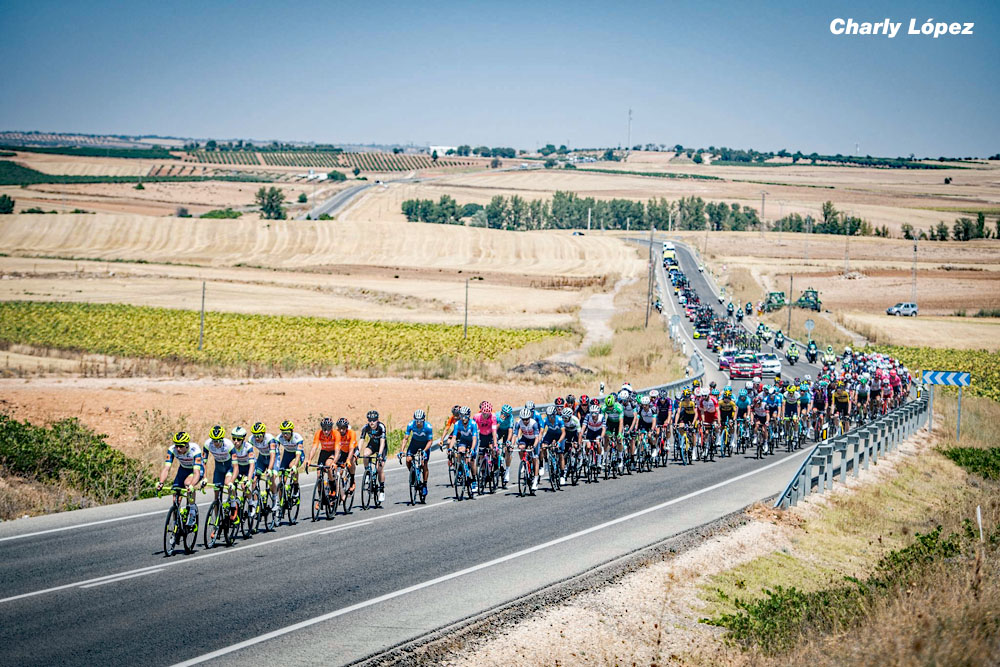 A long straight road to Albacete

Lazkano had 1:30 on the peloton, but with 15 kilometres from the finish he was caught. From then on it was up to the GC and sprinter’s teams to rule the road to the final. Less than 10 kilometres to go, there was a big crash in the middle of the peloton, causing a many riders to either hit the tarmac or be held back. 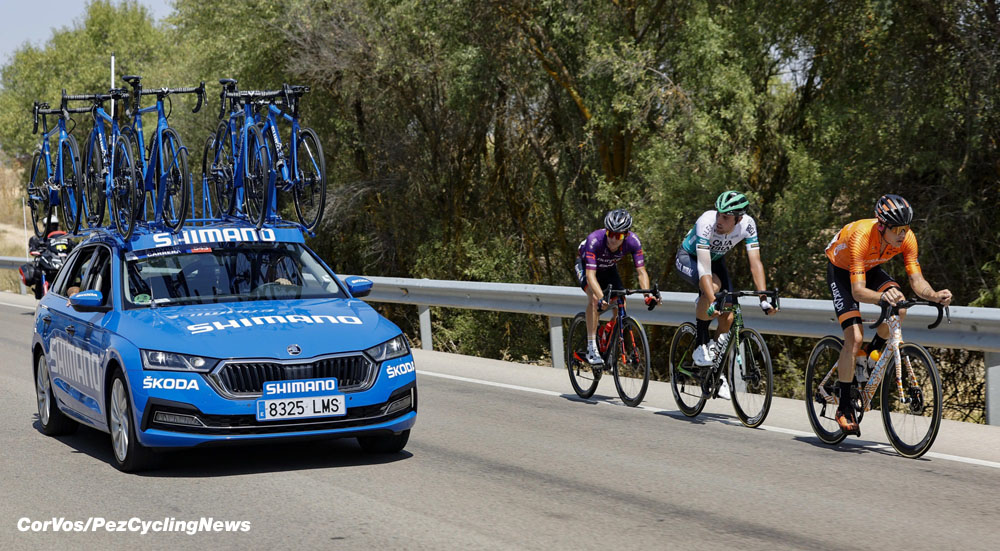 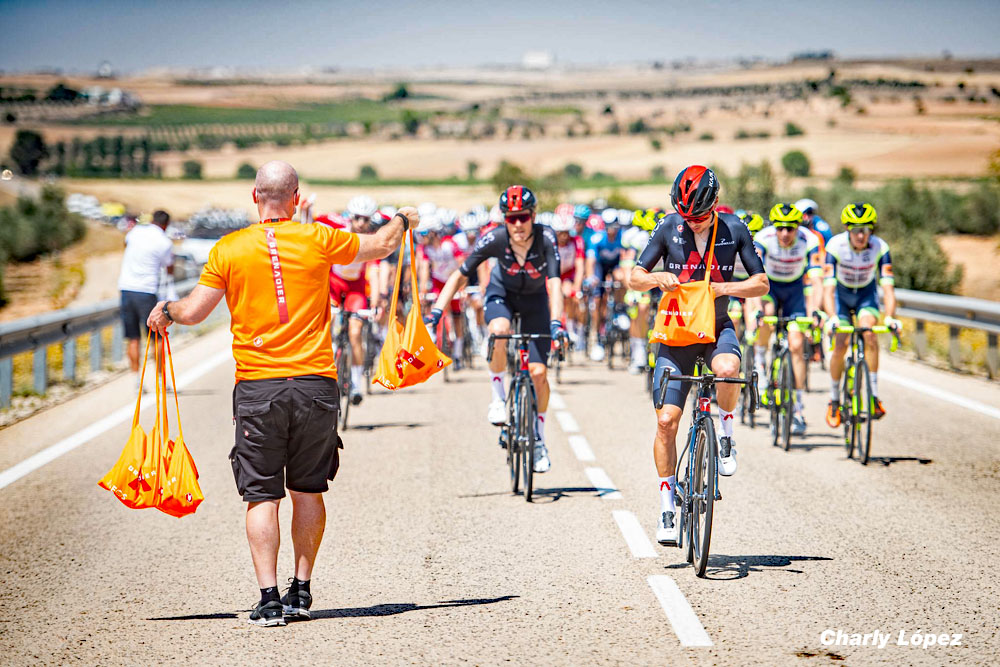 Mads Würtz Schmidt and Rein Taaramäe were among the riders involved. Romain Bardet was one of the worst affected, suffering severe abrasions on his back and Mikel Nieve had to be treated for cuts to the arm and face. The front group eased slightly, but Trek-Segafredo and the sprinter’s teams pushed on. Alpecin-Fenix ​​worked hard for Philipsen. 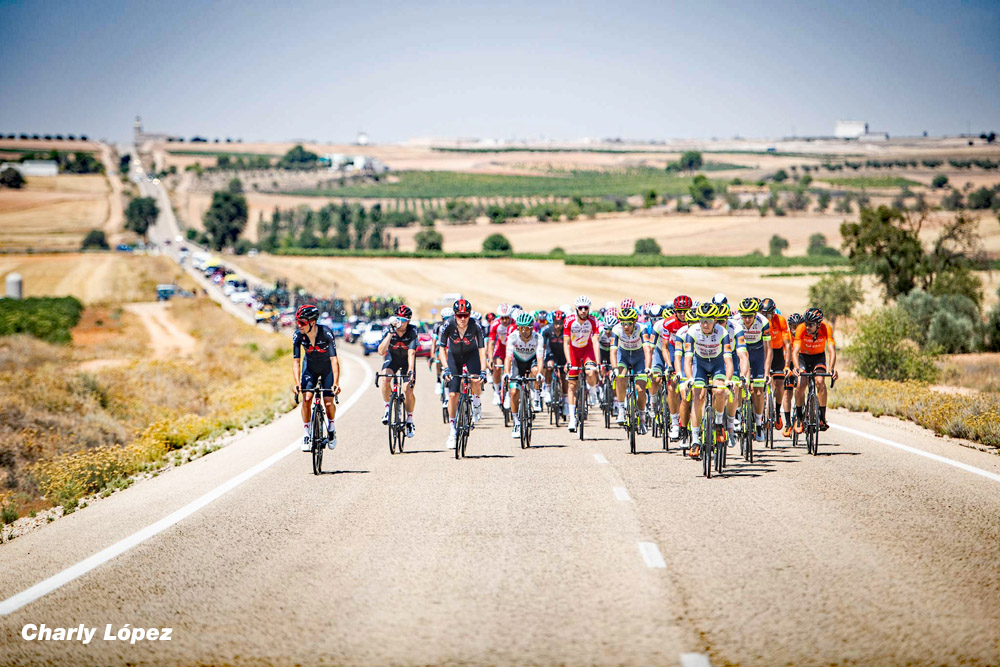 The chase was on, but not too fast 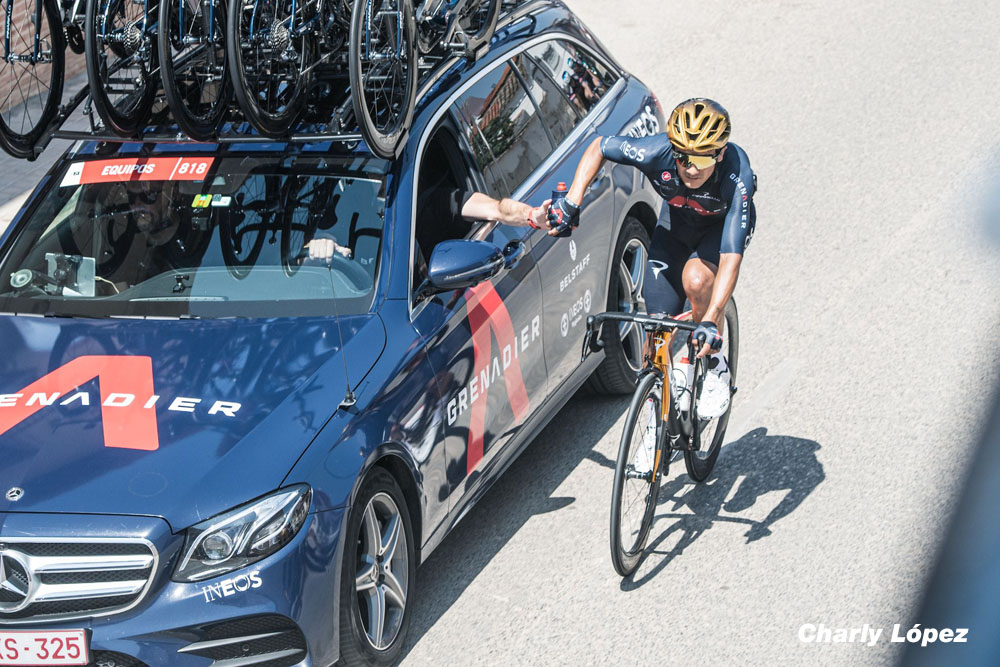 UAE Team Emirates led into the last kilometre as the Groupama-FDJ train worked its way forward. Alpecin-Fenix ​​again hit the front for Philipsen in the sprint finalé to leave Fabio Jakobsen and Alberto Dainese in his dust. Juan Sebastián Molano and Piet Allegaert were 44th and 5th. Philipsen is now the new leader of the points classification. Taaramäe crossed the line 2:20 minutes back and so Kenny Elissonde took over the red leader’s jersey. 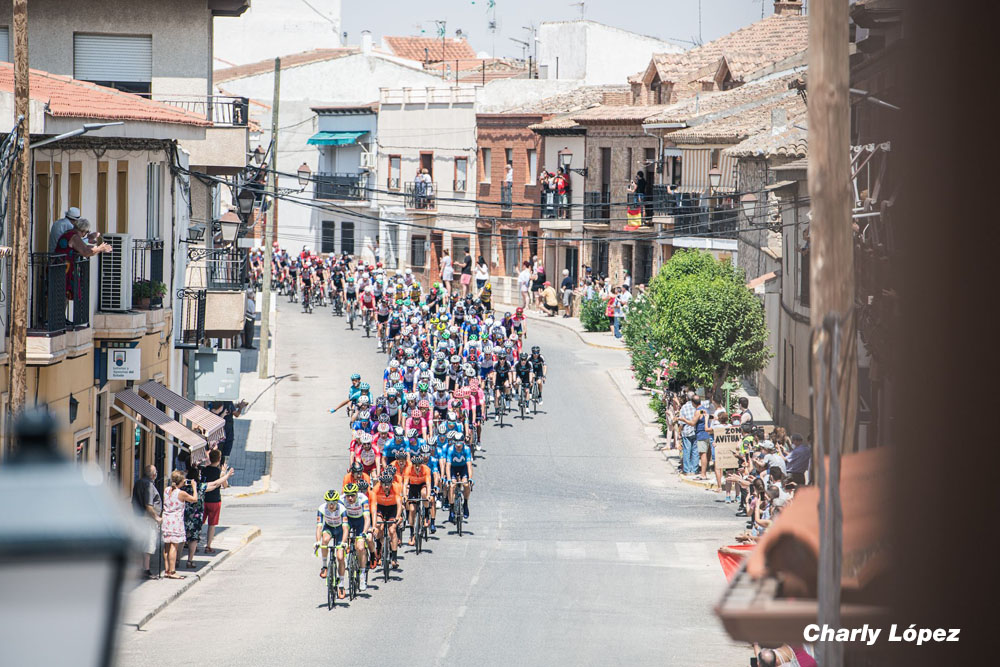 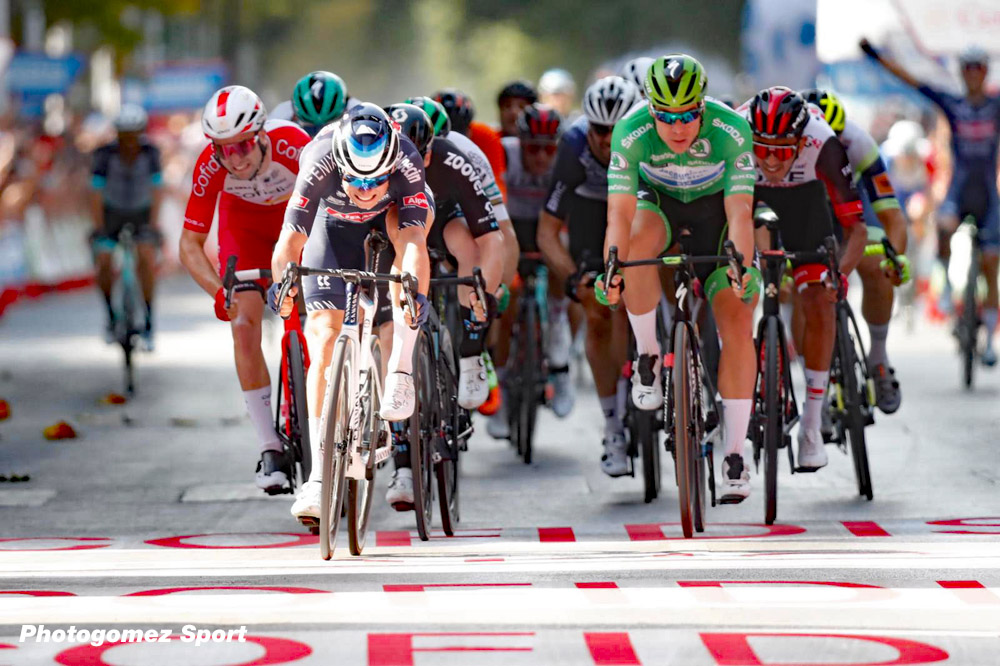 The sprint battle went to Philipsen ahead of Jakobsen

Stage winner and points leader, Jasper Philipsen (Alpecin-Fenix): “It’s even more beautiful [than stage 2] if you look at the final 5km. We were all up there with the team. I cannot describe that. It’s incredible what we all do for each other and it’s beautiful that we can finish it up together. Yesterday, I was a bit disappointed that I couldn’t do my sprint like we wanted. To win today is super nice to turn the page from yesterday. I’m not necessarily thinking about having the green jersey at the end of La Vuelta, but of course it’s super nice to try to wear it day by day and we’ll see how far we can go. It would be a dream [to win the next sprint with the green jersey]. Yesterday, it didn’t bring too much luck, so let’s hope it will work out in the next sprint.” 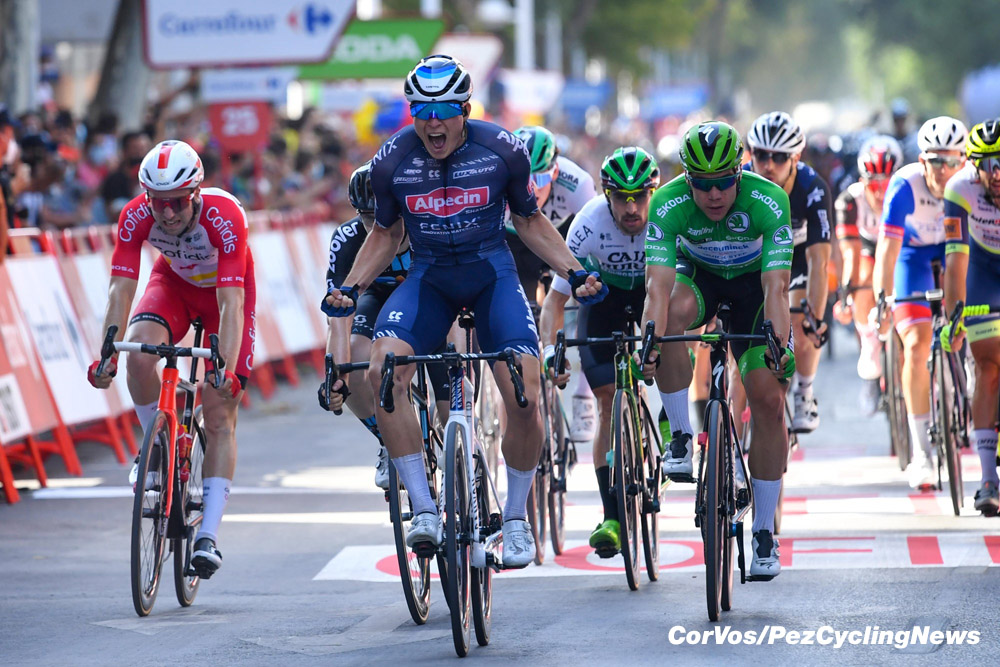 Stage and green jersey to Jasper

Overall leader, Kenny Elissonde (Trek-Segafredo): “I was in the top 10 positions when the crash happened so I did not see any of it. I was afraid that our leader Giulio Ciccone was not in our group. But he came back. This is not the way I wanted to take the jersey but we know that in cycling when there is wind, there is risk. You can lose everything in the echelons so you have to be vigilant. I don’t like the way it happened. It was not a pleasure. But at the end of the day there was nothing else I could do. It’s true that I’ve spent most of my career riding as a domestique. To have this jersey now is incredible. I have done the Tour de France and the Olympics. The team asked me if I could do La Vuelta as well. That’s the beauty of cycling: I’m here in the lead of a Grand Tour!” 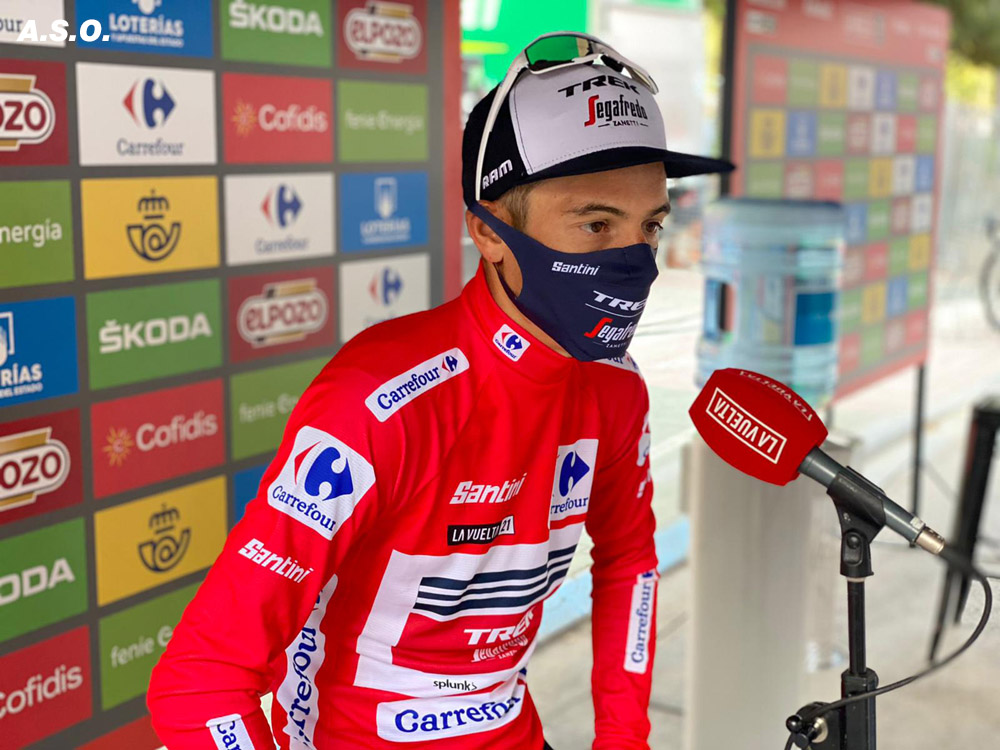