Primoz Roglič Back in the Red Jersey

Vuelta Stage Report: Many thought stage 6 would be dull, but the final 20 kilometres on narrow roads through the rice fields of Valencia was classic stuff, and this was before the sharp climb to the finish line. On the tough final kilometres, Magnus Cort Nielsen (EF Education-Nippo) managed to hold off Primoz Roglič (Jumbo-Visma) by a bike length for the stage win. Roglič is back in the overall lead.

The last K of stage 6

The sixth stage in the Vuelta a España, finishing on the summit of the Alto de la Montaña de Cullera, went to Magnus Cort Nielsen. The Dane was part of the ‘break of the day’, and as he was about to be caught by Primoz Roglič, he held off Slovenian with a last big effort.

Technical director, Fernando Escartín: “The finale is located high up on a hill where the Cullera Castle is found. The final 1.5 km are uphill, which will make it particularly difficult for sprinters. The stage will be quick and full of uncertainty. It will provide the ideal conditions for breakaways or for a rouleur who has the support of his team to control the stage.” 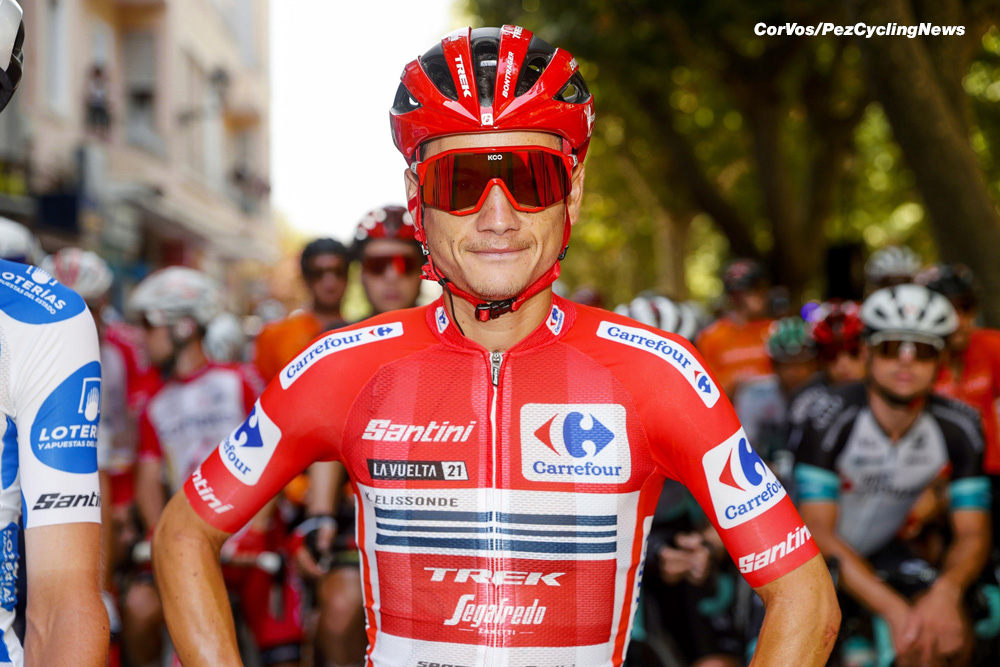 Stage 6 had a nasty finalé with a finish at the summit of the Alto de la Montaña de Cullera. The final climb has an average gradient of 9.2% and ramps of up to 12%, over a distance of 1.9 kilometres. 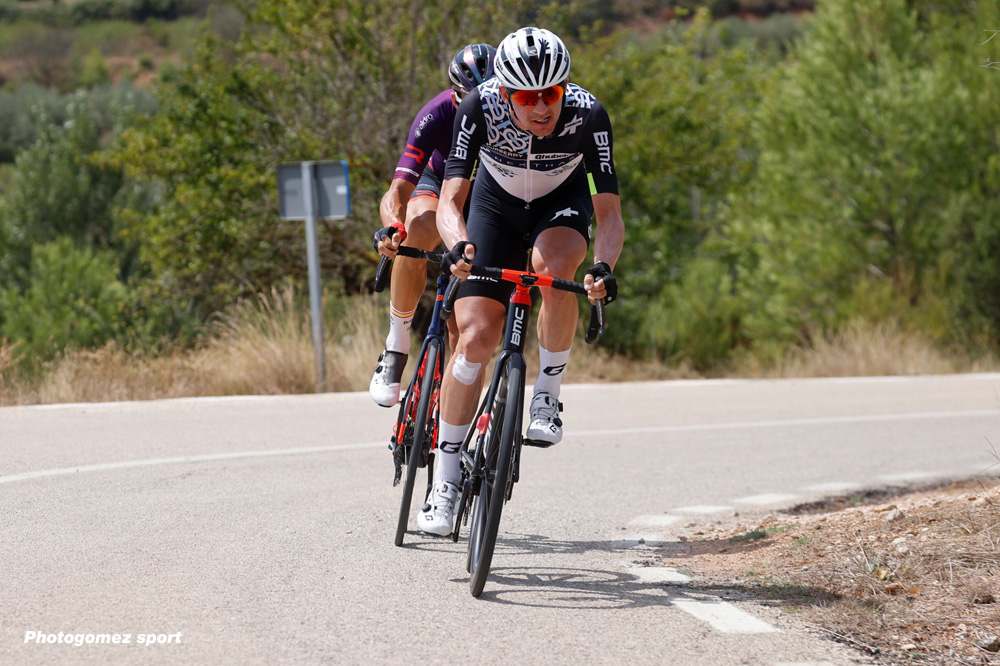 The break took time to form

The race was full on from the start and this caused a big crash in the peloton. Riders from Movistar, Alpecin-Fenix ​​and Astana-Premier Tech hit the deck, but all were able to continue after a little delay. Several riders tried to set up an early break, but no one was allowed to stay away. 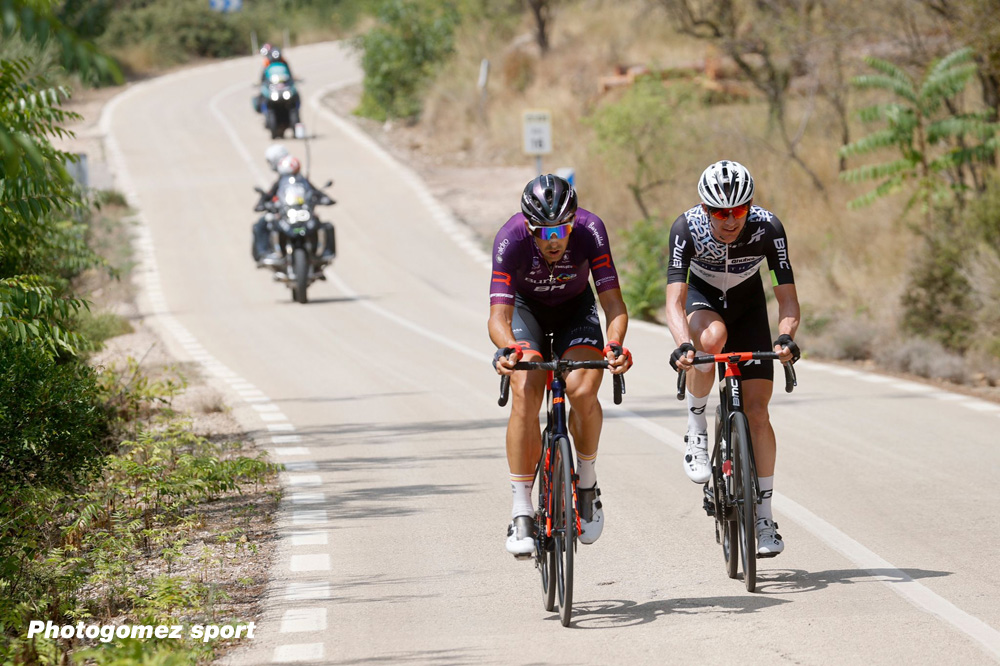 Florian Sénéchal tried a move after 30 kilometres. The Frenchman managed to lead the pack by 30 seconds Stan Dewulf, Jonathan Lastra, Antonio Jesús Soto, Andreas Kron, Michael Storer, Sergio Luis Henao and Matteo Trentin counter-attacked. The peloton did not give up and the attackers were caught again after a fast pursuit. At 120 kilometres from the finish the race was all together. 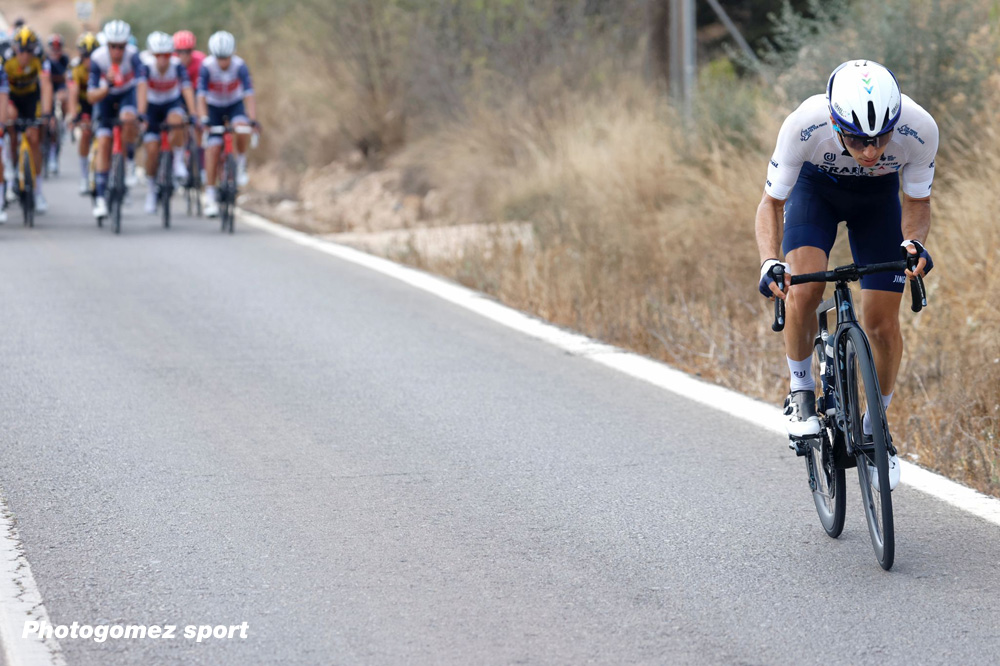 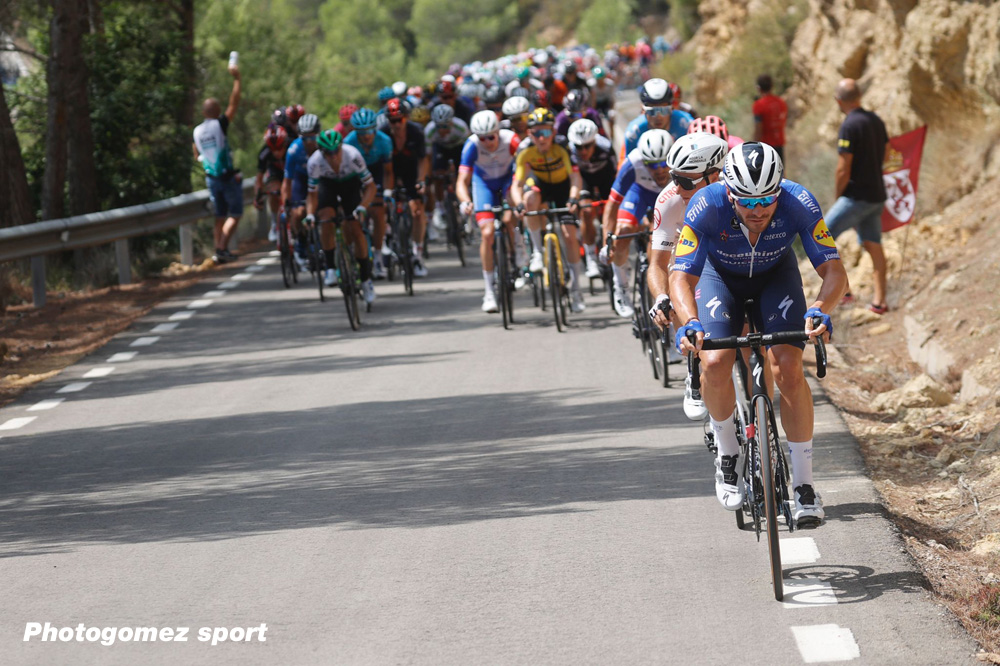 These five riders were the ‘break of the day’. Behind; Guy Niv of the Israel Start-Up Nation tried to cross alone. His idea didn’t work out and he had to sit up and wait for the peloton. The lead rose to more than 7 minutes and BikeExchange started to chase. 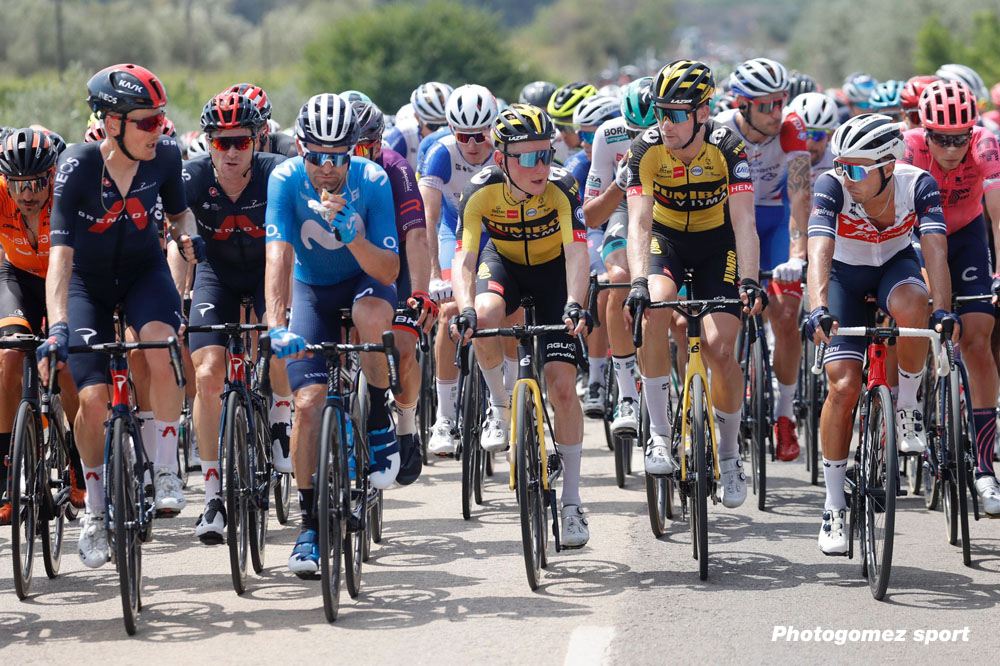 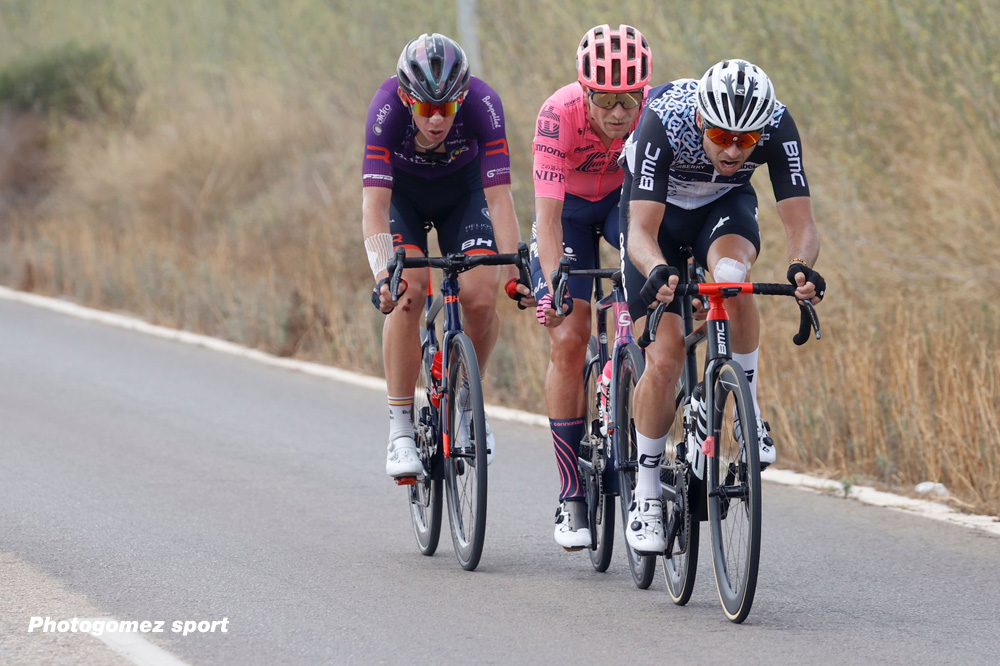 The Australian team wanted the stage win with Michael Matthews and so took control. Due to the hard work of Robert Stannard and Damien Howson, the escape was losing time. With 70 kilometres to go the difference was reduced to 5 minutes. Further down the coast the wind lifted causing some chaos in the peloton. 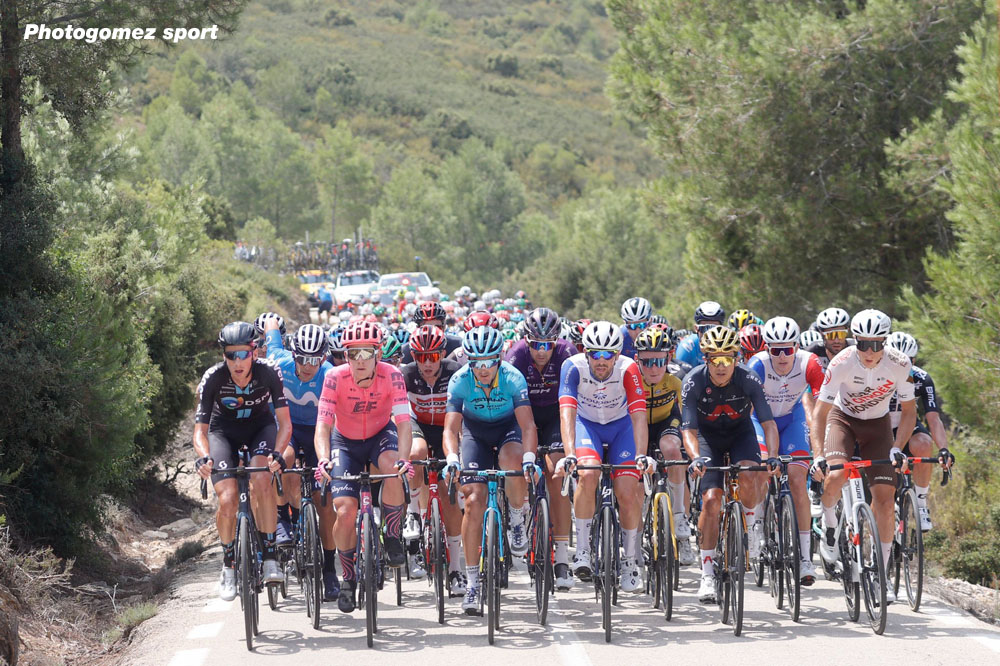 The peloton let them go

At 50 kilometres from the finish a Alpecin-Fenix ​​rider crashed, taking Andrey Zeits (BikeExchange) with him. Due to the loss of Zeits, the Australian team stopped their chase, so that the breakaway’s lead continued to fluctuate around 3 minutes. The peloton mainly looked at each other, but that was not for long. 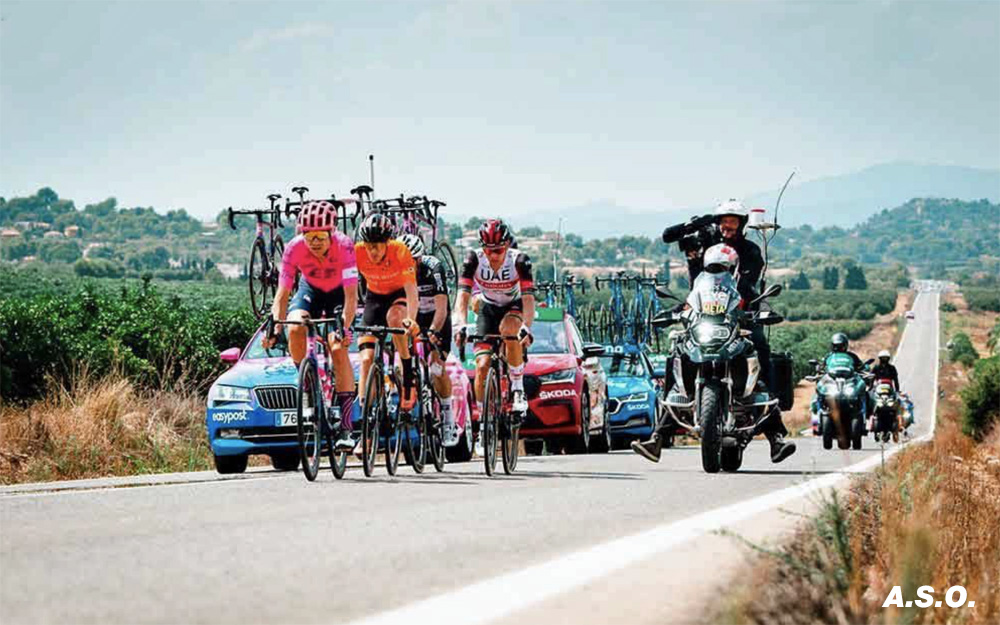 With more than 30 kilometres to go, the route became more exposed to the cross-wind and this turned out to be the time for Movistar, Jumbo-Visma and INEOS Grenadiers to put the peloton under pressure. Most GC riders were ready and managed to survive the first selection, but for Elissonde it was too fast. The red jersey wearer was dropped from the first echelon and was passed by several groups. Eventually there was some calmness. 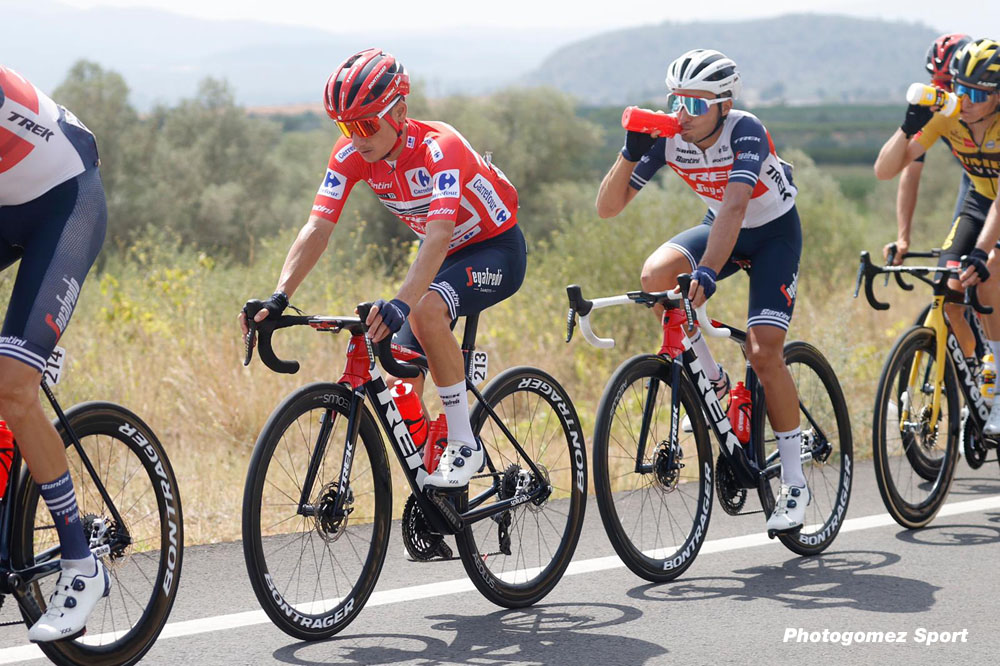 Elissonde was not on a good day

In the last 20 kilometres the wind wasn’t favourable for echelons and so it was a thinned out peloton that started the last 10 kilometres. The five escapees continued to ride well together, hoping to stay out of the peloton’s grip, but Movistar clearly had a different plan. The Spanish team really wanted to win the stage with one of their leaders and rode at full gas at the head of the group. 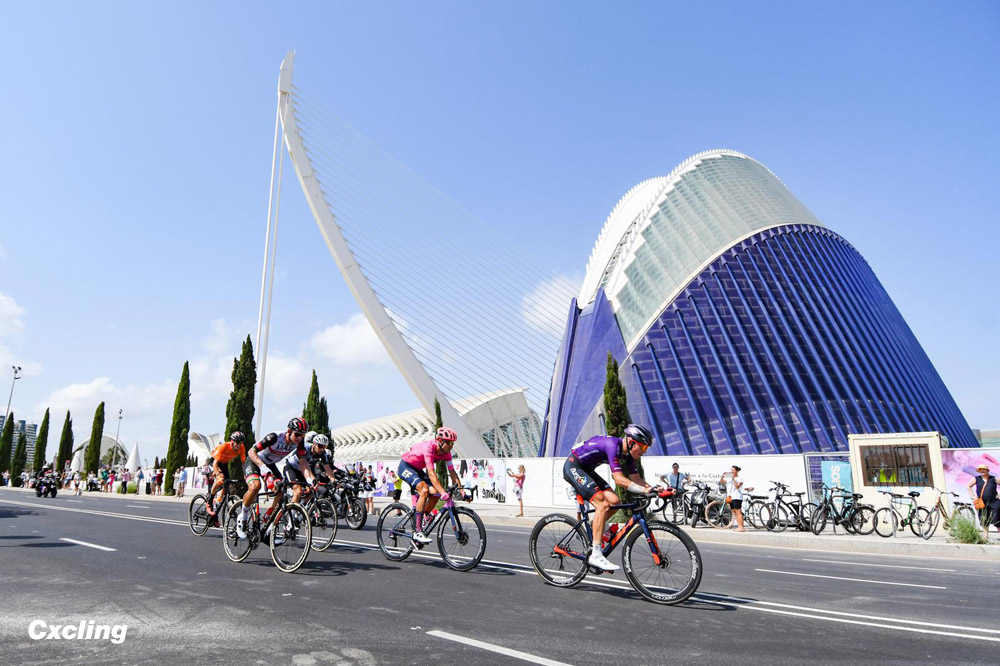 Could the break stay away?

Just before the last 10 kilometres the wind picked up again and that caused another split in the peloton. The biggest casualty was Hugh Carthy, last year’s runner-up, he was lucky enough to get back to the main group with four of his teammates. The five leaders still had a 1 minute lead, with just 8 kilometres to go. It seemed to be all over for the break, especially since Movistar had no intention of slowing down. 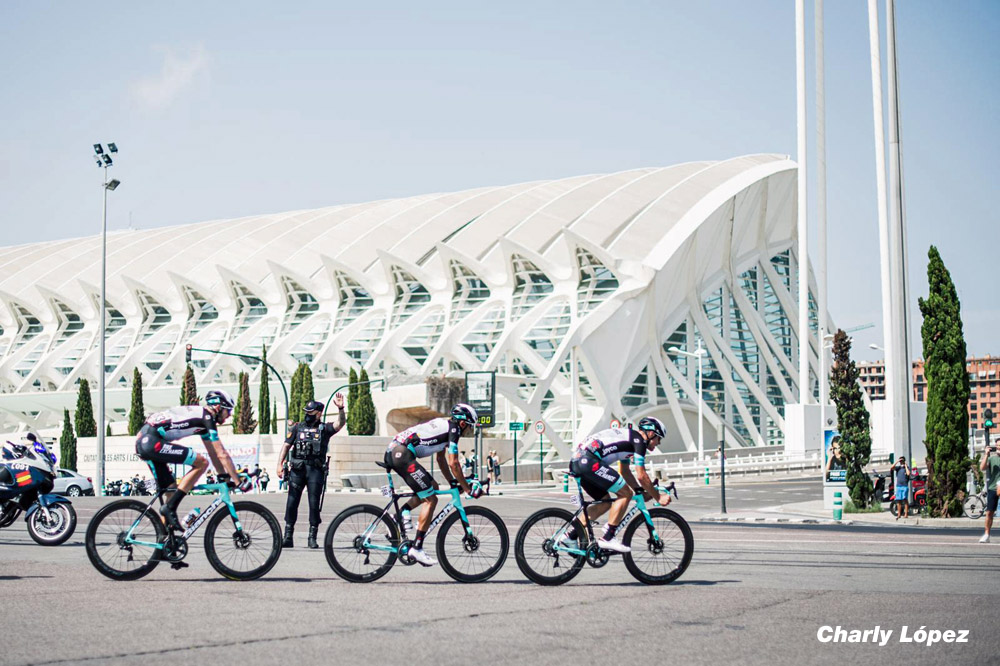 The peloton through Valencia

The difference between Bol, Lindeman, Cort, Bou and Gibbons and the peloton was still 20 seconds at the foot of the Alto de la Montaña de Cullera, but due to an impressive chase ride by Dylan van Baarle everything was still to play for on the almost 2 kilometre long final climb. Next it was Narvaéz to lead-out Carapaz and Bernal on the climb. The group of favourites exploded completely and Elissonde was gone. 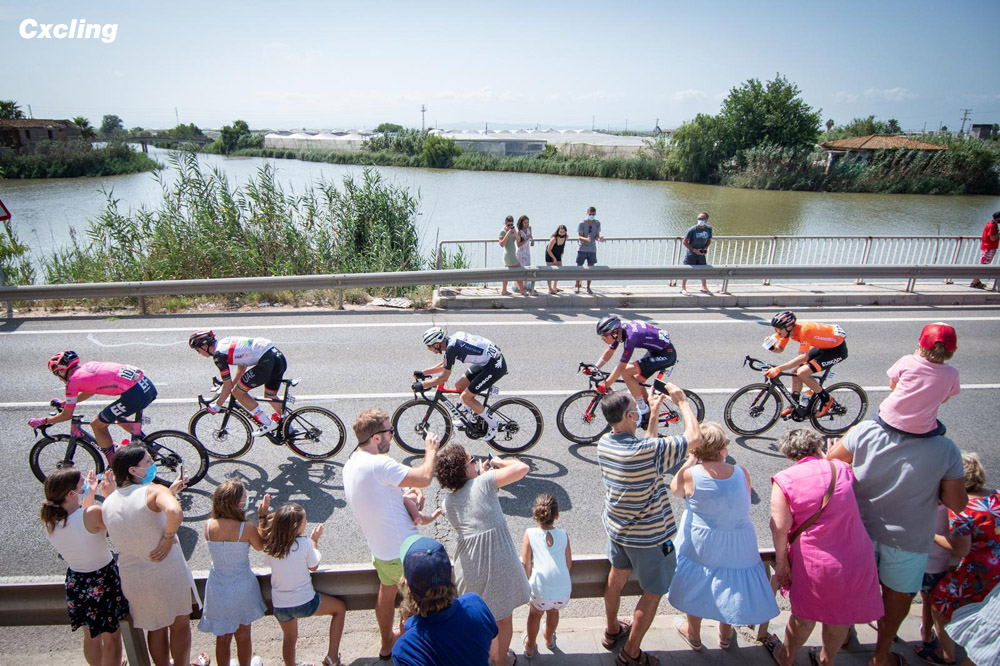 The break plodded on, but it was chaos in the peloton

At the front, Cort dropped Lindeman, but the favourites had the Dane in their sights. Nevertheless, the EF Education-Nippo rider had a good gap for the last 500 metres and still had a chance for victory. Roglič started his final move and Cort looked to be cooked. The Slovenian shot forward towards Cort’s rear wheel, but was just too late in the twisty final. 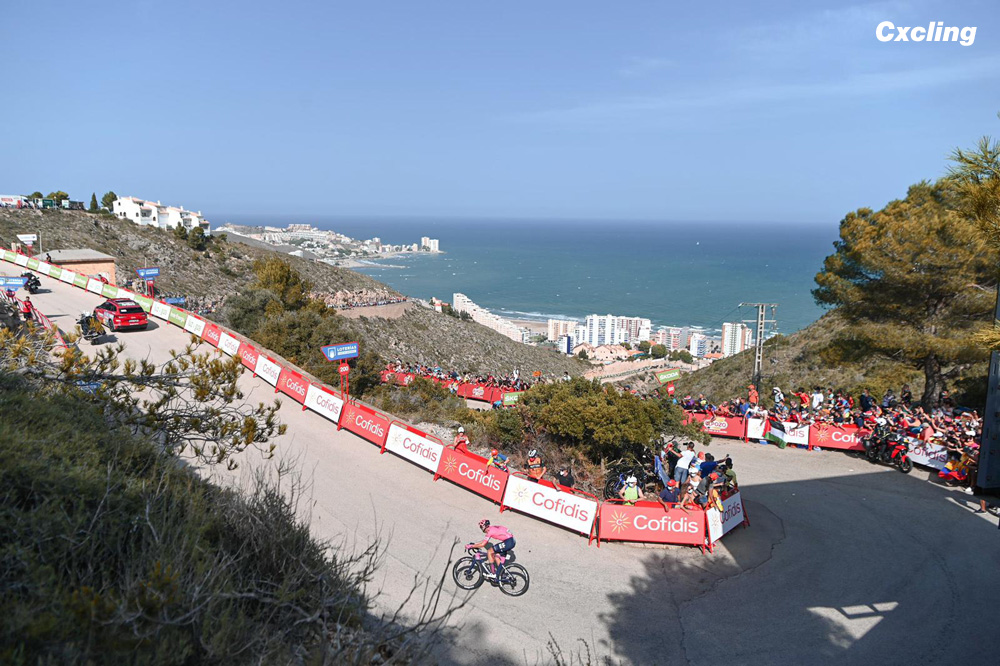 Cort was able to take his fourth stage victory in the Vuelta and Roglic with his second place is now again in the red jersey and is 25 seconds ahead of Enric Mas on GC. Miguel Ángel López is 3rd at 36 seconds. Alejandro Valverde and Egan Bernal complete the top 5. 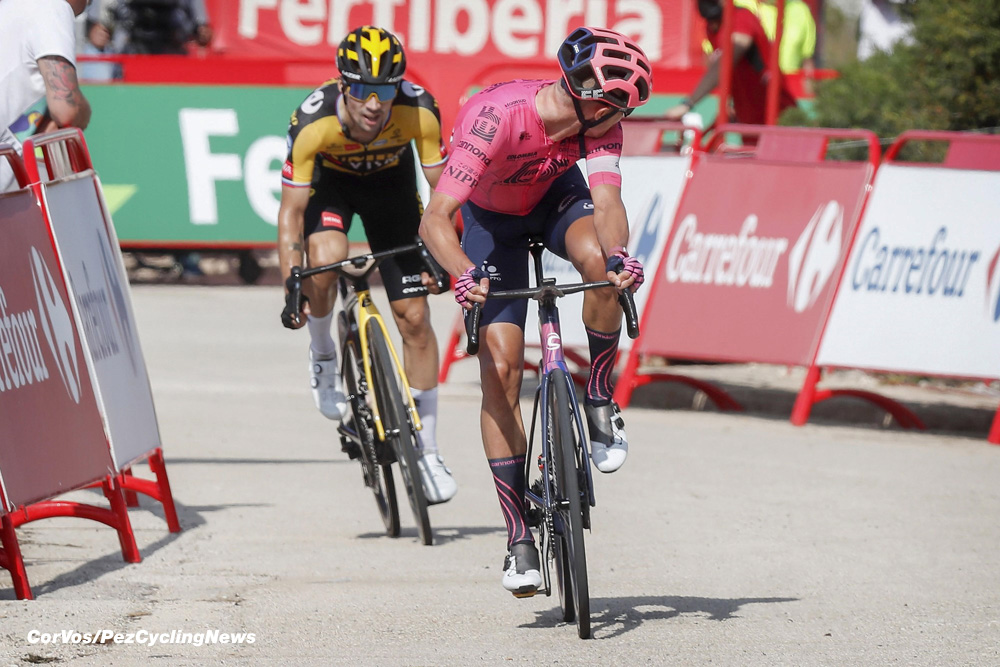 Cort had just enough time to make sure he won

Stage winner, Magnus Cort Nielsen (EF Education-Nippo): “This victory is special for me because it’s a very different way. The last stages I won were from bunch sprints. I’m very happy to show that I can also do it on a lot of terrains and from a breakaway finishing up a hill like this today. It was hard to know exactly if I had a chance to win and how big the gap was. The bunch went fast before the climb for GC riders to take position. I could see we still had a little gap and for me it was just about going to the finish as fast as I could. I was hoping that none of my breakaway companions would stay in the wheels. I watched behind me. It was very close at the end. I’m very happy that I kept Roglic behind. About 150 metres to go I could see him coming. I sprinted with everything I had. Luckily I could keep him behind me.” 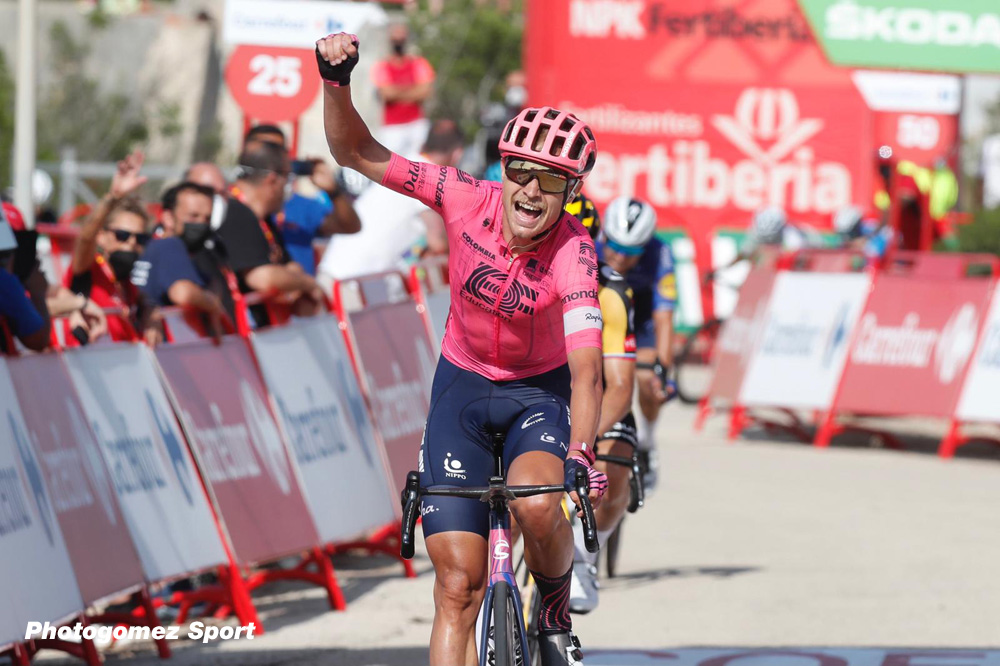 It was close, but Cort took it

Overall leader and 2nd on the stage, Primoz Roglic (Jumbo-Visma): “No, I’m not disappointed at all. Magnus [Cort Nielsen] was stronger. He had very good legs and he definitely deserved the win. As for myself, it was not so much about the win. First of all, I wanted to stay safe, out of trouble and then try to enjoy this climb. At the end, I had good legs, I did a little sprint. [To have La Roja again], these are sweet worries! We’ll see who will be the strongest in Santiago. It’s still a long way. This is the start and we try to keep the focus and do our job.” 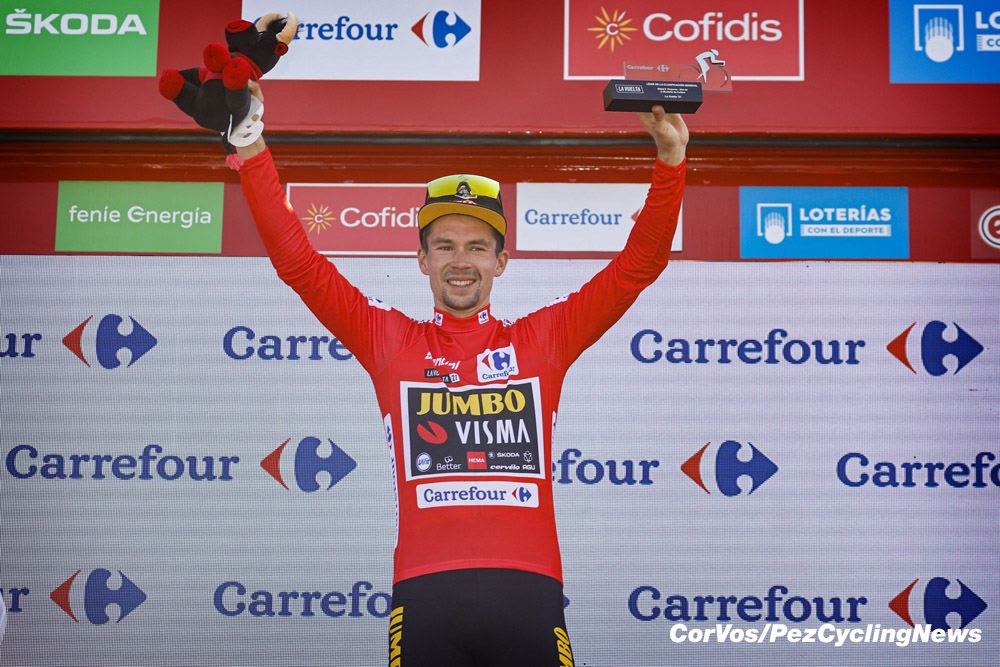 Back in red for Roglič