Vuelta Stage Report: A fast start to the day didn’t settle down until Alejandro Valverde spectacularly crashed out of la Vuelta, but by that time the race was split to ribbons. Michael Storer (DSM) and Carlos Verona (Movistar) fought for the victory on the Balcón de Alicante with the Australian taking the win. Primoz Roglič (Jumbo-Visma) finished just in time to save his overall lead by 8 seconds from Felix Großschartner (BORA-hansgrohe).

Michael Storer won the seventh stage of the Vuelta a España. On the climb of Balcón de Alicante, the Australian DSM rider pulled away from Pavel Sivakov, Andreas Kron and Carlos Verona, the left-overs of the early break. 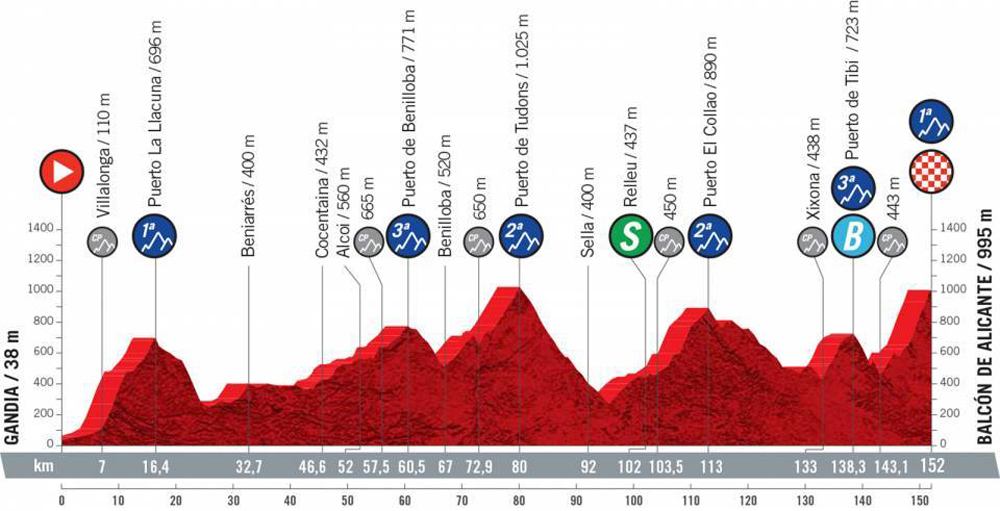 Technical director, Fernando Escartín: “First true mountain stage. Six mountain passes, including two 1st category climbs, will test the peloton. A very tough day, with a constant up and down motion, almost without respite, ideal for the favourites to bare their teeth.” 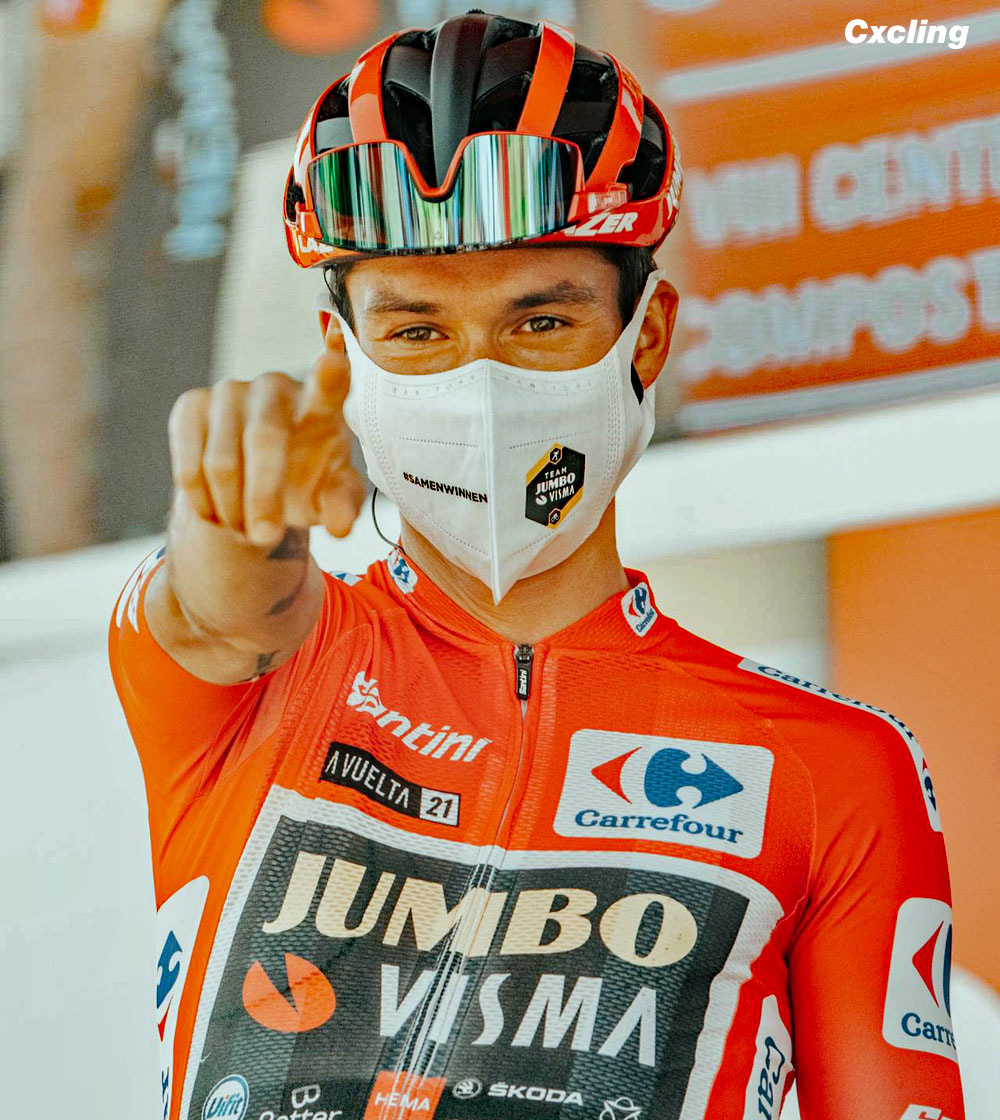 Primoz Roglič back in red this morning

The seventh stage was the first serious mountain battle of the 2021 Vuelta. The stage was 152 kilometres from Gandía to the summit finish on the Balcón de Alicante. The riders first had to climb the Altos of La Llacuna, Benilloba, Tudons, El Collao and Tibi. After 143 kilometres the last climb of the day started to Balcón de Alicante (8.4km at 6.2%). The second part of the climb had gradients of between 8.5% and 14%. 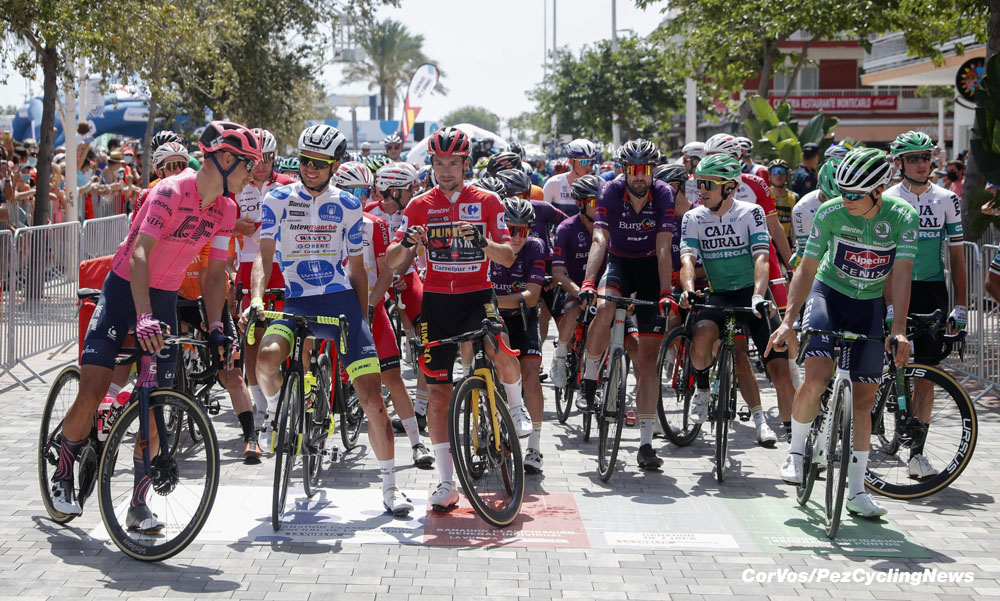 The jerseys at the start in Gandia

From the start the road went straight up to Puerto La Llacuna and the race was on almost immediately. One attack followed another in rapid succession, but it took more than an hour before the big break was formed: Geoffrey Bouchard (AG2R Citroën), Diego Camargo (EF Education-Nippo) and Harm Vanhoucke (Lotto Soudal) joined forces with DSM riders Thymen Arensman, Chris Hamilton and Michael Storer. A large group, including Sepp Kuss, Pavel Sivakov and Jack Haig, gave chase. 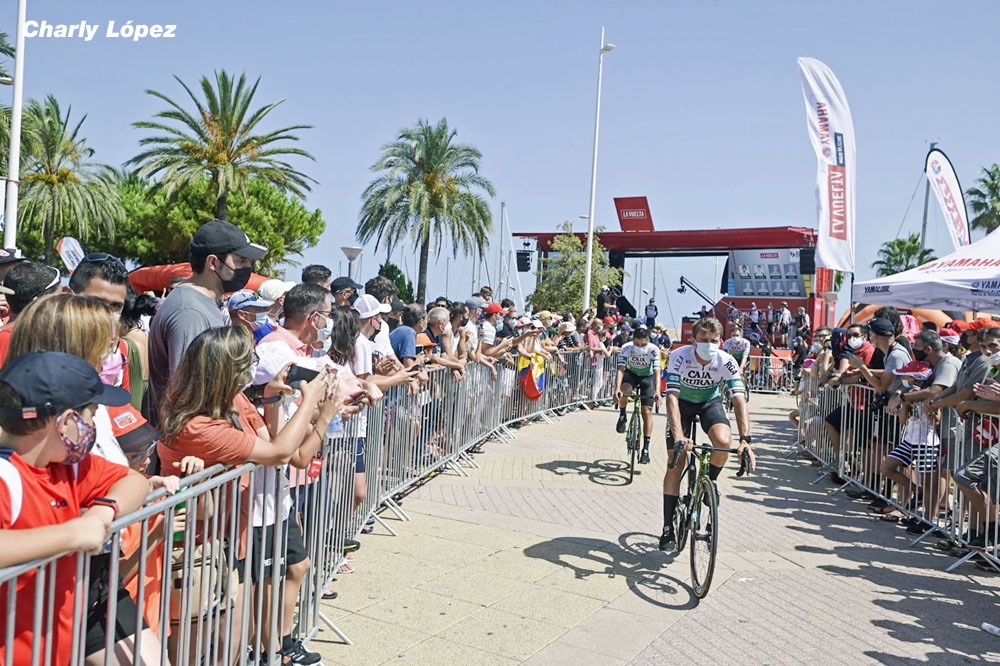 The beach was empty as everyone was at the start 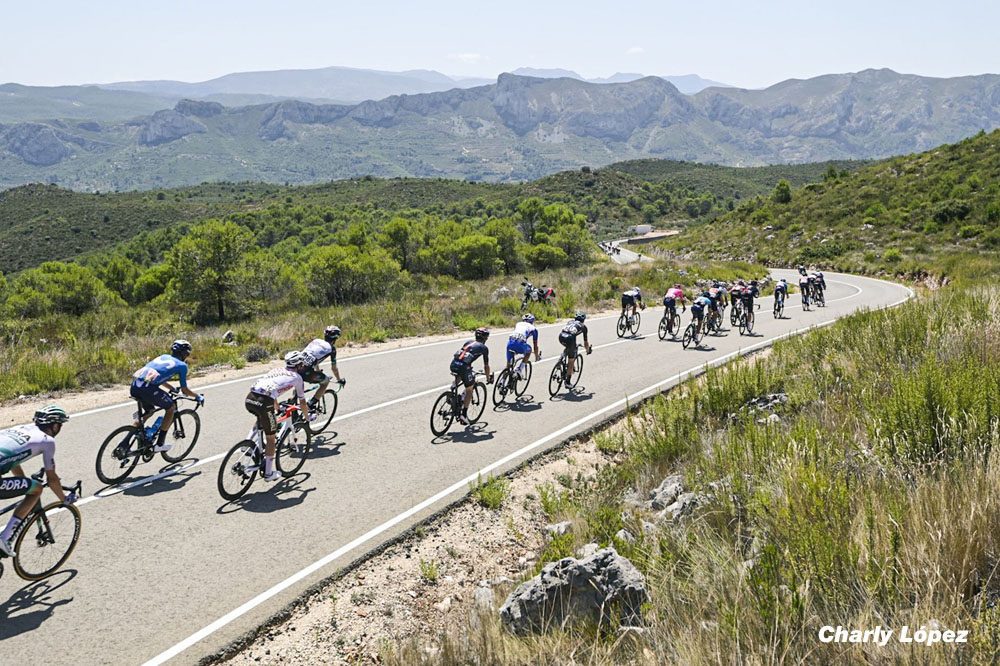 The action came from the gun 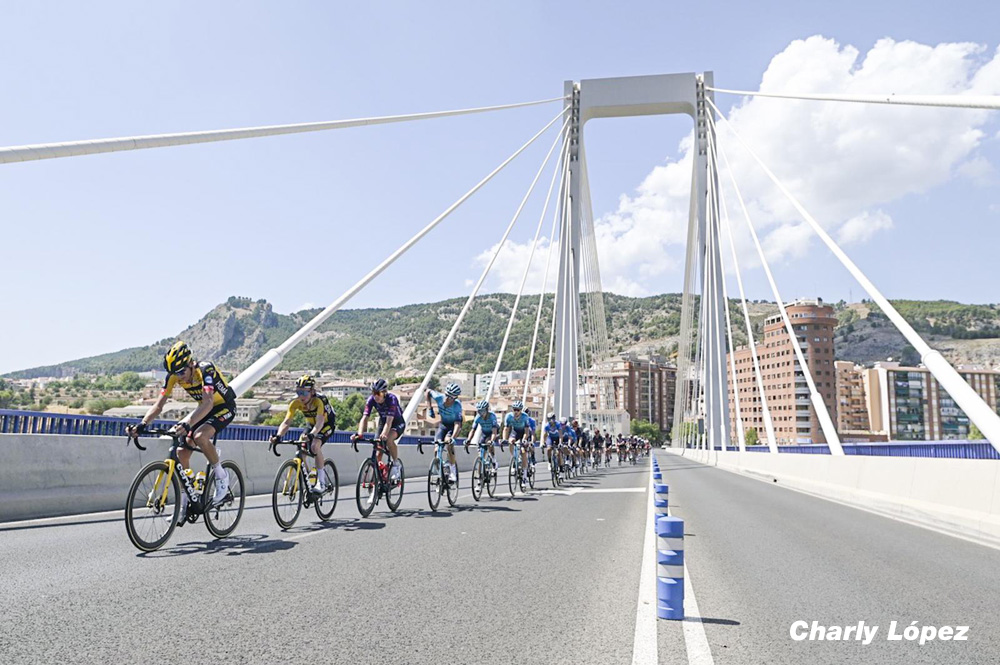 The race was well split by the town of Alcoi

In the end, a leading group of 29 riders was formed, with Jan Polanc being the best rider in GC in 12th place, at 1:42 from Primož Roglič. Sam Oomen was also part of the group, but the Dutch climber waited to his leader Roglič. The escapees had more than 4 minutes on Benilloba and Tudons. Hugh Carthy, who was in trouble yesterday, couldn’t hold on and abandoned. 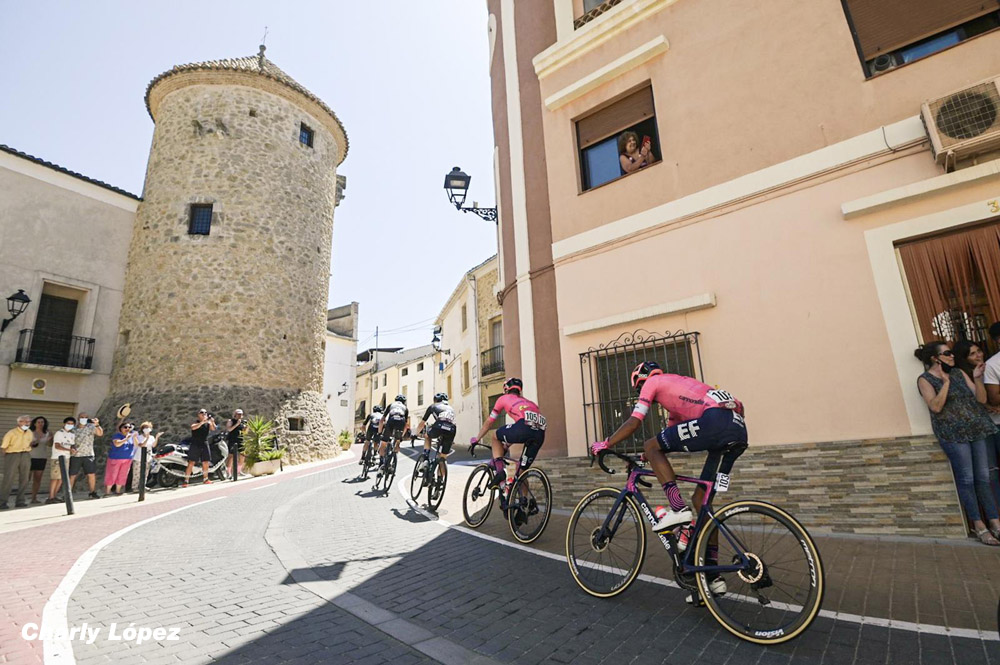 There were many groups on the road 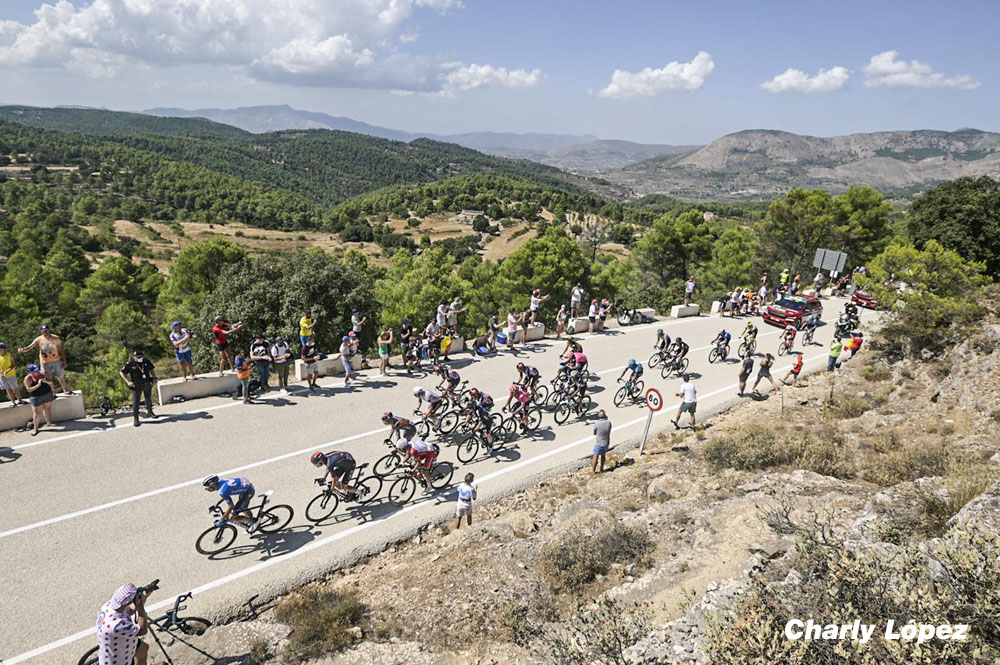 The climb of the Aitana calmed the race a little

In the run-up to the El Collao, the fourth climb of the day, Bouchard, Lastra and Arensman broke away from the leading group. Bardet wanted to further thin out the leading group on the climb and attacked, as did his teammates Hamilton and Storer. Most of the escapees were able to follow the pace, but Aranburu couldn’t. On El Collao, Movistar put the pressure on in the peloton. José Joaquín Rojas accelerated with Alejandro Valverde on his wheel. INEOS with Richard Carapaz and Adam Yates, along with David De la Cruz responded. 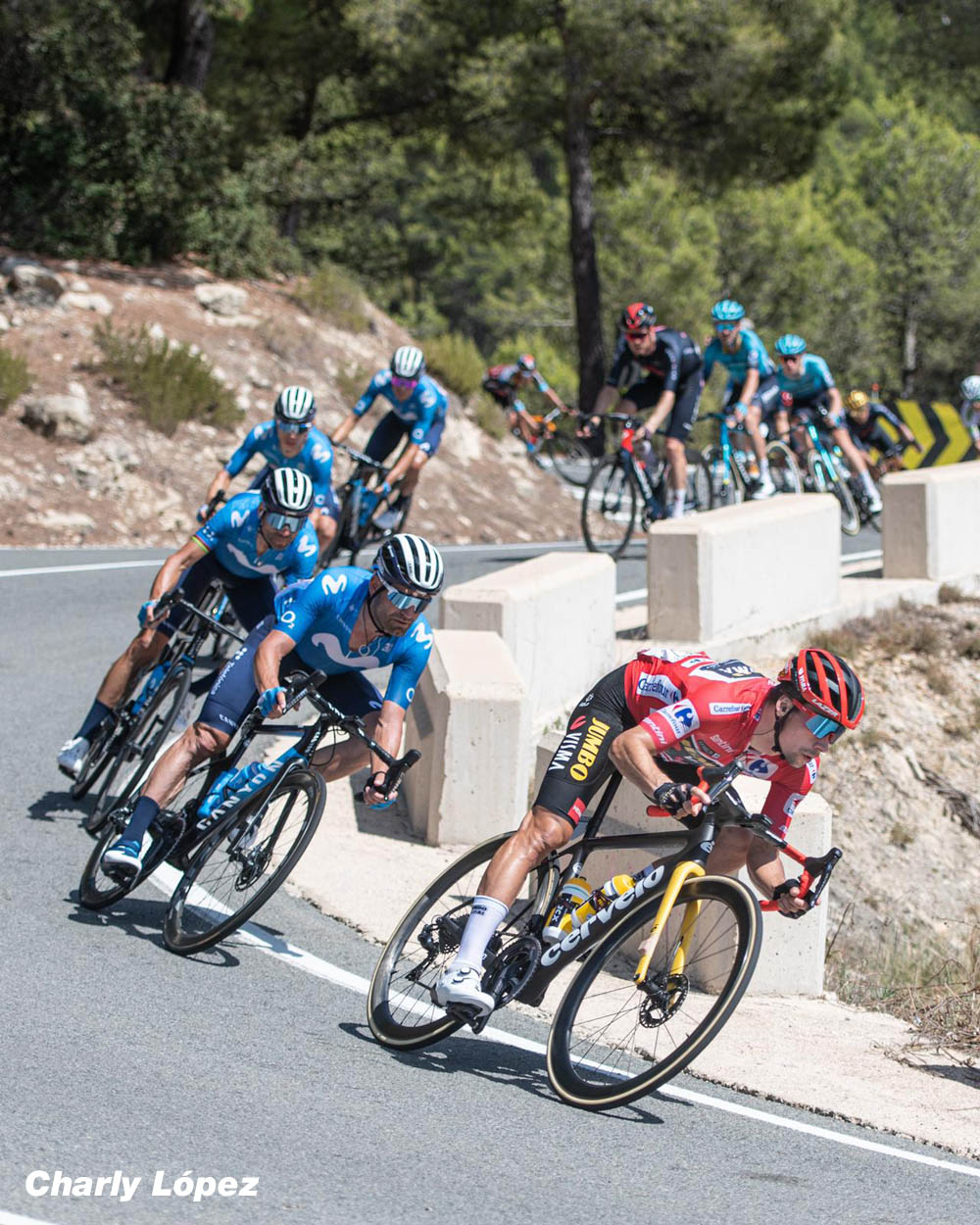 It turned out to be Valverde’s last move in this Vuelta, after his attack the Spanish rider crashed hard, going under the barrier and nearly down a ravine. He eventually tried to ride on, but had to give up. Miguel Ángel López, Carapaz and Roglič tested the opposition, but the GC riders came together over the top of the El Collao. Craddock rode away from the leading group. The American had a nice gap, but Sivakov and Storer managed to join him. They had 55 seconds on the others of the break in the last 20 kilometres. 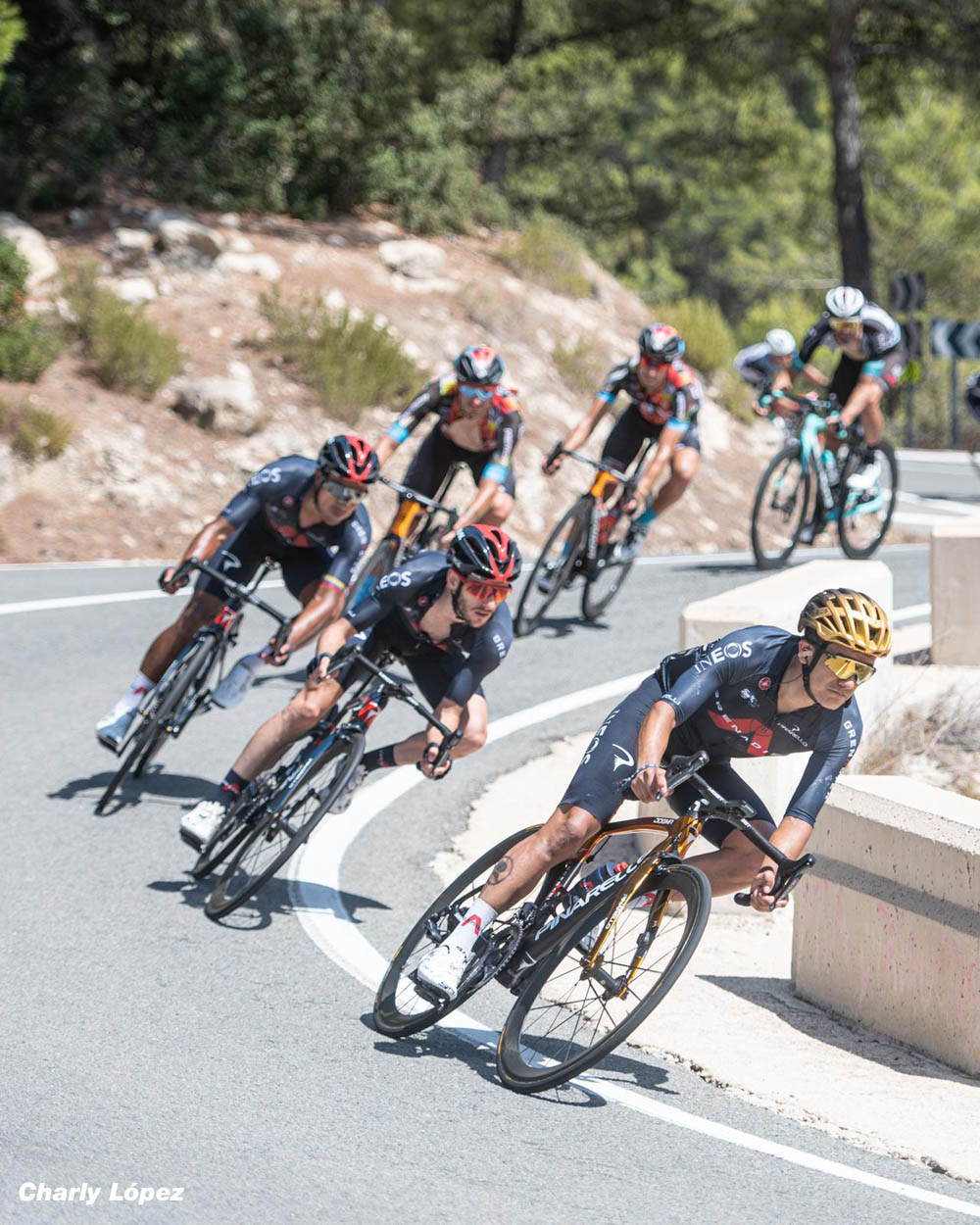 Maybe a better day for Carapaz

On the Puerto de Tibi, Sivakov and Storer dropped Craddock. Sivakov was the first across the top and took the lead in the KOM classification. On the climb to Balcón de Alicante there was still a lot of points to be earned. With a handful of seconds on Craddock and 30 seconds on the first chasing group, Sivakov and Storer took to the last descent. Craddock managed to rejoin the two leaders. 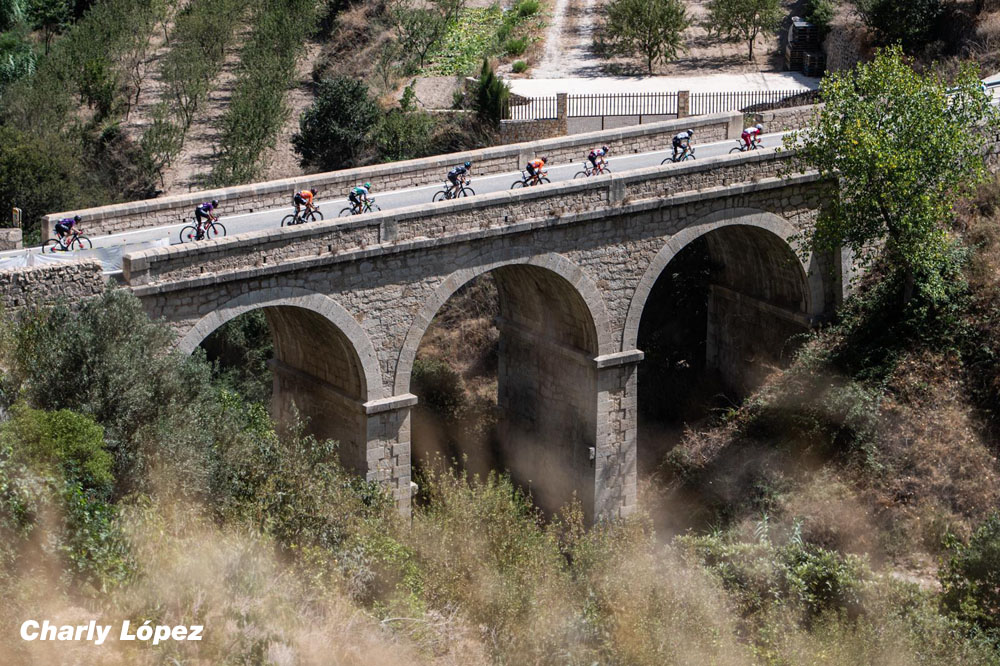 The peloton never seemed to ease off the accelerator 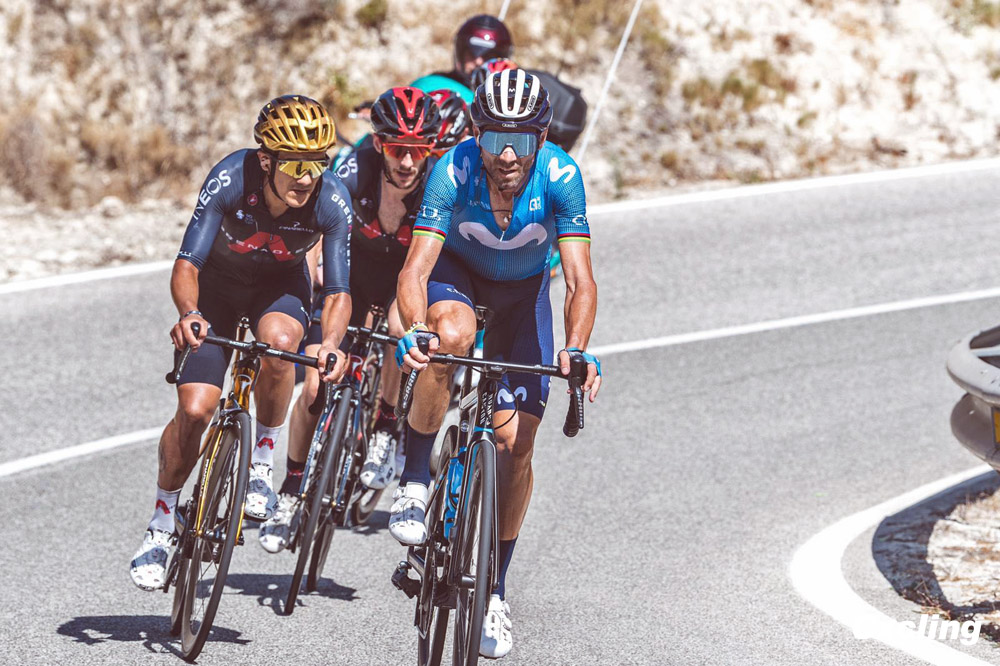 Valverde just before his crash 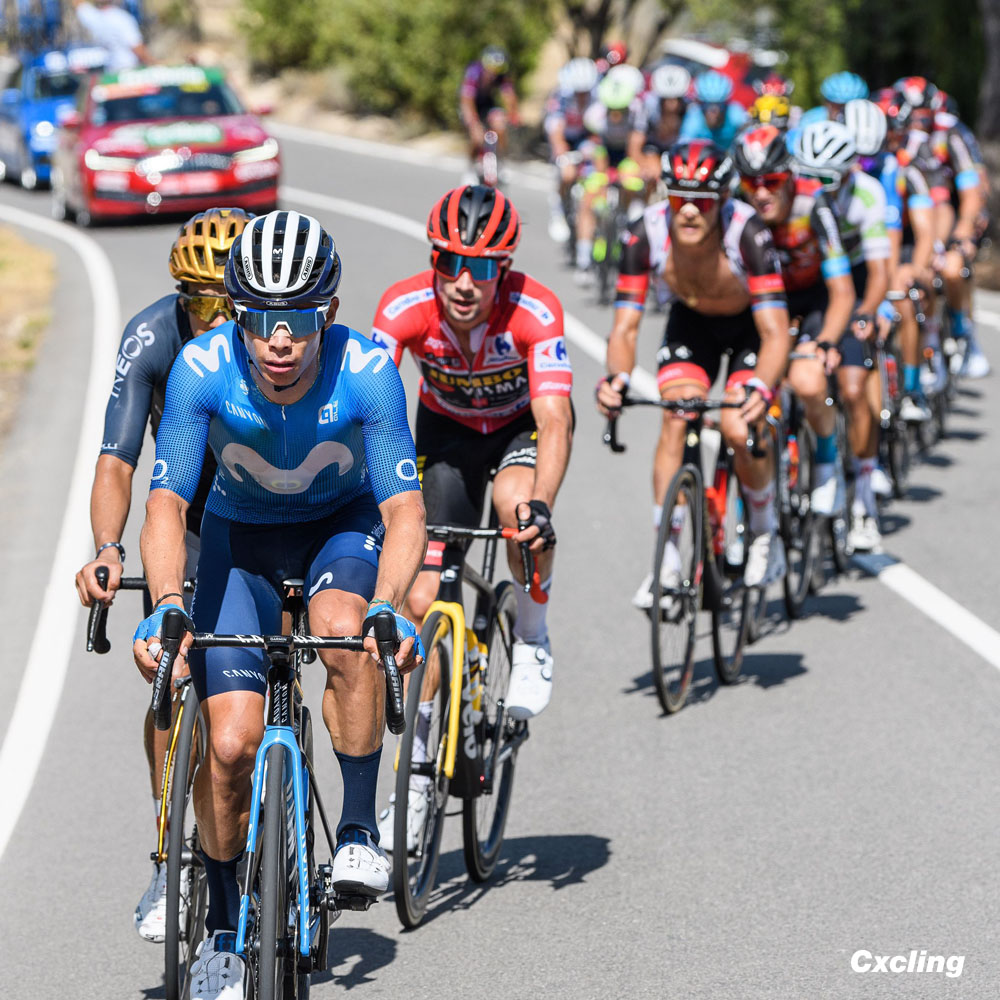 Verona continued to put pressure on Storer, but he managed to secure the stage victory. The Movistar rider had to settle for second place, Sivakov was third and the new leader in the mountains classification. Felix Großschartner crossed the line in seventh and then we had to wait for Roglič to finish. The Austrian rider was not able to take the red jersey as the Slovenian crossed the line with the favourites at 3:33 behind winner Storer, and retained his overall lead by 8 seconds. 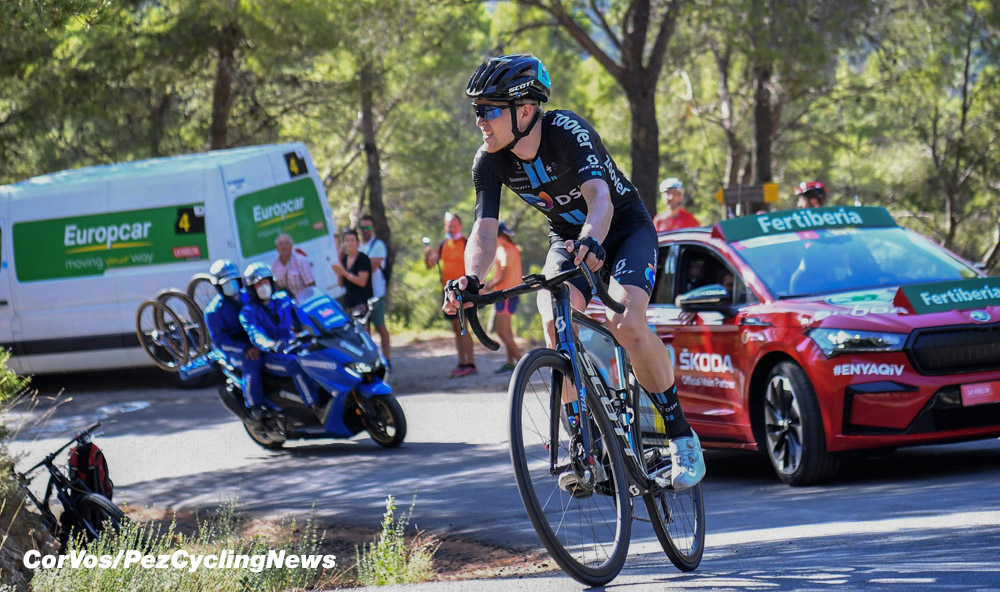 Storer climbing to the win 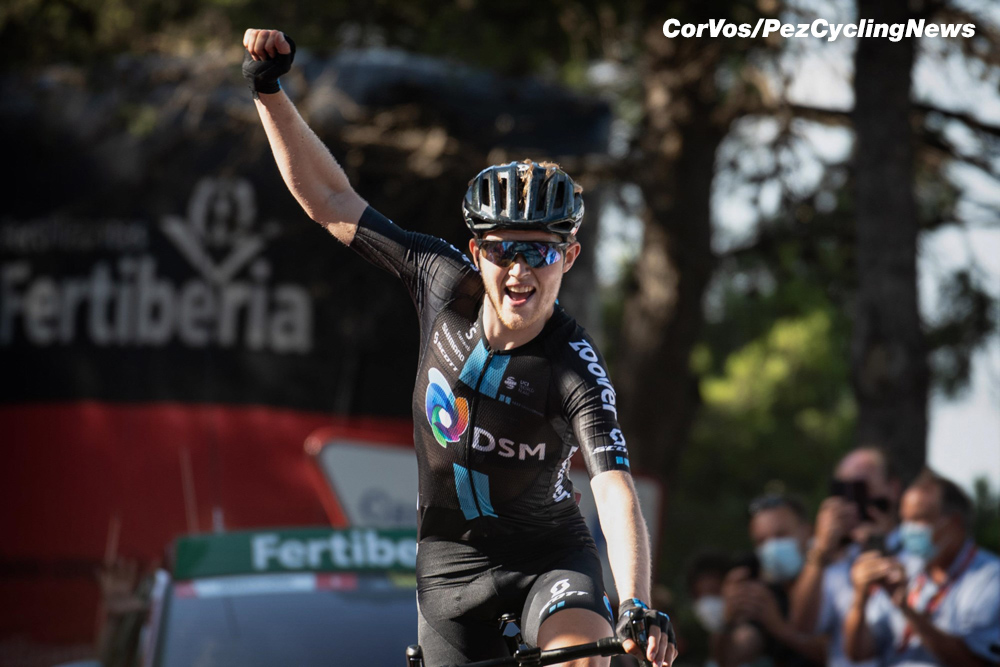 A big and well deserved win for Michael Storer

Stage winner, Michael Storer (DSM): “I didn’t expect to become a stage winner of La Vuelta. I knew I was in good form. I just had to have a go. I’m really happy and surprised that I managed to win today. It was a really difficult stage. I didn’t enjoy that last kilometre. I’m starting to realise that I made it. I really enjoy this victory. The team’s plan today was to be very aggressive. We also really dominated the stage today. I’m so impressed with the guys. We didn’t put one step wrong today. It’s really an incredible team effort. I hope this is just the beginning. I don’t know what I’m capable of doing. It was my goal to win at WorldTour level. I have to set a new goal now. [Storer The Destroyer] I think that nickname is taking on!” 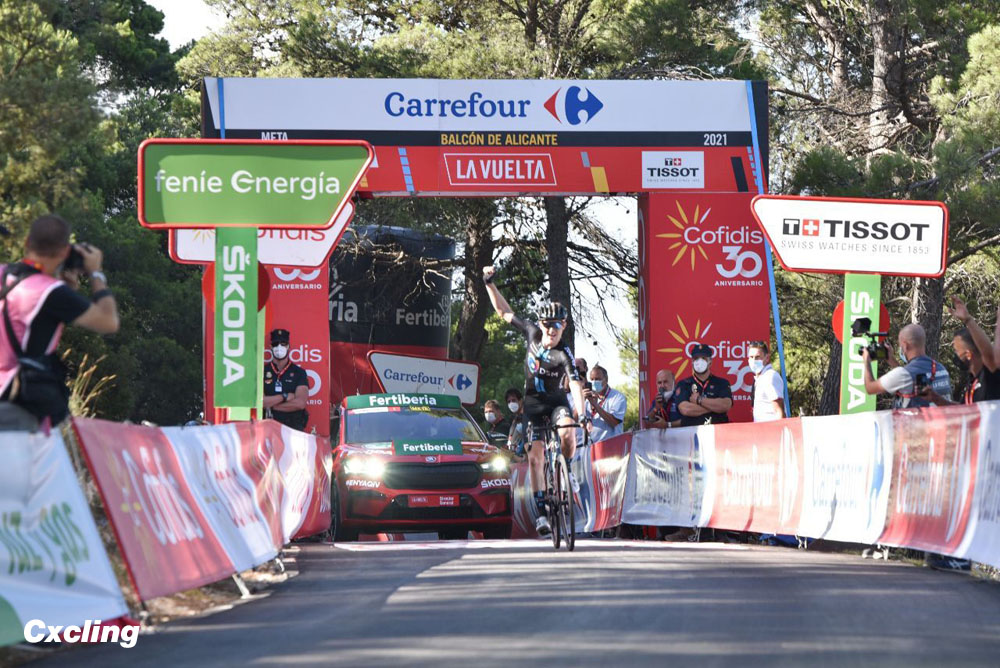 Tough finish to a tough day

Overall leader, Primoz Roglic (Jumbo-Visma): “Why not [lose La Roja to Jan Polanc]? He already took the jersey in the Giro and we wore it both [in 2019]. Again, these are super sweet worries for the Slovenians. For me it was a hard day, super hot, and we went already all out on the first climb. We saw quite some action today and we can expect the same in the next days with teams who have different contenders. But we saw our guys did a great job and we’ll do our best. I was just two guys behind [when Alejandro Valverde crashed]. I don’t know how he is. He’s one of the biggest names in cycling so hopefully he’ll be fine and he’ll soon be back.” 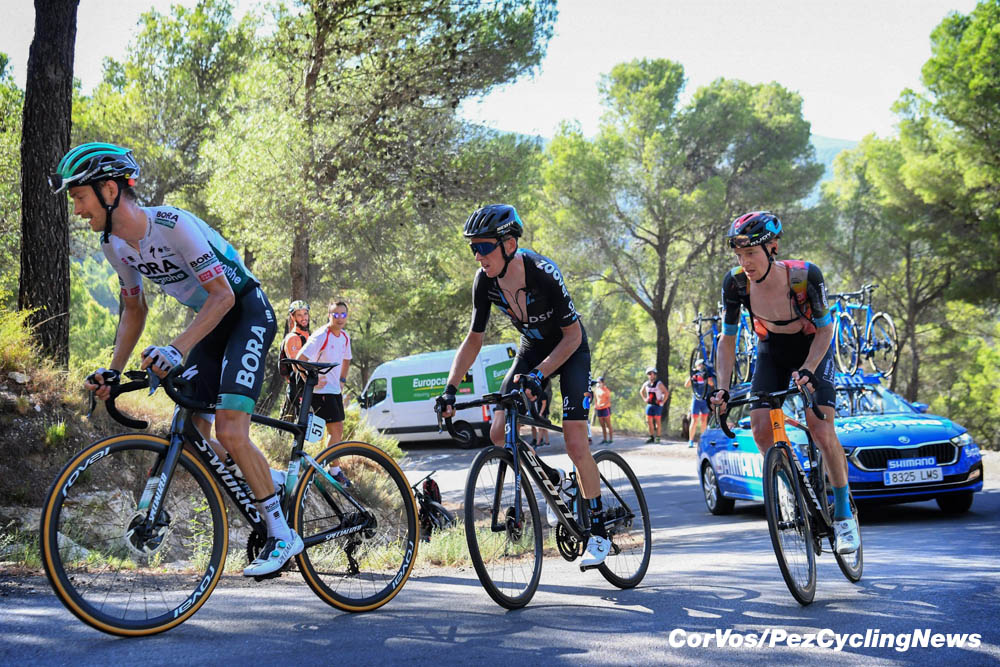 Großschartner moved up to 2nd overall