Vuelta Stage Report: Second sprint win for Deceuninck – Quick-Step’s Fabio Jakobsen, just ahead of Alberto Dainese (DSM) and Jasper Philipsen (Alpecin-Fenix). At the end of scrappy sprint, Jakobsen was positioned perfectly by Florian Sénéchal to launch his final burst over the line for stage win and the points jersey. Primoz Roglič (Jumbo-Visma) finished in the bunch to hold his overall lead.

The last kilometre of stage 8

After the ‘break of the day’ was scooped up by the peloton, it was down to the spinter’s teams to take control into La Manga del Mar Menor. No team could dominate the final metres, but Sénéchal put in a strong effort on the front to set Jakobsen up for the win.

Technical director, Fernando Escartín: “Fourth and final sprint arrival in the first week of La Vuelta 21. It is a very windy area, which may complicate the day’s racing, through it tends to be less so in summer. Favourable day for teams with sprinters who wish to fight for victory in a new mass arrival.” 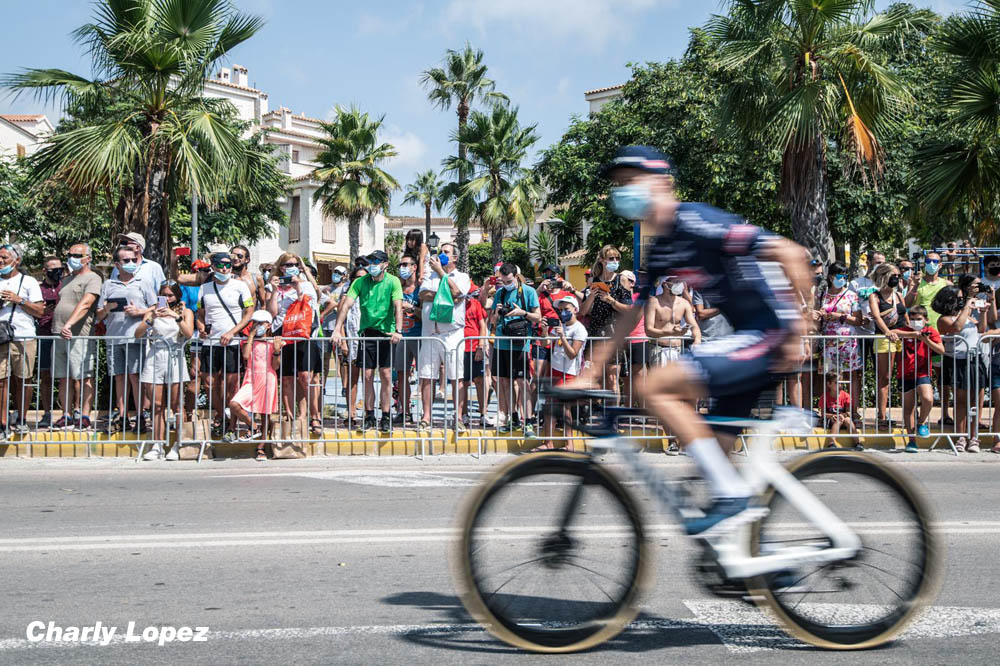 The fans were out again for the sign-on 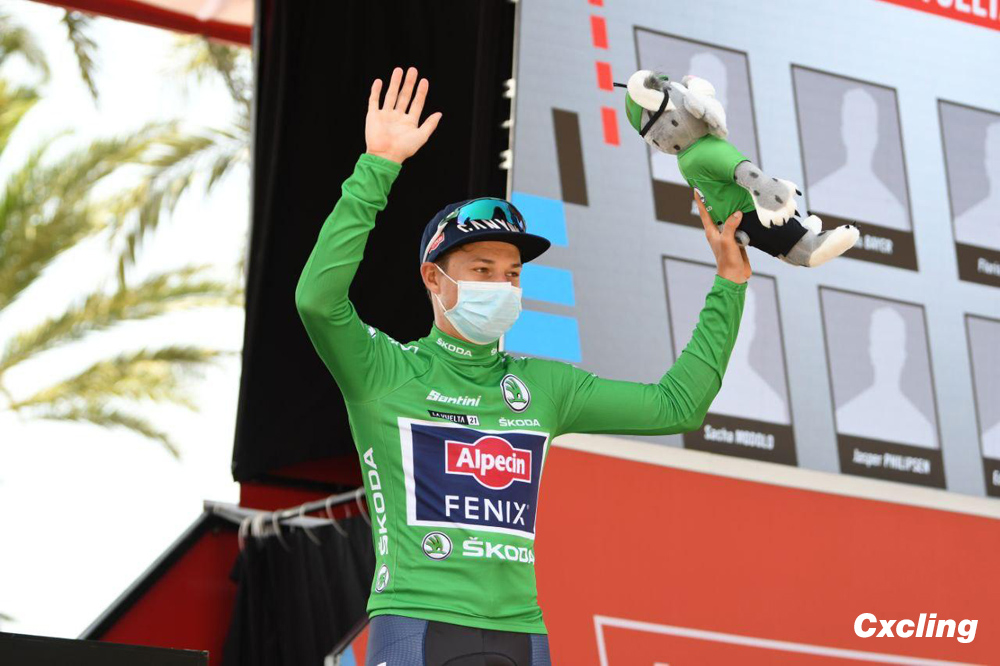 Will Jasper Philipsen still be in green at the end of the day? Only 1 point between Philipsen and Jakobsen at the start of the day

Can Jasper Philipsen (Alpecin-Fenix) make it three victories in La Vuelta 21 with today’s finish? “It’s a nice race for sure but yesterday was a hard stage so I didn’t love La Vuelta so much!” He said with a laugh at the start. “[Today] we just go for it. It’s another sprint stage. There aren’t too many flat days anymore, with some hard next stages, so let’s try to focus on today and take this opportunity.” 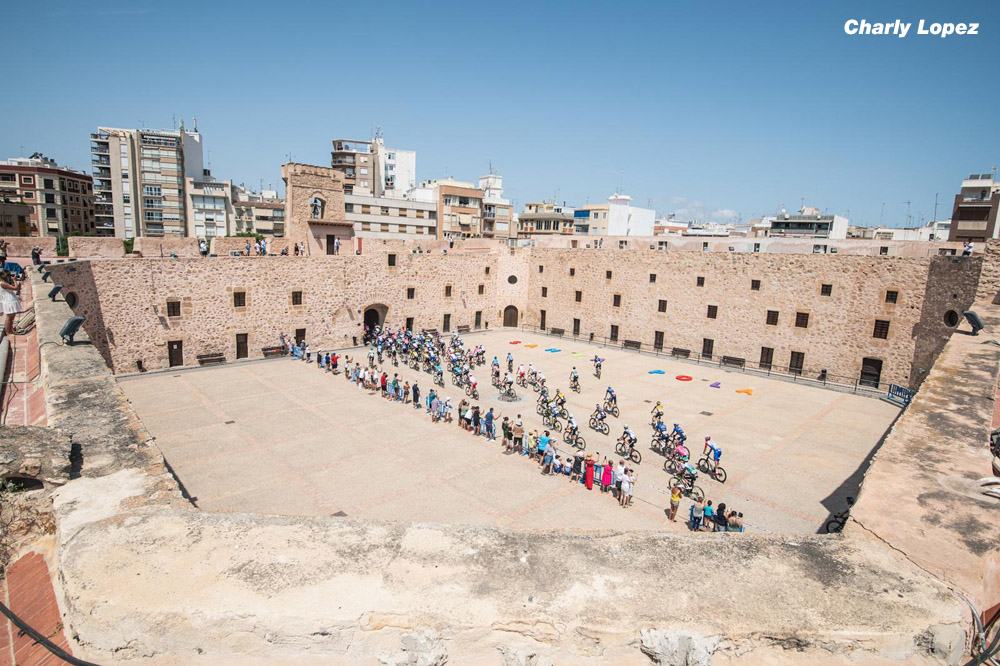 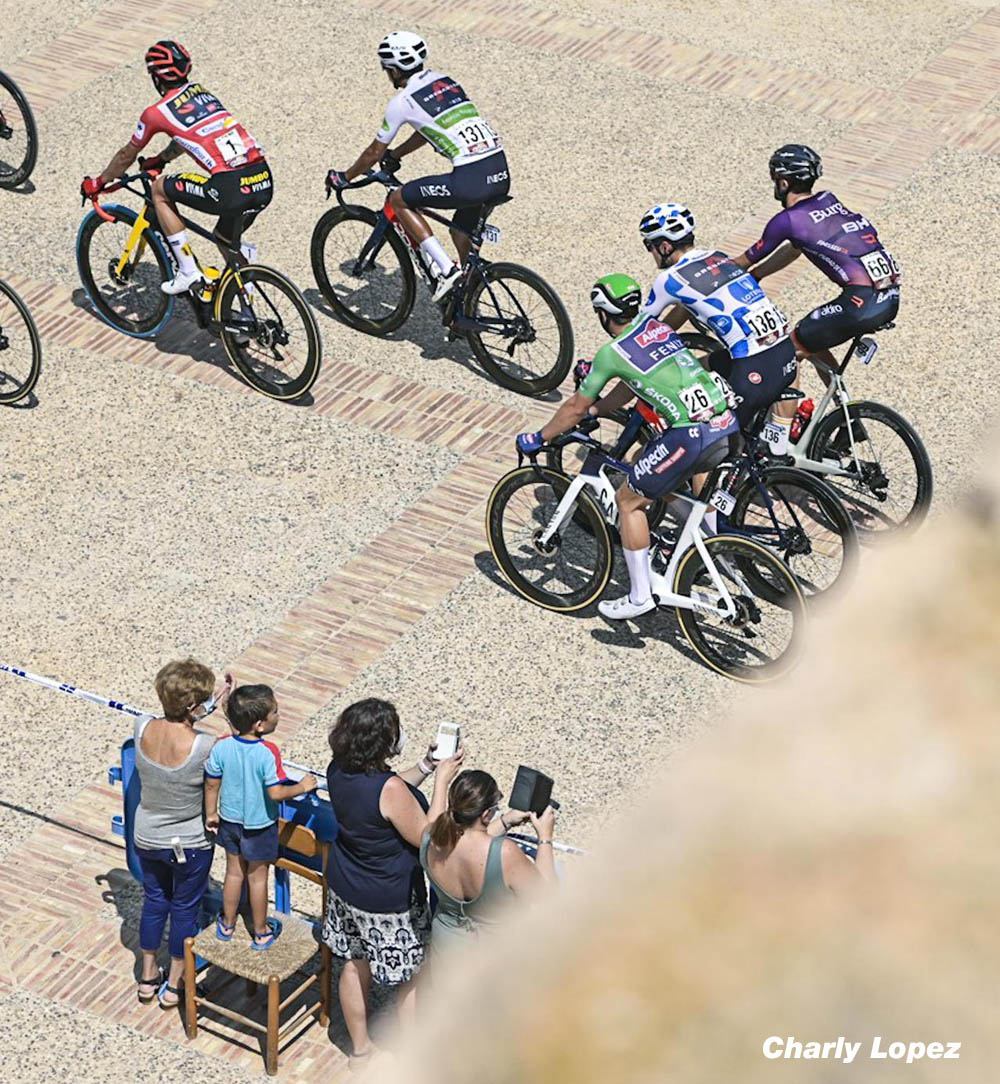 The classification leaders leave the castle

As soon as the flag was dropped for the start of stage 8 and another sprint finish, a leading group attacked. The Basques Mikel Iturria, Ander Okamika and Aritz Bagues soon had a couple of minutes lead and some good TV exposure. They would try to stay out front as long as possible. 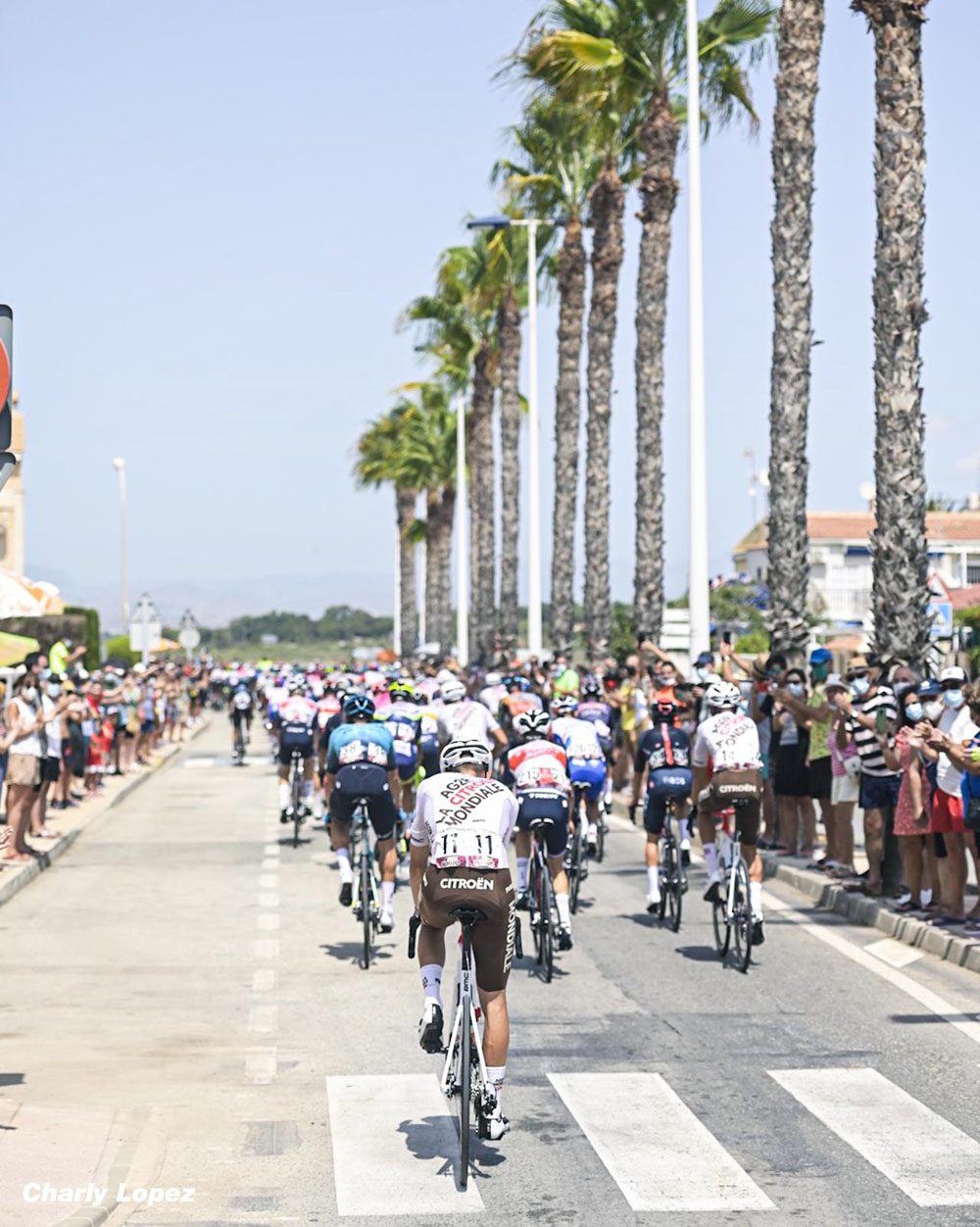 The course follows the coast south for most of the day 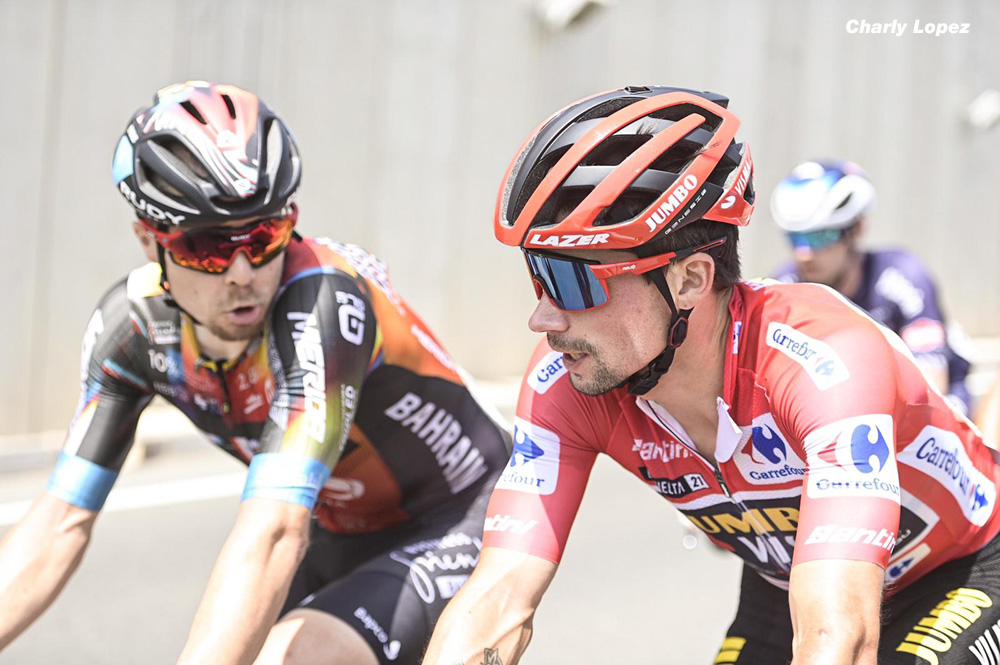 In the first hour of racing the lead of Iturria, Okamika and Bagues increase to 4 minutes, but then Deceuninck – Quick-Step took responsibility for their Fabio Jakobsen. The sprinter has already won one stage in this Vuelta and second twice, but he was aiming for another stage and to take the green jersey from Jasper Philipsen. 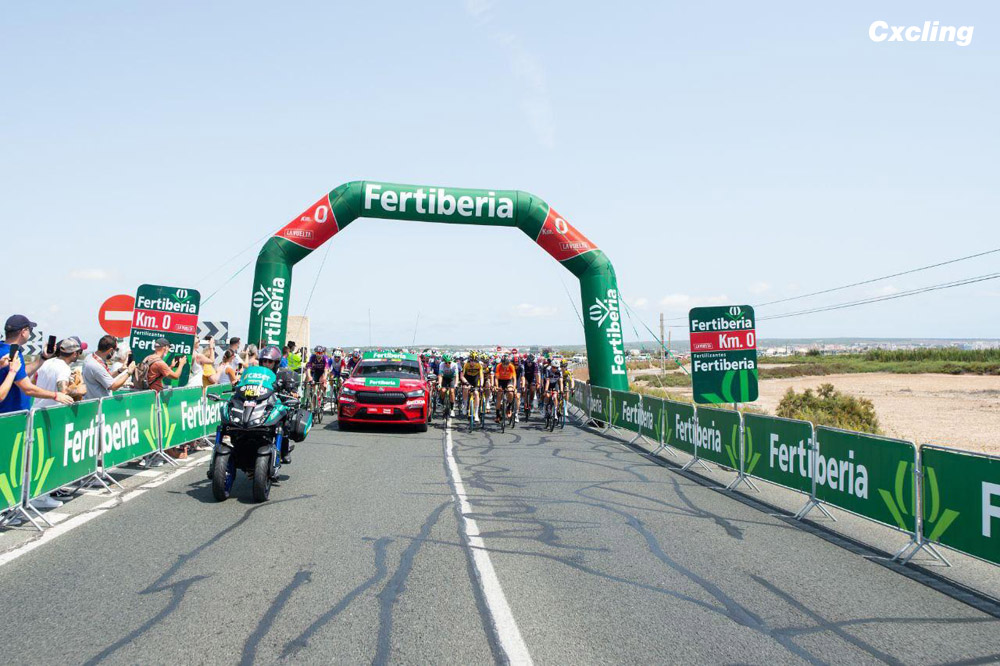 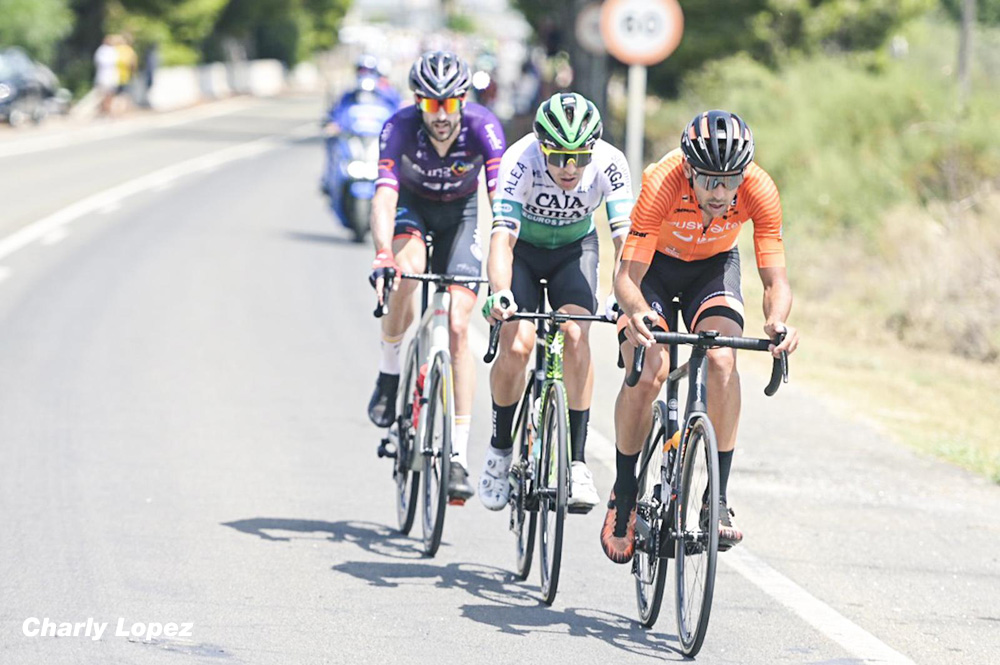 At the intermediate sprint, 70 kilometres from the finish, Jakobsen saw Philipsen take a few more points, but that was of minor importance for the end of the day. If one of the two was first to cross the line in La Manga, they would capture the green points jersey. 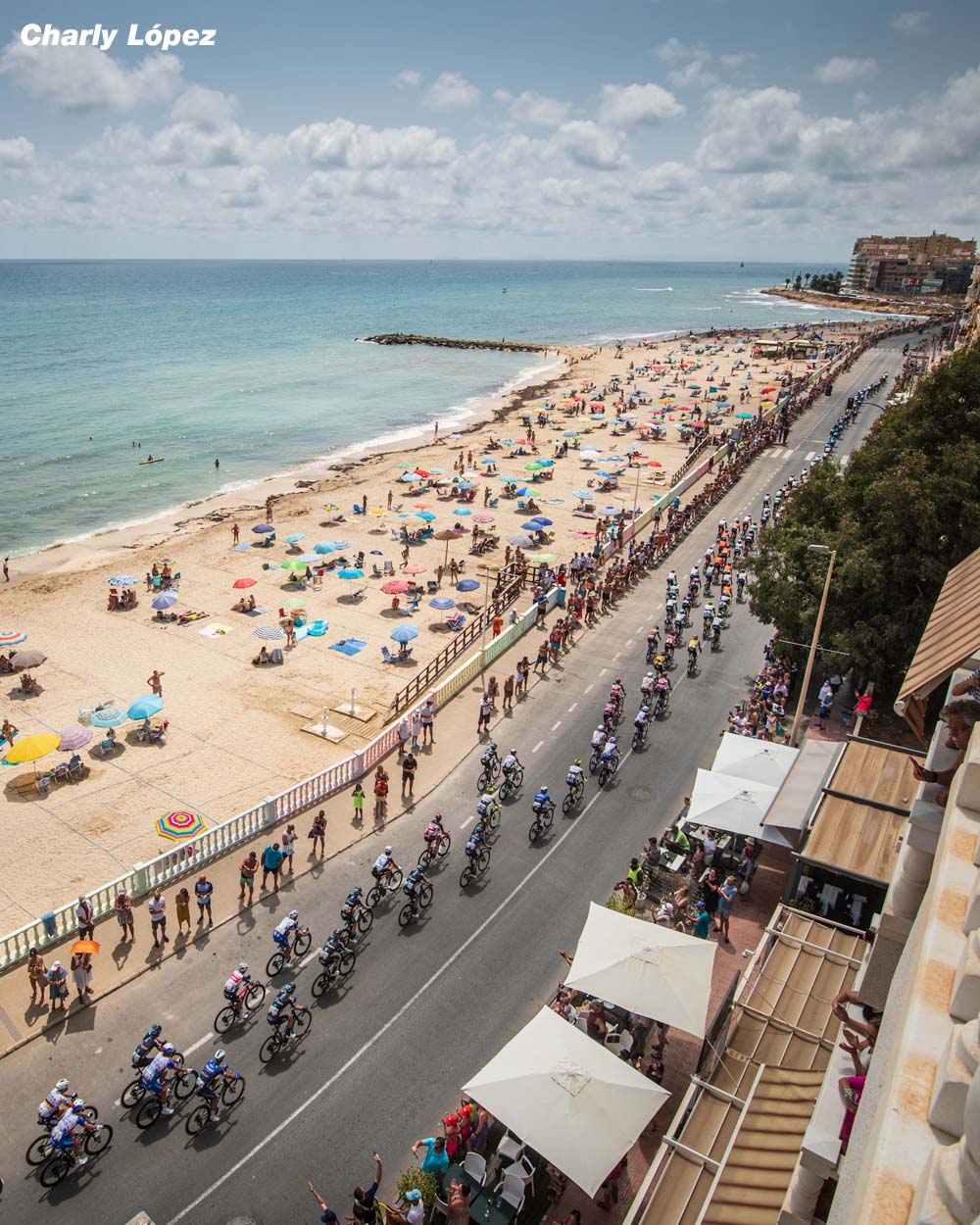 The peloton at the Playa de Torrevieja 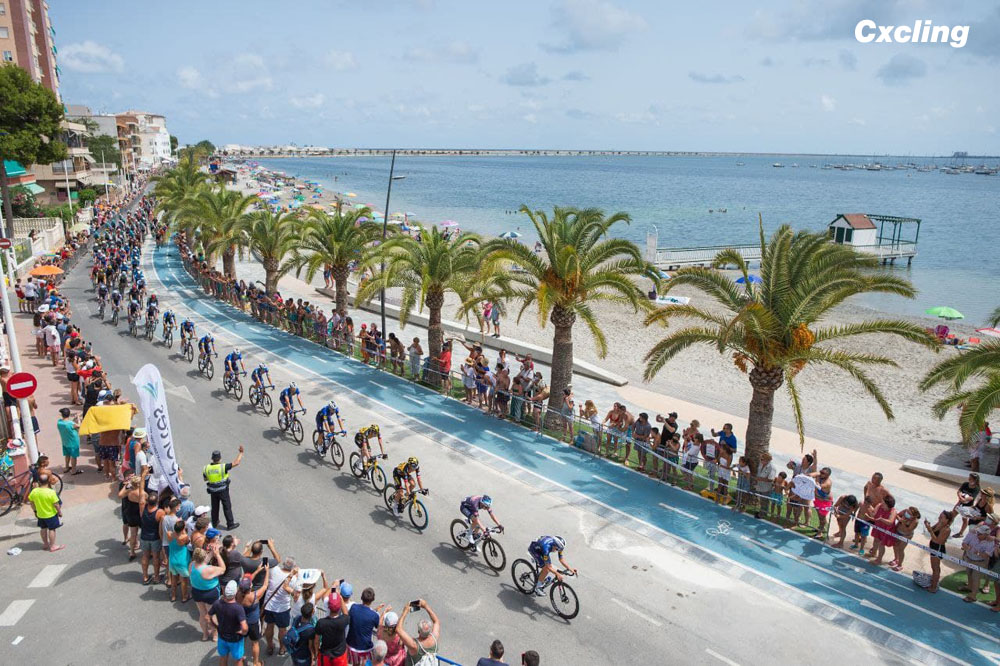 And the Playa de Villananitos

At 36 kilometres from the finish, the three escapees were caught and the sprinter’s teams could start their preparation for the sprint. The trains of Alpecin-Fenix, Deceuninck – Quick-Step, DSM and Groupama-FDJ massed at the front towards the finish line. 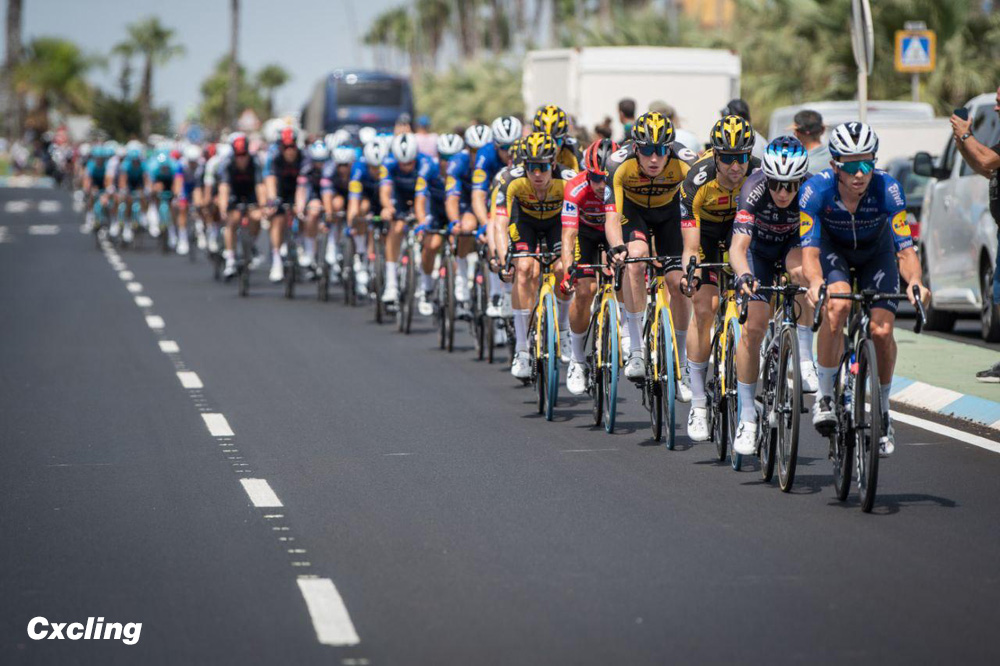 Deceuninck – Quick-Step had James Knox on the front 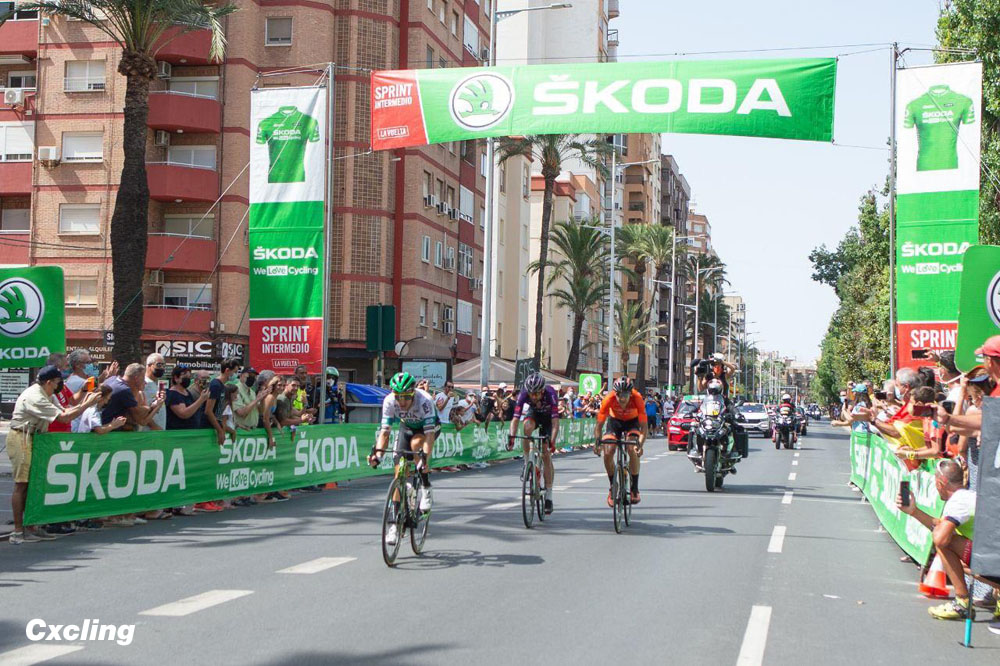 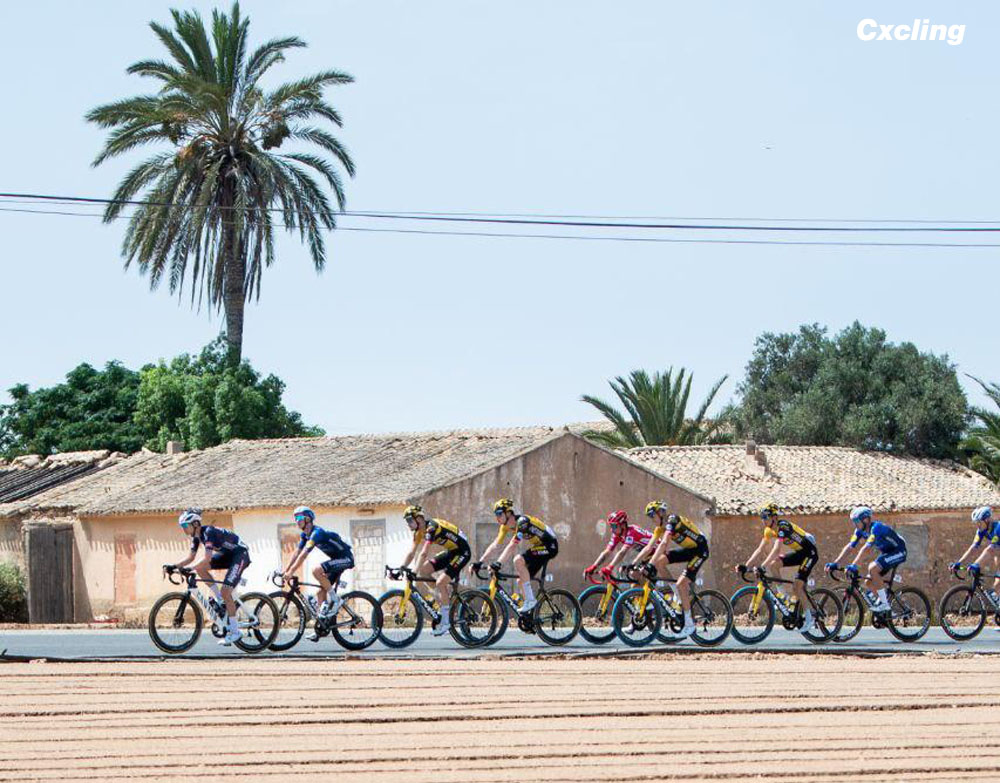 The chase was on… eventually

After a messy finalé, in which Jetse Bol jumped away as most of the trains had lost their sprinters, Jakobsen managed to start the sprint in pole position. He jumped on first and Alberto Dainese and Philipsen had no answer to his acceleration. Jakobsen took his second stage victory and the green points jersey from his Belgian competitor. 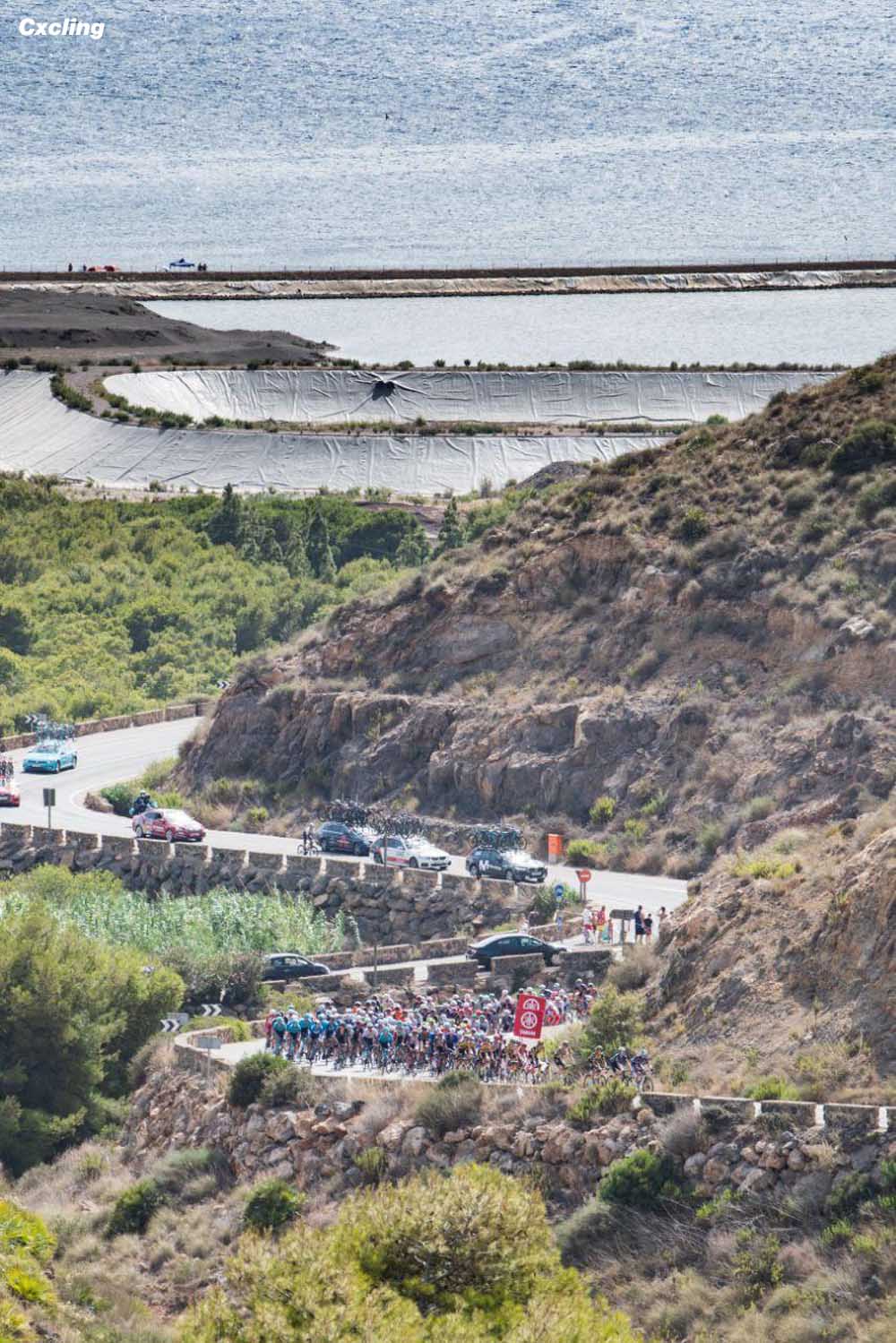 Back to the coast for the finish 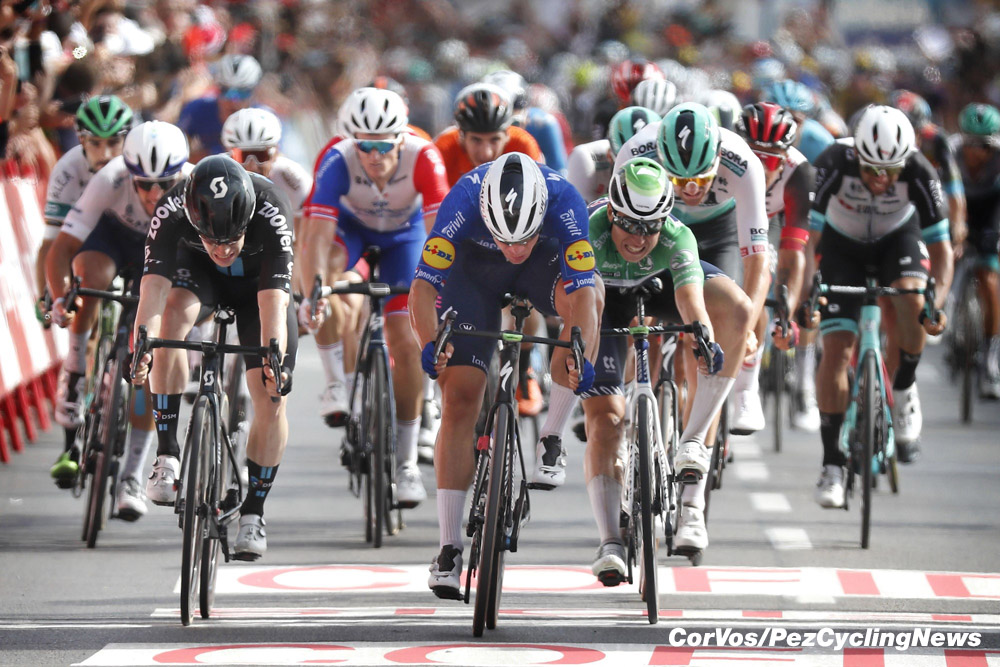 It was a rough sprint, but Fabio Jakobsen was clever and fast

Stage winner and points competition leader, Fabio Jakobsen (Deceuninck – Quick-Step): “It’s very special to be here again. I wasn’t feeling that good this morning. Yesterday was a hard stage. But the team had faith and I’m happy to finish it off. It was a fast last 10km along the coast. The team did a perfect job. They got the speed high, and even though I lost them a little bit, I was still able to be in a good position. I launched my sprint in the corner, with 200m to go, and I was able to be the fastest I think. It was about being strong, fast and it was about timing I think. On a finish like this, you need to be on time. I’ve been twice too late and this time it was perfect and I could do a full sprint to the line. Two years ago, I won twice. I’m just extremely happy and I’m grateful to be here. I’d like to thank the team again. Patrick Lefevere is here today and I’m sure he’s happy. We will try to keep on winning sprints.” 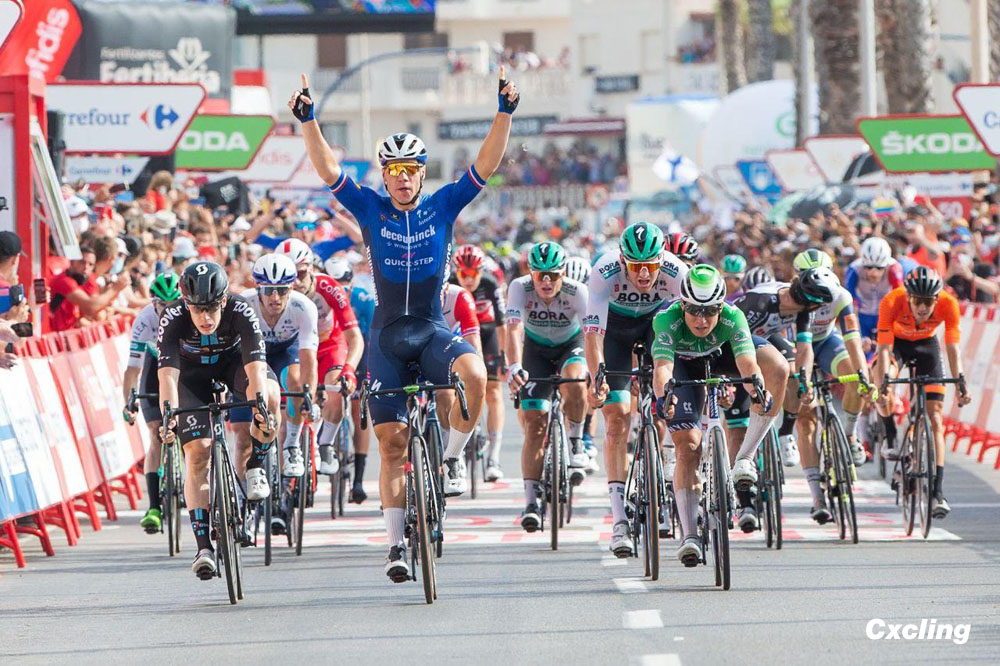 Overall leader, Primoz Roglic (Jumbo-Visma): “It’s super nice for us to enjoy such a big support from the people who are here on holiday. With the crowd it feels much different than it was a year ago. It was again a nice day on the bike. I stayed out of troubles. Whatever situation I’m in for the rest day, I’ll go with it. It’s true that tomorrow is a big day in the mountains. My guys showed yesterday that they are super strong. I also have good legs and we’ll definitely fight for the red jersey.” 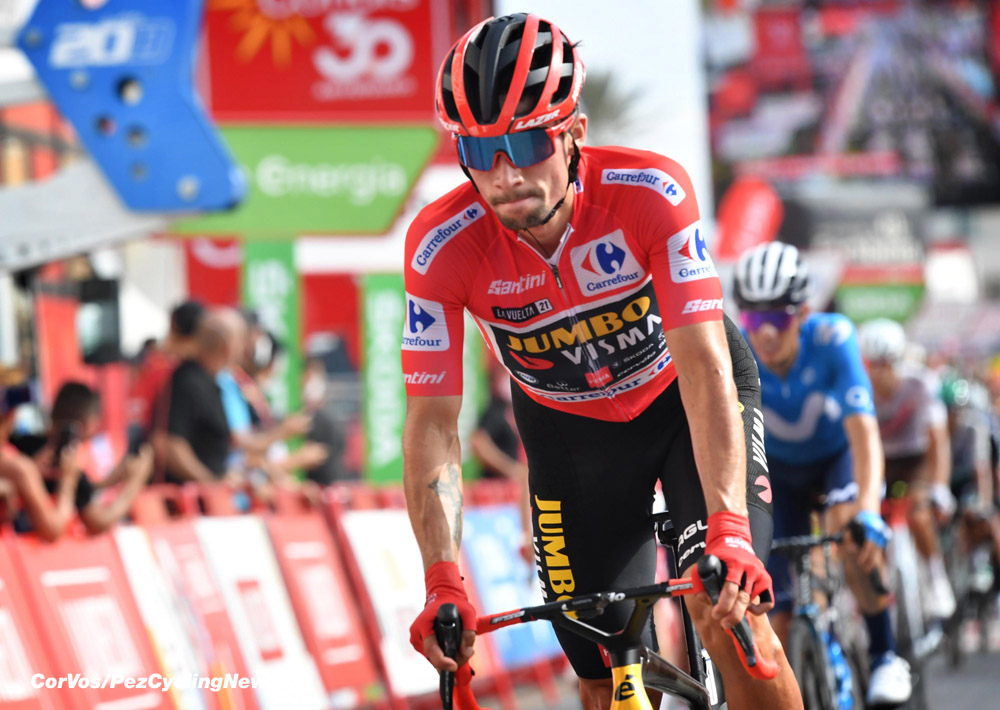 Another stage in red