Mountain Preview: The 2021 Vuelta a España has been hard so far, but the final week is murderous. Stage 17 on Wednesday has a massive kick in the gut on the climb to Lagos de Covadonga. PEZ got up close and personal with the sleeping giant on a quiet day ahead of the race in 2010. Here’s a preview of what’s to come. 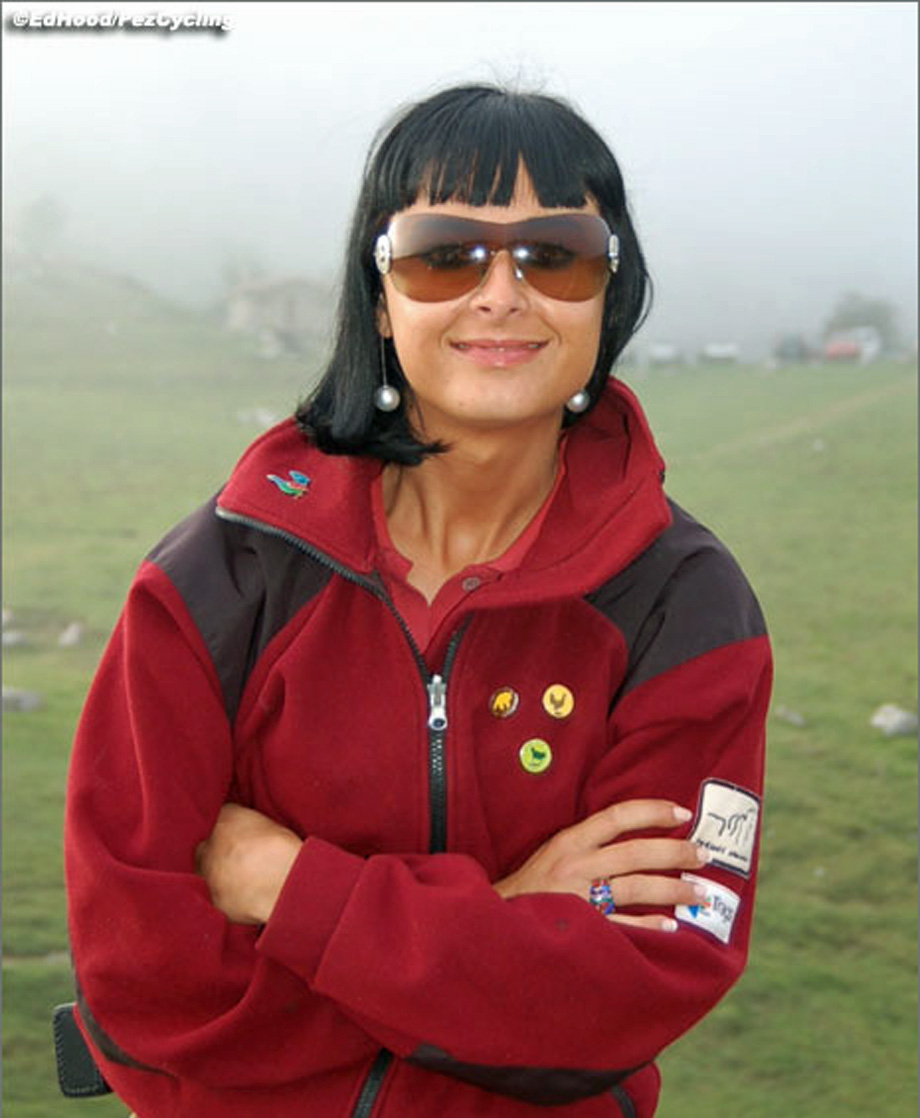 “Why do you want to go further, nothing is there?” the cute park ranger asks us; she’s guarding the last section of the fabled climb. 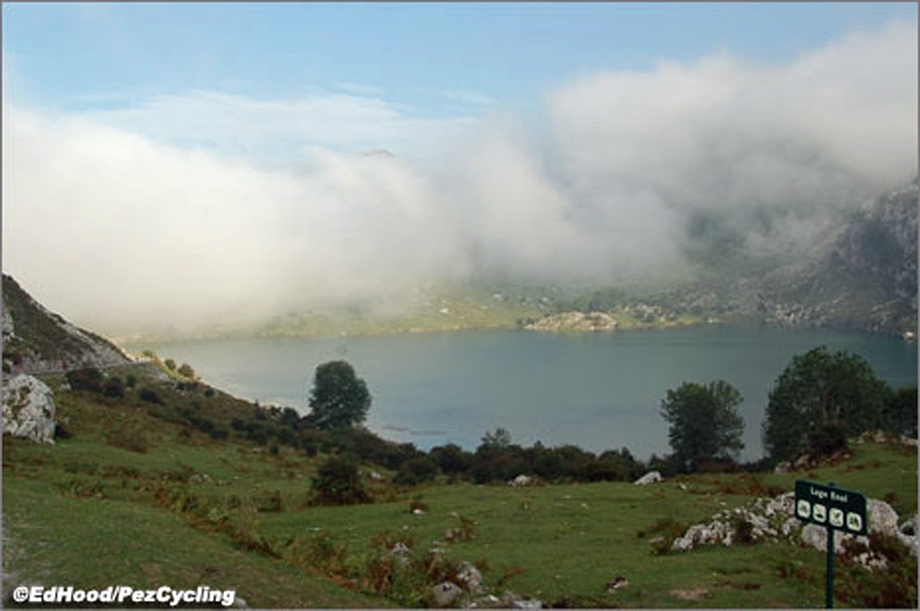 We’re beside Lago Enol, one of the beautiful Lagos de Covadonga and we need to drive the finale to complete our PEZ mission for the day. “Two minutes?” we plead with her – “you have ten and then I come looking for you!” she smiles. 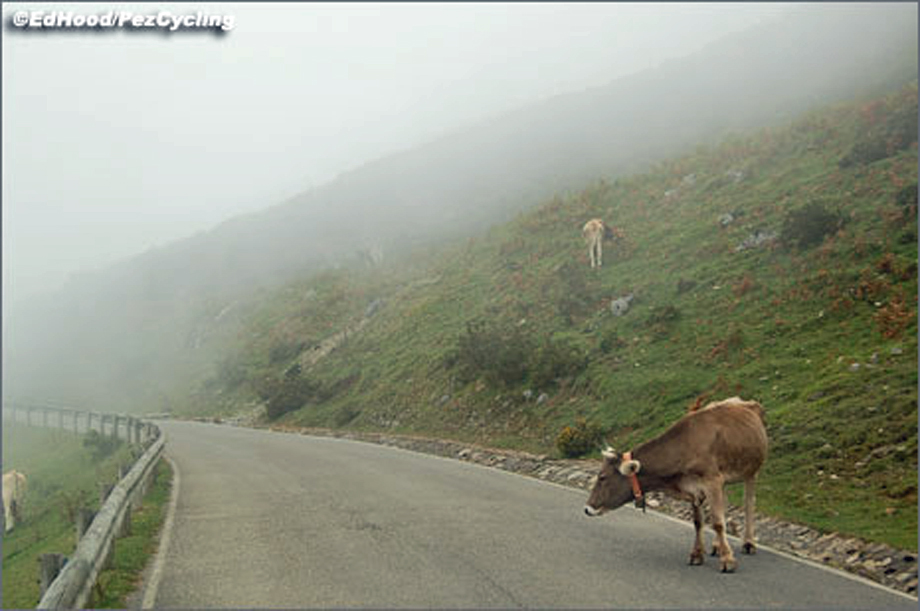 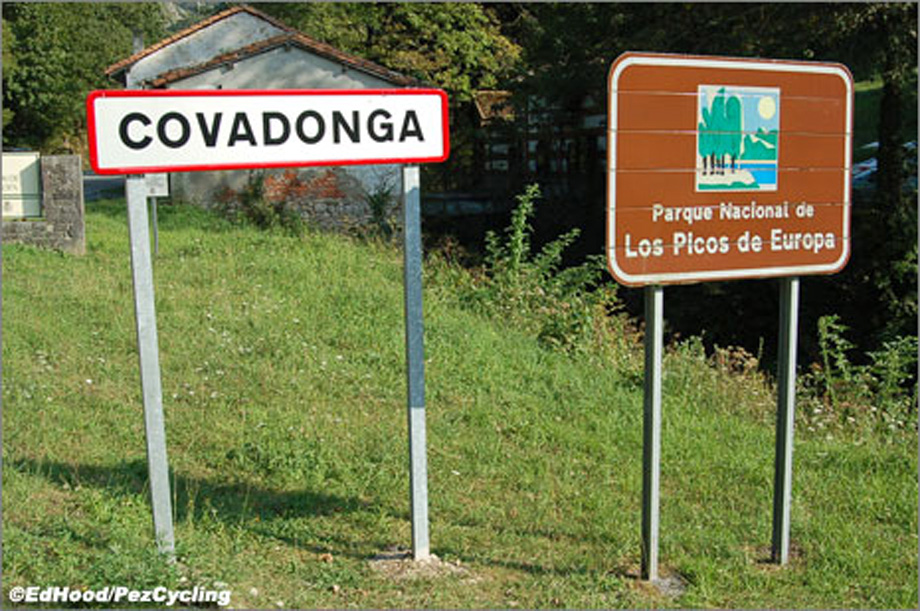 But we’ve been there; to the top of the Covadonga Lakes climb. Like its sister climb in the Picos de Europa range, the Angliru, further to the west, it’s a ‘road to nowhere’. On our way down she tells us that yes, she’s seen the bears, and the wolves, but they live much higher up. 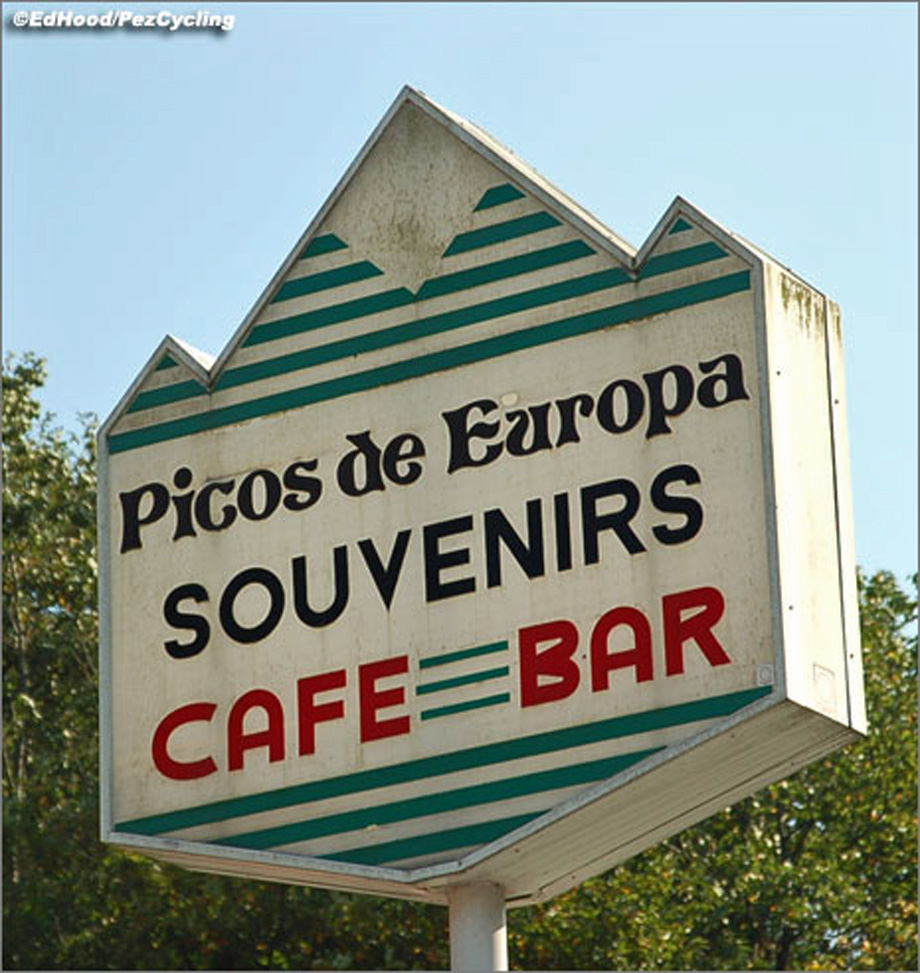 An hour or two earlier, on the valley floor, we dropped in to the Picos de Europa souvenir shop to see if we could get a good guide book to Covadonga, its lakes, its legends, wolves and bears. There were no books, just souvenir tat – but there was a cafe with a TV. Terpstra and Millar, clear of the peloton on the final climb – but with an angry lead group behind. Crash! And Anton is out; he looked so happy in Burgos, this morning. 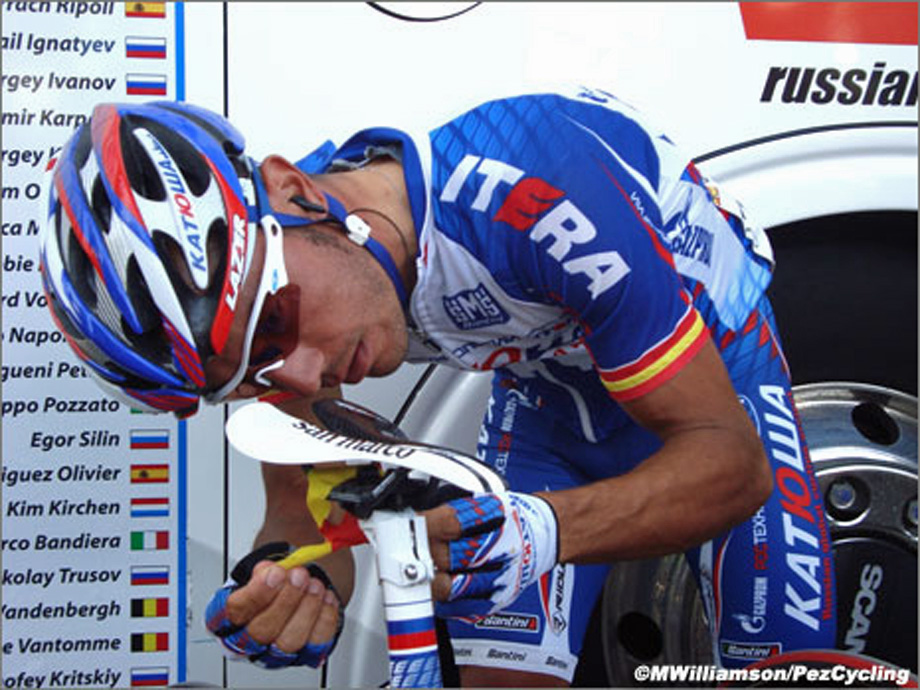 Rodriguez! That yellow and red ribbon we saw him tieing under his saddle must have done the trick. 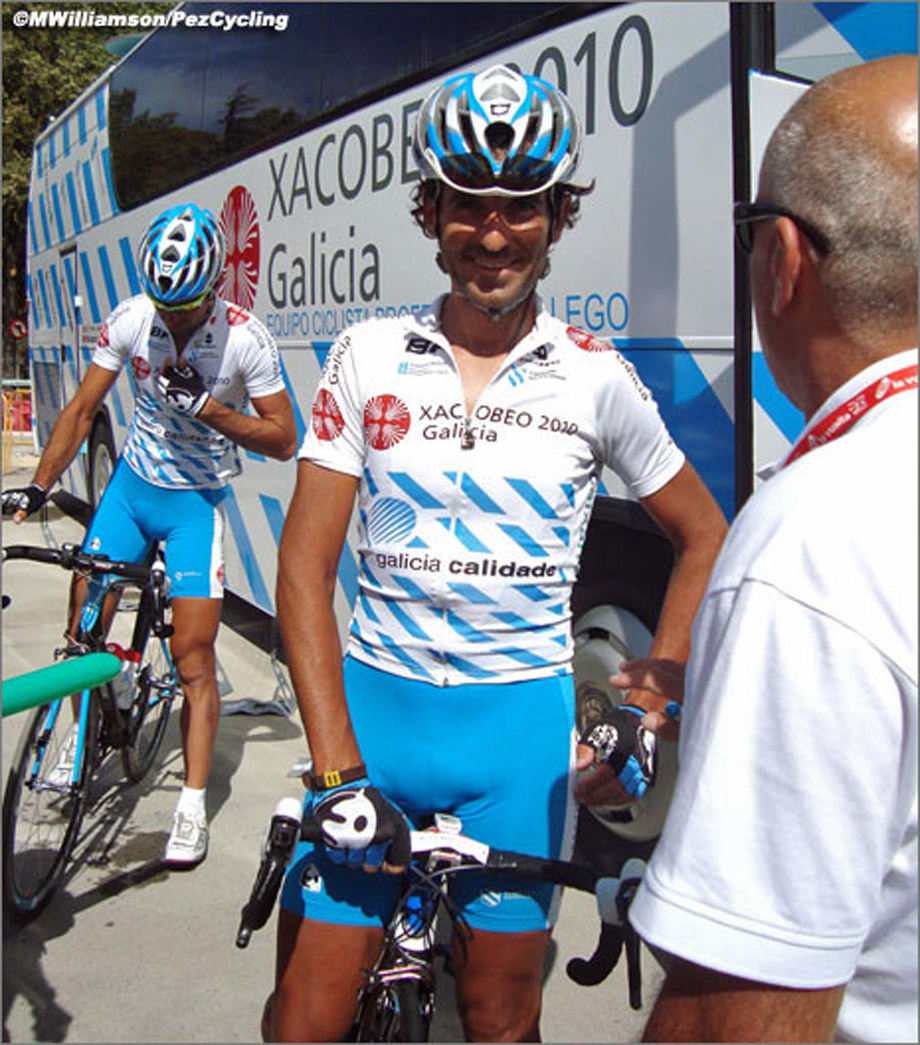 Mosquera patiently answers questions for the cameras, moments after that killer finalé – we can’t help but compare his easy going demeanour to Cav’s this morning; stoney faced because he couldn’t be bothered with fans asking for photos. Onwards and upwards along the valley for us; Covadonga is a famous shrine, a holy place and not just because of the Vuelta. In the year 722 the Asturian chieftain, Pelayo defeated the Moors (we’d call them Arabs – they ruled Spain for nearly 800 years) at the battle of Covadonga. It’s seen as the start of the ‘Reconquest’ of Spain where Christian forces gradually drove the Moors out. 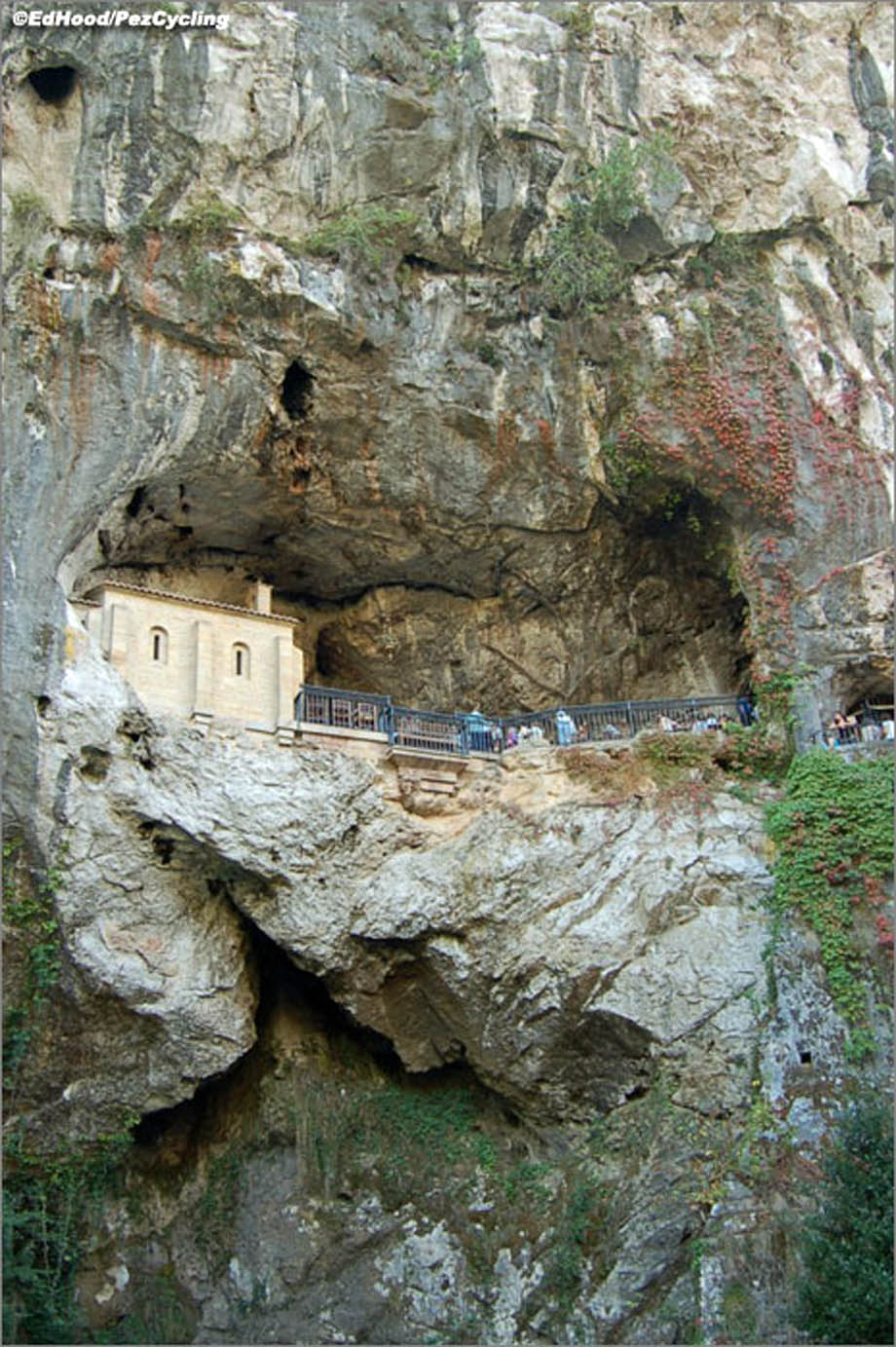 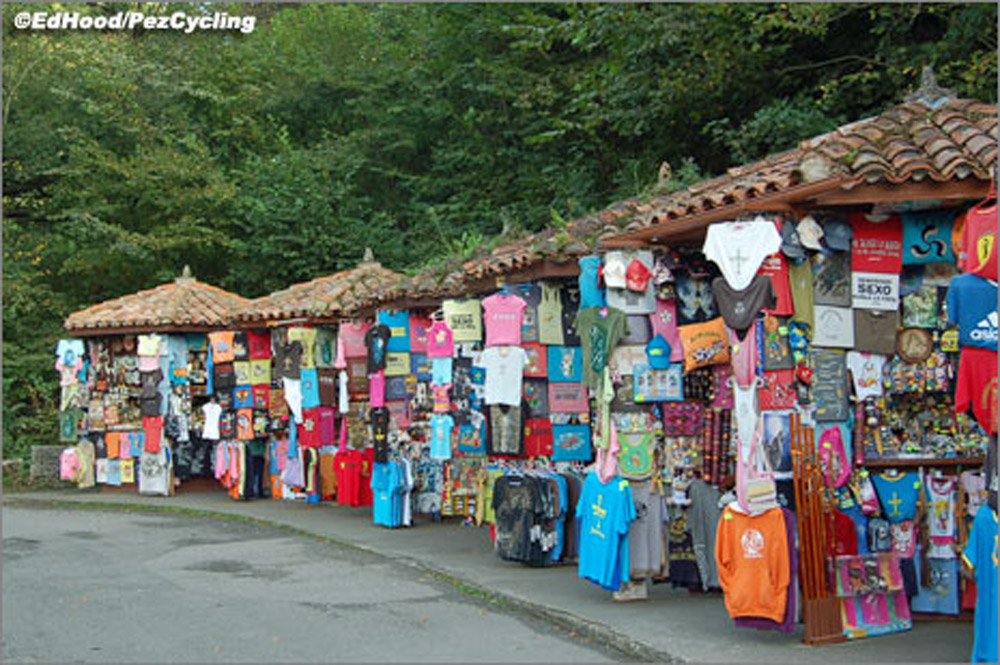 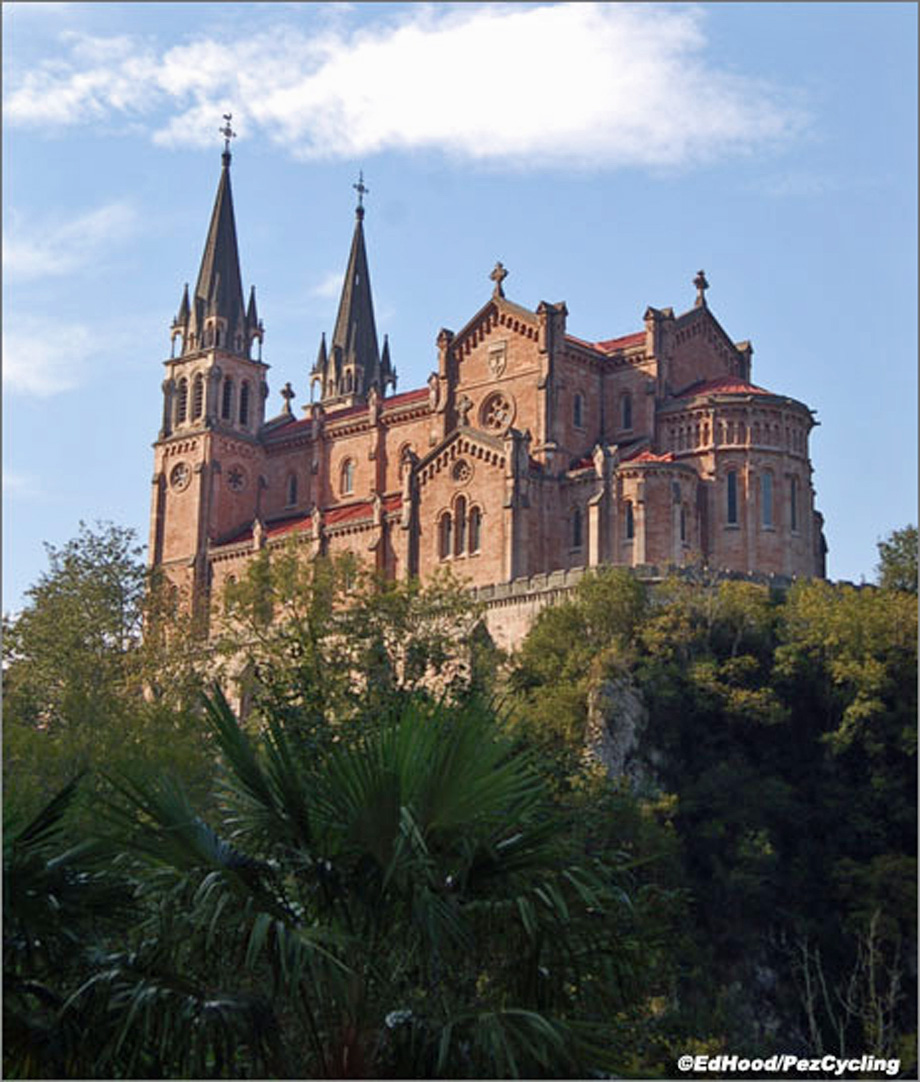 Across the valley is the beautiful basilica which was built straight on to the rock a hundred years or so ago. There’s more recent history not far from this climb, in 1937 at Mazuco there was a savage battle in the Civil War where Republican troops held off the Nationalists and their German allies despite odds of seven to one, until they were eventually overrun. Asturias T-shirts duly bought at the tat stall, we needed to flash the creds to the friendly policeman guarding the Lagos road end and then we were on our way. There aren’t a lot of hairpins early on the climb, it’s wide and the bends are open, winding fairly gently through a heavily wooded valley. The road surface is patchy, but not the worst. The gradient is steady and tough, especially after climbs that precede Covadonga on stage 17. 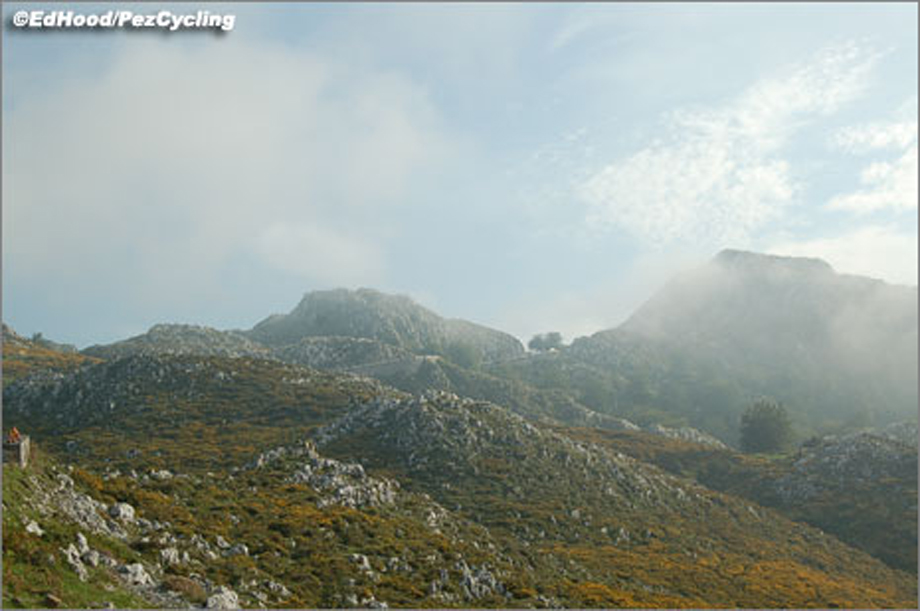 The tough ascent to the Lagos de Covadonga 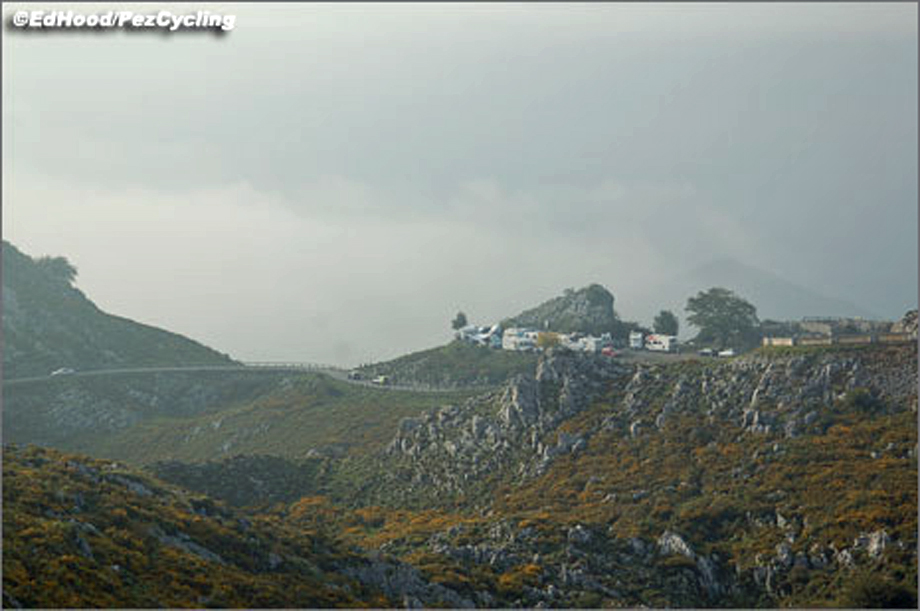 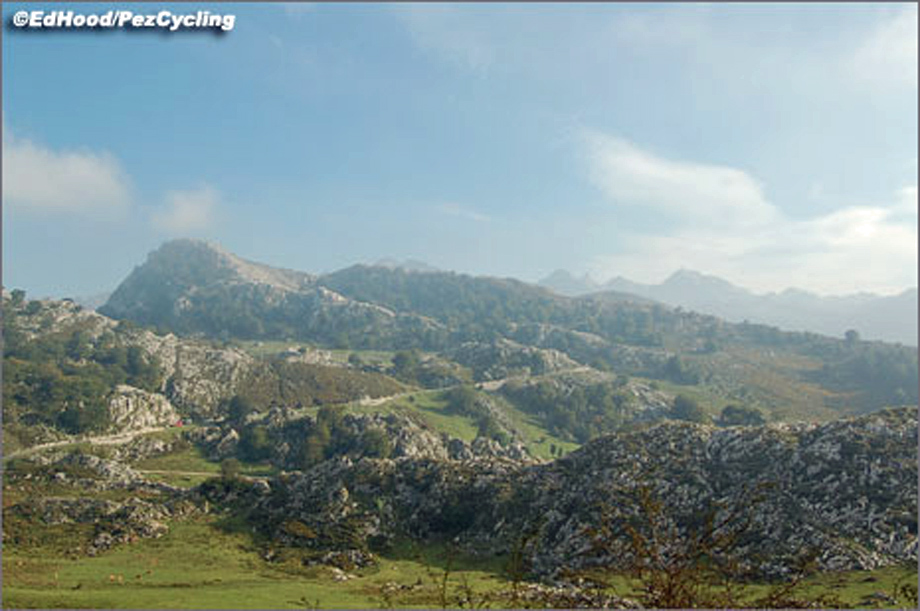 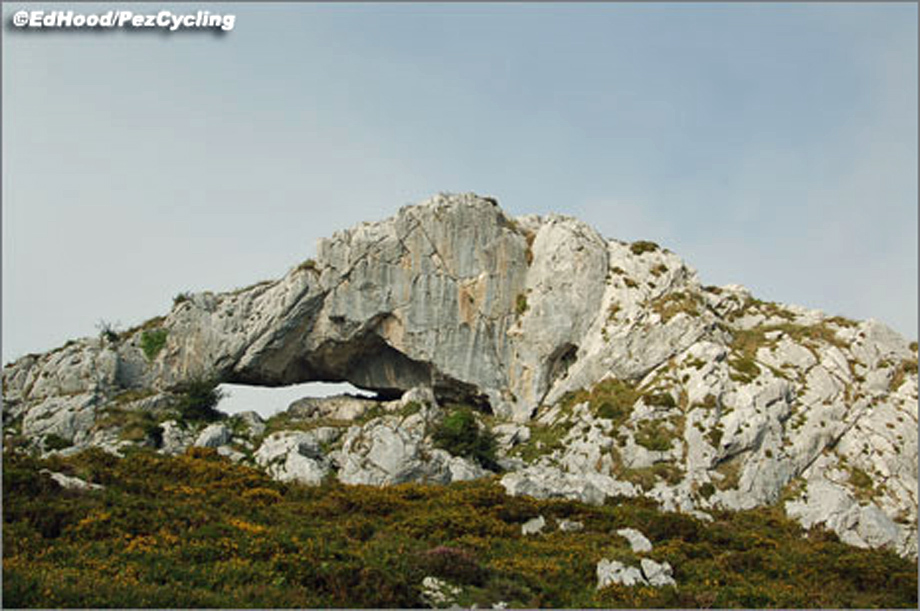 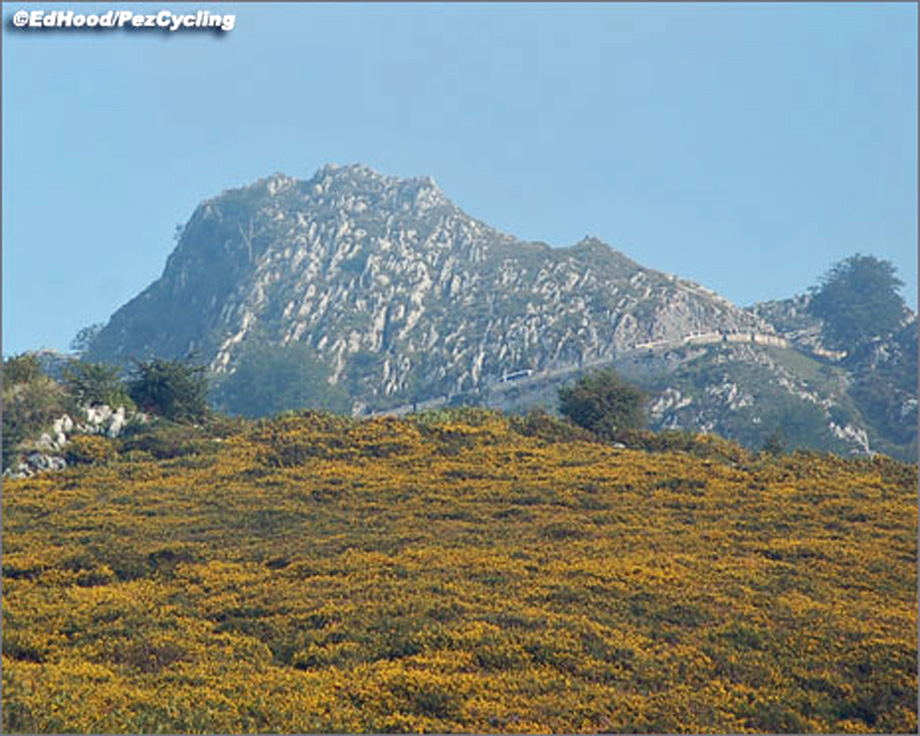 There are few buildings; those that there are old and rough hewn. It feels detached from the world we’re familiar with – maybe Tibet or Nepal from The National Geographic Channel. 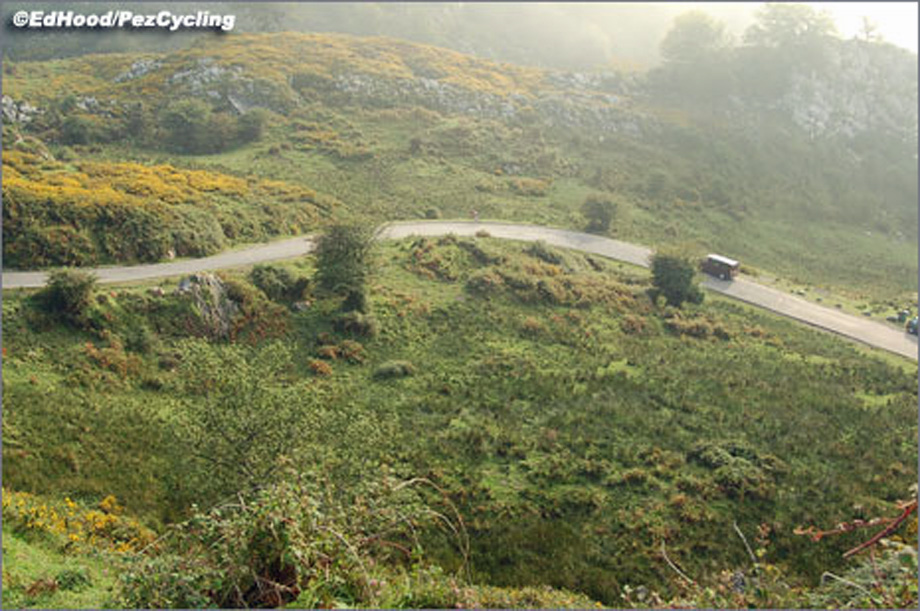 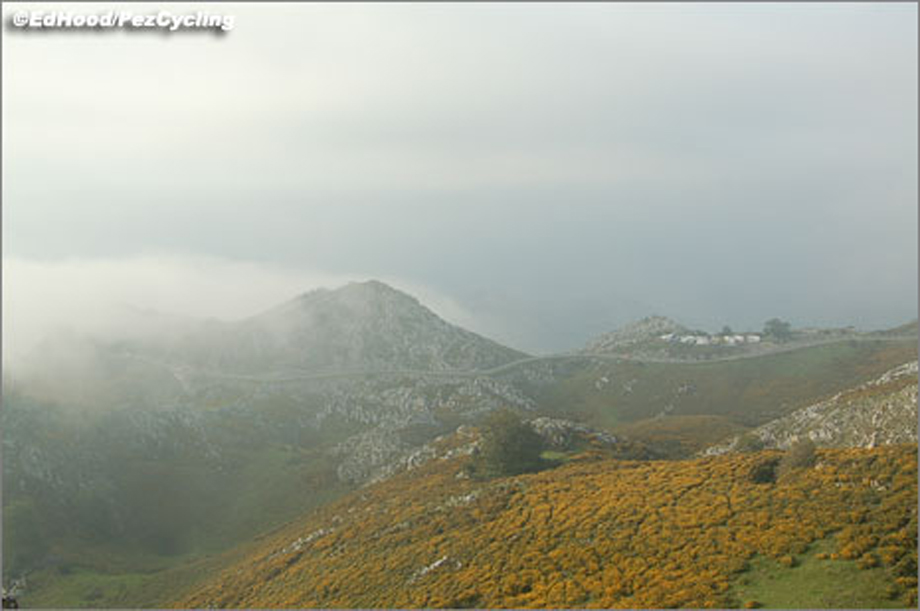 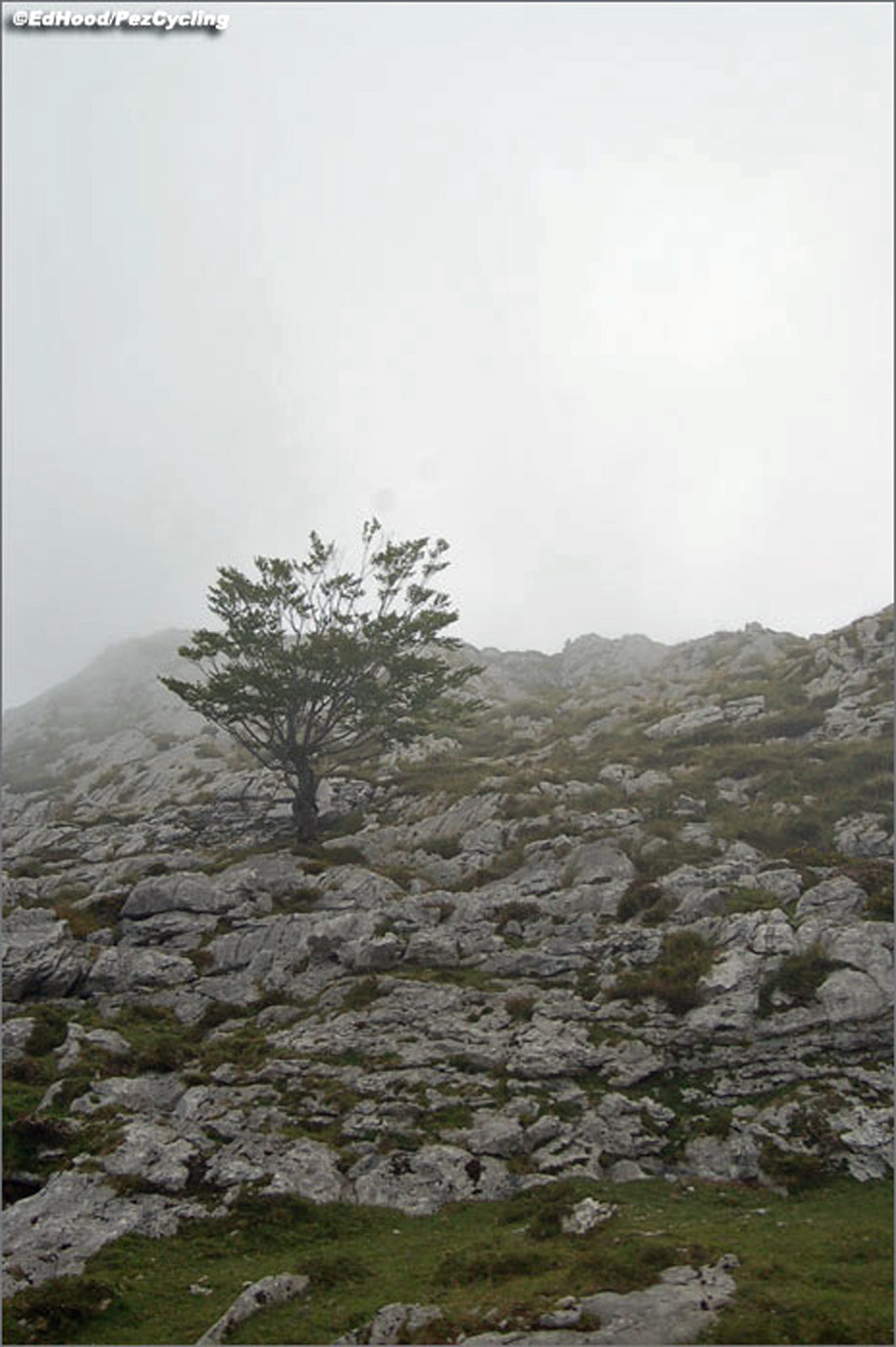 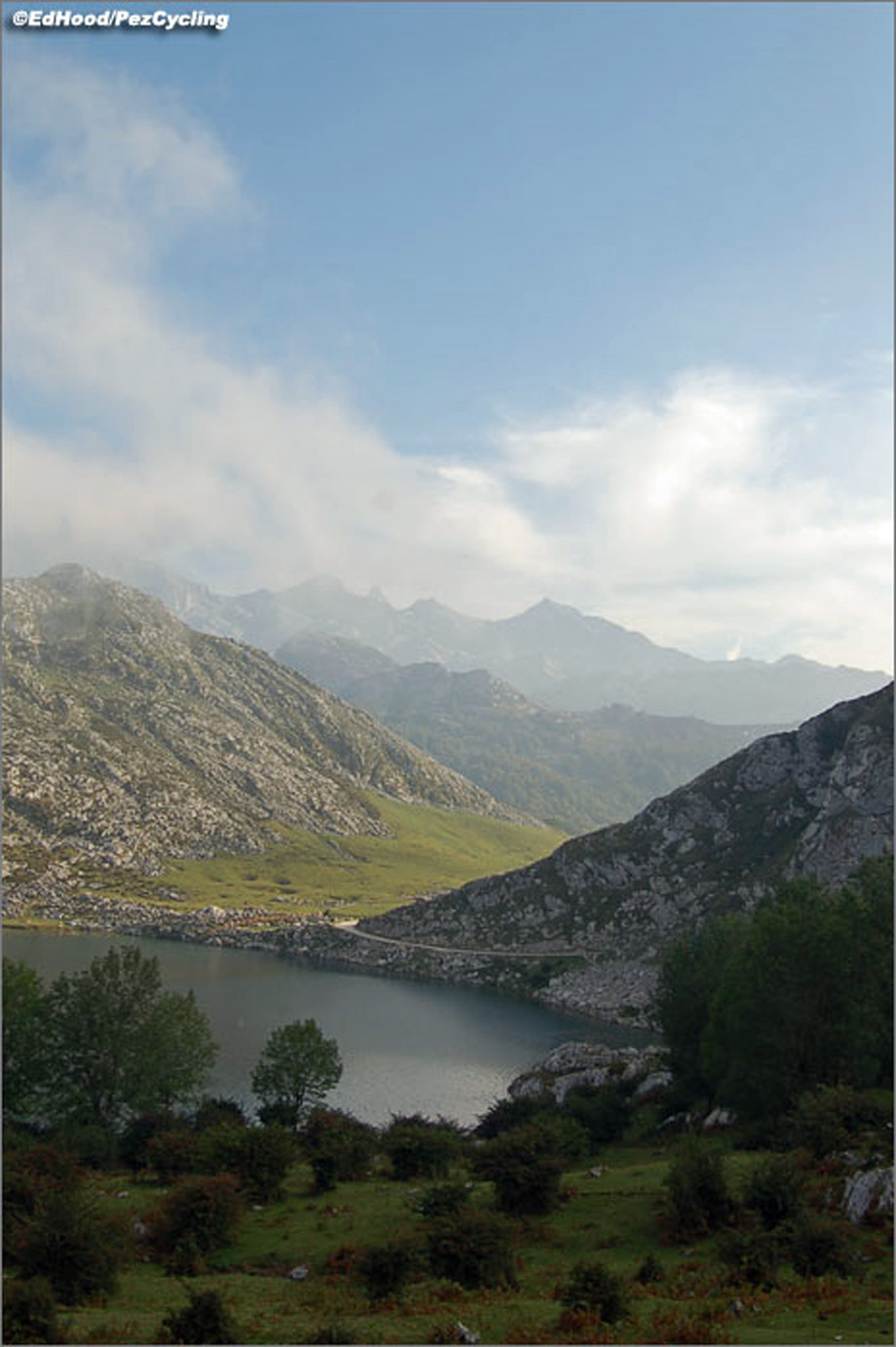 Behind, the Picos de Europa tower, pale grey against a pastel blue sky, looking like a 30’s film set. 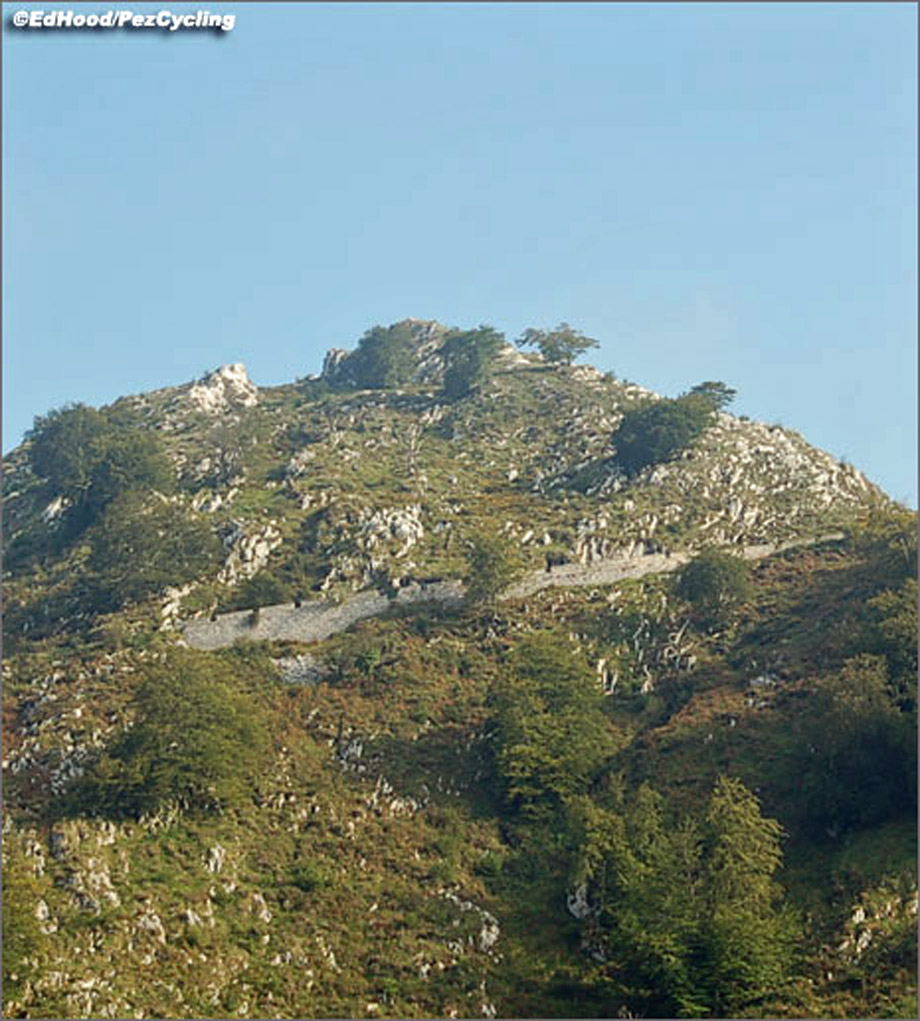 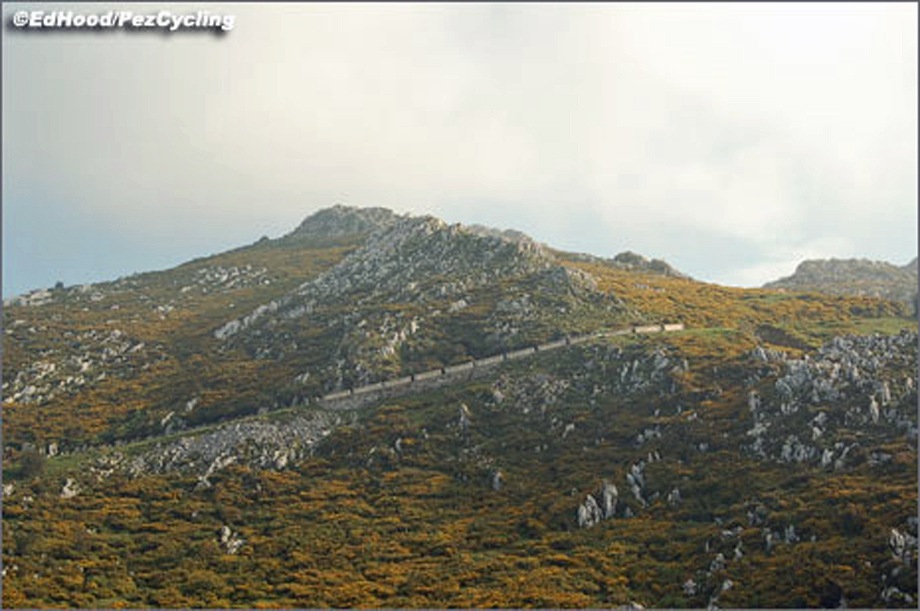 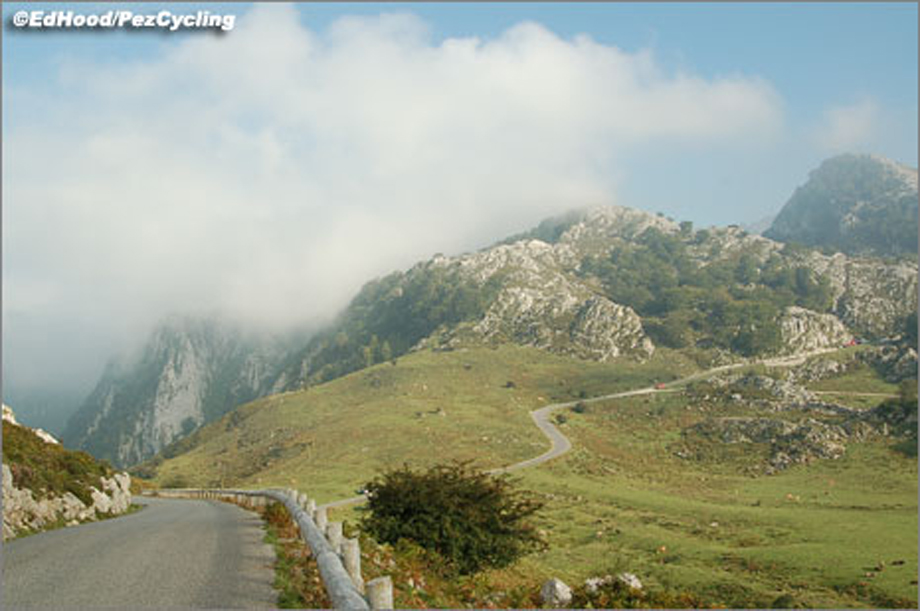 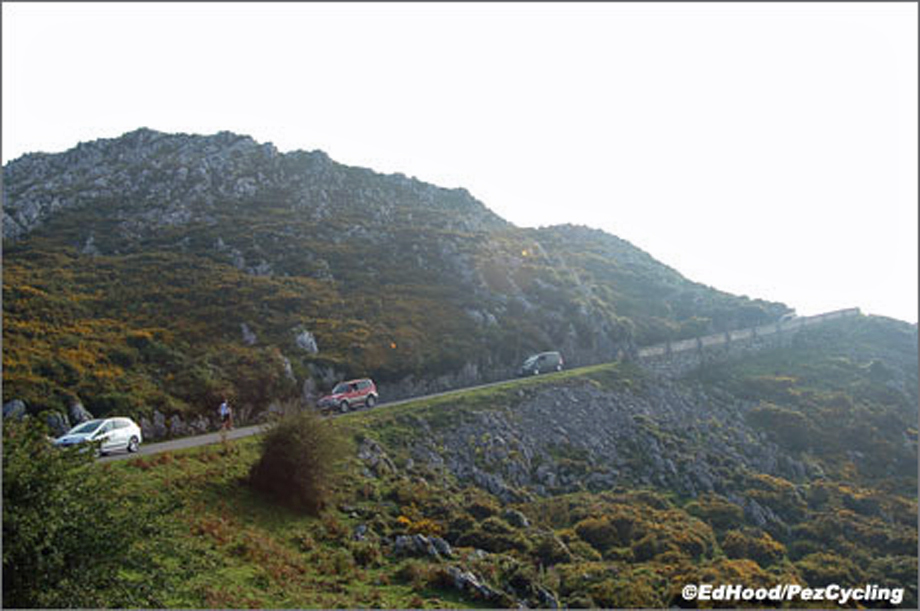 It twists down then rears again to drop again for a good kilometre past the jewel-like waters of Enol – you have to walk to its twin, Ernol. And that’s where we met our girl, her trendy shades and hair looking so out of place among the mist and rock. The final lift isn’t too steep, but tough enough at the top of this monster.

The first time up Covadonga with Lajarreta – Vuelta 1983

The first winner was Basque legend, Marino Lejarreta in 1983 – he even had a fan club in Barcelona in his heyday. If you’re Scots, it’s a special place, Robert Millar won in ’86 on his way to a second consecutive runner-up spot in the Vuelta. Kelme’s Alvaro Pino held him off the top spot in ’86 and in ’85 only a diabolic Iberian combine could help Pedro Delgado to beat him.

# Keep it PEZ for all the Vuelta a España action. # 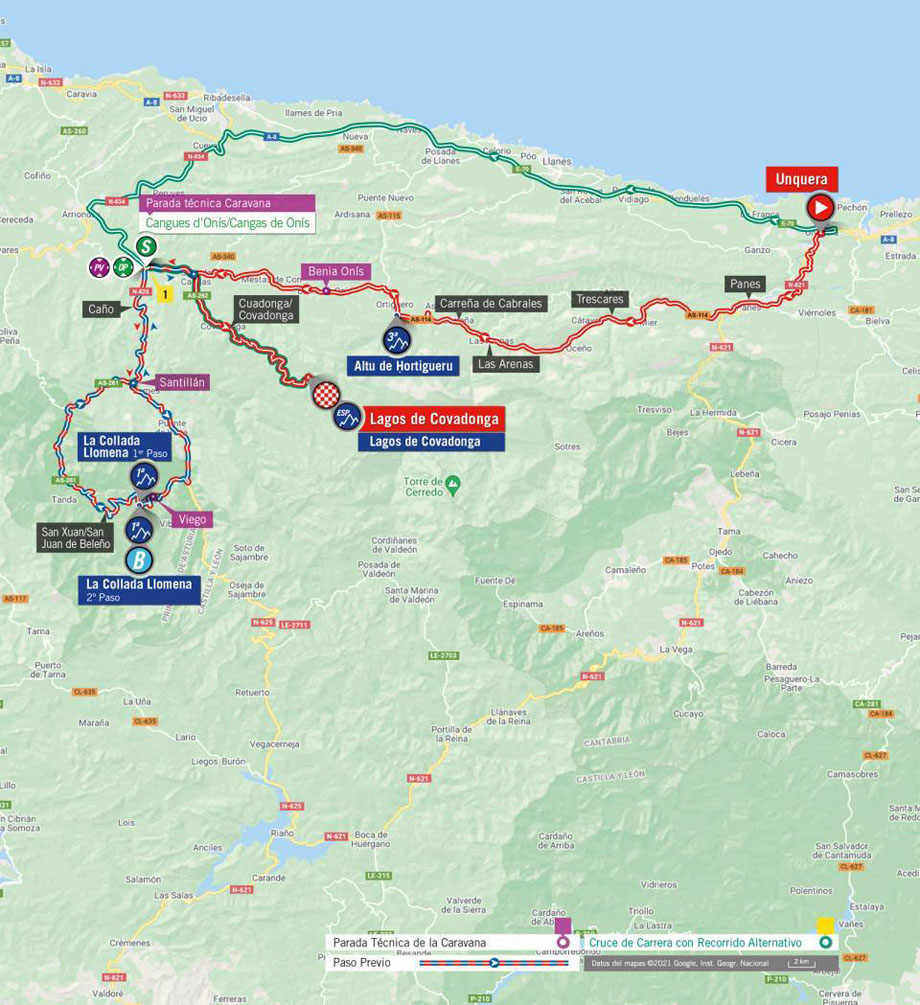