Race report: No messing about from the Swiss time trial machine Fabian Cancellara today. Just when everyone thought Tony Martin had done it again with a time that looked out of sight, the Fabster came steamrollering along to slam his German rival into the dust. Away from their private jousting, however, it was all about the overall contenders.

It’s all about battles within battles today: the overall contenders will come out swinging, looking to land decisive bodyshots, to weaken their Vuelta title rivals in the race to Madrid a week on Sunday. The chrono specialists will be firing hooks and uppercuts, to land a killer psychological blow before the Worlds TT at the end of the month.

From the flag, the road goes up, up, up, but the route profile is not too terrifying, starting at 500 meters above sea level. The course heads south through Torrellos and Los Fayos before hitting the start of the climb at the nine kilometer mark. Then we’re heading for the summit of the third-category Alto del Moncayo at 1090 meters. The climb itself is steady and needs pacing and restraint: nine kilometers at about 4%.

Down the other side, through Lituénigo and Santa Cruz de Moncayo, it’s descending more or less all the way to the line, but with a little kick up between about km 27 to km 31. It’s a good day for a powerhouse rather than a mountain goat.

Early on, Lieuwe Westra has his feet up in the hotseat, but he’s not getting too comfortable – the Vacansoleil-DCM man knows that bigger TT favorites will soon be in da house. He’s nudged off his chair by Astana’s Andriy Grivko who is ten seconds faster.

Fabian Cancellara is off to a fairly restrained start, and is well down (45”) at the first time check. Apparently. But the Vuelta’s time checks are a wee bit questionable today, so I’ve got a salt shaker beside my desk to sprinkle over the dubious split times we’re getting. 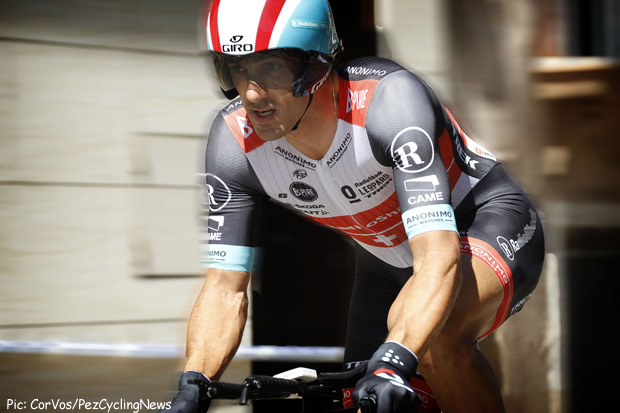 There’s no doubting what happens moments later: Tony Martin, who screamed out of Tarazona like an escaping convict in a 1940s gangster movie, comes smashing home putting a monumental 2’ 35” into Grivko, and today’s result looks done and dusted already.

Martin’s time doesn’t last though. He gets mullered by Fabian Cancellara, a huge 37 second deficit, as the Swiss absolutely Godzilla’s into the closing straightway. Samuel Sanchez (Euskaltel) might have been inspired by the recent purchase of his team’s licence by F1 star Fernando Alonso as he does a very good ride, posting an eventual tenth. Thibaut Pinot is eighth overall, and is putting in a very solid ride for a young climber; he gives away just 2’32” to Cancellara to comfortably stay top ten overall.

Chris Horner is away, in a short-sleeved skinsuit, a resplendent all-red leader’s outfit. The climb is up through trees, sun-dappled, shadowed. Horner dances in and out of over- and under-exposure, the crowds roaring the elder statesman onwards.

Domenico Pozzovivo (Ag2r) comes in just 1’ 24” behind Cancellara which is a pretty astonishing ride from the little Italian climber. The main overall contenders are all doing OK, as Nicholas Roche (in his combination classification skinsuit) and Alejandro Valverde are posting times within hailing distance of Cancellara.

Astana’s race favorite Vincenzo Nibali resembles a relaxed pussy cat on the final drop back into Tarazona. Right paw rested over the left paw, nose tucked in, he looks like he’s sleeping in front of a roaring log fire, but he’s stomping, posting top-five splits along the way.

Cannondale’s Ivan Basso has lost 2’43” to the flying Swiss powerhouse, but it’s not a disaster against the other overall hopefuls. Next up are the Katusha pair Moreno and Rodriguez, and Purito beats his buddy by a minute.

Valverde is in the final meters, hammering the pedals for all he’s worth. He’s fifth so far, 1’52” down on Cancellara. It’s an especially decent ride as he punctured as the Alto del Moncayo unfolded, but there was no panic, a swift wheel change, go. Unlike the debacle in the crosswinds in the Tour de France.

Nicholas Roche is home next, rocking a bit, rolling a little, but it’s surely a career-best ride against the clock as he puts four seconds into Valverde.

Nibali has looked solid all the way, now comes under the red kite, shifts position and back into the tuck. It’s a very good ride from the Italian beating Roche by 23 seconds and looks good enough for the overall lead tonight. 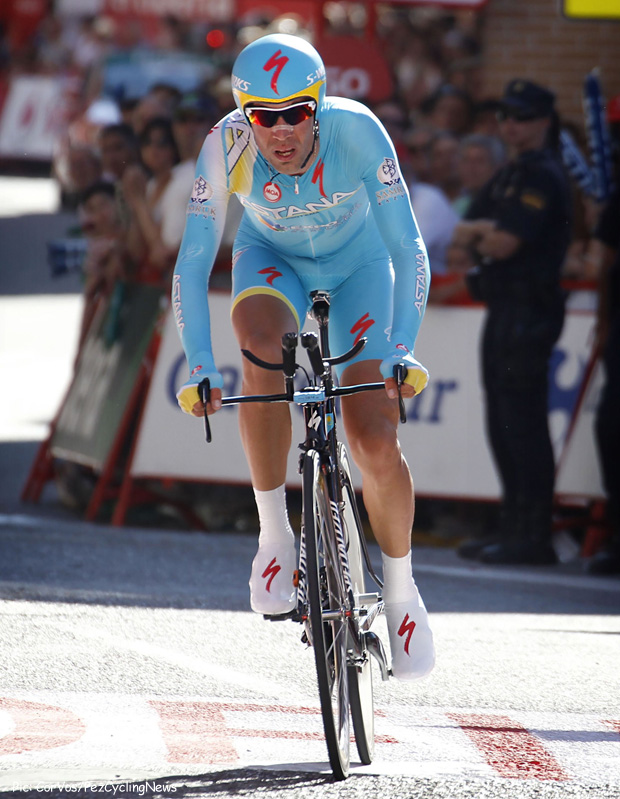 Horner isn’t looking quite as smooth, his head moving as he seems to be looking around a lot. He’s been fiddling with his shoes or shoecovers. Under three kilometers to go and he’s taking a drink. He covers the last two clicks pretty quickly but he concedes 2’54” to Cancellara; more or less a minute-and-a-half to Nibali, Roche and Valverde.

But this is the only individual TT of this Vuelta, so the veteran ain’t out of this by a long shot. Nibali is back in red; it’s like the contenders are using the red jersey to play a super-annuated version of the children’s party game pass the parcel as the leader’s tunic changes shoulders again.

Short and flat tomorrow, one hundred miles and it should (maybe!) be a sprint. We’ll see.