Race report: Yeah, procycling is easy. Romp the Tour de l’Avenir, get a World Tour contract, rock up to the Vuelta and trounce an elite breakaway group. Big congratulations to the super talent Warren Barguil for a perfectly executed stage victory on the stunning Catalan coast this afternoon.

The Argos-Shimano youngster let the more experienced guys watch themselves into a tactical corner and carried out an astute smash-and-grab raid to take a breakthrough win. And here’s how he did it …

From the start in Valls it’s north-east over the thrid-category Coll de la Torreta, which Lampre-Merida’s Diego Ulissi summits first followed by Nicolas Edet and Luis Leon Sanchez, and then gradually east before a big loop out around the finish town of Castelldefels. It’s classified as rolling terrain, and the chances for a breakaway making it to the line are pretty good.

Not making it to the line, unfortunately, are Belkin’s Laurens ten Dam and Pablo Lastras from Movistar who came off worst in an early pile-up. Lastras looked to have broken a collarbone as he sat on the tarmac, his glasses smashed to bits. NetApp’s David de la Cruz was also forced out later on. The first hour-and-a-half or so sees multiple attempts to enter the ‘Breakaway’ night club, but the peloton bouncers on security ain’t got no names on the list. No-one gets in. Nothing sticks.

Inside 100kms to race, NetApp try to put that disappointment behind them as Jan Barta goes on the attack with Reinardt Van Rensburg from Argos-Shimano. They have a tenuous lead before a bigger shoal of fish sweeps into the lead. It’s a decent group, too.

With Meersman in the mix, maybe OPQS will be a bit happier, given he should be the quickest if that group gets to the line. At 70kms to go, the lead is being eeked out over the three-minute marker. Scrambling to make the break are Xabier Zandio from Sky, Christian Meier from Orica-GreenEdge and Vacansoleil’s Tomasz Marczynski.

However, 49kms from home comes the top of the Alto del Rat Penat, a short, sharp kick to the back of the legs. Not quite four-and-a-half kilometers but averaging over 10%, it pitches up to 16% halfway up. On the lower slopes, Lampre’s Scarponi is grinding away at the front of the group. The lead is falling though as Katusha and SaxoBank-Tinkoff Bank put the pressure on in the main field.

The injection of speed sees the peloton stretch out and start to yo-yo. It looks like a Roche/Rodriguez group might be going clear but it comes back together. Scarponi hits the summit with 33” on his erstwhile companions, and 1’ 47” on the main field.

Astana have three men on the front of the peloton with Nibali tucked in safely in fourth spot. They trail by 2’ 25” with 40 clicks to race. The break looks like it’s got a great chance, over a ferocious little bump off the bottom of the Rat Penat and onwards they fly.

20 kilometers left and they’ve got two and a half minutes. FDJ and Cannondale have come to help Astana bring the gap down. It’s a stunning coastal road above a beautiful blue sea; the tarmac sweeps back and fore, carving along the flank of the hillside.

Inside 15 to go and the gap balloons back out – FDJ give up the chase. Today’s winner will be an escapee; they’re still working well under ten to go. The break flies into a small tunnel and Intxuasti goes flying, lands on his behind.

Action up front with 7.5 clicks to race, Mollema, Txurruka and Zandio are trying to chase Jerome Coppel and Egoi Martinez. The Frenchman is head down and driving, Martinez tucked in. In the main field, there’s a tumble exactly where Intxausti fell.

Scarponi drives desperately and gets across to Martinez and Coppel inside five to race; the rest are just seconds back. The escapees squeak round a nasty 180 degree hairpin. Three versus six now, the chasers are almost within reach. Back together with two to go!

Coppel jumps again, Zandio and Barguil get him. Nocentini is there, too and suddenly a gap opens. Now it’s four versus five. 1.3kms to go and Barguil jumps along the barriers … it’s chaos behind him as no-one is able to take responsibility to chase. Mollema is in front, but not pushing.

Barguil is gone, batters his way up the nasty finishing ramp and takes a massive win, at 21 years of age. Pez feels smug … we picked him out as one of neo-pros to watch way back at the start of the season. 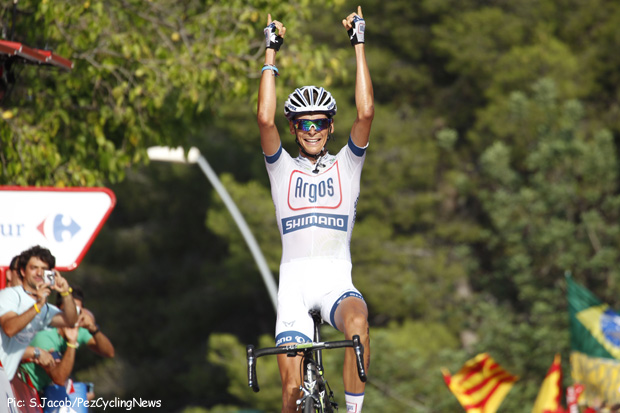 Into the mountains proper tomorrow. Keep it Pez!