Race Report: Yet another crazy day in Spain, this time the weather and the mountains played the biggest part in the final outcome. It was the day for brave riders and the 23 year old Daniele Ratto showed his metal to win one of the hardest days (so far) on this Vuelta.

Stage 14 was a hard day for everyone on la Vuelta, heavy rain and cold conditions decimated the peloton and nearly ruined the TV coverage. A group took advantage of the conditions and built up a big lead on the road to Andorra: First there were five, then three and in the end there was one man on his own fighting the elements for his big win, Cannondale’s Daniele Ratto was the hero of the day, but behind him it was all change, except for Vincenzo Nibali who is still the top man of la Vuelta.

The Stage
Today is the first “proper” mountain day with big Pyrenean climbs on the road to Andorra; three mountain passes to cross before the summit finish on the Collada de la Gallina. First the enormous Special Cat Port de Envalira at 2410 metres altitude will thin the peloton out somewhat. Next two Cat 2 climbs, the Coll de Ordino (1980 metres) and the Alto de la Comella (1350 metres) and then the final climb to the finish line, the Collada de la Gallina (1550 metres) to sort out the top men of this Vuelta.

Gone from the Gun
We didn’t need long to wait for the break to form, Luis Leon Sanchez & Graeme Brown (Belkin), Philippe Gilbert (BMC), Steve Chainel (Ag2r-La Mondiale) and Daniele Ratto (Cannondale) broke away after only 3 kilometres. 12 kilometres later they had over 2 minutes, before the downhill section to La Seu d’Urgell in the valley before the race began the climb to the Principality of Andorra. In the first 30 kilometres the average speed was 54 kph and the lead was 6:44.

At the 35K mark the heavens opened and the predicted heavy rain started, and it was still raining when they got to 40 kilometres out, but the escape had a nice 8 minute lead.

Andorra
After 53 kilometres the leaders entered Andorra to temperatures of 13ºC and the news that at the finish line on the Collada de la Gallina there was a downpour. The lead riders started to climb the 26.7 kilometre Port de Evalire with a lead of over 11 minutes, but after a lot of work by Graeme Brown for his Belkin team mate; Luis Leon Sanchez, he and Steve Chainel were dropped. After 2 hours (79 kilometres) of racing the average speed had plummeted to 38.7 kph, but Sanchez, Gilbert and Ratto had 1:30 on Chainel, 3:20 on Brown and the bunch was at 12:35.

At the top of the Envalira the temperature was 5.5ºC, but according to overall leader Vincenzo Nibali (Astana) the weather wouldn’t be a problem, saying: “I believe my rivals will attack today but I’m not worried. I don’t know the finish in La Gallina, I didn’t see it last year, I don’t want to create more stress. The rain doesn’t bother me either, I usually perform well in these conditions.” Joaquim ‘Purito’ Rodriguez (Katusha) commented: “I did well yesterday, things felt right for me. Today’s stage finishes close to my house. This is MY stage.” Chris Horner (RadioShack Leopard): “If the legs work, I will make up some time in the GC. I would prefer better weather. The finish, although it is not as technical as the other day when I won, is good for making up some time. I’m not thinking about the red jersey; just in pulling back some time.” News from the climb was that Wouter Poels & Lieuwe Westra (Vacansoleil-DCM) and Nick Nuyens (Garmin-Sharp) had retired.

The Highest Climb in La Vuelta
At the top of the Port de Envalira (HC); Philippe Gilbert took the special ‘Alberto Fernandez’ prize and the €1,000 that went with it, behind him it was Sanchez, Ratto, Chainel, Fröhlinger (Argos-Shimano) and Txurruka (Caja Rural-Seguros RGA) in that order. The peloton had pulled the escape back a little to 8:30.

The descent was made treacherous by the rain and cold, Luis Leon Sanchez crashed and although he remounted he eventually pulled out of the race due to hypothermia according to the team, this left World champion Gilbert and Ratto up front. The expected TV coverage wasn’t possible due to the rain. 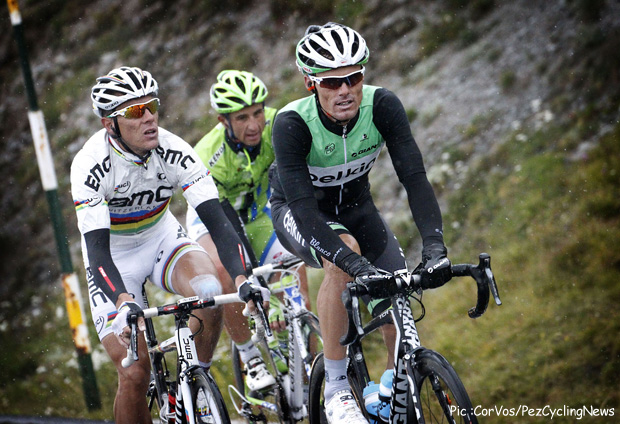 Sanchez leading Gilbert and Ratto before he had to withdraw from the race.

Daniele Ratto didn’t wait for Phillipe Gilbert and had a 2 minute lead after the Ordino and 8 minutes to the group of 8 and 8:40 to the depleted peloton, Alejandro Valverde (Movistar) had lost 35 seconds on the descent and Basso abandoned.

Alto de la Comella
At the top of la Comella with 15.2 kilometres to go, Ratto had 8:39 on the Astana and Katusha led bunch. On the descent Ratto dropped like a very wet stone taking his foot out of the pedal on the slippery corners.

The Collada de la Gallina Finish
Ratto’s advantage through Andorra la Vella was 5:50 minutes on Gilbert and 8:51 on the Red jersey bunch and a further 41 seconds to a chasing Valverde who had five riders with him to get back into contention.

4 kilometres to go and Ratto was still 8:50 ahead of the peloton as he took his rain jacket off for the last ascent of the day. Nibali still had Nico Roche, Chris Horner and Joaquim Rodriguez with him, but Valverde was chasing with only team mate Herrida for help.

Through the rain Daniele Ratto didn’t ease and was looking like a stage winner, behind him it was hard to know what was happening. Nibali had eight riders win him including Horner, Pozzovivo, Roche, Rodriguez, Pinot, Sanchez and Kiserlovski making the pace for Horner.

Kiserlovski put the pressure on for and dragged his team leader with Nibali clear before blowing and sitting up. Horner and Nibali rode clear of the others and caught and passed Philippe Gilbert.

1K To Go For Ratto
Daniele came under the red flag looking tired but confident of his biggest win, as he came into the last 200 metres he had a shake of the fist to his team car and a big grin on his face. Across the line and he pointed to his Cannondale jersey and threw his arms in the air. Horner was the man in charge leading Nibali towards the summit. Valverde was chasing hard from behind, pulling riders back one by one.

Chris Horner led Nibali to the last ramp and then was jumped for second place by the Italian. Next up was Rodriguez by seconds, Valverde had lost time to Horner and Nibali, but had given everything to limit his losses, Nico Roche had been with the top group, but came in well down to drop to 6th overall. 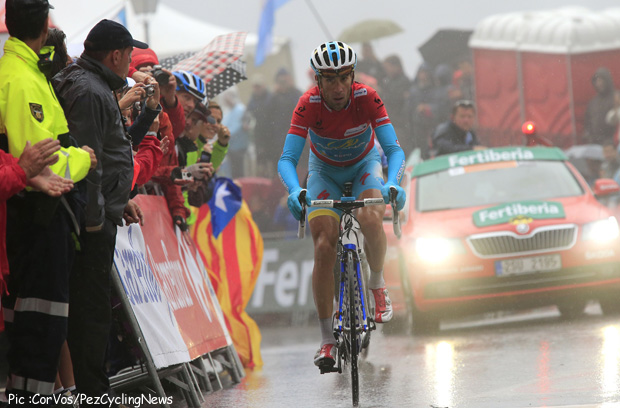 An unpleasant day on the bike for all but a very successful one for Nibali who gained time on all his GC rivals.

A surprise win for Daniele Ratto, but a well deserved one, big winner of the day was Chris Horner who moved up to second on the overall table, in the end Valverde didn’t do too badly and held his third place overall and took the point’s jersey from Dani Moreno. Rodriguez was 4th with Samu Sanchez just behind him. 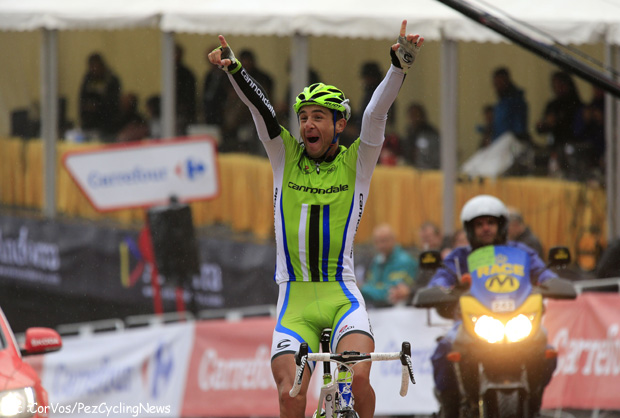 The brave stage winner Daniele Ratto (Cannondale): “The idea was to work for Basso, but the way it worked out was good for me, I’ve been waiting for this for a long time and it’s incredible. I didn’t know Basso had retired. It was very hard today, I prepared for it and I’m very happy.” Ratto also took the KOM jersey.

Keep it PEZ for tomorrows ‘Queen Stage’ into France and more excitement.