Race Report: This Vuelta a España is shaping up to be one of the closest fought Grand Tours for many a year. Nibali had been looking safe in his lead, but now he has that ‘old man’ Horner too close for comfort. The day goes to Vasil Kiryienka though, who took a beautiful stage win on the steepest of summit finishes. Yet more excitement from Spain!

Belarusian Vasil Kiryienka (Sky) fought his way into the early break of the day and when he was ready he launched himself off in the hunt for stage honours and found it at the top of the frighteningly steep Peña Cabarga. Behind him the battle for the GC was getting rough with Vincenzo Nibali and Alejandro Valverde tussling for the best position; the wheels of Joaquim Rodriguez and Chris Horner. Horner was the danger man in the end and rode away like a man half his age to take a further 25 seconds back from the Italian. Just 3 seconds separates Nibali and Horner and on Saturday they climb the L’Angliru.

The Day’s Stage:
Another tough day with five categorised climbs and a summit finish to the Peña Cabarga. The first climb starts 75.3 Kilometres after Burgos; the Alto de Bocos (Cat 3), then the Alto Estacas de de Trueba (Cat 3) after 96.6 K. Next the Puerto de la Braguia (Cat 3) after 122 kilometres followed by the Cat 2 Alto del Caracol 40 kilometres from the finishing summit of the Cat 1 Peña Carbarga. The steepness of the final climb (20% in places) could see riders in trouble, Joaquim Rodriguez won here in 2010 ahead of Vincenzo Nibali who eventually won that Vuelta overall.

The news of next year’s Vuelta a España start was broken by Spanish sports paper AS this morning, they report that the Grand Depart will be in the Cádiz Region of the South West of Spain.

After 30 kilometres they had half a minute lead, by the 35 kilometre mark it was 2 minutes and by 40 kilometres it was 4 minutes. Astana chased at first, then Movistar and eventually Cofidis, but no team wanted to waste too much energy this early in the stage.

The first hour was run off at 43.7 kph and after covering 65 kilometres the break’s lead had grown to a healthy 6:30. The peloton were less than interested and as the race passed through Villacayo after 70 kilometres the lead was 7:22. Villarcayo is the hometown of Iñigo Cuesta who rode 17 Vuelta a España’s during his career.

The Alto de Bocos
At the summit; Amets Txurruka (Caja Rural-Seguros RGA) was first ahead of Mikael Cherel (Ag2r-La Mondiale) and Chis Anker Sorensen (Saxo-Tinkoff) and the lead now stood at 9:40. Next on the menu was the intermediate sprint at Espinosa de los Monteros after 90 kilometres, it wasn’t contested and Sorensen just happened to cross the line first, with Kiryienka and Martinez behind him. At the half way point, with 90 kilometres to go the lead maxed out at 10 minutes.

At the start; RadioShack Leopard’s Chris Horner explained that this would be his first time up the Peña Cabarga, saying: “I haven’t climbed it but my team-mates have, and they have filled me in on it. I could have climbed it training, as I was in Santander for a while.”

Alto Estacas de de Trueba
At the top of the second climb of the day; the Alto Estacas de de Trueba the group were still together, but their advantage had dropped to 8:48 as Txurruka was first followed by Cherel and Sorensen. Today’s finish is perfect for Joaquim ‘Purito’ Rodriguez and said: “It’s an excellent climb for me. It’s very hard. I haven’t won yet but I don’t feel pressure to do so. I think Alejandro Valverde as well as Christopher Horner and myself need the bonuses, so I expect the teams to cooperate to bring us to the climb together.”

Into the third hour of the day and the average speed was 41 kph, both Movistar and Katusha teams came to the front and the lead dropped under 7 minutes as they started the next climb.

Puerto de la Braguia
On the Braguia climb the pelotón raised the speed and with 58 kilometres to go the lead was down to 5:40. Again it was Txurruka ahead of Cherel and this time Adam Hansen was in third at the top of the climb and the lead was 4:35.

Alto del Caracol
NetApp-Endura started to help Movistar in the bunch as Vasil Kiryienka (Sky) attacked the break. Simon Clarke (Orica-GreenEdge) and Adam Hansen (Lotto Belisol) went with him at first, but another burst from the Belarusian saw him go solo. Alejandro Valverde had four of his Movistar men on the front which shook a few riders out the back, most notably the KOM; Nicolas Edet (Cofidis).

At the top of the Caracol; Kiryienka was first Egoi Martinez, Chris Anker Sorensen and Angel Vicioso chasing him, all the others from the break where dropped and being hoovered up by the bunch. 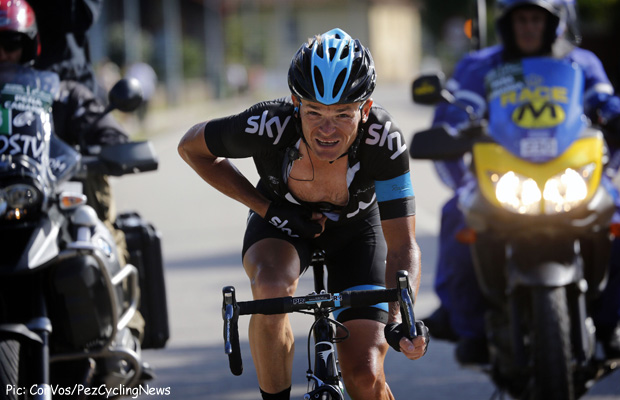 On the descent Kiryienka pushed on not allowing Martinez, Vicioso and Sorensen to get near him and he pulled out a lead of 32 seconds on them with 28 kilometres to the finish, he also had over 6 minutes on the peloton and was putting more time into everyone over the undulating roads towards the final climb of the Peña Carbarga.

20 kilometres to go and Kiryienka was getting near to a minutes lead on his three pursuers, Movistar had put five riders in front of Valverde, but they were not making a dent on the lead.

Sorensen, Vicioso and Martinez were joined by Txurruka, Kohler and Van Rensburg as they came into the last 15 kilometres. Kiryienka wasn’t slowing down and had more than 1 minute on the six chasers and 6:08 on the peloton with all the star riders getting ready for the final battle.

Under the 10K to go banner; Kiryienka had powered to a lead of 1:31 on the chasers which now had Hansen and Clarke along for help, but the bunch had closed to 5:50.

The Summit Finish to the Peña Carbarga
5.8 kilometres to go and Kiryienka hit the first 9% ramp of the climb, the eight chasers had lost more time to 1:42. Chris Anker Sorensen could see the others were not pulling their weight and set off on his own after the Belarusian. Sorensen’s move galvanised the others into action and the chase was on again behind.

RadioShack Leopard took control of the peloton for Chris Horner stretching the main group into one line as they hit the climb at 4:58. Nibali was glued to the rear wheel of Horner, Valverde and Rodriguez were on their shoulders ready for the inevitable jump. 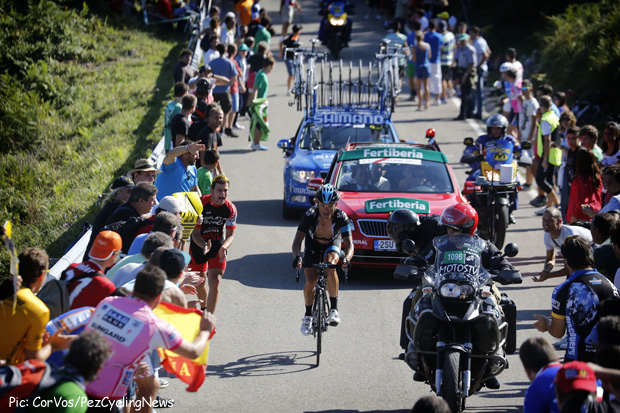 Into the last 2 kilometres and Kiryienka still looked comfortable on the steep, steep climb as it hit the 17% section and then onto the 20% under the 1K banner. The bold Vasil Kiryienka showed no weakness to cross the line for a very brave stage win.

In the bunch Katusha was at full speed with Rodriguez in the best position, Nibali and Valverde were fighting for the wheel of ‘Purito’ but Valverde lost out losing a couple of lengths but fought back. Horner moved forward to take the lead and try to get the gap on the others; and then he was away. 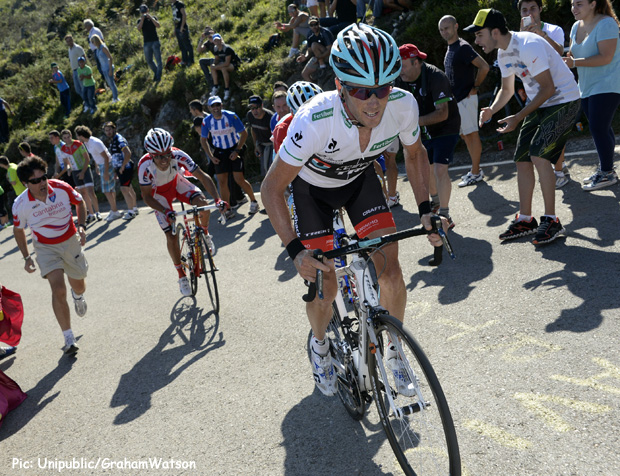 On the steep finish Horner gave it his all to cross the line 1:53 behind Kiryienka, but the important time was back to Nibali. The clock ticked on and Rodriguez, Valverde, Nibali and Roche came in with only small gaps between them.

Nibali slumped over the line, but the Italian had done enough to keep his overall lead by a slim 3 seconds over Horner, 1:09 on Valverde and 2:24 to Rodriguez. It can’t get much closer.

Keep it PEZ for the weekend Vuelta excitement.