Race Report: Stage 18 took in the final climb twice, but it only took the young Italian Fabio Aru once to get a gap on the other Vuelta GC hopefuls. Chris Froome joined him for them both to prosper. Stage for Aru, 2nd overall for Froome.

With the ‘Three Amigos’ all watching each other it was the young Sardinian rider Fabio Aru (Astana) who took advantage and soared away to victory on Stage 18. The surprise though was that the man who is getter better by the day, Chris Froome (Team Sky), managed to attack the others, get across to Aru and so very nearly take the stage. He certainly took second spot overall and will fancy having a go at getting one place higher.

Nearing the End
As this Vuelta draws ever closer to Santiago and the final stage, and with the Top-4 positions still too close to call, a clearer picture has developed for those who now no longer have a chance of the overall, or even a stage.

There was a growing list of non-starters and abandons as Stage 18 got underway. With only mountainous stages and a very short time trial left Fabian Cancellara (Trek Factory Racing) and Tom Boonen (OPQS) decided to pull down the curtain on the last of this year’s Grand Tours. This gives them a bit of time to prepare for the upcoming Worlds and in the case of Boonen, now that he no longer had to work for Rigoberto Uran (OPQS), there was nothing really keeping him in the race.

Robert Gesink (Belkin) also didn’t start as he cited a personal family issue that saw him fly home. We’ll respect his privacy; it’s enough to say that everyone here at PezCycling wish him and his family the very best. Cameron Meyer (Orica-GreenEDGE) has been providing sterling service for Michael ‘Bling’ Matthews, but the effort has cost him and he’s also left to recuperate. Out on the road and Koen de Kort (Giant-Shimano) pulled over after 30km and called it a day.

Winning Formula
Today’s stage from A Estrada to Monte Castrove en Meis was 157km with all the action likely to come at the end. Climbing away from Pontevedra after 120km the race would climb the 2nd Category Alto Monte Castrove only to come down into the valley for the second intermediate sprint and then do the climb again. Second time up and they would finish 700 meters after the summit on a slight downhill section so if anyone was away they would have to hold on over the top.

Race tactics within the peloton are often difficult to work out for those watching and how one group of riders is allowed to get away while another isn’t is cause for some discussion. Group after group tried right from the flag with a 9-man break led by Jesse Sergeant (Trek Factory) looking likely until Lotto Belisol decided against it and dragged the bunch back to them.

Next to go was Johan Le Bon (FDJ.fr) who tried on his own but Movistar soon ended that attempt. Not to be put off Le Bon went again this time taking nine others for company including Philippe Gilbert (BMC) and with Jonathan Castroviejo (Movistar) along for the ride they were hopeful that they might be allowed to leave. Not so as they were pulled back after 50km of racing. Because of the chasing the pace was very high and everyone was hoping that the next group to form would be the break of the day. 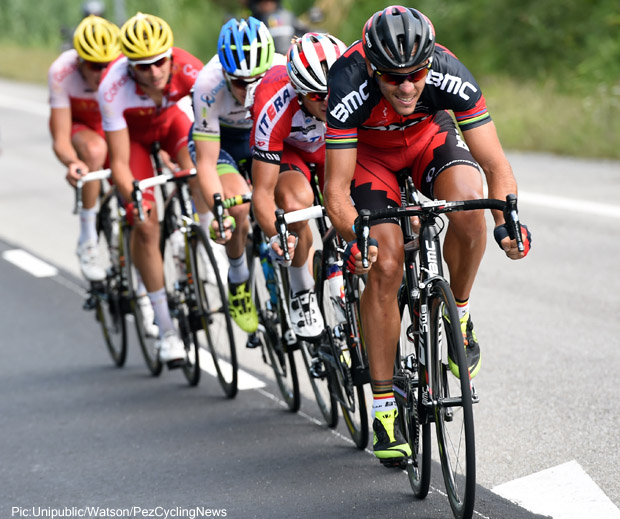 Philippe Gilbert gave it a go at one point

It was Le Bon again who went taking Luis Leon Sanchez (Caja Rural-Seguros RGA) and Hubert Dupont (AG2R-La Mondiale) with him and this time it worked as the peloton eased back and let them go. Movistar though was working to keep the gap within reach at around the 2-minute mark as Valverde (Movistar) was probably thinking about attacking Chris Froome (Team Sky) and securing the second top step of the podium. A small local protest was held at the start around the Movistar team bus as a group supporting the local rider Alejandro Marque sought to make known their feelings about the team they dubbed ‘Mafiastar’. Marque was due to sign for Movistar when it was announced that he had tested positive for betamethasone and although he ultimately wasn’t sanctioned, Movistar opted to drop him. The protesters surrounded the team bus and shouted “Vodafone, Vodafone!”

Blue Spotty Jersey
With the three riders still out front it was Luis Leon Sanchez who had most to gain. With Movistar keeping the gap to two minutes it was unlikely that they would be able to stay away all day but if Sanchez could be the first over the Alto Monte Castrove on its first ascent he would bolster his 23-point lead in the climbers competition. As he moves back to the WorldTour with Astana next year it would be nice to take a major jersey with him…and to thank Caja Rural who gave him a place after Belkin dispensed with his services last year.

With the foot of the climb fast approaching, teams were moving up to the head of the peloton. Astana was there for Fabio Aru, Sky was there for Froome and Katusha was there for Purito. Moving out of Pontevedra the bunch was stringing out and the gap was coming down with the leaders now at 40 seconds and with the cars being pulled out it looked as if they wouldn’t make it to the top of the first ascent. Sanchez realized it might not happen as the peloton was ignited by Adam Hansen (Lotto Belisol) trying to jump away. 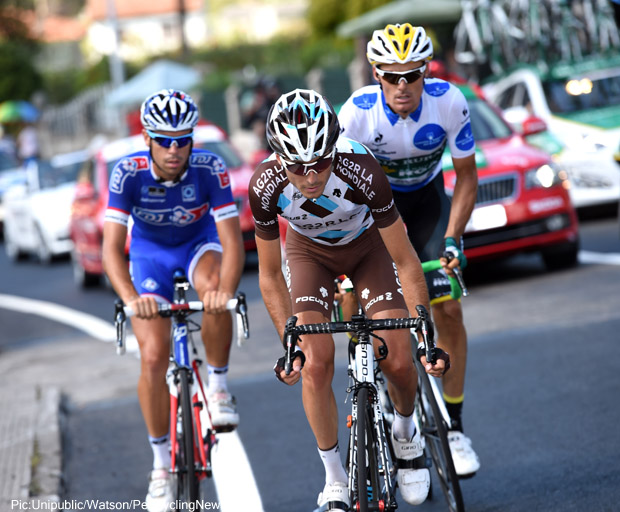 The eventual break of the day

This is probably why Lotto was keen not to let the early group get away as they had planned something for Hansen but with Tinkoff-Saxo now appearing at the head of the bunch it wasn’t looking good for the Australian.

First To Go
With the three leaders still ahead by 30 seconds, and Hansen back in the fold, there was a flurry of attacks off the front. Alberto Losada (Katusha) and Guillaume Levarlet (Cofidis) joined up and tried to bridge across to the trio up front. Sky was now riding tempo at the head of the peloton as they sought to keep the pace high in the way that Froome prefers. First rider behind the Sky line was race leader Alberto Contador as he’s still wary of Froome’s abilities to get better as this race goes on and he still considers him a major threat.

With Sanchez keen to make something of the long breakaway he was forcing the pace on the climb and began to pull ahead of his former companions. The bunch had swept up Levarlet and Sanchez was pushing for the summit and the points that went with it. He distanced the others with Le Bon having been dropped and he took the first passage through the finish line with a 11 second lead over Losada and Dupont. The Sky-led bunch was just 18 seconds behind him but Sky’s increase in pace had seen the main group whittled down. 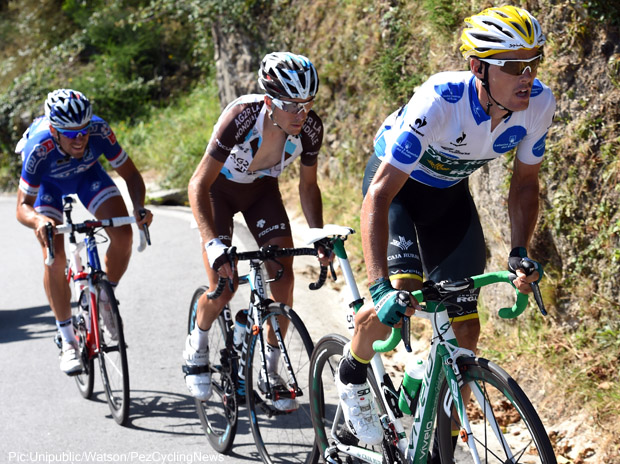 Luis Leon Sanchez was after those KOM points

Job done for Sanchez he sat up and gave Losada and Dupont a meaningful look as they passed him and started the descent. And then they were all together and Sky led the bunch down the mountain in preparation to do it all again.

Froome The Sprinter
With Movistar driving alongside Sky the smart money was on the Spanish team leader jumping out and grabbing the bonus seconds on offer at the intermediate sprint. With numerous banners across the road, there was a bit of confusion on where the actual line was but Movistar led out the sprint only to see Chris Froome grab second spot and the two seconds that went with it. Valverde was nowhere to be seen and was maybe biding his effort for the second ascent of the climb. 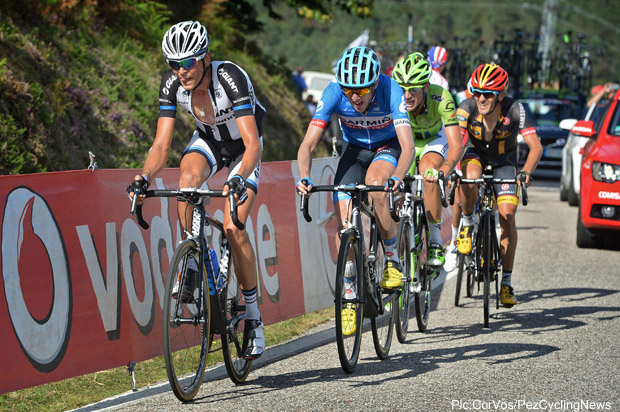 Warren Barguil (Giant-Shimano) put in some strong attacks, but in the end had to chase the top guys

Final Ascent
Onto the climb and Christophe Le Mevel (Cofidis) jumped away with Sergio Paulinho (Tinkoff-Saxo) quick to get across to him. This produced a massive move as Alessandro De Marchi (Cannondale) and Paolo Tiralongo (Astana) gave chase only to be hunted by Katusha with Contador and Froome in close attendance. Froome was having no trouble handing the initial change of pace and the one who looked to have missed out was Valverde. As usual he was back on quickly though as Katusha pushed again with Contador sticking closely to Rodríguez’s wheel.

Warren Barguil (Giant-Shimano) sensed a lull in the pace and shot off the front but Katusha worked to bring him under control. Barguil went again and took Jerome Coppel (Cofidis) with him and when Barguil pulled over, Coppel kept going opening up a gap. Next to launch the race-winning attack was Fabio Aru as he took off in an attempt to take the stage.

Froome The Climber
Aru was quickly across to Coppel and immediately dropped him as Rodríguez made a searing attack back in the group and took the other main men with him. Valverde was there with Contador and today Froome was easily handling the change in pace. As they closed on Aru, Froome attacked the others, ripping away from the Three Amigos and they had no answer. Contador wasn’t worried choosing to watch Valverde and Rodríguez. Valverde, as ever, wanted someone else to do the work and eventually Rodríguez decided to take it up. 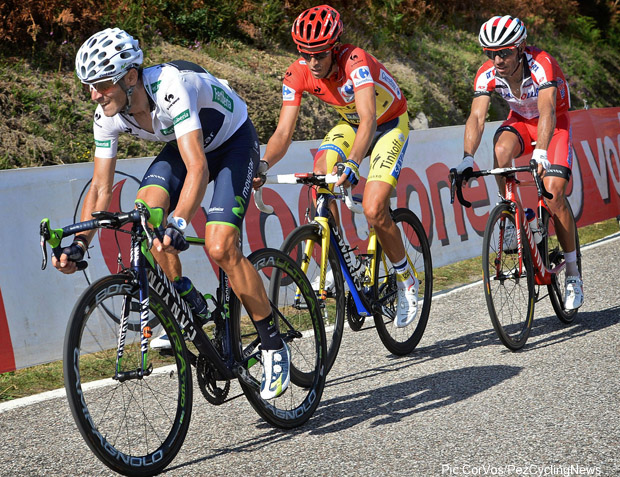 Up ahead Froome had joined Aru and was striking out for the summit and the stage. As they crested the mountain top they had 10 seconds over the chasers and Valverde finally slowed insisting that Contador do some of the chasing. Contador took up the running over the final downhill 700 meters before the line.

Froome wanted the stage win to give Sky a victory but he was no match for the young Sardinian rider and Aru came around him to get the win. The three Spaniards were fast closing on the line and Valverde took the sprint for third spot and the bonus second that went with it. 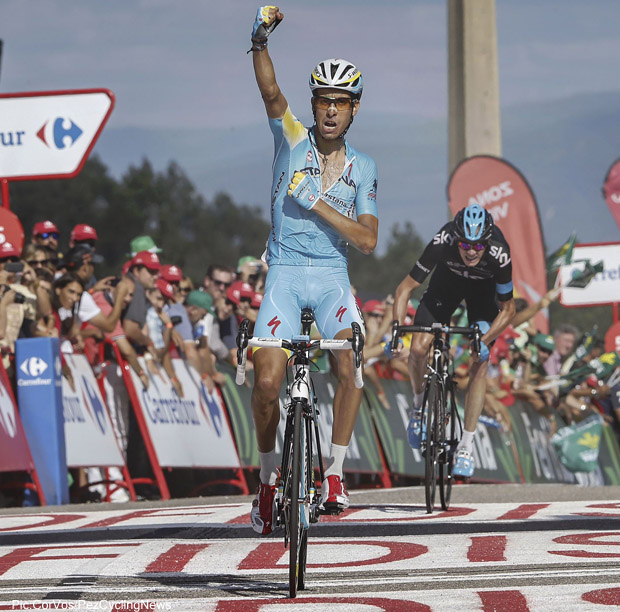 Aru got the better of Froome for the stage win, but moving 13 seconds ahead of Valverde must feel nice

Chris Froome will hope he’s secured second place in this year’s Vuelta by today’s bold attack but he may still fancy his chances of taking top spot. Alberto Contador has always said that Froome is his main rival and he won’t be happy until the finish in Santiago on Sunday. The day belonged to the talent that is Fabio Aru though and he showed the cycling world that he’s one of the new crop of hot young riders, taking the old order by storm. The man to lose out was the ‘Mafiastar’ boss Valverde and there might have been some cheers back in A Estrada with the supporters of Alejandro Marque!

Keep it Pez for the final stages.