Race Report: A wet and tricky 9.7 kilometer time trial greeted the Vuelta peloton in Santiago de Compostela. The stage went to the Italian TT specialist; Adriano Malori, but all eyes were on Alberto Contador as he fired his gun of victory.

It was the final day’s pilgrimage to the finish point in Santiago de Compostela and only a major mishap could change the course of history. Alberto Contador (Tinkoff-Saxo) was on course to take his third Vuelta victory but he wasn’t about to acknowledge it until he crossed the finish line today. He had to negotiate a tricky, short time trial on what proved to be a very wet day and he was taking no chances.

Into the final kilometer of yesterday’s stage and Froome (Sky) must have realized it was all over. There was speculation that Contador would gift the stage win to the Sky rider but, hey! This is the modern era and a win’s still a win. There were bonus seconds on the line and the ever-careful Contador would not accept this race was won until he rolled across the finish line in Obradoiro Square in Santiago de Compostela, the end of the centuries-old pilgrimage route in honor of Saint James.

Froome can take heart that he’s done his reputation a world of good in this race. There’s always been something about him, which has left a lot of fans feeling a bit distant. We’re not sure what it is; he’s a great racer, he’s gracious and congratulatory towards his opponents and he makes himself available to the media. The issue in the past can only be attributable to one rider, and a teammate at that. Whatever went on behind closed doors in Sky Towers between him and Sir Brad perhaps we’ve only ever been told a small portion of it. Maybe in twenty years some hotshot journalist will come out with ‘Slaying The Modfather’ and we’ll finally know what promises were made and which ones were broken. Either way, he’s endeared himself to a whole new legion of fans with his never-say-die attitude in this race and his gracious behavior towards his adversaries.

As good as Froome’s been, there’s one man who was a match for everything that the others could throw at him; a man who made a remarkable comeback from his leg injury and an even greater comeback to the top level of the sport. This Vuelta win will go some way to restoring the confidence and reputation of quite possibly the greatest stage racer of the modern period. The quiet man from Pinto has come back from life-threatening illness, betrayal by a former manager and teammate, a controversial drugs conviction and loss of hard-won victories, vilification by the former ruling elite of the UCI and a fight to get fit after a serious fall in the Tour. What Contador has done in this race should not be underestimated and it can only set up the biggest match possible next July when he will hopefully face Nibali, Quintana, Valverde, Froome and Purito and the new young guard of Pinot, Bardet and Aru in the 2015 Tour de France showdown at Utrecht.

But he still had to win this Vuelta and to do that he had to make sure nothing went wrong today. Here’s how the stage played out.

Floodlit Start, Floodlit Finale
Just as the organizers decided to hold the TTT in the evening back in Jerez so they had decided to finish this year’s race in the same manner. In Andalucía the battle had been against the searing heat but here in Galicia it was to provide a spectacular set piece to end of the three week-long pilgrimage around Spain.

In reverse order of the general classification it was last man in the race Andrea Guardini (Astana) who was first away and would be the first man to finish the 2014 Vuelta. It was expected that the early benchmark would be set by the third man away Jimmy Engoulvent (Team Europcar) and so it proved with a time of 11:30. This was good enough to hold the top spot for 40 minutes until Jesse Sergent (Trek Factory Racing) bettered it by 10 seconds.

Competitions Still in Play
With a lead of 1:37 over Froome, the Red Jersey would have been able to change bikes, have a couple of punctures and maybe stop for a café cortado and still win the race but John Degenkolb (Giant-Shimano) had no such luxury in the Points Competition. With 25 points still to play for there was a possibility of losing the jersey to Contador or Valverde. In the end, the popular German rider would run out the victor in that competition. 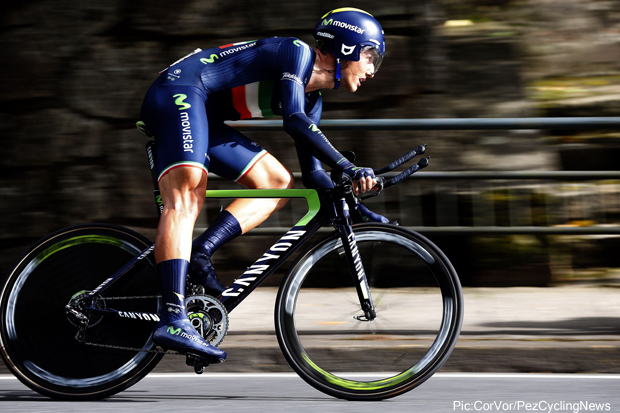 The time of Sergent was bettered by the Italian TT champion Adriano Malori (Movistar) who brought the target down to 11:12.

One rider who really fancied his chances was Rohan Dennis (BMC). The Commonwealth Games TT silver medalist was aware that many of the big names of world time trialing were no longer in the race. However, Chris Froome would be keen to get Sky that elusive stage win but with the rain beginning he may well opt to take a more careful approach and safeguard his second place overall.

Ultimately it all went wrong for Dennis as he crashed at the finish line and could only post a time of 11:21. He was well up at the split but couldn’t hold it on the slippery roads. With the wet conditions it was looking good for Malori but there was still time for things to dry out a bit.

Luis Leon Sanchez (Caja Rural-Seguros RGA) was on the road in the blue-spotted mountains jersey and although he is a past national TT champion he was never going to challenge for the stage win today. The Mountains prize is sewn up and he’s back in the WorldTour next year.

A rider likely to be announcing his retirement in the coming weeks, Cadel Evans (BMC) had started what was likely to be his last Grand Tour stage. In contrast, another Australian, Adam Hansen (Lotto Belisol) was sporting a specially designed rear disc wheel to celebrate his 10th consecutive Grand Tour and was happy to finish this one with a win in the bag already. 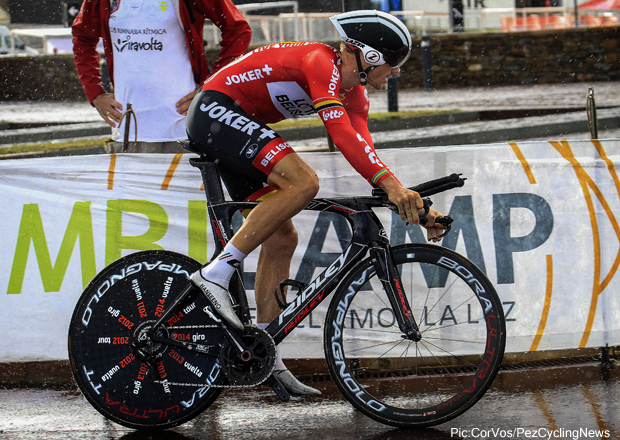 The Last Thirty
Into the last hour and the riders were now setting off two minutes apart. The rain was coming and going but no one was getting close to the time of Malori. The organizers had actually shortened the route by 50 meters for security reasons, most likely to avoid the cobbles that were now treacherous…good call.

Big names were going through the motion of getting around the course but nobody was getting anywhere near Malori. Ryder Hesjedal (Garmin-Sharp) finished 2:12 down on the Italian, which showed how tricky the route now was.

For some riders this Vuelta was going to be a sobering experience. Joaquim Rodríguez (Katusha) joked that he’d have to win the TT to avoid leaving his home tour empty-handed for the first time since 2010…and that wasn’t very likely to happen. If Chris Froome couldn’t take the stage then Sky would not have won a Grand Tour stage in 2014 but his second place overall, and Sir Brad’s TT win this morning in London, would be suitable compensation.

The weather was beginning to dry but with the sun setting it was almost certain that the late starters would still struggle with the wet conditions. Dario Cioni, DS of Team Sky, confirmed that his man Froome would not contest the stage, opting to protect his overall position.

17 Seconds In It
With the top men warming up it looked as if the biggest fight would be between Samuel Sanchez (BMC) and Dan Martin (Garmin-Sharp) as they were only separated on GC by 17 seconds. It would be a big ask for the Irishman on such a short course but not impossible as they fought for 5th spot overall.

Next off was Fabio Aru (Astana) and he was taking no chances through the twisting start. He has two stages on this year’s race and is among the new wave of cycling superstars.

Valverde (Movistar) and Froome were chatting as they waited in the start house. As Valverde went off he was looking faster and more concentrated than most. As Froome waited for the countdown, Contador was having some last-minute adjustments done to his bike and then it was off with the jacket revealing his Red skinsuit.

The starter waved him away and he spun his disc on the slippery ramp as he powered away with around eleven minutes of racing before he would be confirmed as this year’s winner.

Damiano Caruso (Cannondale) was at the finish 17 seconds ahead of Daniel Navarro (Cofidis) and protected his 9th spot overall. 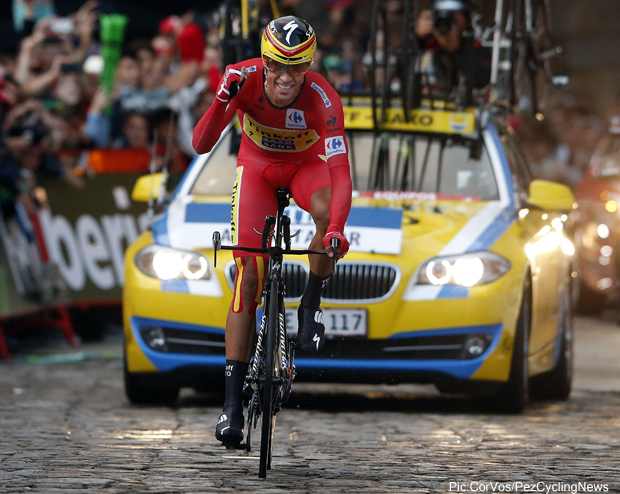 Contador was measuring his effort, in and out of the saddle, as Froome put in huge bid to take the stage, maybe despite what his DS had said. Sanchez had finished and protected his GC position from Dan Martin.

Rodríguez had finished and now it was the turn of Valverde to come home in a respectable time. Froome was under the red kite but was already outside of Malori’s time. He finished in 12:25 with only the Vuelta champion-elect to complete the course.

Contador was taking no chances and was slower than Froome but he had time to play with. A wall of sound drove him home and as he rounded the final turn he raised his arm in victory. This must be the sweetest of wins for the Spaniard, to come back from all the challenges that have thrown at him. Malori had taken the stage win but all eyes were on the Spaniard.

Surrounded by the media he could now acknowledge his 3rd Vuelta win and his 6th Grand Tour victory, although he still considers himself the moral victor of the races that were taken from him. That debate might continue but the shy ‘Pistolero’ has proved himself to be the best stage racer in the world. 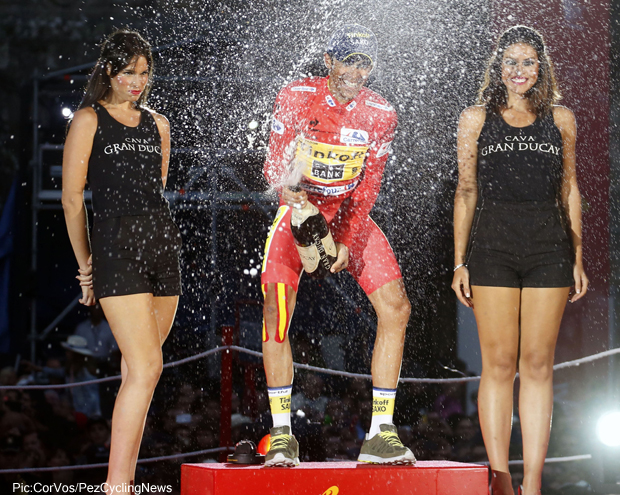 Standing in front of the cathedral in Santiago de Compostela, Alberto Contador took the applause of the crown and received his Red winner’s jersey. A worthy victory for a man who has overcome a lot this year.

Keep it PEZ for all the reaction and rider comments in EuroTrash Monday.