Race Report: A day that started on a battle ship ended with a battle of a different kind as the riders took on a difficult almost 200km long stage under scorching summer heat. With a short climb coming right near the end of the stage this would be a day that would keep you guessing right until the final meters. 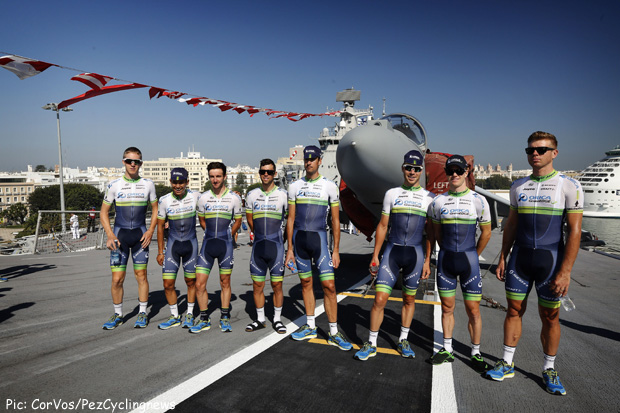 Orica-Greenedge – ready for the battle ahead

Stage 3 – Sprinter, GC Man Or Break?
Coming into today’s stage all the talk was not about the crazy start on an aircraft carrier but on who could win the stage today, a GC man, a breakaway or even a sprinter? 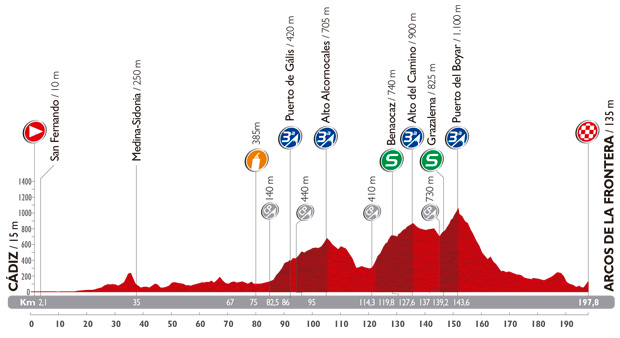 A stage profile that had everyone guessing…

Many thought that the final hill would prove too difficult for the sprinters and it would be a GC man, others thought the stage perfect for the likes of strong sprinters like Peter Sagan, John Degenkolb and Michael Matthews who are good climbers and then others again thought that even yesterday’s winner Nacer Bouhanni could make it over the 1500m long climb near the end of the stage at 6%.

The quintet immediately started working well together and they quickly built their lead up to over 8 minutes after 50km of racing. It was then at this point that teams that were interested in an uphill sprint finish started coming to the front to reduce the gap with Orica-Greenedge taking a keen interest in the chase for their man Michael Matthews. If he were to win today then there would be a strong chance to take the leader’s red jersey thanks to the 10 second win bonus just like he did at the Giro earlier this year.

The Mountains Arrive
As the break came upon the first climb of the day, the alto del Picacho their lead had dropped to five minutes thanks to the chase from Orica-Greenedge but the break seemed more concentrated on the mountains points than keeping their lead as one of the five riders would be wearing the Mountains jersey tonight thanks to the points on offer in this stage. It was Jerome Coiusin who took maximum points on the first climb stating his intentions loud and clear that he wanted to be that man on the podium tonight.

Meanwhile their gap had dropped to under four minutes as they approached the second climb, the alto Alcornocales where Cousin once again took maximum points. With 70km to go and their lead hovering just above two minutes it didn’t look good for the break when Luis Mas Bonet took a solo flyer in a brave or perhaps just crazy effort. Great publicity for his team of course and extra mountains points for him but the chance of him winning the stage were next to zero. No matter though he forged ahead and the rest of the break couldn’t respond. Fumeaux was dropped and the solo Spaniard Bonet had now increased his lead over the peloton to over 4 minutes and more than a minute over his three former companions.

The Peloton Chases
Orica-GreenEdge continued to chase the break with a two-fold strategy: a) Bring back the break & b) Keep the pace high enough to put the other sprint rivals in difficulty. Their tactics seemed to be working with the likes of stage favorites Peter Sagan and Fabian Cancellara both seemingly in trouble in the heat and hills but they weren’t completely dropped and managed to just hang on.

The chase did bring the 3 breakaway riders of Cousin, Wyss and Van Rensburg back into the fold though and it was now just Bonet out the front alone and with 40km remaining he had a lead of 2 minutes.

All Together
With 25 kilometres to go Bonet was finally caught but he was a happy man waving to the cameras as he would be again less than an hour later accepting the KOM jersey on the day’s podium.

It was now time for the peloton to prepare for the tricky finish. FDJ had come to the front for Bouhanni or perhaps for Anthony Roux, Orica-Greenedge still had men up the front too but they were rolling along at just a steady pace when Adam Hansen decided to make a move with 13km to go – would 13 be lucky for Adam?

With 11km to go Hansen had built up his lead to 23 seconds and it was still Orica-GreenEdge doing the work trying to bring back their fellow countryman. They weren’t making much headway though and it was at the 10km to go banner that Sky took over the chase and the gap dropped immediately to just 13 seconds. Sky and the other GC teams weren’t overly concerned by Hansen they were actually just trying to get their GC men into the best position as at 2.6km to go there is a narrowing of the road to cross a bridge and it could prove to be the crucial point of the day.

A Hectic Run In
Unfortunately for Hansen this jostling from the GC teams meant his solo bid was over and the race was now almost at the bridge. Garmin, Sky, Movistar, Tinkoff-Saxo and more were all in a battle of positioning and the speeds were very high leading into this infamous bottleneck.

Luckily for all involved, despite the extremely high speeds and the numerous corners leading into and out of the bridge all riders passed through safely and it was now time to hit the final rise on the way to what was surely going to be a very tough sprint.

Giant-Shimano had control early before Katusha then took over and then their man Giampaolo Caruso surprised by taking off early. With the peloton lined out and gaps appearing everywhere Caruso quickly built a gap but with 600m to go just as the climb was at its most difficult he was caught by a flying Dan Martin (Garmin-Sharp). Unfortunately for Martin he had Michael Matthews stuck in his wheel and after all the work his team had done all day long there was no way that Matthews was going to miss this opportunity. 100m before the line he came out of Martin’s slipstream and sprinted to the win ahead of a visibly frustrated Martin and Joaquim Rodriguez coming in third with Nacer Bouhanni finishing in an impressive 8th on this tough final hill. 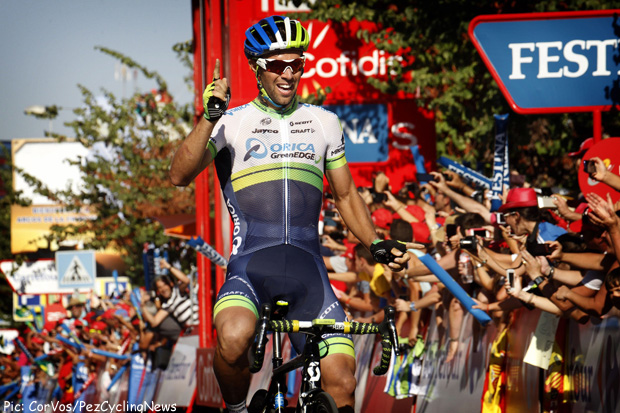 With the win bonus Matthews also took the race leader’s red jersey which was certainly just rewards for himself and the team. They came in with a plan, they did the majority of the work all day long and then Matthews was able to finish it all off perfectly for a repeat performance from the Giro. Meanwhile in the ‘true’ GC battle, Alejandro Valverde lost some time on the run in and it’s now Quintana in second place on GC and Rigoberto Uran looking dangerous in 4th at 15s.

Keisse Sprints to First Road Win of his 2014 Season