Race Report: John Degenkolb took his seventh Vuelta stage in Ronda, much to the chagrin of Nacer Bouhanni. The Frenchman felt aggrieved and complained to no avail. But the day had been full of excitement before the contretemps of the finalé.

Stage 5 was a strange affair, the heat played a big part, but so did the Tinkoff-Saxo team when they attacked on the run in to the finish splitting the peloton. In the end the race came down to a sprint between Degenkolb and Nacer Bouhanni, the strong German got the win, but Bouhanni less than happy with the outcome.

The Course
Twisty, lumpy roads from Priego de Córdoba to Ronda make the 180 kilometers hard for any team to control the race. 15 kilometers from the line, the race crests the Cat 3 Puerto El Saltillo before dropping into Ronda, the climb isn’t as steep as the previous day into Córdoba, but should shake out a few riders before the line.

On a small climb just 15 kilometers from the start; Tony Martin (Omega Pharma – Quick-Step) and Pim Ligthart (Lotto Belisol) made their bid for glory. As always MTN-Qhubeka wanted a man in the break and chased for a short while before Orica-GreenEDGE and Giant-Shimano gave a bit of an effort. FDJ.fr also came to the front and pulled the pair back to 1:30 as the race approached the first intermediate sprint of the day in Encinas Reales after 55 kilometers.

1st Intermediate Sprint
At the sprint: Ligthart crossed the line ahead of Martin and Nacer Bouhanni (FDJ.fr) won the bunch gallop and the lead had gone up to over 2 minutes. Ligthart and Martin’s advantage fluctuated around the 1:30 and 2 minute marks and at the feed-zone after 91 kilometers it was at 1:50. 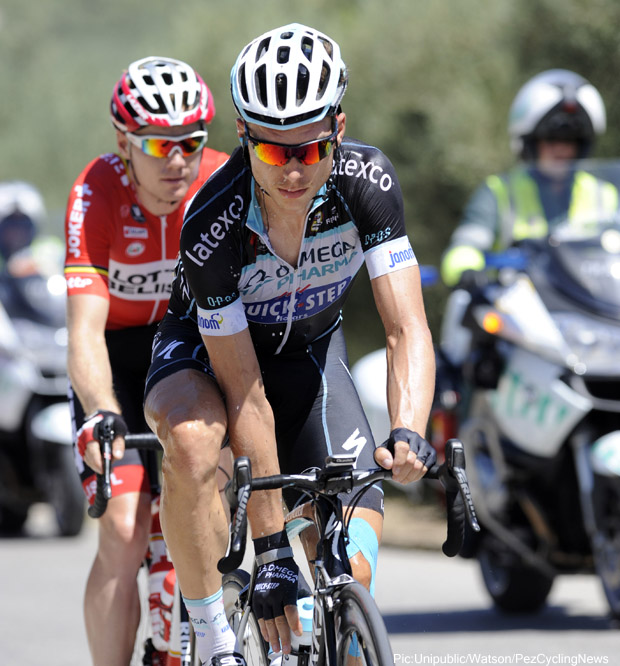 In the end Pim Ligthart had to go it alone

At the start in Priego de Córdoba, Orica-GreenEDGE had stated they would not defend the overall lead of Michael Matthews, so all the work was being done by the sprinters teams, mostly FDJ.fr and Giant-Shimano. By the time everyone had picked up their musettes at the feed-zone, Ligthart and Martin had over two and a half minutes with 70 kilometers to go.

Disaster for Tony Martin as he needs mechanical help and is caught by the peloton as Pim Ligthart pushed on solo. With Sky, Giant and FDJ chasing, the lead for Ligthart slowly came down and with 60K’s to go it was at 1:50 again.

2nd Intermediate Sprint
Chris Froome jumped on the wheel of team mate Christian Knees at 150 meters from the line in Campillos for 2nd place and took a 2 seconds bonus, this moved him up to 14th overall at 33 seconds. 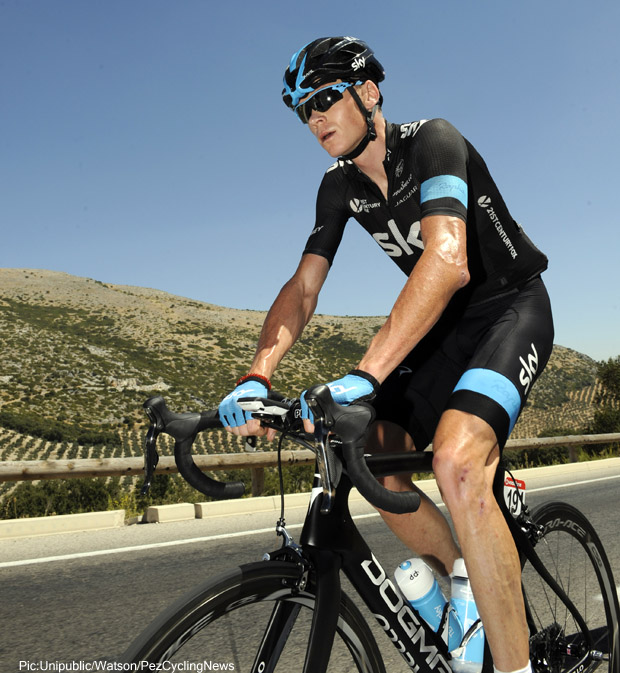 Coming into the last 50 kilometers and the peloton was less than interested in doing anything in the high temperatures and the speed dropped to 20kph. Up front Ligthart looked as though he wanted to be caught, but he rode on at a steady pace.

On the uncategorized climb to Tiba, with 44 kilometers to go, Ligthart pulled out a few more seconds for a lead of 1:50.

Into the last 40 kilometers and Tinkoff-Saxo put the complete team on the front, which put the peloton into a single line lifting the pace to 60 kph and splits started to appear in the bunch. 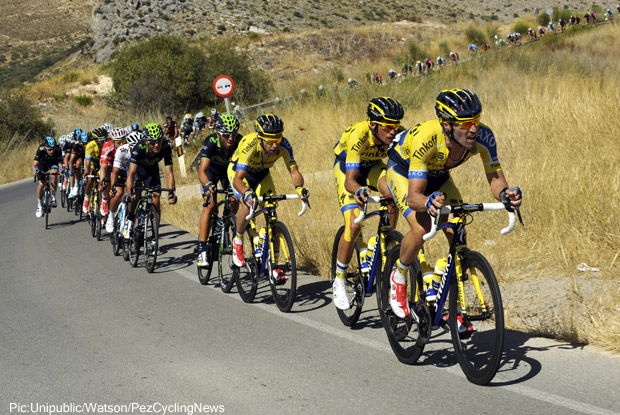 Tinkoff-Saxo put the hammer down in the crosswind

As the speed shot up the bunch was in three groups with a crosswind and speed causing the carnage. Tinkoff, Katusha and Sky were in the front section, although no one knew who was in trouble at or off the back.

Ligthart was caught with 33 kilometers to go.

All the overall hopefuls looked to be in the front group as was the Red Jersey of Michael Matthews and sprinters; Bouhanni, Degenkolb and Tom Boonen. Tinkoff-Saxo had caused the splits and with 28 kilometers to go they allowed Movistar to come through to help consolidate the advantage. Garmin-Sharp had missed the boat with Dan Martin, Talansky and Hesjedal, as had BMC’s Cadel Evans.

The second group split and the front section joined the first group at the start of the Cat 3 climb of Puerto El Saltillo, Dan Martin and Cadel Evans were amongst them.

Puerto El Saltillo
Tinkoff-Saxo still had seven riders on the front as the road started to rise towards Ronda, but the speed had eased off a little as Movistar and Sky had moved forward into the second line of riders. The attack by Tinkoff-Saxo had scared a lot of riders, but looked as though it hadn’t achieved anything of note. The third group was well over 30 seconds back.

Caja Rural-Seguros RGA attacked to take Luis Mas Bonet to the line for KOM points, but MTN-Qhubeka’s Sergio Pardilla had another idea and ruined the plan and Mas only got the points for 3rd as his team mate Amets Txurruka was first and Pardilla second.

Alejandro Valverde made a small attack, but as the road had flattened the race was all together with 10 kilometers to go. Bad news for Tom Boonen as he punctured, but with some ‘help’ he regained the front group. The second group was at two minutes and the third was well over four back.

5 K’s to Go!
Sky, Movistar and Tinkoff-Saxo took control of the peloton on the run-in to the finish. At 2 K’s out Sky set the pace until BMC came through for Philippe Gilbert. Under the red kite and Gilbert’s lead-out man jumped, but John Degenkolb had the speed to pass with Nacer Bouhanni on his wheel. Bouhanni wanted to come through on Degenkolb’s right, but there was no room between the German and the barrier. Bouhanni was not pleased at the outcome and showed his displeasure with a wave of the arm, but the sprint was clean. Moreno Hofland crossed the line in third. 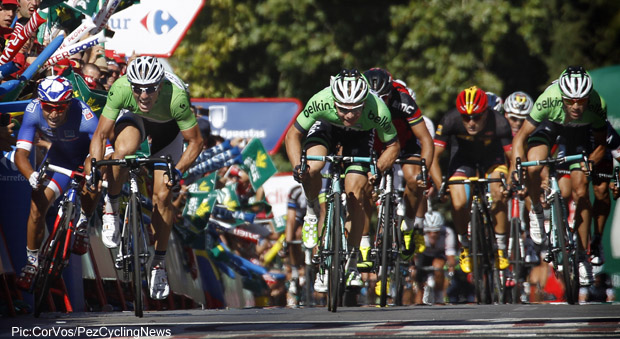 Two in a row for John Degenkolb and Alberto Contador showed he is keen make this a hard Race.