Race Report: Everyone was saying this stage would be the first form pointer for the top men in this years Vuelta a España, and so it was, up to a point. Alejandro Valverde took the day, but the Vuelta is still wide open.

The peloton was all together for the final 4.6 up hill kilometers and the names we expected to see where all represented. Valverde, Rodriguez, Froome, Contador and Quintana fought out the last ramps and Valverde had the best jump of the group. Stage, combativity jersey and the overall all went to the Movistar man, but its still early days.

The Course
The 167 kilometer stage 6 from Benalmádena to La Zubia is the first real appointment with the mountains; any rider with overall ambitions will have to be at the front at the summit finish of the Alto Cumbres Verdes. The first 65 kilometers are flat, but then the Cat 2 Alto de Zafarraya kicks in climbing to 910 meters in 12 kilometers. Then after 111 kilometers the Cat 3 Alto de los Bermejales climbs 300 meters before dropping into the valley for 45 kilometers to La Zubia. The Cat 1 climb of the Alto Cumbres Verdes is 4.6 kilometers long and reaches 1200 meters at its summit. The average gradient is 9.5% with the steepest section being 12.78%. 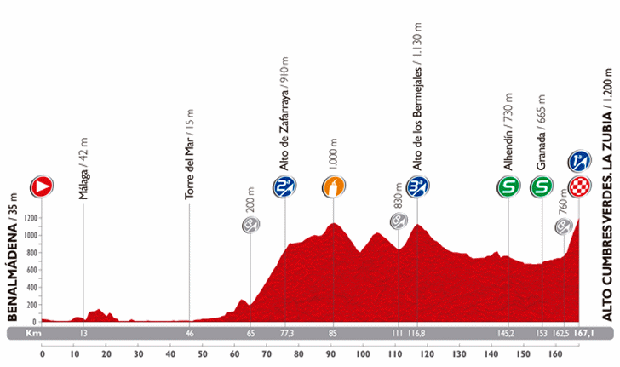 The hot weather was set to continue today, a few degrees cooler than the first days, but still hot. It was reported that the peloton went through 4,500 bottles in stage 5, that’s 22 bottles per rider.

The previous days escapee; Pim Ligthart (Lotto Belisol) was first to attack, he was joined by the KOM leader Luis Mas Bonet of Caja Rural-Seguros RGA and the two fought to maintain a lead of a minute. Behind them many small groups tried to cross, but the peloton was having none of it and all attempts were closed down.

After 20 kilometers all had settled down and the lead jumped to 5 minutes, at that point the bunch lost interest and the lead shot up to 12 minutes after 40 kilometers. Ten kilometers farther on and the gap was nearly 15 minutes. Garmin-Sharp thought this would be the best time to start the chase as the break neared the first climb of the day; the Alto de Zafarraya. 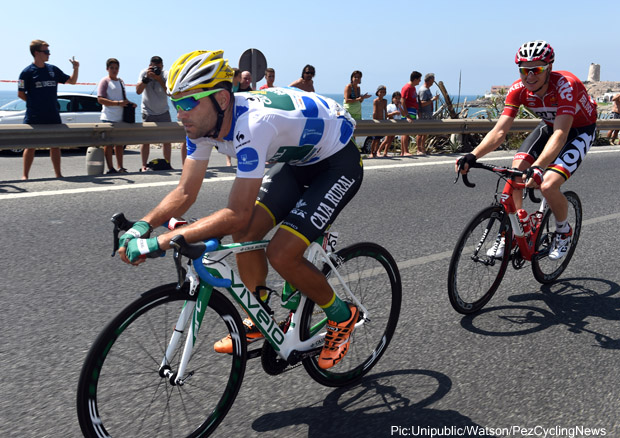 Alto de Zafarraya
At the base of the 2nd Cat climb, with 102 kilometers to go, Ligthart and Mas had 12 minutes on the Garmin led bunch. Mas Bonet crossed the summit ahead of Ligthart 11 minutes ahead of Jerome Cousin of Europcar at the head of the bunch. Katusha joined in the chase and the lead was down to 10 minutes, showing that Joaquim ‘Purito’ Rodriguez was in a serious mood for the day.

Garmin-Sharp again moved to the front with Movistar in close attendance and coming into the last 60 kilometers the lead was 9:20.

Alto de los Bermejales
The second climb of the day; the Alto de los Bermejales began with 56 kilometers to go and the tall Garmin rider Johan Van Summeren had been given the role of pace maker, bringing the Mas/Ligthart tandem back to 8:35. Eritrean rider Merhawi Kudus (MTN-Qhubeka) was involved in a crash in the bunch, but managed to regain the field.

Mas Bonet took the points at the top as lower down the hill Movistar came to the front, the peloton at this point were at 7:42 with 45 kilometers to go, Katusha again moved forward. The Russian team really made the effort and the advantage for the duo plummeted and with 30 kilometers to the line the lead was down to 6:24. 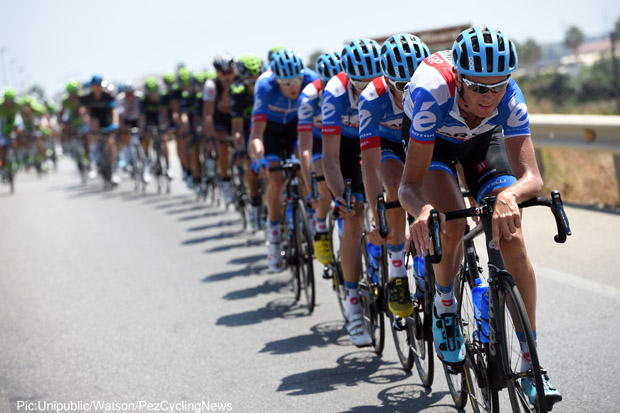 Garmin-Sharp were the first team to start the chase

1st Intermediate Sprint
The first intermediate sprint came after 145 kilometers in Alhendín, Ligthert rolled through first, as the lead was only 4:30. Katusha was still towing the peloton, but John Degenkolb (Giant-Shimano) sprinted through to take the 3rd place points to help his Green jersey total.

Orica-GreenEDGE put four riders on the front, including the Red jersey of Michael Matthews and the chances of Ligthart and Mas reaching the final climb ahead were shrinking.

2nd Intermediate Sprint
The second sprint of the day was in Granada with 14.1 kilometers to go to the finish. Again it was Ligthart who was first, Mas second and Degenkolb third in the bunch.

Orica wanted the best seats for the last climb and had their riders working like a sprint train coming out of Granada with 10K remaining, the lead came under 2 minutes.

All the top men moved forward; Froome, Quintana and Rodriguez were visible at the front as Peter Sagan (Cannondale) went out the back.

Alto Cumbres Verdes
When the leaders hit the bottom of the climb they had 20 seconds and the bunch were snapping at their heels. Ligthart didn’t want to give up and pushed on solo at the toughest point. Christophe Le Mevel (Cofidis) attacked trying to cross to Ligthart, but he didn’t have the steam in his engine and the Katusha powered peloton swept everyone up.

George Bennett of Cannondale made an early effort, which also came to nothing as Movistar took control. Alejandro Valverde sat on the front with Nairo Quintana on his wheel as the lead group was down to 20 riders. 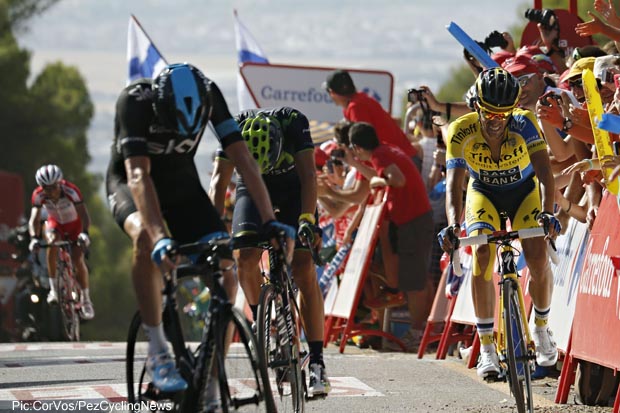 2 K to GoFroome, Contador and Quintana, all in Valvere’s shadow

Valverde was laying down a sharp pace ahead of his team mate Quintana as Froome, Aru, Rodriguez and Contador were holding on to the Colombian’s wheel, the group became smaller by the pedal rev.

The Last K
The lead group was down to nine riders and it was time for Rodriguez to attack. Valverde jumped on his wheel and slowly Froome pulled them back with Contador and Quintana on his tail. Next to jump was Valverde; Froome and Contador matched him, but Rodriguez and Quintana were distanced. With 200 meters to go Valverde put in another jump to make sure of the stage win and his second stint in the Red Jersey this Vuelta. 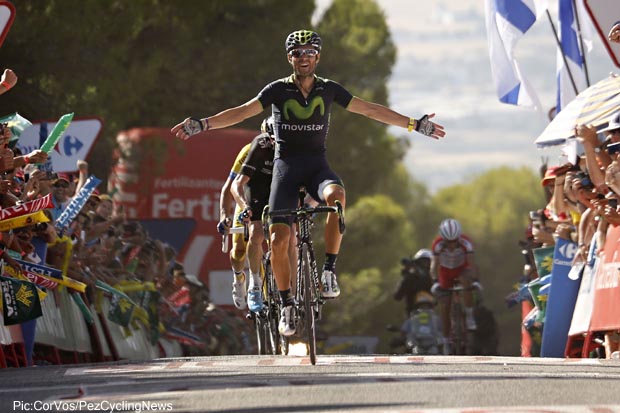 A great win by Alejandro Valverde, but was he working for teammate Nairo Quintana?

Quintana lost some ground to his teammate, but the short climb was probably not the best for his style. Froome and Contador looked in a similar condition as Rodriguez lost a matter of meters. This was the first ‘hard’ stage, but nothing has been decided.

Stage winner and overall leader Alejandro Valverde (Movistar): “This victory means a lot to me. Though it’s harder to feel great with these temperatures, my legs were really good today, I felt well all over the course and I was able to win. It was a climb that really suited me and we couldn’t miss such an opportunity had we got it – still, I think everyone saw clearly I was working for Nairo.”

Keep it PEZ for the full Vuelta coverage.

Meyer returns to racing for Drapac at Tour of China I