Race Report: On a day when we thought the race win and overall lead would go to a Colombian; one Colombian took the stage but it was a different one that took the Red Jersey. Winner Anacona had a great stage win and then watched the clock to see if he would be in the overall lead. But in a surprising attack in the closing kilometres; Alberto Contador made the move that laid the foundation for Nairo Quintana to chase and take the lead.

Changing Conditions
As the race continues inexorably north by north east, and moves away from the wilting heat of the south, it was another long day in the saddle for the riders as they fought to hang on and get through to the first rest day. That meant another mountain stage and with the last one shaking up the GC all eyes were on that final climb to Aramón Valdelinares. 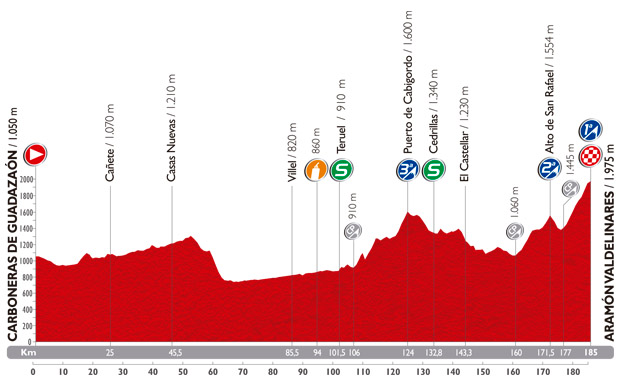 3,2,1…Go!
Riders were attacking right from the off as the flag was dropped shortly after the start in Carboneras de Guadazaón. A big group of 25 formed but the peloton didn’t like the composition and it was hauled back in within 20km. With the increase in pace the bunch fragmented and reminiscent of yesterday’s attacks across the plains, split into three groups.

Up front we had a group of 27 riders, chased by another 16 and then the rest of the bunch. As riders came and went in this initial burst of pace, eventually the chasers were down to six riders with a lead group of 25…as the chasers were catching the leaders it was obvious that they were all going away from the main bunch and they had let them go.

It was a daring move so early in this stage which featured gentle climbing for the first 50km followed by a descent and then another gradual rise until the first proper climb starting after the sprint point at Teruel. The Puerto de Cabigordo is a 3rd Category climb with the race then running down to the foot of the Alto de San Rafael, passing through the second sprint at Cedrillas. This 2nd Cat ascent would quickly take the riders onto the final 1st Cat climb to the finish and this is where the fireworks were expected.

Leader on the Road
With so many riders in the lead group Movistar was refusing to hit the panic button just yet and was just riding tempo at the head of the bunch. Lots of teams were represented in that lead group and some big names were in there: Tom Boonen (OPQS), Ryder Hesjedal and Johan Van Summeren(Garmin-Sharp), Fabio Fellini (Trek Factory Racing), Damiano Cunego and Winner Anacona (Lampre-Merida) to name but a few.

With 70km of riding completed the leaders were ahead by 6:28 and Anacona was the virtual race leader. The last couple of days have also seen Hesjedal pull back some of the time he lost and he was maybe thinking about salvaging something from this Vuelta.

As the break approached the first sprint at Teruel the 31-strong group had a lead of 7:40 over the bunch but with the road beginning to head upwards there would be a sorting out. There looked to be some passengers aboard and the other teams back in the main bunch would start to get involved. Through the sprint and the points went to Yannick Martinez (Europcar), Romain Zingle (Cofidis) and Alexey Lutsenko (Astana).

Puerto de Cabigordo
The lead riders were now starting the Puerto de Cabigordo and reports were reaching up that the weather at the summit of the final climb was in marked contrast to the other stages in this first week of racing. Gone were the soaring temperatures of Andalucía and they had been replaced here in Aragon by heavy rain at the finish. The leaders started the climb with exactly 8 minutes in hand and initially it looked as if the bunch was finally beginning to peg them back. 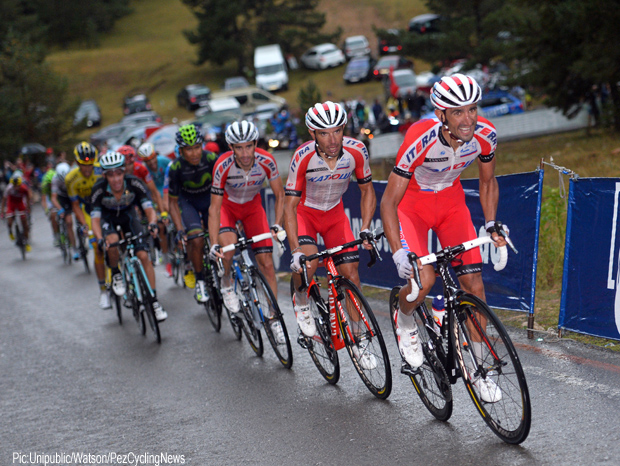 Their lead dropped by 10 seconds but by the time the crested the summit they had pushed it out to 8:30 which was the biggest it had been all day. With 60km of the stage left to run, and 35km of that more or less downhill, the peloton was going to have to pick it up soon. Lluis Mas Bonet (Caja Rural-Seguros RGA) was beaten to the banner by Jérôme Cousin (Europcar) but retained a 9-point advantage over the Frenchman in the KOM standings. As the leaders started the descent they encountered the first rain.

Through the sprint point at Cedrillas and this time the points went the way of Nikias Arndt (Giant-Shimano), Jay Robert Thomson (MTN Qhubeka) with Martinez picking up third. With the peloton now on the climb they had pulled back a minute on the leaders.

Alto de San Rafael
As the leaders were heading towards the foot of the 2nd Category climb it was still Movistar leading the main peloton but others were beginning to move forward. Team Sky was showing some interest, as were the other GC teams. Up ahead, the leaders had split on the downhill section with Boonen taking two others off the front. With three men in the break though, Garmin brought it back together.

With a lead of just under 7 minutes with only 32km to race it was beginning to look as if the winner would come from this group…and Garmin wanted the win. Van Summeren was driving the break for Hesjedal as behind Sky and Tinkoff-Saxo had moved into position.

Jumping away just before the break turned onto the climb Sam Bewley (Orica-GreenEDGE) had made a move for stage victory. Although there were still two climbs to go they were only really separated by a short downhill section and the Kiwi rider might have made a great move. It was not to be though as two other riders jumped across to him and then eventually all the others began to come across.

With 20km to go and six minutes in hand Winner Anacona kept pushing on with his sights set on Red. He kept taking riders off the front of the break and kept getting dragged back but the break was splitting up. The riders were now into heavy rain and the temperatures had dropped dramatically. Ancona was clear with Bob Jungels (Trek) and they had Javi Moreno (Movistar) along as the policeman.

Back in the bunch Team Sky was leading but they weren’t eating into the lead. With Chris Froome feeling a little concerned about crashes they were just keeping him ahead of any trouble. Winner Ancona started the day 2:50 behind Valverde (Movistar) and the Spanish team looked as if they had decided to give the jersey to the Colombian rider. With the TT coming on Tuesday it was likely it would come back to them.

The Ancona group had a lead of 40 seconds on the chasers including Hesjedal and Damiano Cunego (Lampre-Merida) but with the short downhill section coming up the question was whether it would come back together before the final ascent.

Moreno had probably been given the nod over the radio as he was now working with the other two. 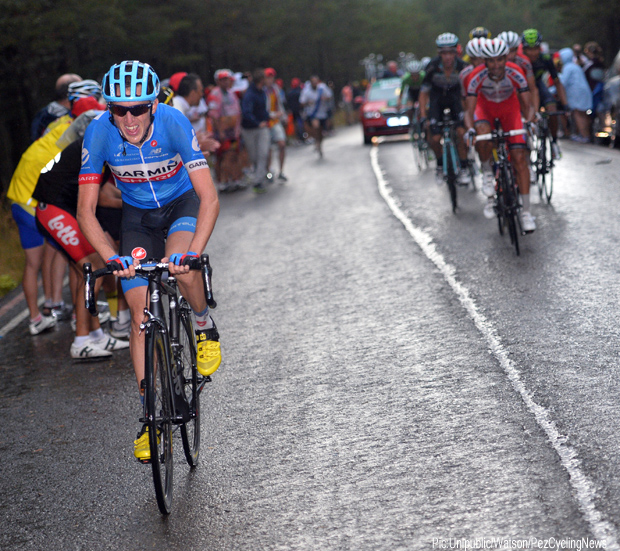 Dan Martin (Garmin-Sharp) started the action behind the leaders

Time to Fly
As the three leaders took the descent and came into the final climb the excitement was back in the peloton as Tony Martin (OPQS) attacked the downhill. Rigoberto Uran (OPQS) was glued onto Martin’s wheel as they strung the bunch out but Sky reacted with Peter Kennaugh picking it up and making sure that Froome stayed in contact. As the bunch came onto the climb the main peloton was driving and had brought the gap down to 4 minutes.

The leaders were onto the steepest section and they dropped Jungels who couldn’t hold the pace of the other two climbers. The smart money would have put the win to Moreno and the jersey to Anacona but the Colombian wanted more time and dropped Moreno as he pushed on towards the summit. The time gap was coming down and at 5km to go he had a lead of 3:40 so it was going to be close. 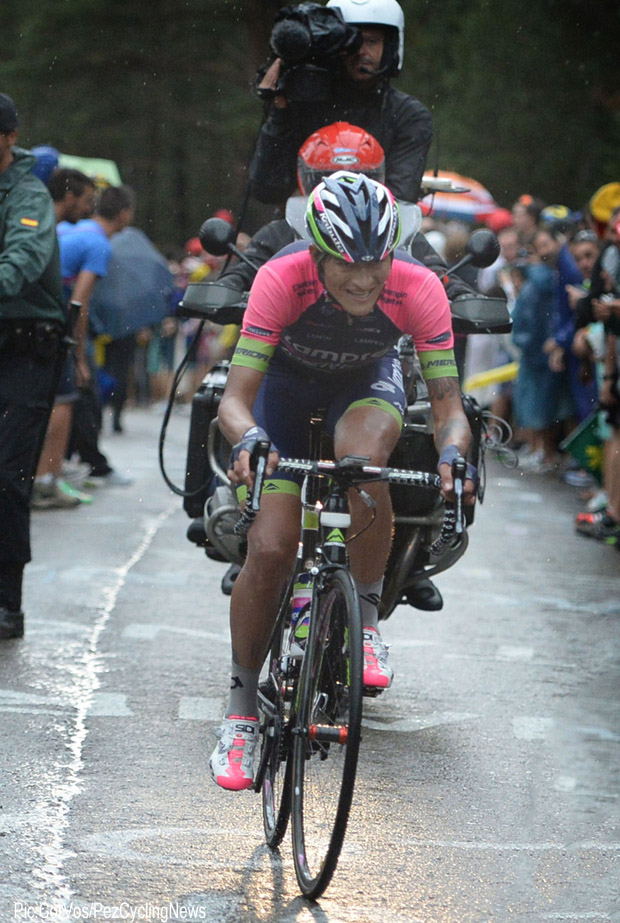 He was struggling, standing up and then sitting down and fighting his bike all the way. He needed 2:40 with the 10 second bonus for the win but more than that, he needed the favorites behind not to attack each other otherwise his advantage would disappear.

Anacona was on the last steepest section 2.5km from the line but his gap was holding. Sky was driving the bunch and it seemed as if someone would make an attack…and it came from Dan Martin (Garmin-Sharp) as he tried to jump away. Not good enough as Katusha brought Joaquim Rodríguez to the front and they passed the Irishman. 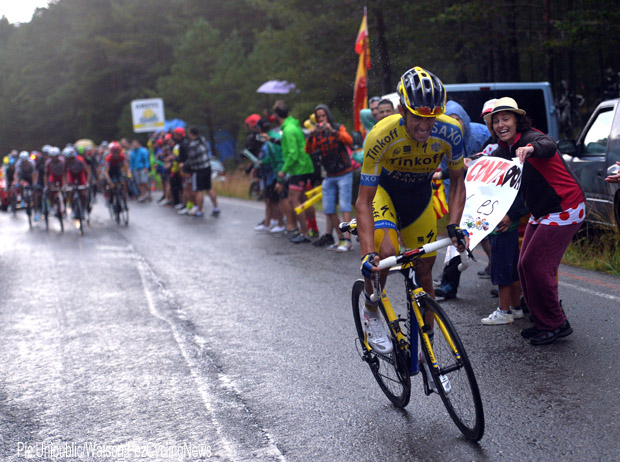 And now Contador (Tinkoff-Saxo) shot off the front of the pack and fly away from the bunch. Anacona was at 800m to go but the time gap was at the limit. Quintana was chasing but Valverde wasn’t responding. He was being chased by Rodríguez and Quintana as up at the summit the stage went to the Colombian but all eyes were on the gap between Contador and Valverde as the Red Jersey could pass to the Tinkoff rider if he got 18 seconds.

Contador was driving for the line with Rodríguez, Moreno and Quintana trying to get back to him. Quintana put in a final effort and just got to the Spaniard’s wheel as they crossed the line and took the race lead. Valverde led the others home 21 seconds back and even managed to gap Froome for a couple of seconds.

It was a great win for Winner Anacona, and a great fight for the jersey but it was almost overshadowed by a beautiful attack by Alberto Contador showing that he has serious intentions in this race. Anacona moves in to 4th spot overall with Contador moving up to 2nd place. 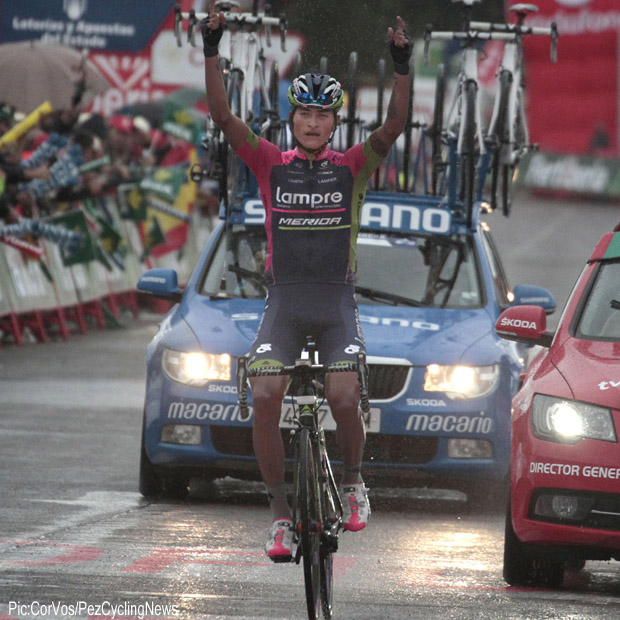 Rest day tomorrow and then the TT so it could be all change again. Keep it PEZ!