Race Report: After the solo of Matthias Krizek was brought to it’s slow demise, the last 10 kilometers of stage 12 was a battle between the GC teams and the sprinters teams. In the end the sprinters won, but it took a last K crash to give the fast men their head.

In a repeat of two years ago, Giant-Shimano’s John Degenkolb succeeded in Logroño, his expected battle with Nacer Bouhanni didn’t come to a head due to a crash and so the German only had to fend off Tom Boonen, (Omega Pharma – Quick-Step), Jacopo Guarnieri (Astana) and Peter Sagan (Cannondale) for his third stage win of the 2014 Vuelta a España.

The Course
Strangely the course for stage 12 is a circuit through Logroño of 166.4 kilometers, passing through the start/finish eight times after a 20.8 kilometers lap. No real climbs, although the circuit does undulate from its lowest point of 320 meters to its highest of 485. You would normally call this a sprinters day or a day off for the GC men, but the way this Vuelta has been shaping up anything could happen.

Twenty-six year old Matthias Krizek of Cannondale launched himself up the road hoping that a good working group would form around him, but no one came to help and the Grand Tour virgin built up a lead of over 5 minutes after 25 kilometers and then over 8 at 40 kilometers. 10K’s further on and he crested 9 minutes, seeing as he is an hour and a half down on Alberto Contador; I don’t think he was any worry to the GC men.

FDJ.fr and Giant-Shimano started to chase and with 100 kilometers to go as Krizek’s lead was down to 7:30 and with 90 remaining it was a minute less. The Tinkoff-Saxo team was happy to let the sprinters teams work on the front, but they were keeping the Red jersey of Contador close to the pointy end of the peloton.

The Points competition leader; John Degenkolb (Giant-Shimano) must have his eye on this stage as he won here in the 2012 Vuelta, but looking at the form of Nacer Bouhanni in the gallop, he could have his work cut out for him. In an interview with Laura Meseguer on EuroSport that: “the course suits me, but I’m still a little handicapped after my crash.” 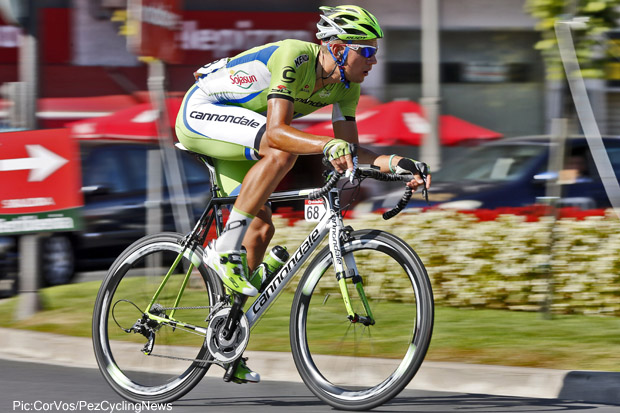 A day of pain for Cannondale’s Matthias Krizek

The last 5 kilometers were not straight forward; at 4K’s out there is a left-hand bend on a round-about, then a gradual sweep to the right before a sharp right hander just coming to the last 2K and then a sharp left and right, but the last 1.2 kilometers are straight and slightly downhill.

60K to GO
With 3 laps to go; FDJ.fr were in control and Matthias Krizek’s lead was down to 3:52, the bunch were not putting much effort into the chase, but they were nibbling at his advantage.

News from Movistar’s Nairo Quntana is that he will be having surgery on his collarbone today (Thursday) and hopes to be back in the saddle in a couple of weeks. He also Tweeted on Wednesday that his 2014 season is over and “I’ll think about 2015.” 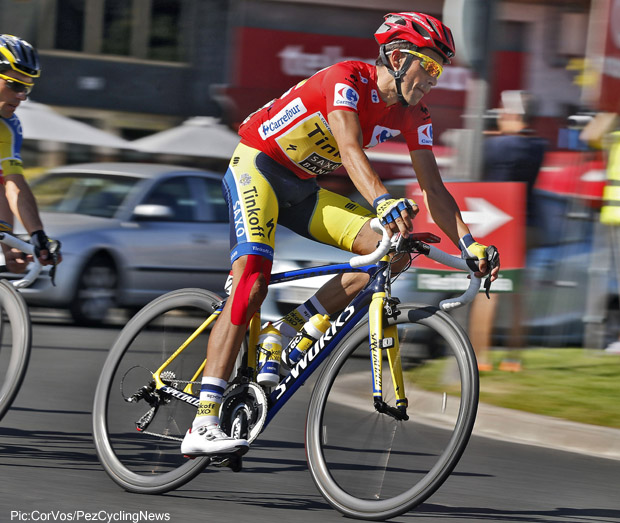 An easy day for the overall leader Alberto Contador

Two Laps to Go
Krizek’s lead was 3:40 with 41.6 kilometers remaining, but (I’m glad to say) the pace in the peloton had lifted and the writing was on the wall for the Austrian from Cannondale.

Giant-Shimano had one rider on the front with what looked like the full FDJ.fr team on his wheel.

The Final 25K’s
All the teams moved forward to join FDJ.fr; BMC, Tinkoff-Saxo, Belkin, Katusha and of course Giant-Shimano, some for the sprint, the others to look after the overall riders.

1 minute lead with 14.8 to do and the bunch was sorting its self out, teams where moving around like a swarm of bees in the hive, at the front Tinkoff, Movistar and Lampre were the king bees at the 13K mark.

All Together
It was all over for the brave Austrian with 12 kilometers to go and now the real action was about to begin. The bunch was like a long piece of very thin spaghetti, but it was the GC teams who were pulling the pasta straight. The sprinters teams could hold back for the moment, saving themselves for the last push.

Tinkoff-Saxo took control from BMC coming under the 5K banner, Daniele Bennati showing his speed. At 3 out; the Danish champion Andersen put in a long and fast turn. BMC’s Manuel Quinziato went for a long one, but only gained a matter of meters. Tinkoff still had the lead under the red flag and then there was a split as a crash on the last bend took most of the peloton out. 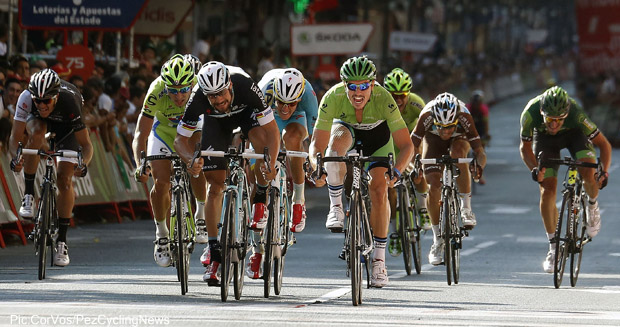 Tom Boonen came close, but he’s not the same Boonen as 10 years ago

Roberto Ferrari (Lampre-Merida) jumped early, but Giant-Shimano had Ramon Sinkledam on his wheel, guiding John Degenkolb to the front. The German unleashed his sprint and had no competition with Tom Boonen (OPQS) on his shoulder. Degenkolb coasted over the line for another stage win ahead of Boonen, Jacopo Guarnieri (Astana) and Peter Sagan (Cannondale), Nacer Bouhanni was no where to be seen. 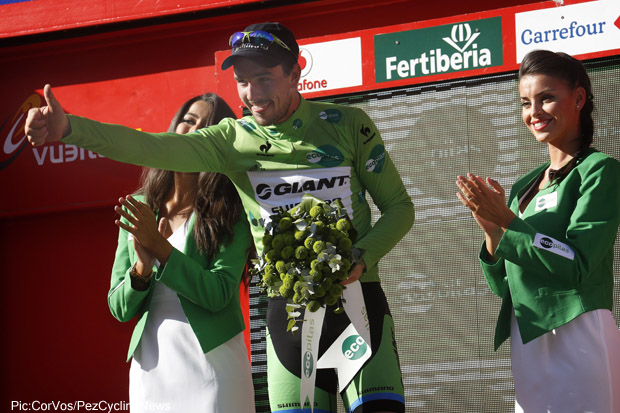 All the jerseys stay the same going into tomorrow’s 188.7 kilometer lumpy stage to Obregón.

Keep tuned to PEZ for all the exciting stages still to come.