On a day which could so easily have been the dreaded ‘boring sprinter stage’ the race detonated in the last 30 minutes with echelons, splits and a savage finale which saw Frenchman Nacer Bouhanni (F des J) the sharpest and fastest – going from 300 metres out to take his second stage of this race and his fifth Grand Tour Stage of 2014 after his Giro triple.

Despite Sky, BMC and Tinkoff using their heaviest artillery in the closing kilometres the GC remains unchanged.

Stage Eight from Baeza to Albacete and at 207 kilometres the longest stage of the race.

Baeza is a beautiful historic old Andalucian town of some 16,000 souls but back in the days of Moorish occupation in the Middle Ages the population was around 50,000. Albacete with a population of 172,000 is to the north in Murcia and is one of the least polluted cities in Europe – it was home to the headquarters of the International Brigade during the Civil War.

Between the two places the route is lumpy, sticky but not too savage with no classified climbs and the last 70 K dropping gradually to Albacete. It has ‘sprinter stage’ written all over it – with the possibility of cross wind savagery in the closing hour. 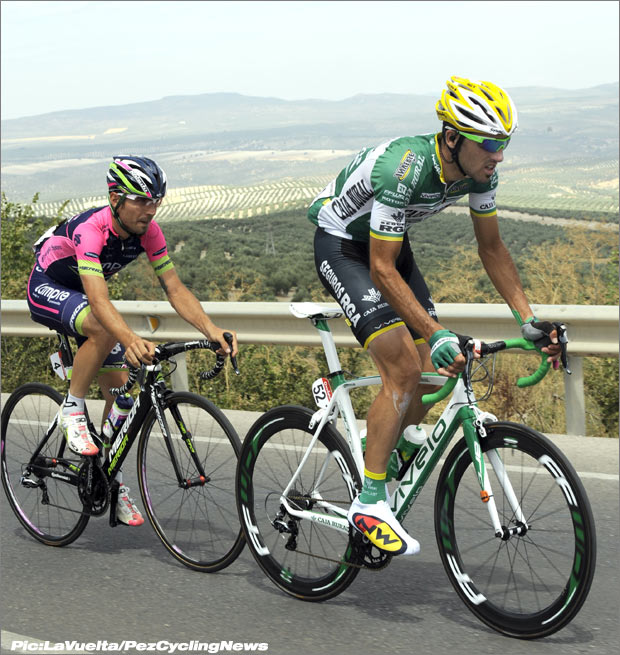 The break gets going.

Break Time
It was Messrs. Elia Favilli (Lampre & Italy) and Francisco Javier Aramendia Llorente (Caja Rural & Spain) – you just can’t keep those Caja Rural boys down – who formed the break of the day. The dynamic duo exited stage right early in the day with their maximum advantage being allowed to go to no more than seven minutes.

With 50 K to go the gap was just over a minute as the race approached the ‘danger zone’ where cross winds might well come in to play. At this point, if I was David Duffield then I’d tell you what I had for dinner last night but rather let’s look at how the race GC has developed in this first week.

GC Situation Before Winds
Alejandro Valverde (Movistar & Spain) leads – a little surprising given he was running on fumes in the last week of le Tour. But he was back to winning ways in the Clasica San Sebastian within a week and was hugely impressive in winning Stage Six of this race atop the horrible Cumbres climb.

The Spaniard’s Colombian team mate and big pre-race favourite, Nairo Quintana is in second spot and building on the form which won him the recent Tour of Burgos. He’ll come into his element in the brutal last week in the mountains of the north.

The man in third place would, under normal circumstances be no surprise, but given he crashed out of the Tour de France with a broken leg his riding is of the highest order – but Alberto Contador (Tinkoff & Spain) is no normal rider. It’ll be interesting to see how he rides when we go in to the big mountains…

Sky’s 2013 Tour winner, Chris Froome (GB) is in fourth spot and looking frisky – if only he can stay in the saddle. His propensity for falling off – which cost him his Tour victory chance this year – has resurfaced with another encounter with the tar yesterday.

Young Estaban Chaves (GreenEDGE & Colombia) is performing very well in fifth spot – but no surprise to GreenEDGE management who reckon he’s headed for the very top of the Grand Tour GC pile. ‘Purito’ they call Joaquin Rodriguez (Katusha & Spain) and as a pure climber in sixth spot he has a lot to look forward to – he just needs to get through days like today in one piece.

Skinny Dutchman Robert Gesink (Belkin) is lucky seventh – and again those days in the Picos will be right up his street, if he can just avoid that ‘bad day’… Fabio Aru carries the flag for Italy – and with a Giro podium to his name already this year has to be considered a serious challenger for third spot behind Quintana and Froome.

Frenchman Warren Barguil (Giant) unfortunately came down in yesterday’s finish – remember he’s a man who won two stages last year. Gesink’s team mate and compatriot Wilco Kelderman holds up the top ten – and with 32K to go the two fugitives are history as the nerves kick in.

Into the Wind
Sky ride the front, Philip Deignan, Peter Kennaugh and that man (or is it Superman?) Kiryienka. Trek, QuickStep, Belkin and Tinkoff all come up too – and a lead echelon has formed with Boonen the ringmaster as the peloton cracks open with 25 K to go.

Quintana is there and going through, Cancellara, Contador, Froome, Valverde, Aru, Sagan, Evans, Matthews, Degenkolb, Kiryienka, Tosatto but Kennaugh has been blown back to the second echelon 20 seconds down. So too has Ryder Hesjedal and the aforementioned Chavez.

Contador barks orders to his henchmen Tosatto and Benatti to keep it close into the gutter and make life even more horrible for those behind. BMC ride hard with Evans right to the fore; behind, Cofidis try to get it back together. The wind goes head on as the 10 K banner approaches and it’s lined out with the pace at 10/10 on the pain scale.

Benatti is bestial; Degenkolb and Aru have gone – and so too has Quintana, this is savagery. The lead group is down to maybe 20; Kiryienka, Evans, Valverde, Contador – but amazingly Giant have brought Degenkolb back up.

Respect – and Quintana is a lucky man as it eases a little and he hangs on the coat tails of Giant. Degenkolb is there, Boonen, Bouhanni, Sagan, Matthews, Hofland as Sky pile it on inside four K. 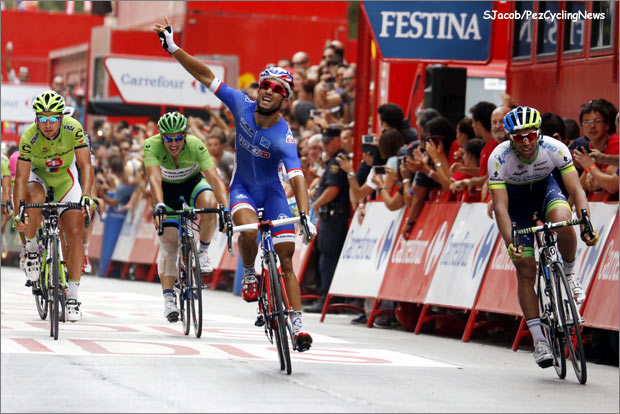 Tight Roads Finale
QuickStep take it on through the roundabouts – is Tornado Tom still quick enough? We’ll know in two K. Bouhanni is close, so is Matthews as the ride kite flaps above them. GreenEDGE, QuickStep, still QuickStep for Boonen but Bouhanni goes long, long and grabs big daylight – Matthews comes late but it’s the Frenchman who takes it by half a bike length from the Australian and Sagan.

Brilliant sprinting from the Frenchman. Those closing kilometres were well worth the wait on a day which ended up anything but a ‘boring sprinter stage.’

Enjoy the champagne tonight, Nacer it’ll be the last for while, mon ami…