Race Report: Astana’s Fabio Aru has to take the race to overall leader Tom Dumoulin if he wants to claw back the 3 seconds he need for the final win. The Sardinian attacked, attacked and attacked again, but he could not shake the big Dutchman. At the head of the race Nico Roche and Haimar Zubeldia sprinted it out for the stage honors, with Roche taking the victory.

With only three days for Fabio Aru (Astana) to un-seat Tom Dumoulin (Giant-Alpecin) from the red jersey, the Sardinian has to take every chance he can and today he made many attacks, but gained nothing. The break of the day was big, 25 riders, it split and Nico Roche (Sky) and Haimar Zubeldia (Trek) crossed the final climb together and fought out the sprint with the Irishman edging out the Basque. 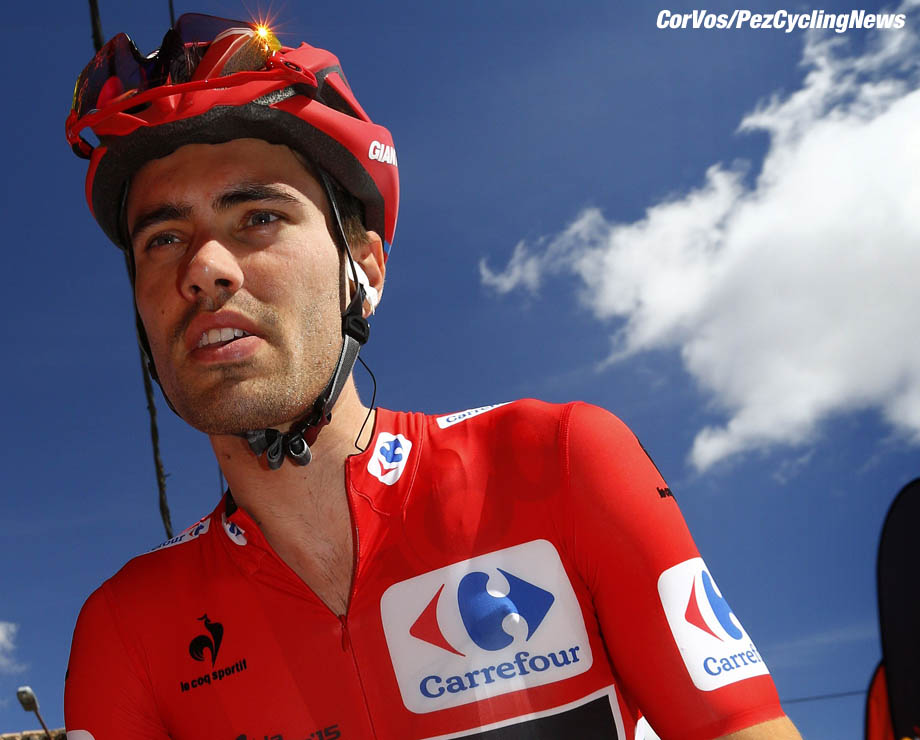 Tom Dumoulin in red again at the start

After the strong ride from Tom Dumoulin (Giant-Alpecin) in the Burgos time trial, the Dutchman now has 3 seconds advantage over Fabio Aru (Astana) and 1:15 over Joaquim Rodriguez (Katusha) going into the last three decisive stages. Saturday will be the big day, but there are opportunities today in stage 18 and on Friday. Tom Dumoulin said at the start: “As of now I’m not going to ride the Vuelta at my own pace but at that of Fabio Aru’s. I will ride conservatively. It’s true that he is explosive but I will not give him anything.” 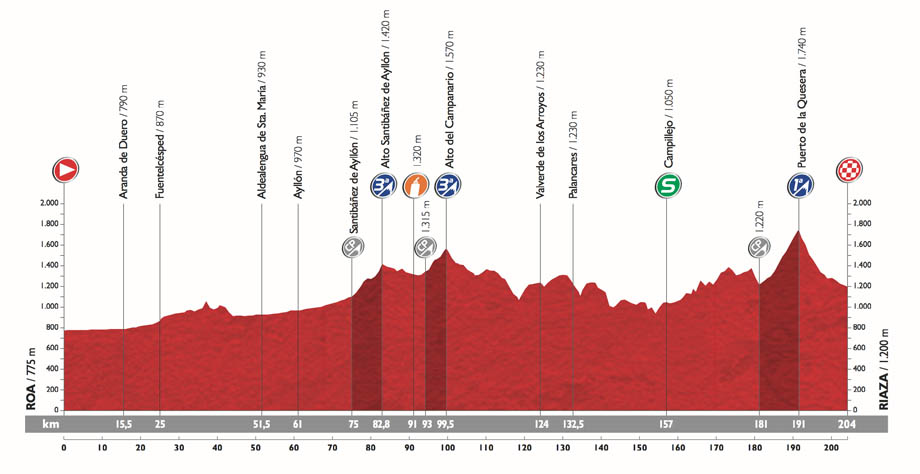 A fast start
The start was fast causing splits, but Giant-Alpecin came to the front and settled things down, eventually a large group of 25 riders were allowed to take their leave of the peloton. The first hour was run off at over 50 kph.

Alto del Campanario
It was Madrazo again taking the points to protect his Caja Rural-Seguros RGA teammate Omar Fraile’s lead in the KOM. Into the final 100 kilometers and the lead was still being held at six minutes. Under the impetus of MTN the lead was cut by 1 minute as the race entered the 70K to go mark. Not long after, Astana moved to the front of the peloton and the speed lifted to take the lead down to 4:45 as they neared 50 kilometers to go.

At the intermediate sprint in Campillejo the lead was 4:51 with 47 kilometers to go, the leaders just rolled over the line without showing much interest. In the peloton, Fabio Aru was inline behind his Astana men as they did all the work. Katusha and Giant-Alpecin both had their men, Rodriguez and Dumoulin, next in line. This all must have been great for Movistar and Tinkoff-Saxo who were perfectly placed for any move and also sheltered from the wind and not having to do any chase work.

Forty kilometers out and the lead was down to 3:38 all due to the hard work of Astana. There are no flat bits of roads in this area and the surface is heavy, none of those glacier smooth roads of the south of Spain. Up front Adam Hansen and Tosh Van der Sande were doing much of the work for the break to try and put their Lotto Soudal teammate Bart De Clercq in the top ten overall.

Katusha’s Angel Vicioso jumped from the peloton on one of the many rises, the plan was for his leader, Joaquim Rodriguez, to join him, which he did, but Astana were having none of it and chased them down. Aru now only had four teammates with him, but then most of the GC men were in the same position as they hit the small hills before the big climb of the day with 30 to go to the finish in Riaza.

As the escape approached the final climb, the pace lifted to drop a couple off the back, but the same had been happening in the peloton for some time and the chase was looking much smaller than previously as Astana kept the pace high.

Eventually Gauthier and Van der Sande rode off the front of the break, but the effort was too much for the Lotto man and he dropped back to a fractured group. At 24 kilometers, Gauthier had 22 seconds on the group and 2:11 on the peloton which had approximately 40 riders left.

Puerta de la Quesera
At the start of the Cat 1 climb riders tried to jump across to Gauthier, this split the lead group even further and Astana was thundering down on them at 2 minutes and pulling in the dropped riders. Gauthier was struggling, but still managing to hold his slim advantage at around 20 seconds, by this point the break was down to around 15 riders. 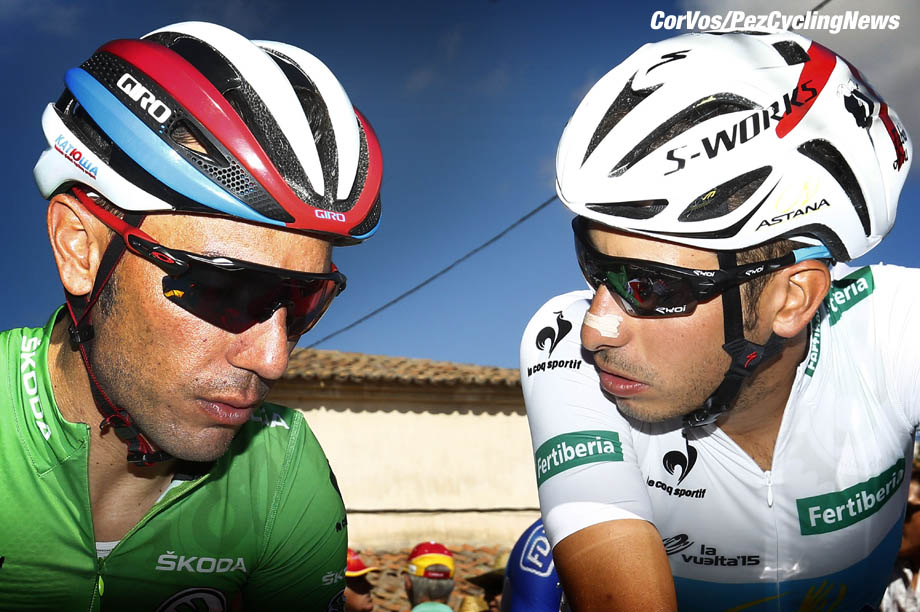 Purito: “What can we do Fabio?”

Aru attacked at 19 kilometers, but Dumoulin was on his wheel as was Rodriguez and the other overall riders. The Italian didn’t wait long to put in another jump, but again the Dutchman was there. This split the peloton down to just the top men: Aru, Dumoulin, Rodriguez, Quintana, Valverde, Majka and Chaves. Aru gave another jump but the easing off allowed some of the other top ten riders to rejoin. Chaves was next to try; he was joined by Valverde and later Majka and Nieves. This move by Chaves looked good, but the others closed it down too.

Up front Nico Roche caught and passed Gauthier with Zubeldia trying to join him.

Aru attacked again on a slight rise, but Dumoulin was ready for the move and was on him as they caught most of the break apart from Roche and Zubeldia. Mikel Nieve (Sky) slipped off the front of the red jersey group as Valverde attacked the others, followed by another jump from Aru. The attacks were coming thick and fast, but Dumoulin was on to every trick.

At the summit Roche and Zubeldia had 25 seconds on the remainder of the escape and 52 on the Dumoulin group of 11 riders. Quintana rode away at the start of the descent, but it was the red jersey who closed him down with 10 fast kilometers left to race.

5K to go
Zubeldia led the heavily bandaged Roche on the tricky drop in to Riaza, while behind the Dumoulin/Aru group caught the last of the break making a chase group of around 18. On a little rise Joaquim Rodriguez attacked, but was joined by Dumoulin, Valverde and then all the others and it was checkmate again.

Into the final kilometer and Zubeldia was on the wheel of Roche and looked like he was ready to jump past the Irishman, but the Sky rider had the measure of Zubeldia and kept the speed so high that the Basque couldn’t get past him before the line. 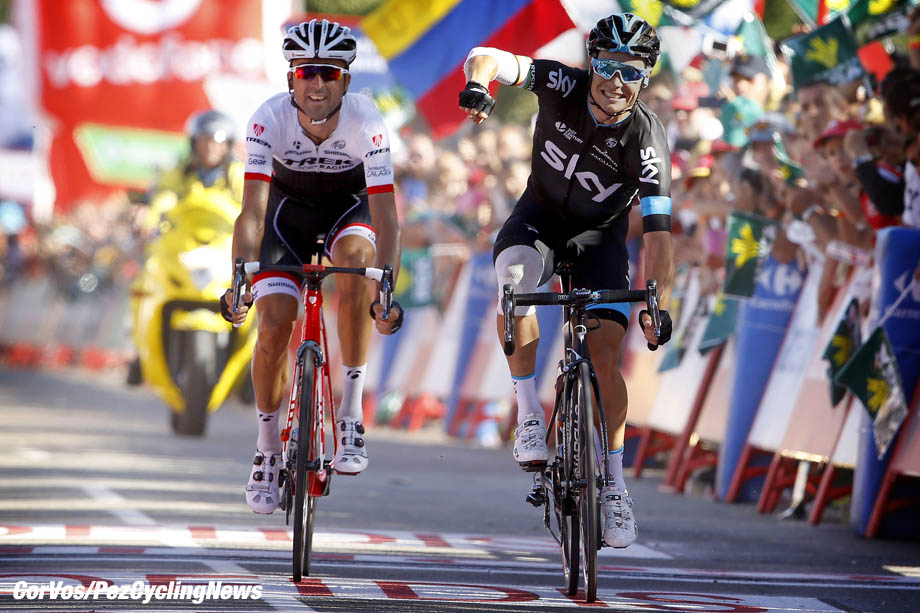 Roche was just too strong for Zubeldia at the line

The sprint for 4th, as Conçalves had not been caught, was taken by Valverde after a lead-out from his teammate Rojas. Aru was very disappointed and rode through the finish area and kept going, ignoring journalists, fans and his team helpers. Dumoulin covered all attacks and looked comfortable doing it; Aru must be wondering what he must do to take the red jersey from the big Dutchman. 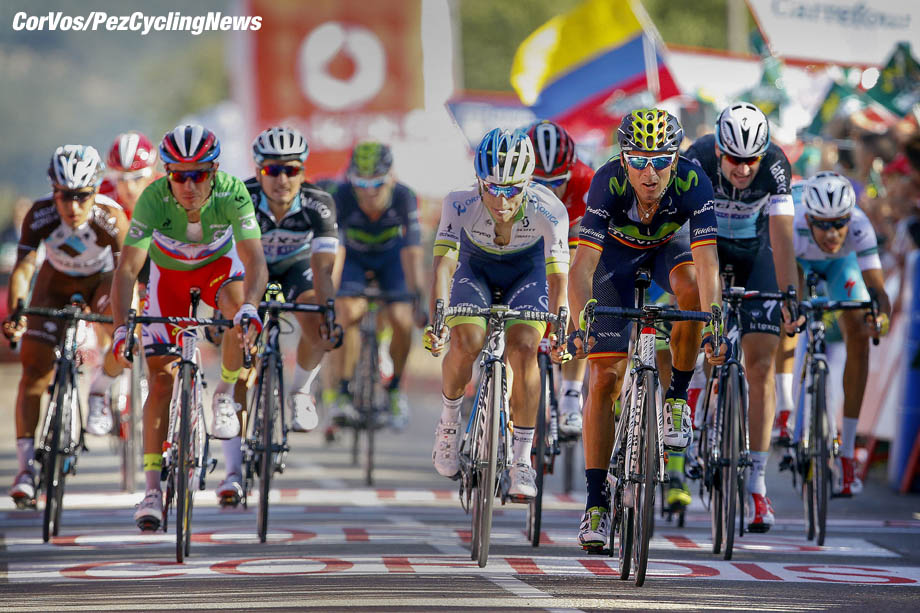 Three days to go, keep it PEZ all the way to Madrid.

Sidi Sport to the CosmoBike Show in Verona