Race Report: On a day that saw continuing fall-out from yesterday’s crash and subsequent expulsions it was a refreshing change to get back to the usual early break and sprinters’ finish at the seaside town of Málaga. The day belonged to the man who has tried and tried again to get a Grand Tour stage win this year and today he judged it to perfection: Aúpa Peter!

Best Tour of the Year!
We’re three days into this year’s third Grand Tour of the season and already La Vuelta is again proving to be the tour of the year! A major crash 30km from the finish of Stage 2 saw BMC’s Marcus Burghardt crash heavily and this morning it was announced that he wouldn’t start, suffering from a severely swollen knee.

Bad news for BMC but worse for Astana as the implications of Nibali’s ‘sticky bottle’ situation began to sink in… kicked off the race for taking a blatant free ride from the team car! And his DS kicked off with him and the team down to one car for a couple of days. Team manager Martinelli gets to stay even though he was in the car at the time of the incident. He tried to justify what happened by saying that this kind of thing happens all the time but that was the same argument used to make doping acceptable in the past. Good to see the Vuelta organizers sticking to the rules. For his part Nibali has apologized but says he felt let down by the team… there’s a marriage that’s looking ever shakier!

Today’s stage always looked set to favor the sprinters: a steep climb 8km after the start followed by a higher climb midway into the stage up the Puerto del León but with the last 60km being all but flat, and with temperatures up around 86˚F, nobody was in any mood to shake things up.

Orica-GreenEDGE was on the front of the bunch and when the gap went out to 3 minutes they upped the pace just to keep it within acceptable limits. By the time everyone came off the mountain it was back to 2:25 with Orica thinking about the sprint into Málaga. 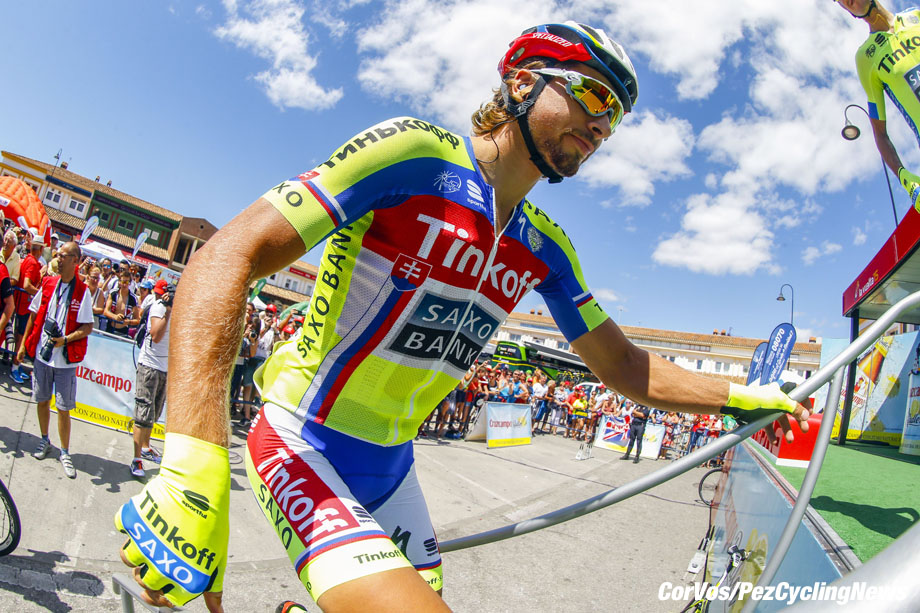 Baking Under the Sun
With the riders now heading towards Málaga the break was given their head and the gap stretched away through the heat haze. Heading out of Málaga and onto the lower slopes of the Puerto del León and the deficit was now 4:20 with Orica giving the nod to other teams to keep it within reach. Nobody was keen to get involved as there were still repercussions from yesterday’s crash. Paolo Tiralongo (Astana) called it a day and left to recover from his injuries which just added to the woes of the Kazakh team. Fabio Aru won’t have to fight Nibali for the lead of the team but his support is beginning to evaporate.

The Puerto del León, at 16km long is not too bad but there’s a nasty little ramp of about 15% about two-thirds of the way up.

Climbing Back
As the break headed up the steeper sections of the Puerto del León the gap to the bunch behind began to come down from its 4:20 lead. The break itself also began to fragment with Martin Velits losing contact on the harder section near the top and it was Omar Fraile who went over the top in first place to gain maximum points, adding to those he picked up earlier in the day. This means he takes the blue spotty top from the man in third spot, Pedraza, and will be KOM leader tomorrow.

Chava stretched things on the descent but the eight riders reformed as the roads leveled out albeit with a lead reduced to 2:20. With Tinkoff-Saxo having a dig at the front it was time for the break to drop the hangers-on and it was soon down to four: Fraile, Chavanel, Tjallingii and Gougeard.

And now the attacks happened. With the bunch closing in Tjallingii was first to make a bid to get away but he was quickly brought back. The bunch was at 1:20 but with the temperatures soaring, the gap was going in the wrong direction for the escapees.

Fall Out
Orica-GreenEDGE were thinking of their neo-pro Caleb Evans and this is the same Evans that Nibali named as the culprit from yesterday’s crash. Evans, though, has urged Nibali to get his story in order as he said he was at the back of the peloton when the crash happened. It seems Vincenzo is beginning to get a bit of a reputation for blaming the wrong person after his run-in with Tour winner Froome (Team Sky) in France in June.

Tinkoff-Saxo was pushing along as the race returned to the coast at Torre del Mar. There had been a small shunt in the bunch but Nacer Bouhanni (Cofidis) was on the ground for the second time in two days. Chasing the win, Sagan (Tinkoff-Saxo) had his men riding to make life difficult for the French sprinter.

Through the intermediate sprint and it was Chavanel who took the points from Tjallingii and Gougeard but now they were approaching the final 30km. 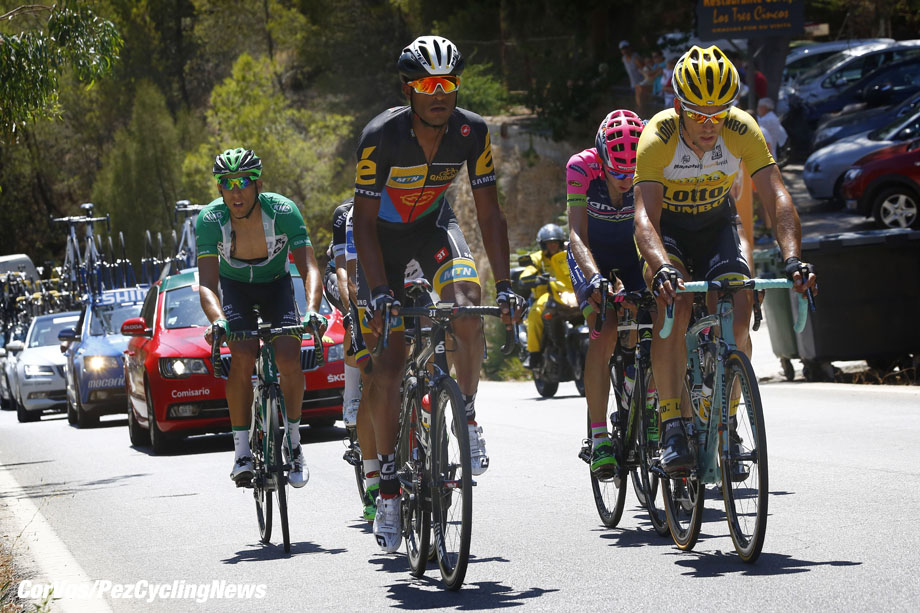 A hot day in the saddle for break and bunch

The Chase Down
Just after the sprint Tjallingii and Gougeard got away on their own and attempted to hold the bunch off as they ran back towards Málaga. No other teams were helping Tinkoff-Saxo but Giant-Alpecin was staying attentive as Sagan’s men brought the gap down. When it dropped to 20 seconds with 15km to ride Gougeard decided to turn off the gas and it was down to the never-say-die man Tjallingii to continue on his own… for about one more kilometer before being swallowed up by the peloton. All together with 14km to ride.

Rest and Recovery
The final rise up on the outskirts of Málaga was all on the autovia and nobody was pushing away so the sprinters were able to hold their positions. As the road headed back down from the 5km mark the speed was ramping up with the GC riders all at the front staying out of trouble until they hit the 3km safety point.

Right and left as the race snaked into town and the grand finale! And now it was the sprint teams in control as the GC teams pulled aside. All eyes were on Giant-Alpecin and Orica-GreenEDGE with Degenkolb and Evans in the mix. 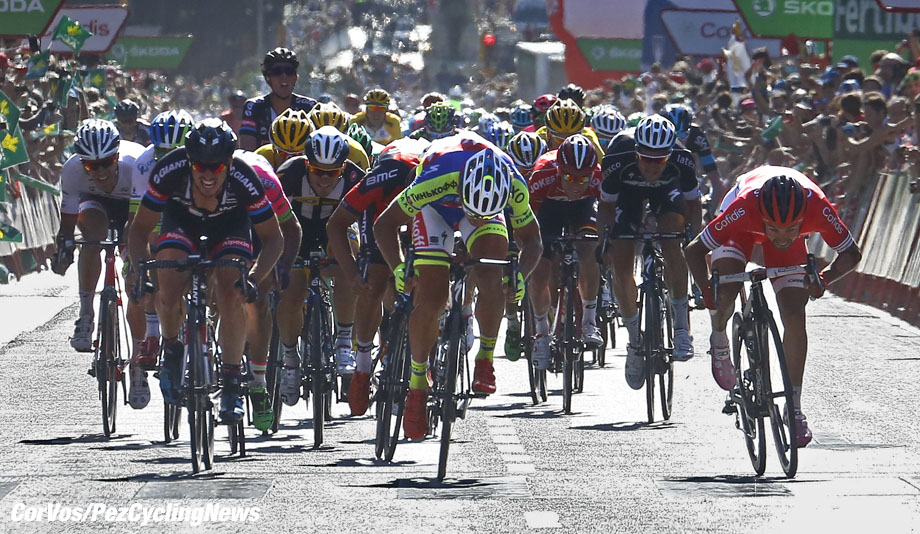 Final Km
They were streaking towards the line, Nacer Bouhanni having recovered from his brush with the tarmac. It all came down to three men and the first to go was Degenkolb but the man who has been desperate to get that Grand Tour win, Peter Sagan, came around him and was on his way to the line with only a fast-finishing Bouhanni able to do anything about it but ultimately having to settle for 2nd spot. Degenkolb finished in 3rd but the day belonged to Sagan and we could almost hear Oleg cheering from here. 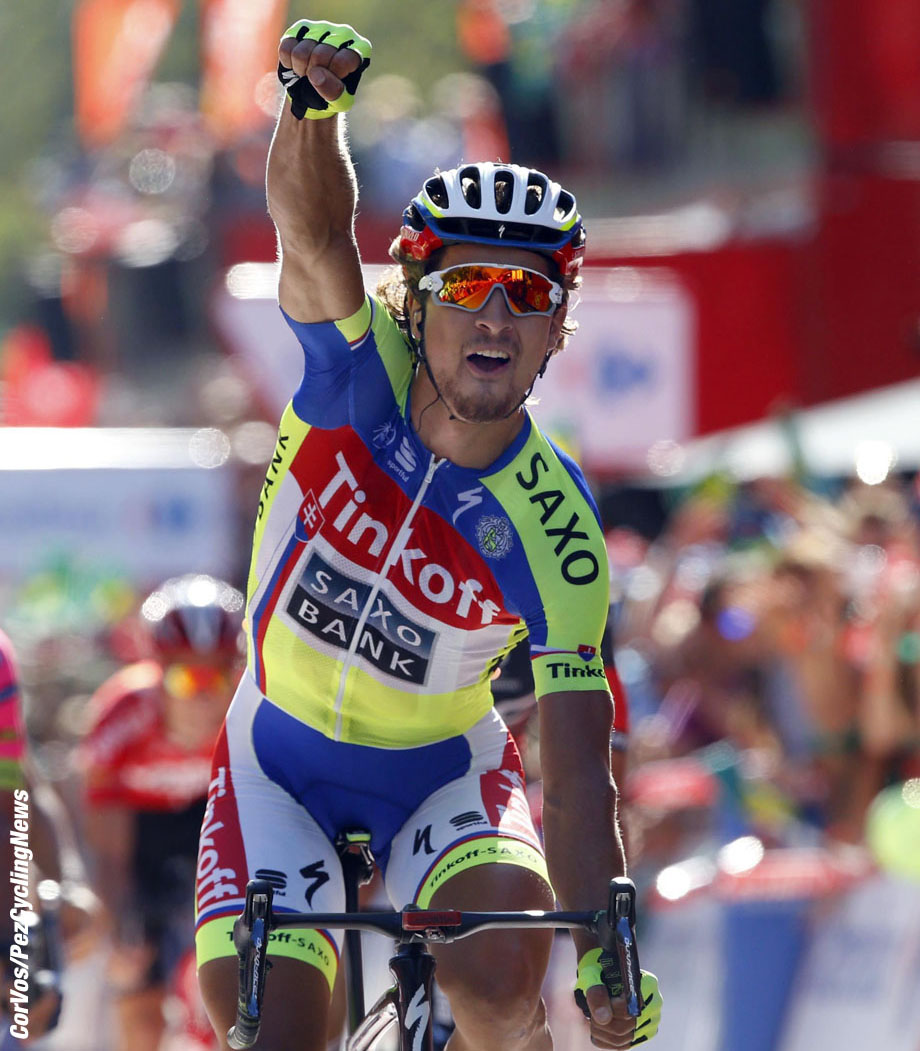 Onto tomorrow’s stage and a finish atop the climb to Vejer in what is sure to be another roasting day, keep tuned to PEZ!