Race Report: Orica-GreenEDGE did it again with one of its ‘Young Guns’ and this time is was Colombian Esteban Chaves who kicked his way to another stage win and to recapture the overall lead and the red jersey from Tom Dumoulin in 3rd place. Another perfect opportunity for an Orica man to swoop to victory as the Vuelta throws up yet more excitement.

A 200-kilometer stage in near 40ºC was going to be hard, and hard it was, but the speed and the final climb had as much to do with the toughness as the heat. A group of six headed up the road, but as expected it fell apart on the start of the final climb. Tour stage winner Steve Cummings went for a solo win from the eascape and nearly pulled it off, but was caught and dropped by the flying Esteban Chaves and the overall leader Tom Dumoulin trying to save red jersey. Chaves pushed on to take his second stage and the overall and now had 10 seconds on Dumoulin.

Stage 6 has two Cat 3 climbs in the last 70 of its 200 kilometers, but the parcours is far from easy before then. The first 30K’s after the start in Cordoba are steady; from then on the profile is very ‘lumpy’ before they hit the first climb, the Alto de Baeza, which climbs more than 500 meters. The second and final climb on the Alto de Cazorla looks like it only climb for 3 kilometers, an ascent of 210 meters, but in reality it is over 20 kilometers long and climbs about 400 meters. The last 3 kilometers are a sting in the tail though with twists and turns to the line. The temperatures are high, at the start it was 38ºC in the shade, at the finish it was a few degrees lower.

The break of the day
There were quite a few failed attempts to break away in the first 50 kilometers, until Cyril Gautier (Europcar), Niki Terpstra (Etixx – Quick-Step), Kristijan Durasek (Lampre-Merida), Peter Velits (BMC), and Steve Cummings (MTN-Qhubeka) made good their escape and after 70 kilometers they had over 3 minutes. Team Colombia wanted a rider in the break and sent Miguel Ángel Rubiano after the front group. As he was tying to gain the head of the race he crashed, but was soon up and eventually, with 120 kilometers to go, made the connection. It must have been hard work as 20 kilometers later, at the half-way point, he was dropped.

Yesterday the rumor mill was working overtime saying that the Europcar team had found a new sponsor, no more news on the deal, but Europcar rider Pierre Rolland will be with the US team Cannondale-Garmin for 2016. “I am very honored by the trust placed in me by Cannondale-Garmin and am determined to ride well for them,” said Rolland. “This is truly a great opportunity for me, and I am very excited for 2016.”

After Rubiano’s slip from the front, he managed to rejoin the front group but had a tough second chase. With 90 kilometers remaining their lead was at 4:40 with Giant-Alpecin leading the peloton. This is one of the strongest breaks we have seen in this years Vuelta, but that may work against them as they won’t be allowed to gain a big lead. Gautier is the best placed in 34th place at 3:07 and was in the virtual lead at this point.

Alto de Baeza
With 75 kilometers to go, the six up front start to loose time and were pulled back to 4 minutes as they approached the start of the first categorized climb of the day, the Alto de Baeza. With 53 to go the lead was down to 3:30 as Movistar put a rider amongst the Giant chase train.

The Cat 3 Baeza climb is 11.8 kilometers long with a final kick of over 6% for the last 3 kilometers. Gautier took the KOM points at the summit, next there was a long flat section before the descent. Into the final 40 kilometers and the race worked its way through the many olive trees and the gap had dropped to 2:40, Giant-Alpecin and Movistar still had the control of the peloton. At the back there were many riders dropping back for bidons, it was very hot out there, all the dark colored jerseys were white with salt.

Sky started to move forward as the race entered the final 20 kilometers and the lead came down to 1 minute. 15 out and the gap was 30 seconds and through the intermediate sprint Rubiano rolled through first ahead of Terpstra and Durasek.

With 11.5 to go Rubiano attacked and Cummings jumped after him and carried on through to go on a solo attack, Terpstra dropped the others and headed off after Cummings. The big Englishman was in the TT zone with a flat back position and built up a minute lead over the peloton as they swallowed up the remnants of the break, Terpstra was somewhere between as they entered the last 8 kilometers. The real battle will come with 3 to go. 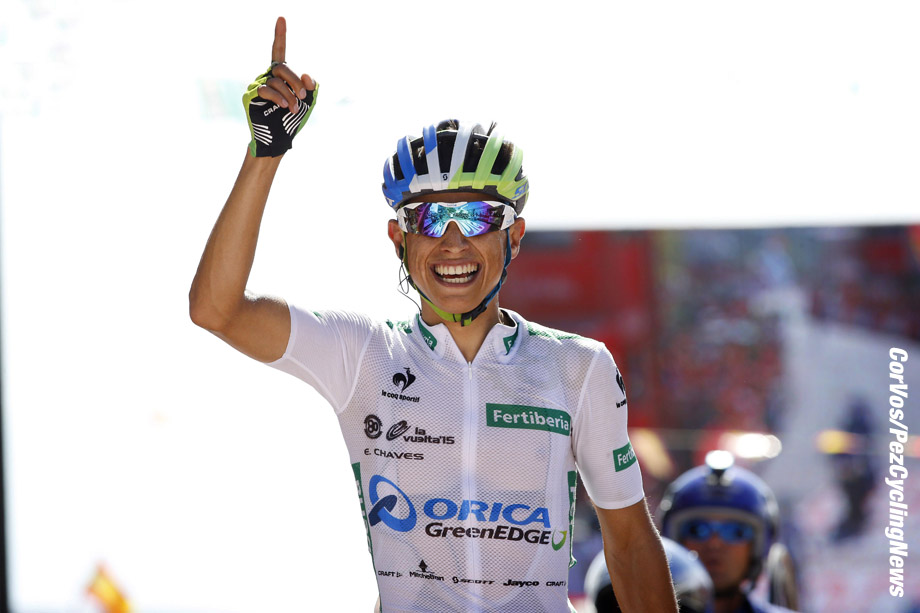 Could that smile get any bigger?

The climb to Cazorla
Cummings was a kilometer ahead of the bunch and holding a speed of 32 kph, the peloton looked less than organized as no team would take charge of the situation. The speed was fairly hot in the chase bunch, but there were riders going out the back. Movistar had decided it was time to work. Through the fast drop before the climb proper and Cummings had lost time and was down to only 18 seconds advantage.

Esteban Chaves (Orica-GreenEDGE) attacked from the bunch at 2.4 K’s out and passed Cummings who was stationary. Again Giant kept the speed high for Tom Dumoulin, who didn’t wait and jumped away after the little Colombian to try and keep his 1-second overall lead. Next to go was Dan Martin (Cannondale-Garmin), he was chased by his cousin Nico Roche (Sky) with Valverde and the others on his wheel.

Esteban back in red
Chaves had the gap, Dumoulin had missed his chance on the less steep section and was caught by Dan Martin Cannondale-Garmin) in the last meters. Chaves kept the pressure on and won the stage by 5 seconds from a fast moving Dan Martin with Dumoulin on his wheel. All the big GC men were next across the line on the wheel of Ruben Plaza (Lampre-Merida) at 11 seconds. 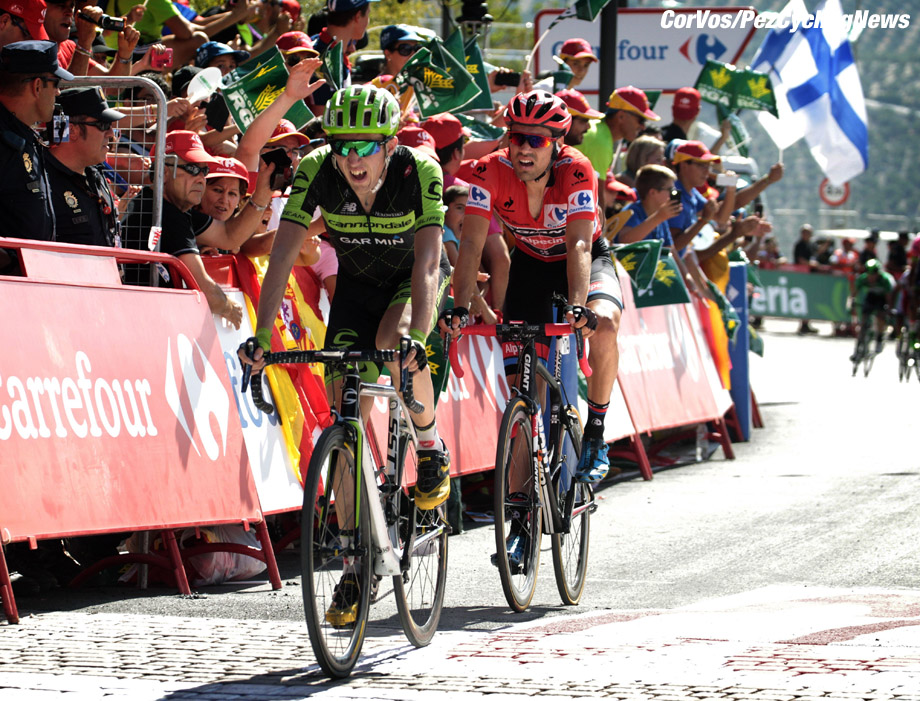 Dumoulin gave it everything to save his red jersey, Dan Martin took 2nd on the stage and 3rd overall

The climbing has started, tomorrow will be tougher, keep it PEZ.

RPM: The Brand that is Revolutionizing Style