Race Report: It wasn’t a classic but BMC were one of the few teams who went flat out in the 2015 Vuelta’s stage 1 team time trial to take the victory and the first leader’s jersey on a neutralized stage that means nothing to the overall.

Once we knew that the GC times had been neutralized for the stage it was clear that it was going to be a farce. All the teams in the top 10 took risks on a course that was unusual and technically demanding but not quite the minefield we had been led to believe. LottoNL-Jumbo set the early pace with a time of 8:18 minutes but they were overhauled by Orica-GreenEDGE who put 7 seconds into them. That was looking like the winning time but, the surprise package of the day, Tinkoff-Saxo beat them by less than a second. BMC were the last of the teams that tried to set a good time and then flew along the course to beat the Russian super team by a hundredth of a second to take the stage and the leader’s jersey. 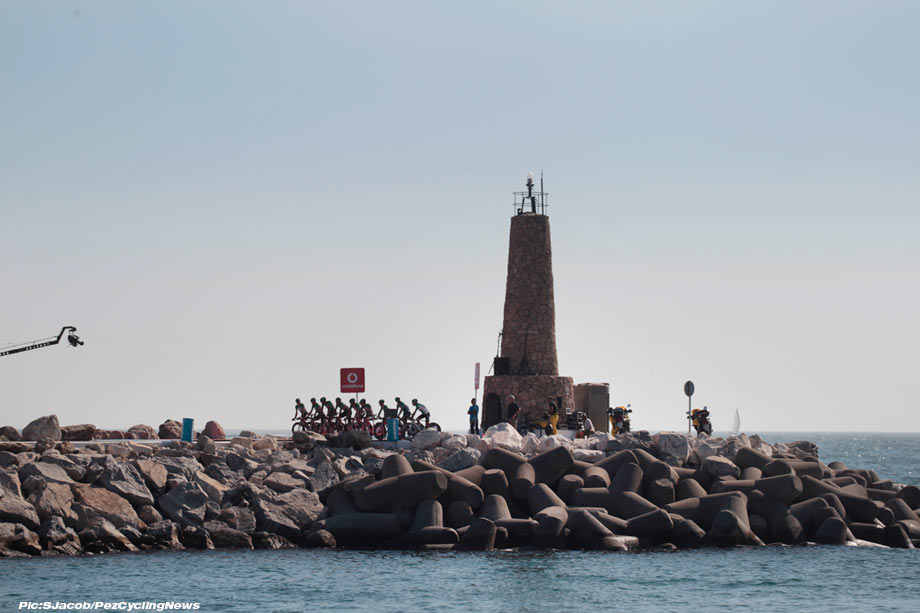 Route
We’re in the luxury Andalucian resort of Puerto Banus for the 7.4km team time trial which will end in Marbella, a resort popular with hedonistic British youths keen to smash up their livers before heading off to university. You could forgive the Vuelta organisers for thinking that their race is the forgotten Grand Tour but thanks to a ridiculous route that takes riders over a variety of different surfaces including tarmac, rubber matting, wood bridges and sand they’ve ensured that the cycling press is focused firmly on them this weekend.

The riders have protested so the UCI have neutralised the times for the stage. The stage win and red jersey are up for grabs but there’s no opportunity to put any time gains into your rivals yet. If the teams of the overall contenders do take it easy then this could be the perfect chance for teams like Caja Rural, MTN-Qhubeka or even Columbia to get an early stage win on the board.

El Comienzo
The first team off were MTN-Qhubeka who will be focussing on stage wins although, they do have young South African star Louis Meintjes for the overall. As soon as they set off it was clear that the course was really too narrow to keep rotating the lead rider. MTN-Qhubeka were seeing the course at race pace for the first time but as Dan Martin (Cannondale-Garmin) commented on a tweet, the first riders will benefit from having smooth sand whereas once the race vehicles and hundreds of riders have been over it it will start to look like a freshly ploughed field. 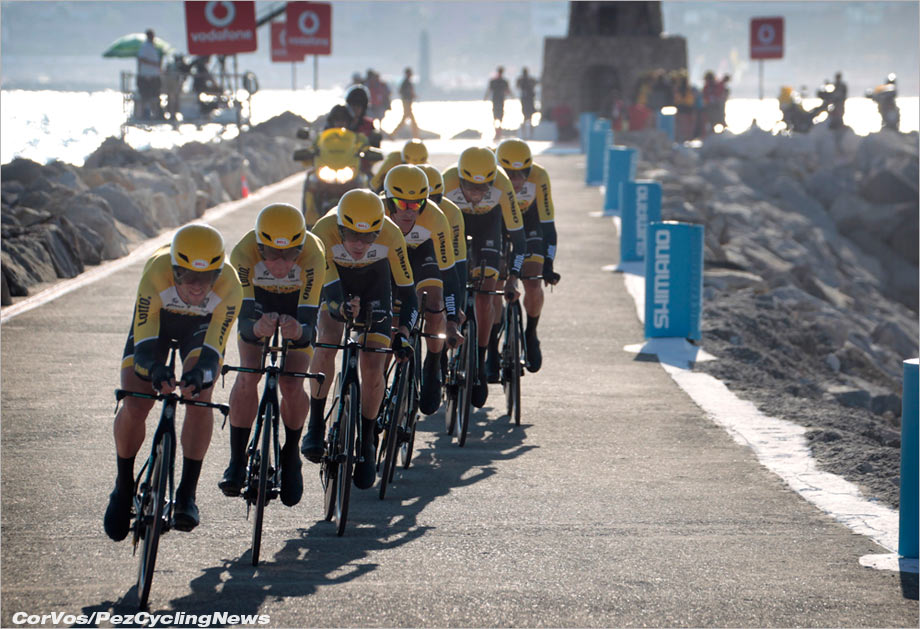 MTN set the early pace at 8:40 which withstood challenges by Columbia and FDJ. The fourth team off were LottoNL-Jumbo who took 22 seconds from the leaders to set the time to beat at 8:18. It’s been a horrible year for LottoNL, they’ve only managed four UCI ranked wins for the whole year but after this ride they might be in a position to chalk up a Grand Tour stage win. Ag2r were the next team in but they’d clearly had a siesta halfway round as they finished up 52 seconds down with an average speed less than 50km/h.

Cannondale-Garmin were the next in and they were successful in beating Ag2r’s slowest time with a 9.30, over a minute down. They have the potential to put on a good show in the GC with their three headed attack of Dan Martin, Andrew Talansky and Tour of Utah winner Joe Dombrowski. 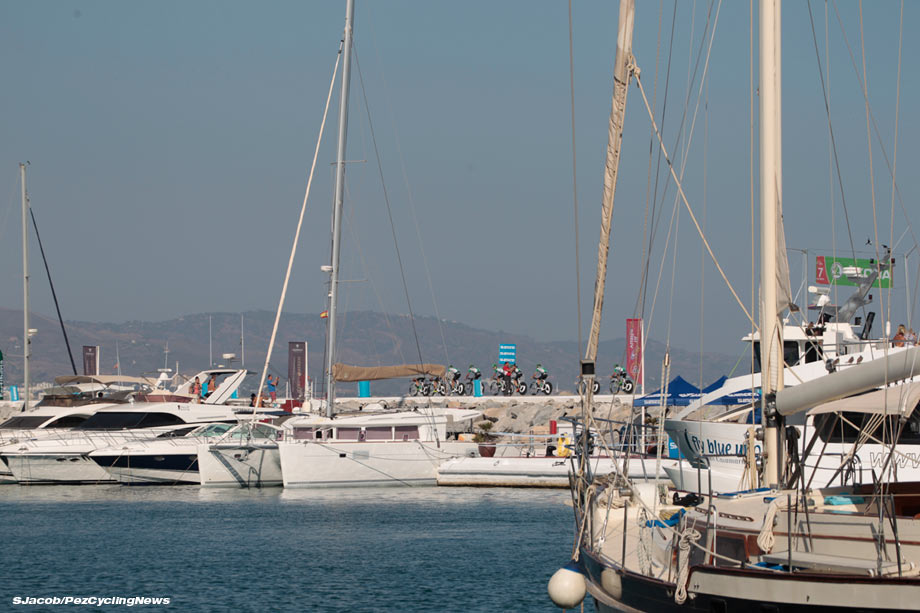 Relaxing Day at the Beach
The stage was turning into a split between those teams who cared and those who didn’t. Both IAM and Cofidis were trying and IAM set an 8.37 to move into second place before Cofidis beat them by less than a second to overtake them.

Caja-Rural, who had brought veterans Amets Txurruka and David Arroyo and young sprint talent Pello Bilbao, were another team who were going for it today. They put 9 seconds into both IAM and Cofidis but they were unable to overhaul LottoNL-Jumbo who were still the team to beat. They were glued to the TV though as Orica-GreenEDGE set off in search of a stage win.

Before they came to the line there was the small matter of Team Europcar. They could’ve walked the course quicker as they came in 2.07 down on the leaders. Would anyone try and go slower than that time?

Trek Factory Racing and the returning Fabian Cancellara were a serious risk to Orica’s time but in the end they didn’t have the firepower to overtake the Aussies or LottoNL and they ended up in third for the time being, 10 seconds down.

Peter Sagan’s Tinkoff-Saxo start the Vuelta with stage win ambitions for the Solvakian and GC ambitions for Rafa Majka. What they certainly didn’t have was a strong TTT group, so it was a massive surprise to see them come into the finish within sight of Orica’s time and then beat it by less than a second. Tinkoff were now in a position almost unknown to Sagan this year: first. Realistically they only had four teams left who could beat their time; Sky, Astana, Movistar and BMC.

Etixx-Quick Step and Giant Alpecin passed through without troubling the fastest time but there was a little bit of drama as Niki Terpstra was heard yelling at his team mates for not giving enough during the stage. Frankly it was good to have a bit of excitement as the stage was far from a classic at this point.

The Final Stages
Lotto-Soudal were the next team to finish with a time of 8:28, enough to put them just ahead of Caja Rural in 6th. Their aims for the Vuelta will be stage wins but they also have Jurgen Van den Broeck who could mount a GC charge. They also have Adam Hansen who is riding in his 13th consecutive Grand Tour, if he finishes it then he will have finished 17 of his 20 three week races.

BMC were the next team off, they will be looking to Van Garderen in the GC. In this stage though they had quickly dispatched their four weakest members and were storming towards a high stage placing and maybe even the win. At the intermediate check point they were ahead of the Russian team but they were going to have to ride a long way with just five men. Coming up to the line and it looked like BMC were going to fail to overhaul Tinkoff until a late burst from Peter Velits took them over the line just a hundredth of a second ahead.

Heading into the evening, the shadows were long and the breeze off the ocean picked up which was good news for BMC. Astana were the next guys in but they were happy to take it easy and finish 12th place.

Sky and Movistar were on course but neither team looked like they were on the rivet. The Spanish team snuck inside the top 10 but it was time for BMC to pop open the champagne and celebrate another Grand Tour leader’s jersey.

Sky and Katusha were still to finish but neither were going to challenge the podium places and will instead be looking to the hilltop finish tomorrow for Froome and Rodriguez. Sky finished in 19th place outside the 9 minute mark, not really any point in donning the skin suits and aero helmets for that kind of time. Katusha came through in a similarly relaxed time of 9.04 to wrap up the stage.

It’s not been a great start to the Vuelta but the race starts properly tomorrow with a hilltop finish to Caminito del Rey.

Interview: Red Jersey Race Leader Peter Velits (BMC):
How does it feel to find yourself in the red jersey?
Well the key was our tactics really. After checking the course, we had decided to start fast with three guys in the lead that we were going to sacrifice along the way. And it was the right tactics. We proved once again why we are the world time trial champions.

Was it planned for you to cross the line first?
No it wasn’t. We did not discuss whether me or someone else should take the jersey. We all took our turns and that’s the way it went.

Still you’ll be a happy man tomorrow?
For sure. It’s a strange way to be in the lead of a grand Tour but I’ll be proud with the red jersey on tomorrow.