Race Report: It was a day that saw tactic and counter tactic, attack and counter attack and it was the big Dutch rider from Varsseveld that played it beautifully to take the win atop the Col d’Aubisque. Not far behind, Simon Yates had seen his team put a super plan into action and he came close to outsmarting everyone else on the day. As it was, he rode himself into a podium position in the general classification. It was a day full of action and one that didn’t disappoint as Robert Gesink won his team’s first stage in this year’s Vuelta atop the famous Col d’Aubisque. 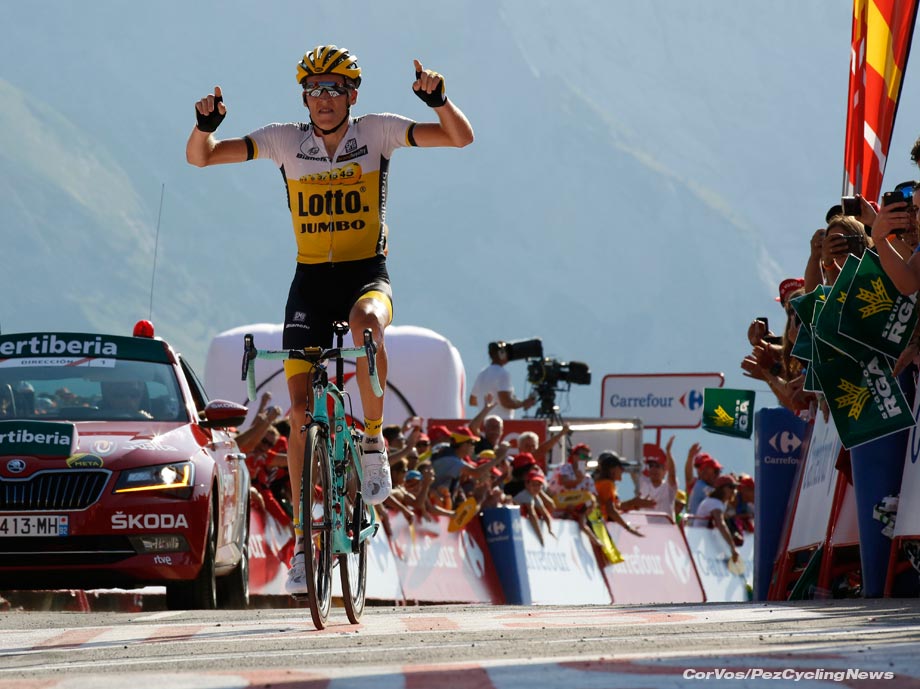 Queen of Stages
It was always going to be billed as the Queen stage. In a race with more mountaintop finishes than any other this year, today’s Stage 14 from Urdax-Dantxarinea to Aubisque – Gourette would test the riders to the max…and this, more than anything else, was the reason for the go-slow yesterday.

With three 3rd category climbs (Col Inharpu, Col du Soudet, Col de Marie-Blanc) and finishing atop the fearsome Hors Categorie Col d’Aubisque it would come down to a fight between the GC contenders with Nairo Quintana (Movistar) on the hunt for more time. Come the individual TT at Xábia on Stage 19 he’s going to need the biggest cushion he can get. 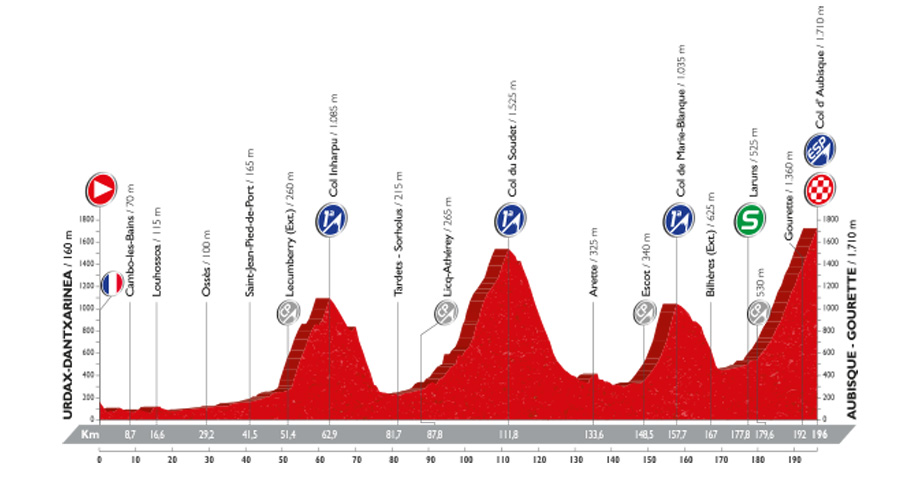 From the Gun
As soon as the flag came in Omar Fraile (Dimension Data) made a break for glory but with riders firing around him, some coming and some going, it was all back together. And then it wasn’t as a huge group clipped off the front and began to gain time. 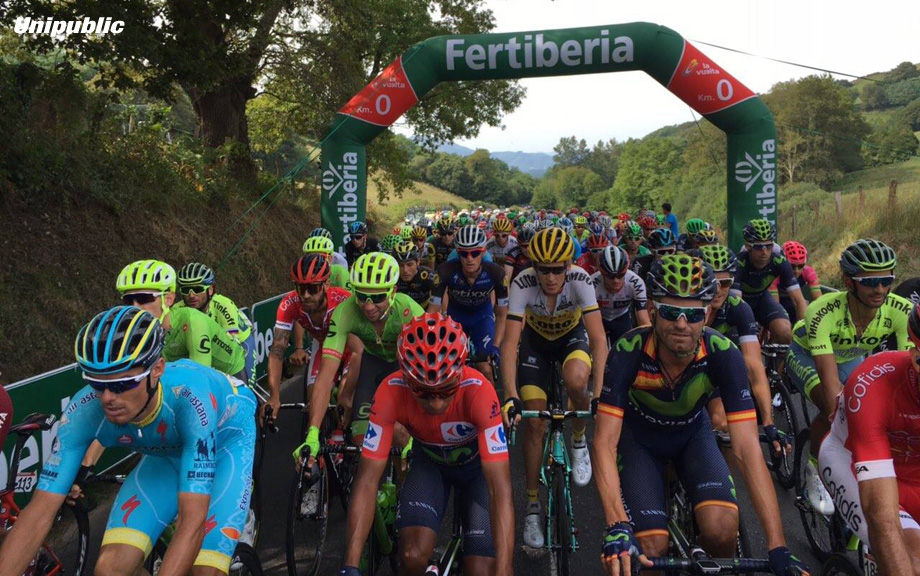 They set about building a lead with only Team Sky (Movistar had three men in the break, Sky only had David Lopez) watching to ensure that they didn’t go too far ahead. With a couple of riders (Moreno and Pardilla) only just over 5 minutes in arrears overall they were never going to get the 20-minute gap of yesterday.

Col Inharpu
The breakaway riders were working well and had established a gap of 4:30 as they took on the exposed slopes of this 1st cat mountain. Approaching the summit and that man Fraile took off in search of climbers’ points easily getting the better of Geniez and Elissonde. Geniez was keen to push on and was flying down the tricky descent…so fast that he overcooked a corner and almost went over the edge.

Behind, Janse Van Rensburg made the same mistake and crashed. As the peloton came over word had gone backwards and they were taking it easy on the way down. The gap went out to over 5 minutes but once back in the valley Sky brought it back down closer to 4:30.

Col Du Soudet
Onto the next mountain and things began to heat up after the leaders passed Pierre Saint Martin at which point the gradient kicked up. Riders were now falling out of both the break and the main peloton. Van Rensburg had been picked up by the bunch but was looking none too comfortable.

News of abandons began to filter into the pressroom, the highest profile one being Phillipe Gilbert (BMC). He was not alone though as Davide Malacarne (Astana), Johan Le Bon (FDJ) and Angel Madrazo (Caja Rural – Seguros RGA) all climbed off.

Sky had been working hard and had reduced the gap to 3:45 as the leaders neared the summit. Once again it was that man Fraile who took off in search of points. Elissonde went with him but in the end never challenged for the crest.

Coming down the mountain and the gap went out again as Sky made sure their leader stayed upright for the latter part of this stage. This saw the gap go out to almost 6 minutes and Movistar’s Dani Moreno became the virtual Red Jersey.

It was status quo as break and then peloton took on sustenance as they covered the final kms to the foot of the Marie-Blanc where the journos were expecting the fireworks to start. The Team Sky riders were calmly going about their business but up ahead it was Orica-BikeExchange doing the bulk of the work in the breakaway and they were possibly preparing the way for an assault by Esteban Chaves. This was making life difficult for some and riders like Eiking and Campenaerts were finding the going too hot. 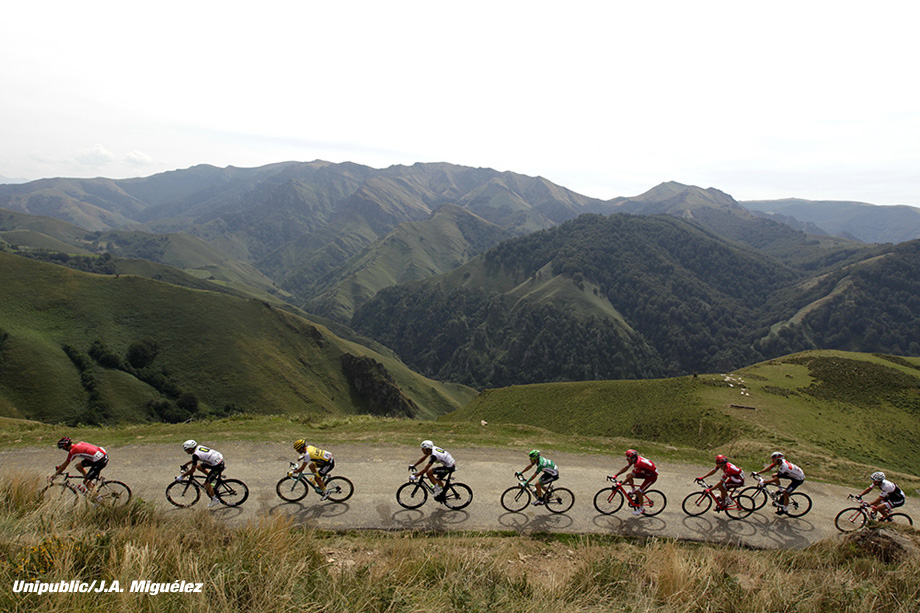 Col de Marie-Blanque
Onto the lower slopes with 45km to run and the gap had gone out to 6:25. All of the pressure was on Sky to bring this back but Tinkoff riders were beginning to gather closer to the front. This was having an impact as the gap began to drop but Sky were using up riders and Pucci slipped away from the bunch.

Up front, Simon Gerrans, having done a lot of work on the run along the valley, was being shelled, as was Fraile, his candles all burnt out by now. The 9km climb, with a maximum gradient of 13.5% was taking its toll with more riders slipping away.

Battle Plan B?
Jack Haig (Orica-BikeExchange) jumped away from the head of the peloton and at first it looked like a strange move. That was until his teammate Simon Yates also jumped and together they set off in pursuit of the splintering breakaway group. This could have been the reason for Gerrans dropping away from the leaders.

The chase duo had found 50 seconds before Yates decided to move away from Haig and try to hunt down the others. Up front, Elissonde had driven for the summit and with Geniez and Fraile out of the action he took maximum 10 points over the top. This also had the effect of seeing a small selection as six riders gained an advantage on the long descent. Bakelants, Bennett, Elissonde, Silin, Bernard, and De Clercq were hustling down the mountain and had left the others trailing 30 seconds behind.

Yates came over the summit to see Gerrans and Cort virtually waiting for him and the Orica trio forged on. They were now only 4 minutes back from the leaders but they had 90 seconds over the peloton as Movistar finally woke up to the tactics being played by Orica. With Yates only just over 3 minutes back on GC he was the major threat and Movistar and Sky had not seen the move as Yates and his teammates rode down the mountain in search of the others…and he still had Keukeleire up the road.

As they flew along the valley road towards the Aubisque, the Yates group was picking up the remnants of the original breakaway and was closing in on the pursuit group of Van Garderen. Tinkoff and Movistar were now helping Sky back in the peloton as Yates was now a threat to the overall positions of both Alejandro Valverde (Movistar) and Alberto Contador (Tinkoff). 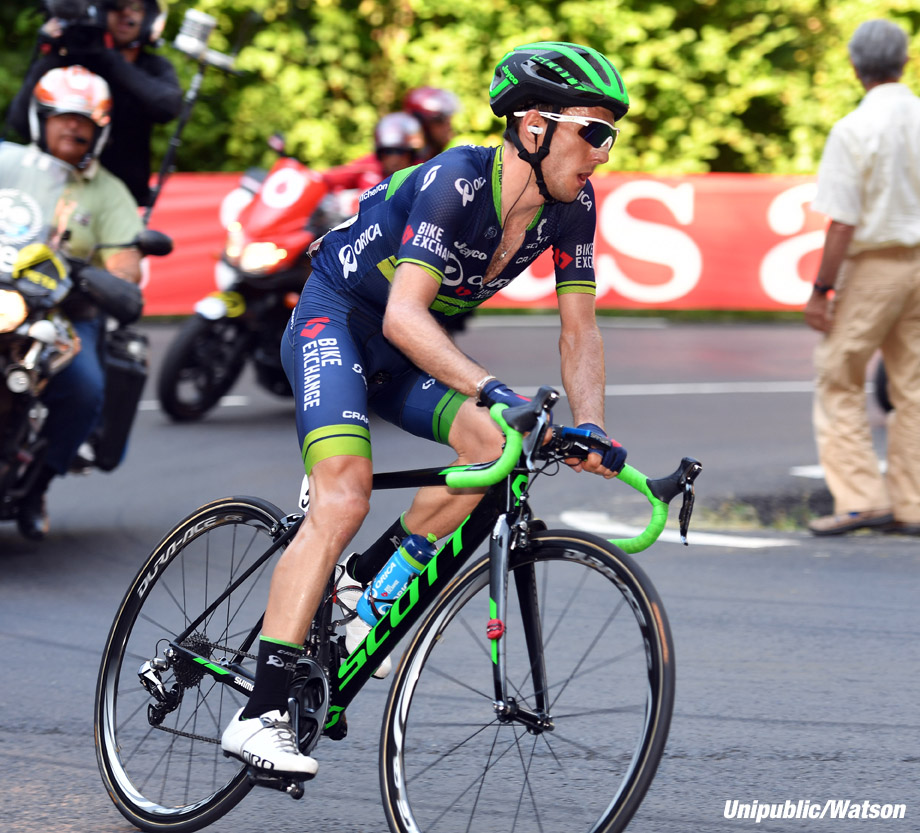 Aubisque: Hor Categorie Monster!
Onto the lower slopes of the 16km climb and the six men in front had a gap of 24 seconds over the chasers. The Yates group was back at 3:34, having now been strengthened by Keukeleire and the main peloton was at 4:47.

Despite all the action on the road, Movistar, Orica and Sky were all aware that Quintana would have to do something if he was to find the needed time cushion over Froome for the TT later in the week.

The leaders were forging on and were holding a gap of 30 seconds to the chasers. Behind, Yates had burnt through his teammates and was on the hunt on his own to get up to the chase group, now only 3 minutes away. 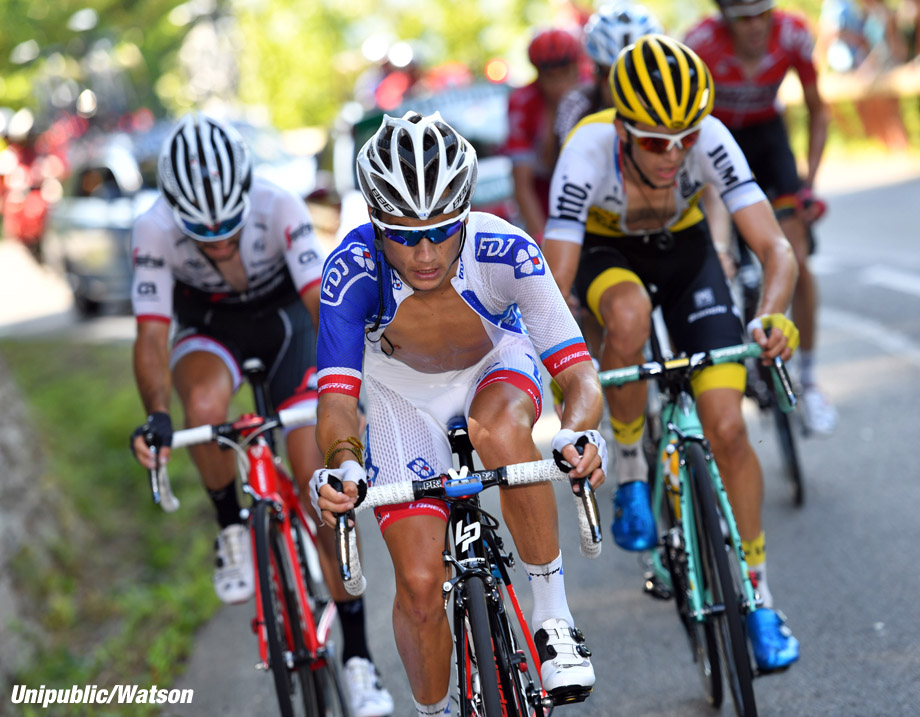 At 9km to go Elissonde and Bakelants moved away from the leaders. Gesink read the move and attacked the chasers at the same time. He pushed past the remnants of the lead group in a bid to get across to the smaller lead group. Meanwhile, Yates had closed the gap to 1:44 with the peloton holding at 90 seconds further back.

All of the main men were still together but they were now looking at each other…and then Quintana put in an effort to test the others. Froome looked troubled for a moment but then changed gear and came back to Quintana with Contador riding back in. The effect of Quintana’s attack was that his teammate Valverde was distanced.

Up front, and Gesink attacked the lead group with 6.7km to go and just approaching the most difficult section. This was a serious move for the stage and with Yates now at 1:20 Gesink wasn’t prepared to hang around. Hanging on for grim death was Jan Bakelants as he sought to stay with the Dutchman.

Sammy Sanchez (BMC) had seen the tactics of Simon Yates and put in his own attack on the GC contenders but all eyes were now on the lead pair of Gesink and Bakelants, with the chasers trying to get back to them.

With only 5km to ride, Yates was trying to catch them and he was riding his way up the general classification. He was catching riders all of the time and was now just over a minute down on the leaders. He caught and passed the chasers and now it was just the leaders ahead by 1 minute with 3.6km to ride.

Valverde had not yet got back to the GC group but Sanchez had joined Hermans and was pushing away from the Quintana group. 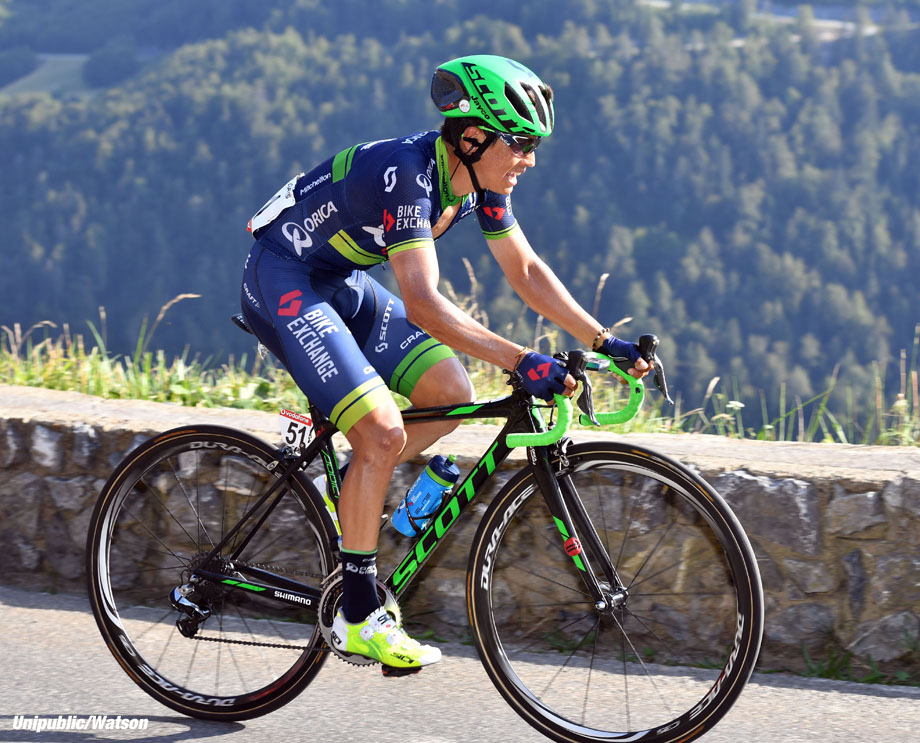 GC Attack
On the steepest section and Quintana went again, putting Froome under pressure. The Sky man didn’t panic and was soon back to his wheel, in the company of Contador and Chaves. And then Chaves went, clearly wanting to enjoy the Orica party.

With Froome and Quintana looking at each other, Contador tried a dig only to see Quintana go again. It was punch and counter-punch and now Contador was distanced. Now it was Quintana and Moreno with Froome and then the Columbian went again. Froome battled back and they passed Sanchez.

Up front Bakelants had faded but had been replaced by Elissonde and Yates was behind the lead pair by 40 seconds with 1400m to run. 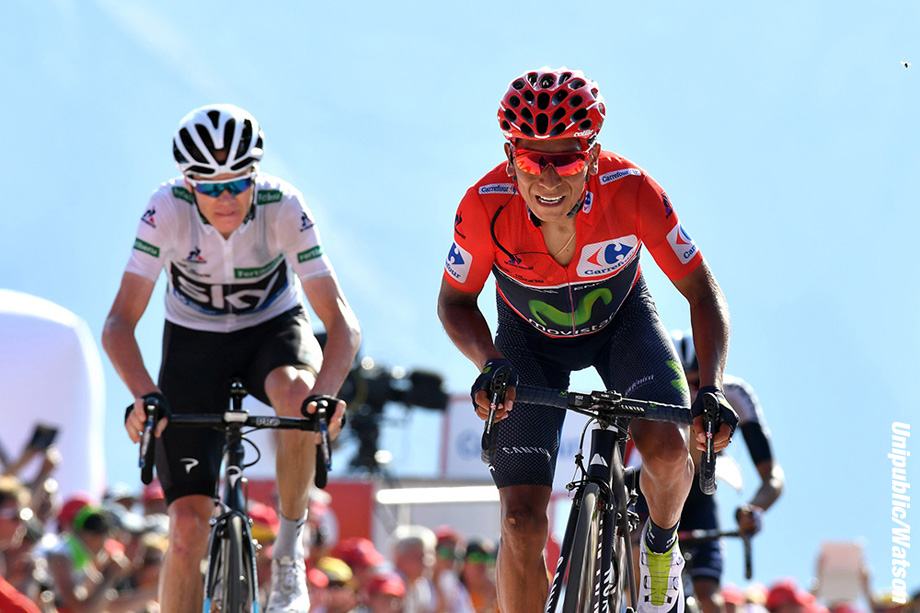 The overall was down to Froome and Quintana with Quintana attacking over and over again, trying to disrupt Froome’s rhythm. Attack, catch, slow and attack!

Final kilometer and Silin had reached the two leaders. Gesink was looking strong with Silin good in a sprint and Elissonde having used loads of energy earlier on. Silin was ramping up the pace…and then Gesink went for it! It was a slow-motion sprint as Silin and Elissonde struggled to get on terms but 20 meters from the line they knew the Dutchman had played it beautifully and he took a superb stage win.

Yates crossed the line 38 seconds back and everyone turned to the finish line clock to see what advantage Yates had achieved. Quintana was pushing all the way to the line in an attempt to take any time he could but Froome was living with him all the way and they finished 1:48 back, with Contador a further 20 seconds behind. No sign of Valverde as Yates displaced him in the overall. His teammate Chaves had ridden well and was now 3rd in line with the Englishman 16 seconds back.

A fabulous stage, on fabulous terrain and it will be the LottoNL-Jumbo and Orica-BikeExchange teams that will be riding high tonight.