Vuelta’17 Roadside: The 2017 Vuelta a España kicked off in Nîmes on Saturday and PEZman Daniel Thévenon was there to take in the fun. The Spanish Grand Tour started with a 13.7 kilometer team time trial which passed through the Roman amphitheater, but Nîmes was a hubbub of cycling activity. 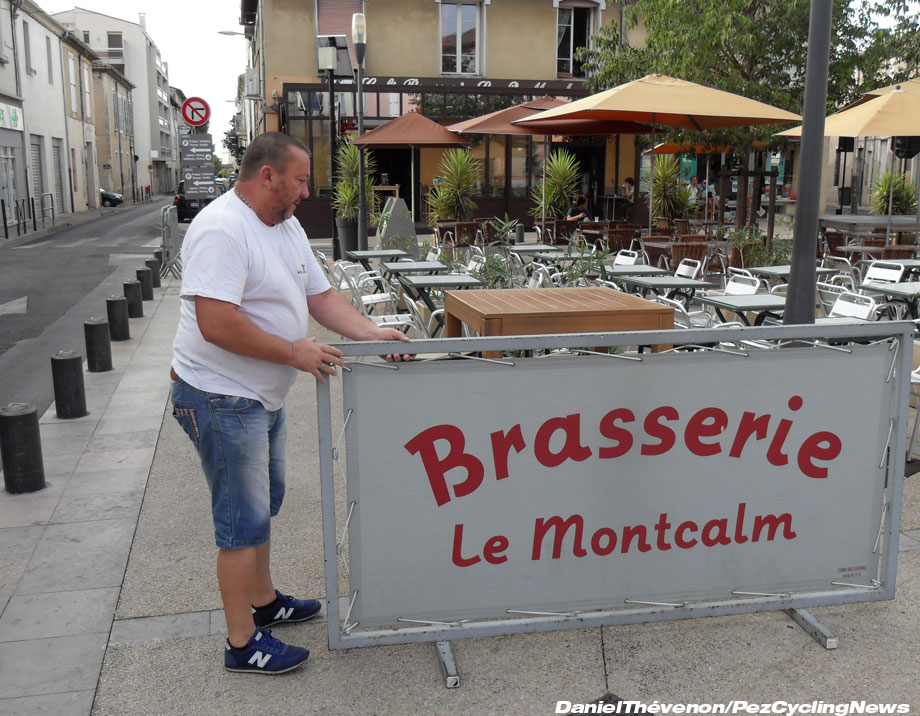 Saturday morning in Nîmes. The owner of the Brasserie Le Montcalm arranges the terrace of his establishment. “The Vuelta? Oh, it’s great for business. I’m expecting a 60% increase in sales.” It will be anything but calm here in a few hours, when the Tour of Spain’s opening stage, a team time trial, commences in the streets of the French City. 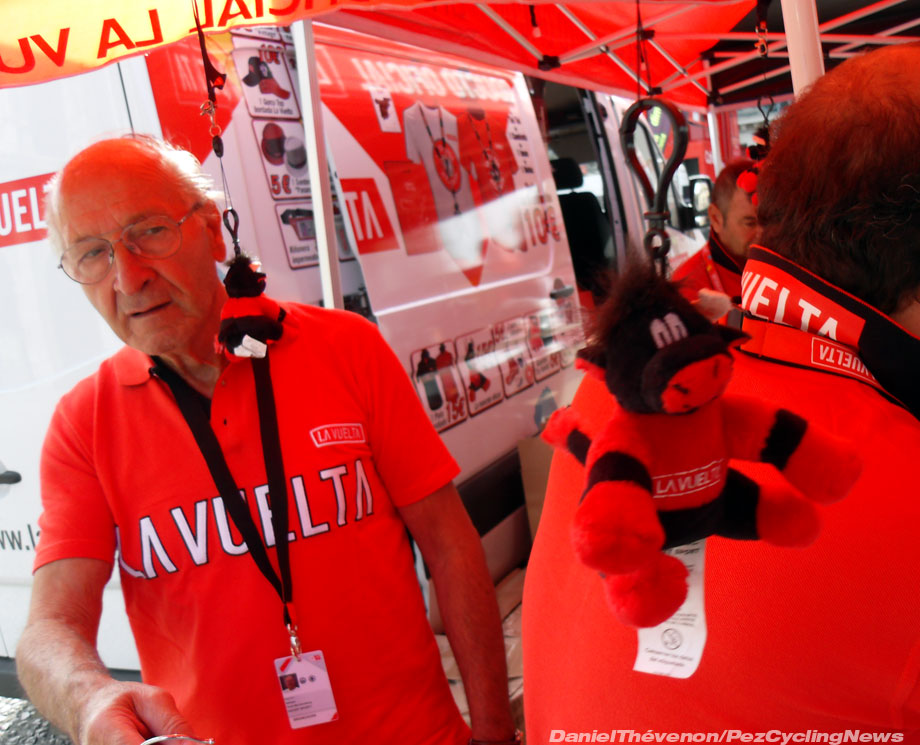 Vendors in red shirts set up stalls and lay out the Vuelta’s official merchandise, including miniature models of the race’s mascot, Tei-Tei the bull. When the Giro d’Italia visited France last year, its wolf mascot, Wolfie, caused such a furore among the local farmers that it was prevented from crossing the border. With Tei-Tei, by contrast, the Spanish are preaching to the converted in this tauromachy-crazy region. 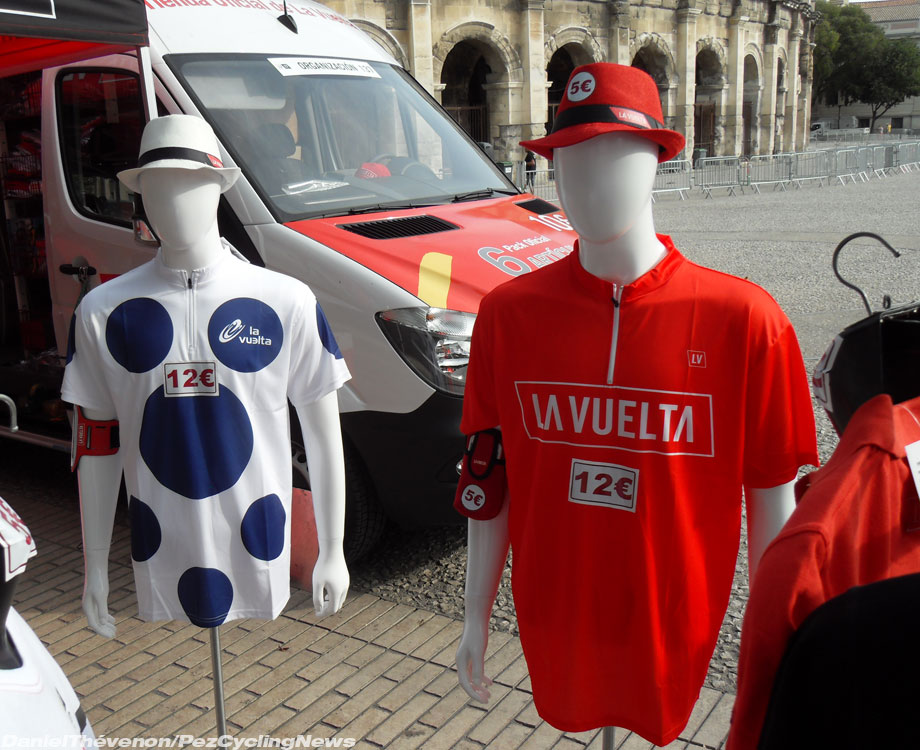 El Maillot de Lunares and el Maillot Rojo are on sale at the Tienda Oficial. Shoppers are encouraged to come early before these get snapped up by Contador. This leader’s jersey costs a mere 12 euros, a real bargain. The eventual winner of the Vuelta can expect to pay a significantly steeper price. 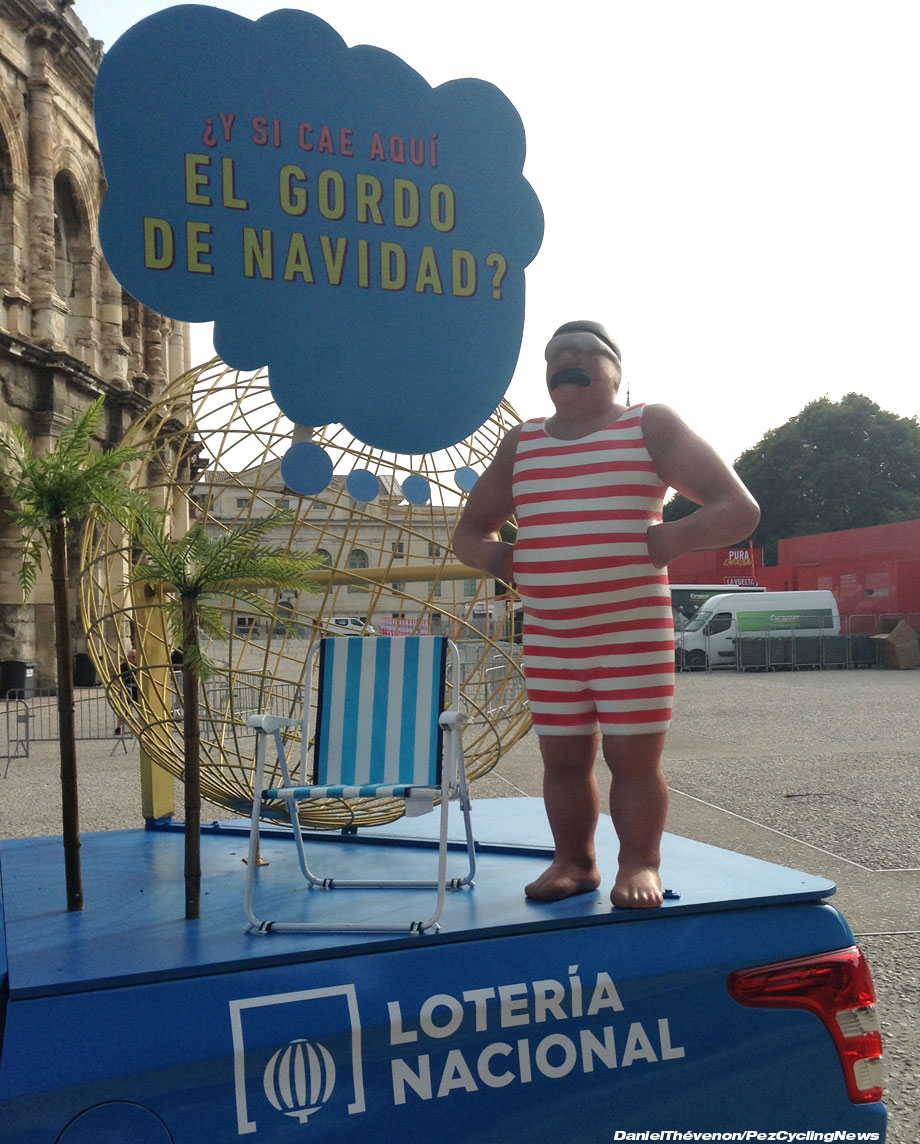 A vehicle of the Vuelta’s publicity caravan is parked in front of the arena. The inscription on the thought bubble, since you ask, translates as “And if it falls here? The big Christmas?”. No, you didn’t mishear that. 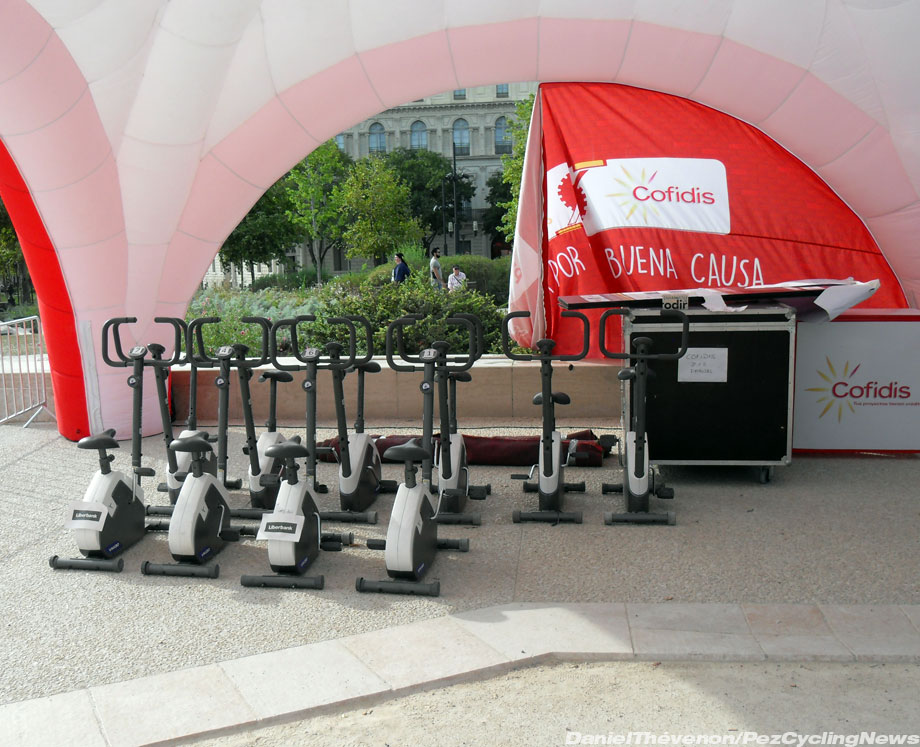 There have been rumors about cuts to Cofidis’s budget for some time but the naked truth is now emerging. 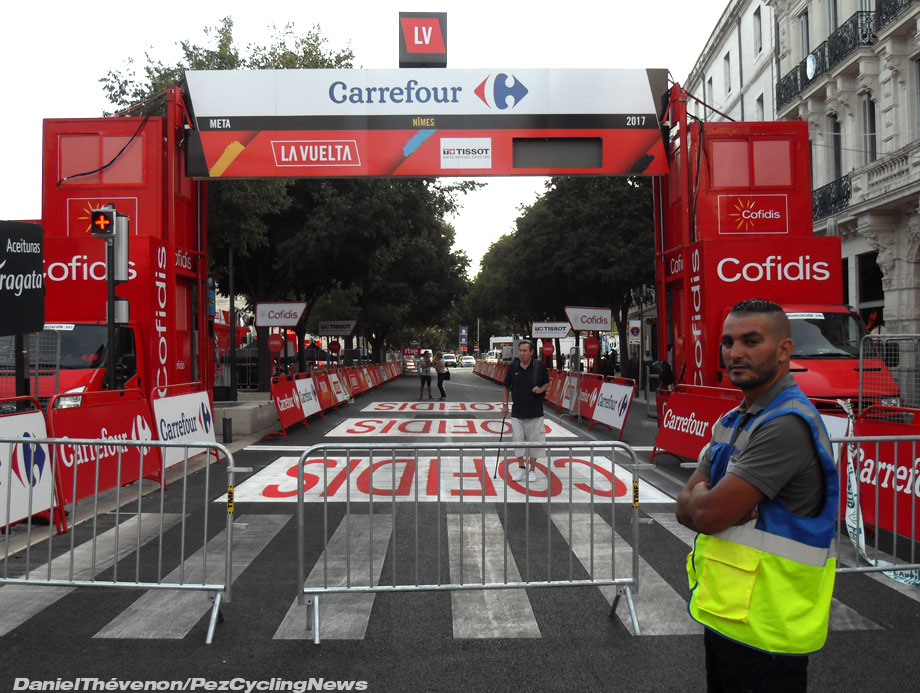 The day’s course will be 13.7 kilometers in length and mostly flat, but watch out for the ‘Alto de Nîmes’, a mid-course ascent that rises to an estimated altitude of 100 meters, a sort of Nîmois Angliru. “Muy tecnica” is how race official and former rider Fernando Escartin describes the twisting and turning parcours, which will include a passage through the arena via a track specially created for the occasion. 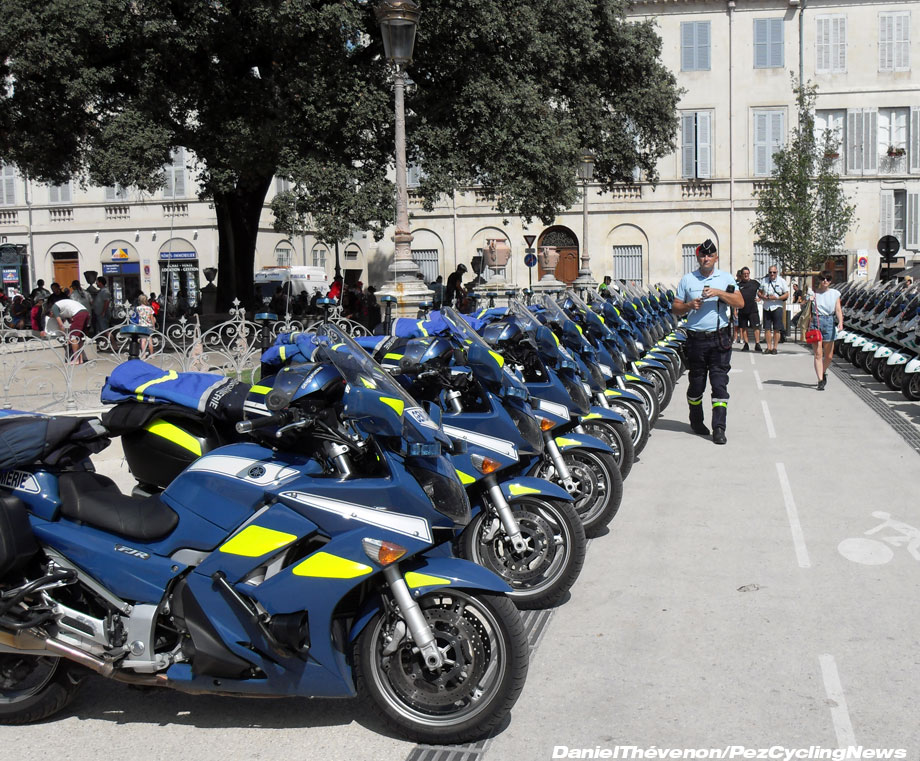 The motorbikes of Spain’s Guardia Civil are parked on one side of the Square Antonin and those of France’s gendarmerie on the other, evidence of the international character of this year’s Vuelta. 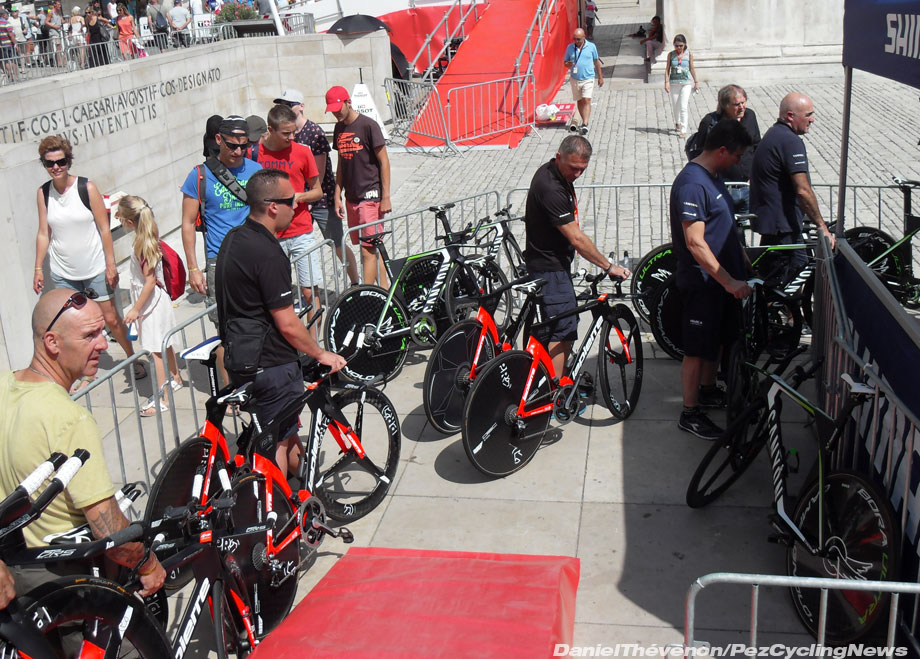 Mechanics line up to have their riders’ bikes examined by the race commissario. “He can be very fastidious, let’s hope he’s in a good mood”, one man in the queue whispers to another. 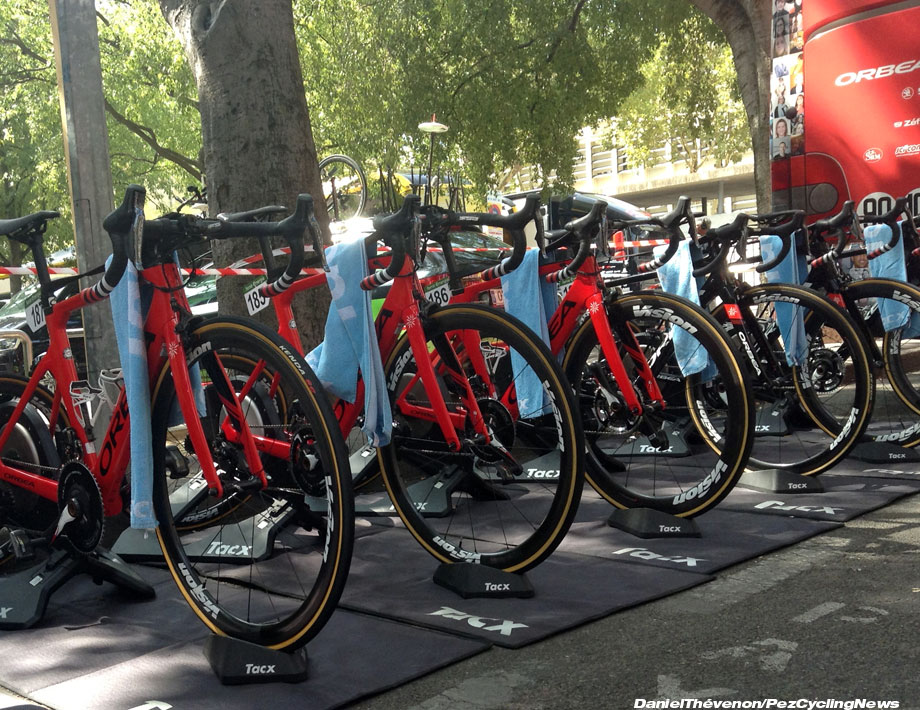 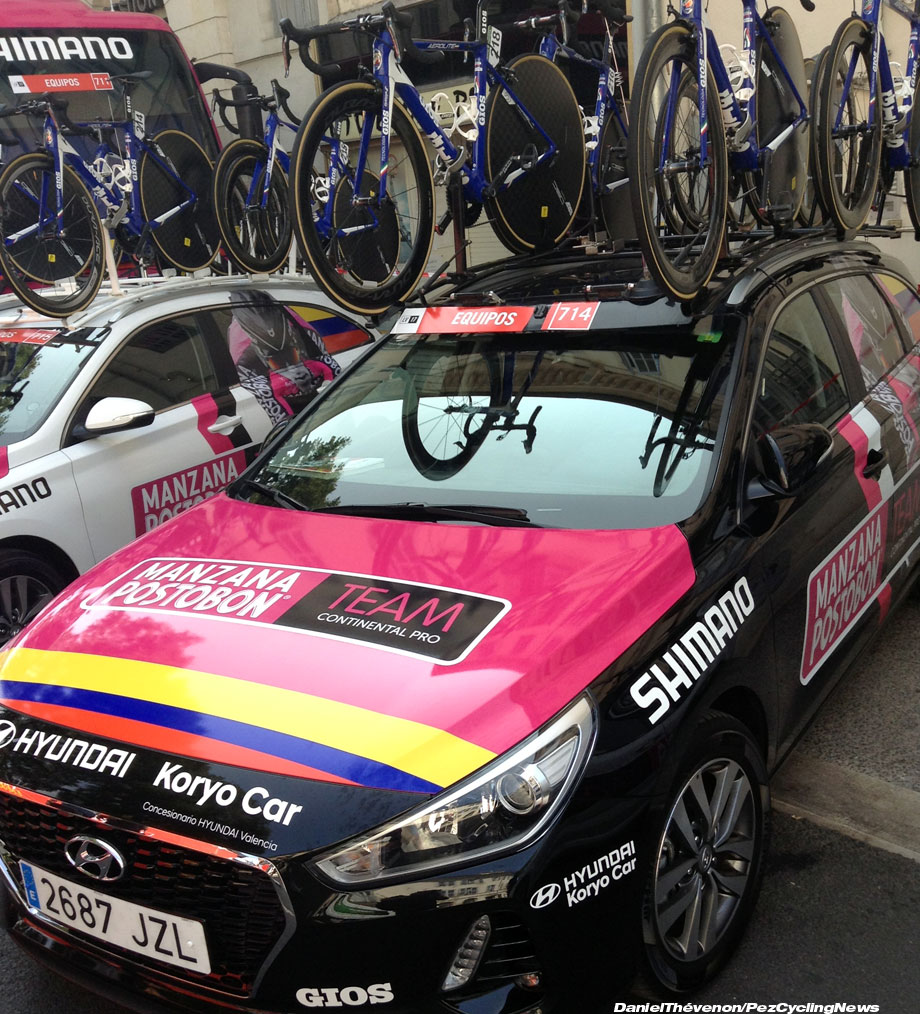 The Colombians of Manzana Postobon have received a wild card to participate in this year’s Tour of Spain and their fantastic fleet of pink vehicles is attracting all the attention. Their sponsor, a national soda company, is expecting a fizzingly good performance from them on the roads of the Vuelta. 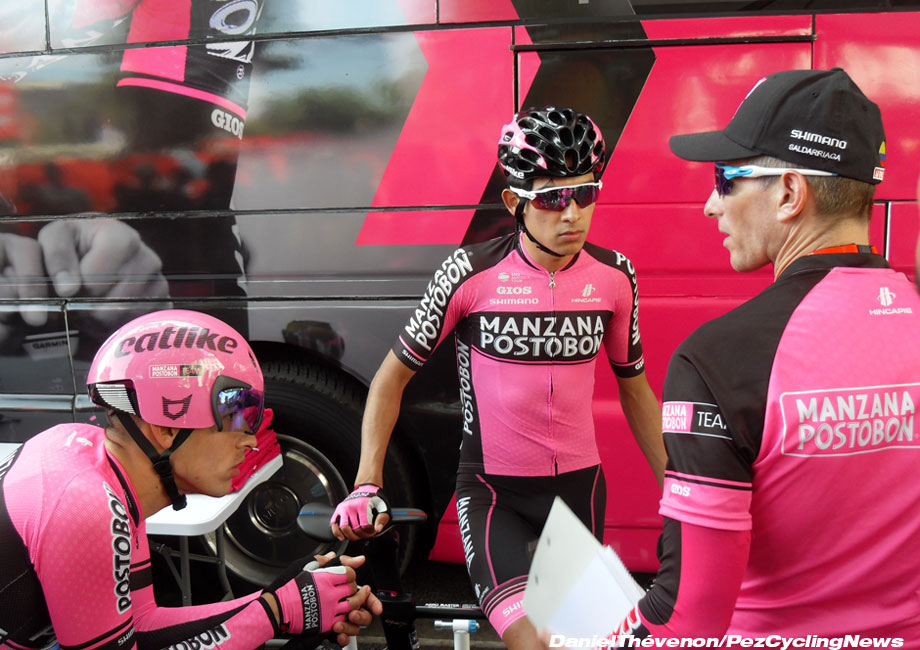 Luis Saldarriaga’s men lack experience but they will bring to the race their unadulterated enthusiasm and Latin American panache. 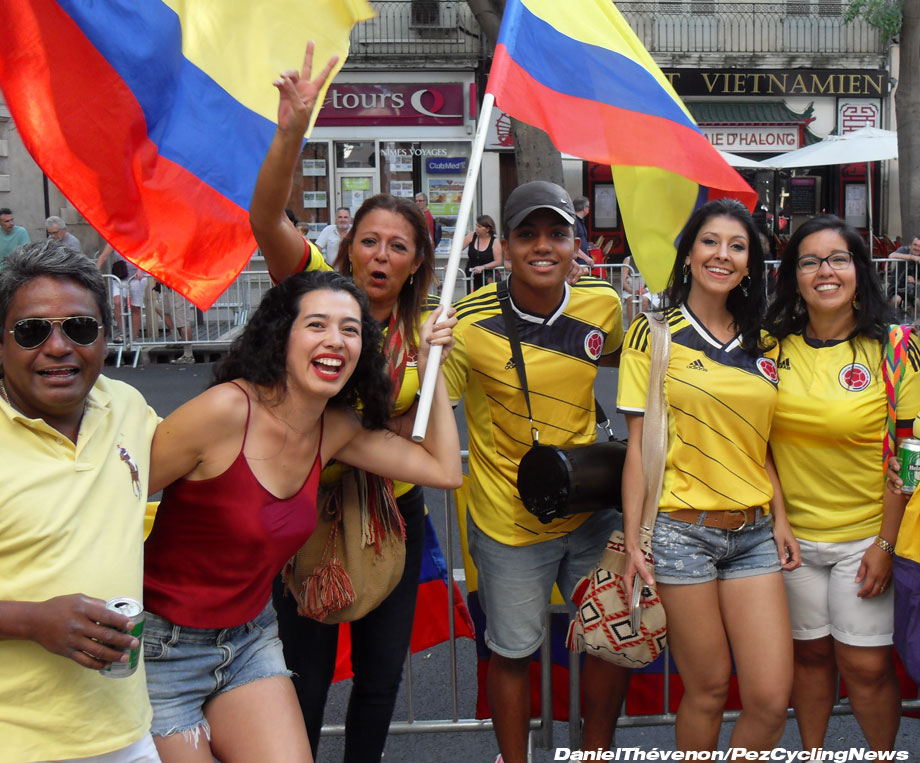 And, of course, the de rigueur busloads of fanatical supporters. 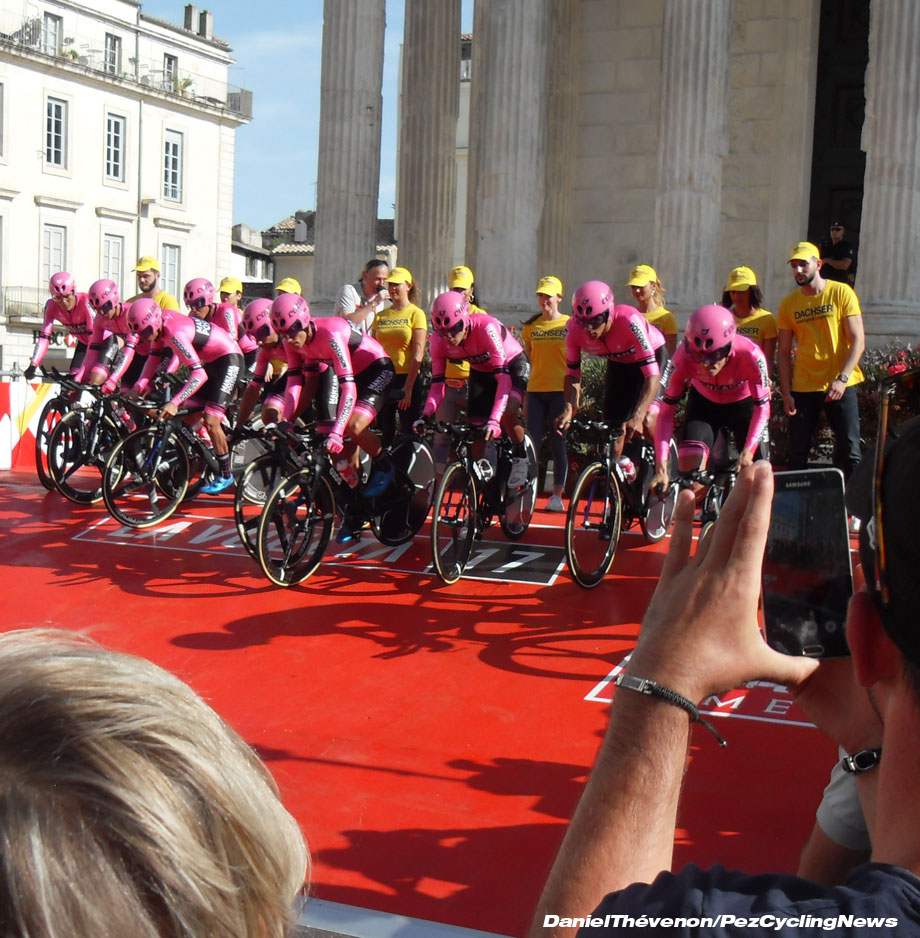 The men in pink are the first to depart, before a shimmering Roman temple. This looks and feels like the big time. 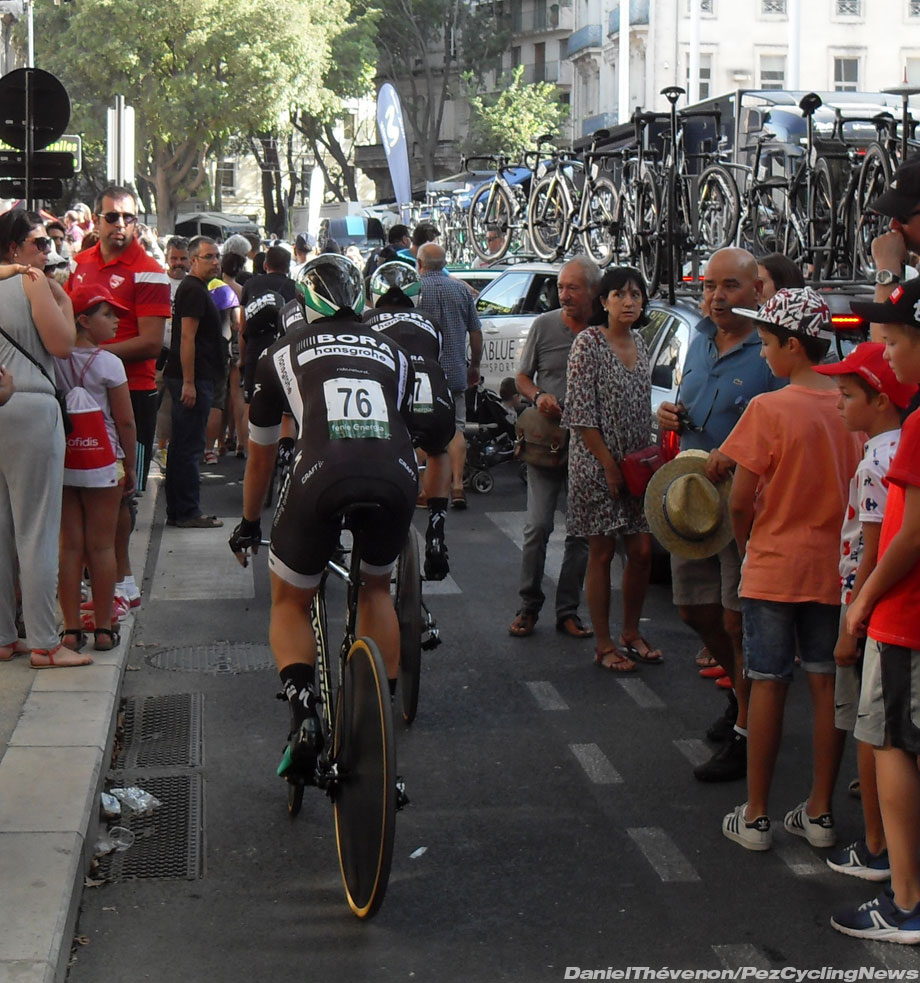 “Bitte, if you don’t mind clearing out of the way, I have a team time trial to compete in and I’m running late. Pretty please. I can get you some lovely cooktop extractors if that would help. The dernier cri in German food technology. Free of charge! Or how about some superb bathroom appliances? You’ll be showering like Sagan for the rest of your life! Think about it. Don’t get me wrong, I’m sure that your Saturday shopping is important but it’s just that me and my team-mates have to sweep through Nîmes at speeds exceeding 60 kilometers an hour in a few moments’ time and the clock is ticking. This is kind of a big deal for us. And it’s not like BMC are going to soft-pedal through the first part of the course to give us a fighting chance after having noticed that we were delayed by a crowd of revelers.” 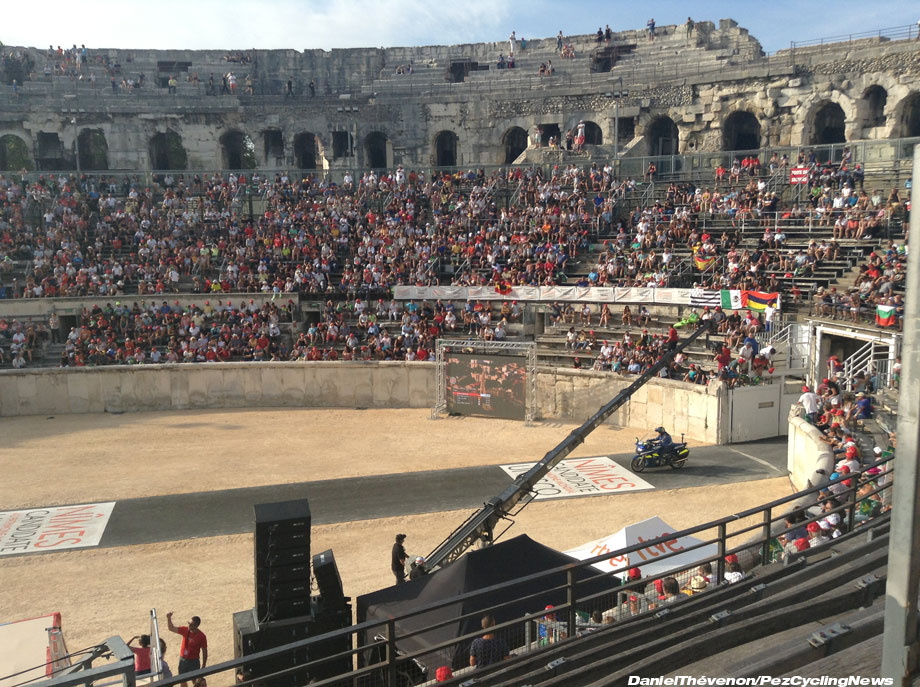 Inside the arena, an expectant crowd awaits. Today’s gladiators are on wheels, however, and will blitz past in the blink of an eye. “If the world’s finest ballet dancer entered the stage only to exit it seconds later after performing a hop, a spin and a croise devant, you would hear the audience cry blue murder”, the writer and cycling enthusiast Paul Fournel writes. “Yet, the public at cycling races feels thrilled if it has enjoyed the rare privilege of catching a fleeting sight of the back of its favorite rider’s neck.” 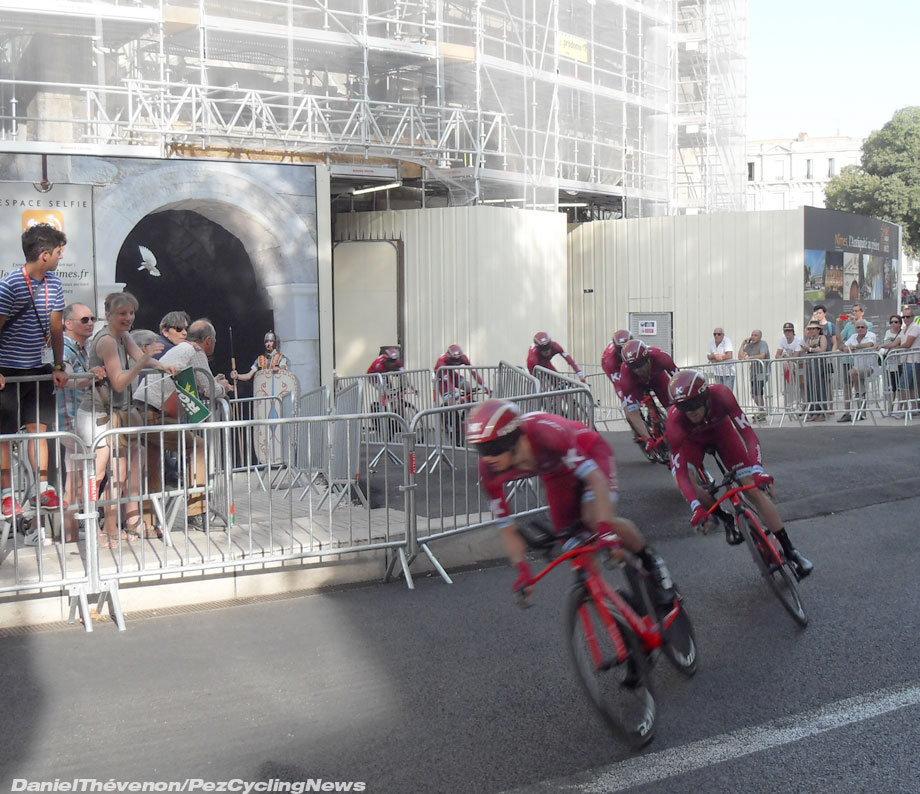 The Zakarin express zips past under a shower of applause, on its way to a tenth place finish. 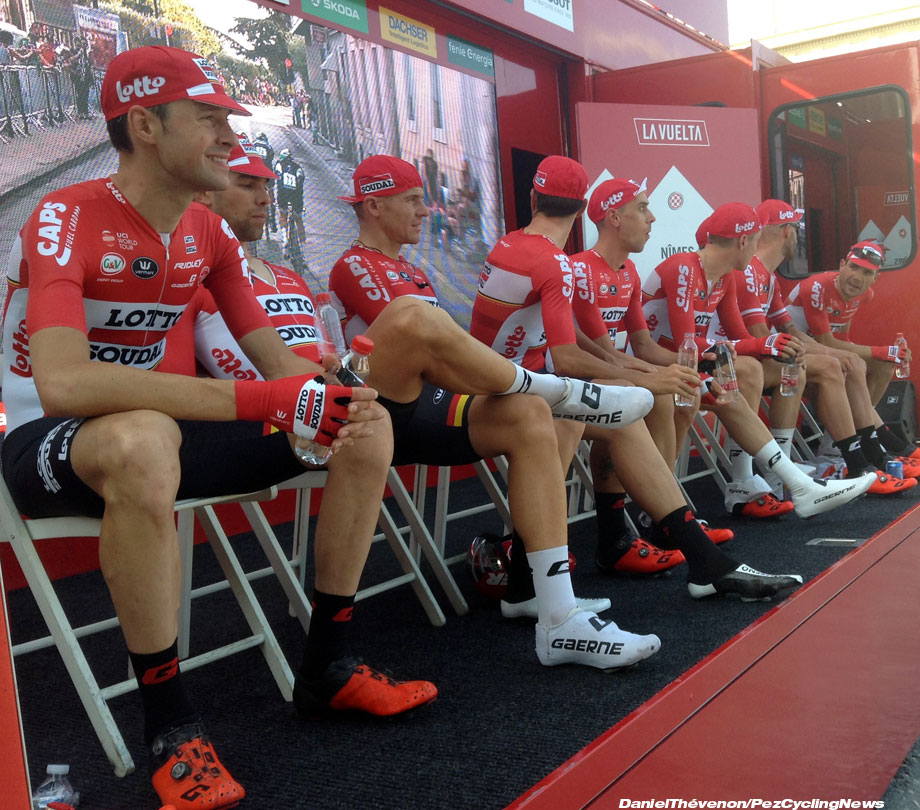 The Belgians of Lotto Soudal sit in the leaders’ chairs on a platform at the finish, looking satisfied with their performance. But the men barreling through the streets of Nîmes on the screen behind them, the Germans of Bora-Hansgrohe, are about to wipe the smile off their faces. 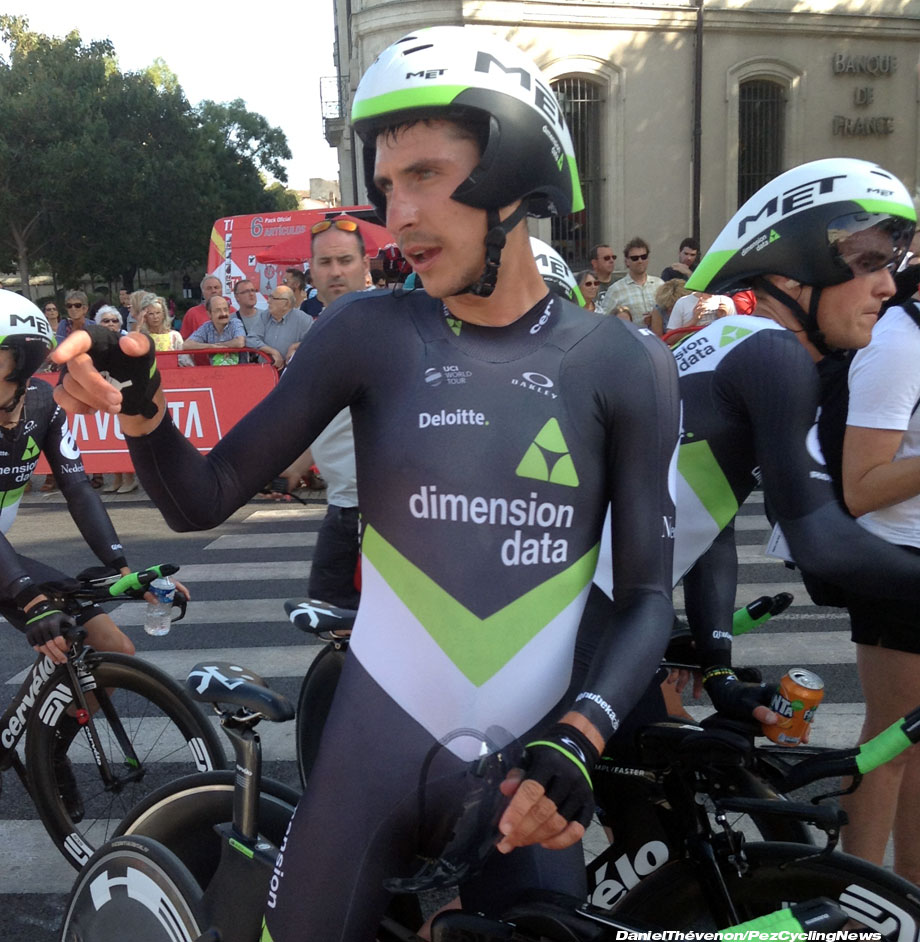 Australia’s Lachlan Morton tells his soigneur all about that time trial. How sober his black, white and green Dimension Data skinsuit looks compared to the outlandish sport bean-themed livery of Jelly Belly he wore last year when he won the Tour of Utah. Today, the performance was modest too, his South African stable recording only the 14th best time. 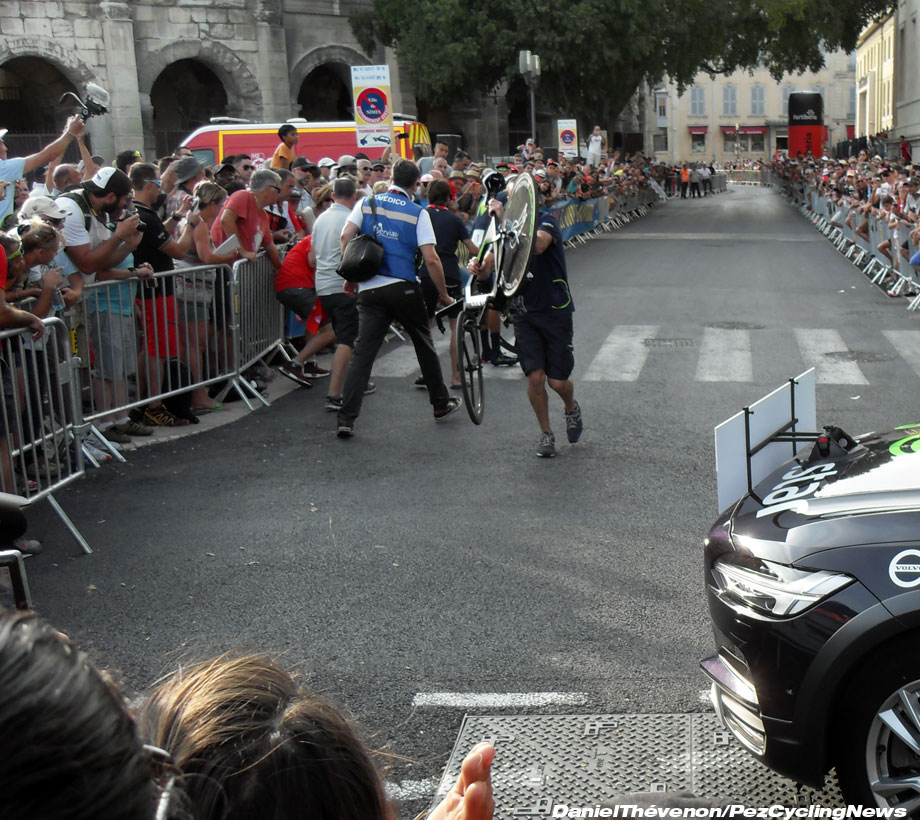 A crashing sound interrupts the festive hum rising from the streets of Nîmes. Movistar’s Jorge Arcas has misjudged a dangerous bend and collided with a barrier. 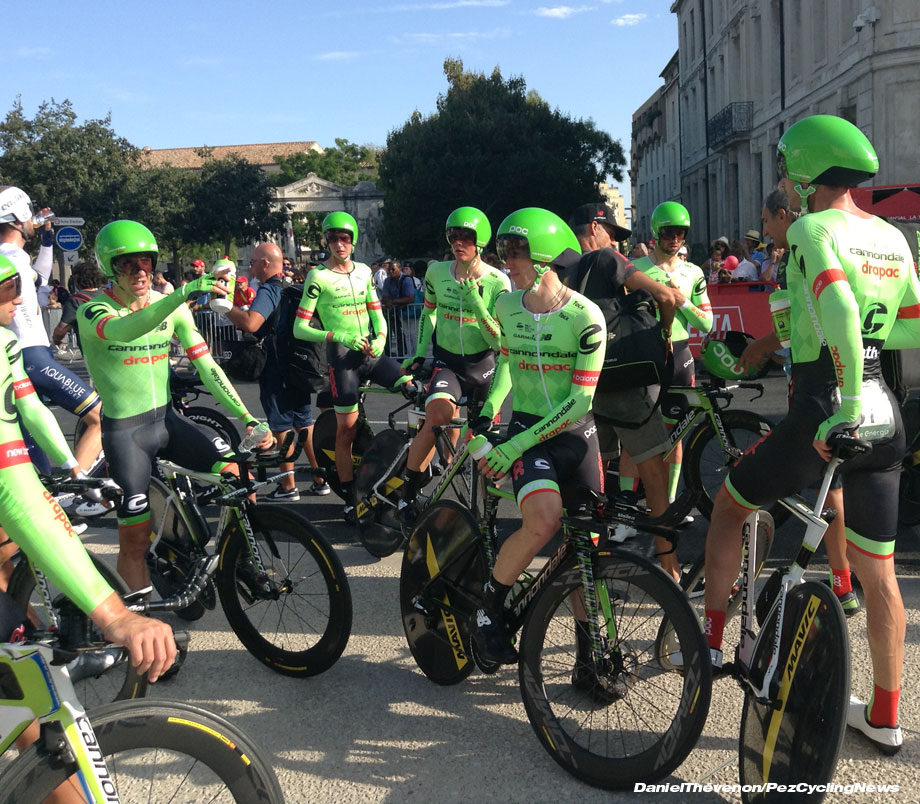 The riders of Cannondale gather at the finish for an off-the-cuff debrief. The general consensus is that if the men in lime green had ridden a little faster in today’s contrarreloj they might have ranked higher than seventeenth. 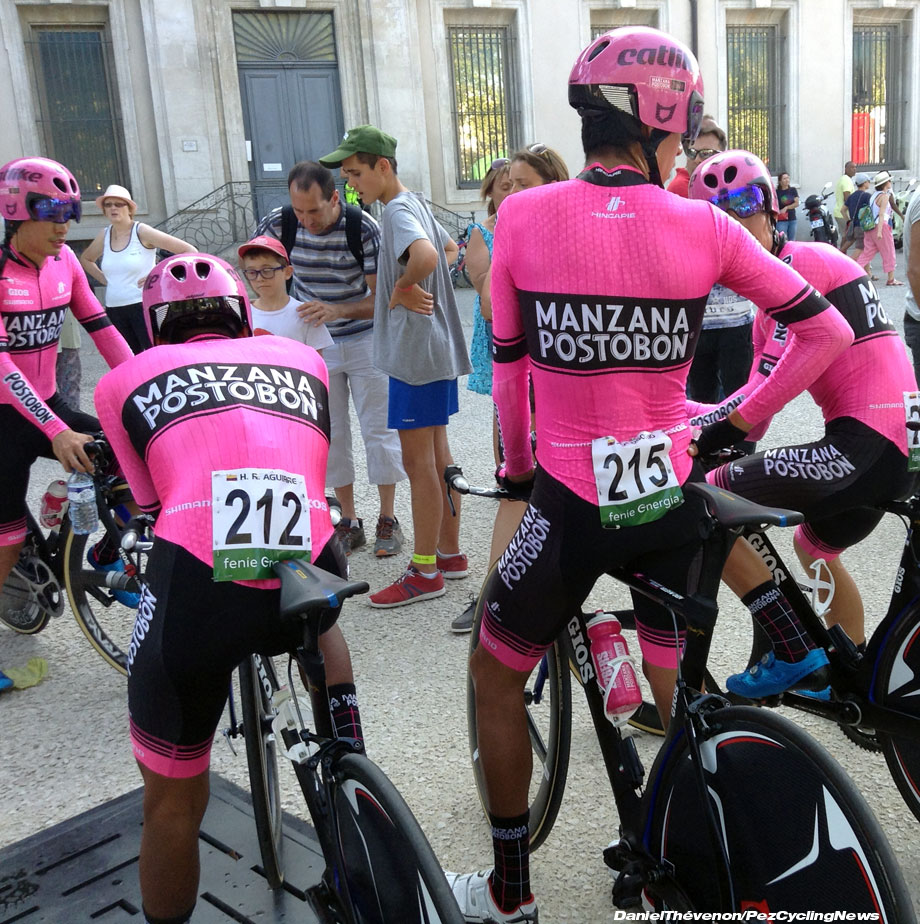 Hernando Ricardo Aguirre Caipa, Juan Felipe Osorio and their team-mates finished twentieth of the stage. Only Caja Rural and Cofidis fared worst, but at least the Colombians did not receive the proverbial wooden spoon many had promised them. The gaps today were trivial and the Vuelta is only beginning…

# Catch up with Daniel’s first report from Nîmes. #