Stage Report: The ultra-talented Matteo Trentin finished off a solid day’s work for the Quick-Step Floors team, with a brave day-long break closed down in the final ten kilometers. The lead-out might not have been Kittel-perfect, but Trentin was dropped off where he needed to be and the Italian won out over JJ Lobato (LottoNl-Jumbo) and Tom van Asbroek (Cannondale-Drapac). 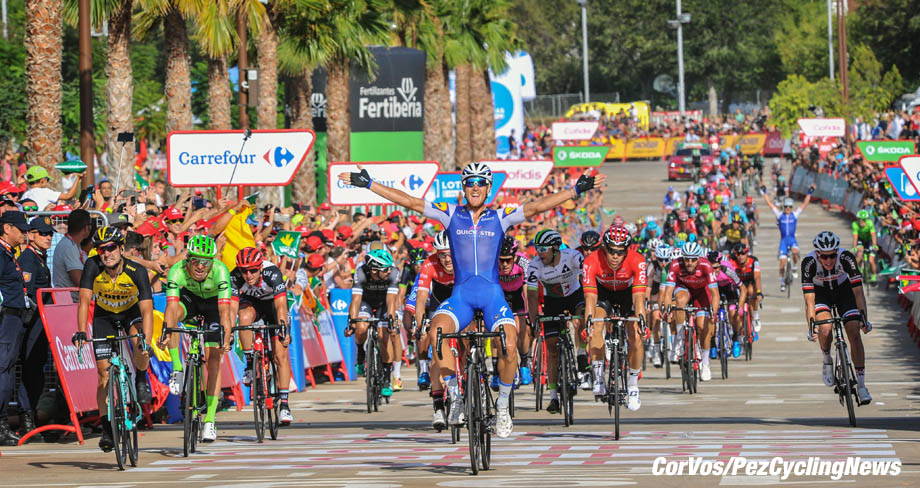 This was as close to a day off as Chris Froome and Team Sky could hope for. Their first day in the red leader’s jersey, and it was practically downhill all the way from Escaldes-Engordany to Tarragona by the Mediterranean Sea, with only a third-category pimple at Alto del Belltall at sixty-six kilometers to go offering any resistance. 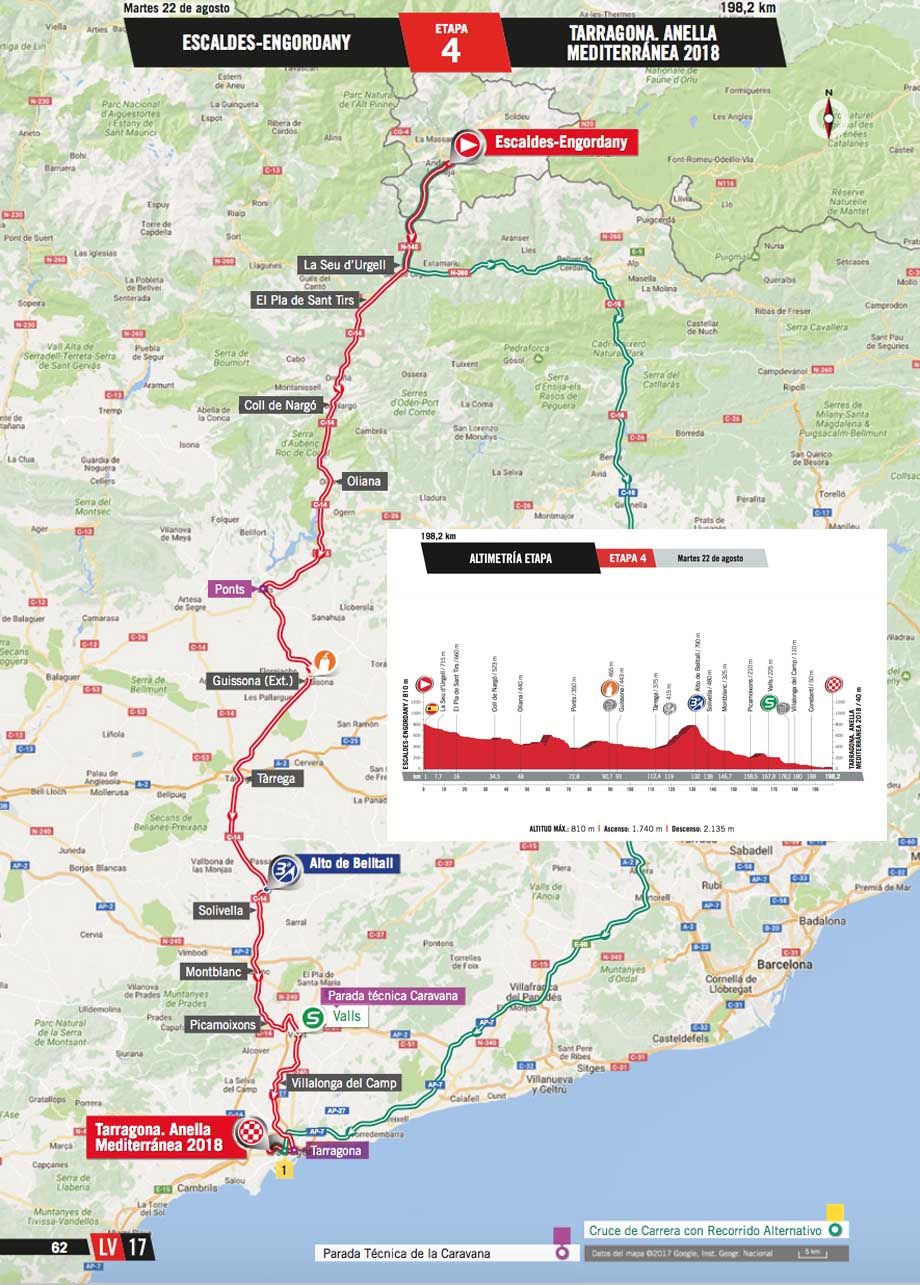 Once the break of the day had coalesced, Sky gave a fairly half-hearted chase, allowing the lead to wander beyond the boundaries of seven minutes. Sky knew that, eventually, those teams hoping for a sprint finish would have to get involved and make the effort themselves.

Quick-Step Floors came forward to offer Sky a hand… then UAE Emirates and Aqua Blue Sport ambled forward to get involved. Lotto Soudal invested a bit more speed hacking the escapees’ advantage, but it was all pretty calm until the breakaway imploded on the Alto del Belltall. Rossetto attacked, Rubio joined him, and the rest of the escape were toasted – it was just on four-and-a-half minutes to the main field as the leaders crested the summit. 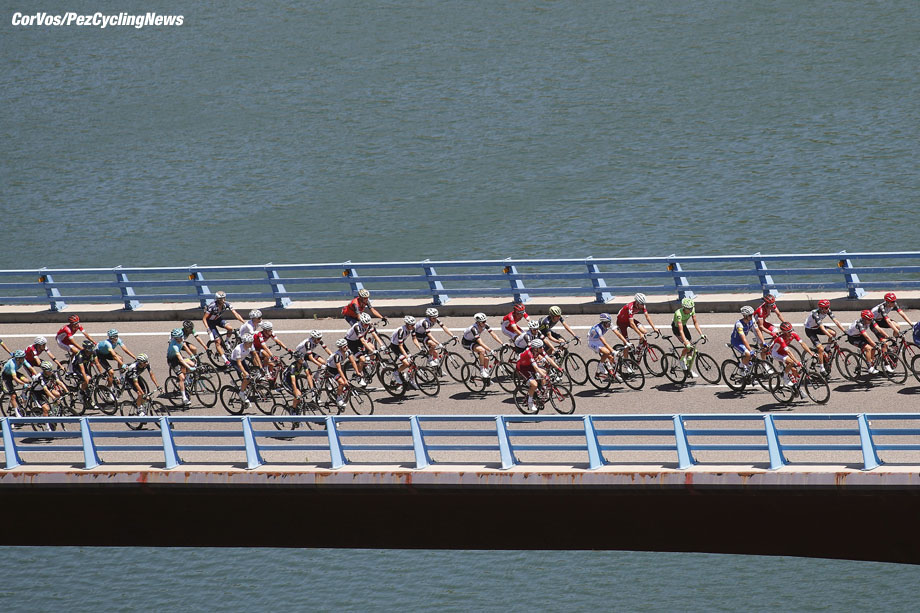 The peloton kept just gradually chipping away at the gap, and Rubio led Rossetto over the intermediate sprint point at Valls (31 kilometers to race) with two-and-a-half minutes in hand. Sky snaffled the final bonus second in a cannibalistic attempt to see off any challenge to Froome’s overall lead.

It was just 1:05 for Rossetto and Rubio with 16 kilometers left while, a further minute behind the peloton, Sunweb’s Wilco Kelderman was struggling after a big tumble, his jersey shredded. Every time one of the breakaway duo would take a turn, the other seemed to struggle and had a real job to hold the wheel. First Rossetto stretched away, and then Rubio tried to jump his partner. 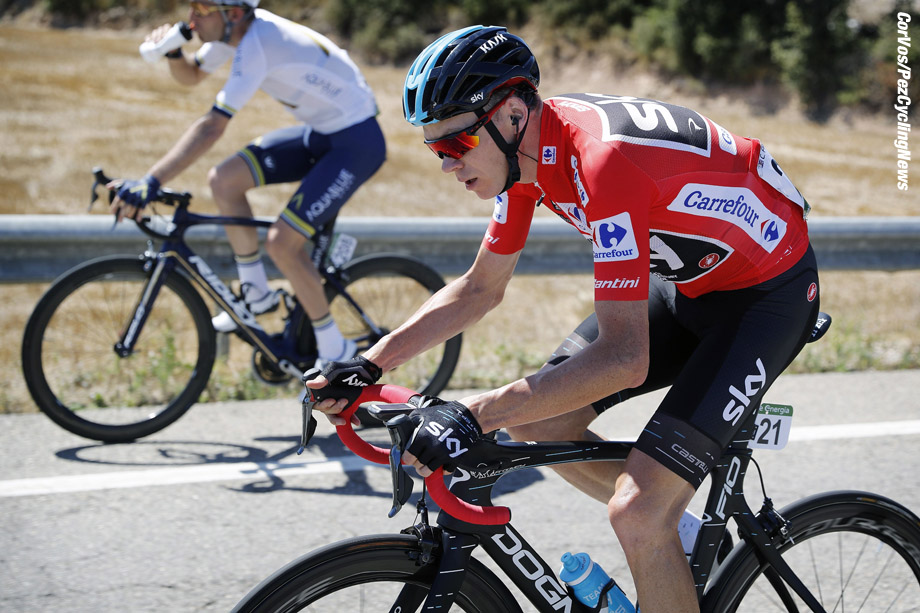 Another day in red for Chris Froome

11 kilometers left and the medical car was right on point when Mark Christian (Aqua Blue Sport) was hit in a tangle mid-peloton, the riders getting nervous as the finish loomed.

Quick-Step finally finished off the escape, hammering past Rossetto just inside 8 kilometers left. Manzana-Postobon had a go inside six to go, as Bora-Hansgrohe, Katusha-Alpecin, LottoNl-Jumbo and Aqua Blue Sport came forward for the anticipated sprint.

A crash just outside the three-kilometer point took down Movistar’s Dani Moreno and Domenico Pozzovivo (Ag2r-La Mondiale). Jelle Wallays (Lotto Soudal) also fell and seemed in a lot of pain, as Bora-Hansgrohe and Quick-Step continued to batter along on the front.

Under the red kite, skirting a huge roundabout and Cannondale-Drapac started to emerge at the front. Juanjo Lobato (LottoNl-Jumbo) led it out round the final corner, but Quick-Step’s Mateo Trentin came flying through on the left for a clear win. 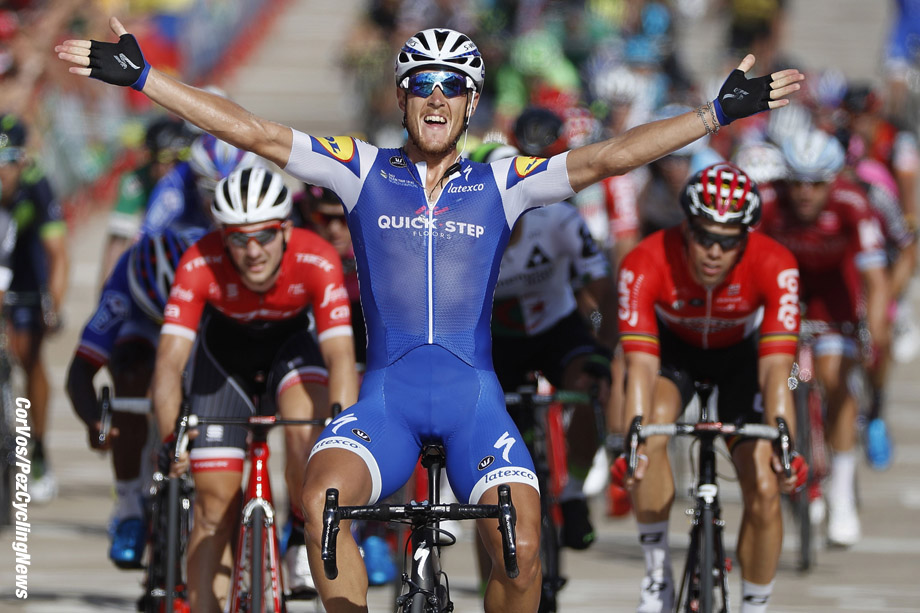 Trentin had the win in his pocket

Chris Froome and (most of) the main contenders got through the day unscathed, so Sky will have the red jersey again tomorrow. Chapeau to Trentin who now becomes (I think) the fourteenth active pro rider to have won stages in all three Grand Tours. Can you name them? 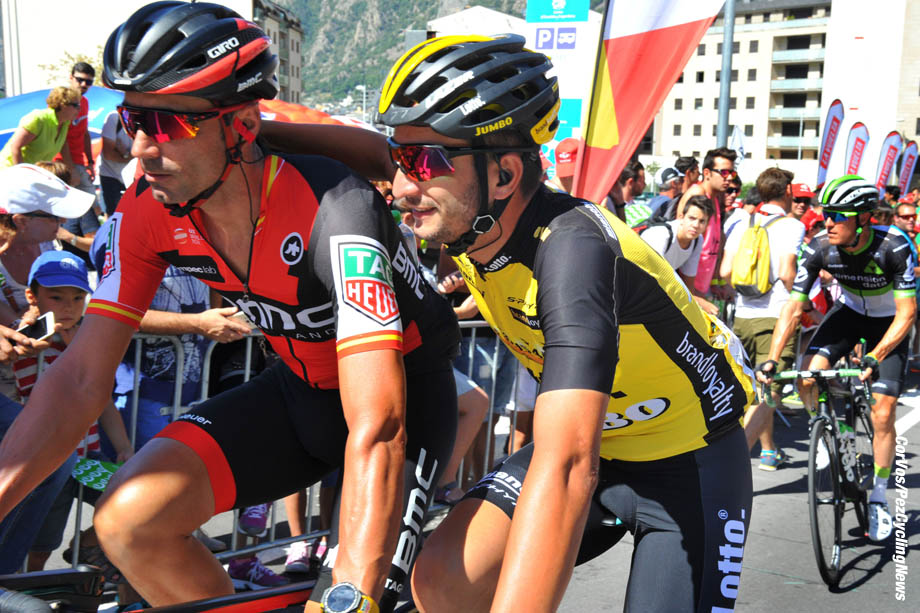 LottoNl-Jumbo’s JJ Lobato was very close to the win

Lots more to come from la Vuelta’17, so keep it Pez!

Back to Races with the Double Belgian Competition