It was a podium sweep for Holowesko-Citadel Racing in the 91-mile road race, with teammates Andrei Krasilnikau (Belarus) and Andzs Flaksis (Latvia) finishing second and third, respectively. With Clark’s seventh-place finish at the Sunny King Criterium, he earned a total of 40 points for the early lead in the men’s standings for the USA Cycling competition. 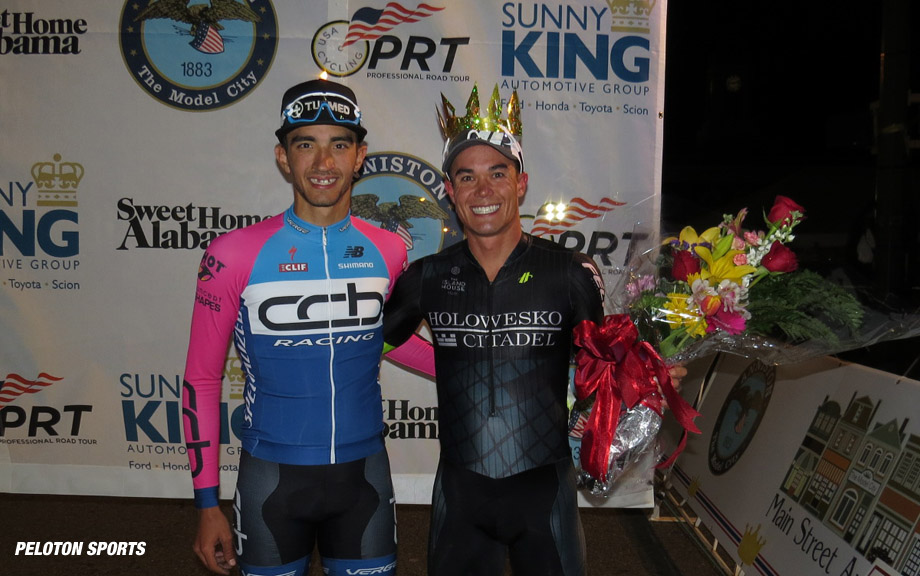 Both of the top teams started the weekend with wins in the Sunny King Criterium.

The Alabama Cycling Classic combines the well-established Sunny King Criterium with the McClellan Road Race for two full days of road racing, kicking off the PRT. It is the 14th year the City of Anniston has hosted the weekend of bicycle events, held in conjunction with the Noble Street Festival and supported by Sunny King Automotive. 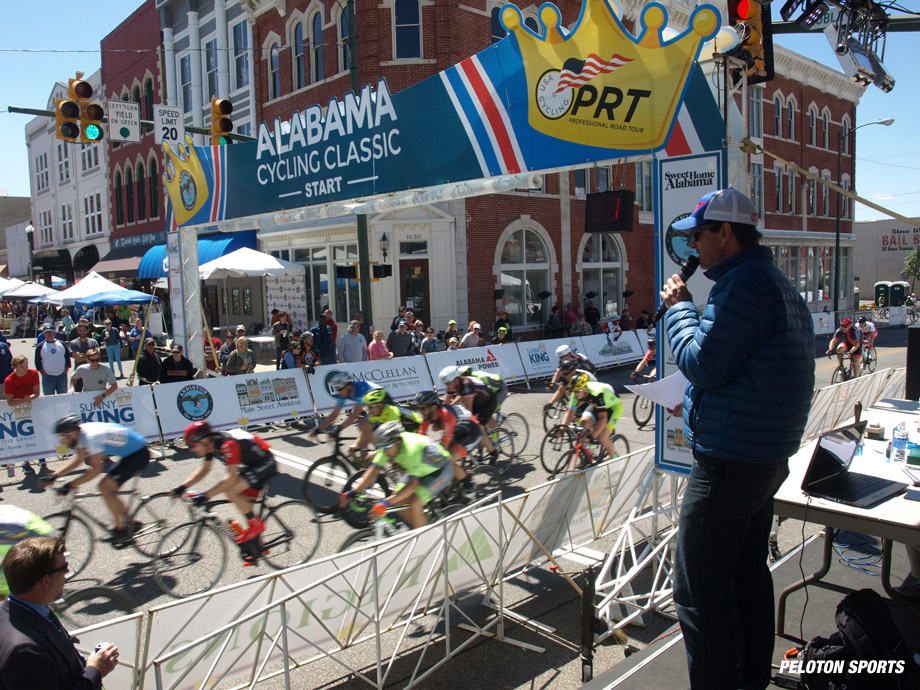 “It was such a successful weekend on so many levels this year. The race registrations went over 700, so we were able to generate $12,500 for the Calhoun County chapter of the American Cancer Society Relay for Life. Web streaming of the criterium and road race was viewed by close to 20,000 unique viewers from 108 countries. The Alabama Cycling Classic proves it is more than bicycle races in Anniston,” said race director Marilyn Cullinane. “We greatly appreciate the support of all our sponsors, as well as the public safety support from the City of Anniston and Calhoun County.”

Saturday offered 21 categorized races for a variety of age groups and skill levels, capped under the lights with the signature professional races for pro women and pro men.

“I’ve been here quite a few times and I am really happy with this result,” Samantha Schneider said after the win, improving on her sixth place finish last year. Skylar, who is 17 years old and eight years younger than her sister, finished fourth in 2015. “I had a very strong team. The average age is 19, so we are a very young squad, so happy to win here and take the win in Anniston. We had a few different game plans depending on how the race played out. I am honestly sprinting pretty well, so that was in the back of our minds and it played out for that.”

A solid breakaway was formed by three riders for almost half the race – Flaksis of Holowesko-Citadel Racing presented by Hincapie Sportswear, Brendan McCormack (Leicester, Mass.) of CBC Racing and Ryan Knapp (Columbus, Ind.) of First Internet Bank Cycling. A talented UnitedHealthcare Pro Cycling Team, led by defending Sunny King champion Ty Magner (Athens, Ga.), worked at the front of the race all night to the delight of huge crowds around the one-kilometer course. They managed to catch the breakaway, but Magner had to settle for fifth.

“It feels so good. I mean, we as a team, just raced an ideal race for everyone. Andzs was off the front and took all the pressure off of us. I honestly thought he was going to stay away, and really forced UnitedHealthcare to take charge and they paid for it really. It put us in perfect position,” said McCabe, who is new to the Holowesko l Citadel team this year. “I came out third wheel into the last corner and smoked them in the sprint. So it feels good.”

Both McCabe and Hernandez had teammates in the breakaway, who would return and finish in the Top 10 at Sunday’s McClellan Road Race – Flaksis finishing third and McCormack finishing seventh.

“This is our first real sprint together as a team, so it was a really cool experience. It was a hard finish. I knew that the whole time he (McCormack) was up there (in the break). I just had to position myself at the front in case he got caught. I was ready to sprint, so it worked out really well,” added Hernandez about his podium finish against a top-rated field.

On Sunday, the second-year McClellan Road Race events challenged the professionals to 22-mile circuits, that included multiple climbs of Bains Gap, which challenges riders with an average gradient of 17 percent for more than half a mile. The men’s field included102 riders and the women’s field included 36 riders, all vying to split a $24,000 prize purse.

Women’s champion, Prinner of Rally Cycling, finished the 69-mile course in 3 hours 26 minutes and 5 seconds. “It came down to the last climb and I became an opportunistic rider. I had to give it everything I had and there is no drafting up that climb. It’s just as hard as you can go.

“It’s the first win for the Rally Women’s team, so we’re pretty excited and I feel like the three of us worked together really well and we maximized our abilities the best we could and it’s a team win for sure.” 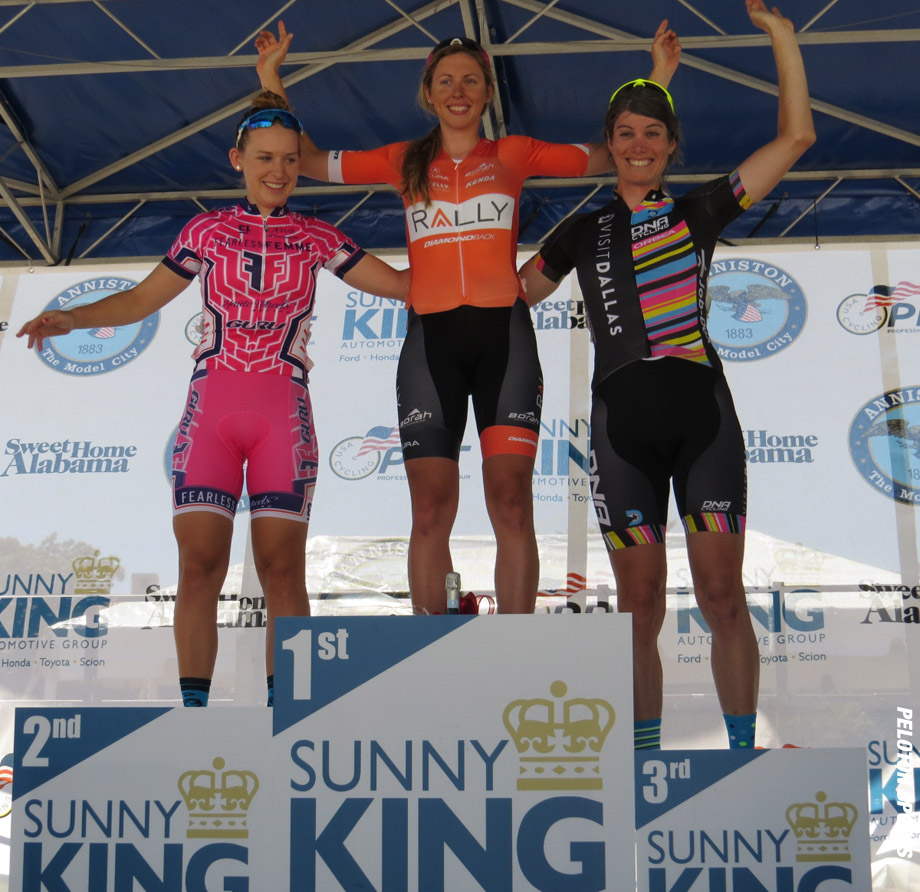 The race was ideally suited for climbers, with a 1.6-mile section of the course along Anniston Eastern Bypass designated for Queen of the Mountain points. The racers made four trips up each climb and finished at the top of Baines Gap. Janelle Cole (Rockford, Mich.) of TWENTY16 Ridebiker captured the QOM Classification title, and finished fourth overall in the road race.

“This was my first time to do the race and it was a unique one because the extremely hard feature of the course is the Bains Gap climb. It changed the entire dynamics of the race,” said Cole. “I am not a climber. I’ve really been doing a lot of work back in Brevard (N.C.), on the ‘home turf’, with a lot of climbing, so it paid off.”

With most racers doing the Sunny King Criterium on Saturday night followed by the road race on Sunday, there was little opportunity to rest and recover. Samantha Schneider finished fifth in road race, which was key in securing her PRT lead. Gilgen, who was third in the road race, finished fourth in the criterium.

“I’m coming straight off my training blocks in Tucson, I go there for a few months in the winter. I’ve spent a lot of time this winter working on my climbing. So for me this race was a real test to see how, in a real life situation of a race, how that training was going to translate into actual speed on a climb,” the Canadian said. “I was pretty motivated to go fast on the climb (Bains Gap). It was murder every single time going up Bains Gap, but I kept the pedals turning over. It really did come down to an attack my teammate made, and then I countered it at a good time, and no one chased.” 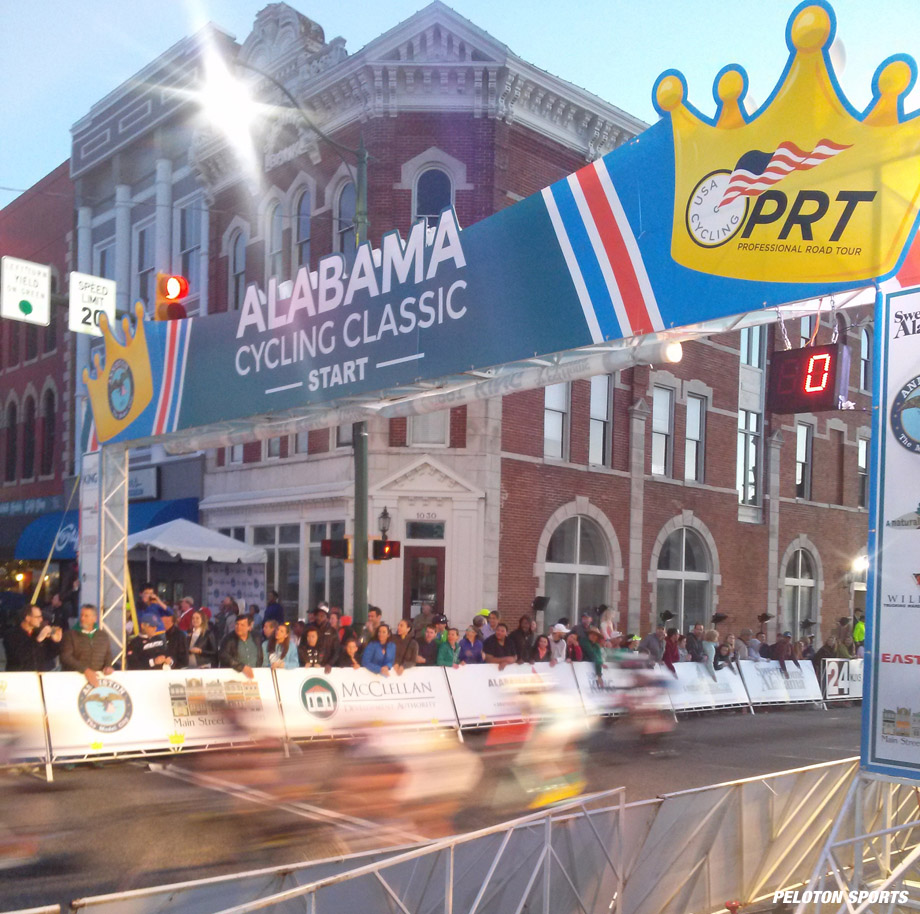 “We stayed together for a lap and a half and then it was a perfect opportunity to ride off the front with my teammate Andrei Krasilnikau. He’s a Belarusian national champion. I know it was pretty far out, but we managed to hold them off until the end,” said Clark about the tactics to break away early in the road race. “The course is definitely great. Great roads, and challenging. It was a hard course.”

“The course is very hard, and very good. Today the climb (Bains Gap) was a little bit easier for me because we were at the front, and we could keep a steady pace. Technically we did well, and the whole team was perfect,” added Krasilnikau.

The top-rated PRT team captured five of the top six spots on Sunday, with McCabe in fifth and Brendan Rhim (Greenville, S.C.) in sixth. Between all the black jerseys was Thomas Revard (Carmel, Ind.) of Bissell-ABG-Giant. He finished 11th in the Category 2 race at the Sunny King Criterium and was able to move to Category 1 on Saturday night for his first pro road race.

A portion of proceeds from all bicycle race registration fees are donated to the American Cancer Society Relay for Life chapter of Calhoun County. With the $12,500 generated this year, more than $100,000 has been raised for cancer research and patient support. 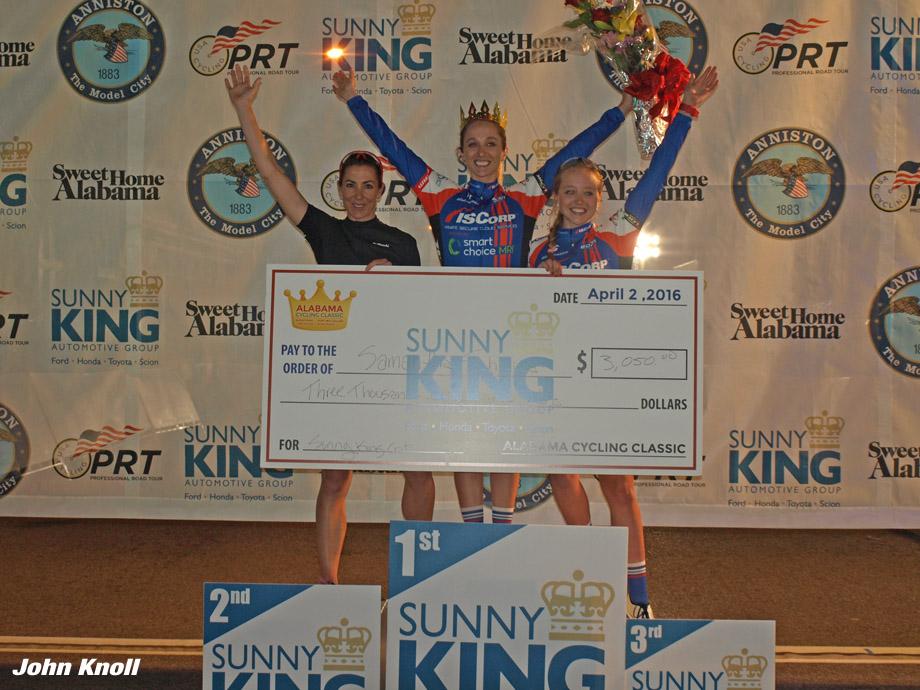 About Alabama Cycling Classic
The Sunny King Criterium began in 2002 as Anniston’s signature cycling event for professional and amateur male and female cyclists from around the globe. The start/finish line for the race is located at 11th and Noble streets in downtown Anniston, with 20 categorized races for adults and juniors. Two categorized road races for professional men and women will be held the following day for the McClellan Road Race. This event features more than 7,000 feet of climbing, with the finish on Bains Gap. It is the first stop on the USA Cycling Professional Road Tour. Admission is free for spectators. All races are managed by Start Smart Cycling.

About Noble Street Festival
The annual Noble Street Festival comes alive with family-friendly activities to support the Sunny King Criterium. The festival is managed by Main Street Anniston. Activities include “Taste on Noble”, Scion KidZone, YMCA Kidz Bike Races (children pre-K to grade 6), Mellow Mushroom Mad Dash and live music throughout the day. Food and beverage tickets for “Taste on Noble” are made available for purchase that Saturday from designated BB&T tents throughout the festival.

About Sunny King
Located in Anniston, Alabama, King Motor Co. has been in business since 1922. Toyota joined the King Motor Co. in 1989, becoming Sunny King Toyota. A longtime supporter of the Sunny King Criterium and the Noble Street Festival, Sunny King Toyota is a 19-time President’s Award Winner, an honor bestowed upon less than 25% of Toyota dealers across the nation. Learn more: www.sunnyking.com.

About Start Smart Cycling
Start Smart Cycling, LLC (SSC) provides professional management and consultation for all areas of cycling and community-based events. SSC is able to assist in pre-production, onsite event management and post event follow-up. Follow on the web (startsmartcycling.com), on Facebook (StartSmartCycling), and on Twitter (Start_SmartBike).

I Am Specialized: Tom Boonen