Race Report: Let’s Go Motorhomes Women’s Stage 3: Australia’s Grace Brown became the historic first Santos Tour Down Under UCI WorldTour champion after taking out the stage win at Campbelltown on Tuesday. The FDJ-SUEZ reigning national time trial champion beat three-time Tour Down Under champion Amanda Spratt in a sprint finish after an intriguing race which really got started at the bottom of the Corkscrew Road climb. 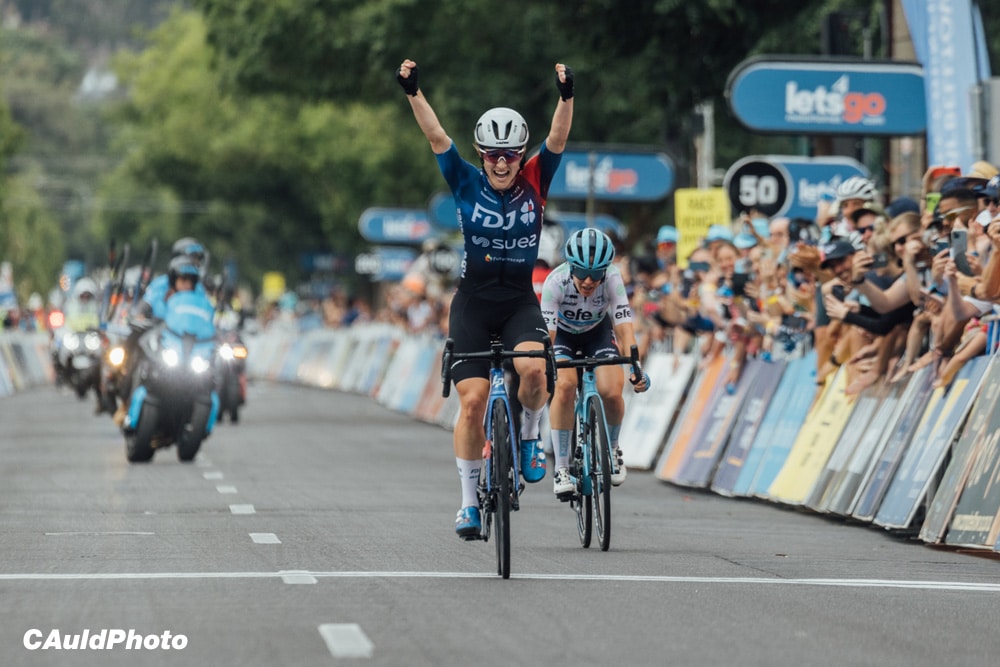 The Let’s Go Stage 3 Adelaide to Campbelltown stage looked like it was on its way to Spratt after her brave fight until Brown powered down Montacute Road to take out GC. “I’m elated,” Brown said before the was surrounded by FDJ-SUEZ team officials in a show of solidarity. “It feels so good, I knew the climb would be a challenge because Amanda (Spratt) is a bit more of a climber, I just needed to keep her within reach. I planned before the stage to put some bigger gears on my bike, so I could keep pushing on the descent. I was able to for the last 3kms, I could see her (Spratt) and then I thought if I could catch her and then, I decided to sit behind her in the last kilometre and I was fairly confident I could jump her in the sprint.”

Brown finished 10 seconds ahead of Trek-Segafredo’s Spratt in the GC, her second major prize of the new year after she was crowned as the Australian national time trial champion earlier this month after finished runner up in the road race. 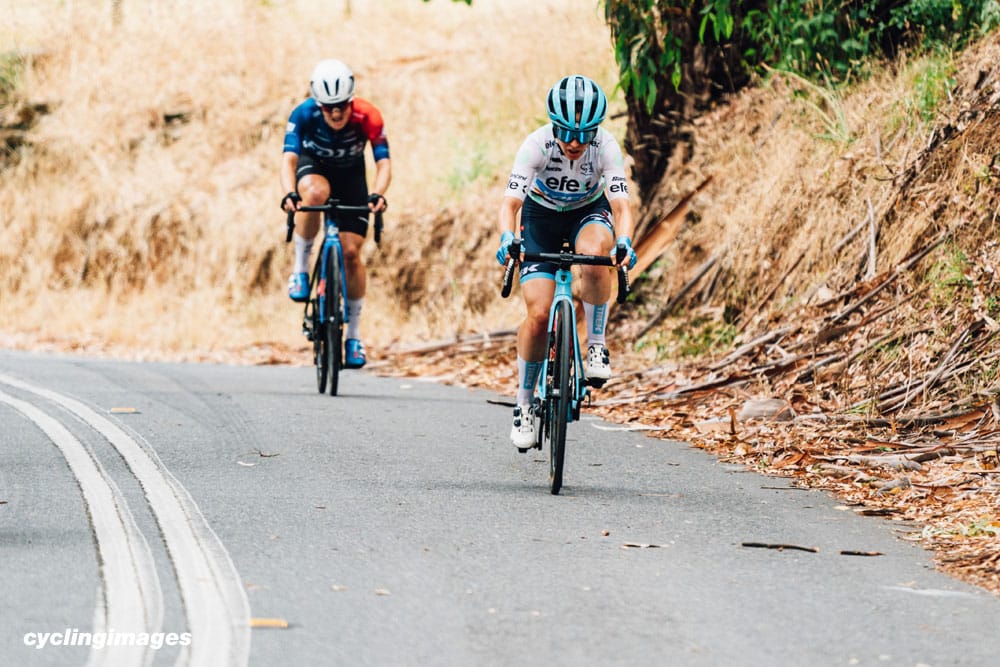 Brown also claimed the Ziptrak points classification, two points ahead of Spratt and Georgia Williams from EF Education TBCO SVB who finished third in the stage. Spratt – a three-time Tour Down Under champion before it was awarded WorldTour status this year – was crowned the efex Queen of the Mountain after reaching the Corkscrew summit in typical fashion first before Brown’s team plan worked a treat.

The race was very controlled from the off as sprinters Georgia Danford from team Coop-Hitec Products and Gina Ricardo from Bridgelane were in the early break. The pair opened up a gap of 1min 32 second which didn’t worry the race leaders 69km from the Montacute Road, Campbelltown finish line. 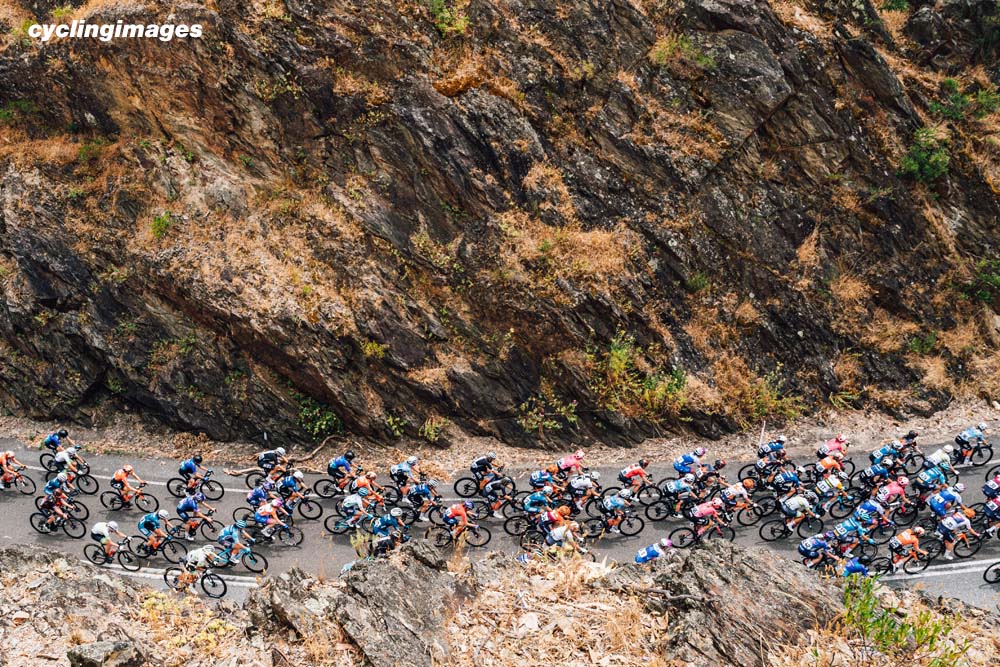 As the first Ziptrak preme sprint was approaching the peloton made its move just outside Pioneer Avenue, Lobethal but Ricardo claimed the time first time bonus followed by Danford. Daria Pikulik from Human Powered Health – the winner of Ziptrak stage 1 Glenelg to Aldinga – picked up the final time bonus beating the ochre jersey leader Alex Manly from Jayco AlUla at bay before the peloton again settled.

With 54km before the finish Lucinda Stewart, 18, from ARA Skip Capital Sunshine joined race leaders Danford and Ricardo to open a two-minute plus gap to the main peloton. The GC leaders’ teams didn’t appear too concerned to chase at that stage of the race as the tempo of the peloton slowed long before the Corkscrew Road climb.

Stewart claimed the second Ziptrak sprint at Torrens Valley Gumeracha with Ricardo and Danford second and third respectively as Manly and Spratt settled into their saddles for the battle of the Corkscrew Road. Stewart crashed after sliding on loose gravel as she was negotiating a right had turn onto Gorge Road but within seconds she was back on the bike before the peloton made it safely around the same corner. 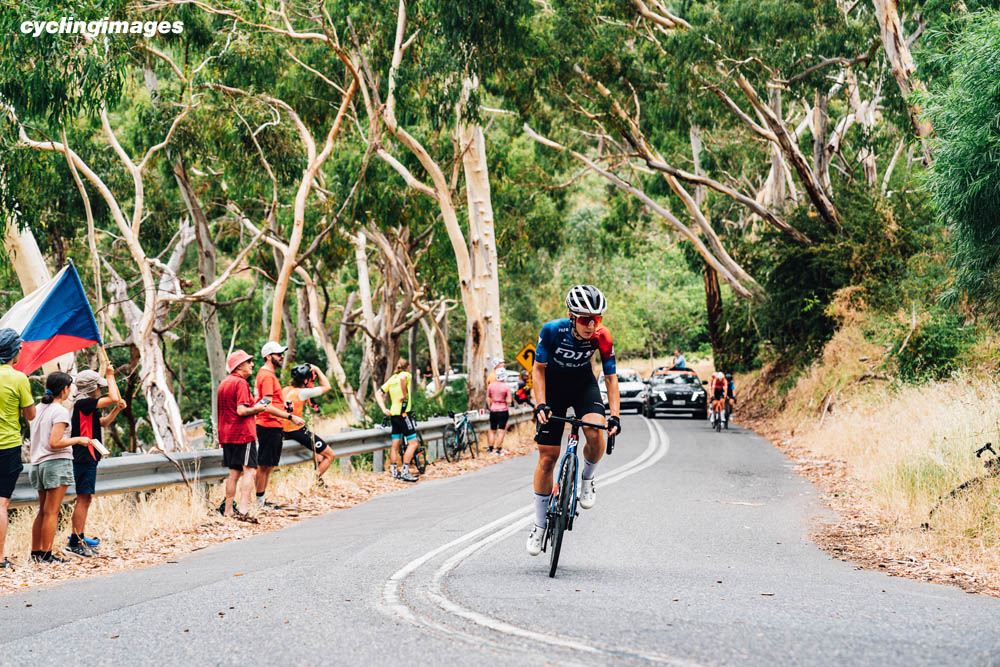 The showdown for GC was underway at the main peloton with Jayco UlULa, Trek-Segafredo and FDJ-SUEZ preparing for the business end of the race as they flew down Gorge Road. The breakaway came down to 1 min 21 sec before Brodie Chapman from Trek-Segafredo – the reigning national road champion – put it all on the line to pull Spratt to the top of the Corkscrew Road summit.

Manly, was hanging on as the three-time Tour Down Under champion looked to be comfortable before the switchbacks on the Corkscrew. Ruby Roseman-Gannon from Jayco-AlUla was also applying pressure as Manly dropped to the rear of the main peloton. Chapman was dropped as Spratt attacked at the front on Corkscrew Road and claimed the efex Queen of the Mountain before the super-fast descent. 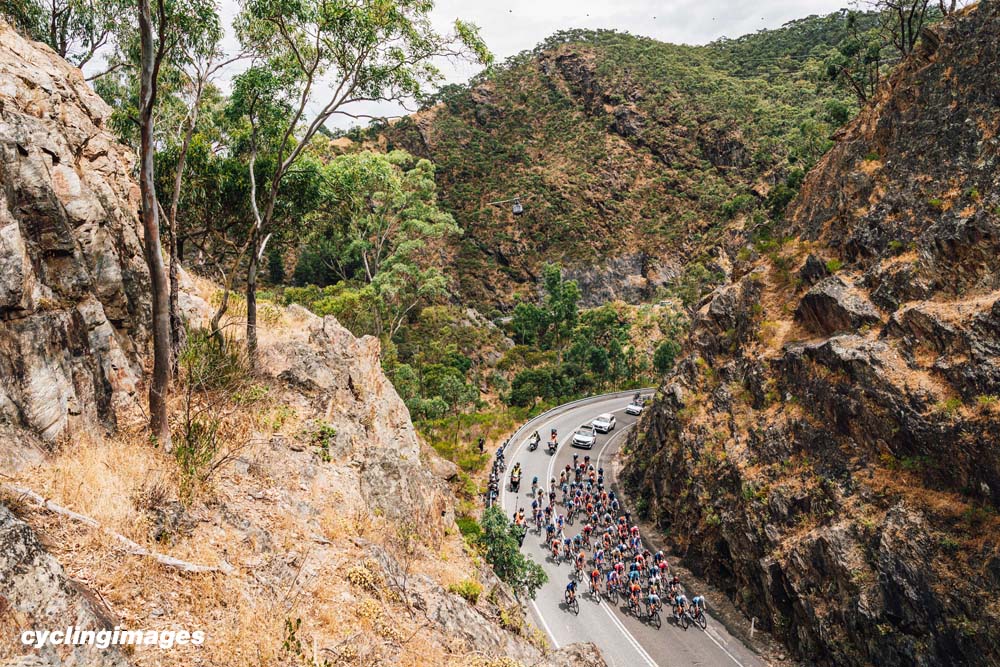 [GENERAL CLASSIFICATIONS WINNER, SANTOS TOUR DOWN UNDER] Grace BROWN, FDJ-Suez:
Wow, unbelievable. How do you feel right now? First UCI WorldTour Santos Tour Down Under Winner! You looked really good up that Corkscrew Climb.
I knew that the climb would be a challenge because I knew that [Amanda SPRATT] would have enough to handle me on the climb and I just needed to keep her within reach. I actually planned before the stage to put some bigger gears on my bike so that I could keep pushing on the descent and I was able too. In the last 3 kilometres I could see her and then I thought, I think I can catch her. I decided to sit behind her in the last kilometre because I was fairly confident that I could jump her in the sprint.

And you did. Your team was brilliant as well…
So good! The whole three stages really. They looked after me, they helped me go through the intermediate sprints, which are crucial in the end for the overall lead. Today, [They gave me] an awesome lead out into the final climb. Usually, I get a bit stressed with those things, but I felt really calm with my team in front of me so that was great.

You’ve had an absolute ball here in Adelaide. I mean you’ve made history. You’re number one in the UCI Women’s WorldTour, and you’ve done it here in Australia.
I don’t really have words for it. It’s really special. I never really thought that I would ever become a GC rider. But races like this really suit me and I have a team that believes in me. They tell me that I can do it and I believe them. I think we’re now going to watch the Men’s Prologue and have some cocktails.

[2ND OVERALL SANTOS TOUR DOWN UNDER, EFEX MOUNTAINS CLASIFICATION WINNER] Amanda SPRATT, Trek Segafredo:
That was a great race their Amanda, you came so close to wrapping it up.
Yes, I think they keep making these finish lines about one kilometre further than I want. That’s how it is but my team rode perfectly, we had a plan. I knew where I wanted to go on the Corkscrew and I think today my team set me up so well once again. I attacked where I wanted to and I knew I needed a good gap on Grace BROWN and it’s never nice when you hear the race bikes chasing you. I know her strength would be that downhill and that flat to the finish. I gave everything I had. I didn’t finish with anything left. I have no regrets. I’m so pleased and thankful to my team for supporting me here. 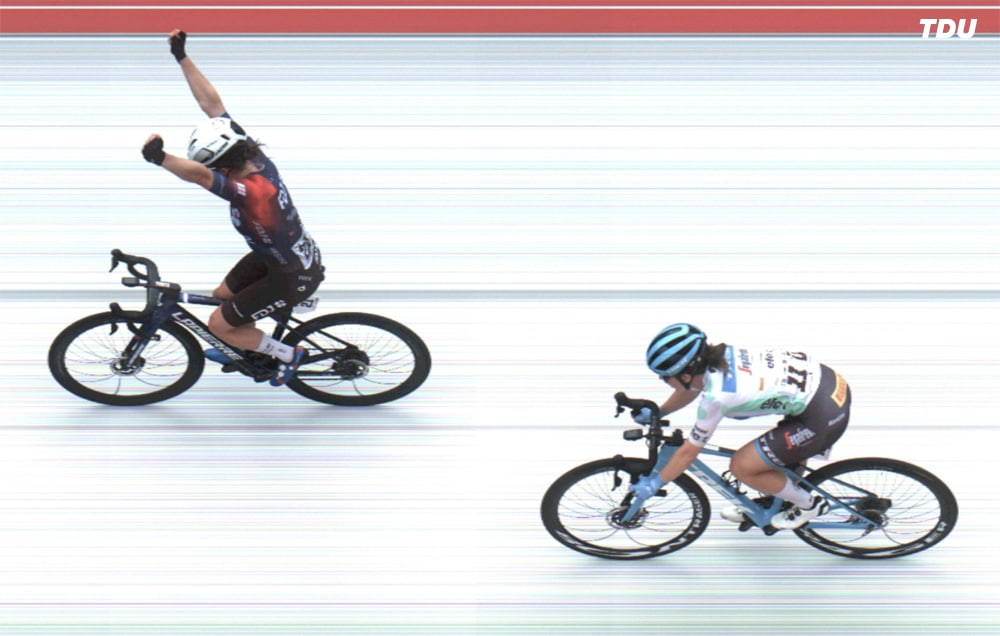 Men’s Santos Tour Down Under’23 Prologue: Bettiol Batters the Prologue!