Women’s Santos Tour Down Under’23 Stage 2: Manly Sprints Into the Lead!

Race Report: Singapore Airlines Women’s Stage 2: South Australia’s Alex Manly powered to a historic Singapore Airlines stage 2 win as the Santos Tour Down Under conquered Uraidla after a Birdwood start on Monday. Manly, 26, is in pole position, eight seconds ahead of Grace Brown from FDJ-SUEZ and Georgia Williams from EF Education-Tibco-SVB after a furious 90km. 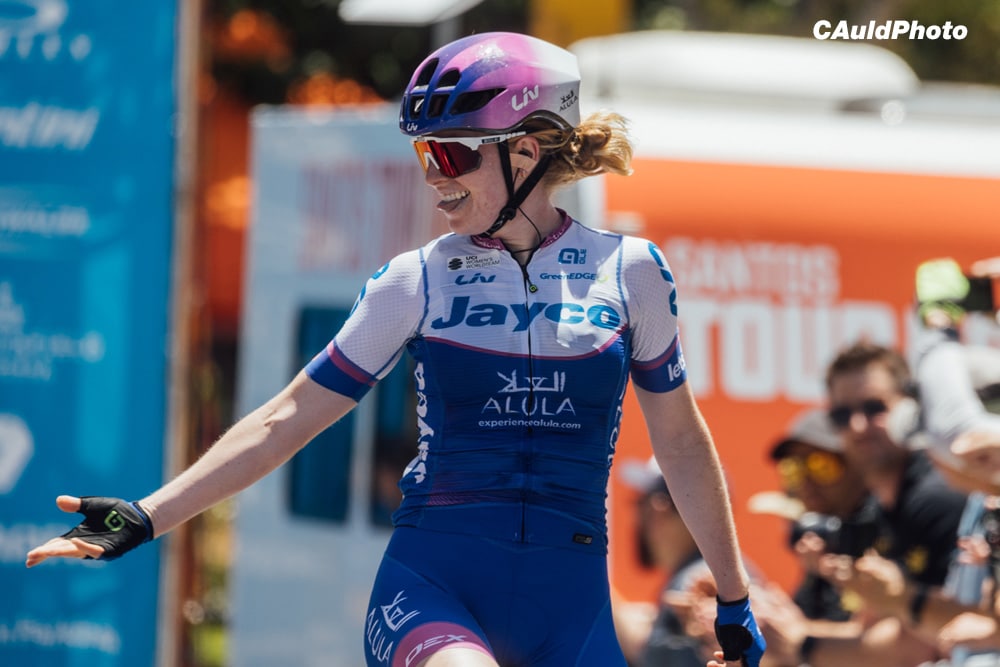 “We just had the perfect lead out and yeah I’m so thankful,” Manly said. “To do this in my backyard is just so nice.”

Manly will wear the ochre leader’s jersey on the final women’s Let’s Go stage 3 Adelaide to Campbelltown on Tuesday. She bumped Sunday’s ochre Tour Down Under leader Daria Pikulik out of the prestigious jersey after a brilliant tactical performance from her team Jayco-AlUla.

Amanda Spratt from Trek Segafredo opening a 15-second gap with just 3.5km before the Uraidla finish line was an ominous sign for her rivals. 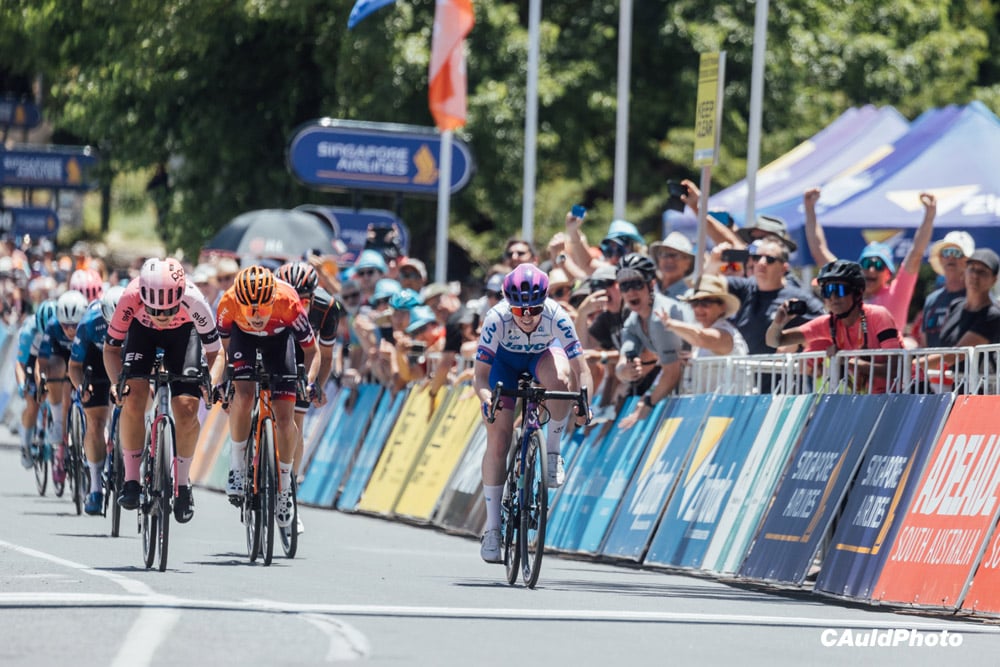 However, Manly’s team’s stunning lead-out work vetoed Spratt’s hopes of a stage win. Spratt, a three-time Santos Tour Down Under champion, was engulfed by Jayco-AlUla and rival teams Trek-Segrafredo and FDJ-SUEZ but Manly did have concerns that her former teammate could have been too strong at the Uraidla finish line.

“I knew that (final) part of the road is always painful even when you go on a training ride,” Manly said. “So, I just tried to make sure I had the momentum and of course, Spratty was going to take the opportunity to attack. I tried to go (catch her) but I just didn’t have the same legs as Spratty on the climb. I guess me being there (at the front of the race) forced the others to chase a bit and then I knew the descent and we tried to bridge back some time there.”

However, Manly’s team appeared intent to wrestle the ochre from Pikulik from the off after the Pole’s stunning Ziptrak Stage 1 victory at Snapper Point Aldinga. Pikulik was well protected by her Human Powered Health teammates but appeared to be out of contention long before Manly’s victory. Italy’s Ilaria Sanguineti from Trek-Segafredo beat the bunch to the first prize of the day – the Ziptrak preme sprint in front of the Kersbrook Town Hall at 34.5km. 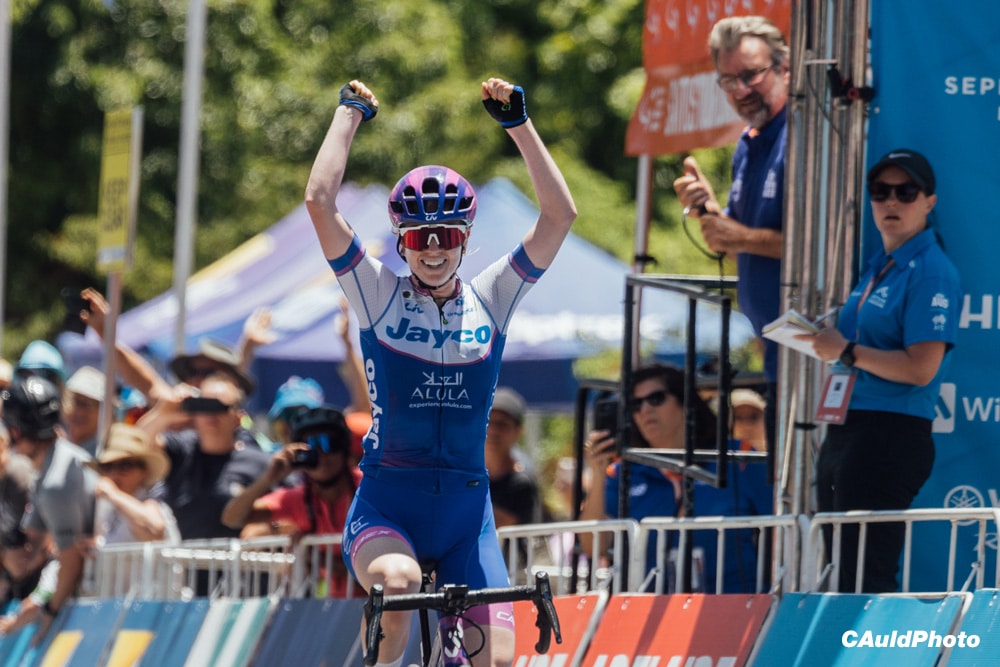 Verhulst conquered North East Ridge, Chain of Ponds at 40.5km before the race was marred by a crash when Team Australia’s Nicole Frain – the 2022 national road champion – and Emily Watts from Team Bridgelane touched wheels. Frain returned to the race, but Watts needed medical attention after hitting the tarmac hard about 30km from the Uraidla finish line. 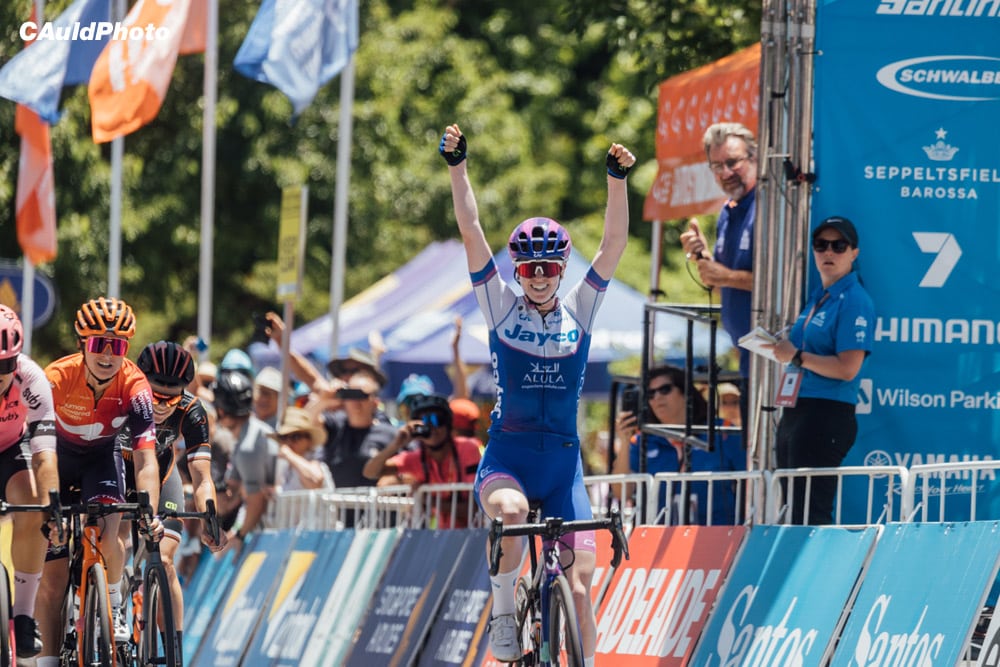 With 20km before Manly’s fireworks, Georgie Howe from Jayco AlUla marked most of the moves at the front of the peloton as teammates Amber Pate and Ruby Roseman-Gannon worked furiously in 31C heat. Clair Steels from Israel Premier Tech then picked up three bonus seconds crossing the line first in the second Ziptrak preme sprint at Summertown, before the grand finale. 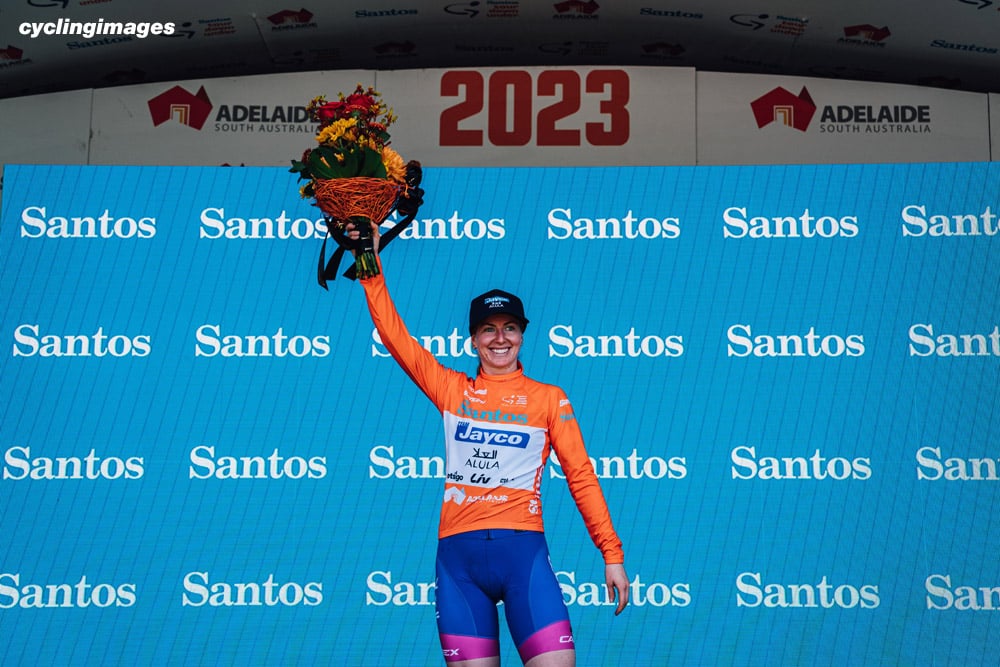 [STAGE WINNER AND SANTOS OCHRE LEADER’S JERSEY] ALEX MANLY, Jayco-Alula:
It didn’t look like it was going to be you (winning) but you pulled it off.
Yes, it was a hot stage all day and things were constantly happening. At the finish after that last sprint, I decided to keep going, I think I gambled a little bit and luckily it all came together.

It’s a home race for you, that must be very special for you?
It’s super special. A lot of my friends were out on the finish line, so it was really nice.

How important was strength in numbers today and will it be tomorrow?
I’m so lucky, I’ve got the best support out there so I think at the numbers will play to our advantage. I think Trek will try to put us under pressure but we’ll try and try and keep the jersey.

[EFEX QUEEN OF THE MOUNTAIN] AMANDA SPRATT, Trek Segafredo:
The plan was to go out there, but obviously, stay away.
We knew we just need to make the most of every opportunity here. It’s a three-day tour and we thought today is harder than what looks like on paper. So, we really had a plan to set it up hard from kilometre 65. The girls did a really, really great job of setting that up, ready to take the last pull into the climb. I knew exactly where I wanted to attack. There was just a few too many riders left in that chase group and they got organized pretty quickly. And I kept believing all the way into the finish, but it was just 500 meters too long. I think if anything, we can get a lot of confidence from today. And the way that the team raced really stuck to our plan. I was feeling really good on the climb and I think tomorrow is a much harder climb and we just have to leave absolutely nothing out there – we’re going to give it everything we have. We’re still dreaming of that ochre jersey, and I think with the team we have here it’s possible.

It must be good to get back into shape at the start of the year ahead of the rest of your races.
It feels really amazing. This has been my first normal pre-season since 2019. It’s pretty special to have had that at home – TDU is one of my favourite races on the calendar so I’m always really motivated. It feels extra special that Trek picked me up as a rider. (They have some of) the best riders so I really want to repay them for their faith as well. I come here really motivated and wanting to get a result.

It’s been good team form so far from Human Powered Health – you guys are killing it.
We’ve got an awesome team here; the team atmosphere is incredible. We have Joanne Kiesanowski directing us here and she’s amazing at her job and came here with a clear plan and it’s great to see it working out. 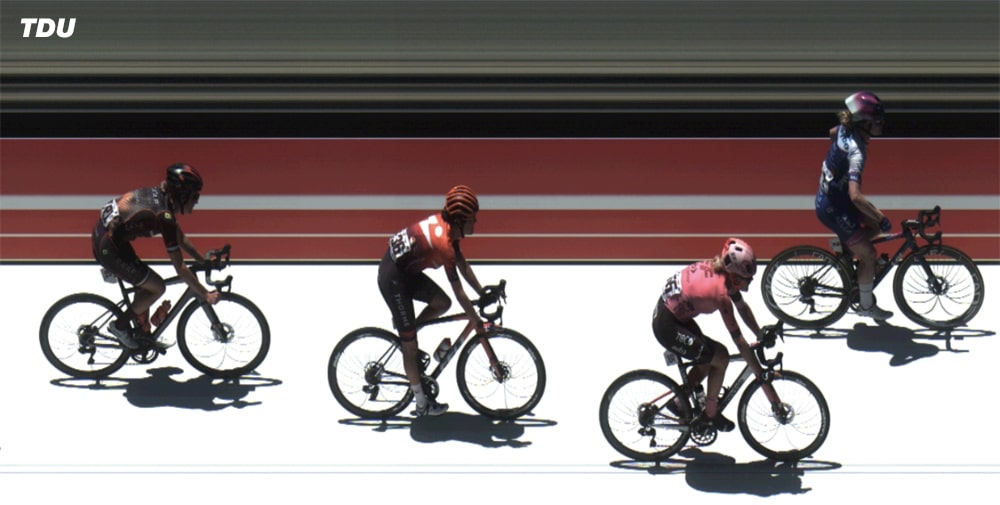 EUROTRASH Monday: Action From Down Under & All the Other Cycling News