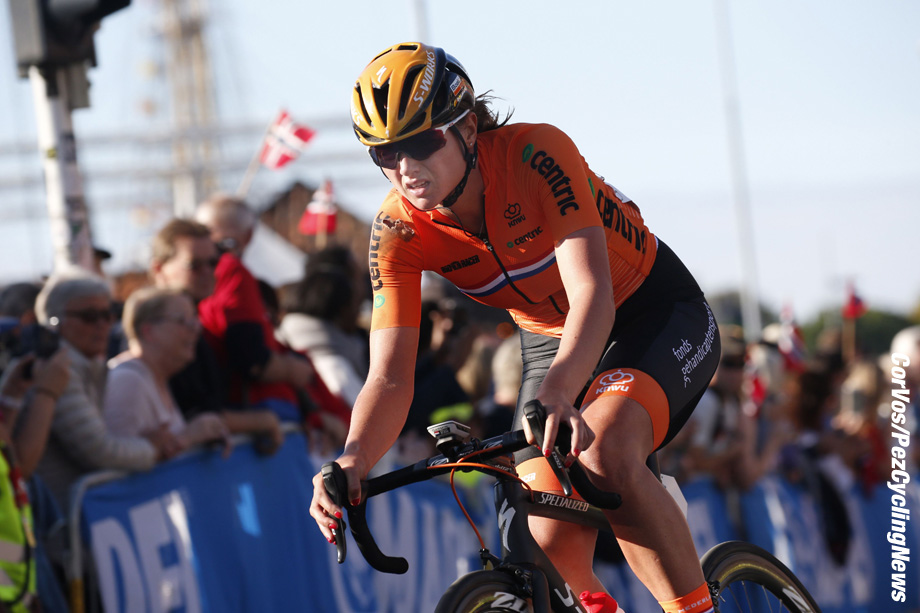 Chantal Blaak took her chance and went for it

Caught in a mid-race crash, in a lot of pain, Blaak got back on and got back in the race. Her reward is the ultimate prize on the women’s annual calendar. Riding for the mighty Boels-Dolmans through the season, Blaak has to take advantage of her few opportunities when they present themselves. Today, she was handed the chance of a lifetime, and she grabbed it… 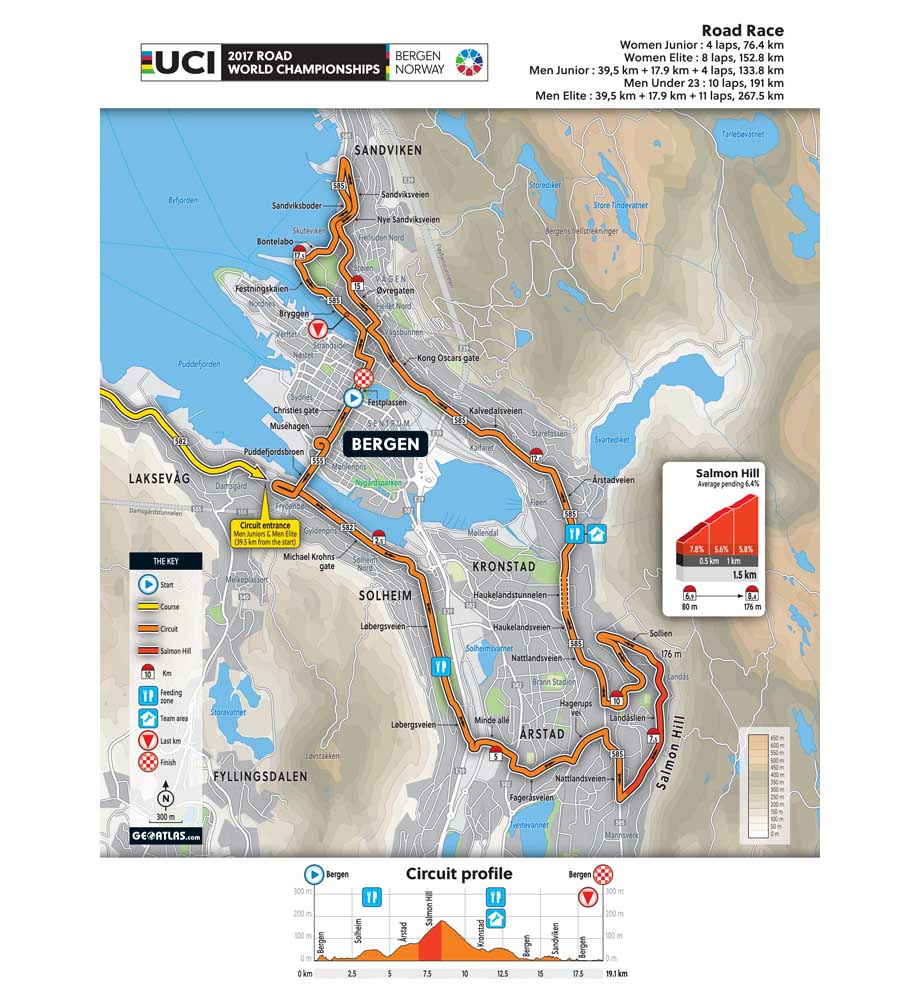 The elite women faced eight laps of the beautiful 19.1-kilometer Bergen circuit for a race distance of 152.8kms (95.5 miles).

Team GB, Poland, Italy and Belgium all brought strong squads to the line, but none to match the firepower of the Dutch. With Vos, Van Der Breggen, Van Dijk, Van Vleuten, Pieters, Blaak, Ensing and Brand racing it looked like eight capable of winning and picking a leader may have been impossible. Van Vleuten stormed to the time trial world title in mid-week and was looking to follow up on Jeannie Longo’s TT/road worlds double of 1995.

Swedish champion Sarah Penton was the first to move, jumping very early, but no-one went with her and it was a pretty lonely furrow to plough until Team GB’s Mel Lowther caught and then passed her approaching 108 kilometers to go. 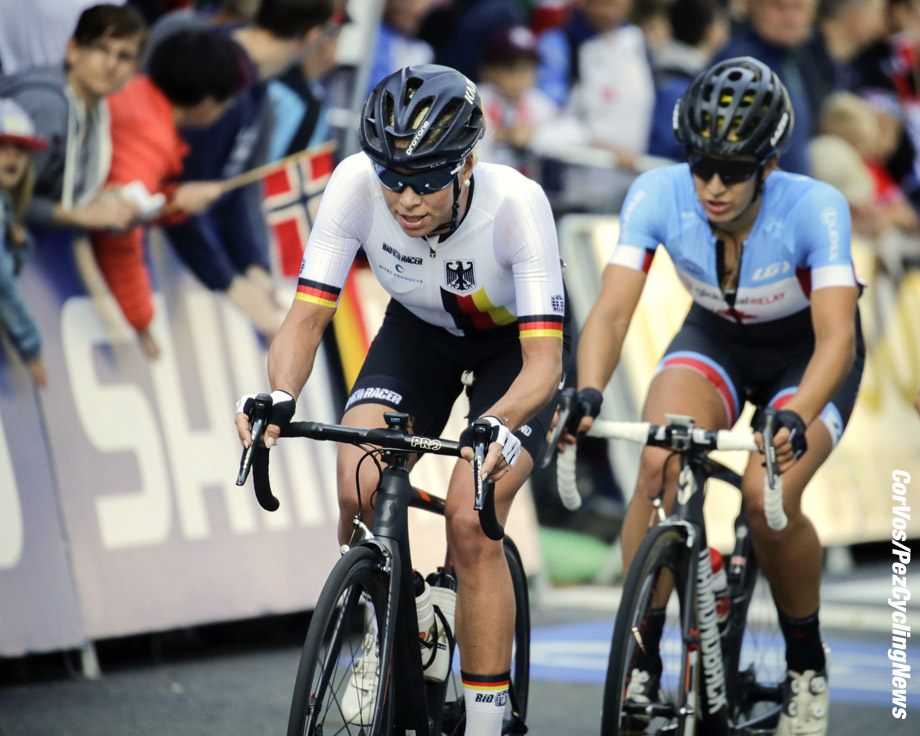 Germany, Switzerland and GB kept the early stages in check on the head of the peloton. Just inside 100kms to go, Ellen Van Dijk blasted away to join Lowther, the young Brit looking pretty damn relieved to have some company, as the peloton closed in.

The race grew more and more attritional, the peloton bunching up and then stretching every time they hit Salmon Hill in the middle of the circuit. Bergen gets rained on 250 days a year apparently, but today the city was bathed in glorious sunshine. The multi-colored buildings of the UNESCO heritage site of the old wharf gleaming. 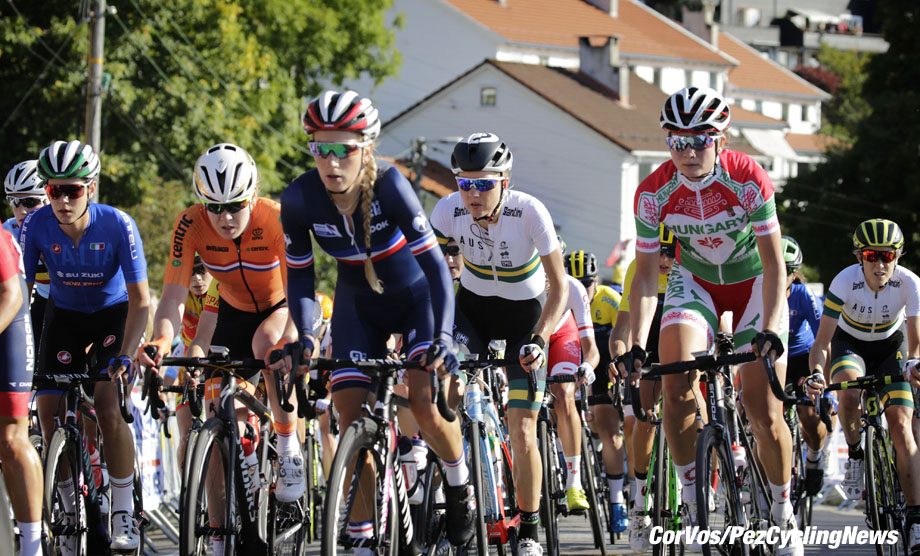 Half-distance saw the home favorite Susanne Andersen cross the line in Festplassen ten seconds ahead of the field, and a few clicks down the road, Van Dijk again shot up to the lone leader. This was the fuse of the race being lit. A frantic scramble to catch Van Dijk saw Amy Pieters jump clear in a one-two move. 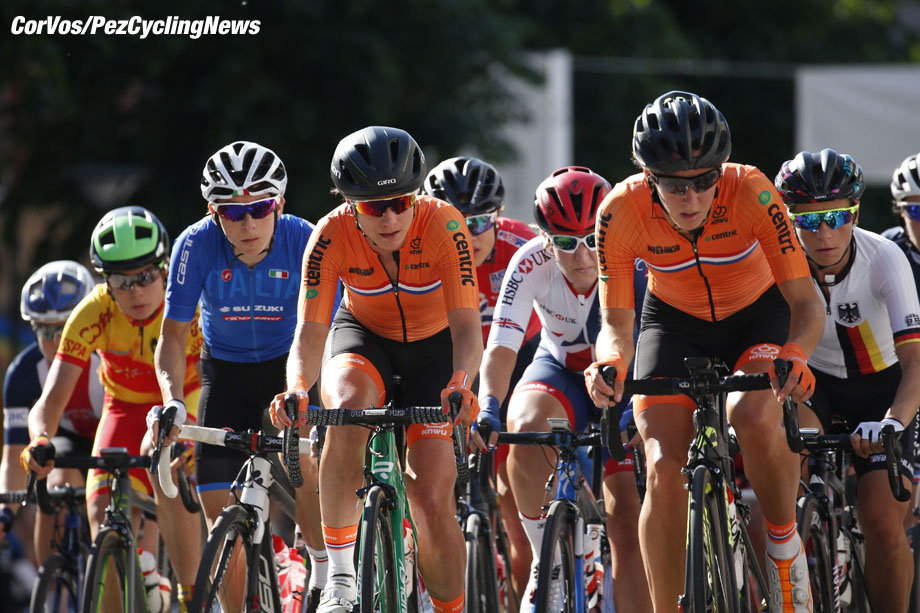 The Dutch team were working for the win all day

Team GB’s Hannah Barnes went across, joined by former Worlds medallist Rachel Neylan. The Australian hadn’t even been selected initially as her nation chose only five riders for seven spots, relenting after an appeal.

66 kms to go and a big crash on the descent off Salmon Hill, right at the front of the main field: Chantal Blaak was left limping, Megan Guarnier of the USA took a real clatter. Italian favorite Elisa Longo Borghini stopped to push Elena Cecchini back into the race, so big problems for Italy: one star on the deck, and one clearly not feeling right having been dropped on the climb. 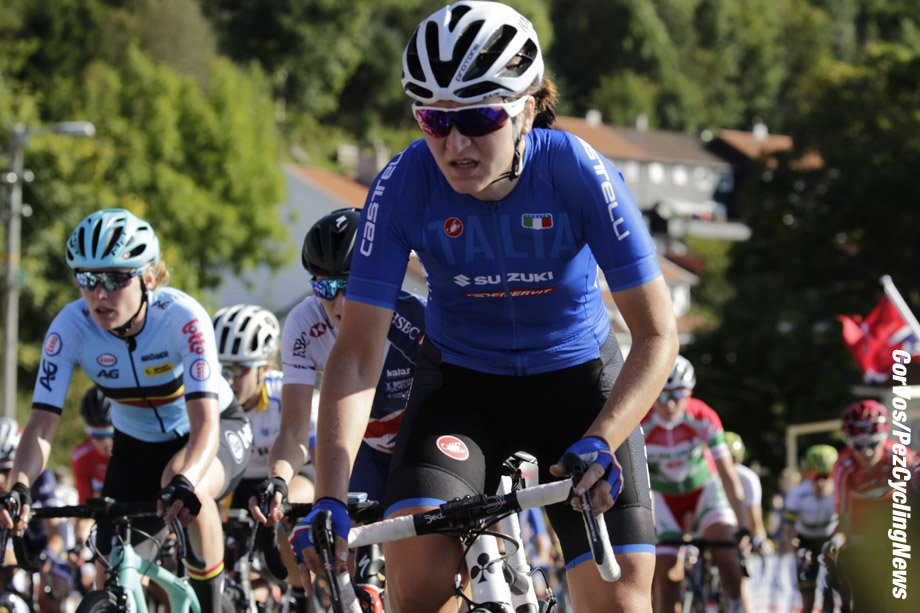 It was not Elisa Longo Borghini’s day

The domestiques came forward to try and impose order after the crash: Katie Hall (USA) and Dani King (GB) on the front just 35” behind the leaders with three laps to go.

Dipping under 50 kilometers to race, Elinor Barker (GB) cruised across to the lead trio, and with 45kms to go Team GB had four riders on the head of the field. The escape changed again: Lucinda Brand joined her compatriot Pieters, Barnes and Gracie Elvin (second in Flanders this spring) replaced Neylan for Australia. Their break was over just inside 40 to go, under a chase from Denmark and the USA. 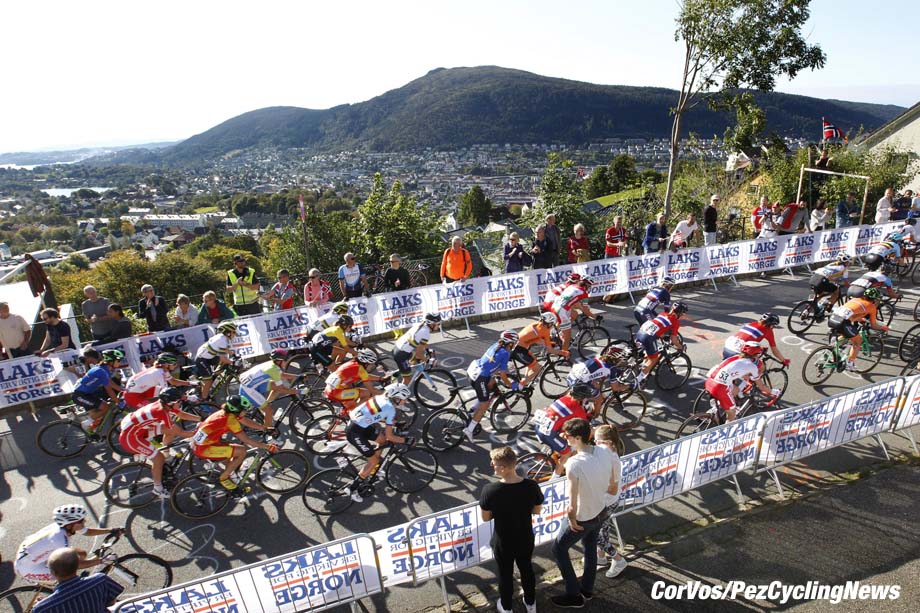 The action was on the climb of Salmon Hill

Two laps to go: all together on the line with Leah Kirchmann (Canada) leading them through. The first hard kick came from Audrey Cordon-Ragot (France) which stretched the field into one long, agonized line.

30 kilometers to go, and the nervous Dutch triggered a counter with Van Der Breggen and Van Vleuten pulling clear the real top riders: Niewiadoma, Deignan, Ferrand-Prevot, Garfoot, Uttrup Ludwig. The King-led attack was over and the Dutch laid down more pain. 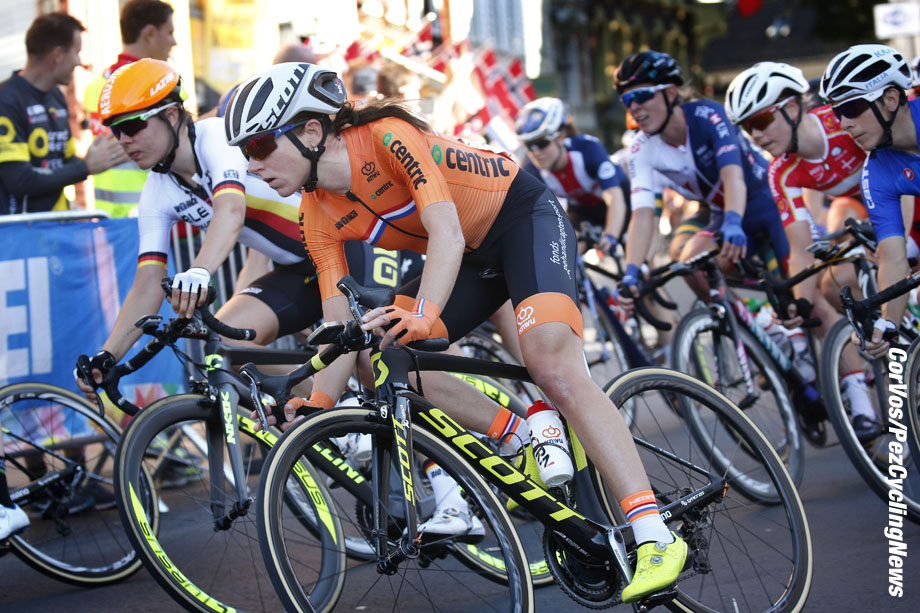 Annemiek Van Vleuten was always near the front

25 clicks left and the leading selection was: Van Vleuten, Ensing and Van Der Breggen (Netherlands), King and Deignan (GB), Guderzo (Italy), Garfoot and Spratt (Australia), Ferrand-Prevot and Delzenne (France), Niewiadoma (Poland), Nilsson (Sweden), Uttrup Ludwig (Denmark). The fragmented peloton with USA, Germany and Canada involved in the chase was in touch, closing things up. As soon as the catch was made, Chantal Blaak blasted clear, taking Cordon-Ragot and Hannah Barnes with her.

Last lap, 19.1 kilometers to race: Blaak, Barnes and Cordon-Ragot led it through the bell, with Australia’s Sarah Roy solo chasing at 11” and the peloton at 32”. Team USA chasing frantically for Coryn Rivera, with Poland and Netherlands keeping an eye on things. With Roy in no-woman’s-land between escape and peloton, the Aussies were tactically blocked; the peloton was fanned across the road, but there was a wall of orange to the fore. 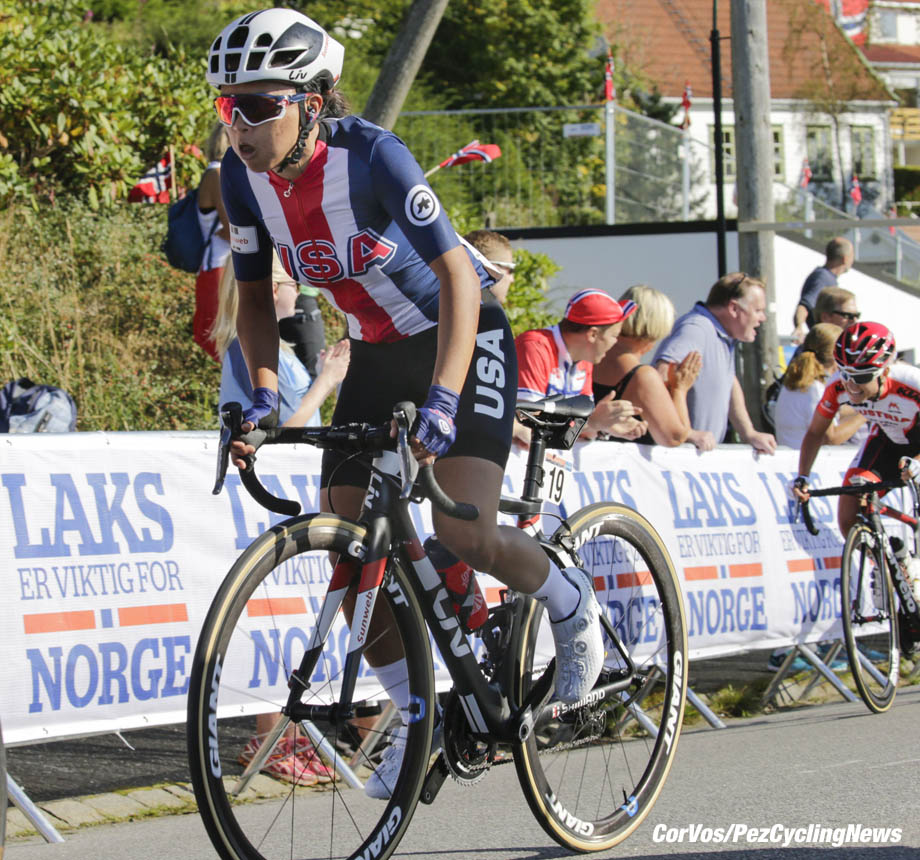 13.6 kms left and the Dutch rile the main field up again, through Van Der Breggen and Van Vleuten. 12 kilometers to go: the escape hit Salmon Hill for the last time; behind the Netherlands tried to stretch it with Van Vleuten lighting the paper. Nieiwadoma flew past with Van Der Breggen barely clawed up to her, joined by Garfoot. Van Vleuten hammered straight past the Blaak/Barnes/Cordon escape over the top of Salmon Hill.

Eight to go: Blaak took off, a huge attack. Barnes flicked her elbow receiving no co-operation and the two remaining Dutch riders simply sat at the back and watched their team-mate .

Inside four to go, Nieiwadoma launched a desperate chase, followed by Van Vleuten, Garfoot and Van Der Breggen. After another lull, it was Barnes trying to sweep away.

Under the red kite: Blaak was solo and flying to a glorious World title. The peloton suddenly closed down on the remaining escapees, but Blaak was clear and winning, in disbelief. It was suddenly a huge sprint for the silver and bronze with Garfoot holding off the defending world champion Amelie Dideriksen. 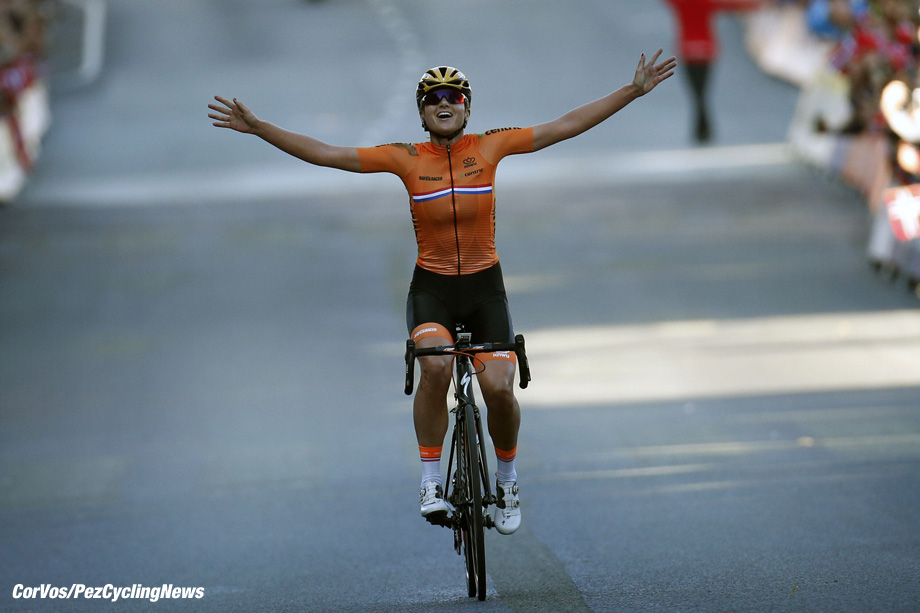 A great world championship race, in a beautiful setting gave us a worthy rainbow jersey winner. 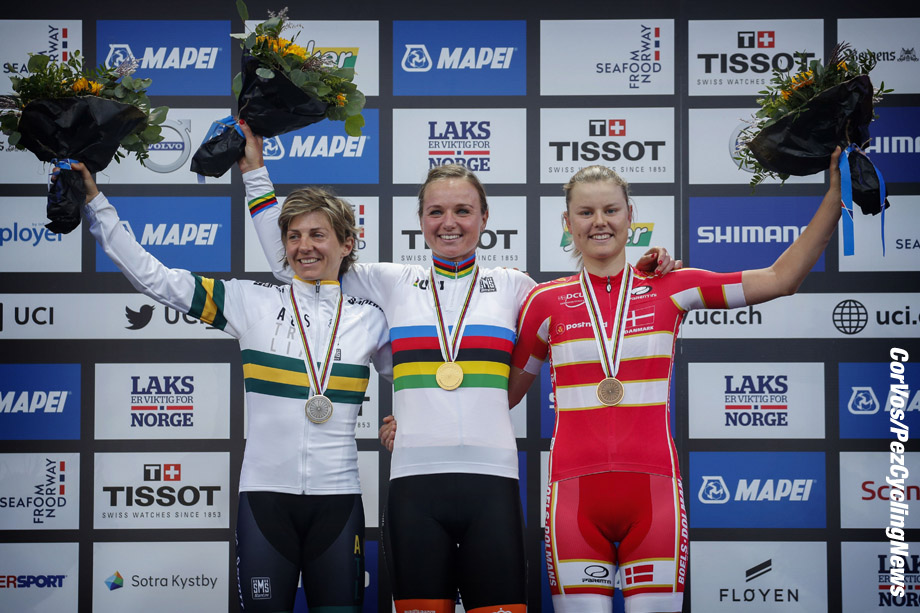