Worlds Race Report: An exciting finalé of attacks and counter-attacks came down to a sprint from a select group. The Italian team took control in the last kilometre to put Elisa Balsamo over the line first ahead of Marianne Vos. Poland’s Katarzyna Niewiadoma took the bronze medal.

Elisa Balsamo is the new women’s World champion. After a race of 157.7 kilometres, the 23-year-old Italian turned out to be the fastest rider in Leuven. Marianne Vos (Netherlands) was a disappointed second and Katarzyna Niewiadoma (Poland) took third place at 1 second. 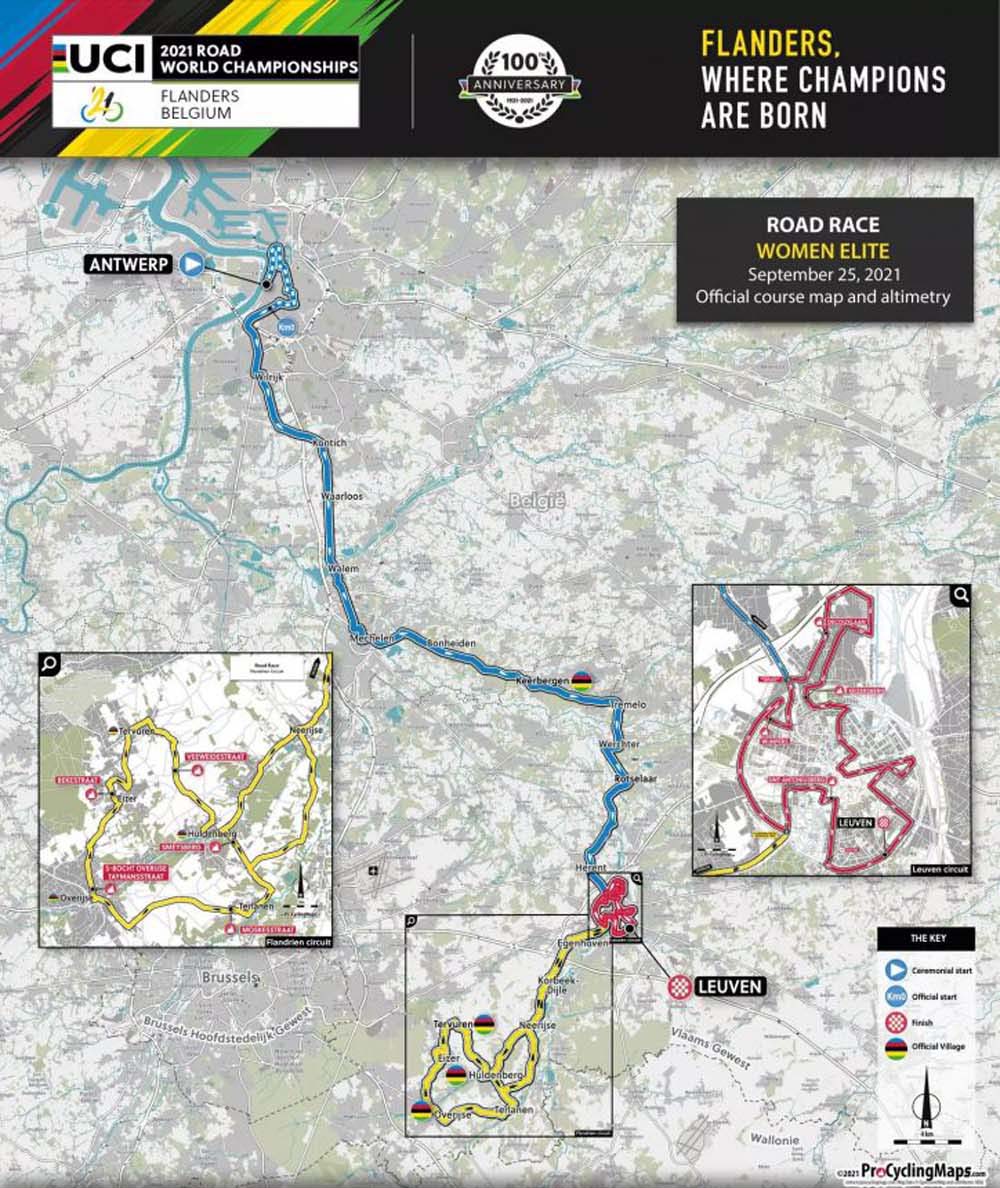 After the start in the Grote Markt of Antwerp there is a 9.1 kilometre neutralised zone. Via a more than 55 kilometres long run-up, the race heads in the direction of Leuven. Two circuits in the city of Leuven. The 15.5 kilometre long Leuven Circuit leads the riders through the city centre. The circuit has four climbs: the Sint-Antoniusberg (230 metres at 5.5%, max. 11%), Keizersberg (290 metres at 6.6%, max. 9%), Decouxlaan (975 metres at 2.5% , max. 6%) and the Wine Press (360 metres at 7.9%, max. 9%). After the long run-up from Antwerp, the course links up with the local circuits, making the Wijnpers the first climb of the day. After one and a half times round the Leuven circuit, the course continues to the Flandrien Circuit.

This circuit around Overijse is 32 kilometres and has six short and tough climbs with the Smeysberg (700 metres at 8.8%, max. 16%), the cobblestone climb of the Moskesstraat (550 metres at 8%, max. 16%), the S-curve in the centre of Overijse (738 metres at 5 .5%, max. 18.3%) in combination with Taymansstraat, the steep and narrow Bekestraat (439 meters at 7.7%, max. 15%), Veeweidestraat (484 metres at 5.2%, max. 12%) and a second passage of the Smeysberg. After the last climb, the riders will ride in the opposite direction on the same roads back to Leuven. Once back in Leuven, the women have to complete the circuit 2.5 times more. There are still eight of the twenty slopes to contest. The third ascent of the Sint-Antoniusberg (a narrow climb with cobbles) is the last climb of the day 2 kilometres from the finish. Positioning is key, because the slightly up hill finish on the Geldenaaksevest comes very soon after. 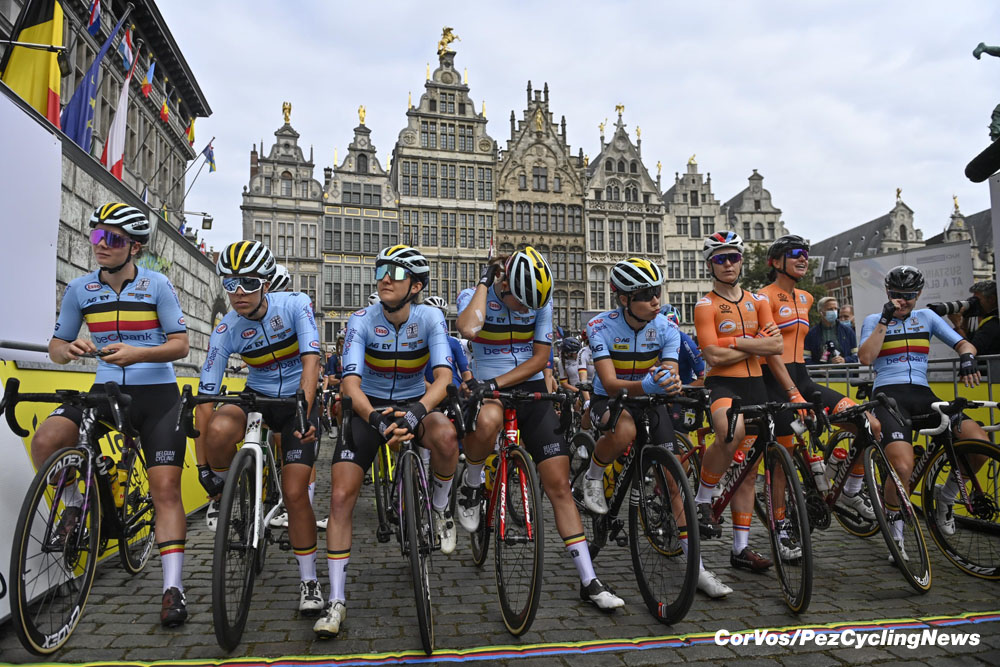 The start in old Antwerp 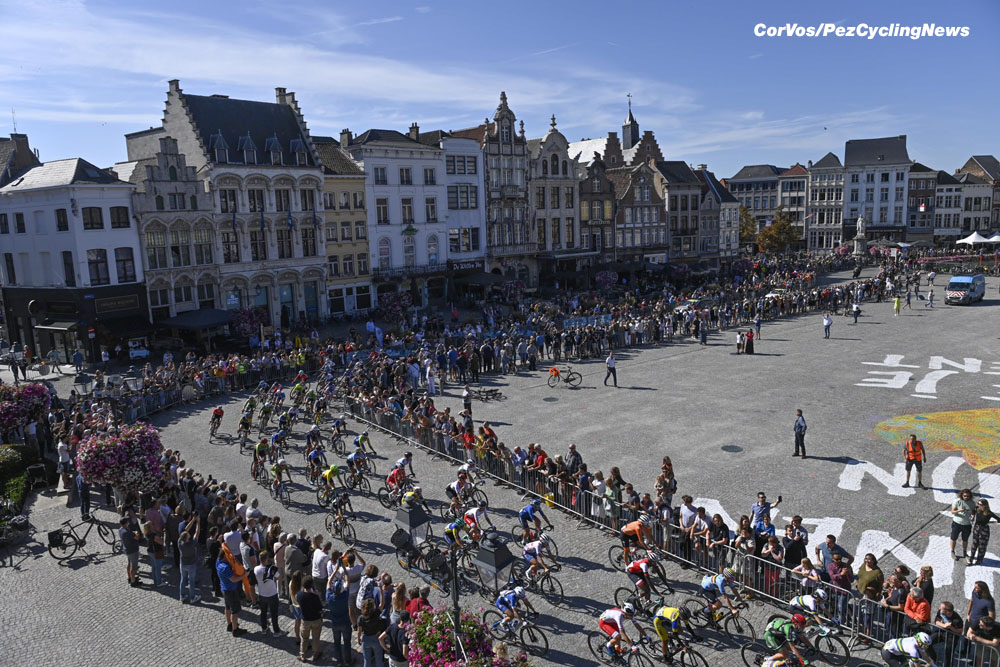 The women’s World championships race was also a farewell to Anna van der Breggen. After ten years of racing at professional level, 31-year-old Van der Breggen will start working as a sports director for SD Worx next year. 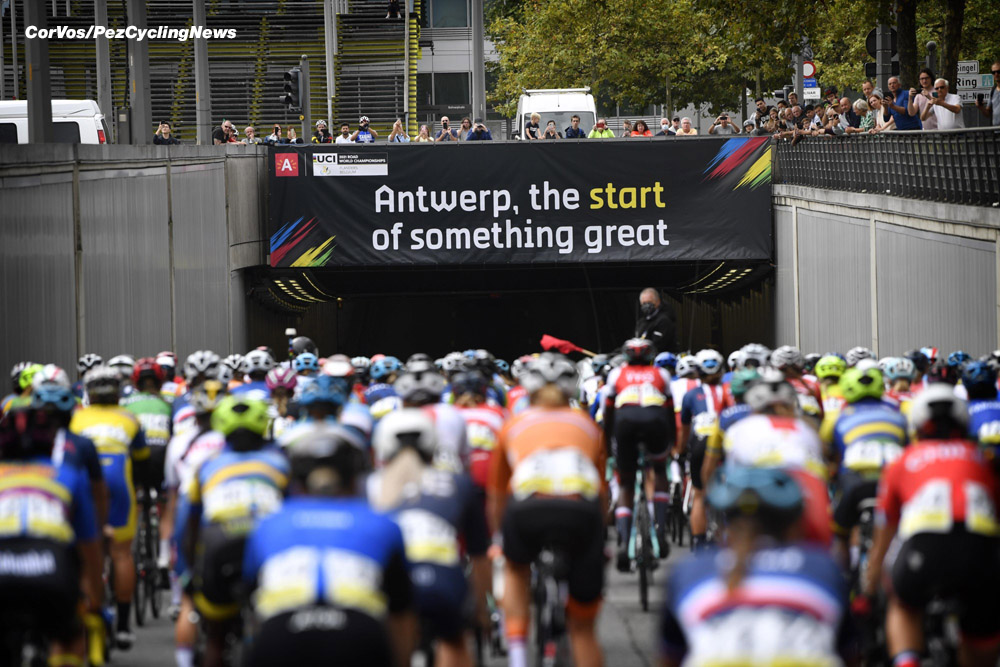 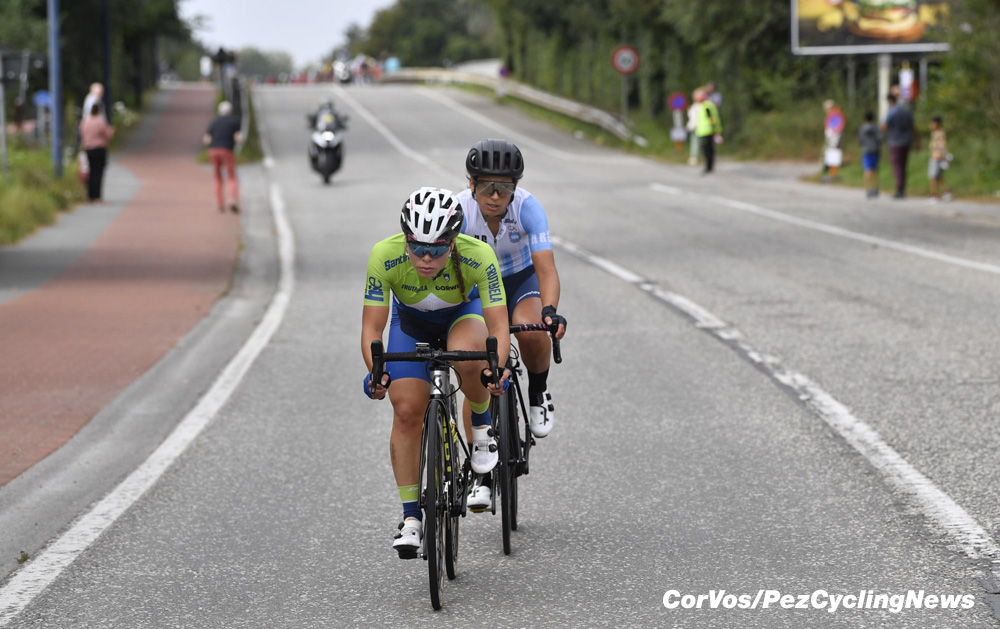 The first break of the day: Luciana Roland (ARG) and Urska Bravec (SLO)

Van der Breggen wasn’t among the top favourites in the hilly race around Leuven. The Dutch woman had already indicated in advance that she would be working for the other Dutch women. As a thank you for their work over the past decade, in the first hours of the race she regularly fetched water for her teammates. The race was not particularly exciting at that time, because there was no early escapes except a short time off the front by Luciana Roland and Urska Bravec. 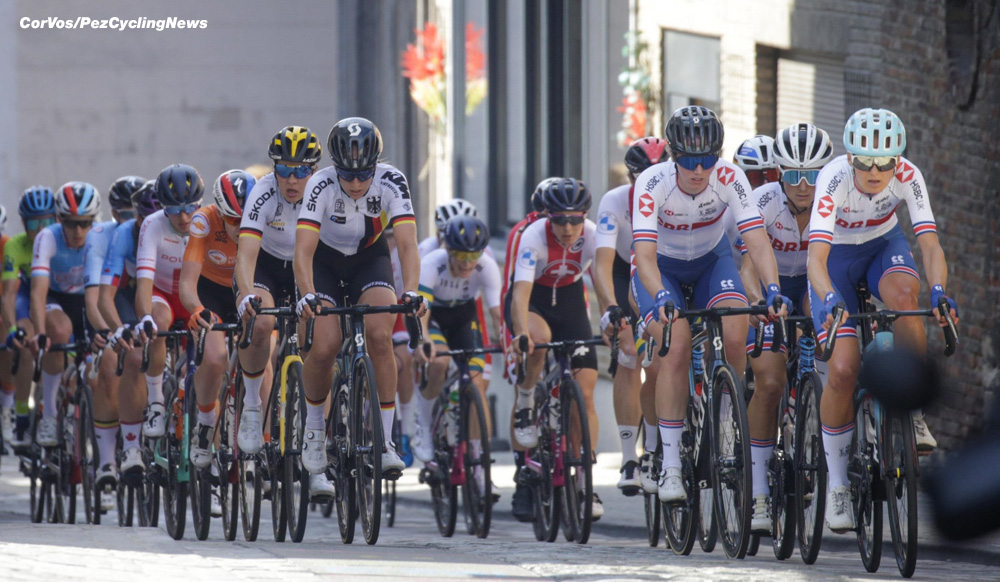 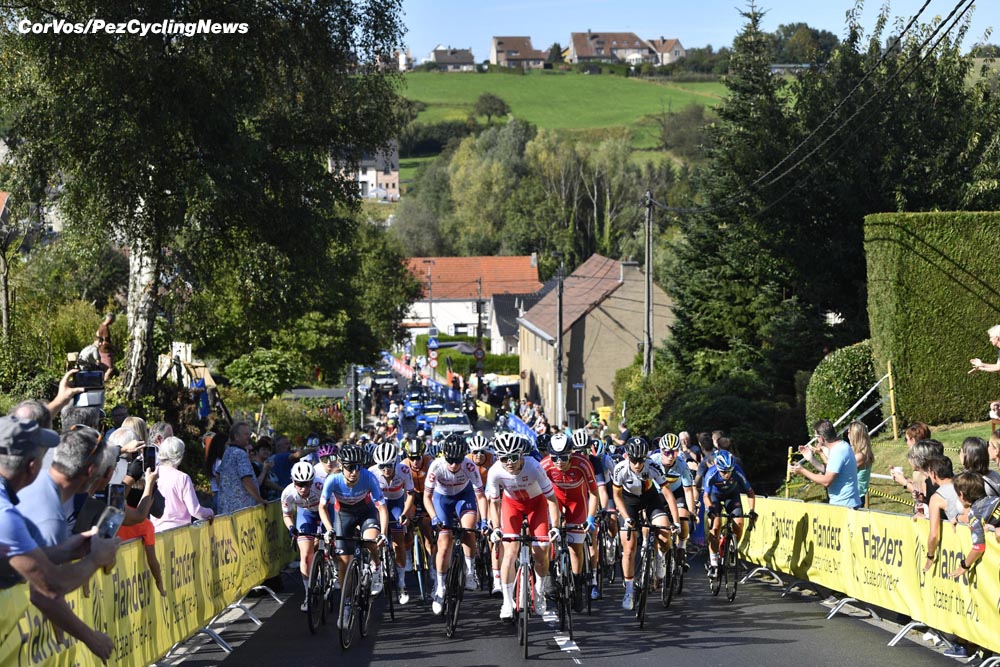 The first two hours were run at 41kph

When entering the Leuven circuit, 100 kilometres from the finish, the pace lifted due to the Netherlands team. Some riders had already been dropped. Michaela Drummond went for a solo ride for a while, but it was a long wait for a serious attack. While attacks were expected on the Smeysberg and Moskesstraat at 70 kilometres from the finish, it remained surprisingly quiet. The only real action was Demi Vollering who had to change bikes due to a mechanical. 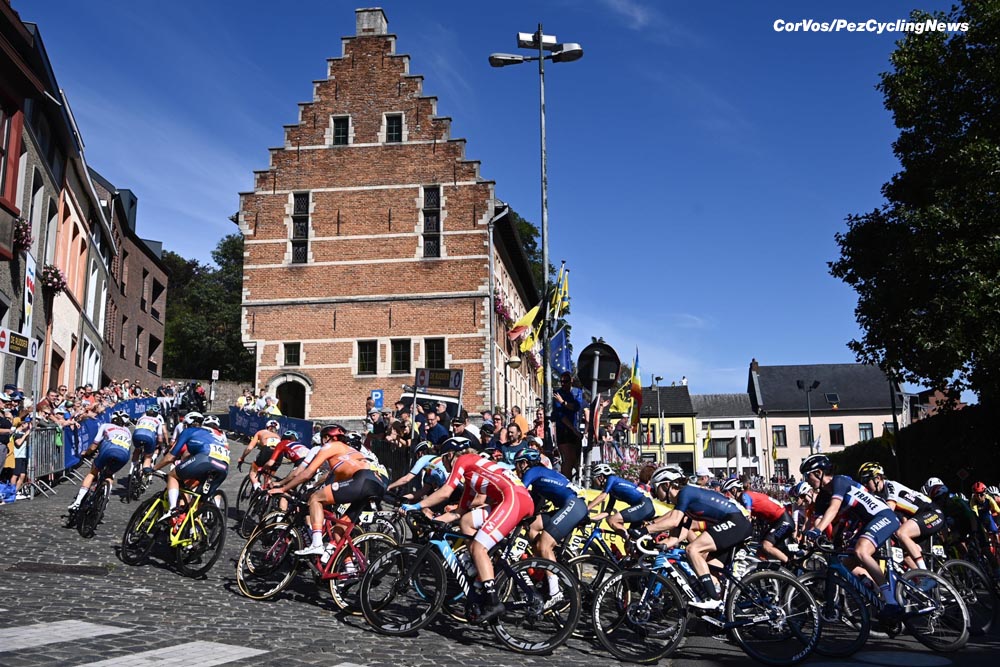 A far from easy course 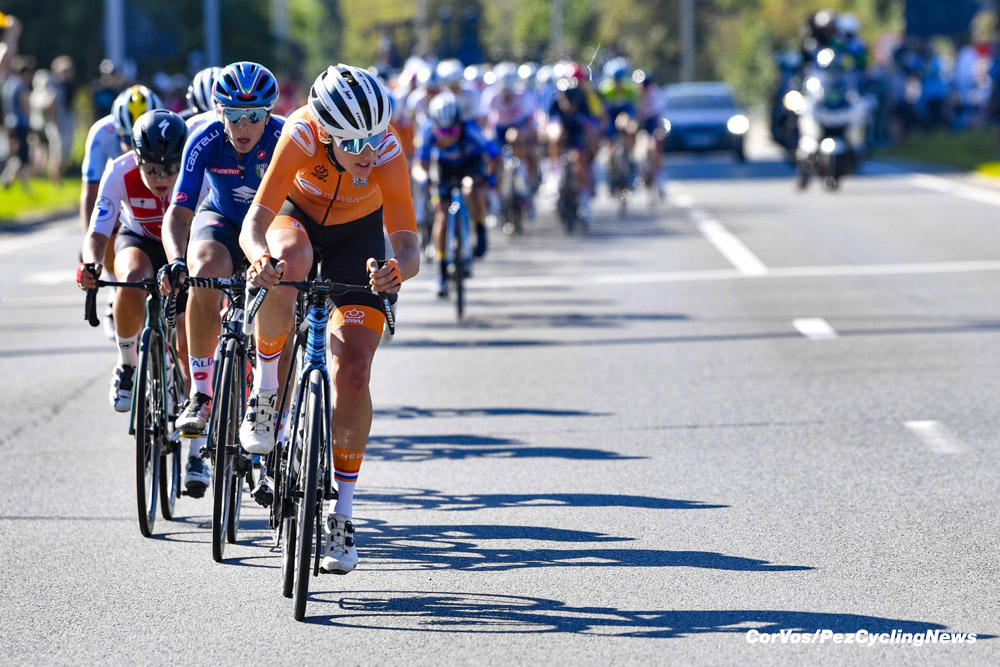 As expected the Dutch team wanted to control the race

Soon after, the race split apart. There were attacks by Alissa Jackson, Annemiek van Vleuten and Lucinda Brand, but this did not lead to a break. Ten kilometres later, after attacks by Ashleigh Moolman-Pasio, Anna Henderson and again Van Vleuten, the race was still together, although the peloton was getting smaller all the time. 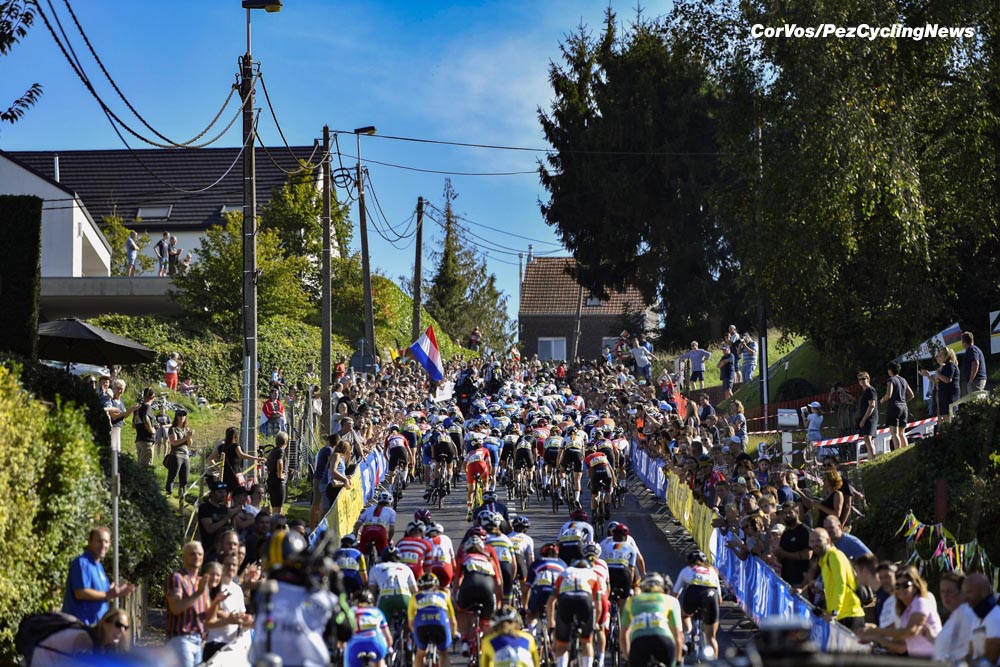 The fans were out 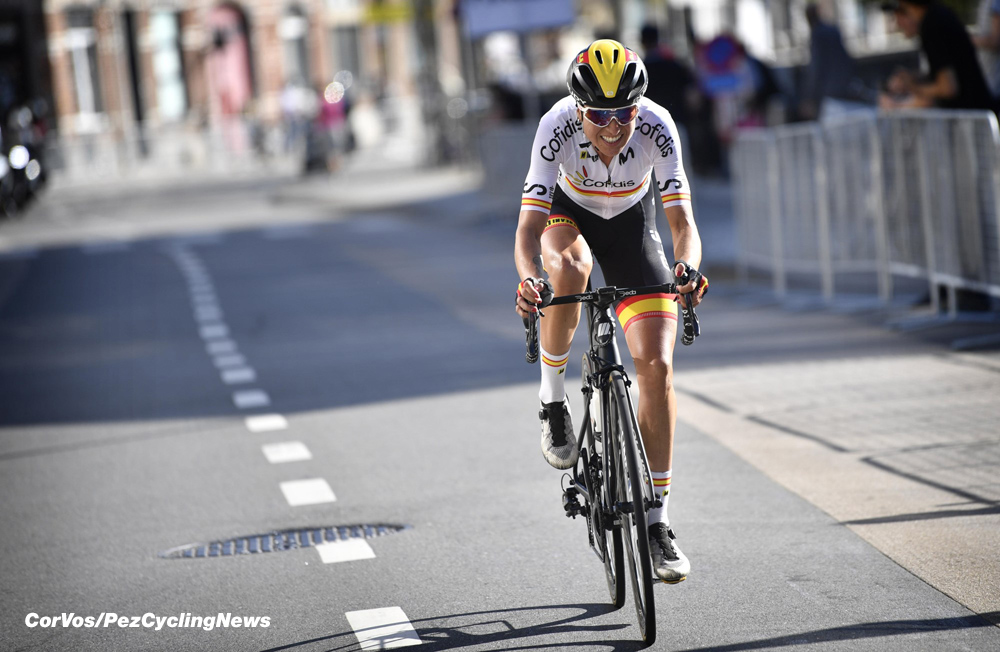 Many riders tried, but for a long time the race was not selective enough to make any differences. Aude Biannic, Marlen Reusser and Mavi Garcia all rode off the front for a few kilometres. Garcia was probably the best, but had attacked too early and was pulled back in the last 10 kilometres. It was becoming clear by then that the battle for the rainbow jersey would come down to a sprint for this select group. 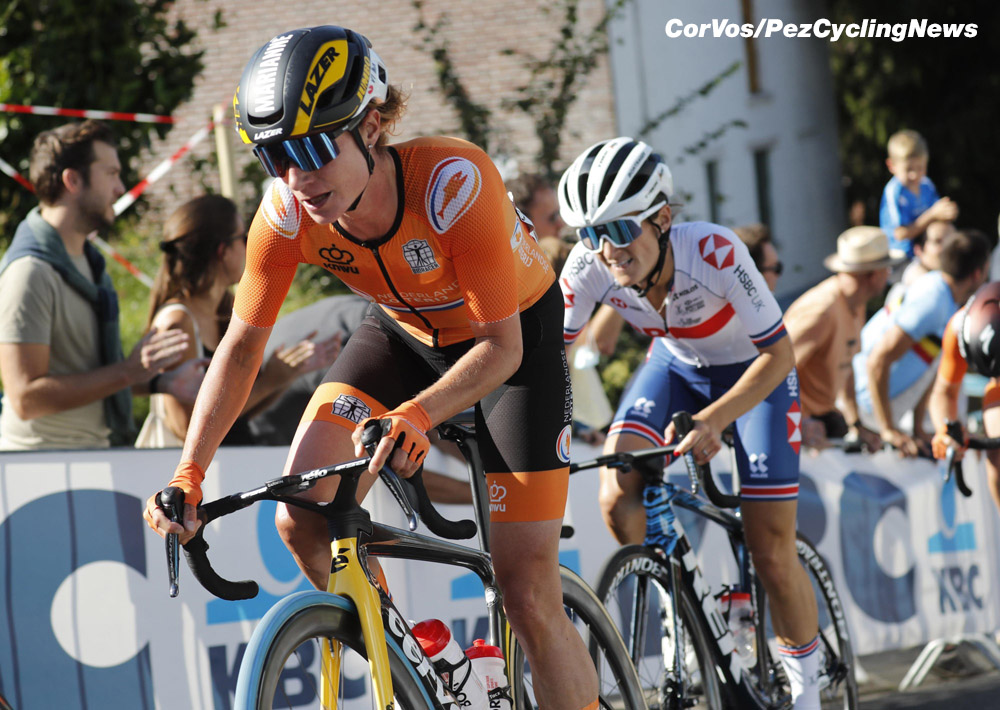 Vos was looking keen in the last Kilometres 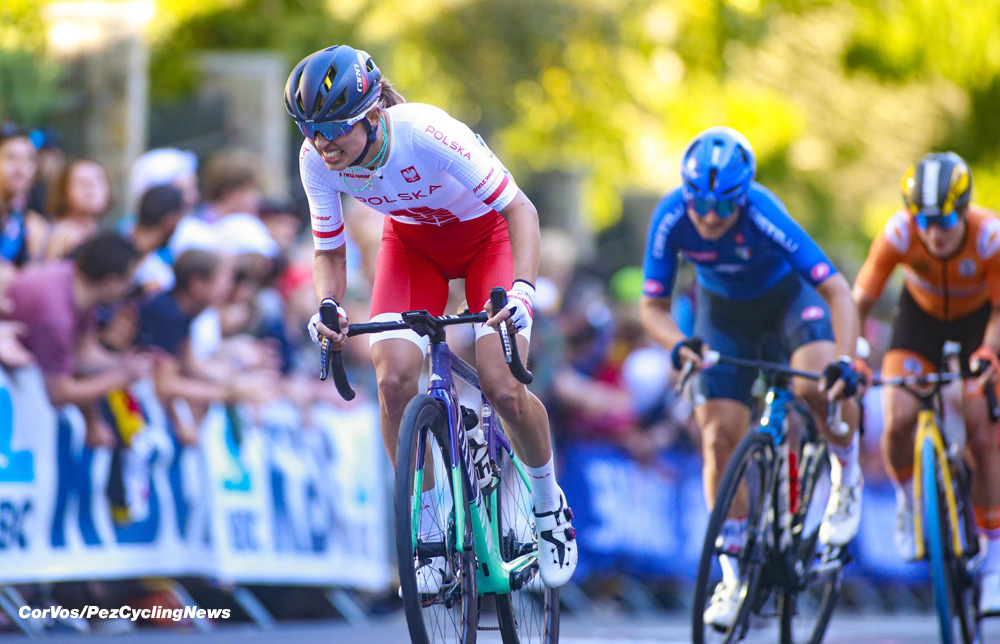 In the last ten kilometres there were attacks by Van Vleuten, Van Dijk and Ruth Winder, but they were also unsuccessful. Van Dijk’s last attempt at three kilometres was the most promising, but when she saw that Katarzyna Niewiadoma and Maria Confalonieri were on her wheel, she sat up. 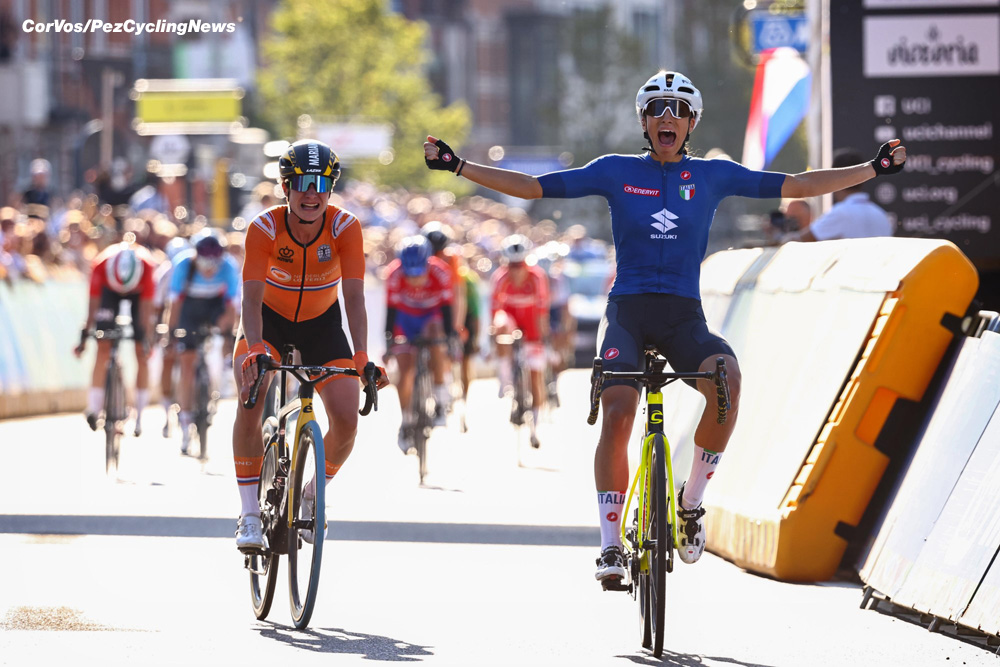 The Italian team were perfect in the last K

A sprint turned out to be inevitable. Balsamo was perfectly dropped off by her Italian teammates in the last metres, she then only had to sprint the last metres and hold off Marianne Vos for the win and the 2021 rainbow jersey. Vos was just short of her fourth World road title in second Place. A very strong looking Katarzyna Niewiadoma finished third at 1 second with the others in the group at her heels. 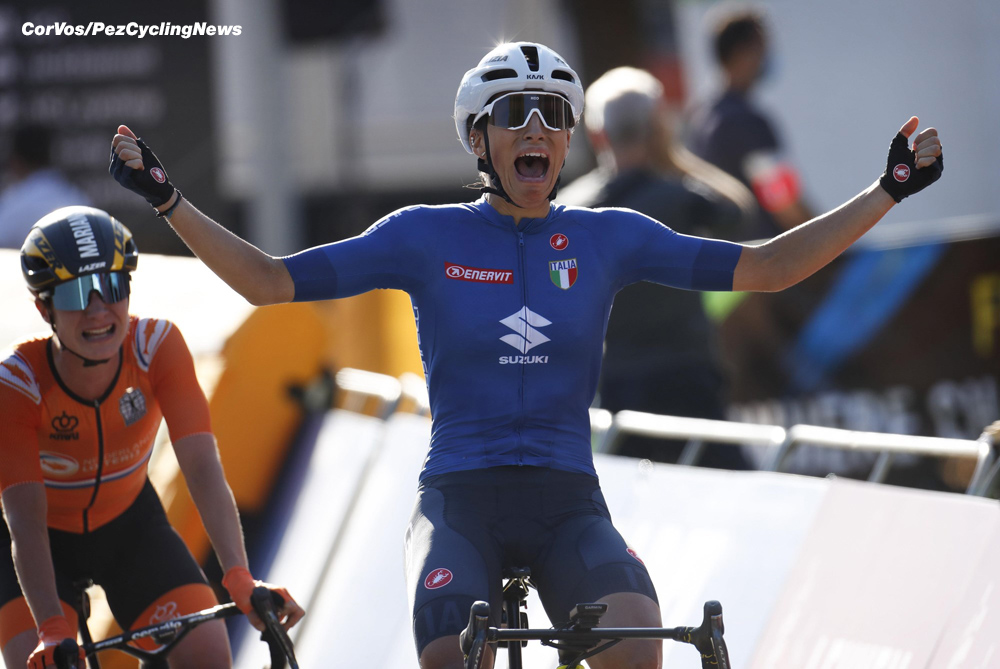 The win goes to Elisa Balsamo 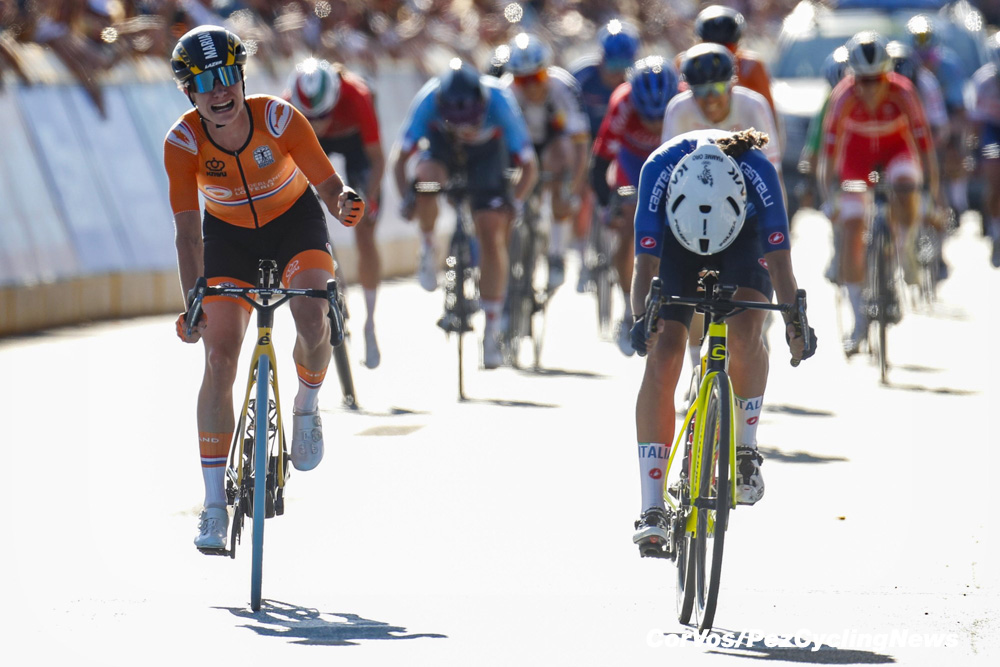 2021 World champion, Elisa Balsamo (Italy): “I have no words for this. This feeling is indescribable. I don’t remember it all. This is a dream for me, especially after such a long season. My team was very, very good. Without them this really wouldn’t have been possible. Sorry, but I have no words to describe this. My team’s lead-out was perfect. I trusted them fully and after the last corner I turned my mind off to give it my all. Next year I can ride in the rainbow jersey, which is incredible. There are a lot of people I have to thank, including my team, family and nutrition coach.” 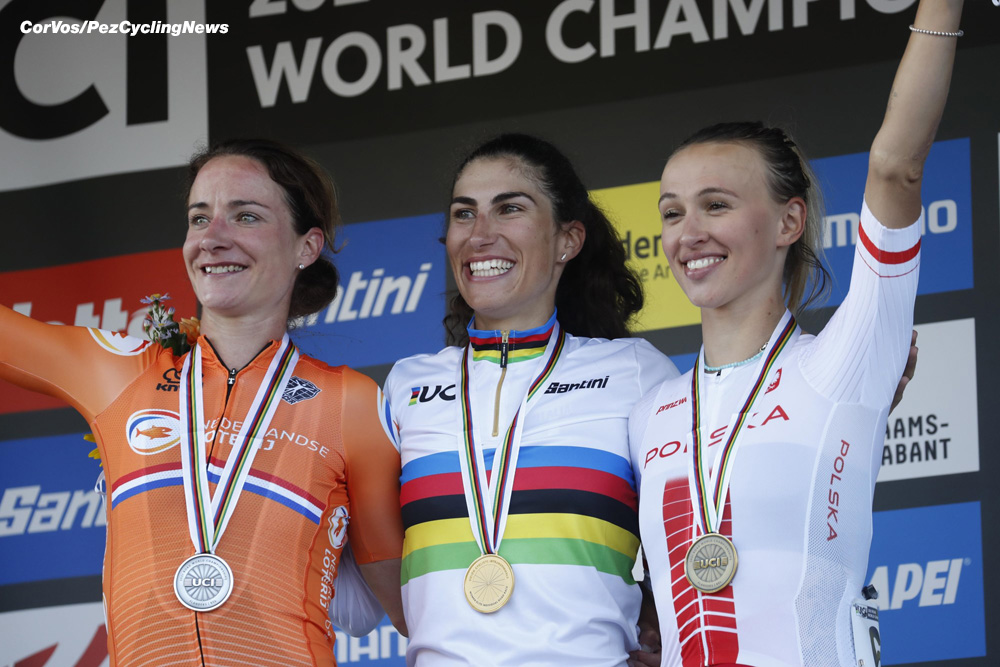