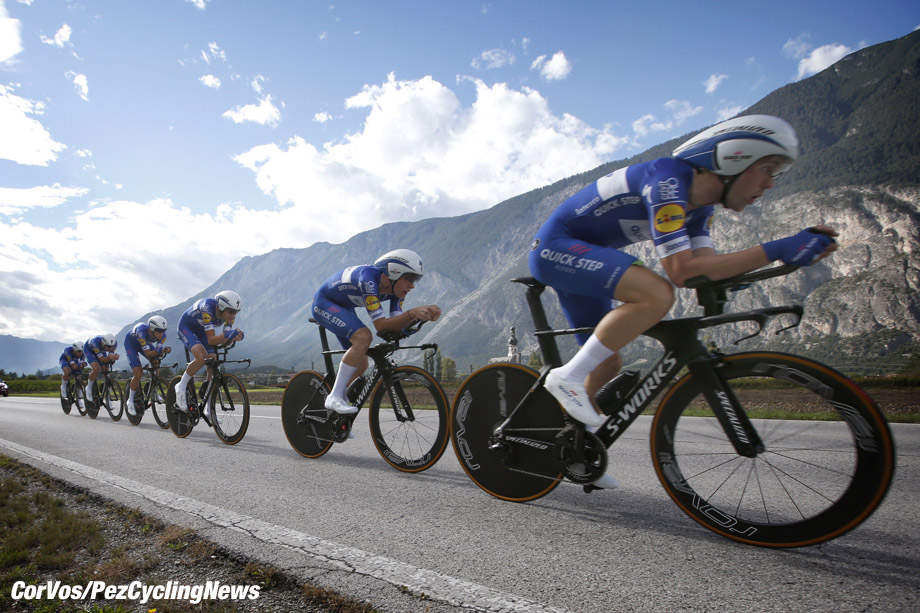 On a beautiful day in the beautiful Austrian Tyrol, Patrick Lefevere’s Quick-Step Floors team delivered a beautiful fourth win in the World Team Time Trial Championship. Intermediate times meant nothing as the Belgian team proved fastest and mentally strongest when the chips were down in the super-fast finale.
‘Full, full, full gas,’ as Yves Lampaert described it.

Despite Tom Dumoulin riding like a man possessed for reigning champions Sunweb, the Dutch squad had to settle for silver. BMC, also previous champions finished in bronze medal position with GVA gasping like a stranded fish at the line. Team Sky took fourth whilst Mitchelton-Scott flattered to deceive having started like rockets. 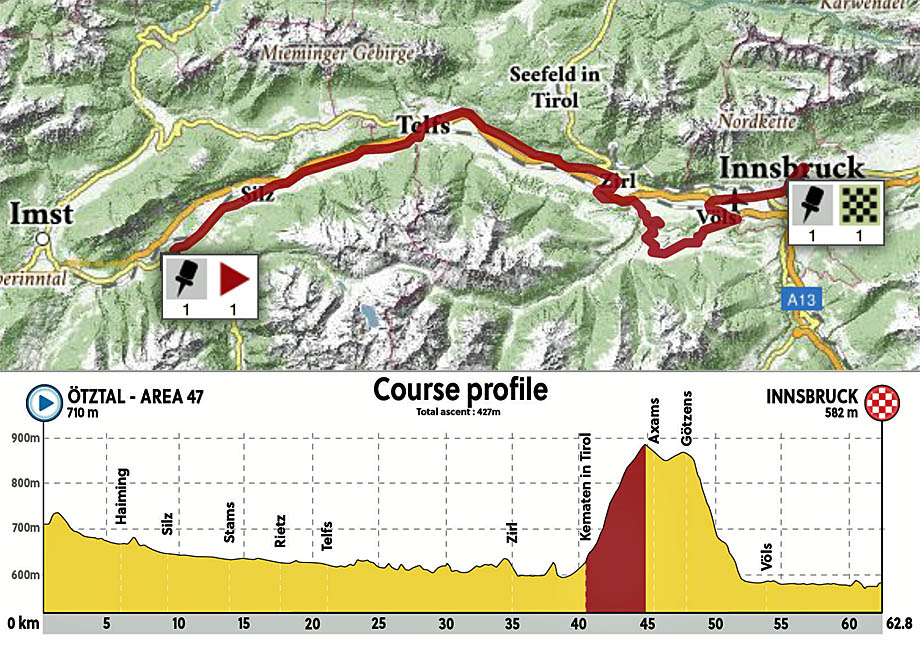 Tirol Cycling Team are off first to warm the tar, six to start, four to finish, a tricky course, 62.8 kilometres with plenty for the ‘drag artist’ – the first 40K are predominantly with gravity but there’s a whacking big ascent – the four kilometre climb in there from Kematen to Axams with a maximum gradient of 13% before a crazy fast finale. You need the ‘chronobeasts’ but how will their big frames cope with the climb? We’ll soon know. 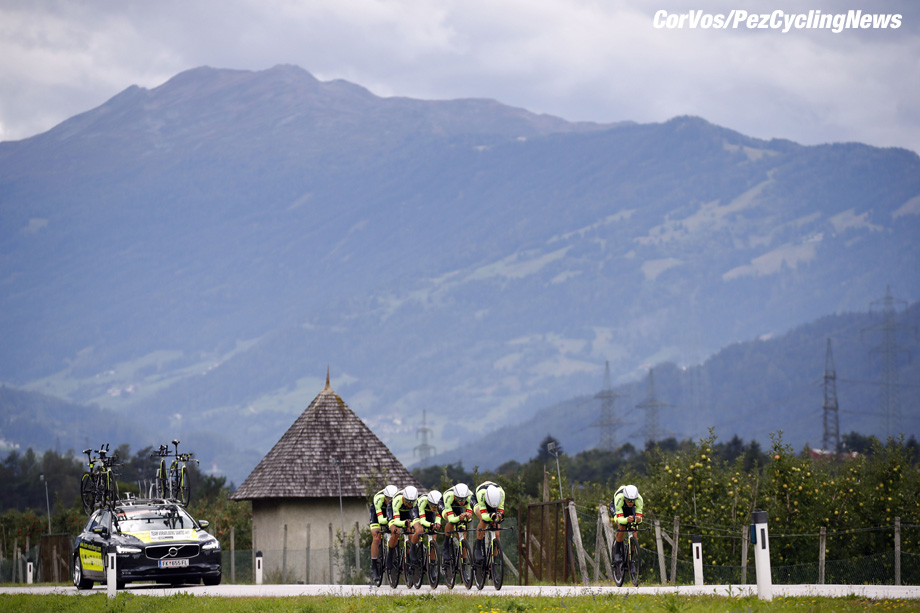 The local teams go off early with CCC the first of the ‘big guns’ to fire. Elkov-Author are the last of the continental teams to go. ProContinental CCC drop off the ramp, then WorldTour Katusha-Alpecin with chrono specialists Martin and Dowsett.

Tirol have averaged 56.6kph at check one – the WorldTour teams will be up towards 60, for sure. Trek-Segafredo next, then AG2R-La Mondiale, LottoNL-Jumbo, Astana. . .

Continental Voralberg outfit top 57 kph at check one. Elkov-Author now, topping 59 kph – wow! Movistar launch now with Mitchelton-Scott next; that’s a strong team with the likes of Meyer, Durbridge and Trentin. CCC can’t top Voralberg at check one. Bora-Hansgrohe now with Bodnar and Oss in there – both big engines. Katusha top 60 kph at check one – impressive. Quick-Step away now, The Masters, three times champions. Sky go after the Belgian flooring boys – I don’t think I agree with that seeding but it’s a strong team with Kwiato, Kiryienka and Castroviejo. AG2R-La Mondiale miss Katusha-Alpecin’s time at check one; the Russo-Swiss team looks very neat out there on the road. 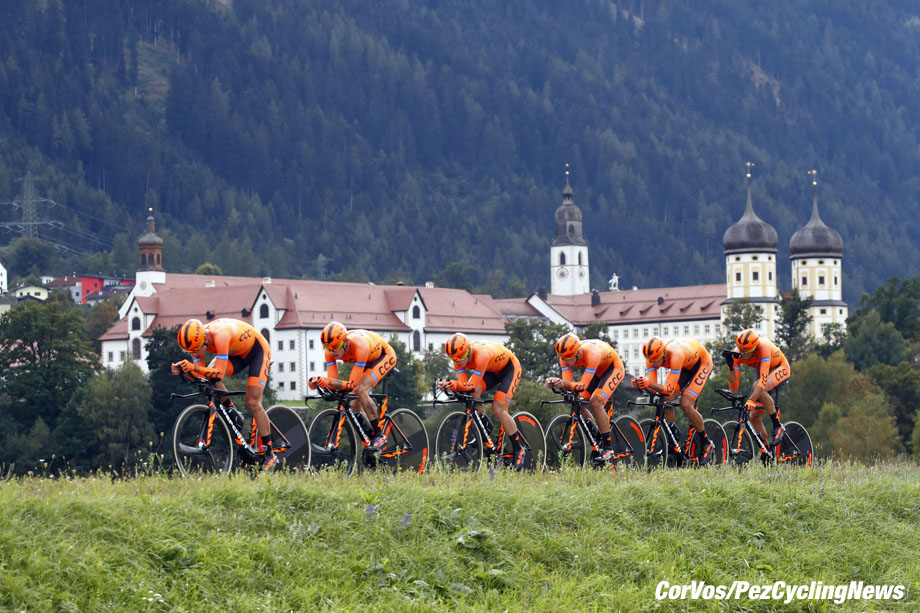 BMC on the ramp, former world champs; Kung, Dennis, GVA, Van Garderen. The reigning champions line up, Sunweb – with Dumoulin, Matthews, Kelderman – and that’s them all on the road. Movistar can’t best Katusha-Alpecin either but Mitchelton-Scott can as they top 61 kph and best Tony Martin’s squad by a near half minute. Voralberg are top at 44.8K as Roosen pops out of LottoNL.

Both Quick-Step and Sky both miss the Mitchelton-Scott mark at check one. BMC miss it too but go second.
Sunweb only fifth at check one – but there’s still that climb to come, a lot can change there. . . Voralberg go top at the line. 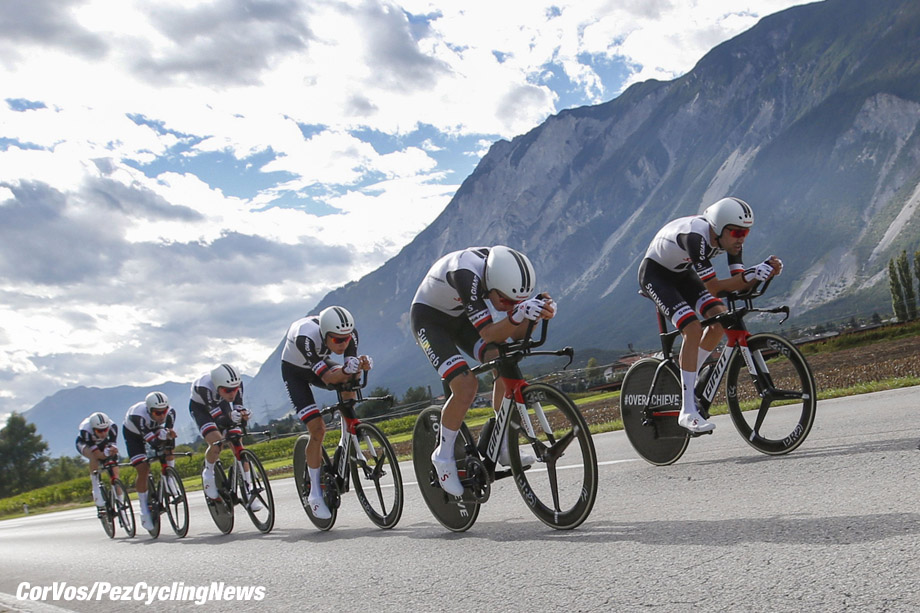 Mitchelton still have six on the climb and look good despite a wobble from Jack Bauer. Elkov-Author go top with big sprinter Kankovsy bringing them home. Movistar go top at check two but down to four. CCC now in the hot seat with a 53 kph average. Mitchelton-Scott now top at check two with five, Jack has gone. Katusha fail to usurp CCC at the line, that’s a surprise.

Trek top at the line, CCC out of the hot seats. Quick-Step down to five on the climb but very tidy – and they go top at check two by 30 seconds. Castroviejo takes Sky up the climb, down to five and 30 seconds off the Quick-Step pace. AG2R-La Mondiale drop three minutes at the line – ouch! LottoNL-Jumbo, nope. 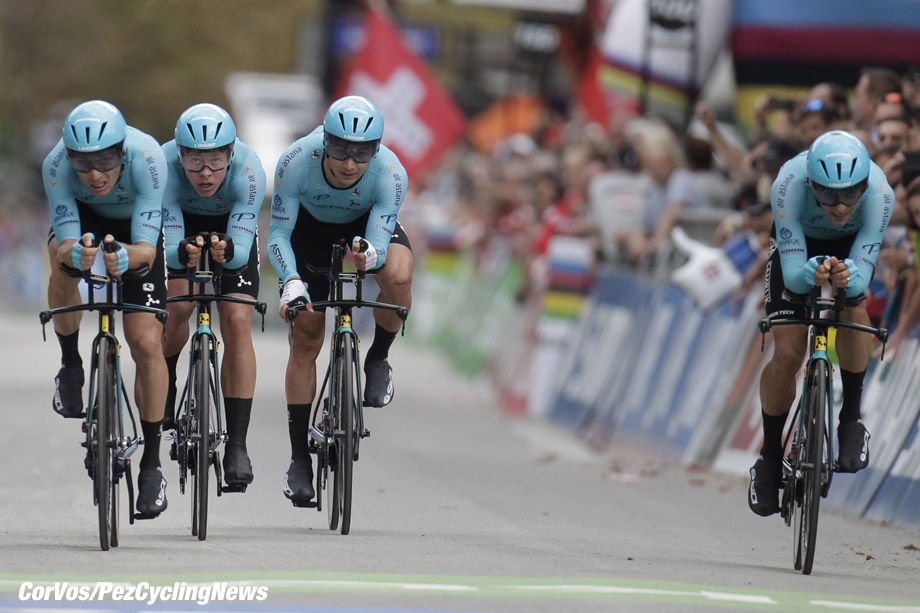 Quick-Step Floors clock 110 kph on the descent as Sunweb match them at check two. It’s a Sunweb/BMC/Quick-Step fight to the death as Movistar take the hot seats. Meyer pops out of Mitchelton but they still go top at the line by 35 seconds with a 54.8kph average. BMC and Quick-Step are on their way home now as Sunweb pass the 10K to go board. Bora, well out.

Quick-Step with five there sprint home, blanket finish, 56 seconds up on the Aussie team, 55.5kph. Meanwhile, heading into town Dumoulin drives hard for Sunweb, they have the advantage of time checks. Sky go second, ahead of Mitchelton. BMC – No! They go second, Quick-Step still top. 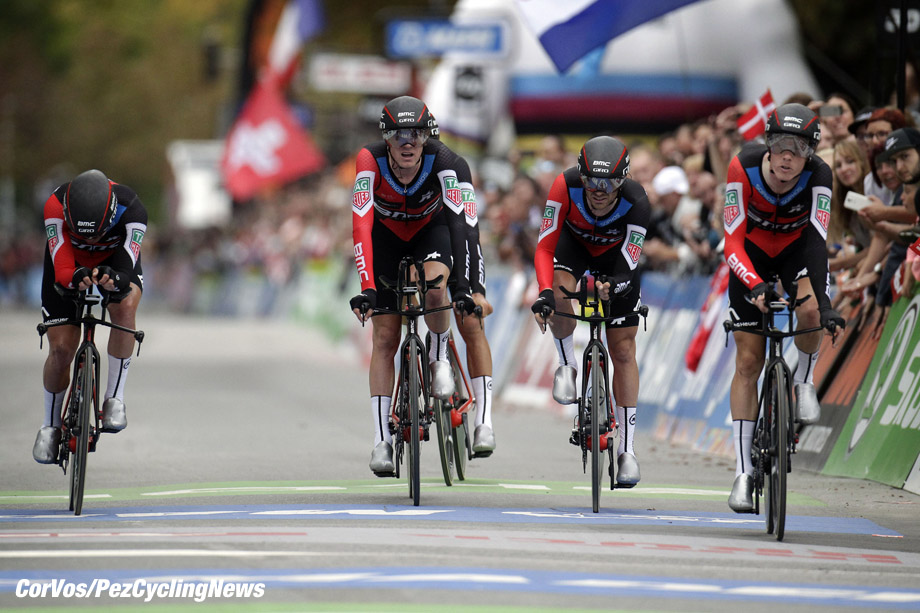 Just Sunweb to come now. Dumoulin again for Sunweb, is it enough? Team mate Matthews turns himself inside out in the finish straight but it’s not enough, not enough. Quick-Step by 18 seconds, as I said earlier – The Masters. And that’s win number 69 for 2018. 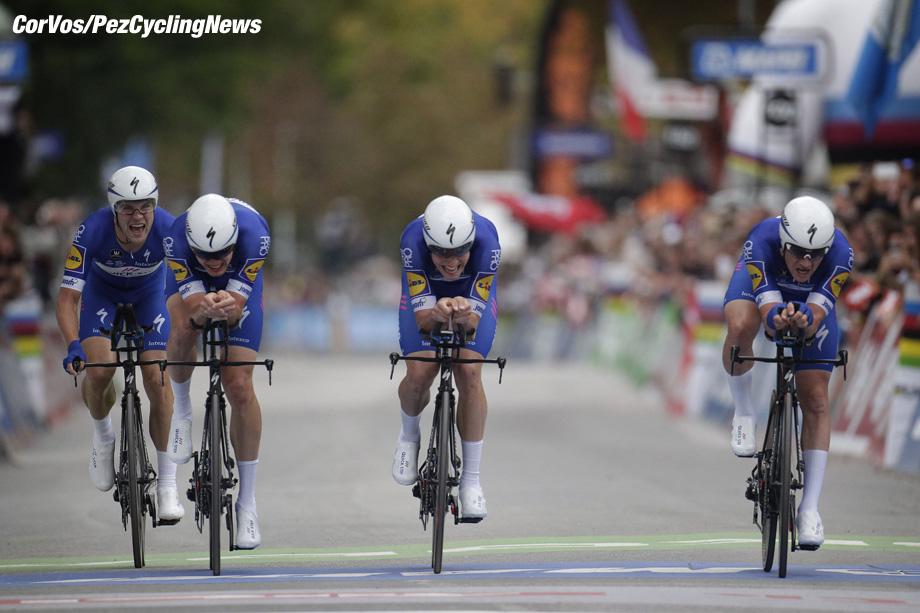 Such a shame it’s the last edition of this great event. 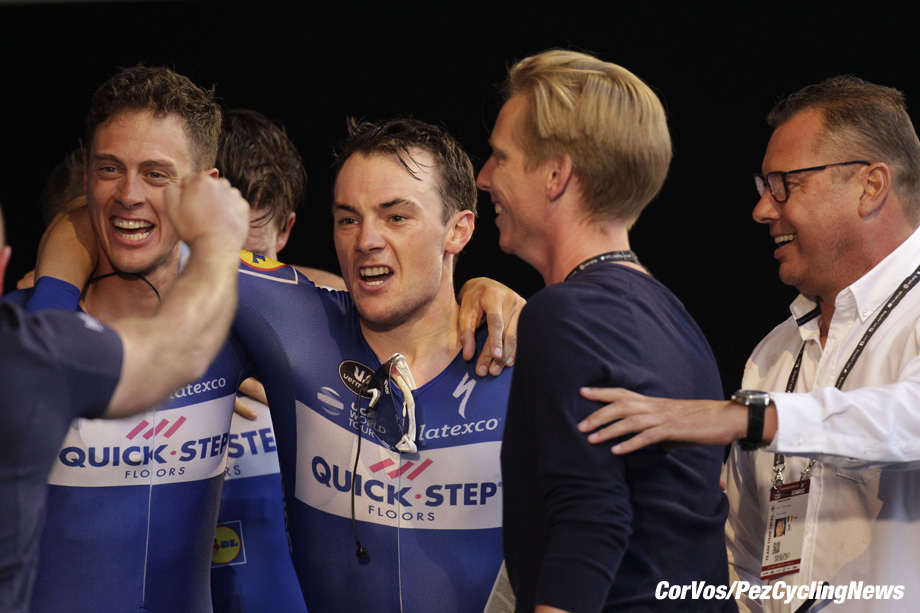 # Stay PEZ for all the news from Innsbruck. #