Dideriksen spoils Dutch birthday party
Amalie Dideriksen spoiled Kirsten Wild’s birthday party in the women’s Road Race at the UCI Road World Championships Doha 2016. The twenty-year-old Danish prodigy came from behind to edge out Wild on the line for the world title. Wild, who was perfectly piloted by the dominating Dutch train, seemed to be on her way to the title, but the line was just ten metres to far. Wild had to settle for silver and Finnish Lotta Lepisto took the bronze. 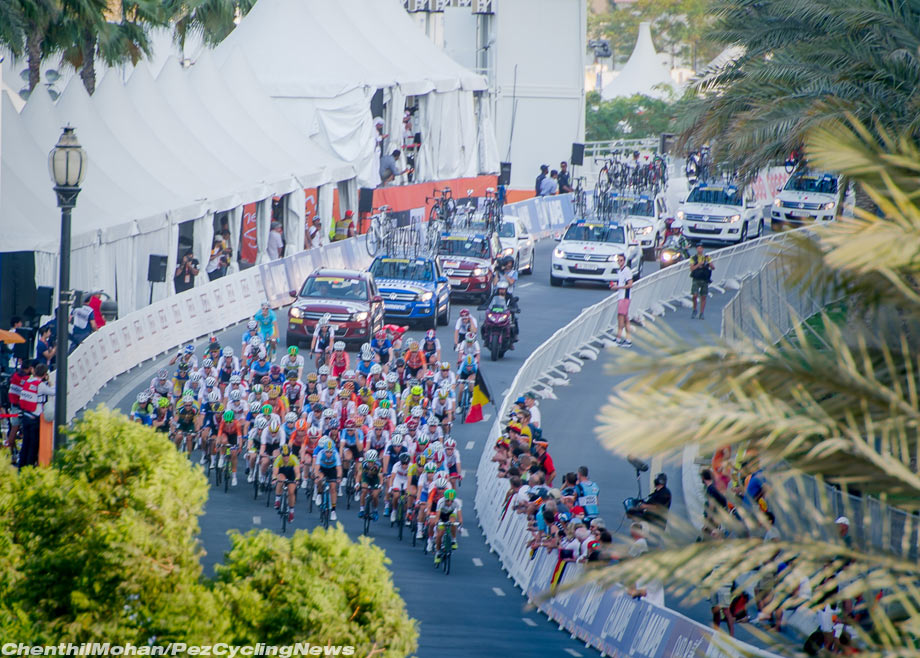 “It’s crazy,” Dideriksen said. “I had dreamed of a top-ten finish. My team mates fought so hard for me, I had a small crash and they brought me back.” Dideriksen already won the juniors world title twice and she is only the sixth woman to win the senior world Road Race title after also having won junior gold (France’s Catherien Marsal and Pauline Ferrand-Prévot, Lithuania’s Diana Žiliūtė, Briton Nicole Cooke and Dutchwoman Marianne Vos the other five). 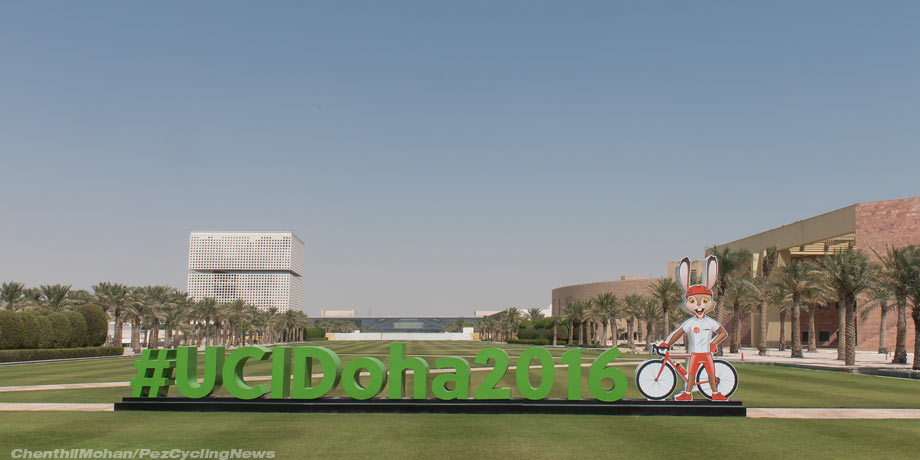 The Start line for today’s Women’s Elite Road Race was at the Qatar Foundation which houses premier educational institutions like Cornell, Texas University and many more. 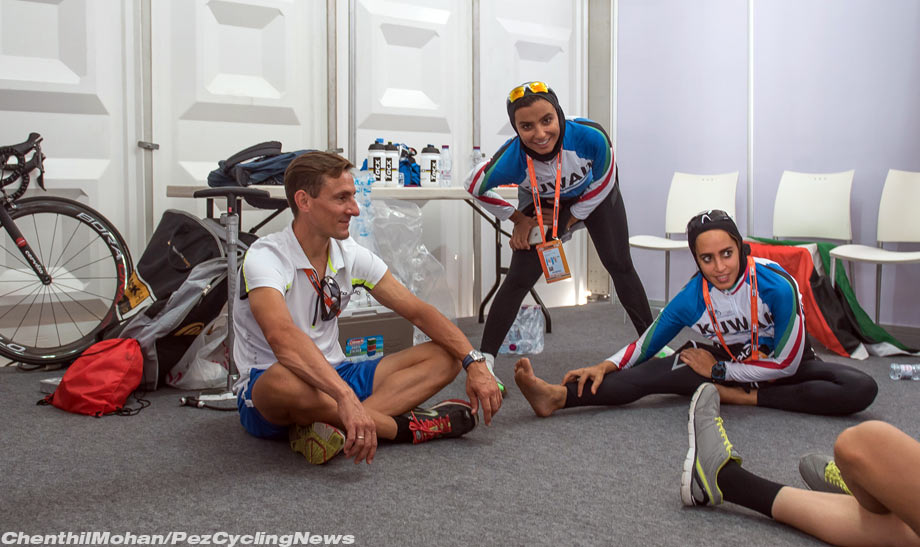 Final stretches for the Kuwaiti girls who lasted the first 15 minutes before getting spat out by the peloton. One of the team would crash in the early kms, and another member sat up to wait – both their days done. It’s hard to imagine how they could survive the heat with covered heads, long sleeves and legs.

Dideriksen took advantage of the Dutch train.
With three-time world champion Marianne Vos as lead-out women for Wild, the Orange women were the major force in the final five kilometres. “I knew the Dutch girls were going to lead out Kirsten Wild, and I wanted to be in that wheel so badly. It was a hard fight for that wheel with the other girls,” the newly minted world champion said. 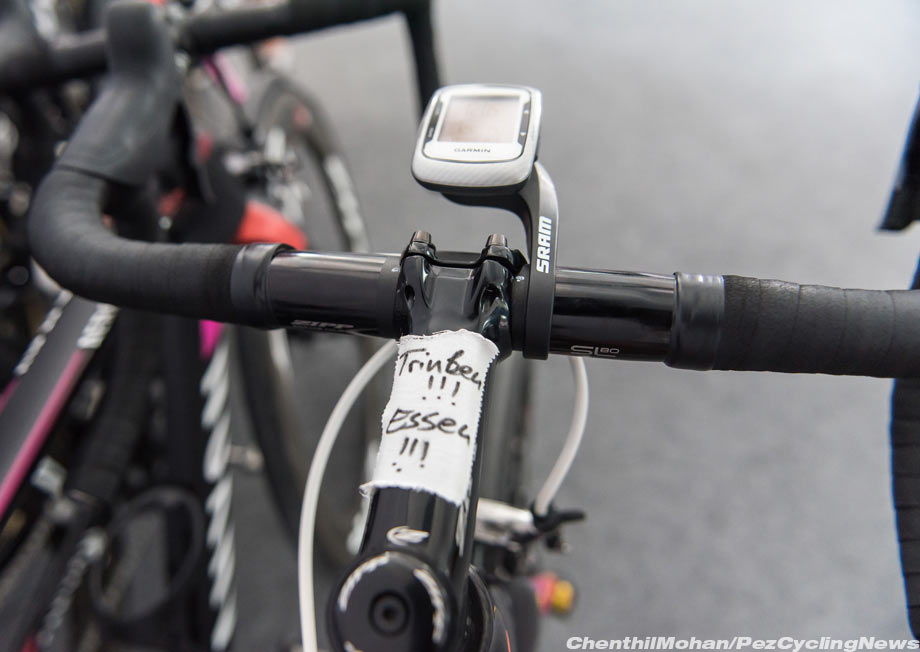 Lisa Brennauer’s bike which reads “EAT!! and DRINK!!” The mantra for the last week 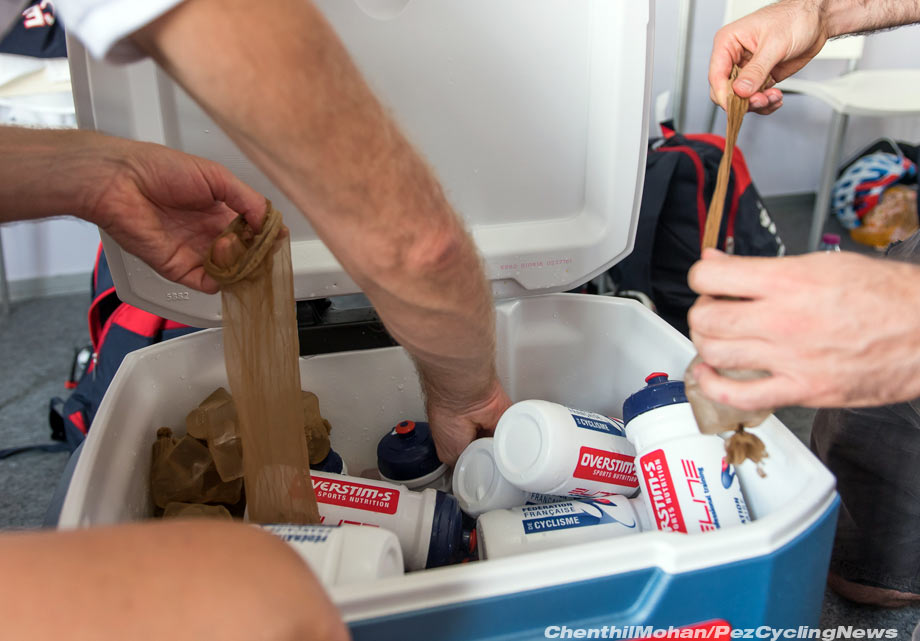 French Soigneurs prepping the ice socks and hydration for the start. 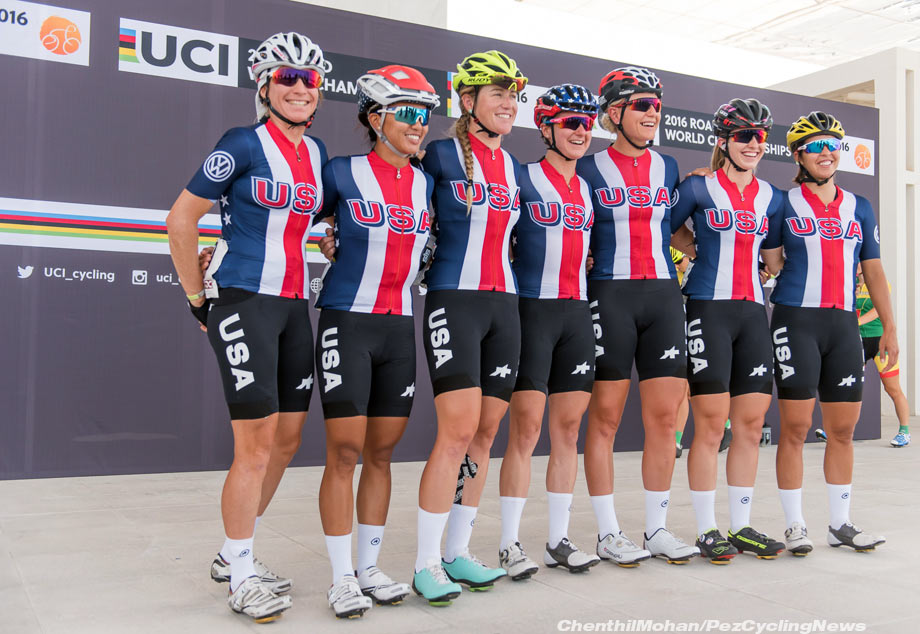 The American Team at the Team sign-in

Wild, record winner in the Ladies Tour of Qatar, went full pace when Vos gave way, but the sprint was just a little too long. “It would’ve been good if there were more breakaways. But I’m not really disappointed,” she explained and added that despite losing the gold medal, her birthday party will definitely occur: “t’s my birthday today and I’m going to have a party tonight.”

The surprise bronze medal for Lepisto, was the first ever senior podium place at the World Cycling Championships for Finland. “I knew I had to always stay in the front. My teammates, although they’re not the strongest riders around, stuck together. The national spirit was there for all to see,” said the proud Finn. 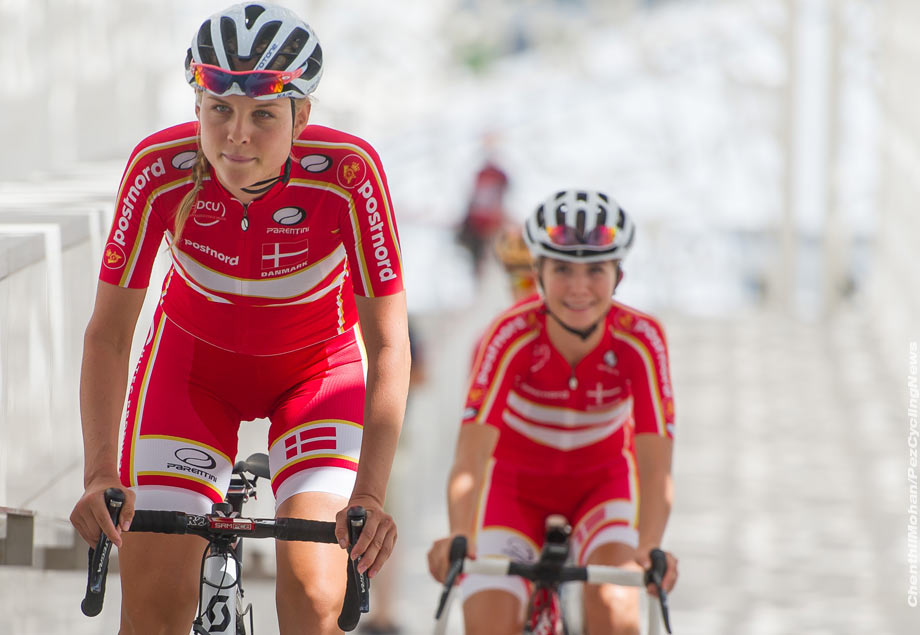 Julie Leth and Cecilie Uttrup roll in for the sign-on 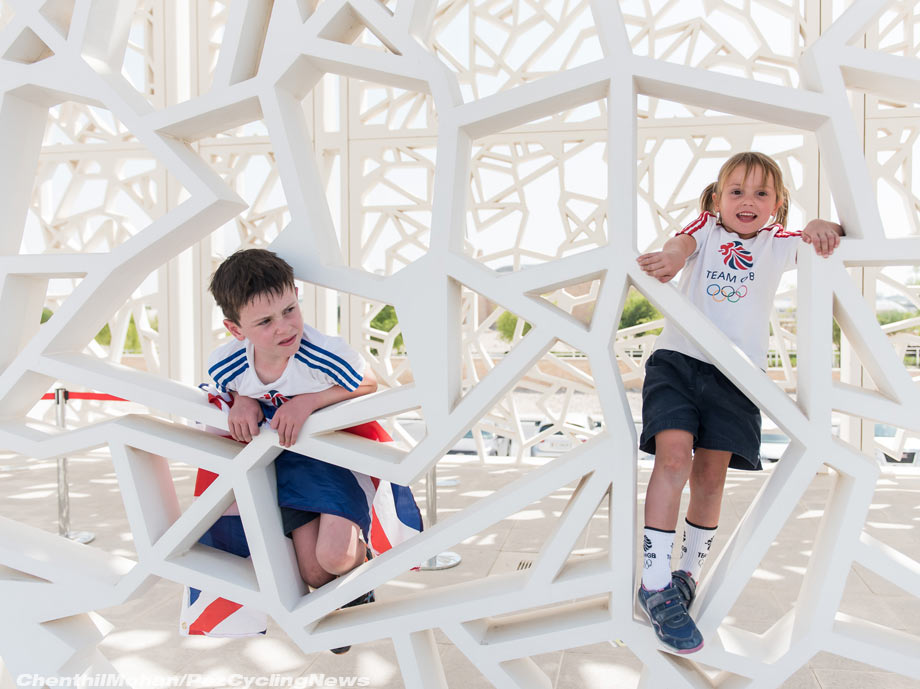 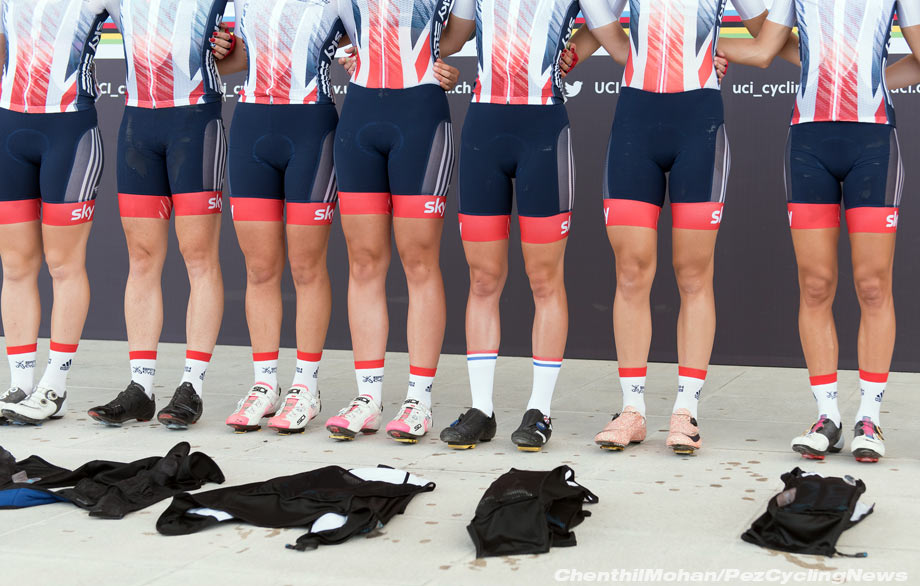 Chronology
Before the riders even left Qatar Foundation, the Italians have to cope with a serious setback, because two-time world champion and ace sprinter Giorgia Bronzini couldn’t start due to illness. Once the flag was dropped for the official start after a few kilometres of neutral zone, Japanese Eri Yonamine attacked. She quickly built a 25-second gap with the peloton watching her go. At the back of the bunch Noura Alameeri crashed at about the same time Yonamine attacked and the Kuwaiti seemed to have broken her collarbone. Her sister and only team mate Nada waited for her to get back on the bike, but both riders quit the race just after it had started. 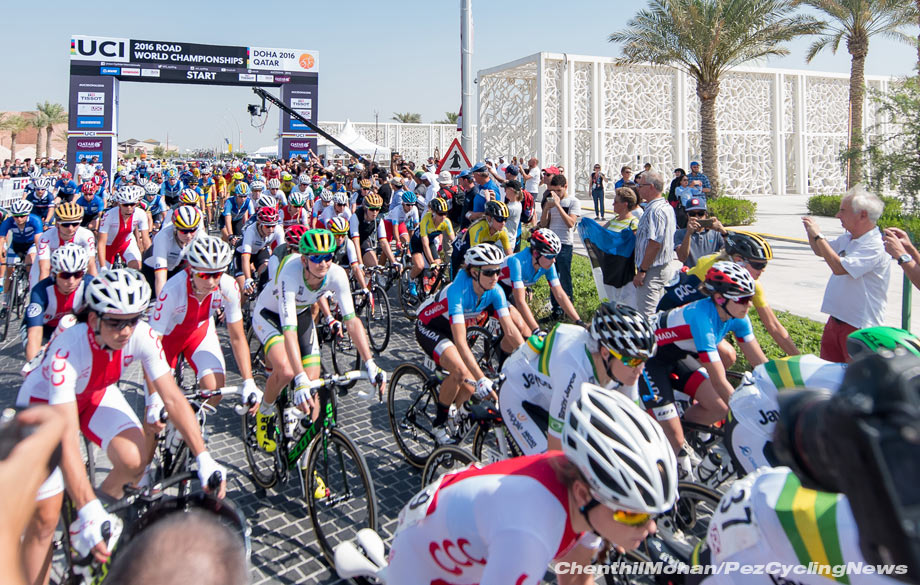 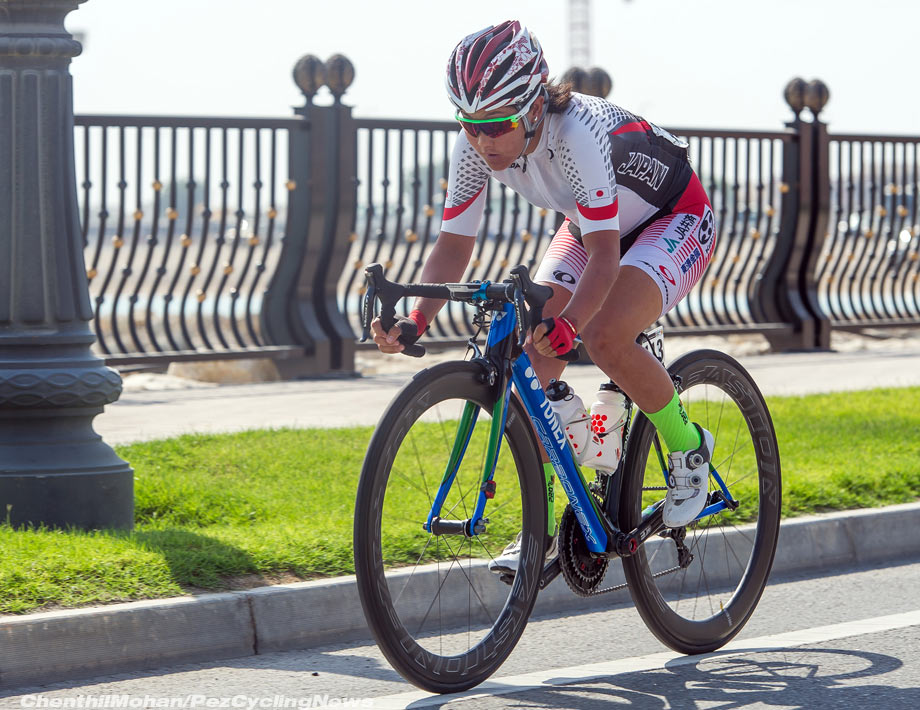 Japan’s Eri Monamine broke early before the peloton reached The Pearl. She held onto her slim lead for the first 2 laps of the race in The Pearl. 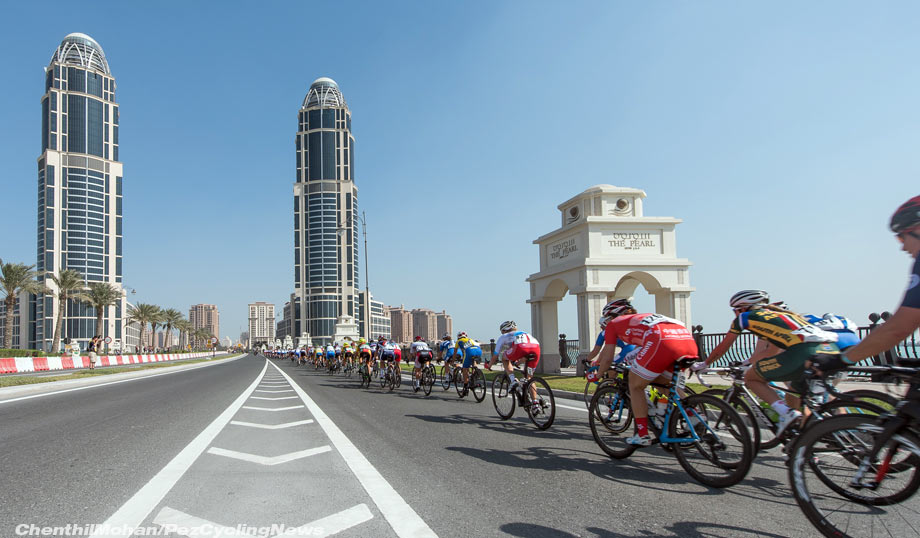 Japanese-Swiss couple
Amber Neben suffered a mechanical on the way from Qatar Foundation to the Pearl, but she quickly returned to the peloton. Yonamine entered the 15.2 kilometre Pearl Circuit first and had a 35-second lead with seven laps to go at the first passage of the finish line. With the British and the Belgians up front, the peloton got nearer to Yonamine and when the gap was diminished to a mere twenty seconds, Swiss Nicole Hanselmann decided to jump after the Japanese national champion. She caught up and the two of them stayed ahead for more than a full lap. 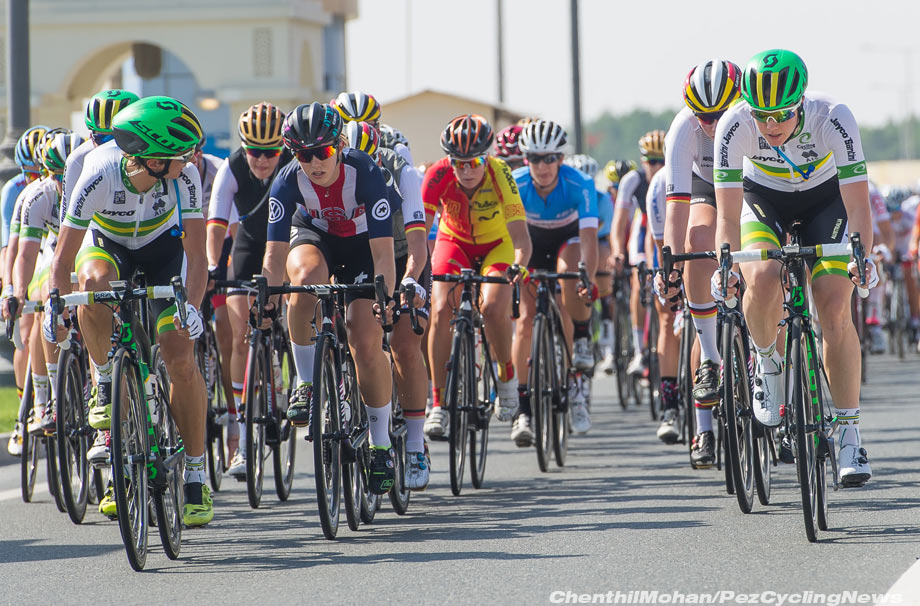 The initial pace setting was by the Australian engine 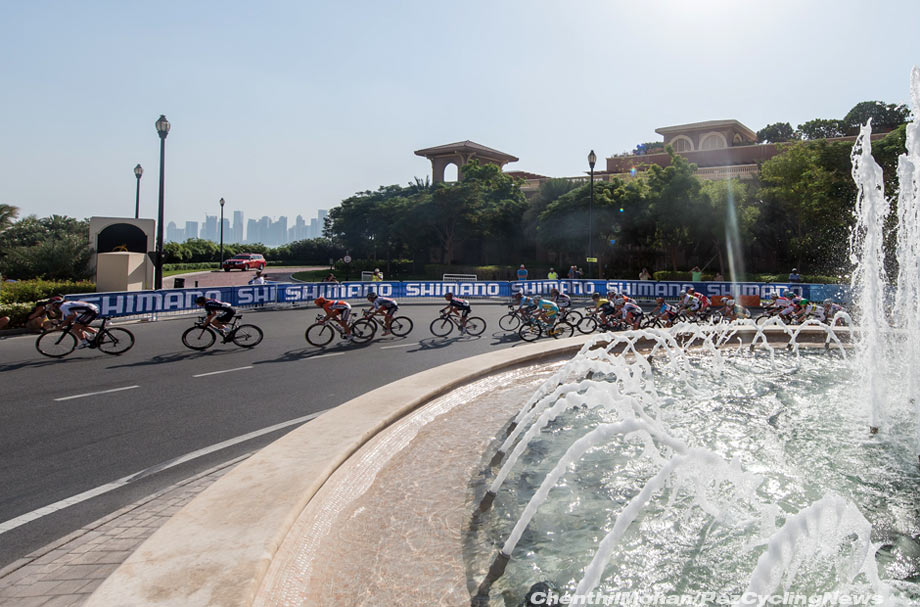 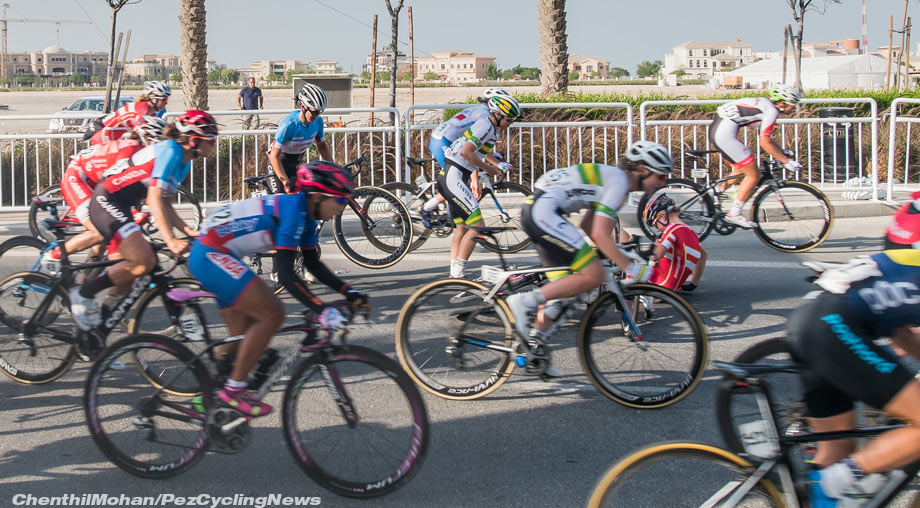 Dutch storm
Pre-race favourite Kirsten Wild suffered a crash at a roundabout in the first full lap, but she was brought back to the bunch by team mate Roxane Knetemann. With the Dutch ladies extremely active in the front of the bunch, the two leaders were caught with about five laps to go. Amy Pieters, Ellen van Dijk, Annemiek van Vleuten and three-time world champion Marianne Vos attacked one after each other with mainly the Americans neutralising their attempts. 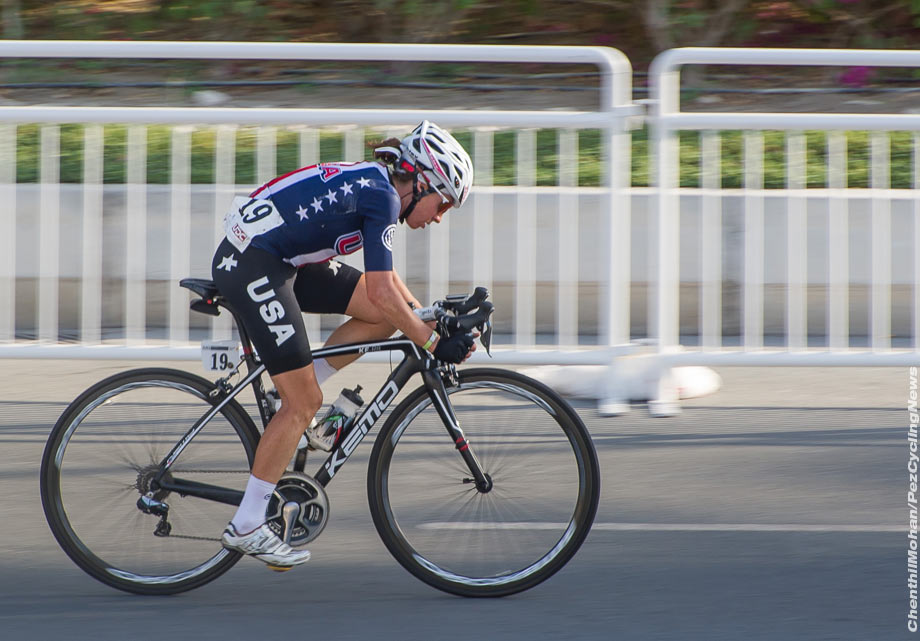 Neben solo
When the Dutch tornado faded, Amber Neben took advantage. The fresh Individual Time Trial World Champion escaped from the bunch and quickly built a 50-second gap. Great Britain, with defending champion Lizzie Deignan and Australia, in service of sprinting ace Chloe Hosking, led most of the chase with Dutch and German help. Neben got caught with only one lap to go. She eventually finished 98th. 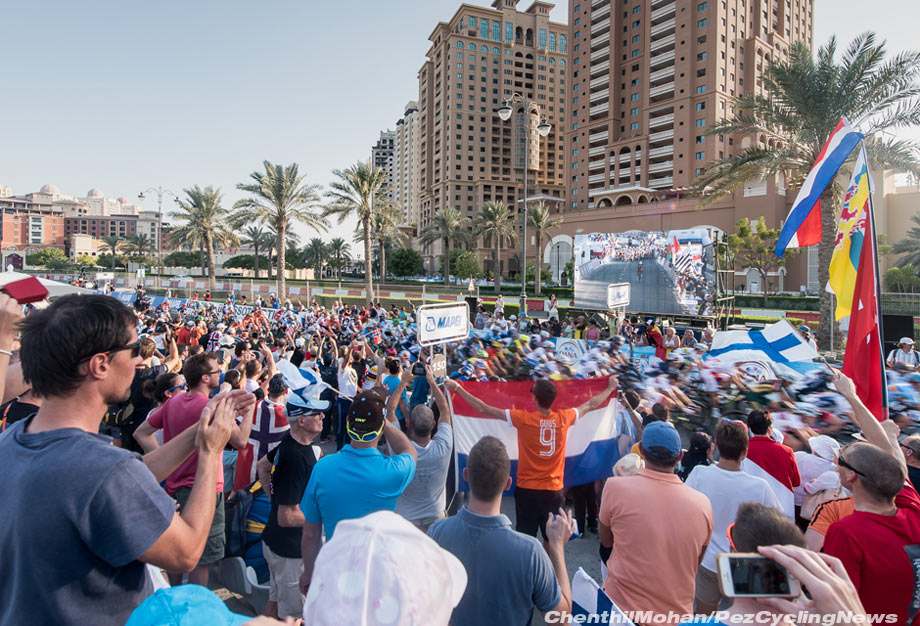 Largest turn out of fans in the entire week, watching the peloton whizz past them 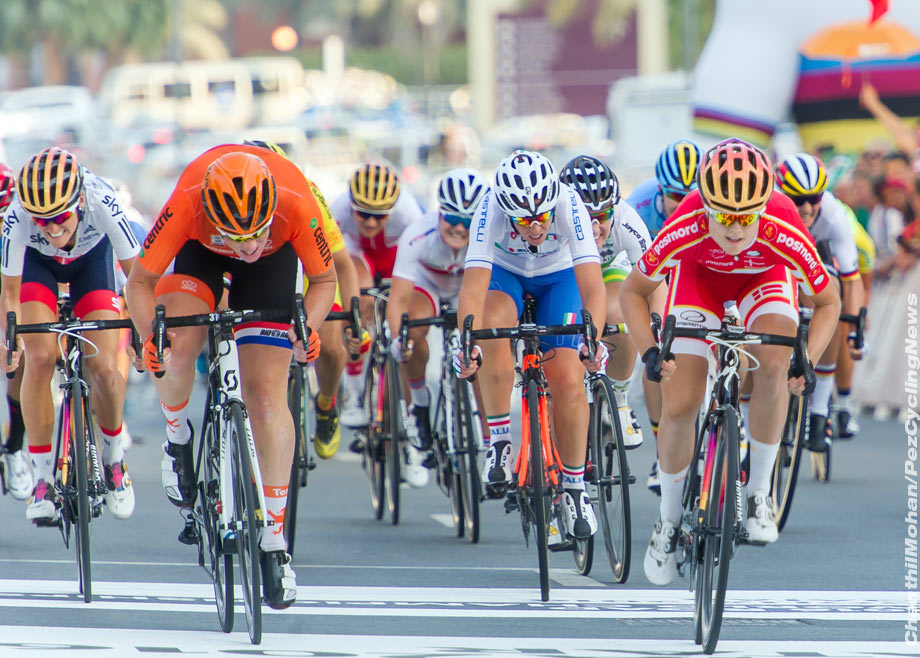 Amalie Dideriksen stuck to the fast wheel of Kirsten Wild and pipped her to the line.

The Dutch gathered to organise the sprint for Kirsten Wild. Great Britain and Canada tried to set up their own trains, but the Dutch would not have it any other way. with Annemiek van Vleuten, Olympic Champion Anna van der Breggen and three-fold world champion Marianne Vos, Kirsten Wild had the best lead-out one could ever dream of, but the Dutch train had a stowaway wagon with Dideriksen behind them, and she ran away with the title in the end 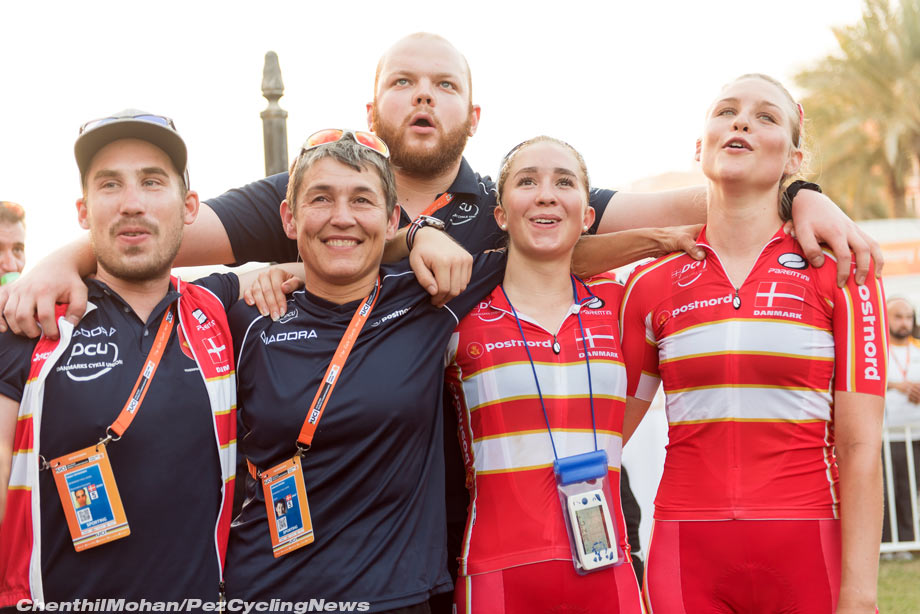 The Danish team at the Medal Ceremony 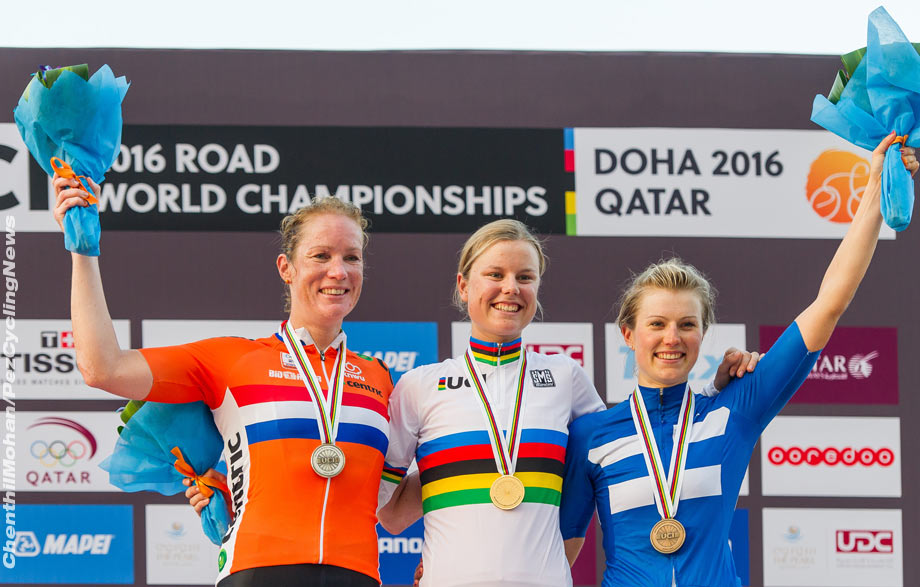 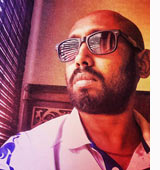 An avid cycling enthusiast himself, Chenthil is a photographer based in Bangalore, India. Amongst many other hats, he runs a photography collective called Sports Anonymous (https://www.instagram.com/sports_anonymous/) covering under represented sports in Asia.