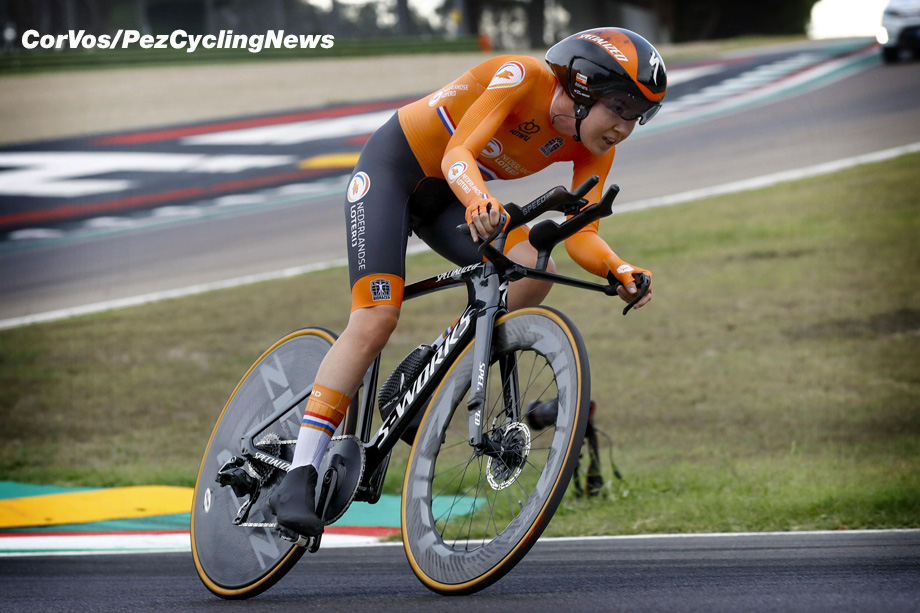 In this modified edition of the UCI World Championships, the women’s time trial was the first race of the World Championship Week. With Annemiek van Vleuten (who will participate in the road race on Saturday), one of the top favourites was missing, but with defending champion Chloé Dygert, Anna van der Breggen and Ellen van Dijk, there were three big contenders for gold in Imola. 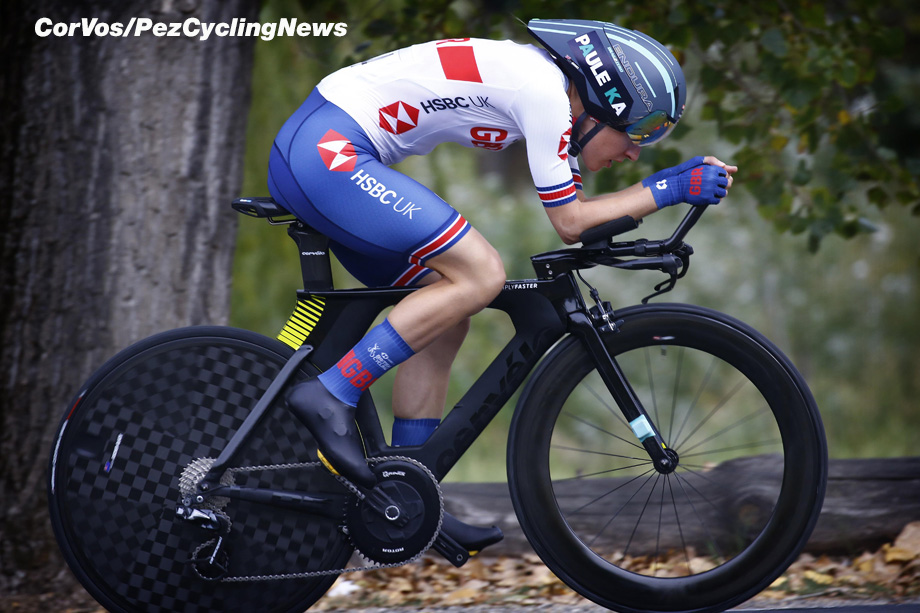 Amber Joseph was the first rider to start the time trial at 2:40pm, but the Barbadian certainly didn’t set the world on fire. Valeriya Kononenko, Mikayla Harvey and Elizabeth Banks were looked on as the top early riders. They turned out to be fast at the first intermediate point after 15 kilometres, but the big guns were still to fire. 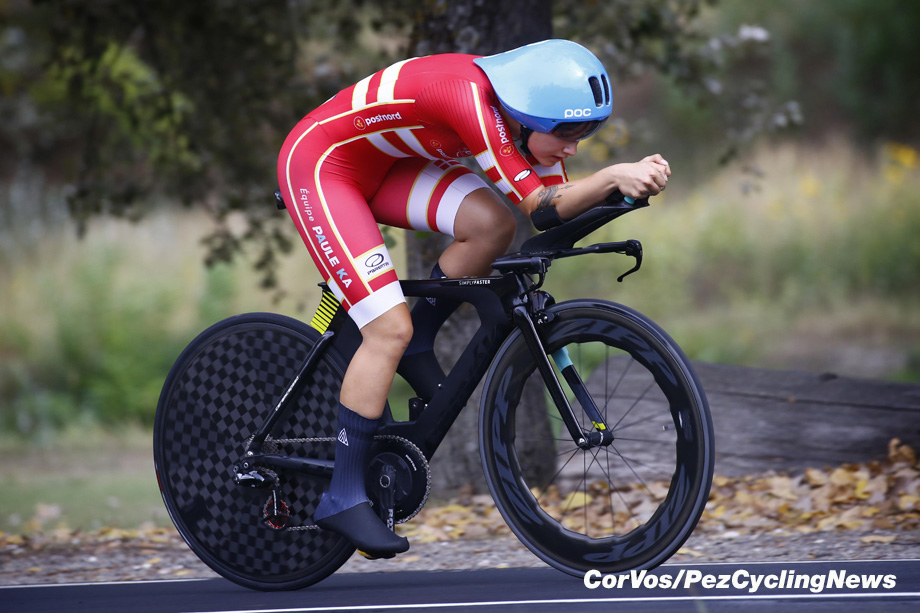 Norsgaard was an early leader

Banks came through after 21:37 for the fastest first check-point time, but the Dane, Emma Norsgaard, was 16 seconds faster than Banks with 21:21. Norsgaard continued her pace and managed to clock the fastest time after 19.7 kilometres. The Paule Ka team rider managed to finish in 41:42 to sit on the hot-seat. 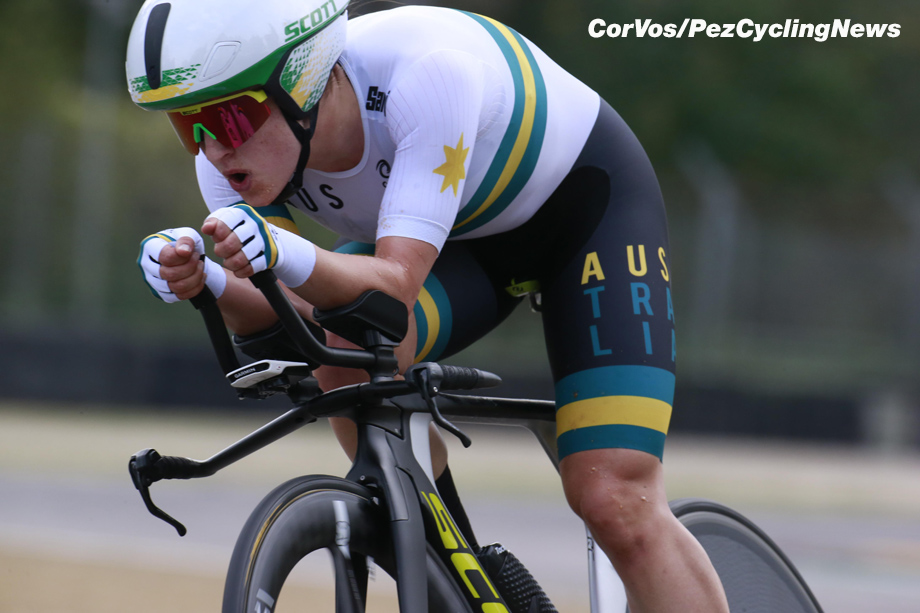 But Norsgaard knew that the top girls still had to finish. First we had to look out for the finish times of Lauren Stephens (winner of the Tour de l’Ardèche) and Grace Brown. Both ladies rode an excellent time trial and turned out to be a lot faster than Norsgaard at the intermediate point. 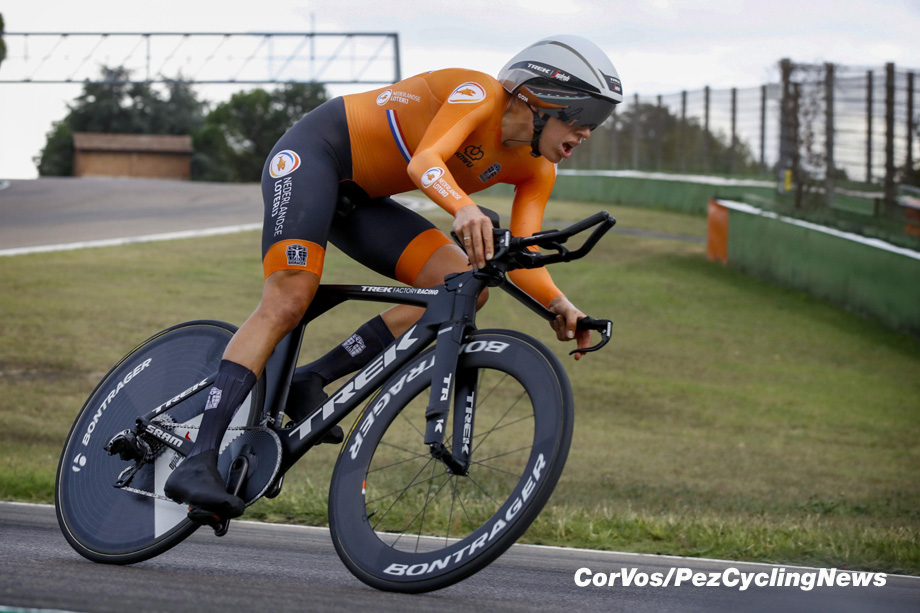 Stephens managed to go 15 seconds below Norsgaard’s time, Brown (20:35) turned out to be half a minute faster again. The latter turned out to have set a very good target time after 15 kilometres. Van Dijk was a second slower and two-time World champion Amber Neben had to concede 13 seconds to Brown. 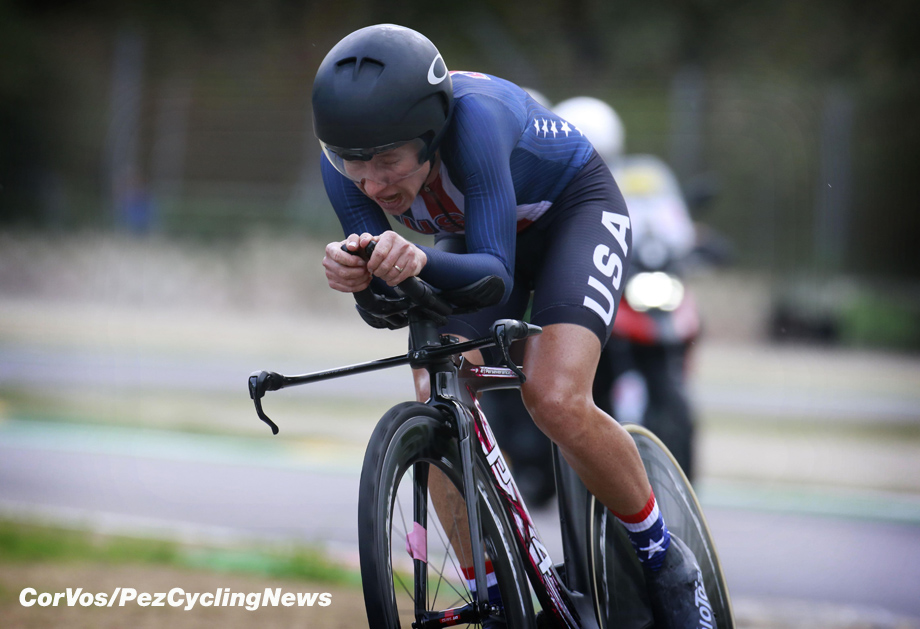 The difference between Brown, Van Dijk and Neben was not surmountable, but there were more top riders to come. Lisa Brennauer, the world champion of Ponferrada was looking good. The strong German managed to live up to her semi-favourite status by going 6 seconds under Brown’s time. However, Brennauer’s time turned out not to be just fast enough, because the Marlen Reusser set the bar particularly high for Van der Breggen and Dygert, who still had to pass the intermediate point. Reusser clocked 20:02 and was 28 seconds faster than Brennauer. Van der Breggen was at 10 seconds, and Reusser was looking good. 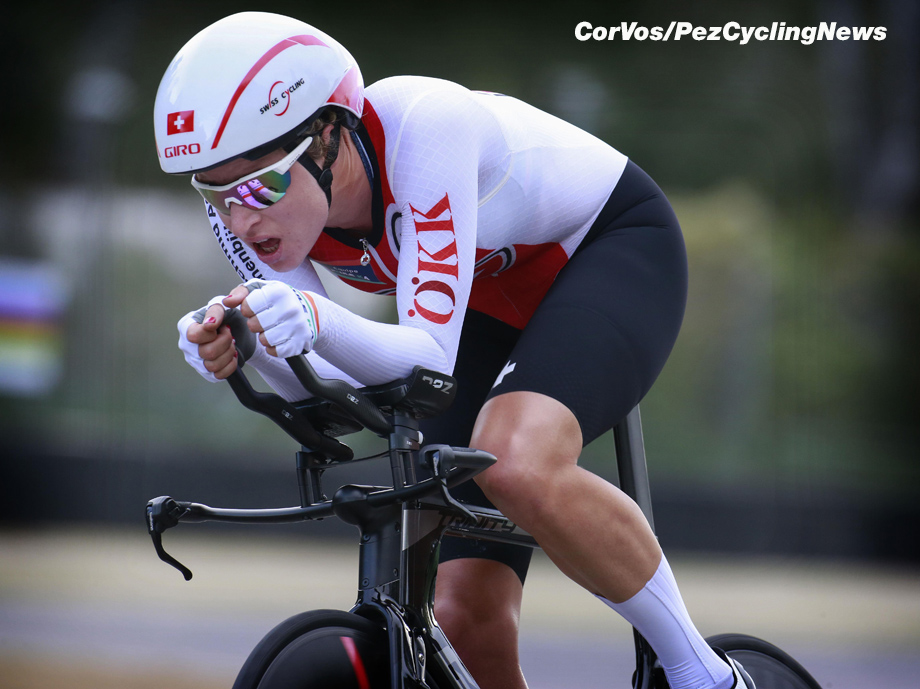 Marlen Reusser was well ahead… 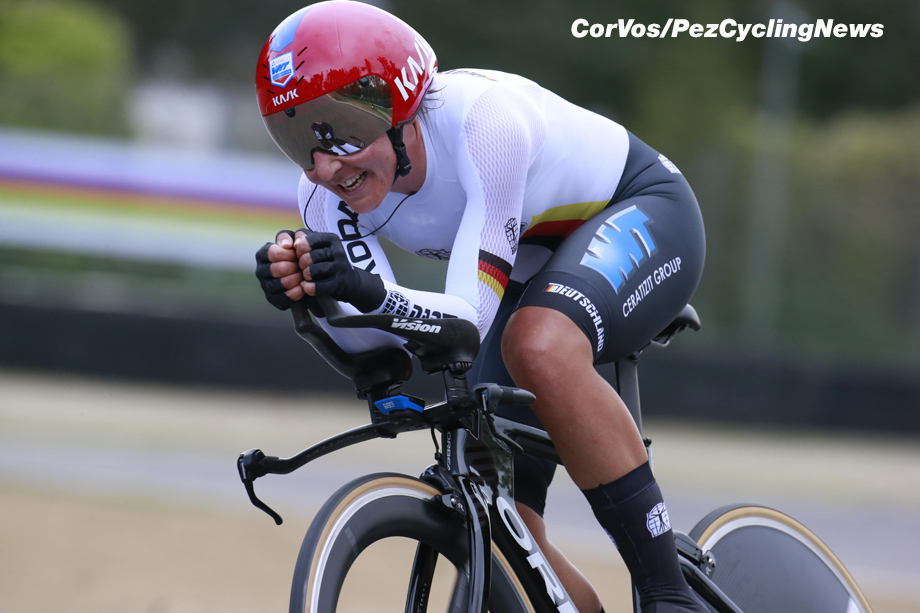 Dygert left her competitors behind after 15 kilometres. The American was another 27 seconds faster than Reusser and seemed on her way to a second World title in a row. Not much later things went terribly wrong for Dygert, who lost control of her bike on a short descent and flew over the crash barrier at high speed. 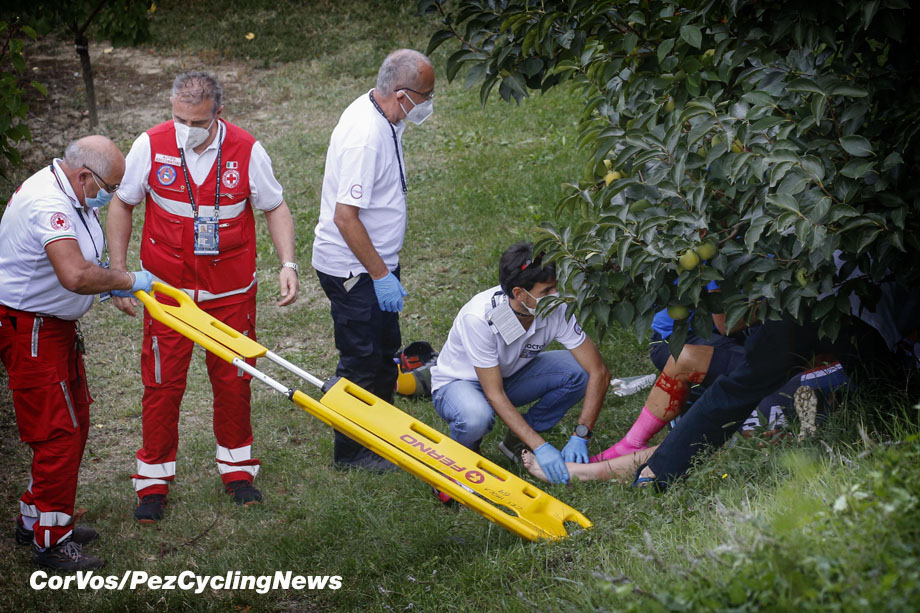 Dygert, who couldn’t ride on, lost her World title at that point. Now that the American was eliminated, everyone was looking to Reusser, Van der Breggen, and also Van Dijk. The latter had lost a lot of time at the first intermediate point, but finished with a very good time. Brown and Brennauer slowed to finish behind Van Dijk. 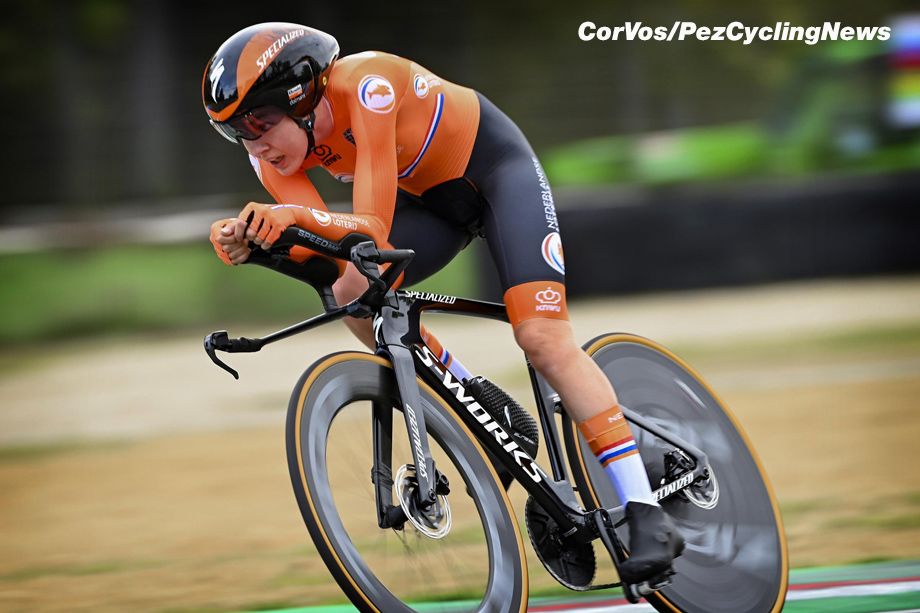 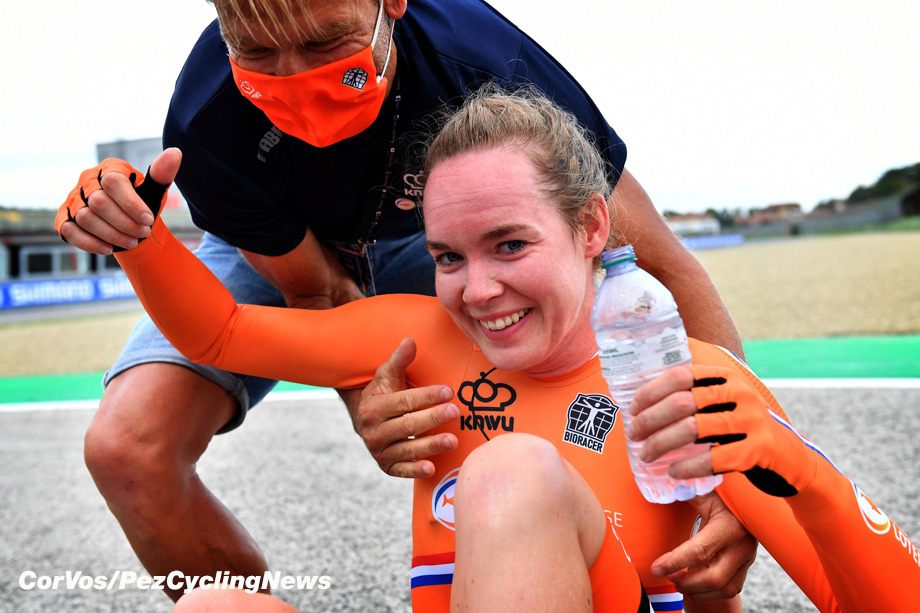 The World champion of Firenze, Van Dijk, could dream of a new World title, but the strong Reusser managed to hold her own towards the finish and went 16 seconds below the time of Van Dijk. The rainbow jersey still went to a Dutchwoman, as Van der Breggen managed a time of 40:20 and that turned out to be the winning time. Reusser had to admit defeat by 15 seconds, Van Dijk was at half a minute. 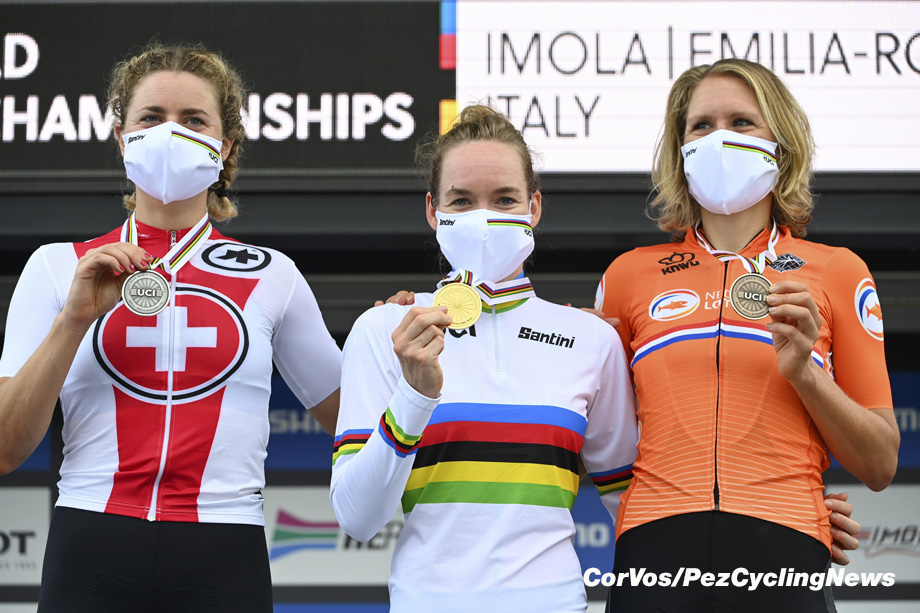 The first Worlds podium of 2020

# Stay PEZ for all the World road Championships. #