Worlds Race Report: After Sunday’s mixed team time trial relay. The 2019 World road championships have moved on to the induvidual tests against the clock. Monday sees the junior men and women tackle the induvidual time trials. Wins for Russia and Italy. 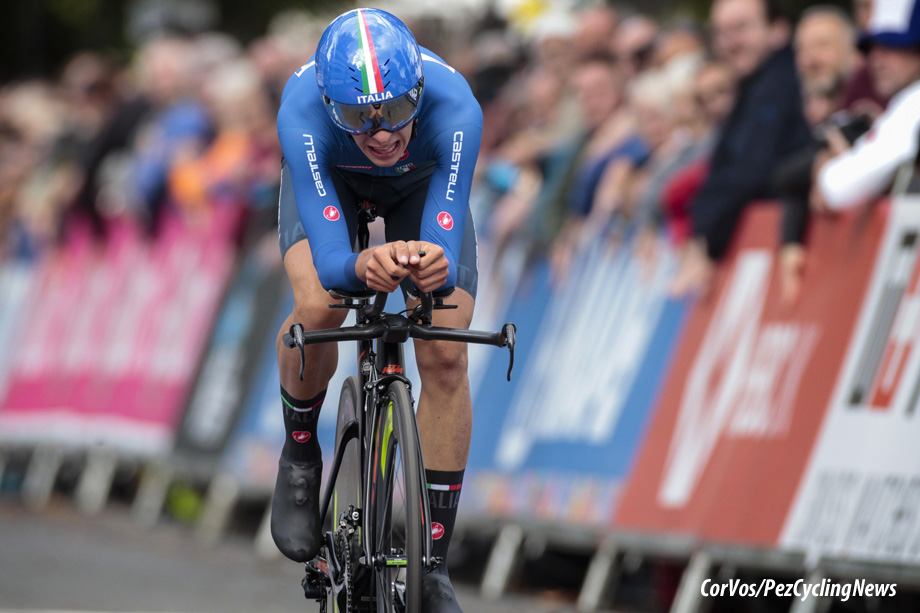 World’s Junior Men Time Trial Championship
Antonio Tiberi is the new junior men’s World time trial champion. The Italian had an equipment failure immediately after the start, but then rode a very strong time trial. The others couldn’t get close to the time of Tiberi. The silver medal went to the Dutchman Enzo Leijnse, the bronze medal for Marco Brenner of Germany. 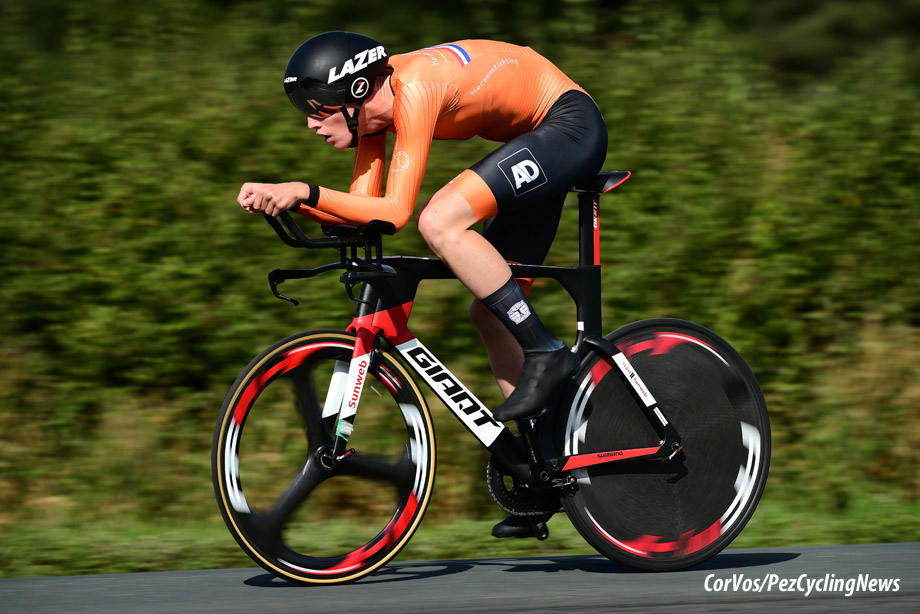 Leijnse and Brenner
The first serious fight for the hot seat was between Enzo Leijnse and Marco Brenner. The German was faster at the split times, but the Dutchman turned out to be better at the finish. Leijnse rode an excellent second lap and with a time of 38:36 was almost 5 seconds ahead of Brenner. 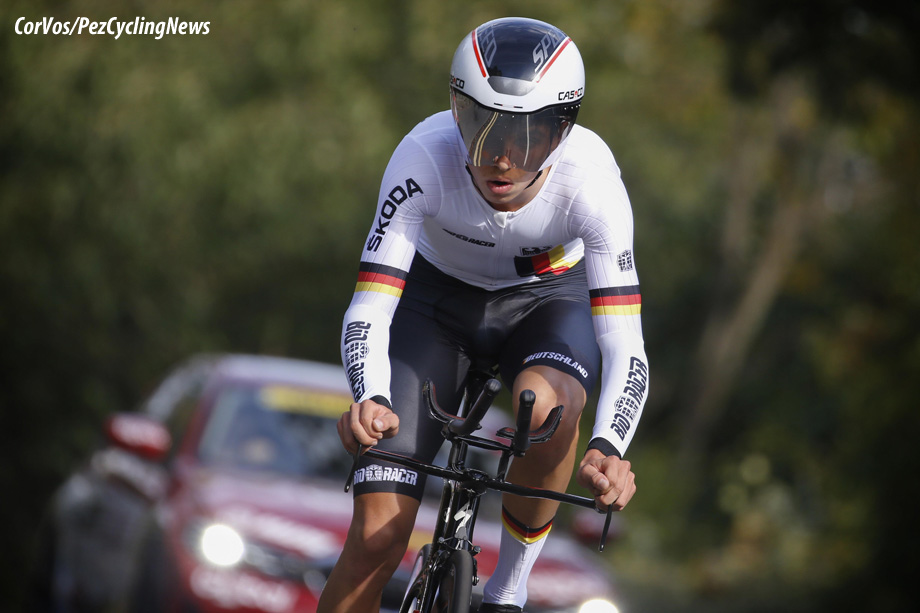 Bad luck Tiberi
The Italian Antonio Tiberi had a highly unfortunate start. He had a mechanical failure and after a bike change he had lost around 30 seconds. Tiberi turned out to do a super fast ride on his spare bike. At each intermediate point, he took back time on Leijnse and set the fastest time by 7 seconds. The two Belgians, Branko Huys and Lars Van Ryckeghem finished outside the top 10.

Favourites in the last block
Quinn Simmons set the fastest time at the first intermediate point, but Lars Boven, Michel Hessmann, Andrea Piccolo and Leo Hayter were not far behind. Halfway through, it became clear that only Simmons might beat Tiberi. 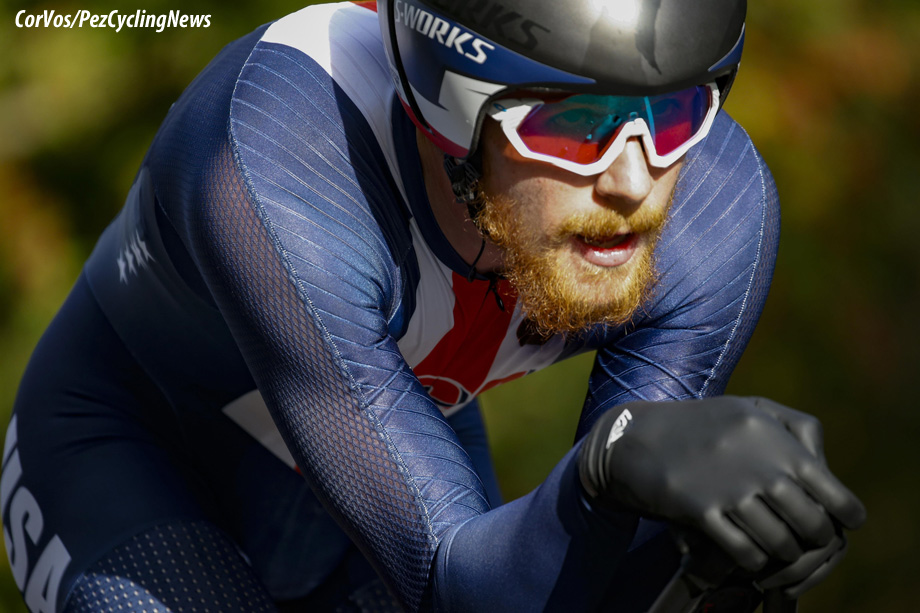 After his strong opening lap, the American could not hold his pace with the strong final lap of the Italian leader. Little by little, Simmons lost time, but kept the pressure on to the end. The American was slower than Tiberi, which was obvious well before entering the final kilometre. He ended up in 4th place.

The 18-year-old Italian Antonio Tiberi was, despite his unfortunate start, able to take the rainbow jersey on the stage in Harrogate after an impressive time trial. 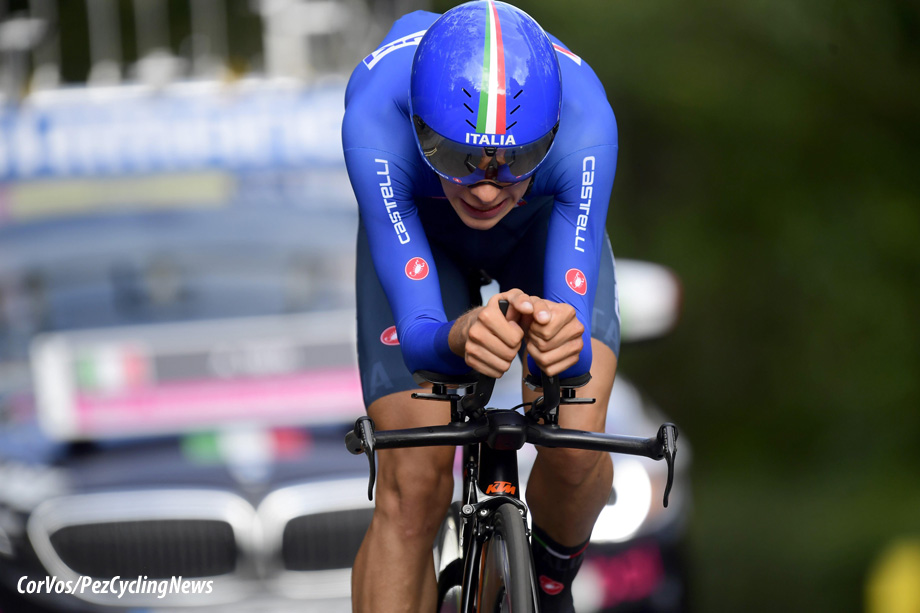 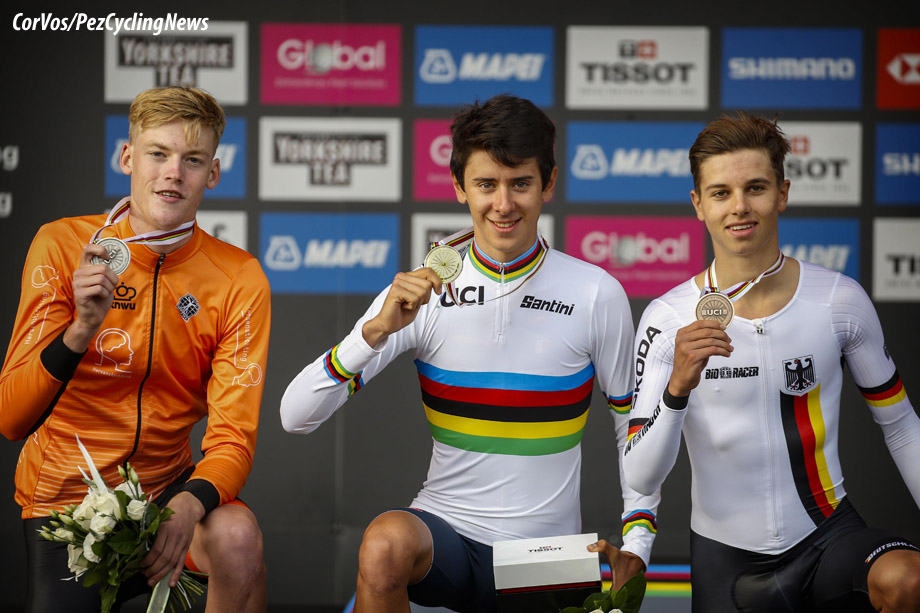 World’s Junior Women Time Trial Championship
Aigul Gareeva is the new women’s junior World time trial champion. Her win was not all plain sailing, because in the finalé she took the wrong turn. However, her lead was large enough to stay ahead of Shirin van Anrooij (Netherlands) and Elynor Bäckstedt (Great Britain). 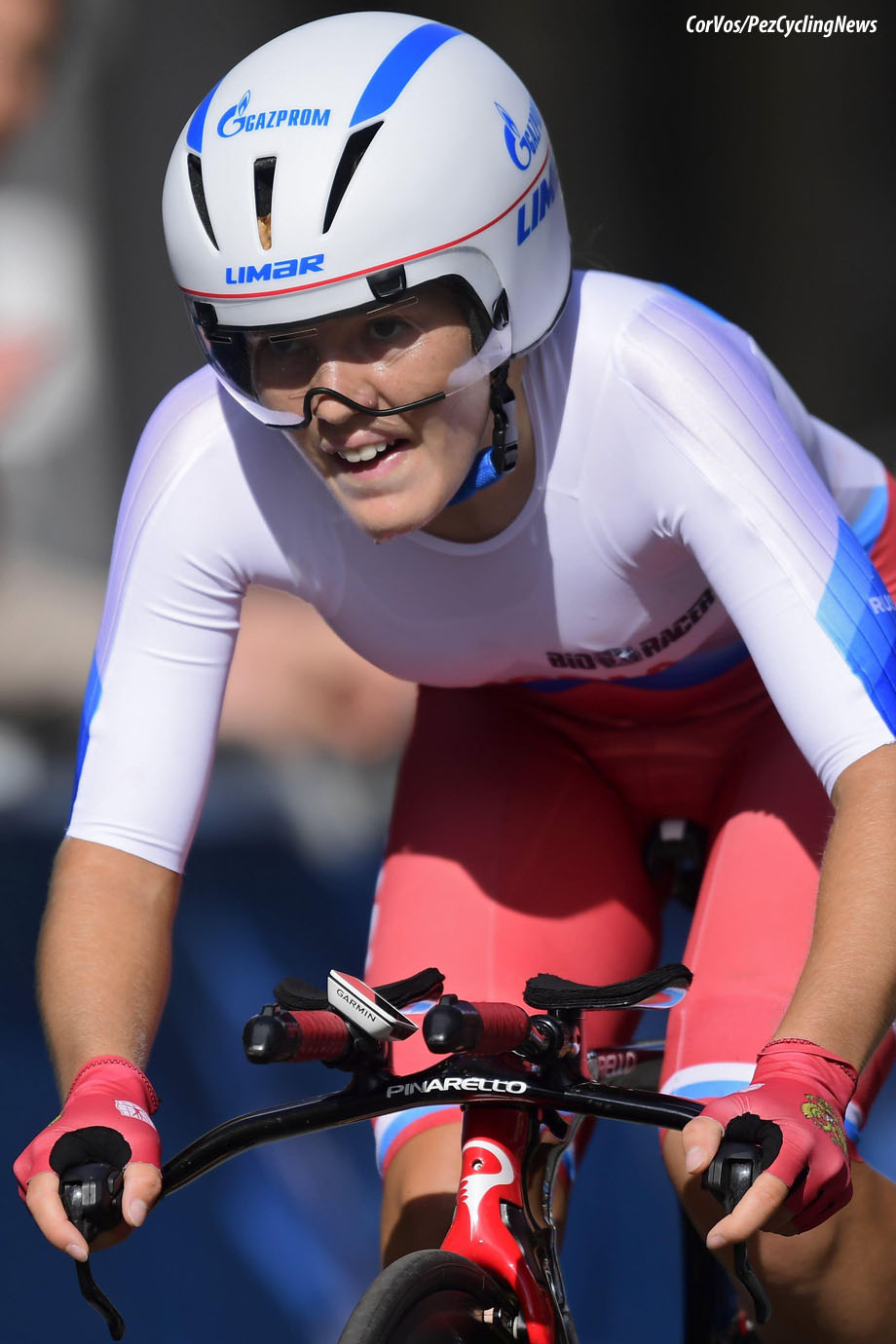 On the same course as the Team Mixed Relay, the Dutch girl, Femke Gerritse was the first to start. On damp roads, the 18-year-old rider stopped the clock at 24:05 after the 13.7 kilometres. Her fastest time didn’t last long, as the Frenchwoman, Lea Curinier, set the fastest time by more than half a minute. The American Megan Jastrab then went a step further by going yet another half a minute faster. 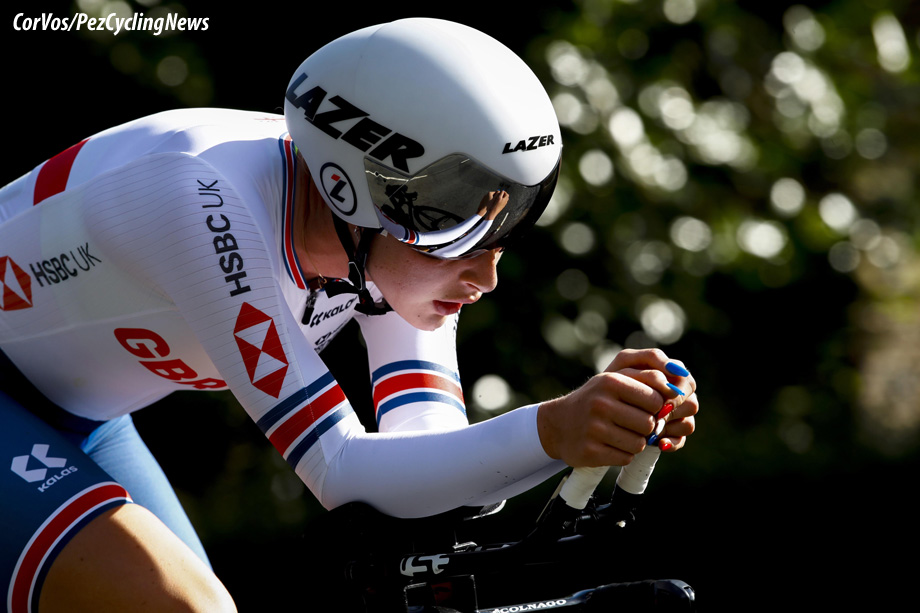 It was the Italian Sofia Collinelli, who led the race for a longer period. The sixth placed rider in the European Championship time trial in Alkmaar bettered Jastrab’s time by 9 seconds. Amelia Sharpe, Cedrine Kerbaol and Lara Gillespie fell short of her time. The second Dutchwoman, Leonie Bos, was 39 seconds slower that the Italian at the intermediate point after 6.3 kilometres, but at the finish she took the fastest time of 22:37.

Bos’ time top for a long time
The second placed rider in the Netherlands national time trial championships turned out to have ridden an excellent second part of the race and with that she moved on to the hot seat, knocking Collinelli off. Van Rensburg and Ruegg were also out on the course, but both the South African and the Swiss riders were short of Bos’s top time. 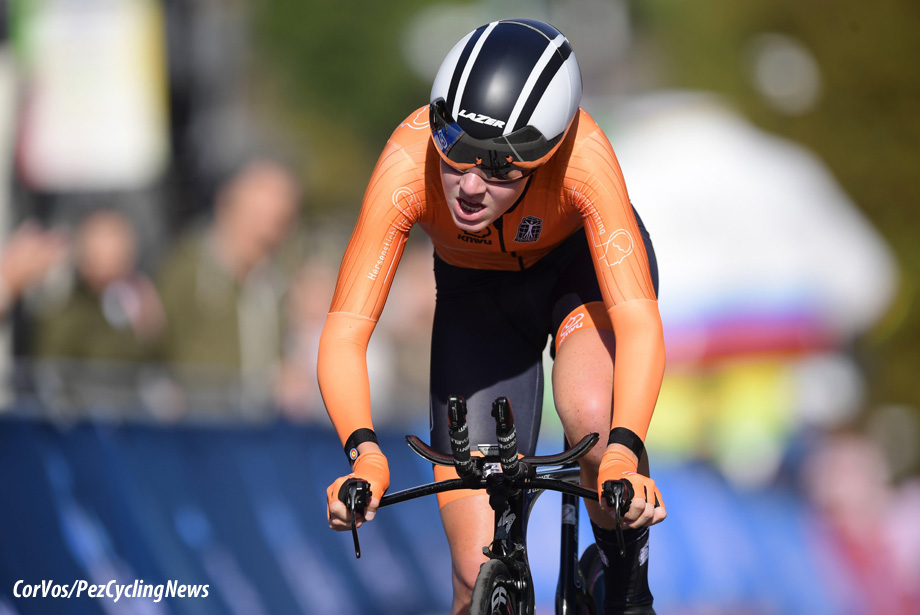 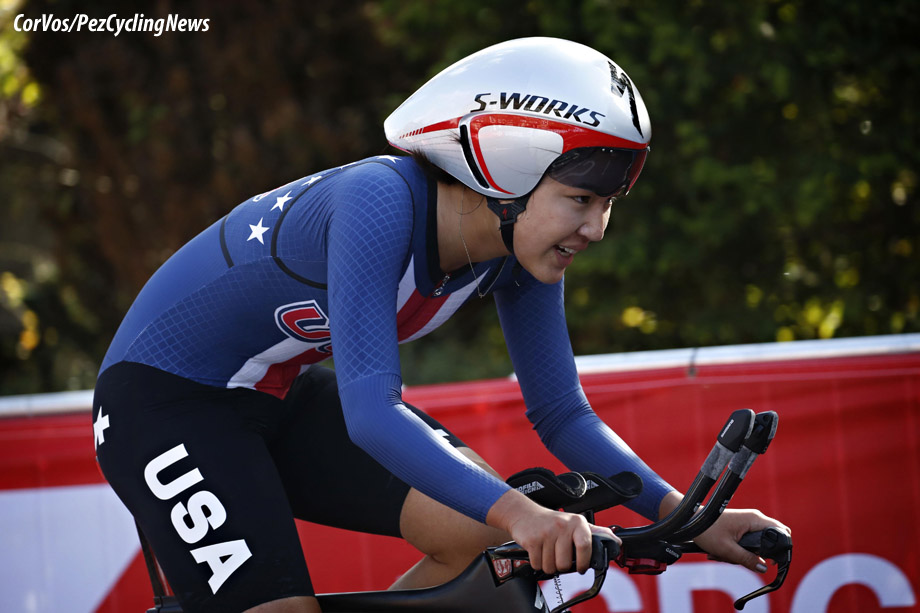 Shortly after, Bos’s top time was improved. The Sweden’s Wilma Olausson was 4 seconds faster at the finish. There was only six riders still to finish. 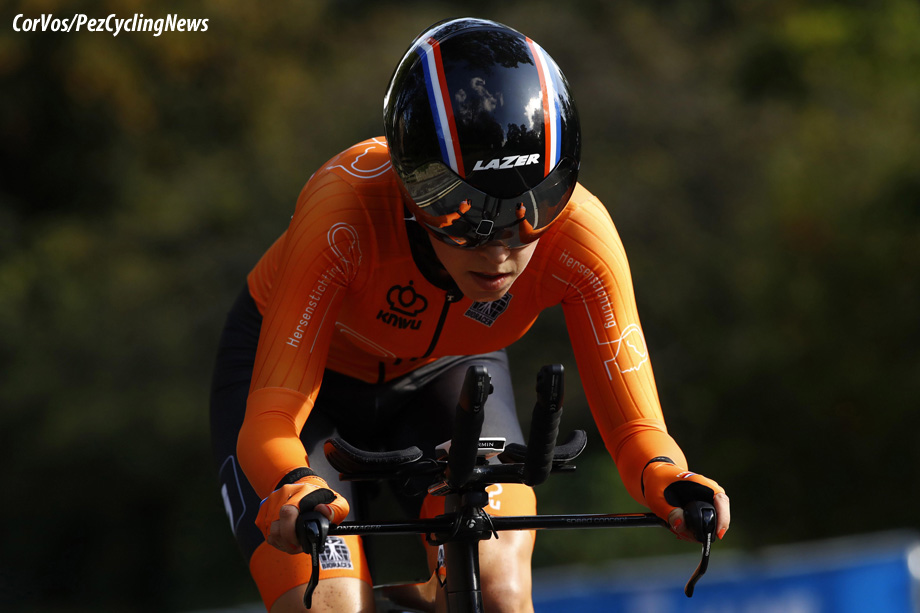 Van Anrooij in the lead
The Chilean Catalina Anais Soto Campos and the Kazakh Ulyana Sukhorebrik were not fast enough to worry Van Anrooij. The European champion caught Sukhorebrik in the final section and improved the fastest time to 22:19. Gareeva was looking fast out on the course, and was in the lead in the second part of the race, until she took the wrong turn. 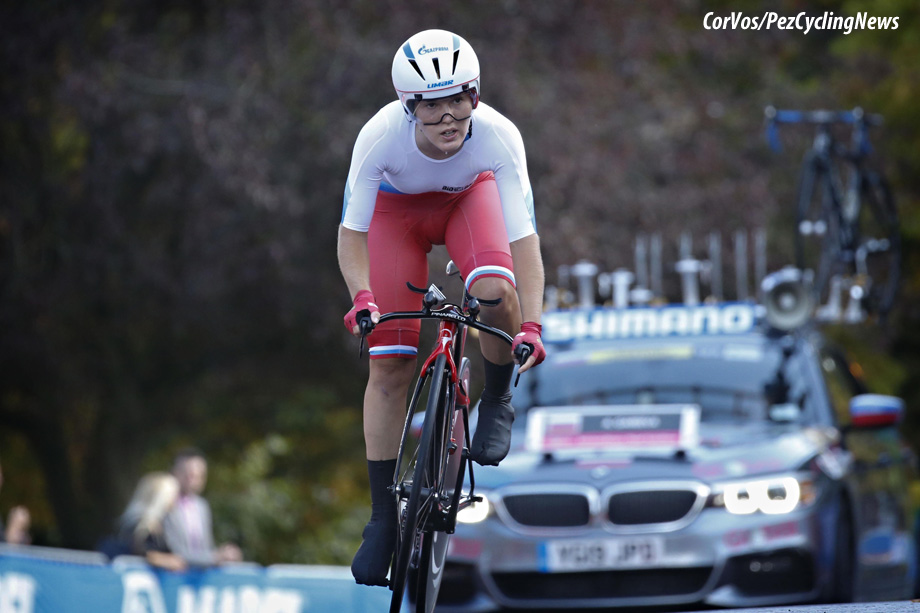 Once back on course, her lead was sufficient to overcome the mistake and she set the fastest time by 3 seconds. Italy’s Camilla Alessio was 14 seconds off with only Bäckstedt to come in. The home favourite was short of the gold and silver, but she took the bronze medal. Aigul Gareeva took the gold and Shirin van Anrooij, the silver. 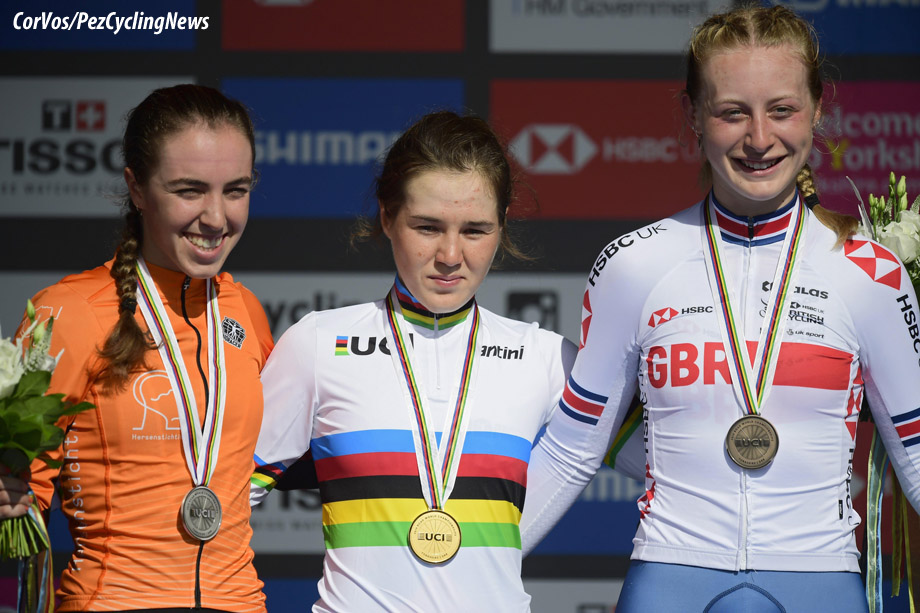