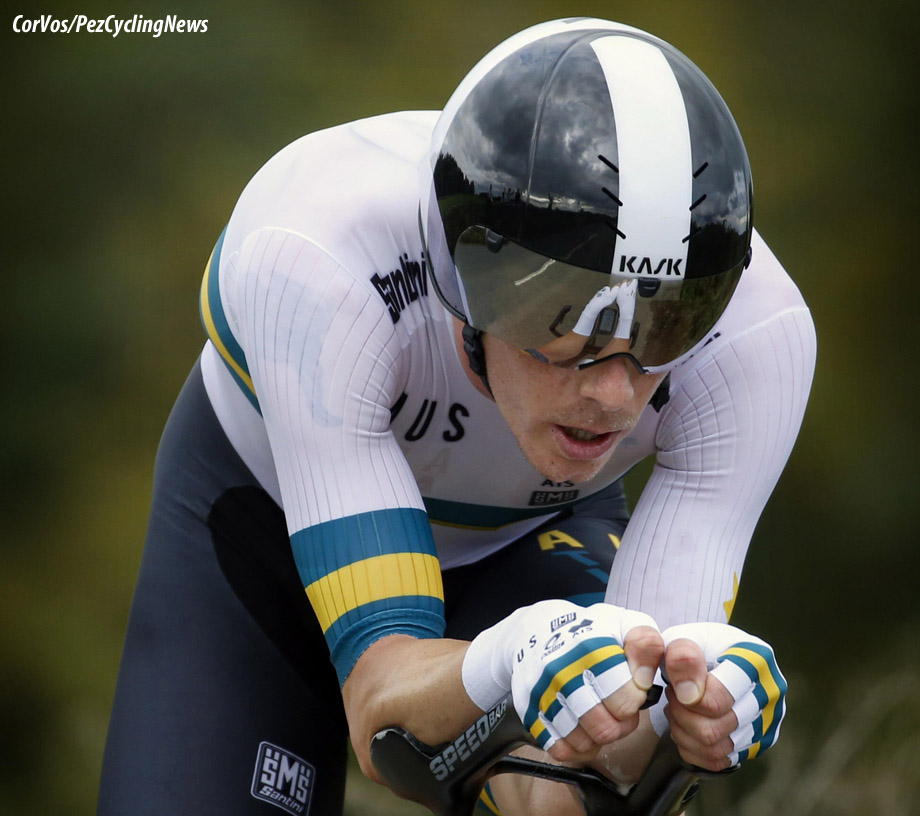 Two in a row for Rohan Dennis

Last year Rohan Dennis won the World TT title, but he didn’t have the pleasure of showing off the rainbow jersey very often. After his disastrous Tour de France, where the Australian abandoned on the stage to Bagnères-de-Bigorre, the defending champion went into hiding. Back in his home country, he prepared himself as well as possible for the World title fight in Yorkshire. 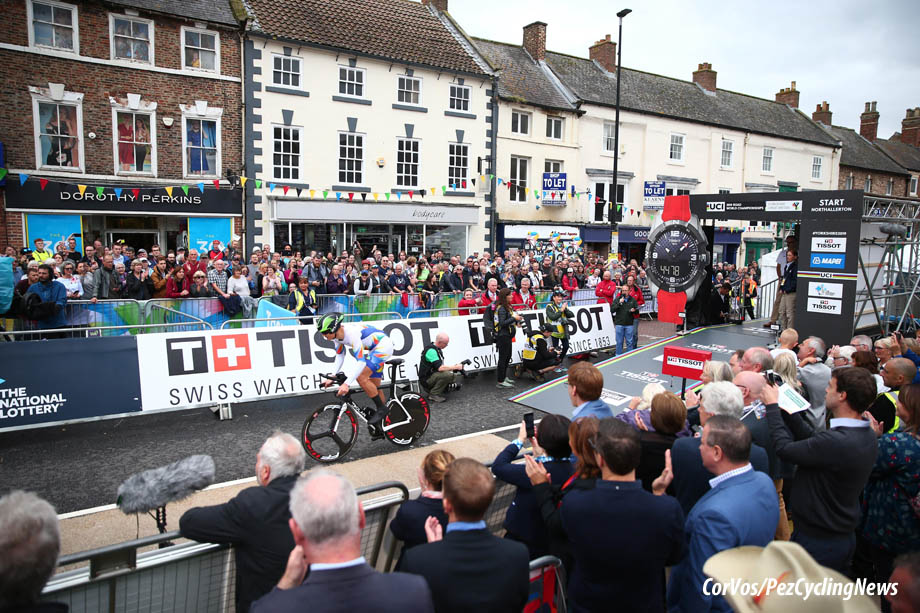 Dry roads for the men’s TT

Men Elite Individual Time Trial – Northallerton to Harrogate – 54km
Crosswinds could prove a factor right from the start as the route heads in a south-westerly direction out of Northallerton, and a short, sharp ascent on the outskirts of Masham should see early time gaps emerge . A fast section follows as the riders pass into Risplith, but from then on there is barely a flat metre of road . Despite being gradually sapped of their energy, the riders will have to keep something in reserve before one last blast into Harrogate and up to the finish line on Parliament Street.

Could Primož Roglič, one and a half weeks after his hard-fought Vuelta title, live up to the high expectations now that he has become one of the best riders in the time trial? Also Victor Campenaerts was a man not to be forgotten. He is the World Hour Record holder. Kasper Asgreen, Nelson Oliveira, four-time world time trial champion Tony Martin and Jonathan Castroviejo were among the last ten starters, were also names that could take a shot at the title. Then there was the Belgian super star Remco Evenepoel, who was the junior World time trial champion and is the current European champion. 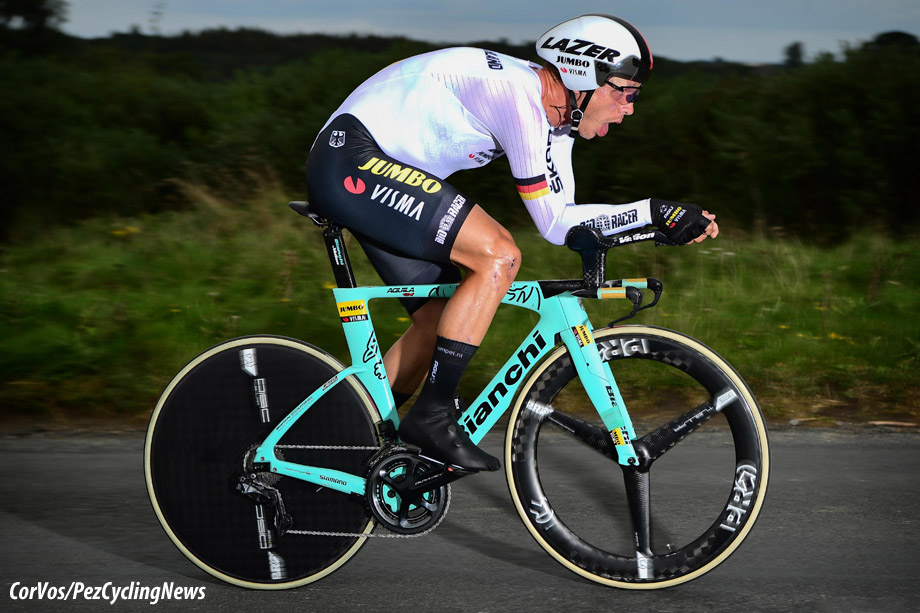 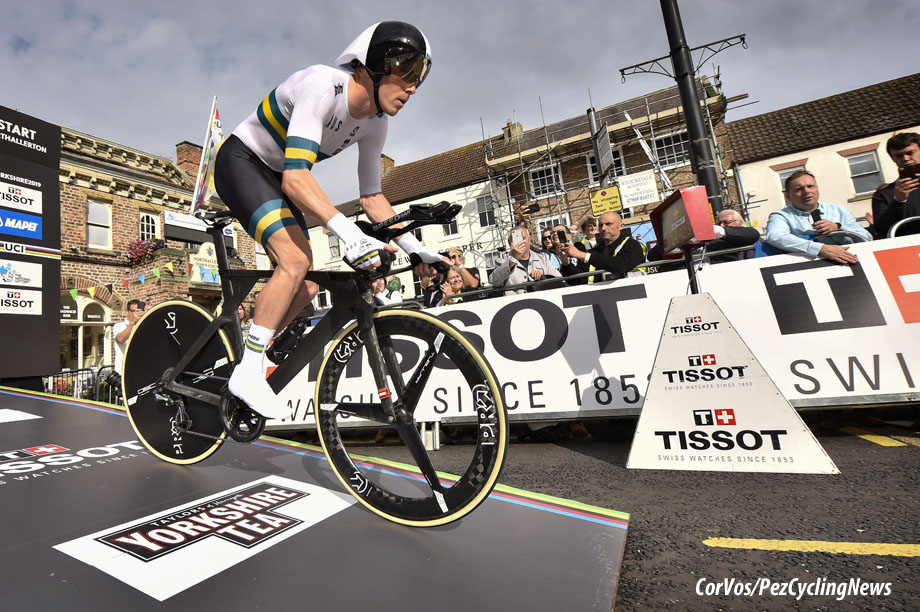 Dennis led from the start

The weather conditions were much better than in recent days, and the road surface was mostly dry. The 54 kilometre course was slightly longer than last year and with almost 700 metres of climbing it is anything but flat. 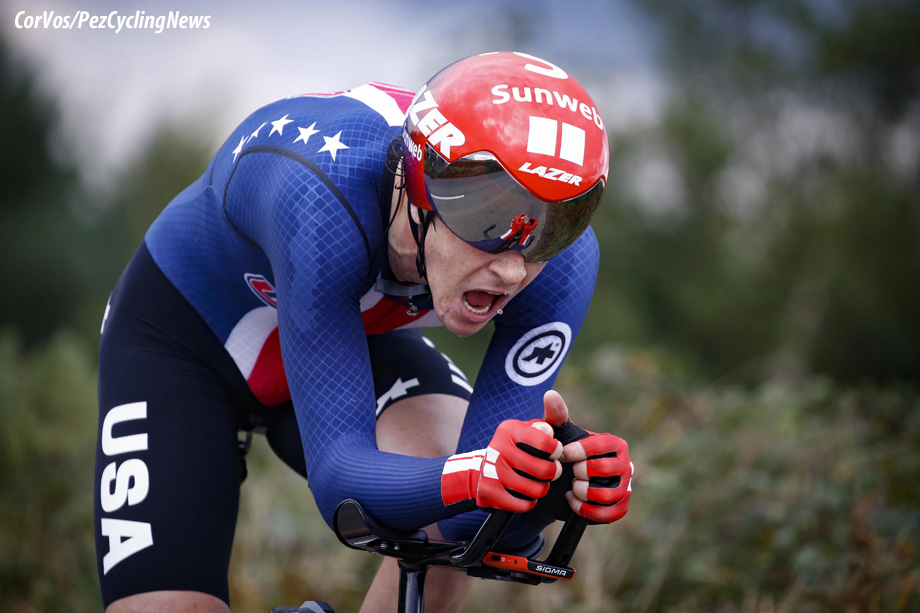 Ramūnas Narvardauskas was the first rider to start, but the experienced Lithuanian would not be fighting for a medal. Christopher Symonds was also one of the first riders. The Ghanaian triathlete is 45-years old and was the oldest participant in race. 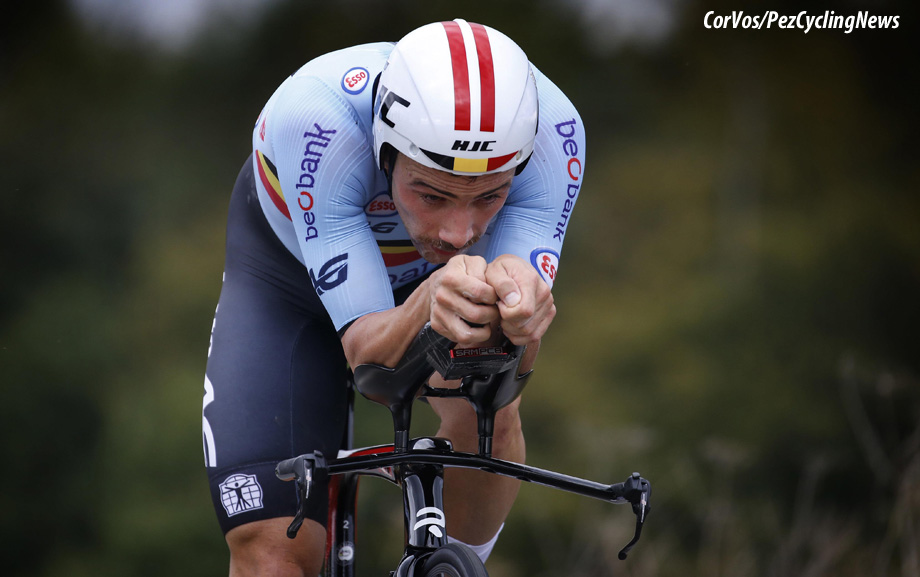 Campenaerts crashed and had a bike change 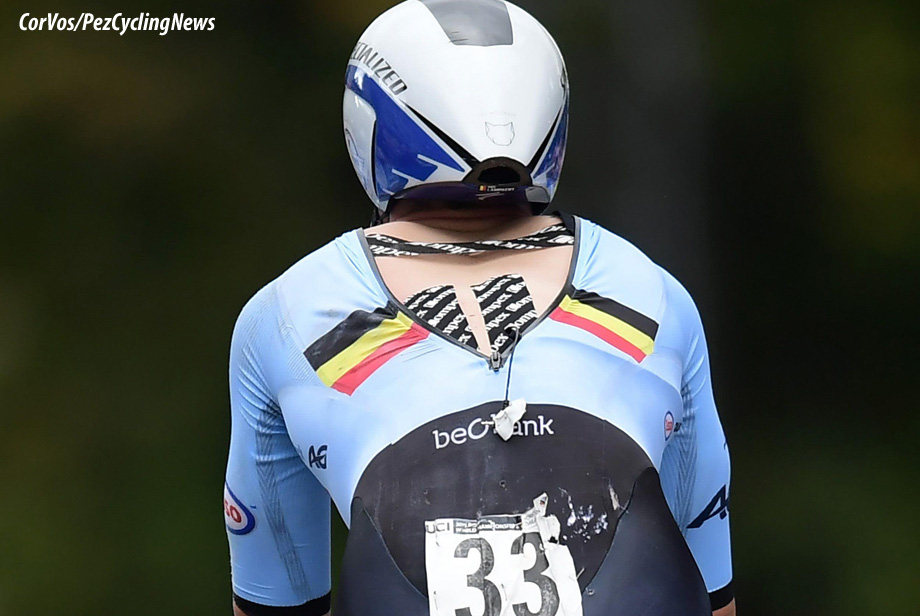 Not a good day for Belgium, Lampaert also crashed

Irelands Eddie Dunbar started fourth and caught Narvardauskas to set the first top time, but the young Irishman was soon beaten by Kamil Gradek. The Pole has extended his contract with the CCC team for another year. Out on the course, John Archibald was also on his way to a fast time and the British track specialist took a minute off top time and improved to 1:08:16. 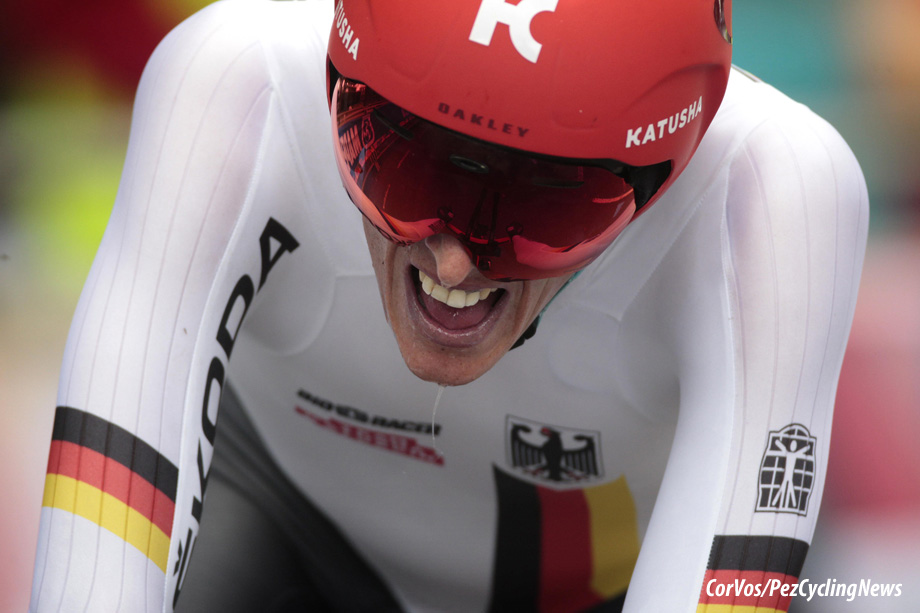 ‘Hot Seat’ for Archibald
Archibald’s time would last for some time, with Pierre Latour, Alexey Lutsenko, Dylan van Baarle and Nils Politt not getting close. It was Luke Durbridge who eventually took over. The Australian, world champion with the juniors in 2009 and U23 in 2011, set the top time at 1:08:06. Next was Alex Dowsett who set a new time of 1:07:07, followed by Filippo Ganna with 1:07:00. 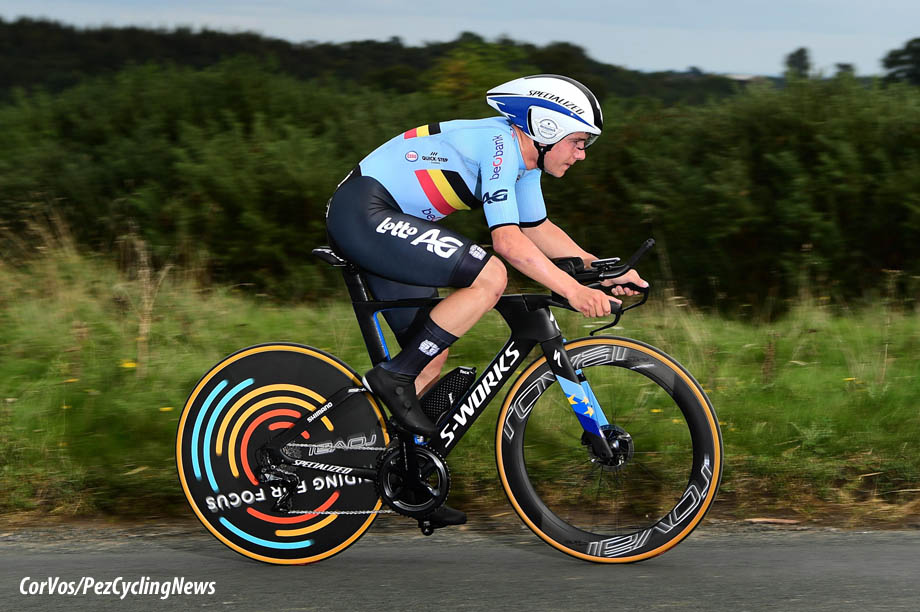 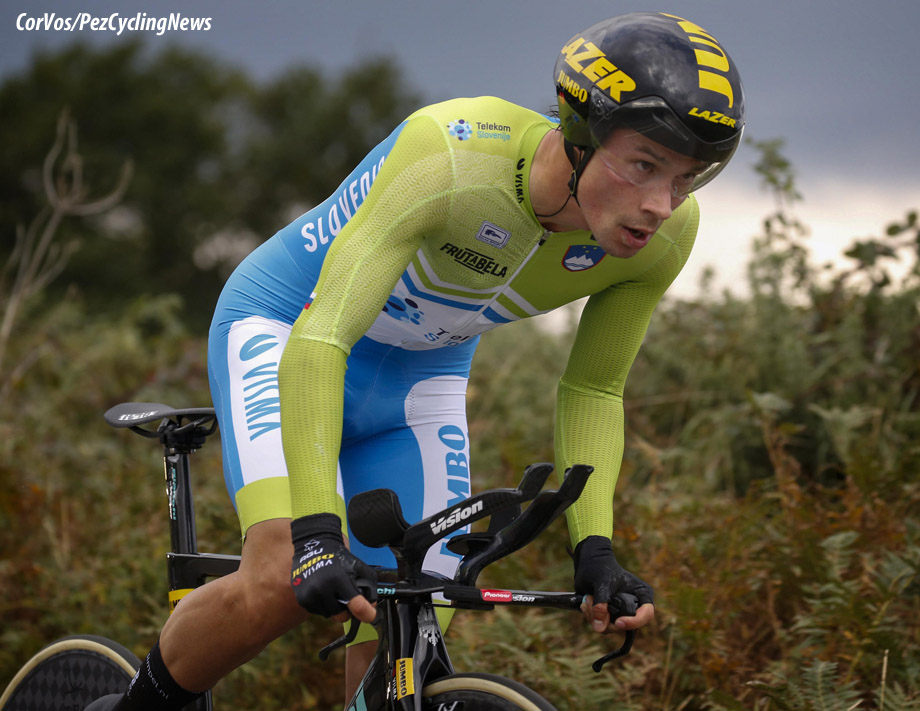 Next up: Remco Evenepoel, 19 years and 243 days, and by far the youngest rider on the course. The junior World time trial champion of last year had to save the Belgian honour after Yves Lampaert and Victor Campenaerts had both crashed. Campenaerts also had to change bikes to finish 11th. Evenepoel didn’t disappoint. The young man stopped clock after 1:06:14 and took three-quarters of a minute off Ganna’s time. Everything would depended on Rohan Dennis. Meanwhile, Roglič was unable to meet the high expectations, as he was down at the intermediate time checks and had to put a World championship medal out of his mind, for this year. 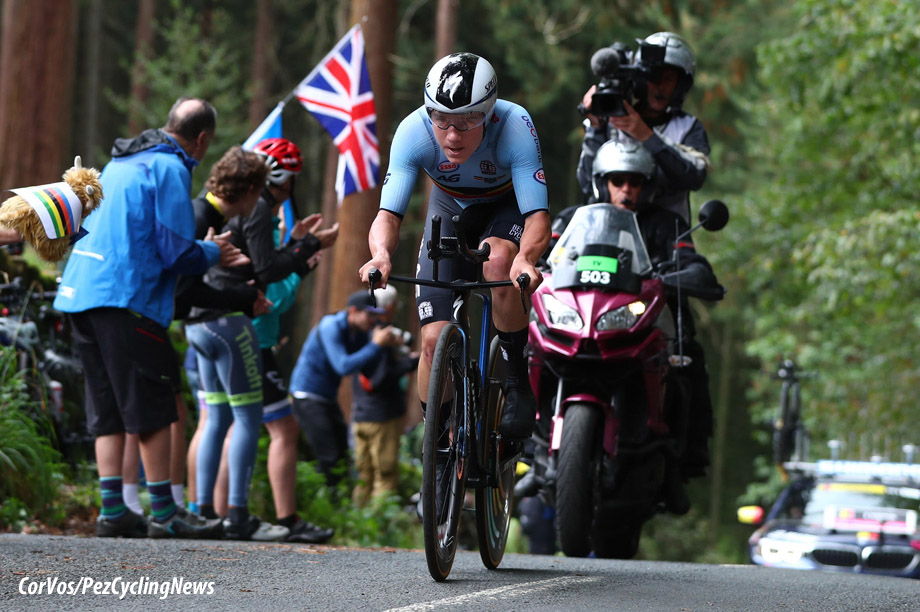 The junior champ nearly made the jump to elite champ 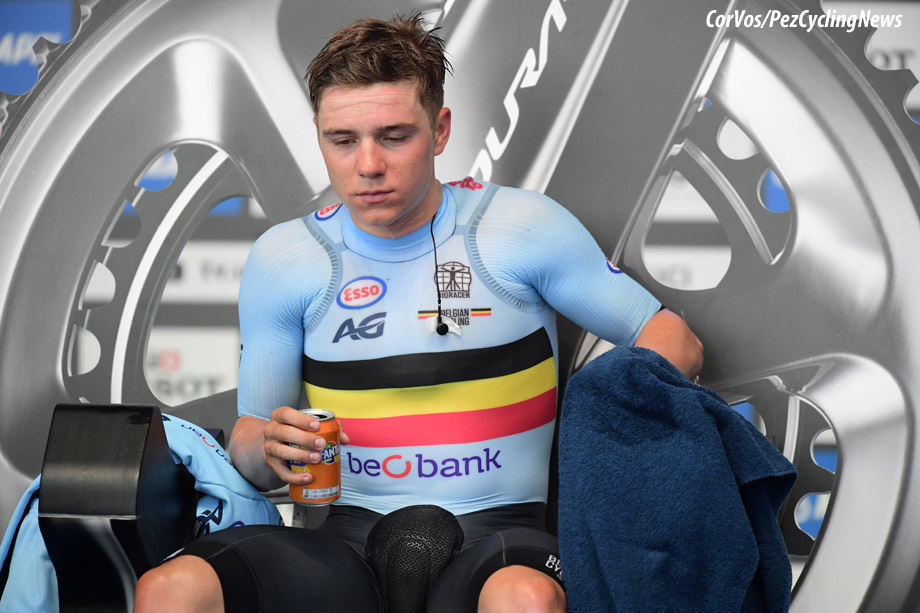 Evenepoel could dream of the win

Dennis takes his second title
The other favourites also came in one after the other. Patrick Bevin set a good time, but was short of Evenepoel and Ganna. Also Jonathan Castroviejo, four-time world champion Tony Martin, Nelson Oliveira and Kasper Asgreen did not reach the top times. 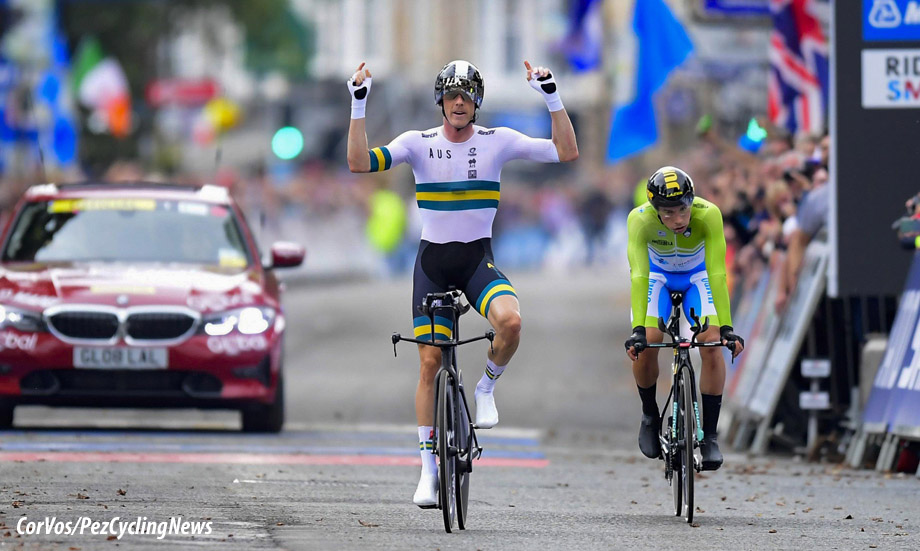 Rohan Dennis had time to celebrate

Then it was just the wait for Rohan Dennis, who had caught Primož Roglič. The Australian had built up more than enough lead along the way to cross the line in Harrogate with a clenched fist above his head. Dennis stopped the clock at 1:05:10 and put the rest at over a minute to be the World champion for the second year in a row. 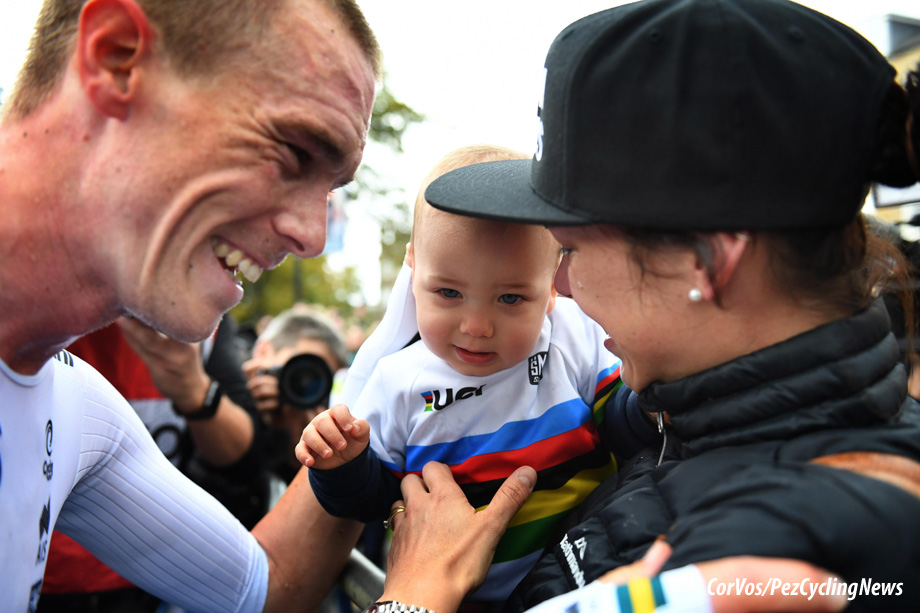 World champion, Rohan Dennis (Australia): “It went absolutely perfect today. I started without too much preparation. I was at home a lot and worked a lot on my mind. To be able to prepare myself mentally for today was much more difficult than it looked. I am indebted to many people and it is good that I can repay them on the day that it really matters. I got into my rhythm and at the first time point I knew that I was 20 seconds ahead. Then I knew I could give more. I didn’t slow on the climbs, climbed as quickly as possible to get back to the rhythm on the flat parts. Bradley McGee and my coach, who was sitting in the passenger seat of the car, dragged me through today. It feels better than last year. We worked hard both on and off the bike. To be able to wear this rainbow jersey for another year is not just a reward for myself, but for all the people around me. They are an important part that I am standing here, so that I could share this with them on the finish line was very special. After the Tour de France I trained a lot on and especially with the bike. It has been hard. It was very different from my usual training. We sometimes joked that I was preparing for the winter season, but it wasn’t really joking. It was a difficult period. You are in a hole and it is difficult to keep your head. You don’t have anything in the short term to focus on, a small competition for example. You have been on the sidelines all the time and there is nobody to help you. You will be training most of the time. It was my choice to step out of it, nobody else. To be honest, I left the Tour on my terms and what was best for my health and my future with my family. At first it was hard to see the long-term benefits, but it was the best decision I made. Even though it was a very difficult period for me.” What about Remco Evenepoel? “Hopefully he can wait a few more years, because he will be great. In a word: impressive.” 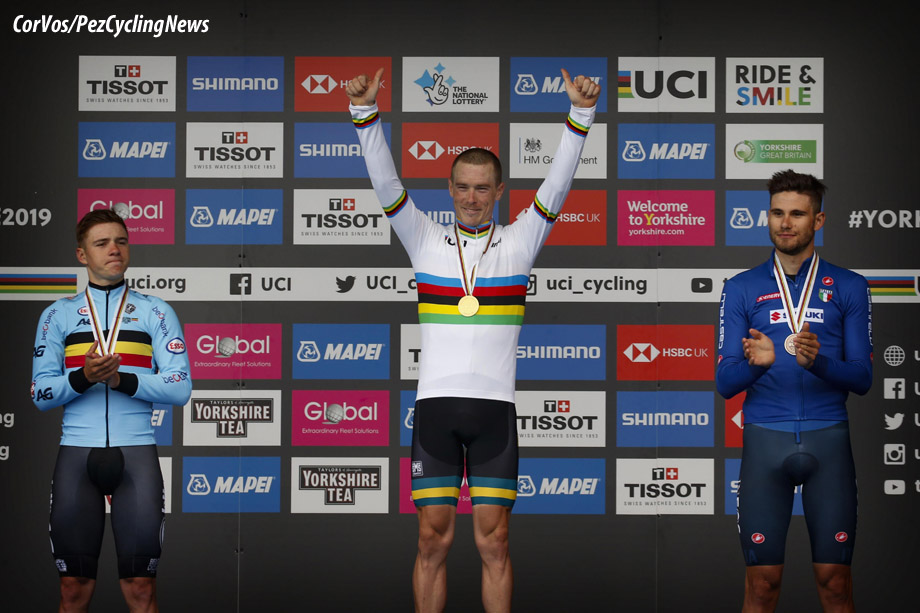 TT rainbow jersey No.2 for Dennis