World’s Roadside: The World Cycling Championships men’s road race was always going to be an epic, but then the weather gods dialed that epicness up just one notch more with some monsoonal style rain. PEZ’s own Ed Hood was there roadside, in the rain to capture the action in the wettest and longest World Championships for many a year. 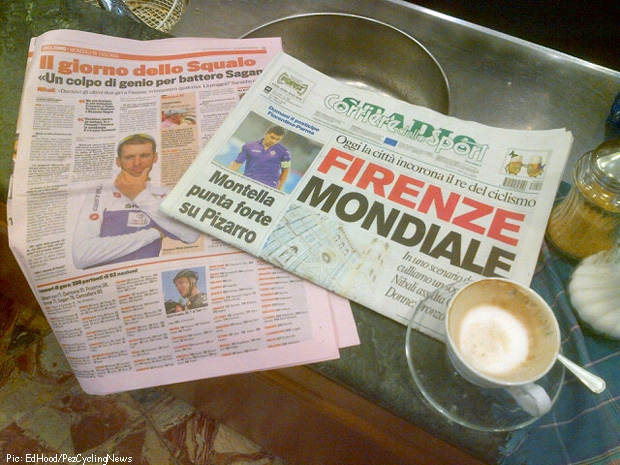 There was only one way to start a day like this; standing at the bar with your Gazzetta Sportiva (that’s the Sunday edition) and Corriere dello Sport with a cappuccino in your hand. If you’re a stats junkie, they’re all here: 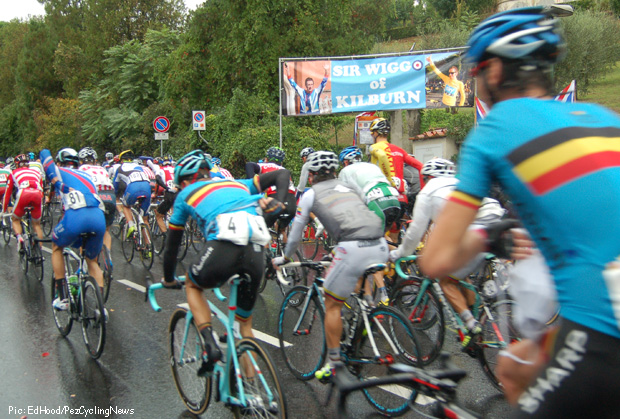 Sir Bradley Wiggins had his fan club on hand although no one had him down as a favourite, especially now he’s put muscle mass on to get his TT power back up. Still we’d rather expected him not to be dropped so early on the first climb of Fiesole where this homage to him had been set up. There was a Chris Froome banner too – but it blew away… 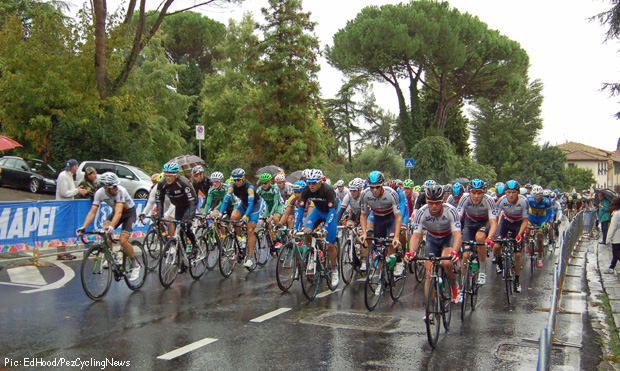 And whilst the GB team looked impressive, riding tempo on the break first time up Fiesole they were destined not to finish a single rider. There are two ways to look at it; with Wiggins patently not ‘up’ for a day in the rain and Froome neither a one day specialist nor recovered from the demands of the post-Tour criterium/PR circus, once they were gone there was little reason for their domestiques to ride on.

On the other side of the coin is that this gave an opportunity for the team riders to step up and ‘honour the race.’ 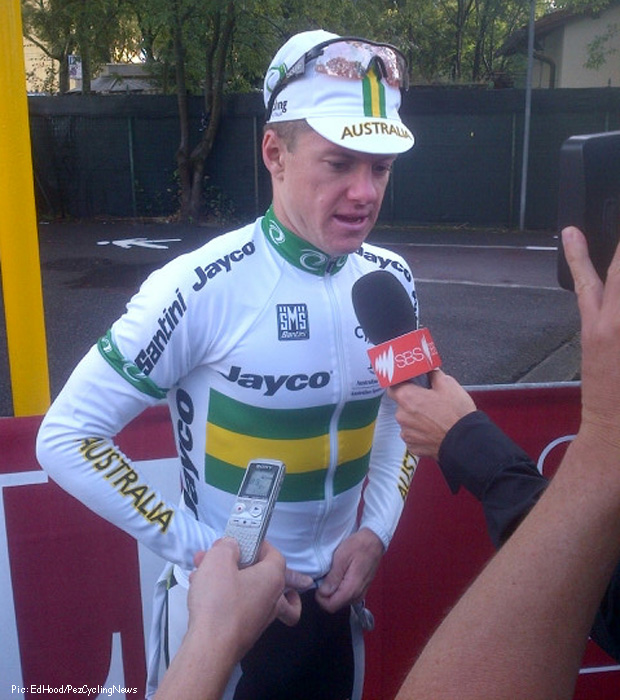 The Aussie Simon Clarke has come a long way from riding U23 six day races, where PEZ first got to know him. A rider with some excellent results in his own right, including a Vuelta stage win, he was here in the role of super domestique but when he realised that team leaders Richie Porte and Cadel Evans were out, he stepped up to the mark and took responsibility. A palmares boosting seventh place was the end result, just behind Sagan – GB take note, please. 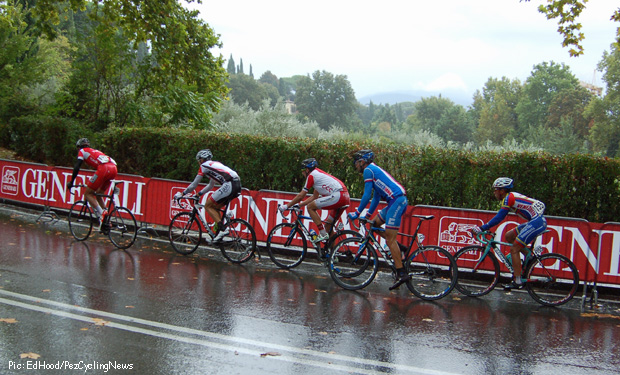 If Costa was the winner and Nibali the loser, then these guys were the heroes. Yonder Goday (Venezuela), Matthias Brandle (Austria), Jan Barta (Czech Republic), Bartosz Huzarski (Poland) and Rafaa Chitoui (Tunisia) disappeared up that wet road early on the long haul from Lucca to Florence. But it wasn’t until the last two laps that Barta then eventually Huzarski capitulated – major respect, gentlemen. 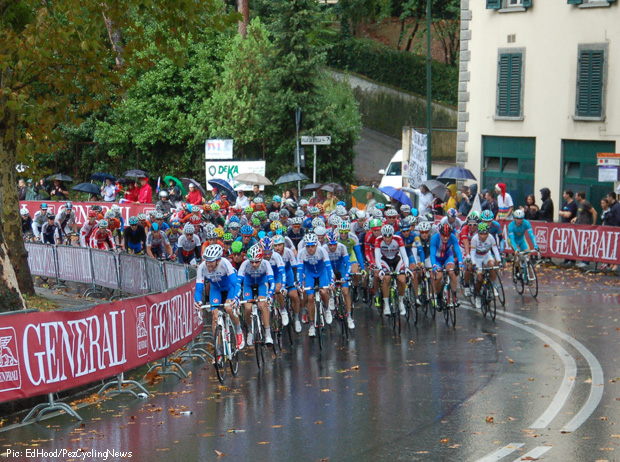 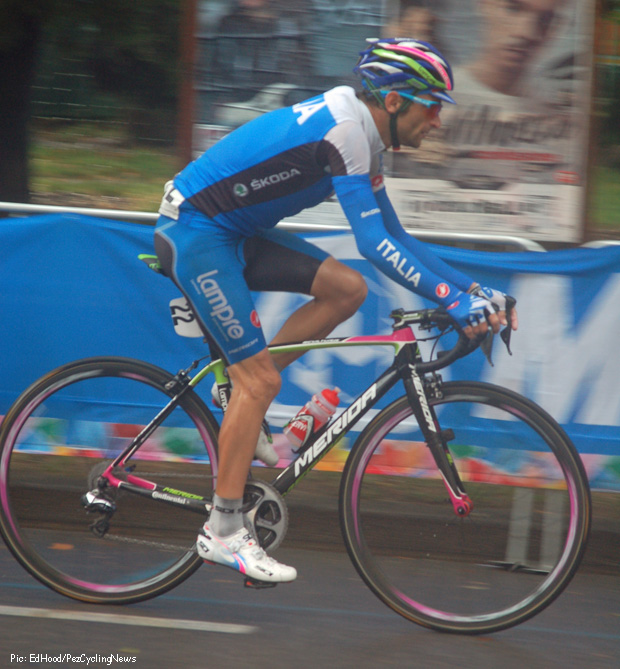 It’s hard to take a pop at men who rode the way that the men in blue and white did; especially one who worked as hard as Michele Scarponi. But the Spanish knew that the Italians would take it up and played the waiting game whilst the Italians gave too much, too early. Nibali’s men were all burned up when he needed them – but respect has to go to the Italians for taking responsibility, they raced hard and with their hearts. 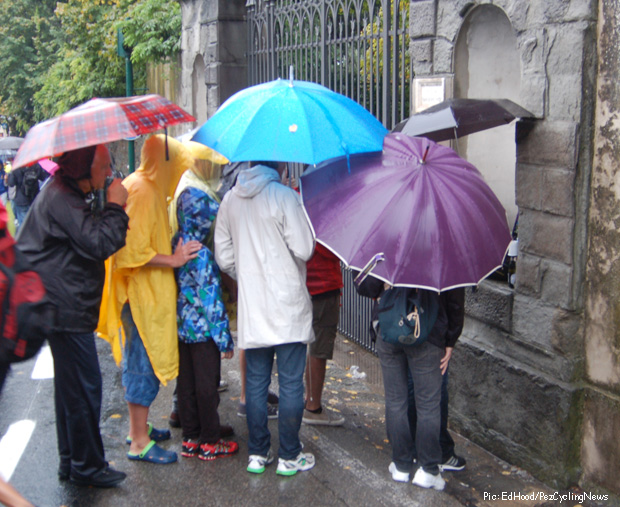 It was a gruesome day for all, the riders had to contend with six hours of rain, road muck and crashes and the photographers had to battle against near darkness and a lack of colourful images to attract their lenses. And for the fans it was a test of endurance rather than a day out – but you have to admire their dedication to the cause. One had his mobile TV set up in a niche in a wall usually reserved for religious icons. I’m sure that given the weather and the fact that Nibali was martyred this sinner will be granted forgiveness. 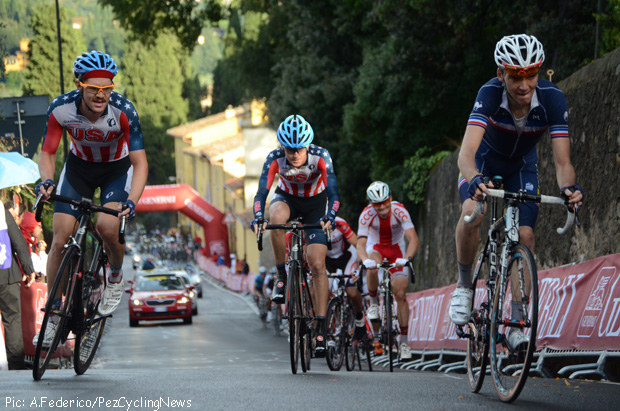 Tejay van Garderen and Chris Horner were the big hopes for the USA but both were gone early; and just as Simon Clarke did for Australia, young Alex Howes took it on for the USA. Refusing to be overawed by the company he was in the thick of it until the ‘Bigs’ gave total commitment on that killing last lap. 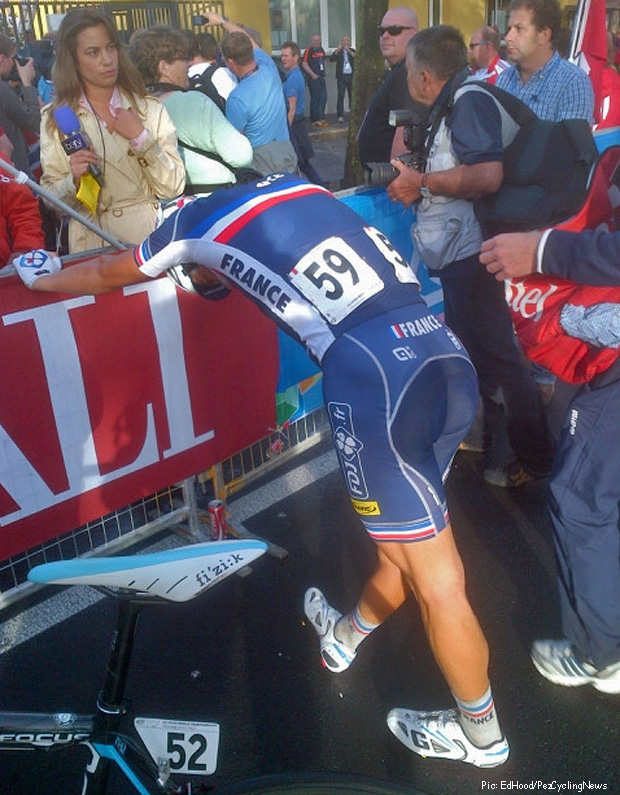 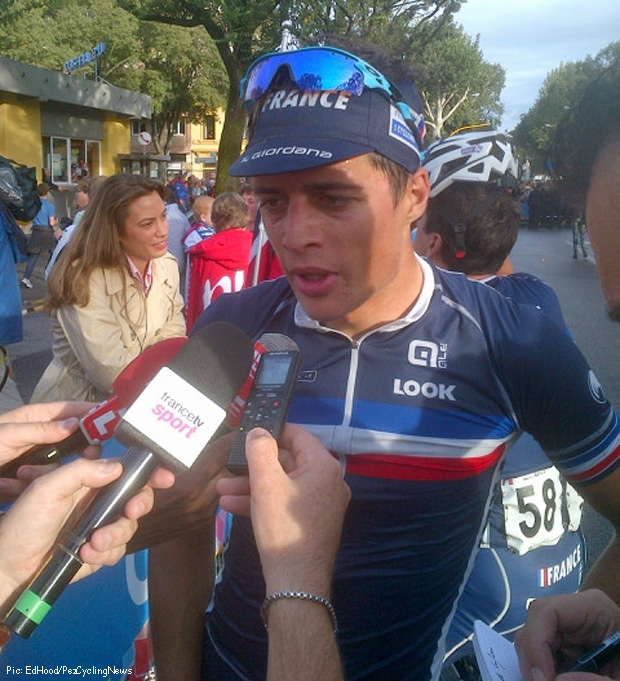 One of the encouraging aspects in the peloton this year has been the resurgence of France as a cycling nation – Tommy Voeckler’s star may be on the wane and Sandy Casar’s extinguished but in riders like Bouhanni, Coquard, Demare and Pinot the portents are good. Today was no exception with a young French team finishing six of its men in this race where only 61 finished from 208 starters. Arthur Vichot was best in 18th spot – PEZ has a soft spot for the man since le Tour when he looked hyper cool in his French champion’s tricot. 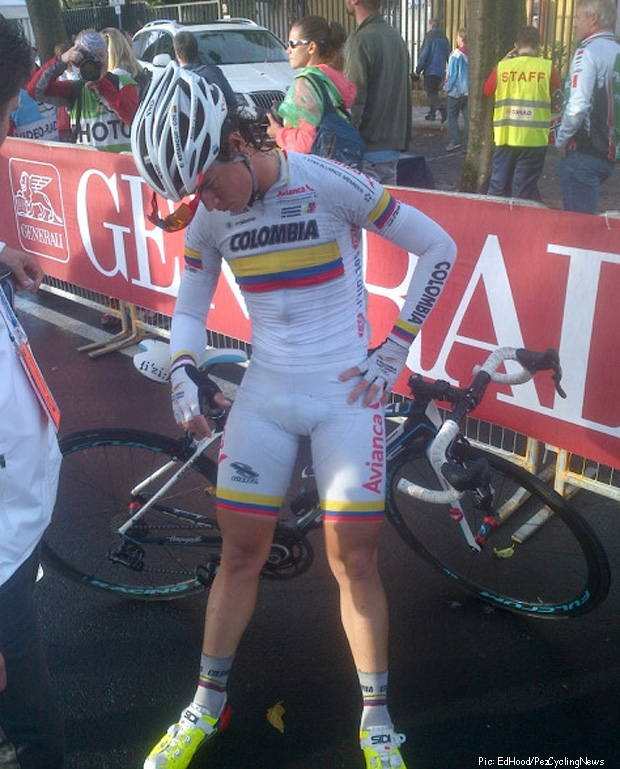 ‘Joy and pain, sunshine and rain,’ goes the song with plenty of all four to be found in Florence on Sunday. Colombian Carlos Betancur’s pain was plain to see, after the finish line he stood quietly gazing at his feet for many minutes. He rode a stellar Giro but disappointed in the Vuelta – however it was apparent the Spanish race was but preparation for Tuscany. This is how it feels when dreams go wrong. 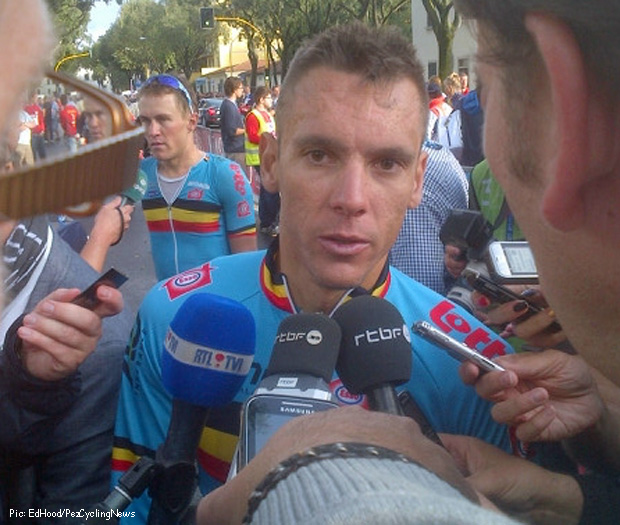 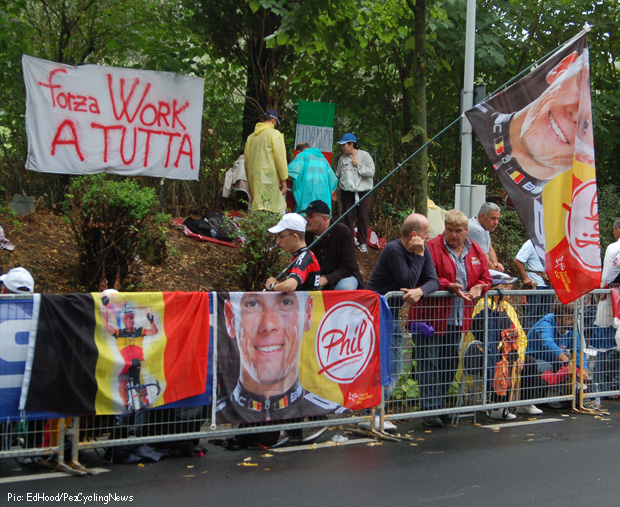 ‘The king is dead, long live the king!’ Phil Gilbert may have been usurped but that doesn’t mean he’s free of his Media commitments. No sir, Belgium need answers – the papers will be full of it today and ninth is no use to the nation which has won more professional/elite road race championships of the world than any other. 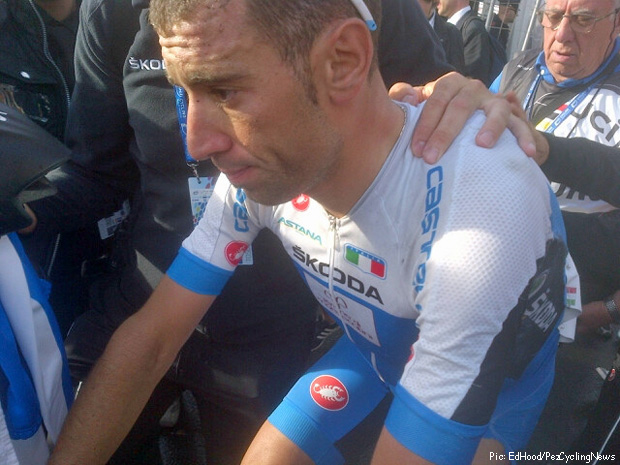 Vincenzo Nibali: There’s no doubt that the man ‘honoured the race’ – OK, so there was a little help from a team car but that’s how it is in pro racing if you come down. There would be no complaints from other nations – it’ll be their turn to do it, soon. His face at the end said more than my words can. 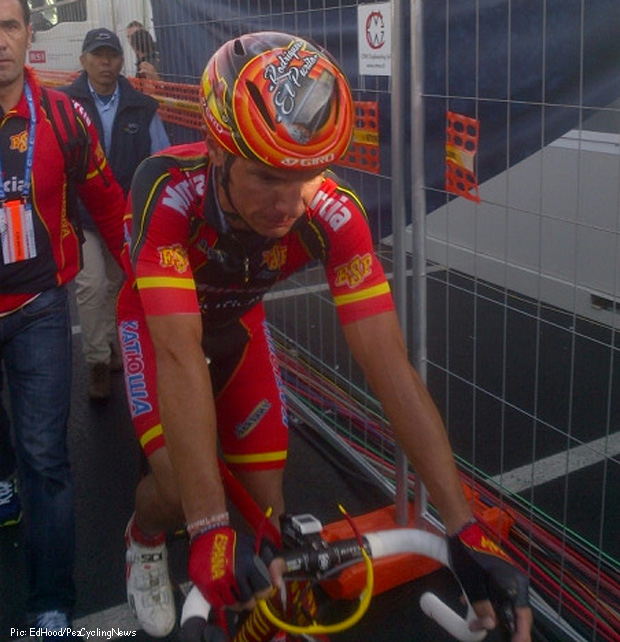 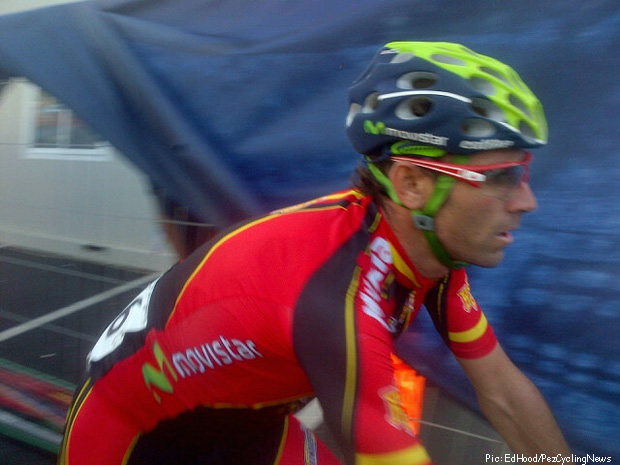 With seven Worlds road race medals between them – but no “oro” there was only one medal which mattered to Iberia’s finest. With two men from four in the final selection, they should have won. Did the fact that Costa is Valverde’s trade team mate have an influence on the Spaniard’s commitment to counter and chase ?

We’ll never know, but it would have been hard for Alejandro to live down if he’d bridged and Costa or Nibali had won. That Rodriguez’s heart was broken was plain to see; Valverde is perhaps made of sterner stuff – or is he just better at hiding it . . . 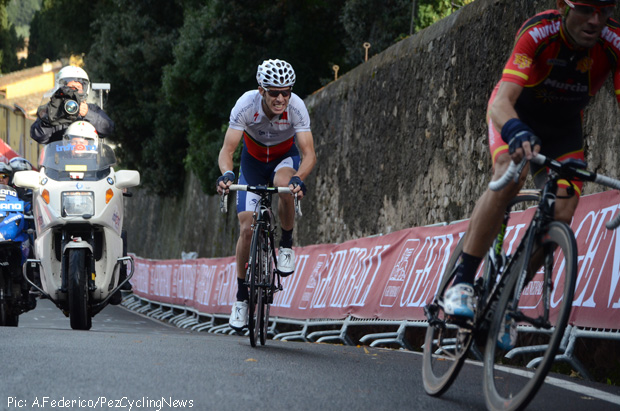 Please don’t say; ‘who’s Rui Costa?’ he’s been a Caisse d’Epargne/Movistar man since 2009 – that says a lot, they don’t sign duds. His palmares include Tour stages, the Four days of Dunkirk, Tour de Suisse stages plus the GC in that race twice not to mention the GP Montreal. All of that means he can climb, he’s tough – and he’s smart.

These qualities were all on display in Florence as he remained cool as a cucumber in the hottest moments of the final shoot out. Just a hunch from me – but we’ll see more than one win from the rainbow jersey in 2014.