Race Report: There was a right royal battle for the 2014 time trial crown and in the end it came down to the two top men against the watch; Bradley Wiggins and Tony Martin. Martin was the early leader, but Wiggins put the pressure on for the final win.

Bradley Wiggins said this would be his last attempt at the World time trial championship; it was either today or never. The British champion started slowly and was behind Tony Martin at the first time check, from then on he changed up a gear to pull ahead and put some extra time in the bank on the tricky final section. Young Tom Dumoulin showed he’s the man for the future taking the bronze medal.

The Course
47.1 kilometres on a mostly rolling course for the first 30 kilometres on a big circuit, then hitting the hillier small lap before the descent of about 4 kilometers back to Ponferrada. There are 458 total meters of climbing, so the course is hardly flat. 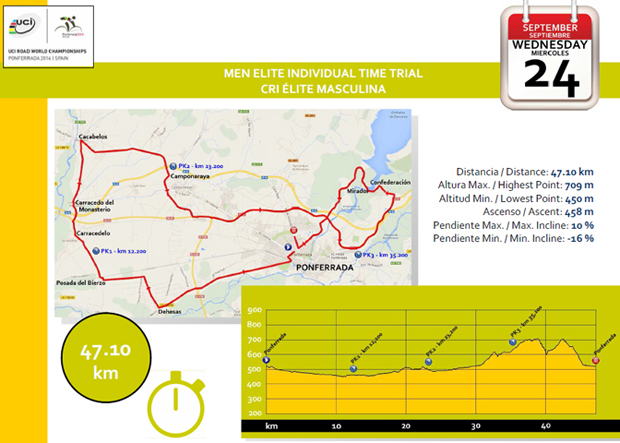 3..2..1..
First man off of the 64 starters was Gorgi Popstefanov from Macedonia and the weather was nice, but as with other days there was always the chance of a storm later in the day.

Of the early riders there were no startling performances to the first time check, 14 minutes being on the fast side for the 12.2 kilometres. Alexandr Pliuschin of Moldova holding the early fastest time putting up an average speed of just over 52 kph.

Heading out of the start house was the 44 year old Lars Teutenberg of Germany who is Tony Martins’ aerodynamics coach, but also fast enough to make the German team.

Into the last 30 riders with Nico Roche of Ireland and Tinkoff-Saxo, he said yesterday: “I think it’s a very nice course. The first part is very fast and the true powerhouses will benefit from this part. However, the second part is a bit more complicated with a relatively long climb with 15 kilometers to go. It’s going to be intense. I’ll try to go fast on the flat section and keep the pressure on the slope. I’m actually not sure what to expect regarding results. I can only tell that I’m motivated and I’ve been working hard for this.”

The First Finishers
First rider to finish was Tobias Ludvigsson of Sweden with a time of 59:58, but he didn’t have to sit in the ‘Hot Seat’ for long as Pliuschin beat him with his time of 59:13. Tanel Kangert of Estonia started slowly building up to fly through the finish with the next new fastest time of 58:58. Ovechkin fought his bike up the finishing straight for the next to record the fastest time with 58:43.

Portuguese TT champion; Nelson Oliveira went through the 3rd check as the fastest (42:34) and had caught the two riders ahead of him. At the finish Olivera showed he could ride a good time trial as his time of 57:47 was nearly 1 minute faster than all the others (so far).

The Last 20 Riders
Andrew Talansky (USA) kicked off the ‘Top Twenty’ riders and some more recognizable names. He was chased by Cataldo (Ita), Brandle (Aut), Castroviejo (Spa) and Canadian Svein Tuft. Out on the road Russian Anton Vorobyev equaled the times of Olivera through the 1st and 2rd time check, but he was slowing on the hilly part of the course. The other Portuguese rider; Tiago Machado pushed his way in to 2nd place at 30 seconds. At the 1st time check Belgian champion Kristoff Vandewalle became the fastest with 13:47. 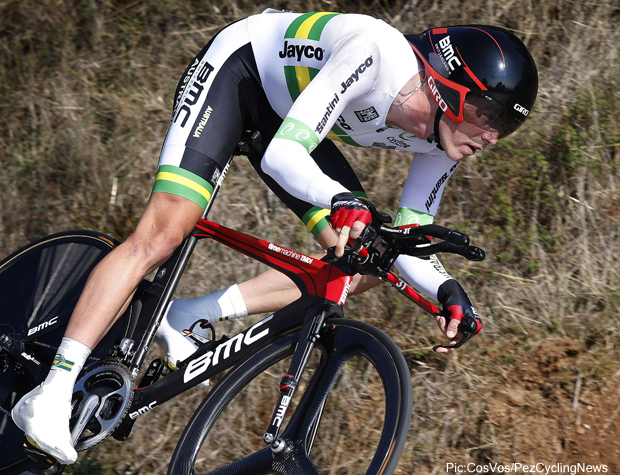 Rohan Dennis (Aus) looked to be on a flyer, but ran out of steam

Sylvain Chavanel (Fra) posted a new fastest time at the 1st checkpoint of 13:35 as the last two riders, Wiggins and Martin, hit the road.

At the 1st check Tejay Van Garderen was 28 seconds down on Chavanel, but Jan Barta (Cze) got within 1 second of the Frenchman, as Kiryienka was 6 seconds back. Next was Dennis at 4 seconds. Wiggins came through a shade under 1 second faster than Chavanel. Tony Martin was 4 seconds faster than Wiggins. 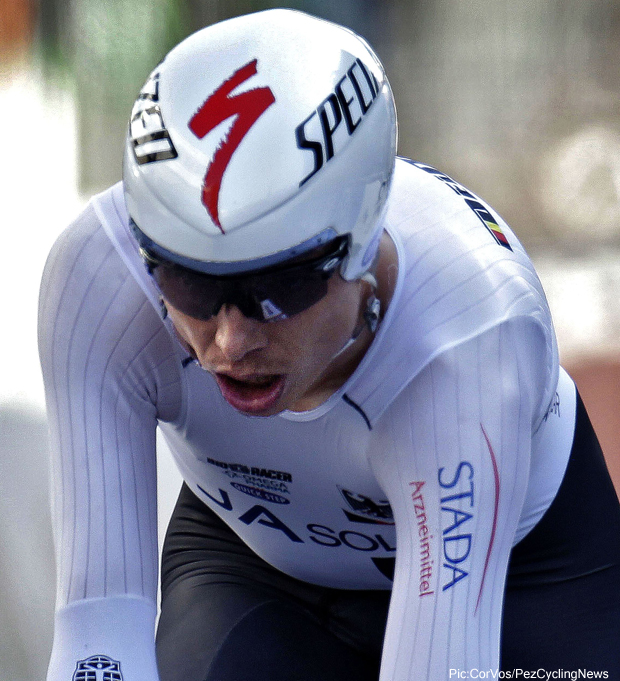 Tony Martin gave it his all, but in the end he was disappointed with second

At the finish Vorobyev pushed it hard to finish 8 seconds slower than Oliviera for virtual second.

At the 2nd time check (23.3k) Kiryienka was fastest by 5 seconds from Chavanel, Dennis was even faster by 10 more seconds. Dumoulin was 15 seconds down. Wiggins set a new time 7 seconds faster than Dennis and then Tony Martin came in 2 seconds down on the British champion. Was this the end for Martin?

Oliviera was still the leading rider at the 3rd check after 35.2 kilometres, Kiryienka was faster by 17 seconds as Dennis had dropped behind the Belarus rider by 5 seconds. Wiggins took 27 seconds out of Kiryienka and more importantly, for him, he was 9 seconds faster than Martin.

Sylvain Chavanel had started too fast and finished with a time of 58:53, which will not be in the top ten by the end of the day.

Into the finish and Tejay Van Garderen was not on a good day as Jan Barta caught him on the line; 58:03 for Barta. Vasil Kiryienka powered up the finish for a new fastest time, beating Oliviera by 33 seconds, the time to beat: 57:13.

Rohan Dennis came in with 57:23, not good enough for a podium place at the end of the day. Dumoulin had not featured highly in any of the intermediate checks, but at the finish he had 7 seconds in hand on Kiryienka to take the ‘Hot Seat’ with only Wiggins and Martin to come home. 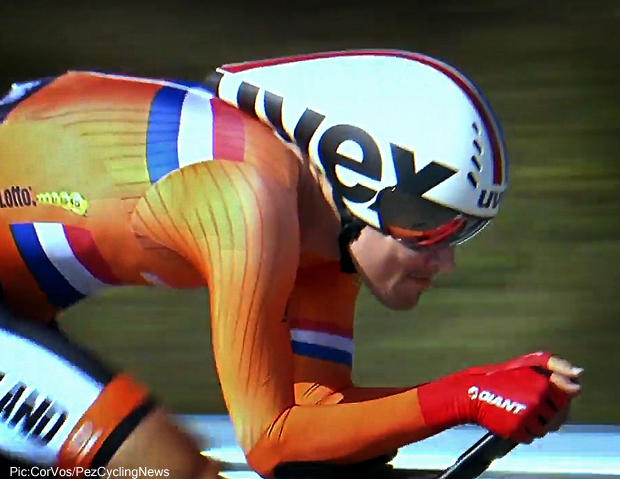 Bradley Wiggins took 40 seconds out of the Dutchman, Dumoulin, and it looked like the British champion would now be World champion. It looked too much for the German as he gave it all he had for a time 25 seconds slower than Wiggins. 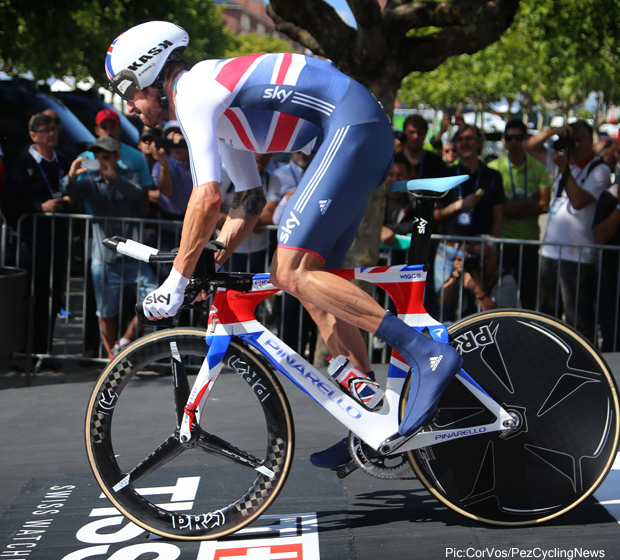 Wiggins’ last chance at the TT and he took it

The Olympic time trial champion, Bradley Wiggins, took the Rainbow jersey at his last attempt, what next? The hour record.

Bradley Wiggins (GB): I knew coming into this I had the legs and when I saw the course I knew I had a chance of beating Tony. I dedicate this win to my family as they had to put up with me during July (as he didn’t ride the Tour de France). I knew it would be won on the final section. My last attempt at the title and I win it. The next thing is the hour record.”