Race Report: All eyes were on past champions Omega Pharma – Quick-Step to take their third team time trial World championships. It wasn’t to be, maybe it was the rain or the wind, or just that the BMC team (and Orica-GreenEDGE) were faster.

The UCi World Team Time Trial Championships – 57 K and a race of two halves, wide, fast and open to begin with. But if proof is required that the second half of the course is more technical, tricky and should be handled with care then a horrific crash for the Rabo Liv team in the ladies race – when their lead rider clipped a barrier – serves warning. 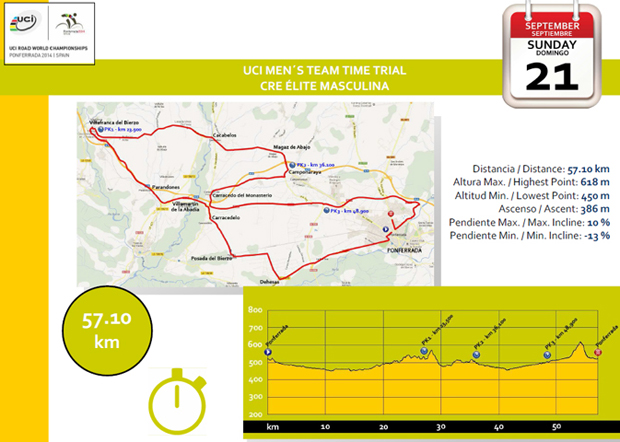 First off the ramp is Team Ecuador – with five Spaniards in the six man squad on dry roads under a warm sun.

Italian MG KVIS-Wilier is next; even a Continental team like this is ‘fully tooled’ with identical low profiles, discs, skin suits and helmets. Their line is neater that Ecuador but these are really early days, we won’t see super speed ’til the World Tour bears snarl off the ramp.

Rabobank had one scandal too many at World Tour level but they still support the ladies and U23’s and it’s their Development team who are third into the fray. Big, strong, young Dutchmen making the most of the long early straights on their Giant Trinity TT machines – uncompromising beasts designed solely for days like this.

Poles BDC Marcpol are next to get the countdown – Poland has a great history in this discipline, winning the amateur 100 kilometre world champs twice in the 70’s and taking two silver and two bronzes. Kolss from Ukraine; Adria Mobil from Slovenia; Caja Rural go – with 2012 Covadonga Lakes Vuelta stage winner, Piedra in the squad; another Pro Continental team, CCC Polsat – I love that orange kit; Rusvelo, Katusha’s ‘nursery’ squad. Caja Rural are neat and fast on the non-technical early parcours but Movistar, Sky, GreenEDGE and QuickStep will kick whatever time the Spaniards record into the long grass.

Wanty from Belgium, ProConti but they punch above their weight; Topsport Vlaanderen with track sensation Gijs Van Hoecke; Europcar with Namibia’s bearded Dan Craven aboard – he’s come a long way from riding Scottish road races with the Condor team. Kolss go top at check one with 52 kph, we can only guess how fast the big brake horsepower squads are going to go through. 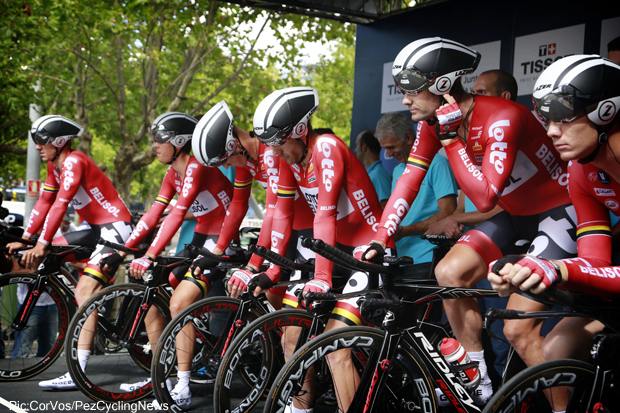 Lotto Belisol have some big, strong riders, but maybe not fast!

Former TTT kings, Garmin are next, Bauer, Farrar, Langeveld, Navardauskas, Talansky and Tour of Britain winner, Van Baarle – that’s one strong sextet and those Cervelos look quick even standing still. Rusvelo shade CCC at check one as Cannondale burn up the tar.

Lampre with sprinter Ferrari and climber Serpa – they’re not going to trouble the time keeper; then Trek with TT royalty in Cancellara not to mention Kiwi chromo man Jesse Sergent and Belgian TT champ Kristof Vandewalle. Topsport go top at check one; this is getting crazy, 53.9 kph – that’s prologue speed. Team Ecuador finish, a 1:11 – that’s not going to last long. 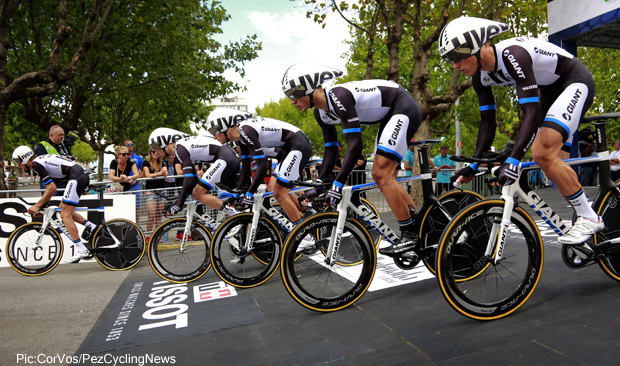 Giant-Shimano put up a good show for 8th

Giant now, with Kittel, Dumoulin and Ludvigsson there’s serious horsepower, Chad Haga is in there too; Belkin; Astana; BMC don’t have Phinney or Pinotti but they do have van Garderen, Dillier, Velits, Oss and Commonwealth Games TT silver medallist Rohan Dennis – all strong guys.

Garmin sit tight on the wheels, the speed is apparent. Despite my snide remarks, Lampre are very well drilled, but then they’re all World Tour riders . . .

Kolss go top with a 1:8 as Cannondale post quickest at check one meanwhile Rusvelo lead at check two. Katusha; AG2R; Tinkoff – at the line Caja Rural are down to four but go top with 1:7 and the hot seats have fresh chamois on them. Trek look mean, line astern behind that beast of a man Cancellara. Four Polsats swerve in, a low ‘7’ and Caja Rural leave the hot seats.

Giant look good at check one but are behind Cannondale as Rusvelo raise the bar – a 1:6 is now the time to beat. Movistar with Commonwealth TT Champion Dowsett and Vuelta TT stage winner, Malori – they’ll not be far away. Wanty can’t evict Rusvelo from the hot seat house as Sky rip out of the start house, Wiggins, Kiryienka, Siutsou, Thomas – all strong men but the best TTT squads are better than the sum of their parts . . . 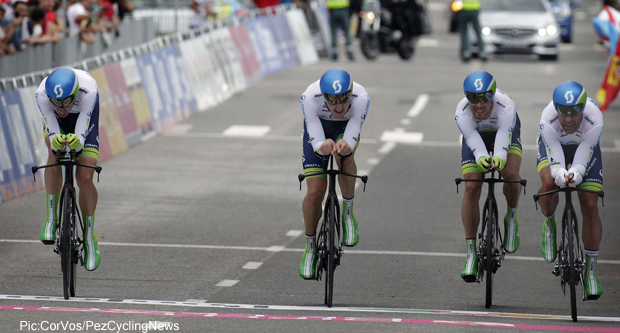 1 second last year was close, but it was 31 this year

Orica-GreenEDGE were pipped by less than one second last year, Tuft, Durbridge, Hepburn, Mouris – that’s serious horse power and they want this one, bad. BMC go top at check one.

Just one team left to start, Boonen, Martin, Terpstra, Kwiatkowski four of the best in the world and they’re reigning champions – QuickStep. Everyone is on the road – it’s for 100% for real now.

Meanwhile, Cannondale blast Rusvelo; a 1:4 long is the time to beat – and remember, that’s for 57 kilometres . . .

Trek top Cannondale at the last check as Lotto come in to finish on a ‘7,’ Garmin on a ‘5,’ those lime green boys on the hot seats hardly notice. A nice ride by Lampre – no medals but respect. Movistar just don’t look ‘on it’ today – but Trek do, 1:4:31 to go top and the Cannondale boys pick up their belongings and go.

Movistar look better now, smooth, machine-like, you can’t be human and win these things. The Spanish TV producer keeps us on Movistar; but we need to see the big three – Sky, GreenEDGE and QuickStep. Giant stop the clock on a ‘4’ – but it’s not low enough.

BMC go top at the last check and we’re back on Movistar as we learn that BMC’s first check time is the best of the day with QuickStep on the same second, Sky four back and GreenEDGE 20-odd back – those will be hard to find at this level. It’s a ‘5’ for Belkin to go sixth – but they’ll slide even further as the top seed come home. BMC are down to four men but the stop watch says ‘3’ and they go top as Trek exit the hot seats. 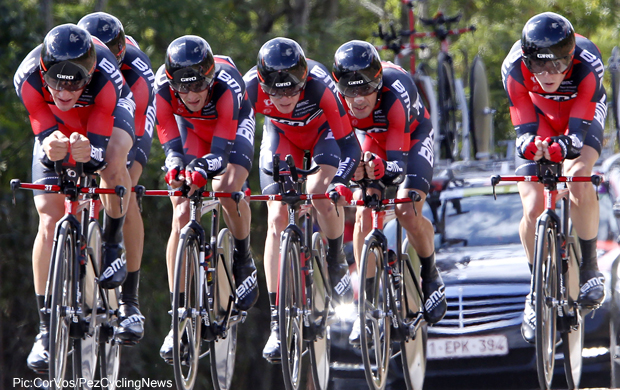 BMC pulled it off with a very strong ride

QuickStep are flying with Tony Martin doing huge spells and Boonen looking so strong but it’s very close with BMC – the champions will of course have the benefit of time checks as last time off. The saliva dribbles from Boonen’s beard but he’s unaware of it, his focus is 100% on winning this day.

Orica have pulled back their deficit to 13 seconds – but QuickStep are riding as one, a magnetically coupled robot team. Wiggins on his patriotic/hideous (you choose) union jack paint jobbed Pinarello is putting in BiG spells for Sky. Movistar are well down on BMC at the last check – it’s not going to be their day. Orica are 16 down on BMC, it’s so hard to pull time back at these speeds. 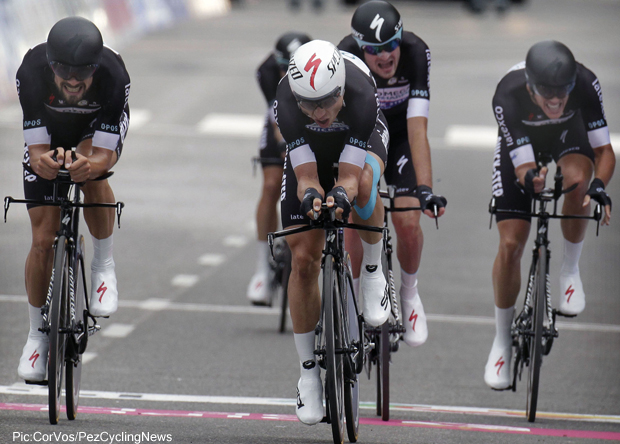 OPQS had the engine of Tony Martin, but it wasn’t enough

Sky have only four left but QuickStep and GreenEDGE have six, Sky will pay for that with 10 or more minutes still to ride. Sky are 11 seconds down on BMC at the last check. Tinkoff have all but caught AG2R, it’s a ‘4’ and shorter than Trek to go second – a nice ride.

Lefevre’s Legion still has six men but GreenEDGE are down to five and a dozen seconds down on BMC – it doesn’t look like they’ll realise the dream, this day. QuickStep hurtle on as Movistar come home, a ‘4’ – they go third, no medals today for the ‘Telephone Team.’ Last time check for QuickStep and they’re 12 down on BMC – that’ll be tough to find but they have six men and if any team can do it, it’s this one. Sky go second as the rain starts to fall, the BMC’s in the hot seats are dreaming big – and the GPS says QuickStep down 18 seconds, 21 now and they’re down to five men. GreenEDGE drive home, second behind BMC but ahead of Sky. 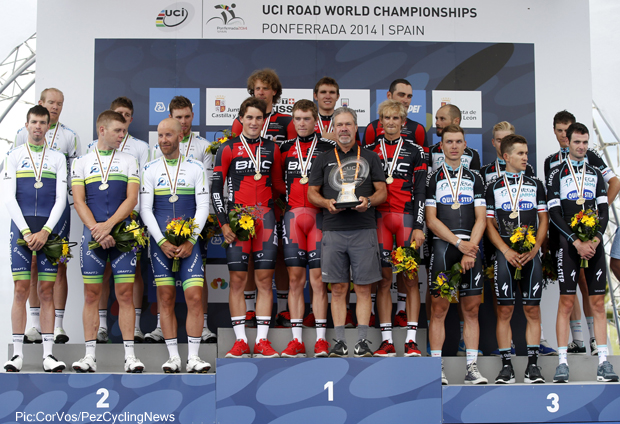 The GPS says four seconds deficit for the Belgian team on BMC, then five but they’re finishing in the rain and the last descent is treacherous. Two K to go and there’s a gap in the QuickStep string, they ease, regroup and Tony Martin goes to the front – red kite, one K. At 500 metres to go it’s confirmed, they can’t win, it’s BMC’s race; GreenEdge steal second with QuickStep third and Sky fourth.

A terrific effort by BMC but heartbreak for GreenEDGE and QuickStep; a great start to the ‘Worlds’ – keep it tuned to PEZ for the best race coverage, photographs and on the spot reports from Ponferrada.