Race Report: Lennard Kamna in the morning and Lisa Brennauer in the afternoon made for a German double in today’s World championship time trials in Ponferrada. Brennauer was one of the late starters, but she built up her speed to storm force for the win, just like the weather at the finish.

It looked like Anna Solovey would make Ukraine history by winning the Women’s individual time trial with her fast start, leading all through the race, until German Lisa Brennauer lifted her pace in the final kilometers to take the rainbow jersey by 18 seconds. USA’s Evelyn Stevens put in a solid ride for 3rd, 21 seconds down.

The mornings Men’s Junior individual time trial was won by Lennard Kamna (Germany) by 44 seconds from America’s Adrien Costa and 58 seconds ahead of Australia’s Michael Storer. Kamna is also German and European champion, but looked quite surprised at his win.

The Women’s race covers the same 29.5 kilometer course as the junior men, with its fairly straightforward first 20 kilometers before the little climb and technical finish. 49 riders set off at 2 minute intervals in bright sunshine, but there were dark clouds on the horizon, if it rains the final drop back to Ponferrada will be very tricky. 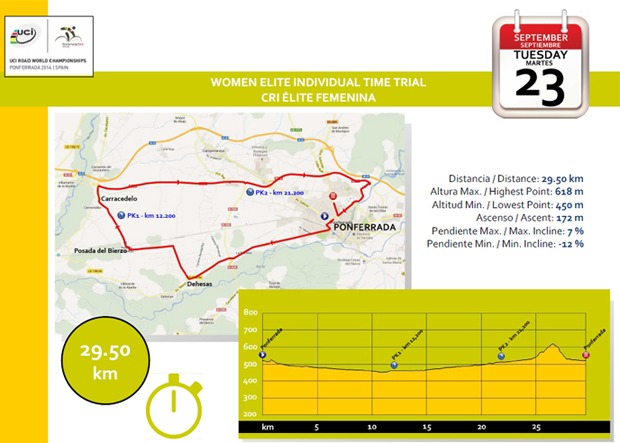 First rider off was Lija Laizane of Latvia, not surprisingly she was the first to finish and set the best time of 42:23 to take the ‘Hot Seat’ for a little time before Japan’s Mayuko Hagiwara beat her time with 41:18. Out on the course Martina Sablikova (Cze) was doing a storming ride taking the early lead at all the time checks.

Sablikova hammered across the line in an enormous gear for a new best time 40:13, she is a multi-champion speed skater and came into cycling for training, today she wasn’t training.

At this point it was looking like Sablikova would be in the leaders chair for quite a time, although USA’s Alison Powers was up on the Czech rider at the time checks, although she was behind on the TV GPS as Canada’s Karol-Ann Canuel and Germany’s Mieke Kroeger were also pushing hard.

Powers moved into the lead by 11 seconds (40:02), she was soon followed by Chantal Blaak (Ned) who came in with a time of 40:23 which was good enough for third at that moment. Canuel was still pressing on an enormous gear and had moved into second place at the last check-point. 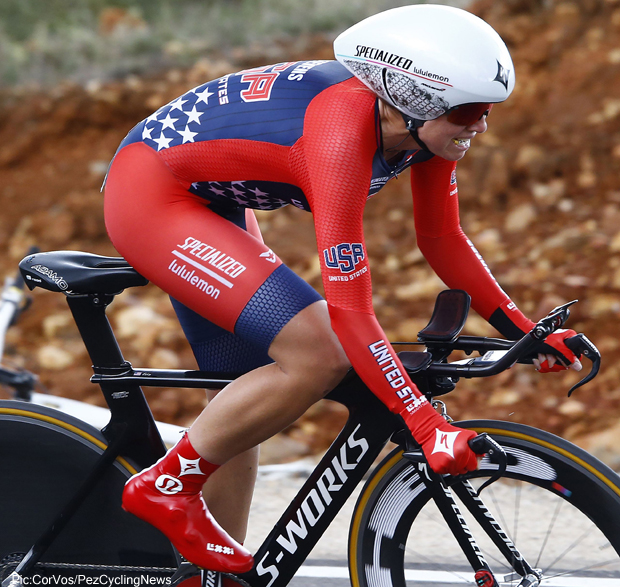 A solid ride from Evelyn Stevens (USA) for third

Kroeger flew up the final stretch for a new best time of 39:26, she collapsed as soon as she crossed the line and had to be helped to the ‘Hot Seat’ to recover. Canadian Canuel crossed the line in for second.

The last riders off were Lisa Brennauer (Ger), Linda Melanie Villumsen (NZ) and Ellen van Dijk (Ned) and the rain had started to fall, but not as heavy as the previous day’s men’s under 23 race, yet. At the 1st time check (12.2); Anna Solovey (Ukr) had the fastest time, but was pushed close by the next rider Evelyn Stevens (USA). 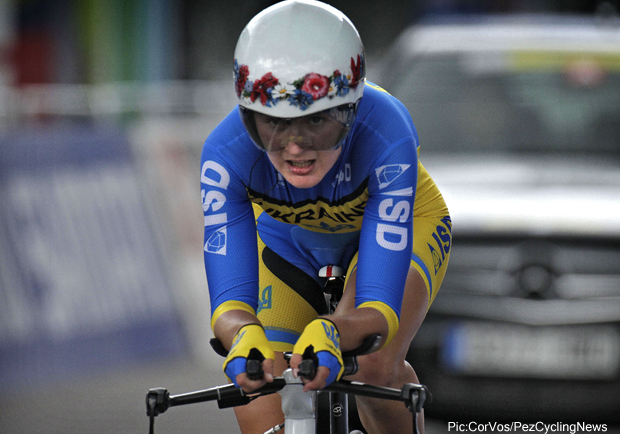 All the riders had passed the 1st check and Solovey was the fastest, but only by a shade of a second from the last rider off Ellen van Dijk.

At the 2nd check (21.2) Solovey was again the fastest with 27:22 with Van Dijke dropping to 7th with her time of 27:40, Brennauer was second fastest and speeding up.

Anna Solovey hammered it up to the line for the new fastest time of 39:06, pushing everyone down the ranking. Next in was Evelyn Steven for second place and we didn’t have to wait long for Lisa Brennauer to fly in with a great time of 38:48. 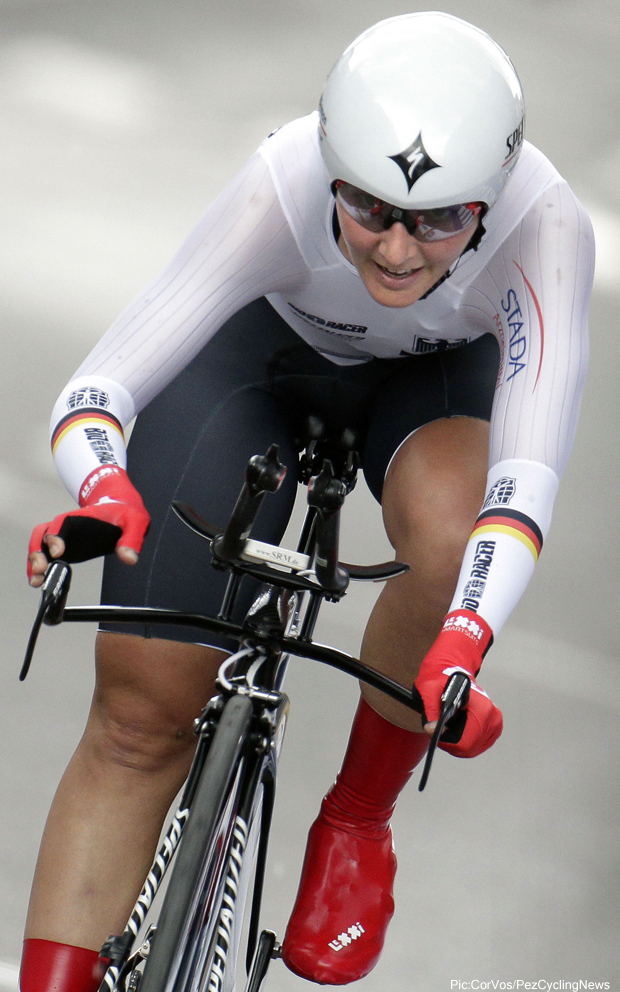 For the last two riders the rain started to batter down, bouncing off the road causing Van Dijke to slow, not taking any chances on the last bends to finish in 39:59 for 7th place.

Lisa Brennauer of Germany is the new Women’s World time trial champion to go along with the Gold medal she won as part of the Specialized-lululemon team time trial squad on Sunday: “I can’t believe it right now, but I had a good day and I gave it all on the hill and the descent and then full gas to the finish.” 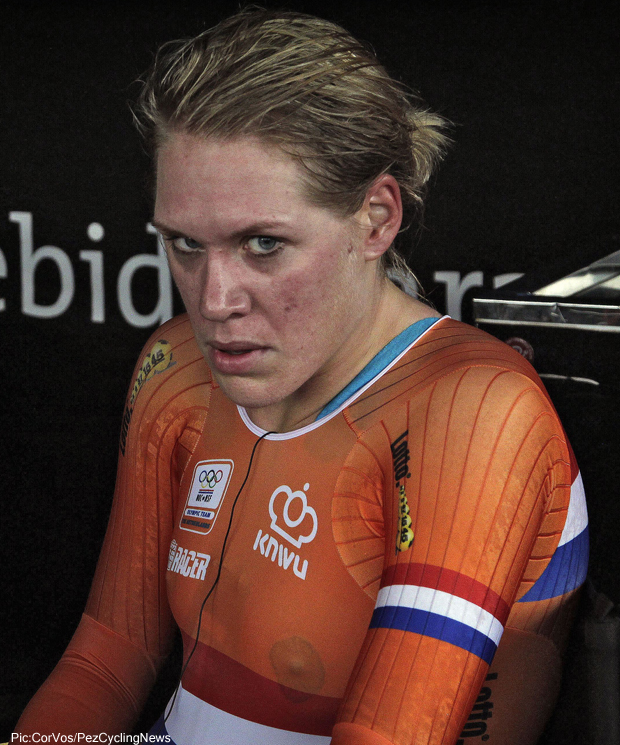