It was a slow boiler but thanks to some rain and cobbles it was a spectacular finish to the U23 World Champs. Jose Luis Rodriguez (Chile), Eddie Dunbar (Ireland), Davide Martinelli (Italy) and Max Schachmann (Germany) put in a concerted breakaway effort on the heavy Richmond circuit but they were brought back with 2 laps to go to set up a sensational finish. The marquee climb on the course, Libby Hill, killed the hopes of many riders as a crash on the wet cobbles brought down a large group of riders. Ledanois charged over the top and elbowed his way past Italy’s Davide Martinelli to storm to a 10 second lead into the final kilometre. The win looked like a lock, but a late charge by the Italian Simone Consonni forced a nail-biting finale. 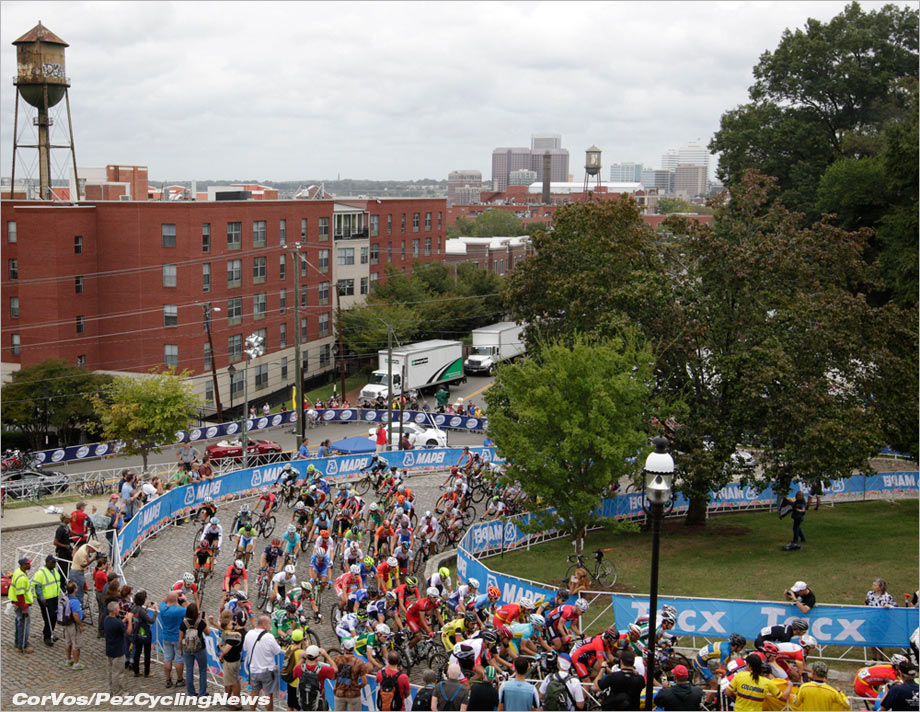 Libby Hill proved a formidable obstacle with it’s steep pitches, but got even worse when the rain and fatigue set in for the finale.

Route
The U23 men faced 10 laps of the 16.2km circuit – predominantly flat with 3 short steep climbs, including the cobbled Libby Hill, all in the final 4km of the circuit. It didn’t look particularly challenging on the profile but after 10 laps and more than 1000m of elevation there was a huge amount of suffering. The wide boulevards favoured a large group but believe me, 10 times up Libby Hill took it’s toll. 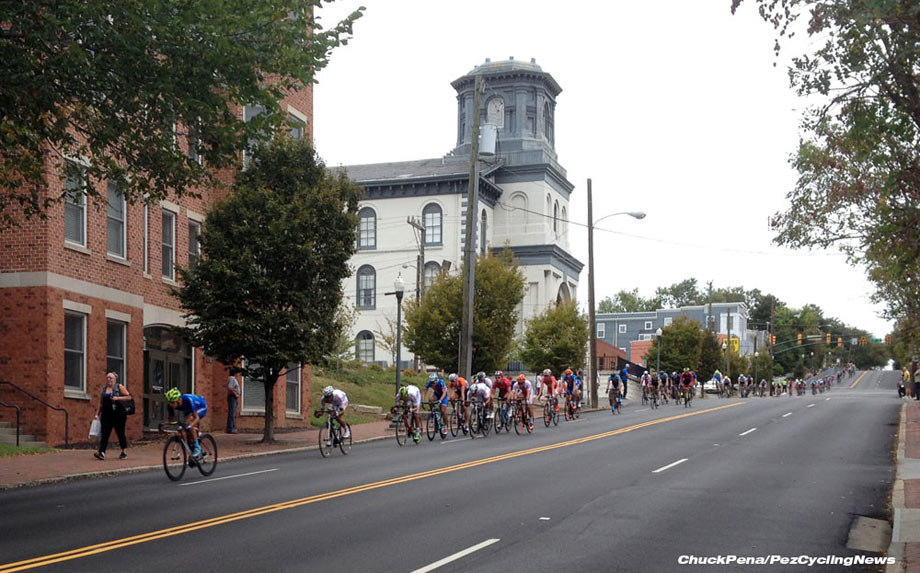 The Exuberance of Youth
A 9 man group featuring Jose Luis Rodriguez (Chile), Eddie Dunbar (Ireland’s lone U23 rider), Gregory Daniel (USA), Stepan Astafyev (Kazakhstan), Amanuel Ghebreigzabheir (Eritrea), Jean Bosco Insengiyumva (Rwanda), Wilmar Paredes (Colombia), Adil Barbari (Algeria) and Joao Rodrigues (Portugal) went away early on and built a lead of under 1 minute. It was short lived though as on the third climb of Libby Hill Dunbar forced the pace and only Luis Rodriguez was able to follow. The peloton weren’t letting it go though and with 100km to go the gap still hadn’t been allowed to extend above a minute. This tiny advantage allowed Davide Martinelli (Italy) to jump over but he was playing the loyal team mate card and he refused to help out the leading duo.

The relentless pace in the peloton eased off and the gap grew to more than 2 minutes, the leading trio also became four as Oleg Zemlyakov (Kazakhstan) bridged over. Much to Dunbar’s frustration Martinelli was still refusing to do any work, the Italian was clearly part of a larger plan.

The slowing pace in the main group was an invitation to any potential attackers and it was the German Tony Martin look-a-like Max Schachmann who took advantage. At the halfway point he was lying exactly between the two groups but he was closing fast on the leading quartet.

The Danes Mark
The peloton had been content with the make up of the four leaders but once Schachmann linked up with them it removed the requirement for Germany or Italy to chase and that put a lot of pressure on the smaller nations. One of them was Denmark who had, arguably, the favourite for the race in Søren Kragh Andersen. They weren’t happy with the 2 minute lead and set about eating into it with just 60km left to go. They brought the lead down to a little over 1 minute but that was the sign for Martinelli to finally, finally, start working.

At the foot of the third from last climb of Libby Hill it was Martinelli who increased the pace and it was too much for Dunbar, who had done so much work earlier. The Irishman fell away, never to make contact again, and as the peloton crossed the line just 60 seconds back the pace was cranking up and up. The first attackers were Patrick Muller (Switzerland) and Mads Scmidt (Denmark). That attack was short lived though and it was the pace making of France, Norway and the Czech Republic that was responsible for the ever dwindling lead of the quartet. 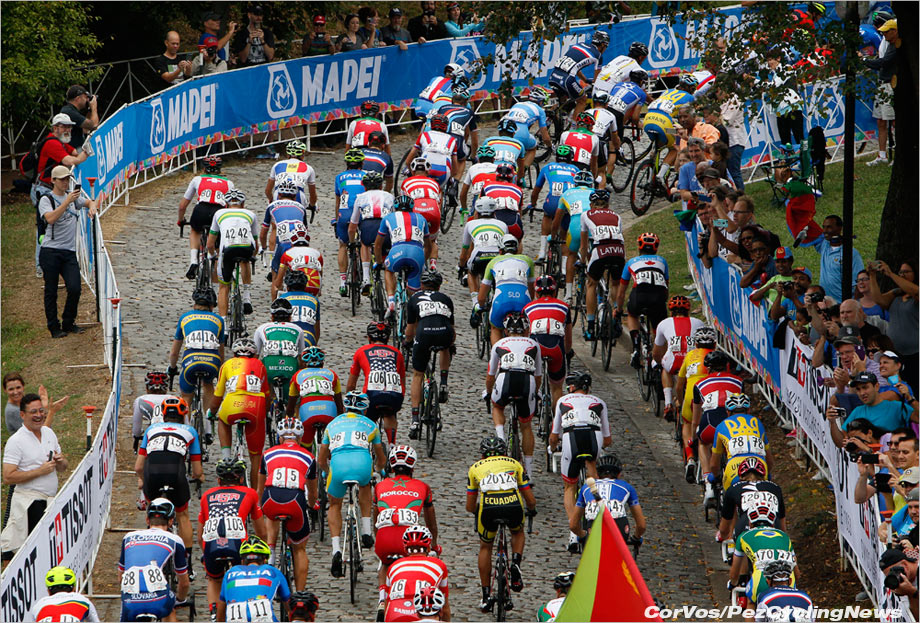 With 35km Martinelli attacked hard at the bottom of Libby Hill – but suffered a mechanical that locked him out of his big chainring. He was mopped up and the pace was so high that it was only going to be a matter of time until the leading trio were brought back into line. With 2 laps to go the ride of the race was being done by Jose Luis Rodriguez who had been in the break from the very beginning and was still offering plenty of power to the leaders.

25km to go and the trio only had a lead of 20 seconds but they’d kept that same gap for the past 7km. The teams of France and Italy were increasing the speed but at the moment the German, Chilean and Kazakh were matching it. The soon to be Sky rider Tao Geoghegan Hart was doing all the work for Owain Doull but even this wasn’t enough to make any impact on the break as they hit Libby Hill for the penultimate time. The cobbled climb was the final nail in the break’s coffin and after a late burst by Rodriguez, who’d been in the lead for the best part of 140km, it was all together.

The Final 20km
Søren Kragh Andersen was the first rider to go clear on the last climbs on the course and he reached the start/finish alone and took a 15 second lead into the final lap. Behind him there were almost no teams with more than one rider and the Giant Alpecin bound Dane was flying. The effort was too much and he was pulled back with 13km left. The massed ranks of Italy were leading the peloton with four riders but the Dutch and Belgian teams were also starting to mob the front. There was a more surprising sight as four members of the Austrian team were taking over the pace making with the USA also in close attendance.

10km to go and the rain, which had been threatening for the last few hours, started to fall. Great Britain were also increasing the pace as the gaps started to appear on the technical mid section of the course. These corners were enough to launch a trio containing the unexpected Martinelli. 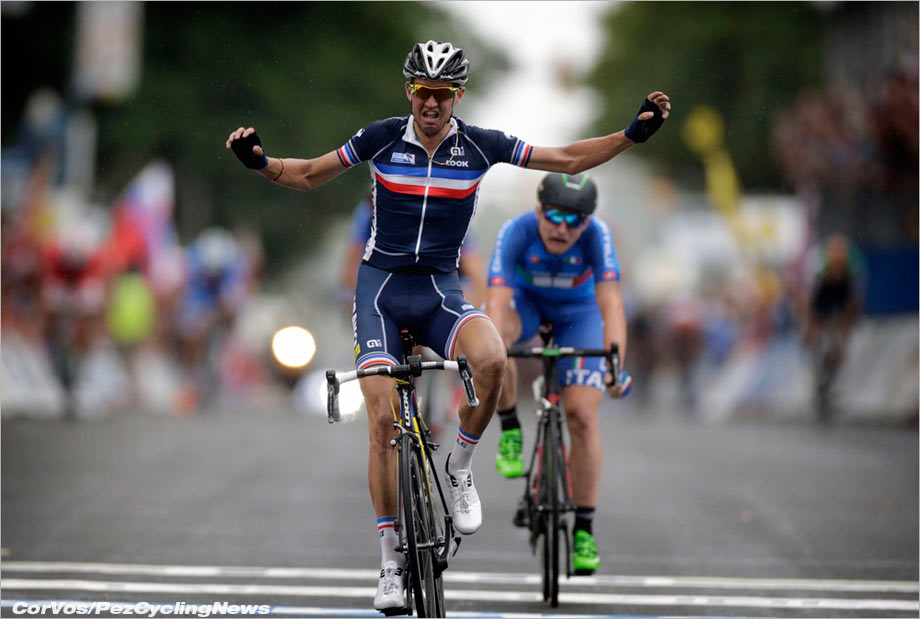 The climb of Libby Hill on the wet cobbles destroyed most of the remaining peloton and Kevin Ledanois (France) found his way to the front with 2km left to go. He was in hell but it was a hell that was taking him to the rainbow bands. Inside the final 1km and he had a 10 second leader over a Danish led chasing group. Ledanois was dying, but he had a good lead with 500m to go. Italy with Bellerini had left it too late to bring back the Frenchman who was grinding up to the finish as his lead dwindled. A fierce chase from the Italian Consonni, and fierce dig from the Frenchman, the gap melted to nothing but it was Ledanois by a whisker! Anthony Turgis took third to cap off a perfect day for the French.