Race Report: On a day when the pundits – including this one – got it all wrong it was 34 year-old veteran Belorusan Sky stalwart Vasil Kiryienka who pulled on the rainbow jersey, besting ever-improving Italian chronoman, Adriano Malori by nine seconds and French shock bronze medallist Jerome Coppel by 26 seconds.

One of the sport’s hardest working domestiques there will be few who grudge the man his jersey on a day when it all went wrong for the favourites. . .

The parcours?
We’ve got 53.5 kilometres with 245 metres of elevation change, the organisers describe it thus: ‘The Elite Men will begin their “race of truth” 20 miles north of Richmond at Kings Dominion, Virginia’s premier amusement park in Hanover County. Racers will then speed past Meadow Event Park, home to the State Fair of Virginia and birthplace of thoroughbred racing legend Secretariat. Racers will head south on long, open straights past the Hanover County Courthouse, the third oldest courthouse still in use in the U.S. and dating back to about 1740. Long hills on Brook and Wilkinson roads bring the racers back into the city through Virginia Union University before turning into downtown. Nearly half the turns of the entire route fall within the closing kilometres, the second to last of which is onto the 300-meter-long climb up Governor Street. At the top, riders turn left and finally face a false flat 680 meters to the finish.’

And let’s get straight to the point – Rohan Dennis (BMC & Australia) to win from Tom Dumoulin (Giant-Alpecin & The Netherlands) with Tony Martin (Etixx – Quick-Step & Germany) third.

First on the ramp is track star and former Aussie TT Champion, Michel Hepburn, strange when you think that we have riders from Qatar and Ecuador. . . Hepburn strokes it out on wide, smooth, dry US tarmac after a brief opening section on good old fashioned bricks – it’s a tail wind out there on a more or less straight out course so it might be very quick today.

Estonia’s Rein Taaramae is the next ‘name’ but perhaps not low enough on that Specialized Shiv – home boy Ryan Roth has no such problems, rolled up in a ball on that Argon and a man who’s won the cult Tro Bro Leon on the ribinou – dirt tracks – of Brittany. 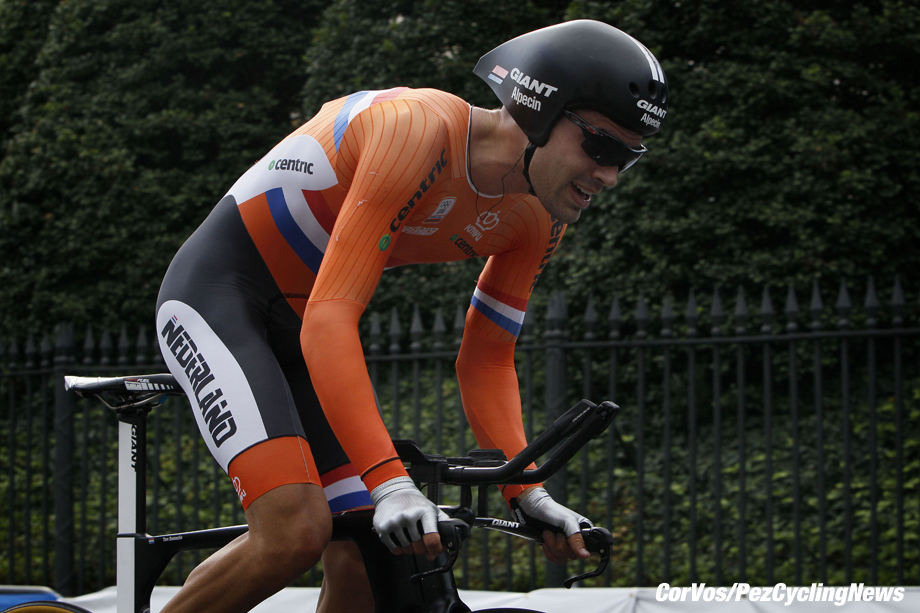 Not a great day for Tom Dumoulin

Word is that Dumoulin has pulled a muscle – Tony Martin moves to second in my form book in that case. Rasmus Quaade is a specialist he’s been Danish and European Champion and runner-up in the U23 Worlds – he’s a power house and this course will suit him.

Out on the parcours former U23 World Champion, Frenchman Romain Sicard looks good over the ground but it depends on the gear – good cadence doesn’t always mean high speed. Big Steve Cummings rolls for GB, he could go well on this course but he may well be tired from the Tour and Vuelta – the first check will tell us. 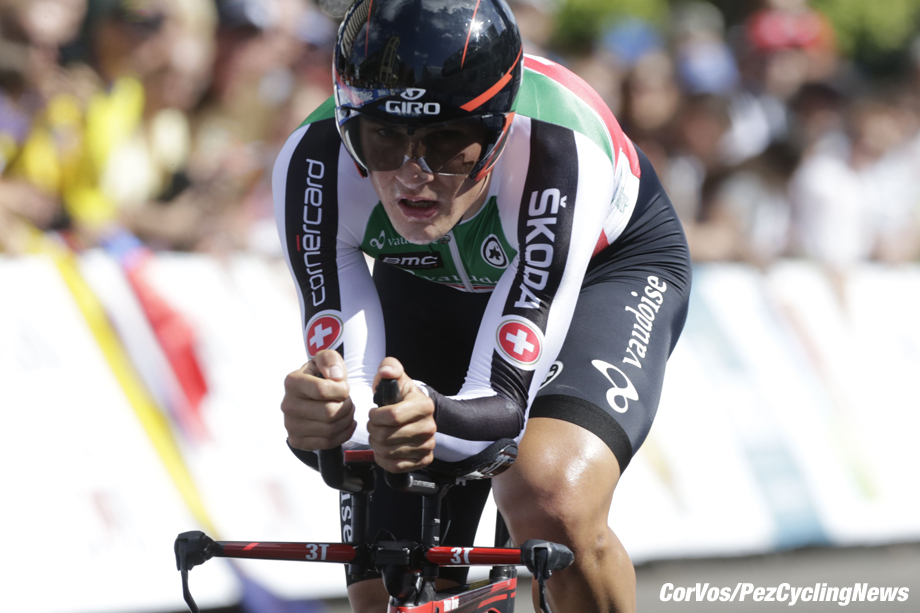 Sivan Dillier (Suisse) is next, he was BMC’s hero in the TTT, he simply HAD to hold on to the other three as Kung and Quinziato both ‘popped’ and the time is on fourth man. Marcin Bialoblocki won the TT in his home Tour of Poland – but we’ve heard stories that the time keepers were ‘kind to him’ that day.

Quuade is bludgeoning his bike out there with that physical style of his; it’ll be interesting to see his first split against Hepburn who continues to lead at check one – and he’s down on the Aussie. But it looks lonely out on those wide Virginian highways with ne’er a spectator in sight.

Luke Durbridge is a former World U23 TT winner but that’s history and there’ll be no medal today – Steve Cummings is looking good on that Cervelo as he flows through lovely green forests which haven’t yet started to turn to their autumn colours; but those watches don’t lie and Steve is off the pace at check one.

Gustav Larsson launches for Sweden; he used to be a big TT gun with a Giro chrono win and an Olympic medal – but those days are gone and top ten will be a good ride. Hepburn comes home, wasted – 1:04:28 with 49 plus kph, it’s a quick day. Kangert fires off for Estonia as Saramontins comes home for Latvia, second but a minute and more down on Hepburn.

Our TV producer likes big Durbridge – the Aussie looks the part, smooth, flat backed, a proper ‘tester.’ Roth comes home; well down on Hepburn as we hear that Steve Cummings is closing the gap on the Aussie at check three. Romandie winner, Zakarin of Russia misses the mark, Quaade too; whilst Van Den Broeck is on the course for Belgium – he was a world TT champion as a junior.

And now, a man who could make the podium, Taylor Phinney who’s already got a world title under his belt in the TTT – being able to live with Dennis and Oss says much about his form. His time at check one will be the next benchmark – he looks impressive, back flat, good cadence, straight and true on the tar.

Chunky Czech champ Jan Barta launches, then Alex Dowsett, ‘de Brit’ – as they say in Flanders – is national champion and his TT stage win took him to the GC win in the 2015 Bayern Rundfahrt, not to mention a successful hour record ride. 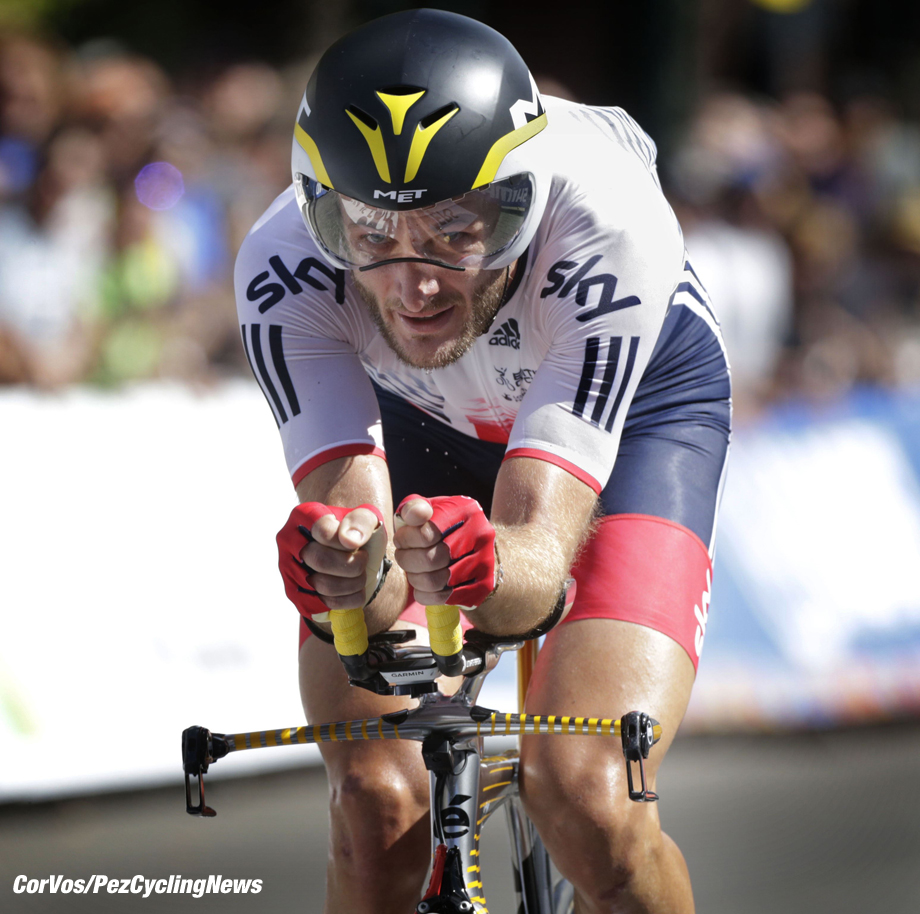 Cummings was the best finisher for Britain

Cummings goes top by a whisker but not for long as Bialoblocki cracks the four minute barrier catching Dillier en route – maybe those stories of time keeper ‘favours’ in Poland are just scuttlebutt?

Adriano Malori off the ramp, it’s his kind of course – national champ and TT wins in San Luis, Tirreno, the Sarthe and Poitou-Charantes – he’s for real. My tip, Dennis is next with a spell in yellow after the fastest-ever Tour TT – including prologues – and a world championship in the TTT already in the bag.

Kiryienka (Belarus) next; he was third last year and he won the Giro TT – but he’ll be tired, it’s been a long season. Vuelta hero and TT winner Dumoulin now, if he’s not in A1 shape then he can’t win a medal – it’s that simple. . . 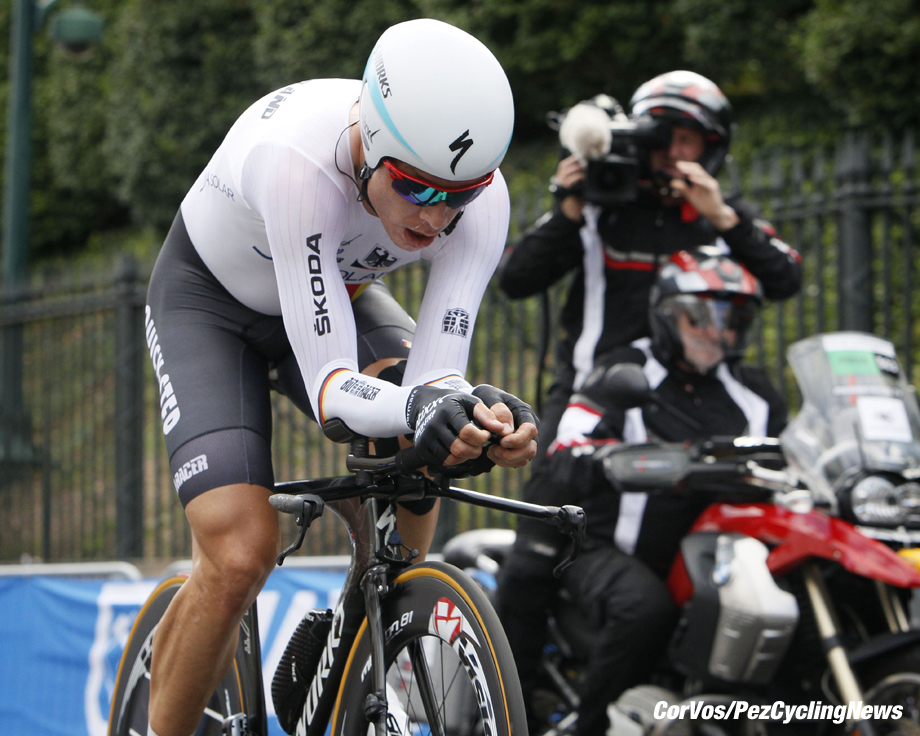 Tony Martin off the podium

Martin looks jumpy on the ramp, that’s a good sign, three world titles under his belt and roads to suit that 58 ring of his; the ‘Bigs’ are all mobile – let battle commence. Further up the road, Phinney is up on Bialoblocki, the Pole is ‘surprise of the day’ albeit he’s been around a long time and won a many a bike race including the Ras in Ireland and this year’s Polish TT champs. Phinney is chewing up the tar but not topping the splits.

But IAM’s Frenchman Jerome Coppel is posting some nice splits out there – a real surprise. Spanish chronoman and Dowsett’s Movistar team mate, Jonathan Castroivejo is also going well as we hear that Skyman Kiryienka is top at check one. . .

And word is that Chrono King Martin is 10 seconds off leader Kiryienka at check one but there’s a long way to go, still. Castroviejo is riding low and strong but still Bialoblocki leads – however . . . Coppel has bested him by 1:12 at check three. Kiryienka too is flying, leading at check two by 24 seconds the watches tell us.

It would be real nice if we could get images of the leaders from the TV producers as we see Phinney pass, way down on Coppel at check three. Dennis has to change bikes – disastrous but he keeps his cool. This race is just not running to script, a bike change for the favourite and a flying Frenchman. . .

Dowsett is out of it, as is Uran; and finally, we see Kiryienka on our monitor – smooth, very smooth. 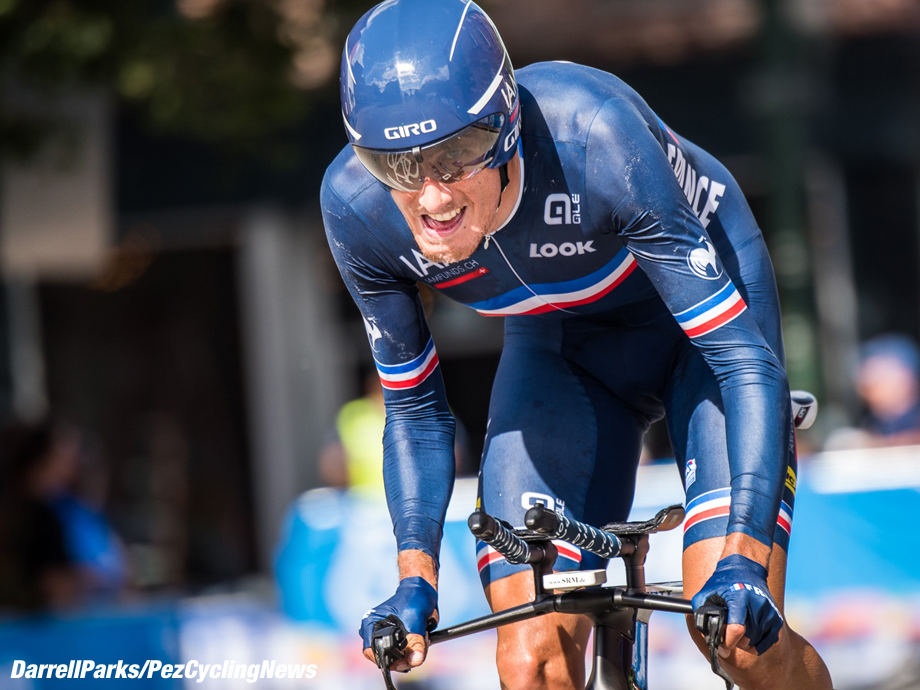 Coppel in the finish straight, it’ll be a 1:2, a 2:56 in fact to lead by almost a minute @ 51 kph – beautiful ride. It’s not Dumoulin’s day and Castroviejo is fading just a little as Dennis battles on.
Kiryienka is off the tri-bars, why?

Has he ‘popped’ or just catching his breath for that horrible finish ?

We’ve not seen Malori but the splits look good for him as Kiryienka heads into the finale some 19 seconds up on leader Coppel but Malori is closing on the Belorusan as Martin goes through check three waaay down – another one I got wrong. Bodnar goes second for Poland and right behind him it’s Castrviejo who now goes second by a whisker. 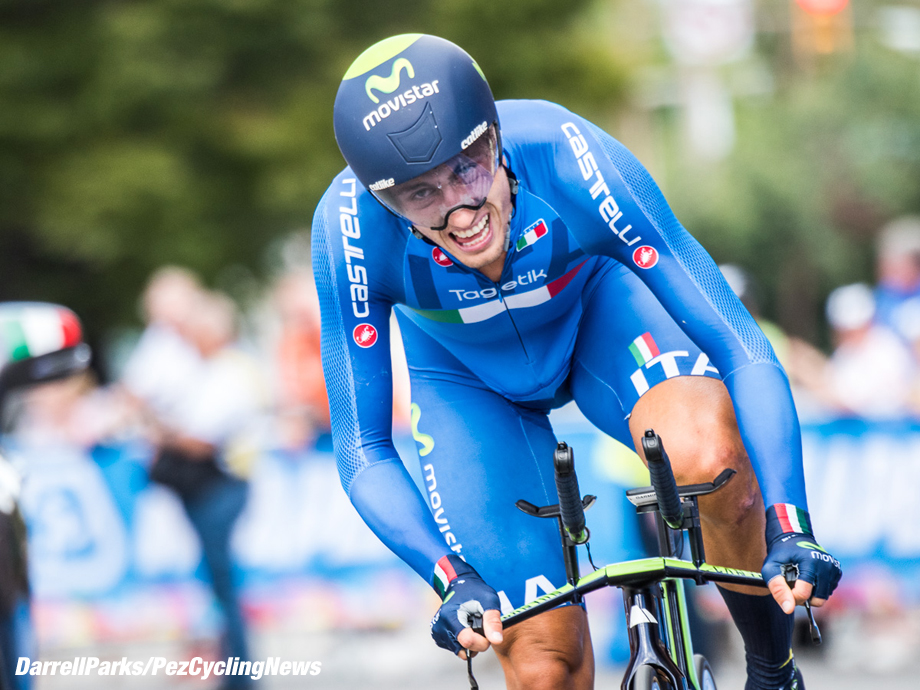 Malori hits the last climb, his legs are screaming, he’s in the finish straight now, shoulders rocking, face a mask of pain, bouncing over potholes – TOP by 17 seconds. Dennis now, well off it – a minute down, glad I didn’t go to the bookies! 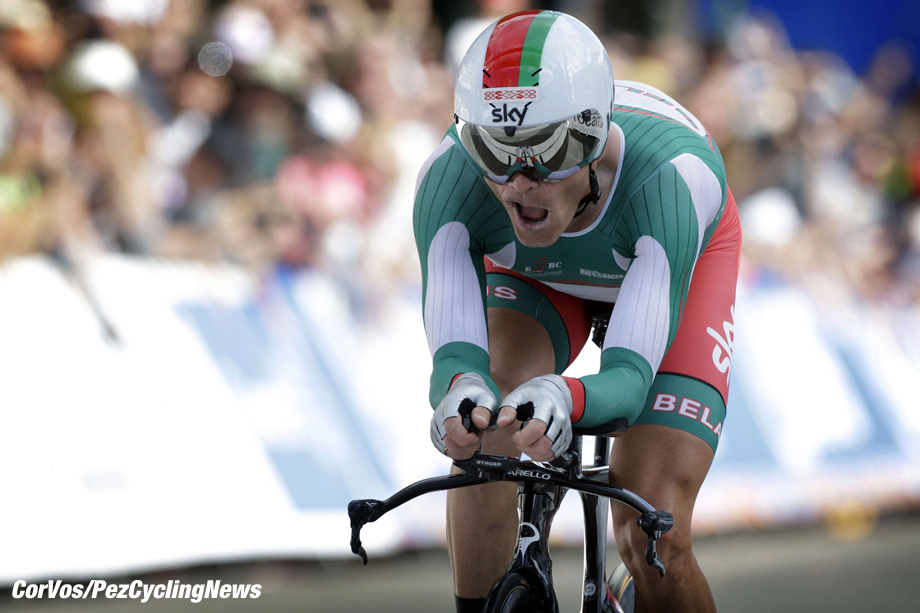 Dumoulin pumps the last climb and tackles that horrible long finish straight for a fourth spot. Just Martin to come but it’s not his day – seventh.

A great race – if you’d got that top three right at the bookies, you could retire. Will Sunday be the same race of surprises?

Keep it PEZZED for all the road race events in Richmond. 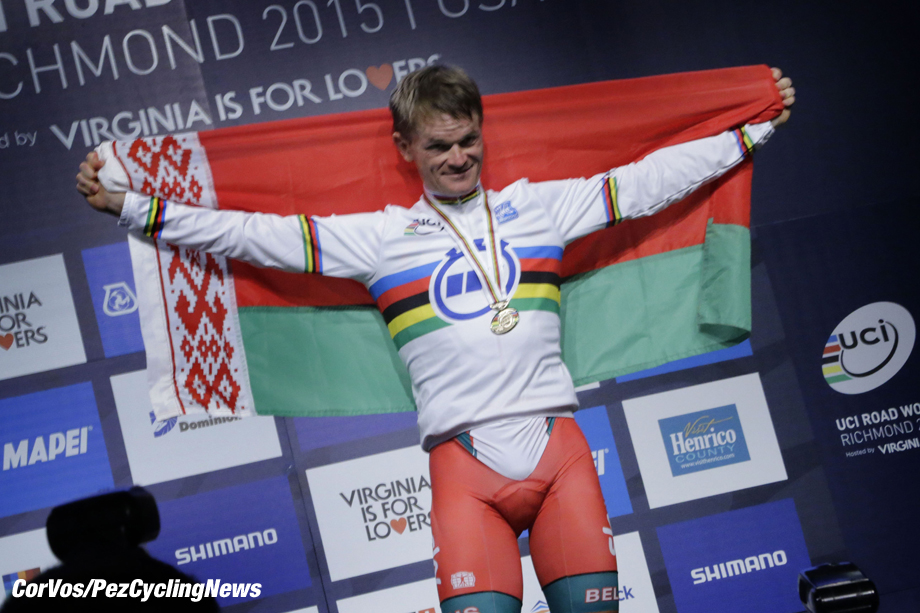