Race Report: With a text book late move Slovakia’s charismatic Peter Sagan was crowned champion of the world after an exciting and savage finale in Richmond, Virginia. Invisible until one ‘minute to midnight’ he made his move on the steep cobbles of 23rd Street and once he was alone, he was gone – despite a desperate peloton on his heels all along the finish straight. 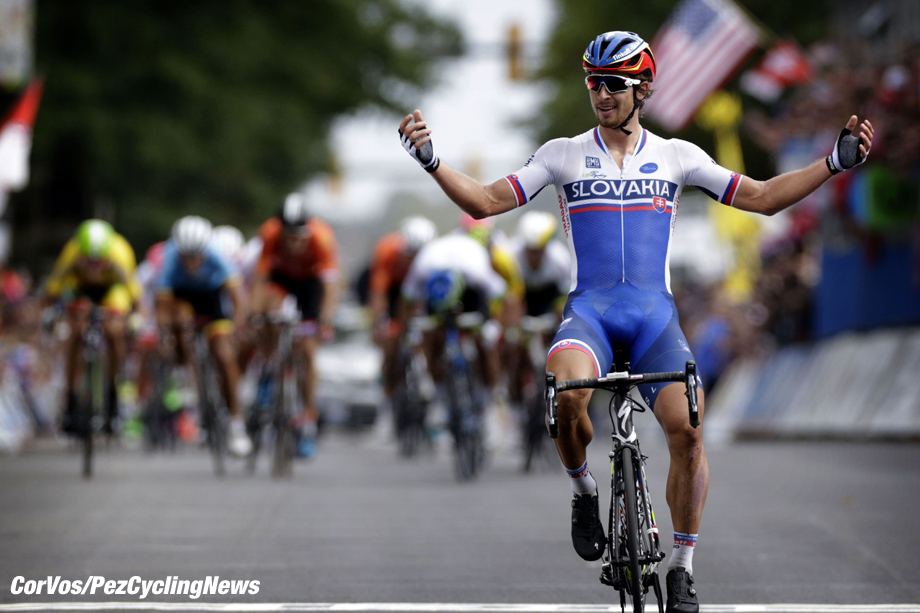 His victory salute said it all; ‘Hey! How about that?’

Australian youngster Michael Matthews was ‘best of the rest’ ahead of Lithuania’s big Ramunas Navardauskus. It was worth the six-and-a-quarter hour wait . . . 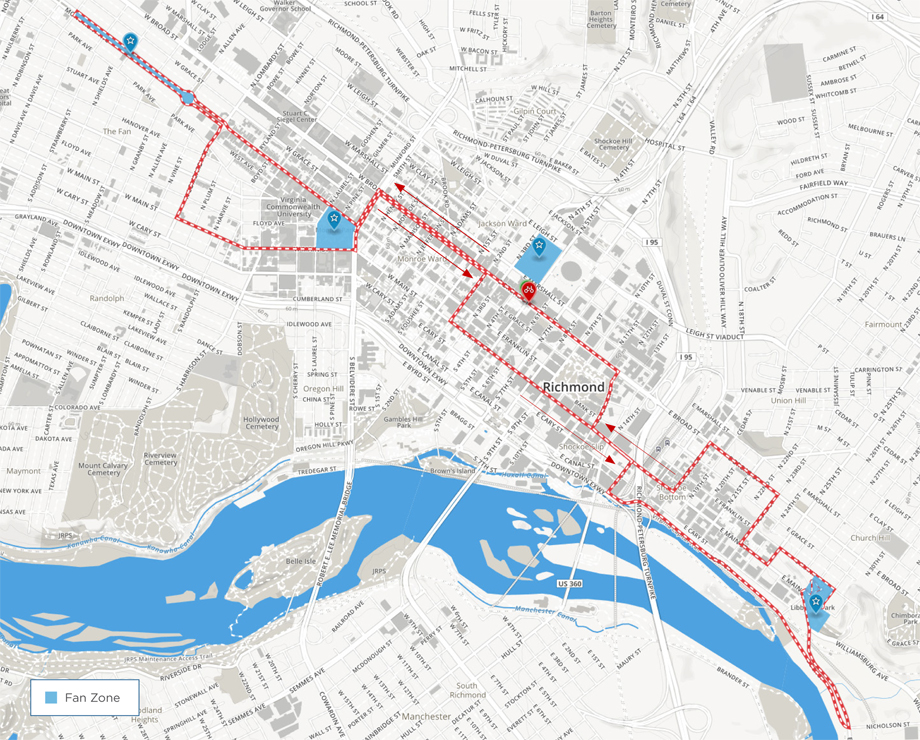 It’s 14:00 GMT and Spain lead off as UCi number one ranked team; we have six-and-a-half hours ahead of us – as soon as that commissar’s car accelerates the first kamikaze will head off into the southern greenery before we head back into the city centre for 16 laps of a tough, unforgiving 16 K urban circuit. Conor Dunne is first away for the Emerald Isle as others bridge across, we’ll wait ‘til it gels before we list names – OK, they have daylight: Andriy Khripta (Ukraine), Jesse Sergent (New Zealand), Ivan Stevic (Serbia), Park Sung Baek (Korea) and Mr. Dunne.

We caught up with the big Irish bhoy last season, you can see what he had to say here.

And now another three bridge; Sergei Tvetcov (Romania), Ben King (USA) and Carlos Alzate (Colombia) – that’s eight up front and the gap is yawning out over a pedestrian peloton. 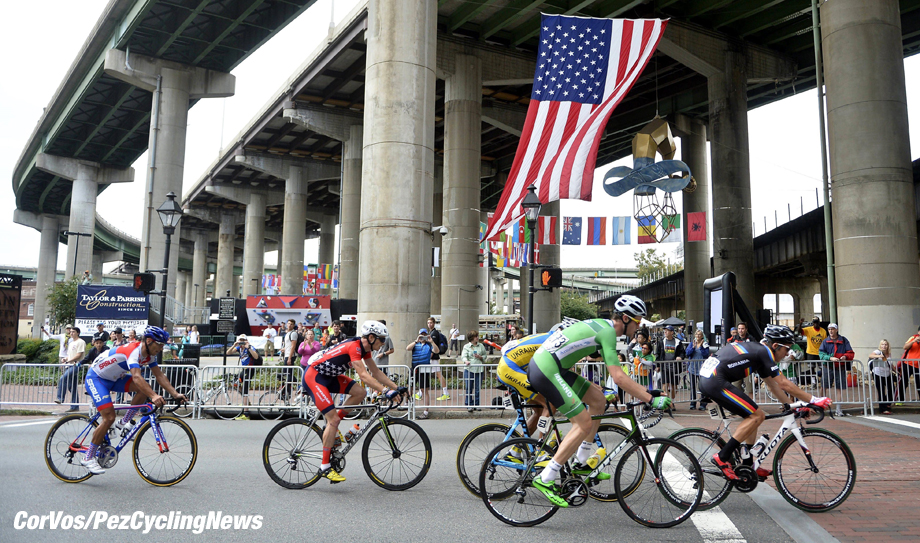 Let’s have a look one or two of the guys in the break; Tvetcov is Romanian TT and road race champion, he rode the Giro this year for Androni after two seasons with Jelly Belly in the US where he had some nice wins – like the GC in the Cascades. The Netherlands are tapping tempo on the front to stop the gap getting out of hand – five minutes is as far as it will go.

Two laps in; Jesse Sergent is a former World Junior Team Pursuit Champion, his skills as a ‘chronoman’ have taken him to GC wins in the West Flanders Three Day and Tour of Poitou-Charentes; his best ride this year was as part of the winning team in the Tour of Alberta team time trial. The Netherlands still tap it out – Terpstra has to be their man.

Ivan Stevic is Serbian and Balkans Champion; he had a spell in the USA with Toyota where he notched a few wins in races like Tulsa Tough.

Inside 200K now as Tom Boonen has to change a wheel – he’s back on in less time than it takes to write, he has GOOD legs this day.

Ben King is reigning US Elite TT Champion and is a former US Elite road race champion, he also had a nice win in a Criterium International stage, this year – it wouldn’t be right if there wasn’t a Home Boy in the break of the day.

That’s them inside 160K now – 100 miles – Carlos Alzate rides in the US for United Healthcare and is a ‘crit king’ – these parcours suit him but wearing-on for seven hours at 40 kph+ won’t. The bunch looks impressive streaming up cobbled Libby Hill through a good, enthusiastic crowd and the pace is a little bit nippier now, the peloton in a long line as it hits the finish just over a minute back on the escapees.

The Germans lead over the cobbles on the ramps – just keeping clear of trouble more than forcing it but it all does look much more serious even though we have 130K to go.

We’re down to six up front now, the Ukrainian and Korean have ‘popped’ as Virginian Ben King leads them through the finish with eight laps to go and the gap at two minutes – no point in bringing them back too quickly. The Netherlands are back on point with that man Jos Van Emden doing the lion’s share – he’ll sleep this night.

Norway, Poland, Italia all showing face up front now with the Belgian’s keeping well out of trouble on the cobbled ramps. The Spaniards are even showing face; no show boating from them though as Stevic pops and gives the finish line crowd a bow and a wave – and ‘then there were five’ with seven to go and the bunch barrier to barrier @ 2:15. 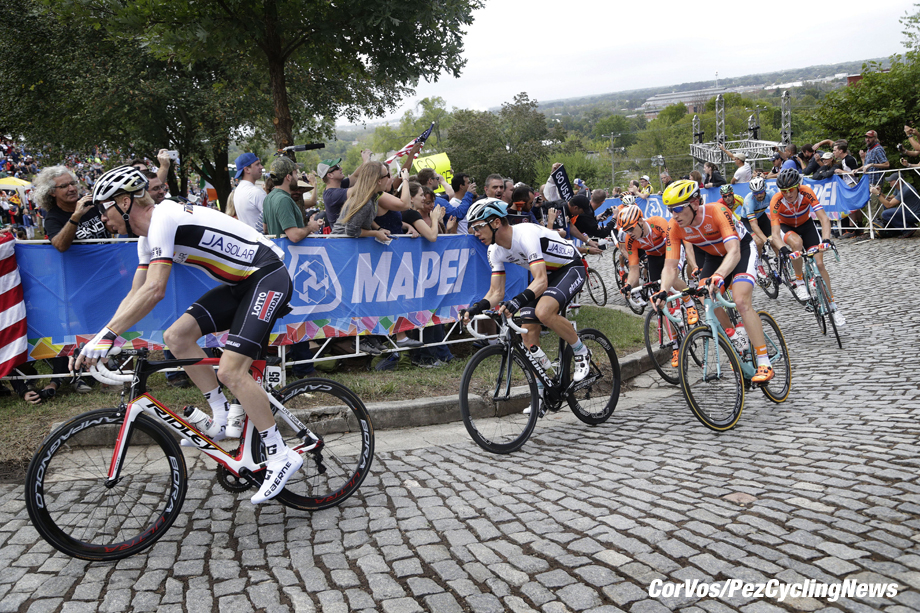 Van Emden with the German chase

Van Emden again takes up the cudgels with four Poles in close attendance and GB there too – these teams appearing at the front is more of an exercise in staying out of trouble on the ramps than any intent to attack. Libby Hill; the break hurts – Majka charges at the head of the peloton with Kwiatkowski on his wheel as the break pass the 100 K to go mark.

The bunch eases, the mad charges into the ramps are simply to avoid that inevitable moment when someone drops a chain or touches a wheel causing mayhem. It’s Alzate’s time to say ‘adieu’ to the break and the four have but 25 seconds on the line – the peloton has split to bits all of a sudden after a spill on the approach to Governor Street.

It’s over for the break and we have maybe 30 riders clear; The Netherlands are driving it but it’s too early, surely? Knees drives group two for Germany with 92K still to ride and the Dutch and big Spaniard Plaza driving group one – but to no avail, it’s merged.

Libby Hill and Belgium take no chances with four or five right up there; then the next ramp, 23rd Street and still the Belgians blast it and again into Governor Street with Gesink jumping them and going clear – why? Big chunk of watts wasted there, Robert. 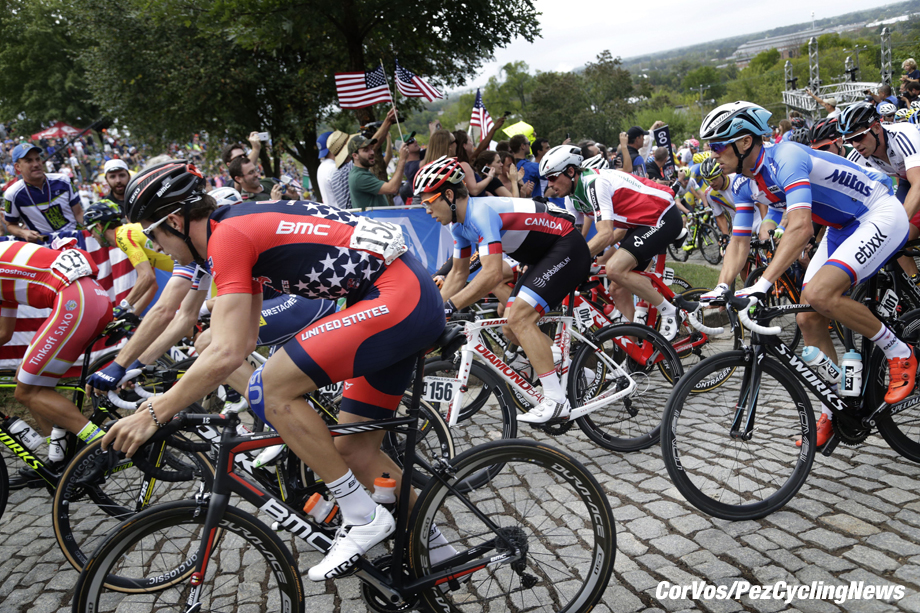 And all of a sudden we have a new break with Guillaume Boivin (Canada), Jarlinson Pantano (Colombia), Taylor Phinney (USA) and Konstantin Siutsou (Belarus) – behind, the peloton is cruising, waiting on the next Light Brigade charge into the ramps.

Phinney drives it up Libby Hill, if he had a chance of being ‘up there’ he’s throwing it away right now – the race is the last lap, not five to go. The next ramp, 23rd Street and Sep Vanmarcke is trying his hard to bridge but to no avail. . .

Just three up front now as Pantano pops, four laps to go – still one lap ‘til the race proper starts. . . 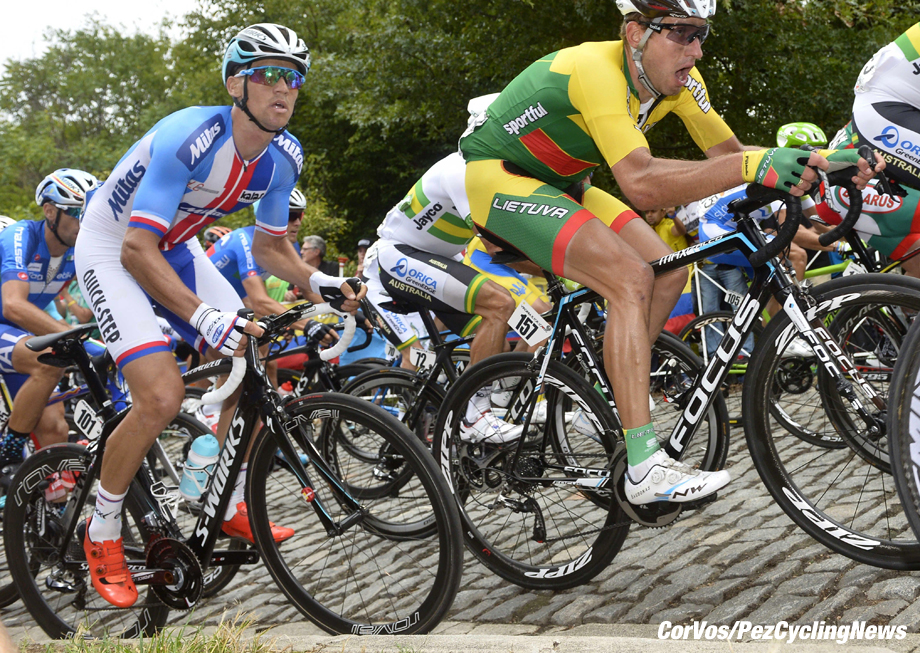 Stybar and Bagdonas put in attacks

The trio have 1:30 with Bagdonas (Lithuania) in No Mans Land and the peloton cruising. Feed zone and a HUGE crash in the peloton with a couple of Spaniards down – there’ll be more of this as riders get more and more tired.

It’s a diminished peloton heading in to Libby Hill and then 23rd Street with the cobbles specialists making merry. The break is on Governor Street coming in to the beginning of the end – the last hour of racing.

The peloton is together, if a tad stretched with lots of faces telling a story of oxygen debts needing repaid after those three nasty ascents. Kreuziger leads the chase for Czech Republic and team mate, Stybar – his bike handling will be a big plus in the melee of the cobbled ramps. Denmark pick it up on the run in to Libby Hill as the break becomes a line in the notebooks.

GB lead the warp drive up the cobbles, it all pauses for drinks, 23rd Street now, Stannard attacks for GB – too soon, too soon.

‘The move’ will not come until the last lap.

Mollema shows on Governor Street and a little group goes clear with him – Moreno (Spain), Viviani (Italy), Boonen, Amador (Costa Rico), Kwiatkowski, Stannard and more with 18 seconds on a German lead peloton. But who’s going to take Viviani to the line?

Mollema will work but he’s not renowned for his tactics – Boonen won’t work, neither will Kwiatkowski – who, it must be said looks very cool. The peloton eases, Germany comes up, so too do the Aussies with Degenkolb and Matthews in mind. 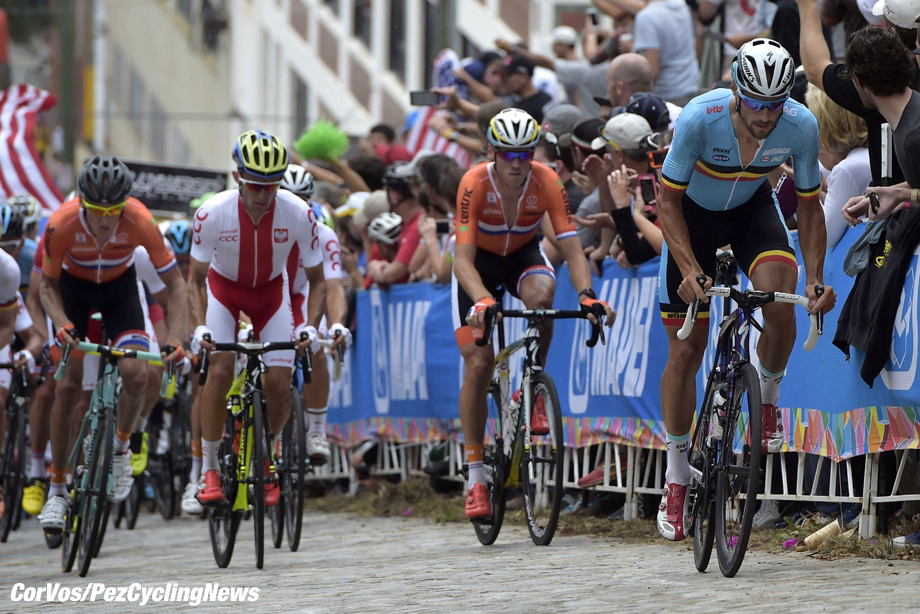 And over 23rd Street it’s almost back together with ones and two getting across to give us a bigger group on Governor Street – as the rest stream up into the finish straight.

The bell and THIS is the race.

Costa takes a stab after the line, Amador comes across, a Belgian – GVA, an Estonian, Brut (Russia) but the huge peloton is alive and eats them up. Italy, Australia, Italia – they take it up, Siutsou attacks, Farrar (USA) counters but there’s little chance this will stick – inside 10 K now as the duo steal a yard at a time.

Hausler, Hansen, Hayman chase for Matthews, inside five miles to go – now the Italians and Belgians pile it on as the two breakaways become history.

Stybar goes full gas on Libby Hill with Degenkolb right there – and Van Avermaet. Over the top the Bigs are all there, Terpstra, Degenkolb, GVA, Boasson Hagen . . . .

And Sagan commits on 23rd Street he’s got a gap, drops off it like a Stuka dive bomber – he’s clear still, bins his bottle, Governor Street, out the saddle, the peloton is in sight, rampant, hungry, he rolls himself in a ball, he’s dieing, but he’s out the saddle again, that straight is sooo long but he’s going to do it – yes, Yes! YES! 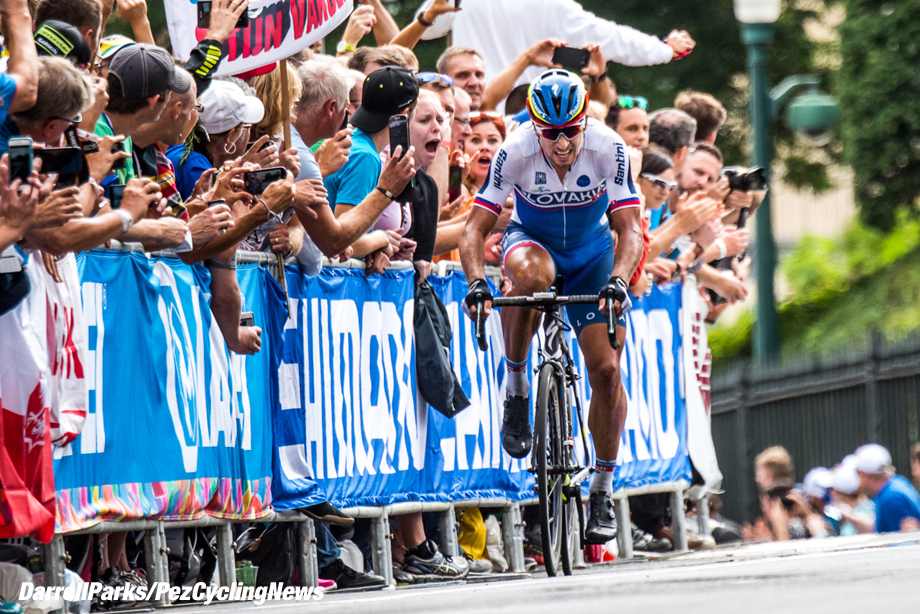 When Peter went, he went for good

Peter Sagan of Slovakia is Champion of the World.